Maxxis has a couple of new tires for the Plus market as well as new sizes  in the popular Minion DHF and DHR2 to address wider rims. Aimed at 35mm internal width hoops, the new 2.5 width WT (Wide Trail) versions are optimized for what is becoming the norm for trail and AM bike rims.When the DHF and the original DHR were introduced even DH rims were narrower than many trail bike rims today, topping out at just over 30mm internal width. 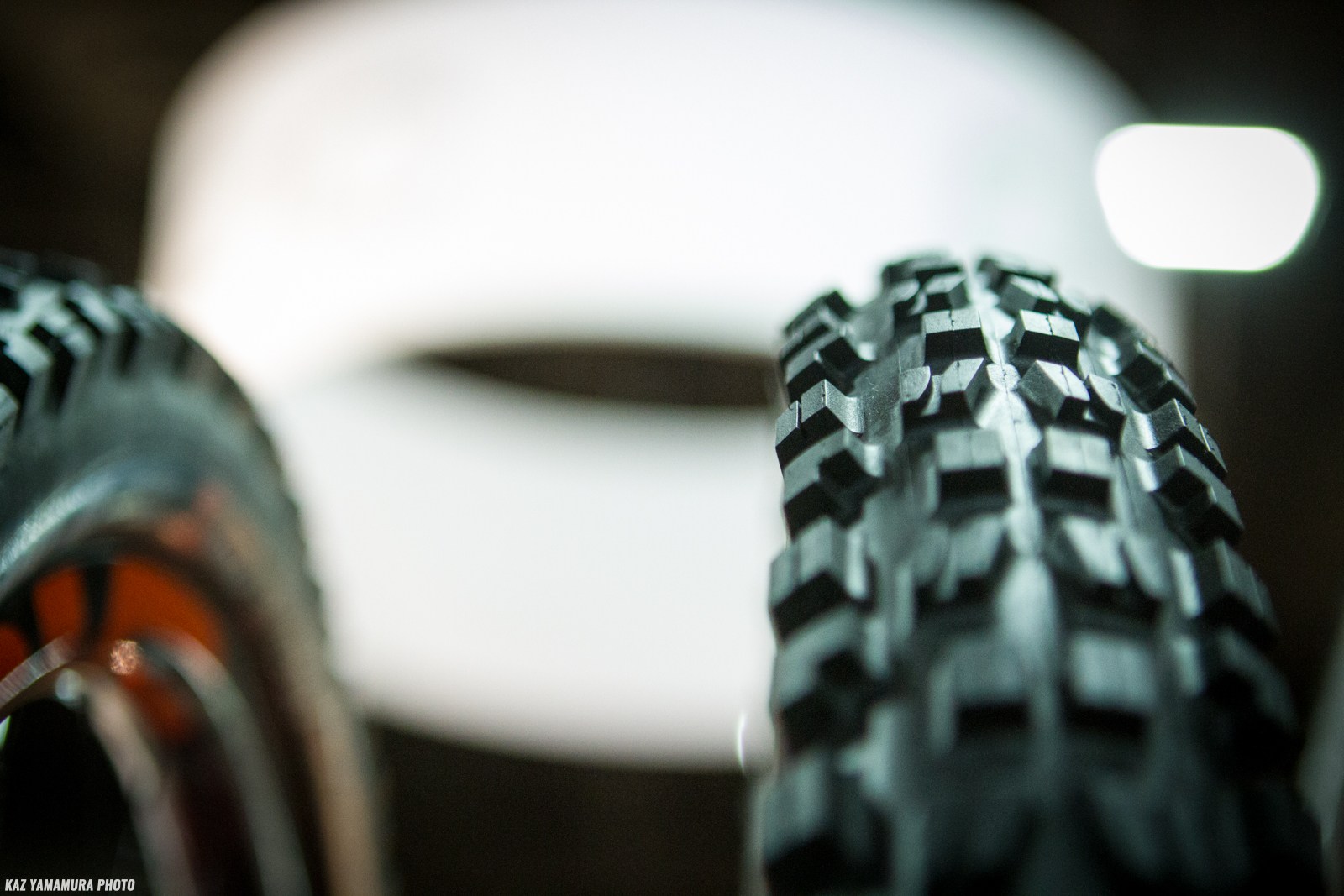 The Minion DHF 2.5 WT. The WT tires are an addition to the line rather than a replacement for certain models.

Carbon construction made wide rims light and strong enough to be practical, and it became clear that there were some advantages in terms of strength, traction, pinch flat resistance, (allowing lower pressures) rigidity and strength. 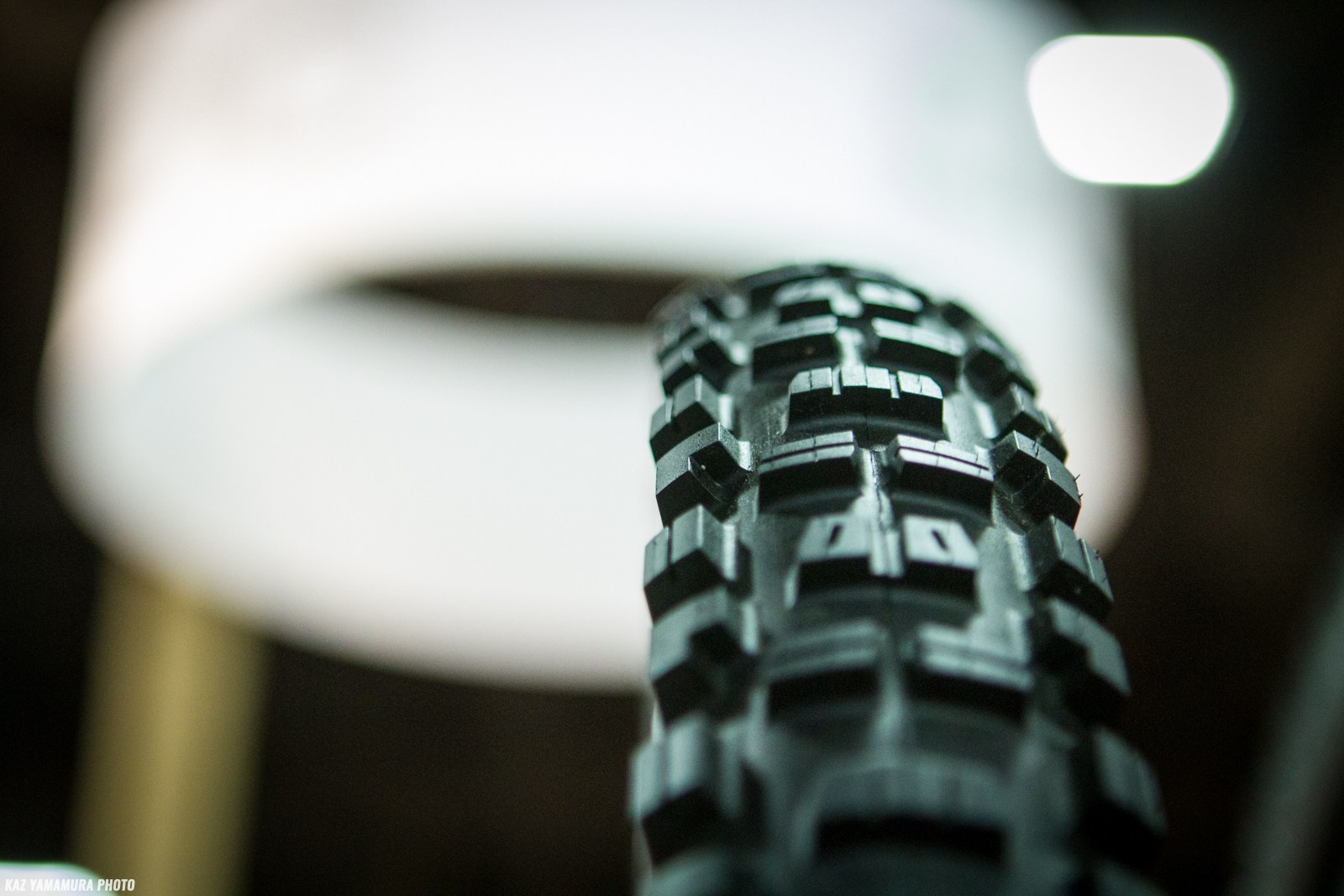 Some of us have noticed some issues with old tire designs mated to new, wide rims, notably increased side knob wear and a higher incidence of sidewall damage. One difference with the WT tires is the that the side knobs are better supported and they seem to be slightly closer to the centre line of the tire, meaning they may bite earlier, before you have the bike leaned over too far, and squirm less. Hopefully this will reduce premature wear as well. 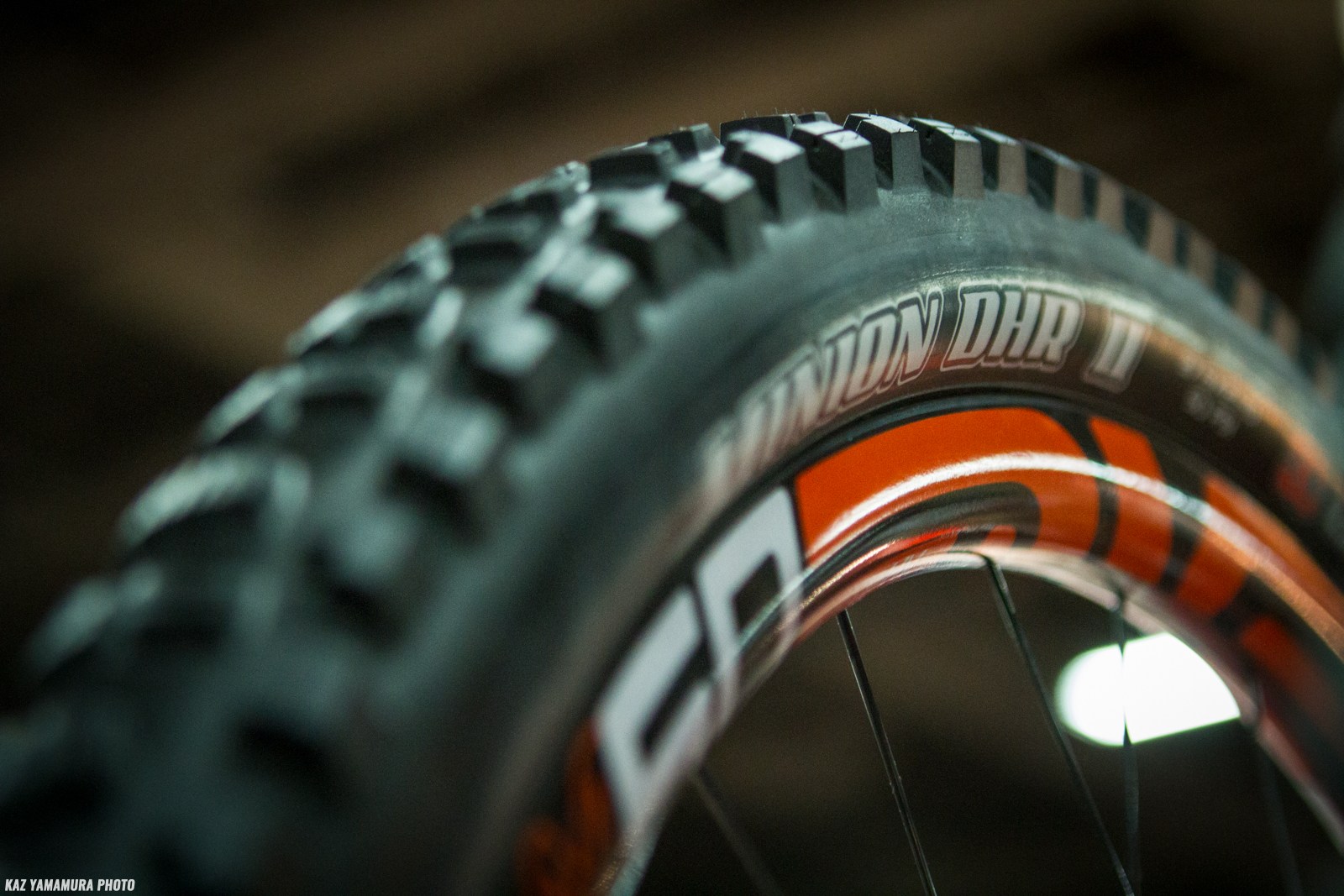 The Minion DHR II 2.5 WT mounted to an ENVE M60 rim. There are two models of M60 and while I didn’t notice which this was, even the widest M60 (The HV model) is 26mm internal width, while the standard M60 is only 23mm – so it was an unusual choice for the display of these tires..

In the end this produces a less rounded profile and a narrower channel between side and centre knobs. In 650b/27.5 both the DHF and DHR II WT tires are available in four configurations, all at a 2.5″ width. The lightest is a dual compound tire with EXO casing coming in at 945g while the heaviest has a Double Down casing and a 3C Maxx Terra compound which weighs 1170g. 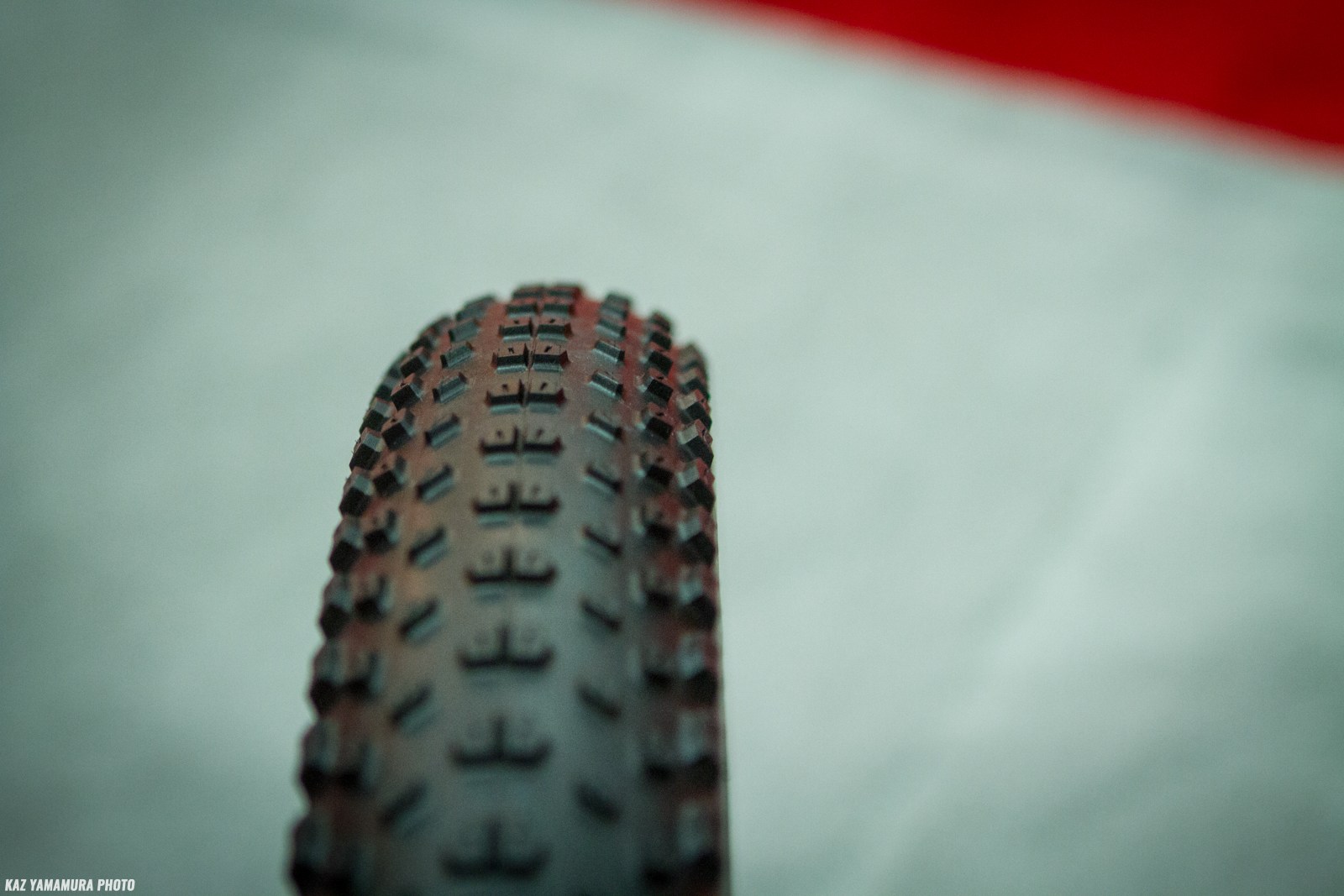 The race is on to make Plus tires that will provide enough support and grip without too much weight. The 27.5 + x 2.8 version of Maxxis’ IKON XC tire appears to be optimized for rolling speed and low weight – coming in at 770 or 715g depending on the compound and casing. 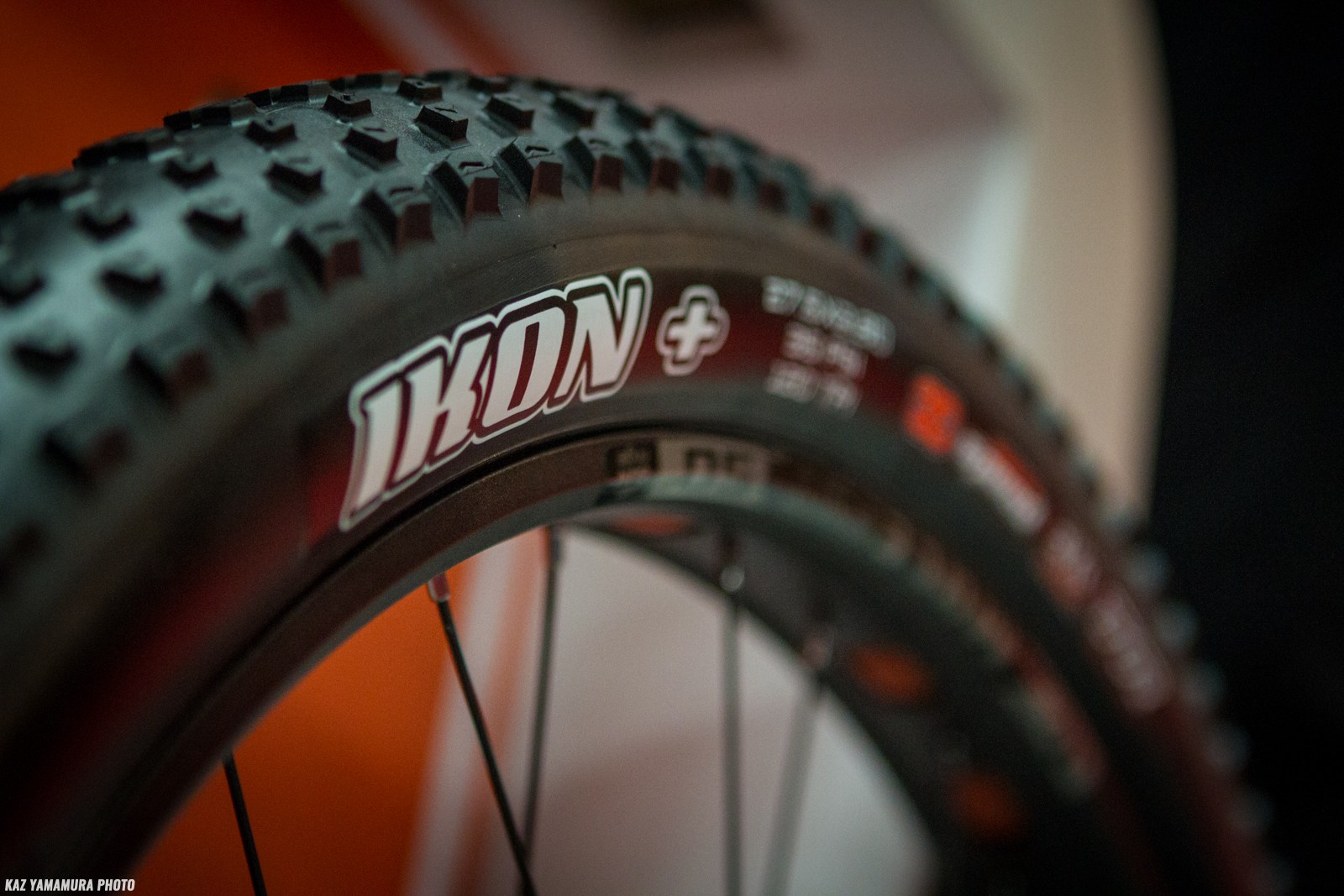 Plus tires needn’t be heavy, but how much support and flat resistance can a tire this light provide? 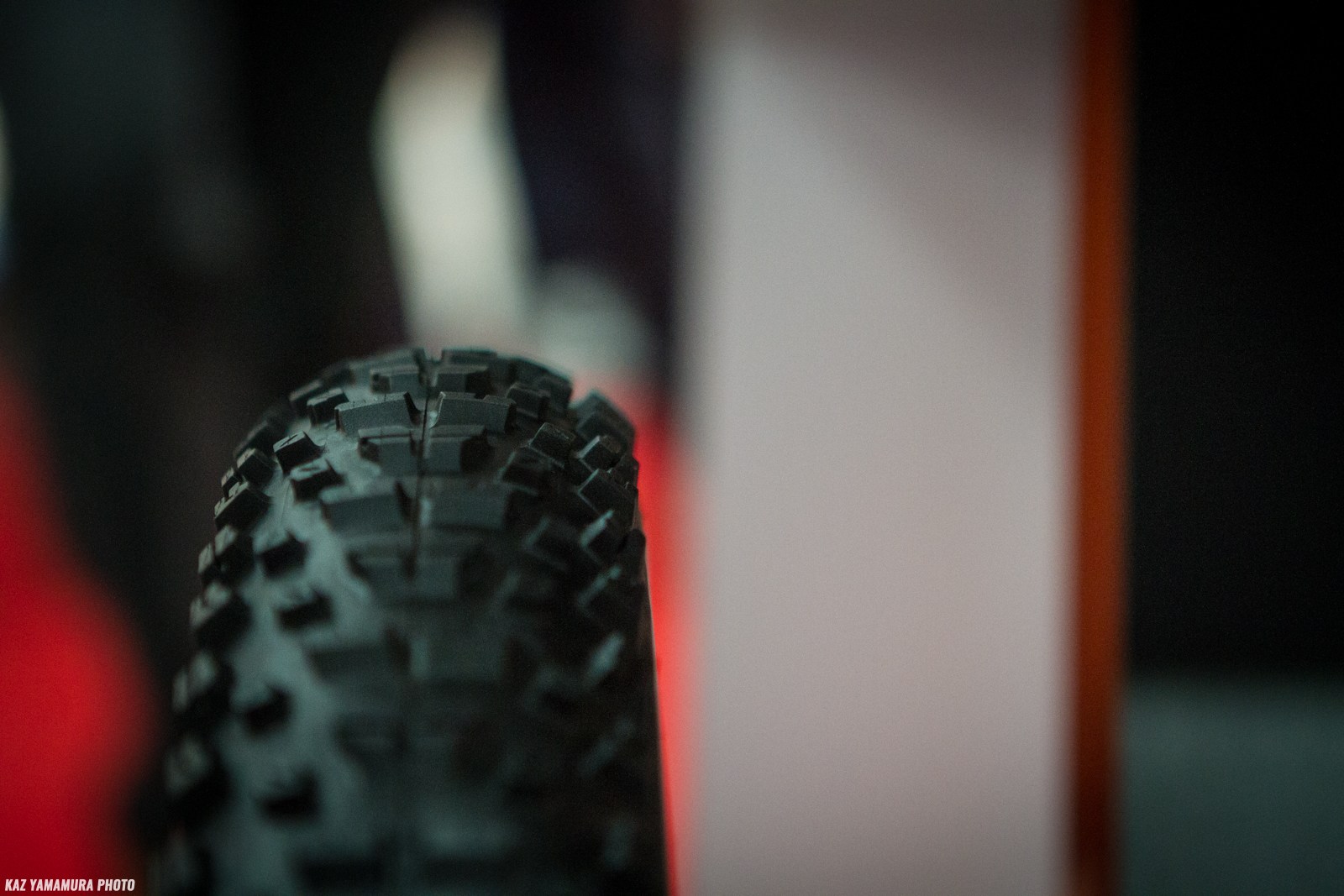 The Rekon is one of the most aggressive looking 27.5+ tires I’ve seen. It comes in at 795g in a 3C Maxx Terra compound and 845g in a dual compound – both with EXO casing. The ramped triangulated knobs are reminiscent of a High Roller. 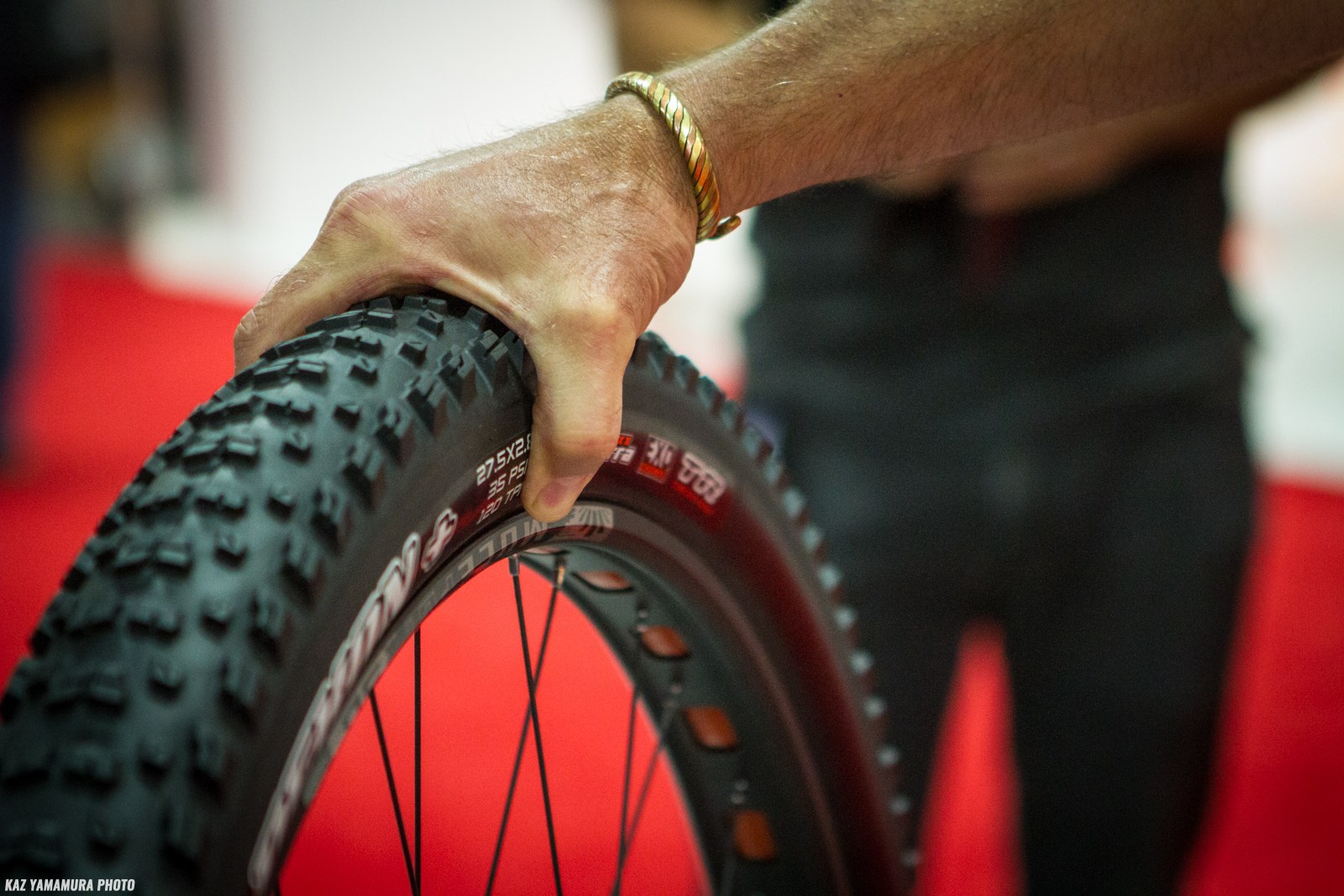 The Rekon shown mounted on a Sun Rims Mulefüt 50sl. Sun claims this is the lightest 27.5+ aluminum rim on the market at 618g.

Itching to mount any of these?

Please make this in a 26×2.5 and a 26×2.7. Amazon sells a minion II in 26×2.7 (wire bead) and it is a nice skin but it is not high volume. there is actually a big gap between center and edge knobs and there is a very pronounce give when you corner and transition from center to edge. They dont wash and grip amazingly you just need to get used to the very unnerving give when you corner.

Fellas, any indication as to when these will hit retailers?

cam, i'm confused by your statement about these new tires making a "less rounded profile". that's the opposite of my experience with wide rims - they square up regular tires and make them less rounded. i thought these wide- specific tires were designed to mitigate that (ie. round out the profile). i've not noticed any of the drawbacks you mention using normal tires on my 30 or 35mm (internal) width rims. they make 2.35 hans dampfs really quite good, for example, but taking out some of their excessive bulbous profile.

Looking at images of regular Minions and WTs side by side this appears to be case, but I agree that it's counter-intuitive.

i'm confused - wouldn't you want the side knobs spaced further away from center if you're mounting on super wide rims?

What is the ETRTO sizing on these WT tires?

I don't think the side knob wear issue is width related as much as diameter and geometry related. Modern geo , low slack, plus larger diameter tires I think means we have to angulate more to turn. I know I do that more than I used to but this angulation may simply be a modern technique on modern flow trails too.

angulating, or leaning the bike over, is always how off-road two wheelers have been cornered.

Nice! I've been complaining loudly about how fast I kill side knobs on my 32mm internal light bicycle rims. They tear so much faster than they used to on 23mm rims. The 27.5 Minion DHF just wasn't that great on these wide rims. Sounds like Maxxis listened. Can't wait to try the 27.5 x 2.5 DHF WT.

Hopefully this now gets us all the benefits of the wider rims without the drawbacks.