The Italian company known for smooth, supple forks and buxom Bomber Girls, looks to have run its course.

In April we published a story from TriRide, an Italian web site, that indicated that the bicycle arm of Marzocchi was in no danger of closure. Including the declaration that “we’re not likely to see changes to the bicycle division’s production through 2018.” That prediction is looking premature at this point; today Tenneco announced its intention to halt production and close up shop entirely by the end of this year. Tenneco claims to be in talks with interested buyers but it seems they have abandoned the hope of selling the operation as a whole. 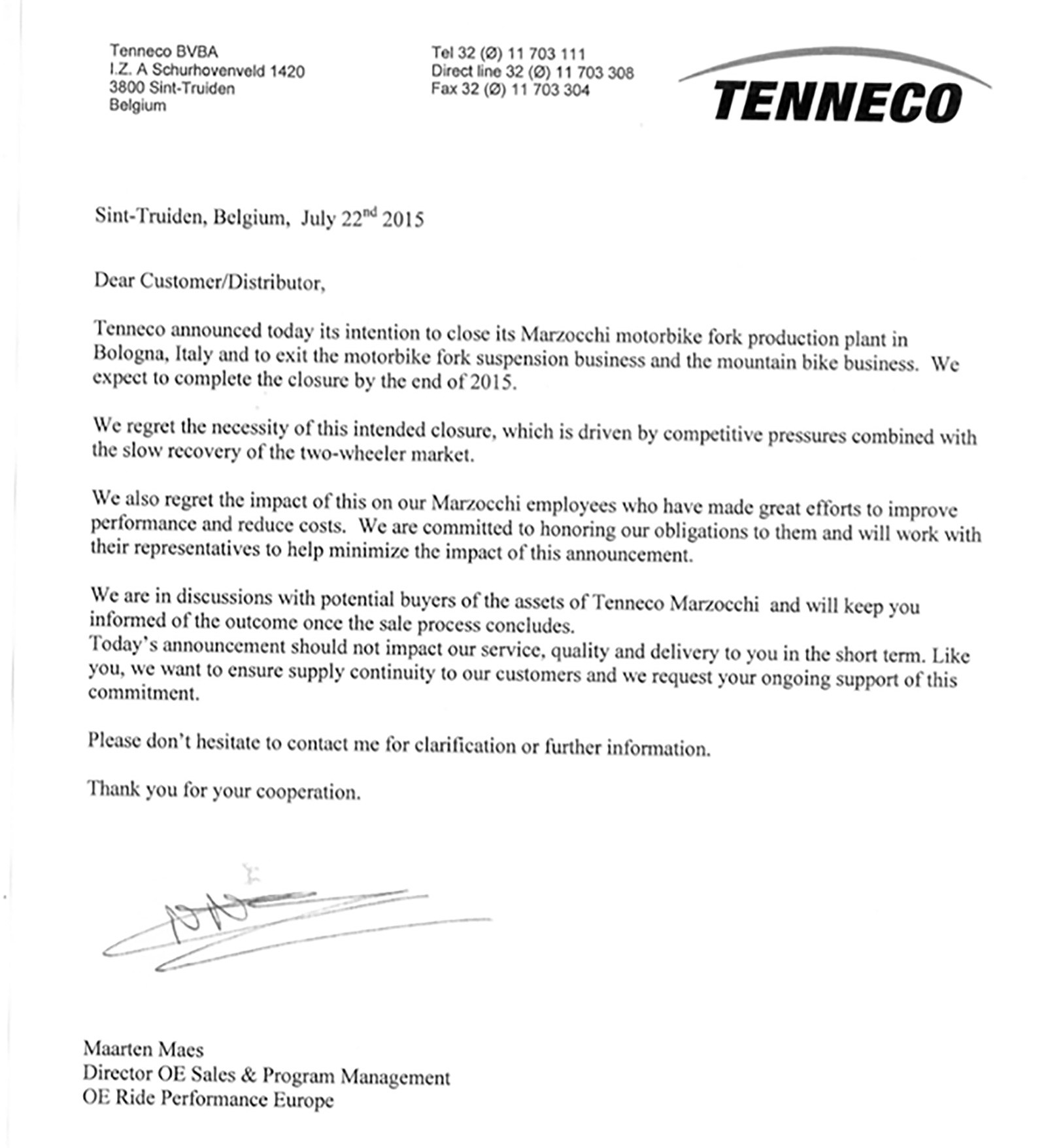 This is alleged to be the letter Tenneco sent to customers and distributors.

One possible outcome is that the name and associated assets will be purchased by an with fork production capabilities  and other assets will be sold piecemeal to the highest bidders. 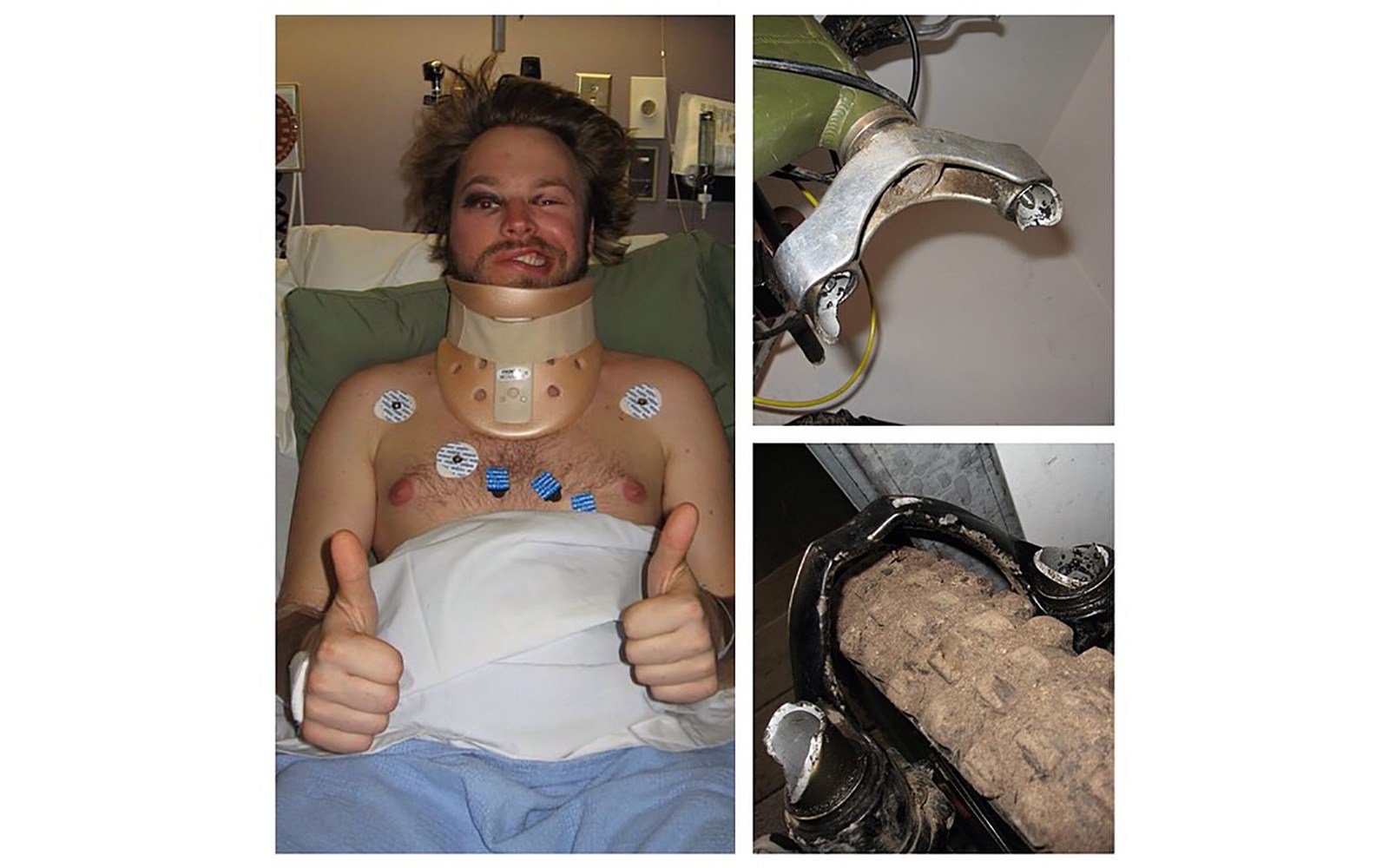 We won’t miss everything about Marzocchi. Many of us had hard landings after catastrophic failures. Few harder than Todd Hellinga.

What seems certain now is that the company we have known will no longer exist after 2015.

Below you’ll find the official press release from Tenneco.

These actions are subject to a consultation process with the employee representatives and in total would eliminate approximately 138 jobs. Tenneco currently employs 127 people at the Marzocchi plant in Bologna, Italy and an additional 11 people in its operations in North America and Taiwan.

Tenneco intends to assist its motor bike customers with the transition of current production to an alternative supplier and expects to complete the closure by the end of 2015.

“We sincerely regret the impact these actions would have on our Tenneco Marzocchi employees, and thank them for their tireless efforts to improve performance and reduce costs. Unfortunately, it was not enough to overcome continuing market challenges in the two-wheeler business,” said Brian Kesseler, chief operating officer, Tenneco. “We are committed to working with our employees’ representatives, and with our customers to make the transition as smooth as possible.”

This intended action is a part of Tenneco’s ongoing efforts to optimize its Ride Performance business globally while continuously improving its operations and increasing profitability.

Tenneco is an $8.4 billion global manufacturing company with headquarters in Lake Forest, Illinois and approximately 29,000 employees worldwide. Tenneco is one of the world’s largest designers, manufacturers and marketers of clean air and ride performance products and systems for automotive, commercial truck, and off-highway original equipment markets, and the aftermarket. Tenneco’s principal brand names are Monroe®, Walker®, XNOx™ and Clevite®Elastomer.

Will there be more Bombers? What do you think?

I'll never forget the first time I saw a prototype 4″ travel Bomber in person back in 1995 at the Blacomb AMBC race(before Whistler). I forget the riders name, he rode for Kona. Another guy at that race with a USD double crown Foes fork with 6″ of travel. Exciting times.

It is hard to believe that for years Marzocchi was the shit on the shore. In fact, for years, it had AT LEAST 90% share, and now look at it. This should be a textbook case for anyone in business that going cheap and thinking of the bottom line always costs you. I have been riding for 33 years and have tried them all….but the Bomber by Marzocchi was well made, heavy and supple. But when they went cheap and went overseas it all went south. More interesting: to think of the time when they were the bomb and if you told Bryston Martin in the US this would be the case he would of thought you stoned. But once you lose consumer confidence, and especially about riding in North Van, you never get it back. There is no Marzocchi buzz anymore, and they lost it all.

Glad my Monster Ts are holding up so well, with lots of spare parts and a spare fork to boot. Perhaps there will be a sale at the Marzocchi service centre in North Van. They have some sweet old school stuff.

And to Marzocchi: thanks for screwing up one of the best things going all to make more money. When you are out of business guess what: you make none.

Marzocchi's twitter account is claiming that their factory is still open and will be producing for 2016 at least…I don't know who to believe anymore :/

Doh, I started riding a Bomber this year after not running one for many many years. Looks like its time to stock up on parts. RIP Bomber, many fond memories of old.