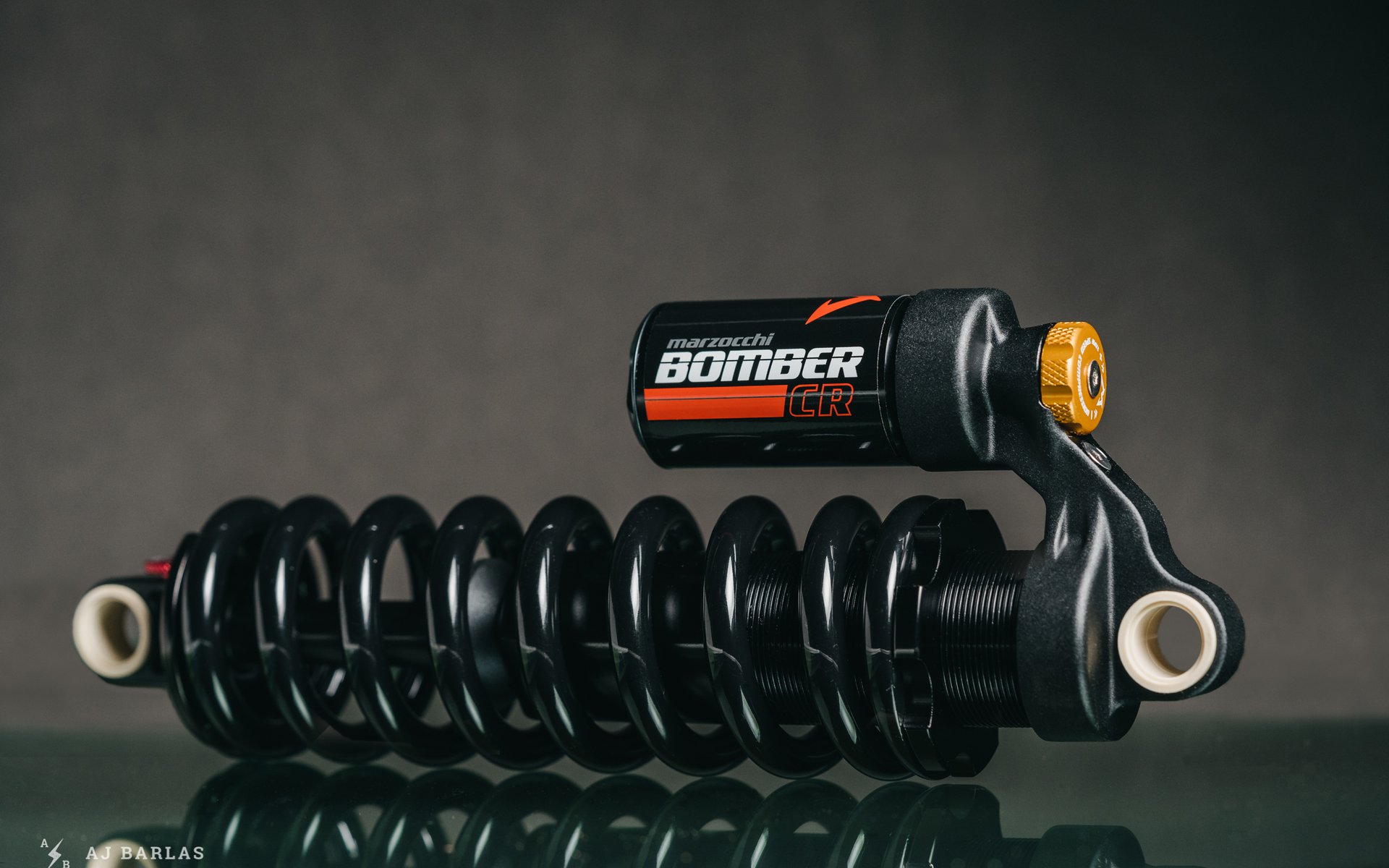 Over the years Marzocchi has been touted for the quality of their coil-sprung suspension. Now reborn under Fox ownership, the latest product and the first rear shock, brings us back to those roots. Tying in with Marzocchi's current range, the shock offers great value at 299 USD (328.95 USD with coil spring). Thankfully, lower prices and fewer adjustments don't have to mean less performance, as proven by the new Bomber Z1 fork. 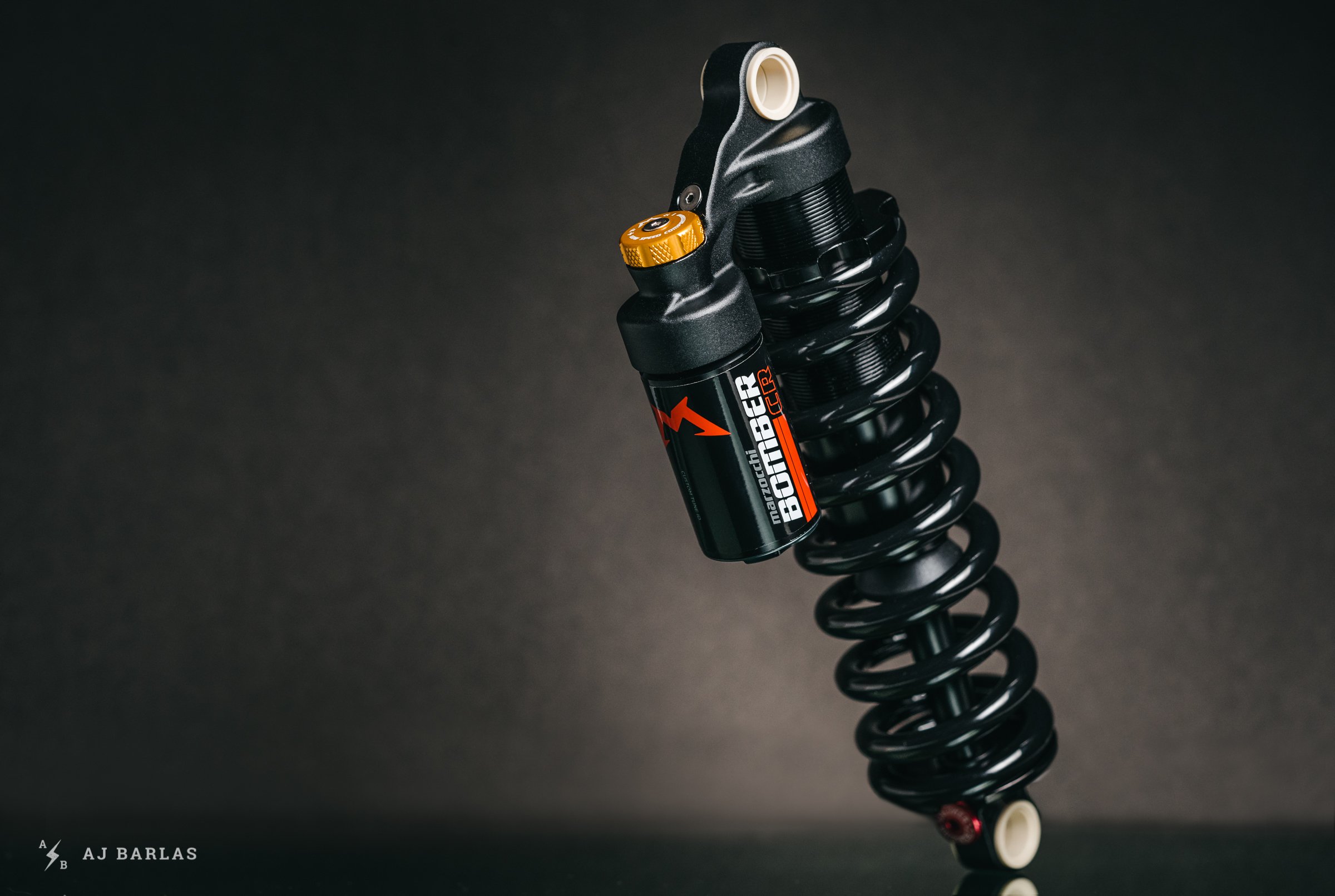 Available in a wide range of sizes, the new Marzocchi Bomber CR shock will fit everything from mid-travel trail bikes through to full fledged downhill and freeride destroyers.

Normally when new suspension is released, it comes with a large number of supporting documents. That wasn't the case here; no cutaway shock images, scientific explanations to confound even the most knowledgeable bike dorks, or insane marketing buzz-words. Rather, Marzocchi has kept it simple, just like the product.

And Marzocchi isn't shy about the lack of adjustability on the Bomber CR Coil. The new shock is targeted toward riders who want to “set their sag and shred.” Those who want the advantages of a coil shock and don’t mind the weight penalty will find it among the best value and most easily tuned shocks available.

Despite the low cost of entry and basic appearance, Marzocchi still wanted to provide excellent performance. They claim that internally, the shock features a well-balanced damping feel between the main piston and base valve. The ability to adjust the low-speed compression and rebound externally, each with 16 noticeable clicks, make it easy to fine tune. It should be noted that not all bikes on the market will mesh easily with a coil shock and it’s a good idea to research specific bikes before ordering. 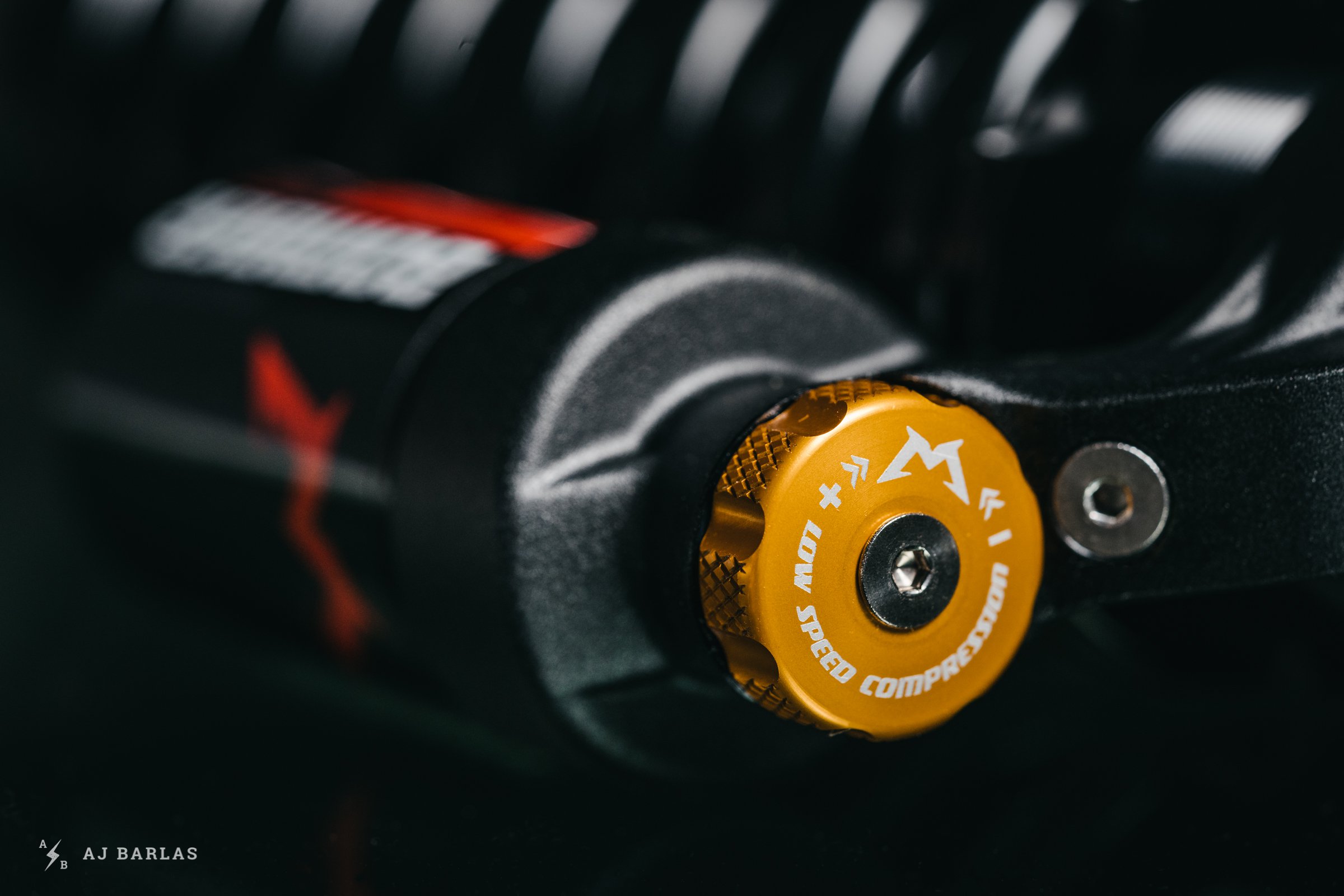 The low-speed compression dial is adjusted easily with a firm grip. The detents are clear, making it simple to count where you are on the dial. 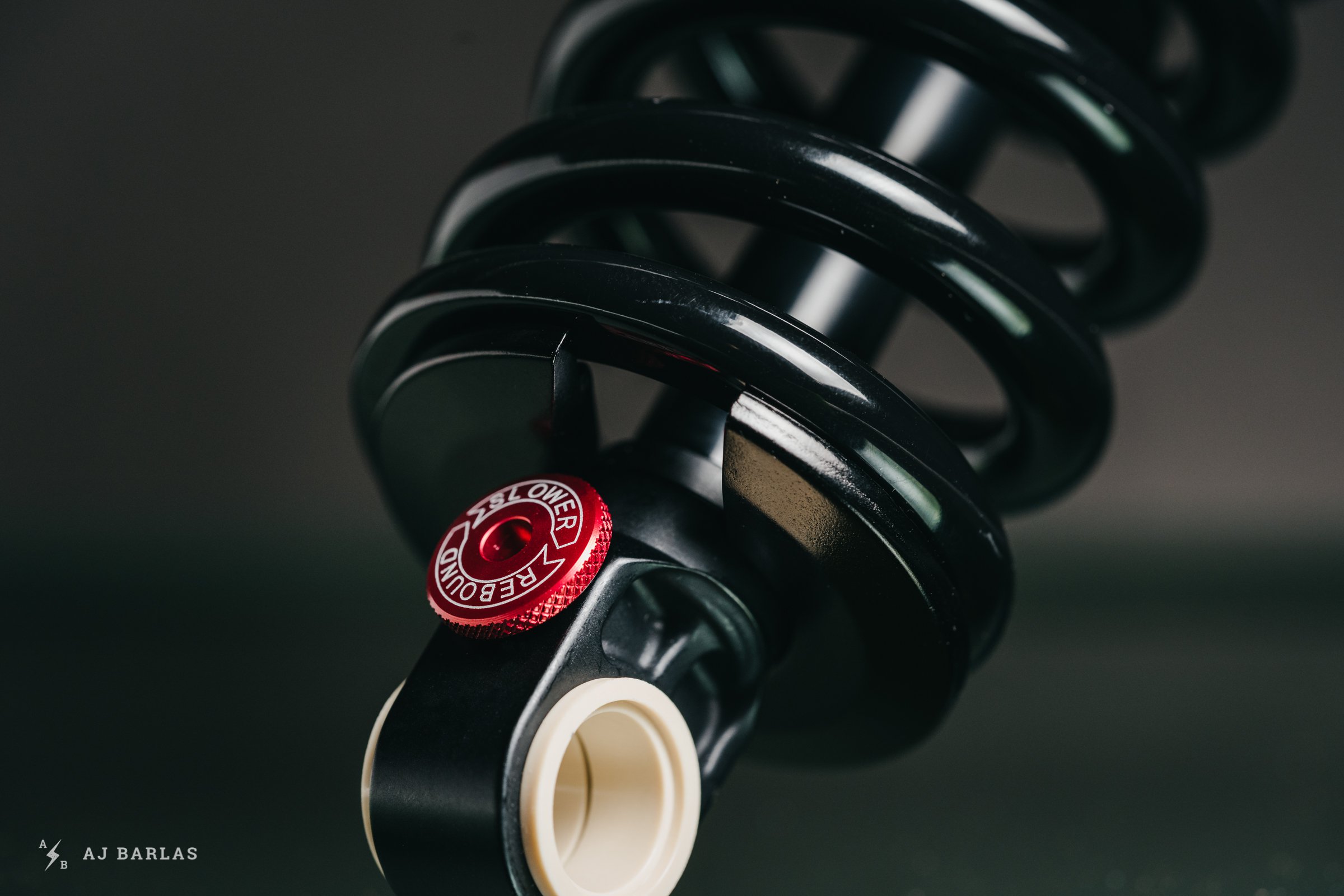 At the other end of the shock is a basic rebound dial. As with the LSC dial, detents are clear and obvious.

Those with a keen eye will notice similarities to the Fox Van RC and aside from another year of experience and development, the two are the same. The lack of external adjusters make for a simple and perhaps underwhelming presentation but don’t be fooled, once set up it works great. Tested on my GeoMetron G16, a bike well suited to metal springs, the Marzocchi has rekindled my love-affair with coil-sprung suspension. In recent years air shocks have grown increasingly capable and the performance gap between the two continues to close. And yet during testing, advantages to the ride quality of a coil were clear.

Back to back with the Float X2, the differences were more obvious than I expected. Both offer remarkable composure but the coil Bomber CR, a much cheaper option, outshone the Float X2, which retails for close to double the amount at 625 USD. As a flat pedal rider, the settled ride quality was welcomed; much less effort was required to keep my feet planted through rough sections of trail. The only downside to the low-price coil was less projection out of corners or off lips of jumps. This could be tuned for to some degree, with more external adjustability, but at the end of the day air shocks still provide more in this sense. It’s the nature of compressing air.

As an air spring is compressed the pressure builds creating more resistance. The deeper into the stroke it's pushed, the more this builds. Coil springs have a more linear dynamic and allow the wheel to move more easily through the travel range, especially at the initial part of the stroke. There's also less friction in the system and while brands like MRP now produce progressive coil springs, considering a coil shock like the new Bomber CR requires some research. You don't want to excessively use the travel or bottom out too hard. Bikes like the latest Santa Cruz Nomad or YT Capra can benefit while something like the Ibis Ripmo, which features a 'regressive' rate in the latter half of the stroke, won't benefit the same way.

Once the correct spring weight was found the bike comfortably skipped across obstacles and performed impressively over repeated heavy hits. Prior to finding the correct spring, it was getting caught too deep in its stroke, throwing out the shape of the bike, and it required far more rider input. I also noticed delay between compression and rebound during these deep compressions on the too soft spring. The final spring weight provided less static sag but the shape felt excellent on the trail.

The light top-end allows the wheel to easily move out of the way, providing considerable traction. In wet, slippery conditions, where I can be hesitant, the Bomber CR Coil delivered huge confidence. Consistency in a range of weather conditions has been another welcome benefit. The shock has never felt different day to day or during a ride and hasn’t needed any attention. It’s made riding simpler and more enjoyable; just swing a leg over and get going. 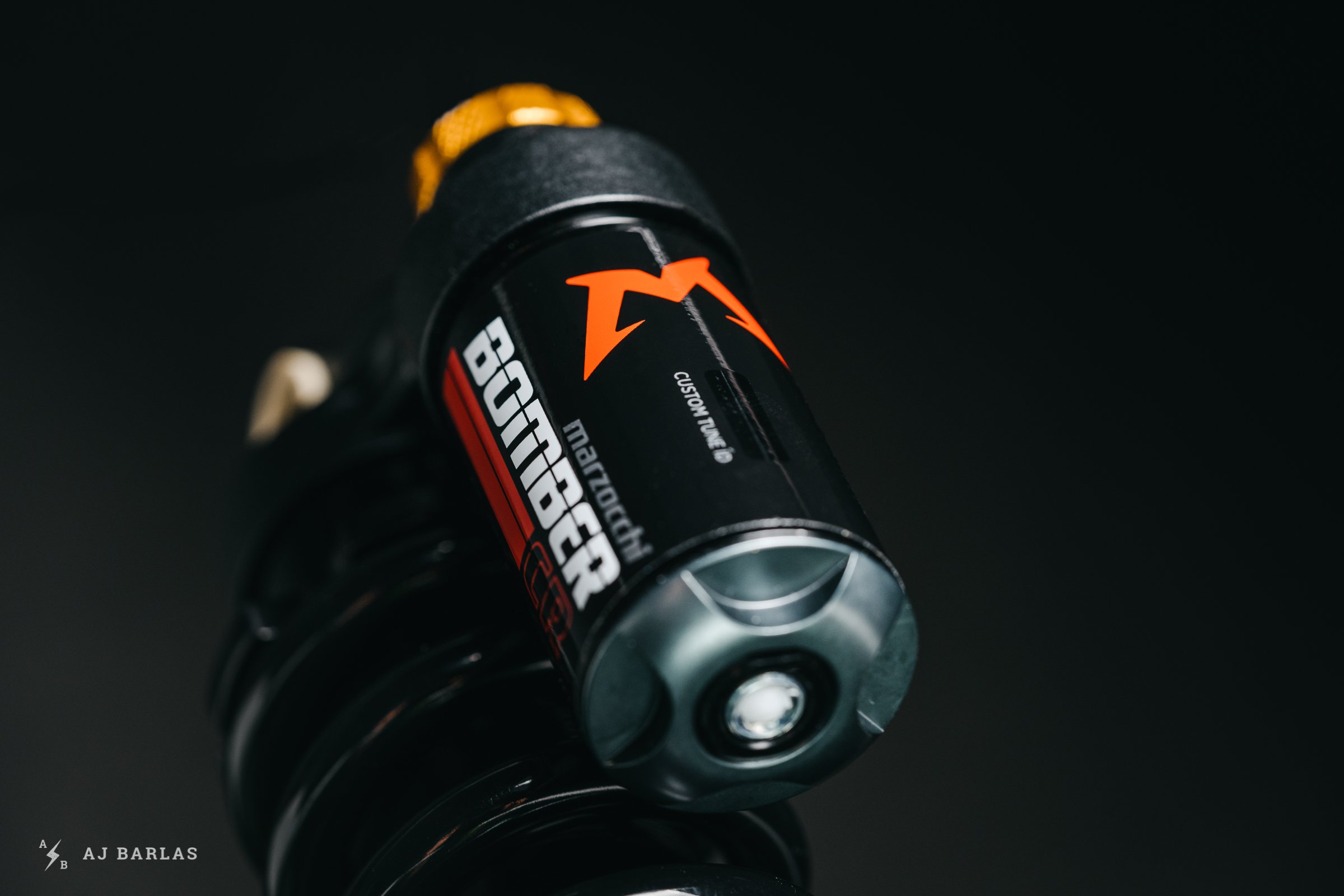 Simple and ever so effective. For 300 USD the Marzocchi Bomber CR has been very impressive.

For a hair under 300 bucks—30 USD more if you need a spring—the Marzocchi Bomber CR is a no-brainer for riders seeking more traction and composure from the rear of their bike, provided their bike is compatible with the more linear rate of a coil shock. There aren’t many adjustments but Marzocchi is confident the damping range offered will cover a wide range of bikes. There are no complaints, particularly when the price is factored in.

More information on the Marzocchi Bomber CR is available on their website. 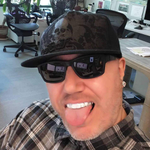 I assume Fox springs, like the SLS, will fit this?

It's just a Fox shock rebranded Marzocchi, so yeah.

As Nouseforaname says. Shouldn't be an issue!

Thanks to you both, had to ask can never be too sure these days. Cheers.

I've always felt that when US auto makers rebrand one model as assorted other 'models' (GMC/Chev/Lincoln/Pontiac/Cadillac/Saturn/etc) it's a raw-dog deal for the less-than-savvy consumers who end up buying them.

Other than a lame cash grab and a means to keep the legendary brand that is Marzocchi alive, what is one legit reason Fox would do this?

Cheers to AJ for a well written review, regardless.

I think they're trying to reposition the Marzocchi brand as the everyman brand. An affordable upgrade/value statement.

A bit less complex than the top flight Fox products, and a a bit heavier as a result. It's about all they could have done really - it wouldn't make sense to have both brands competing for the same customer with the same tech in each one.

Now you've got a Fork like the Z1 - a stiffer chassis than the 36 for a weight penalty, and a coil shock that doesn't have the bells and whistles of the Fox stuff but will perform acceptably for 95% of consumers. The other 5%? Well there's a product for that.

This is a great platform for the 5% of riders that have learnt all off the shelf suspension products are compromised in someway and the only way to get the best performance is custom tuning. Any good tuner has plenty of experience with these shocks and after a good tune external adjustments are useless.

Another factor, customer wise, is that you can now get a lower-range coil offering in almost any configuration, trunion, metric, standard, all the lengths etc... While the Fox RC was mostly just OEM these days.

They are pushing affordable/reliable performance down to Marz, while keeping the fancy stuff for Fox.  I imagine they'll continue aligning the product lines that way as time goes on, which makes sense to me.

All good points. As Mammal states, the Van RC was mostly OEM and as a result, sizes were limited. This gives consumers a low-cost solid performing option available in a lot of sizes. For 300 bucks that's pretty sick.

I'd be interested in seeing if something like MRPs progressive springs could be used with this shock for a cheaper option for using a coil on a bike with a linear suspension setup.

Also, any info about how climbing performance was?

The climbing performance was great, but it is greatly affected by the bike. The G16 puts me in a solid position and with the slightly taller BB height when seated, those angles were improved over my air setup. Traction all day up and down. No complaints.

Checking out those progressive MRP springs would be amazing, and could also go down a rather deep rabbit hole. Haha.

I just got a MRP Progressive spring. You can decode the fitment for your shock of interest on the spring and spacer pages or call MRP. They are very helpful.

Mrp springs are designed to fit almost any shock using shims, which they also sell.

I'd love to see a comparison between a high end, stock OEM air shock vs a custom valved, budget coil shock. I have a TTX on my Enduro and also Cane Creek DB Inline CS. Honestly setting the CC up fills with me dread, I just can't be bothered. I get it to where I think it's perfect, then put the TTX back on and wonder why I'd ever bother with anything else.

Isn't that kind of a weird comparison? I get that it fits your specific situation, but comparing shocks which differ with respect to coil/air/complex/simple/stock/custom/manufacturer introduces a ton of variables and you will never know which one is responsible for the ride feel.

A more universal comparison might be cheap custom tuned vs. complex high-end shock. Either both air or both coil, preferably by the same manufacturer (Fox == Marzocchi).

Yeah a little. I guess the experiment would be to see if a cheap coil could outperform a high end air shock.

Fox Van RC was good, affordable and reliable. But it's a disappointment to see that Marzocchi is becoming a second-tier brand for Fox inferior product lines.

I'd say there's nothing inferior about this product. Relatively affordable, fits everything, and works.

It's not a top line product, like DHX2, that's what I mean by saying it's inferior. And it's not a unique Marzocchi product either, just rebadged and a little bit revamped old one from Fox. Marzocchi used to be a company that was designing their own suspension stuff, it's disappointing to see they now offer just rebadged Fox products for less demanding auditory. I really had hoped the would come up with something new.

I understand your disappointment, but it's been clear for about a year what Fox's intentions were with the Marzo brand. That ship sailed a while ago. What can be celebrated here, is that these rear shocks fill a considerable gap in aftermarket rear shock availability at the price point. Nothing inferior about that.