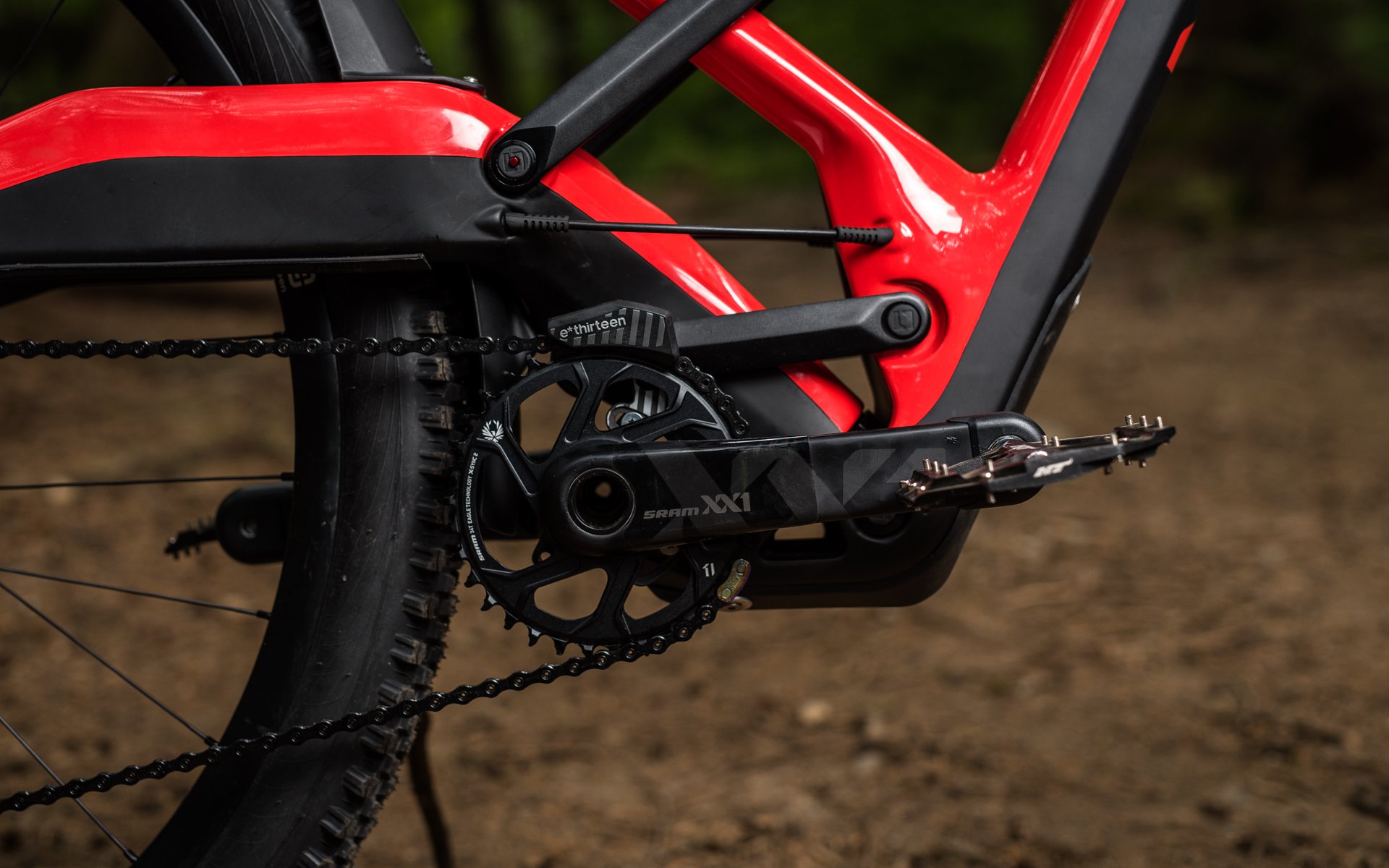 I fear a future in which Autocorrect achieves consciousness, becomes our texting overlord, and destabilizes civilization." - Neil deGrasse Tyson

The Lockheed Martin F-35 has 8 million lines of software code. Houses are getting 'smart' and they can adjust temperature based on when they predict their owners will arrive home. Soon cars will be driving their owners home from the pub and taking over when the sexting starts up. Sometimes I wonder if my apple should have a little sticker on it with an ingredients list (is it really just an apple?).

The world is becoming ever more complex but the answer to the question underlying every reaction I've had to Naild's R3ACT suspension system is: "Yep, it's still just a bike".

I'm going to pull back the curtain here so I don't 'have to' invest any more time at the local super market explaining the suspension system of Marin's Wolf Ridge while I'm collecting eats. It's not that I don't want to... it's just that my three year old is sick of hearing about it. The video below will give you an idea of what's going on when the bike cycles through its travel. 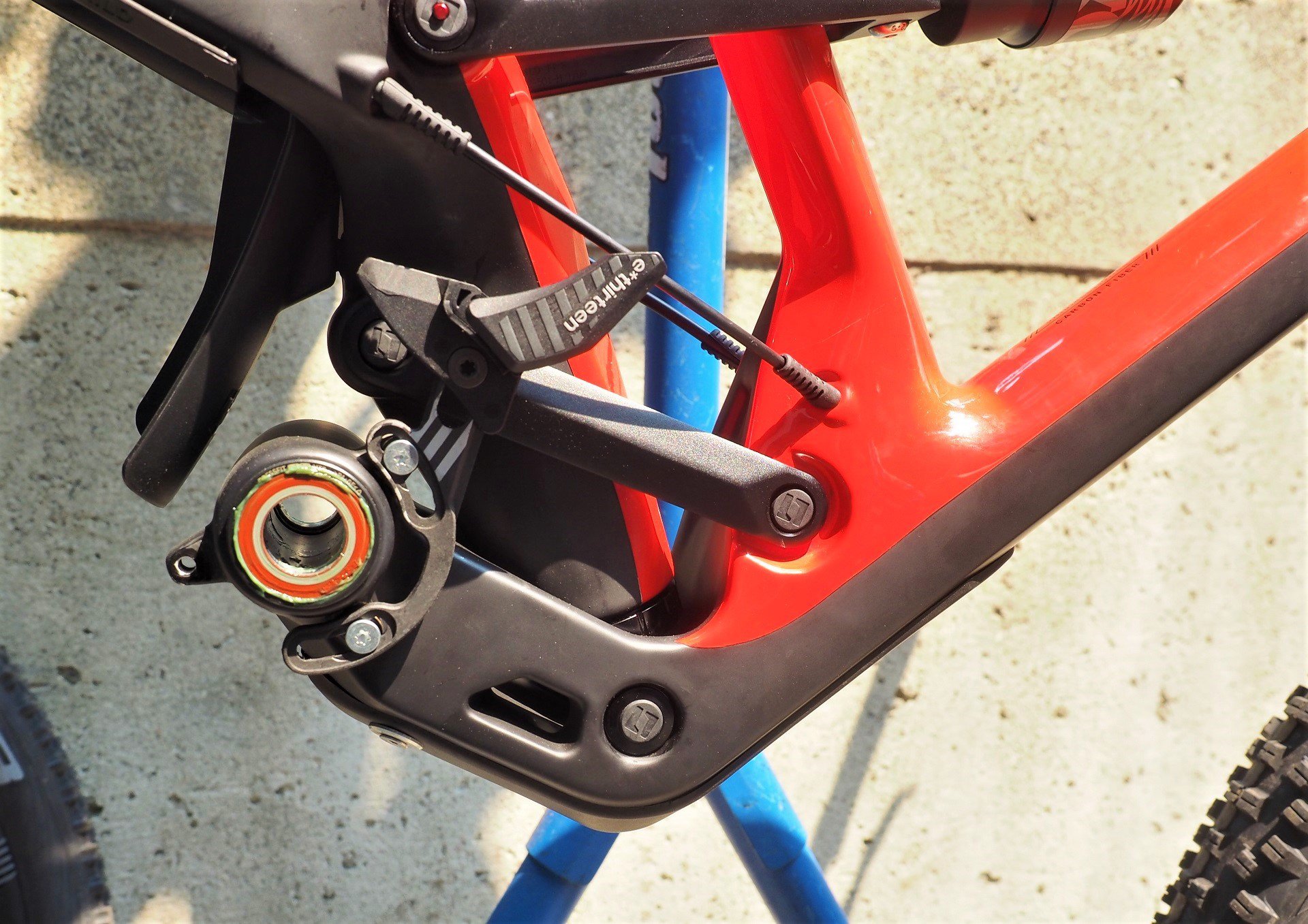 With no hex heads showing the R3ACT 2PLAY suspension system on Marin's Wolf Ridge has an amorphous space age appearance. 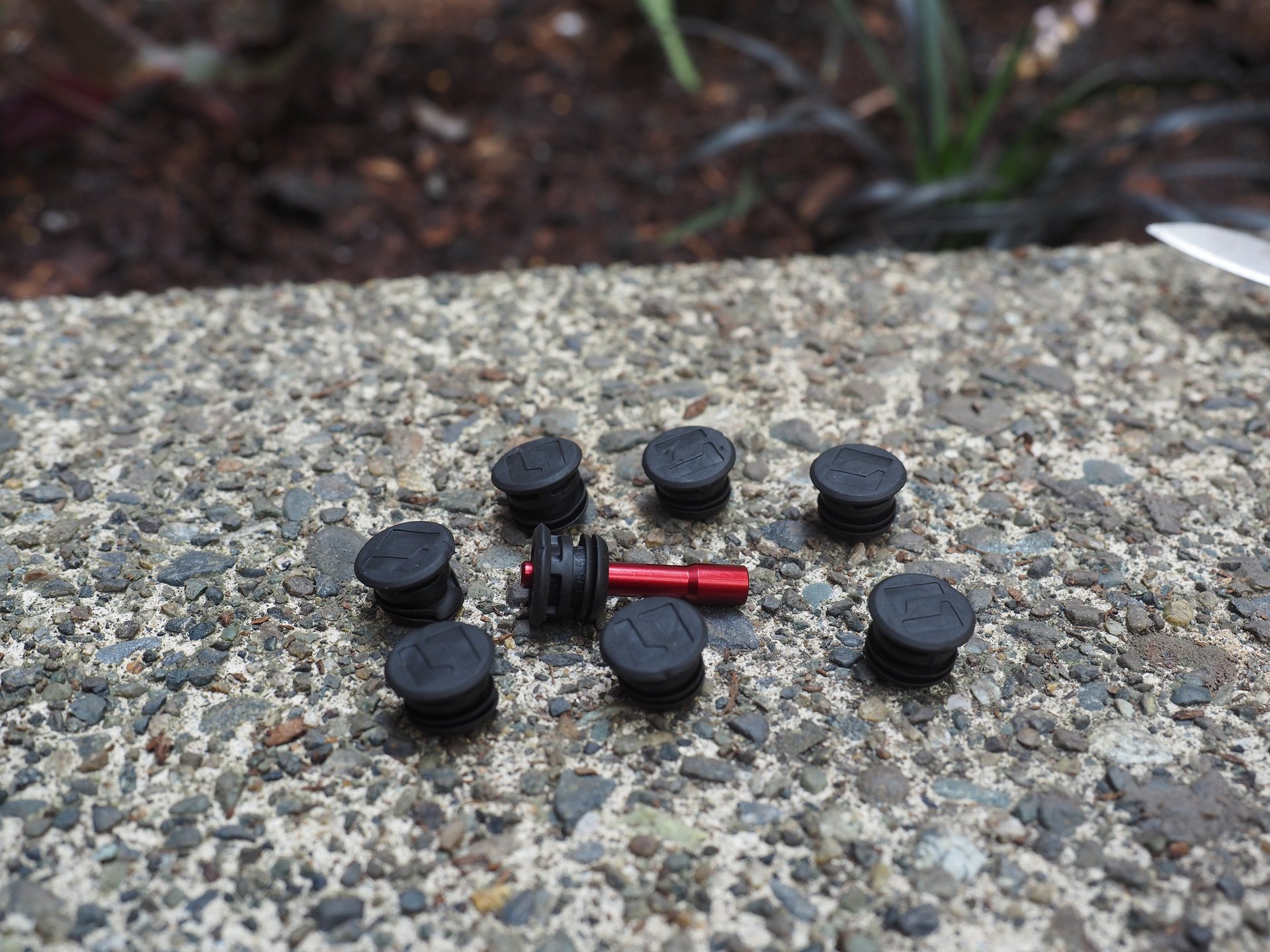 The rubber inserts seal the hex heads and are easily removed. The anodized red post is the bleed button for the R3ACT stanchion. 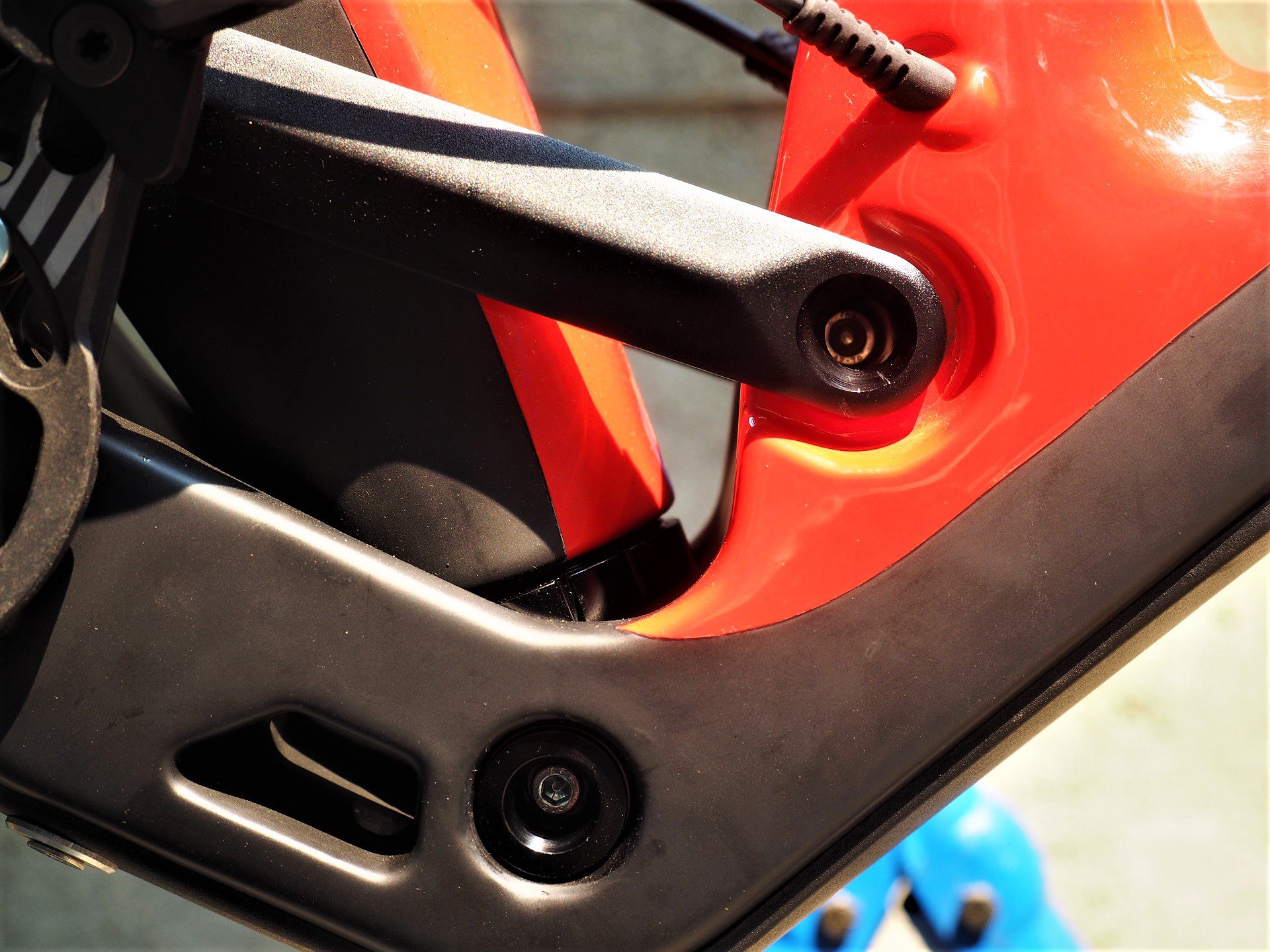 From stem to stern almost everything with a thread on the Marin Wolf Ridge is applied with copper anti-seize. Steel hex head bolts are all graded.

It's more than just a licensing situation. Naild.it developed their R3ACT suspension system in conjunction with Polygon and Marin. NSMB's Wolf Ridge test bike is a fully integrated animal where the linkages and hardware are as integral to the frame's suspension system as the R3ACT strut and Fox X2 shock. 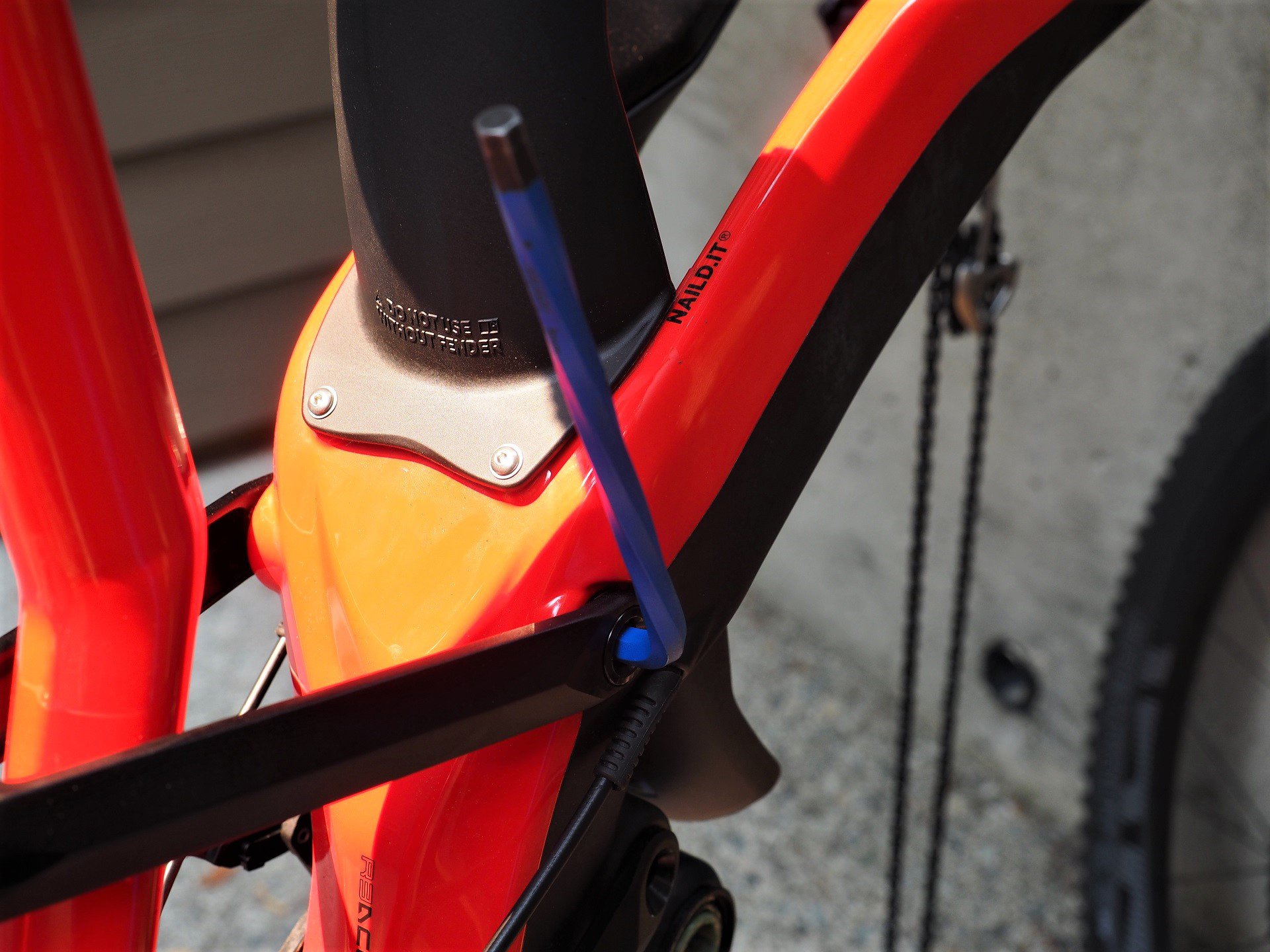 Rather than bond threaded inserts into the carbon frame, all the R3ACT pivot hardware threads into itself on either side. A messed up thread means replacing a cheap alloy part rather than a carbon frame member. 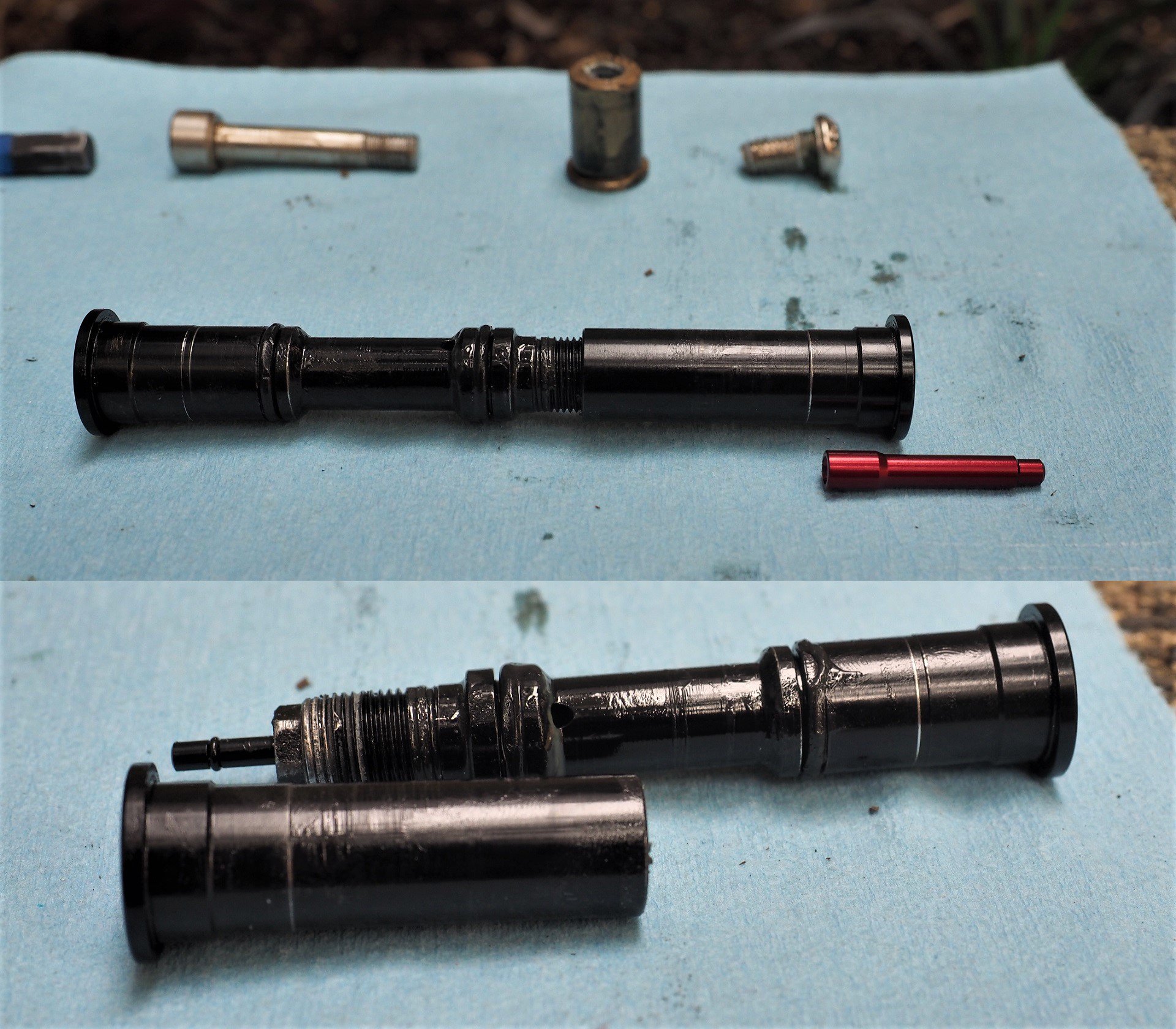 The air bleed system for the R3ACT strut is smartly integrated into the pivot hardware. The 8mm alloy hardware captures itself from either side.

The 2PLAY suspension design works as a system. So while the alloy frame members appear a touch on the wispy side, lateral stiffness is impressive. 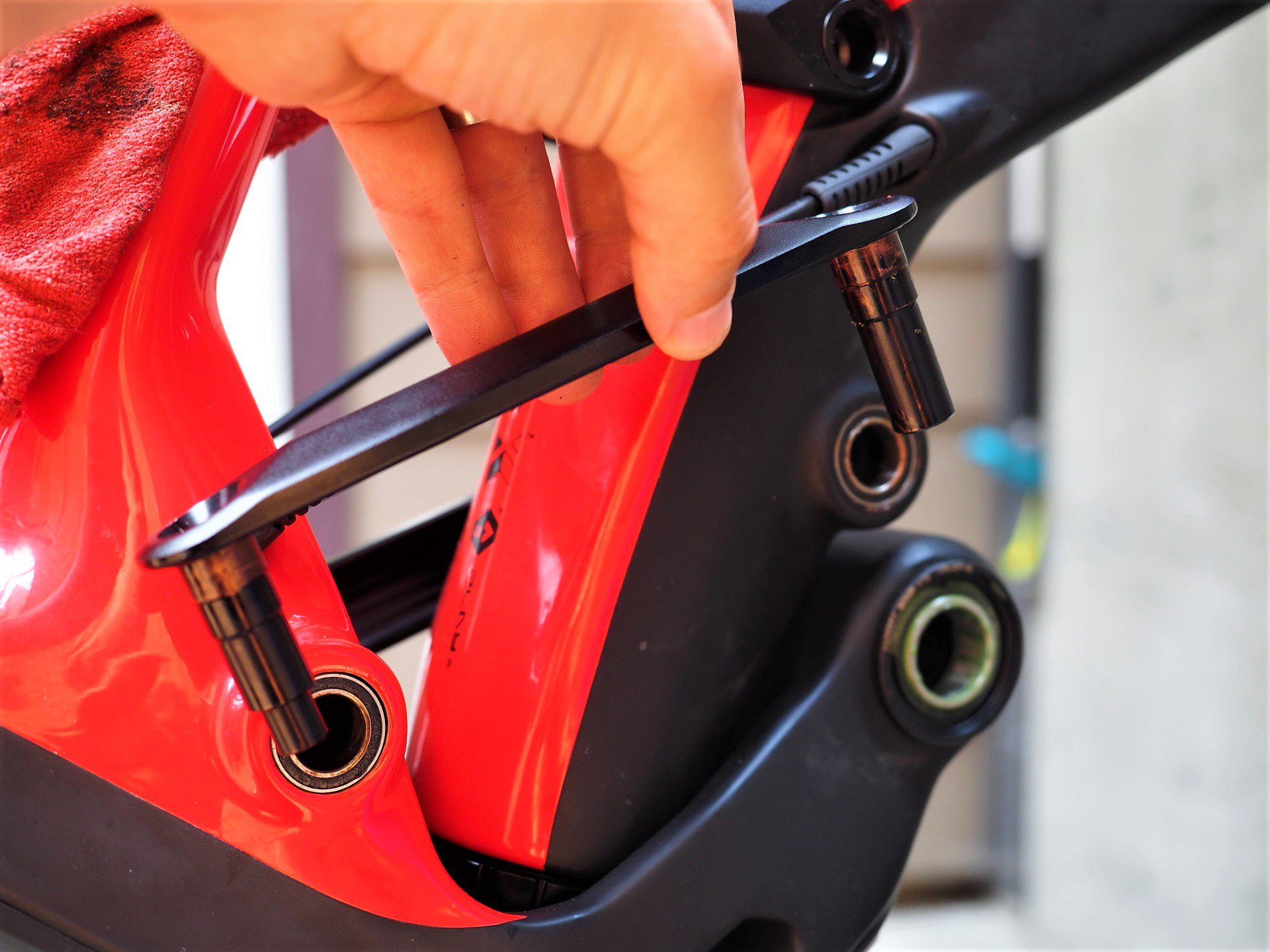 Bearings are pressed into the frame and then the linkage presses tightly into the bearings from both sides. 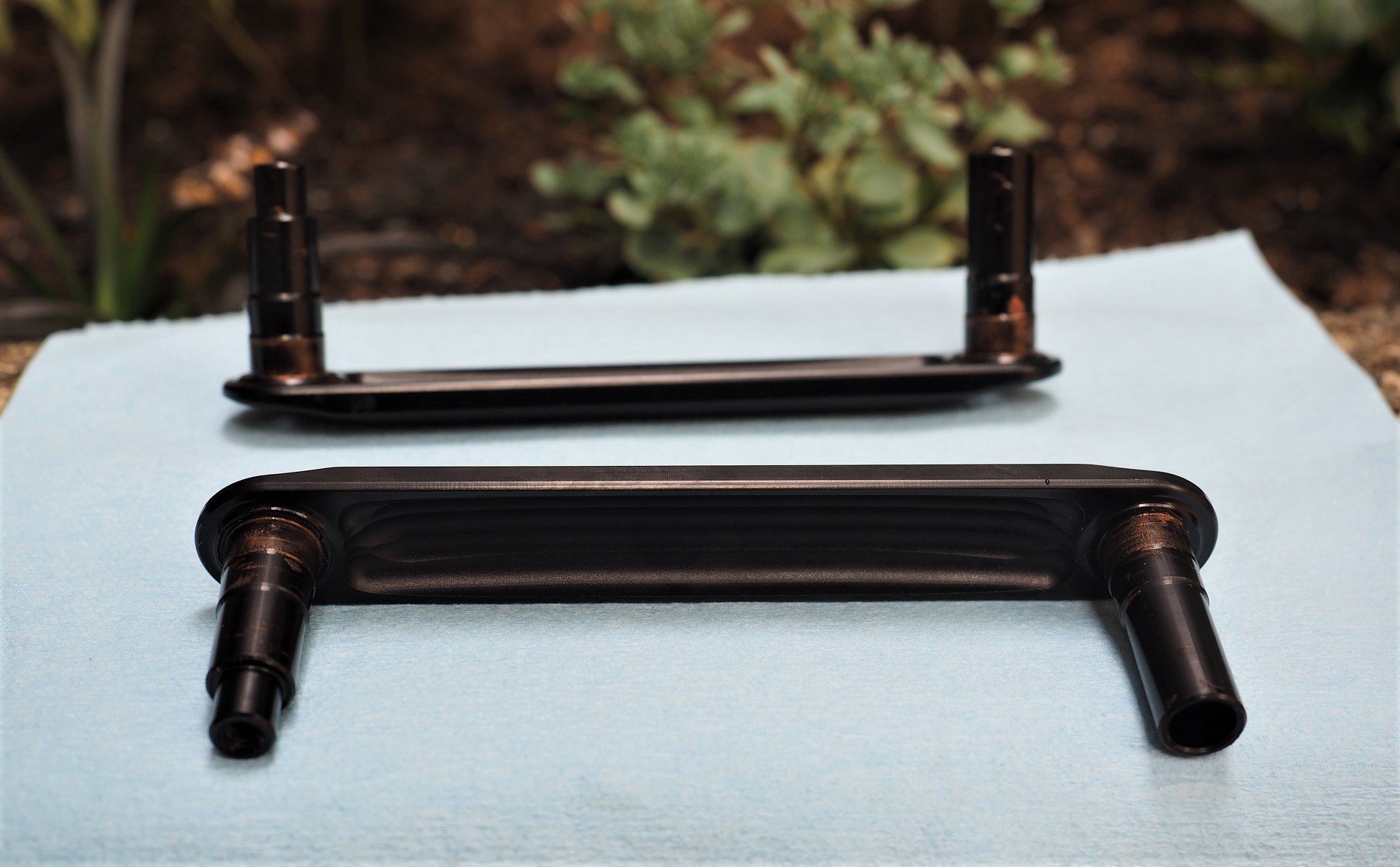 The linkage plates engage with each other and a pair of bolts then tighten them together. 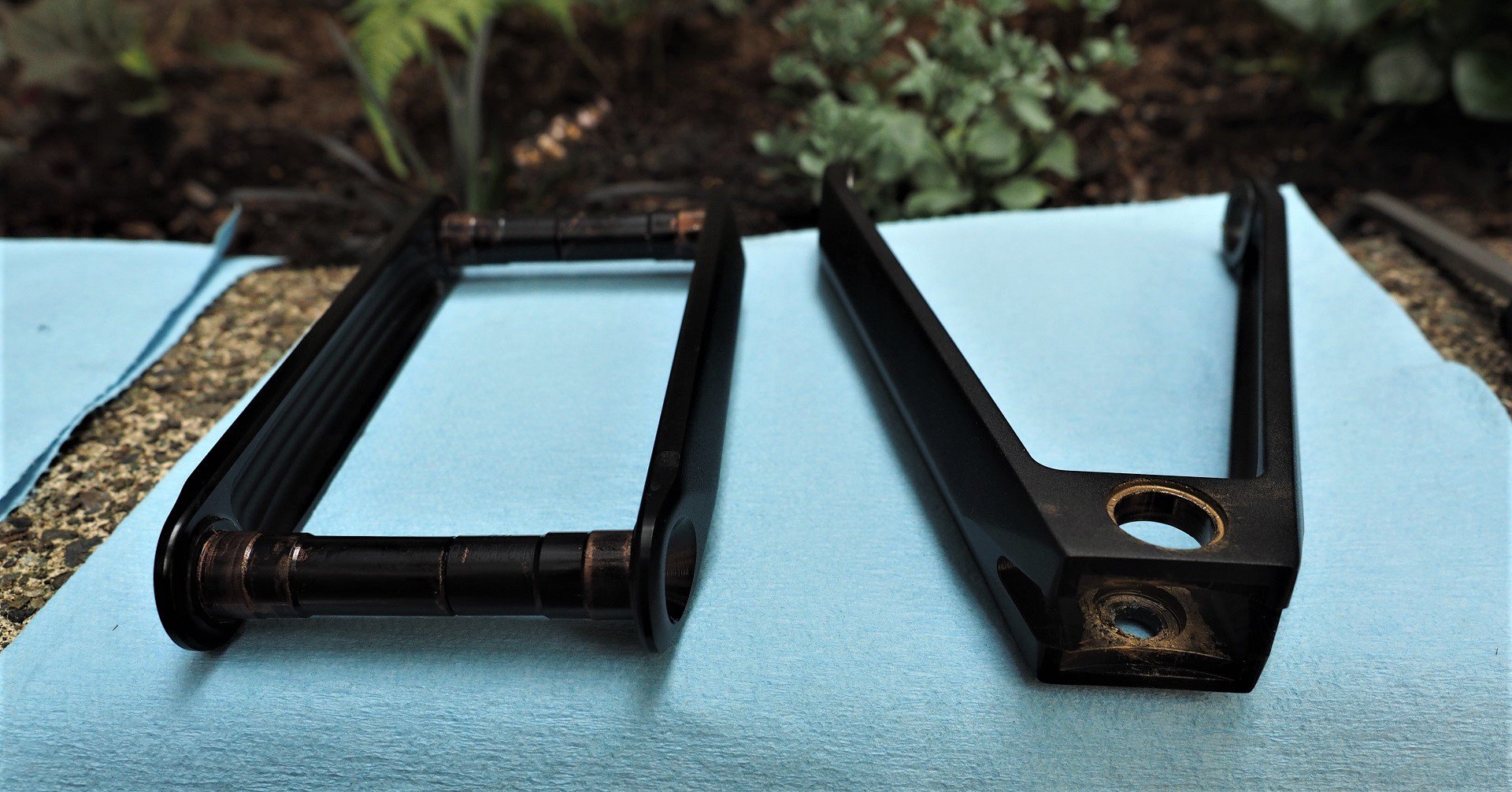 The shock is driven by a yoke mounted to the swingarm with bearings taking up the rotation instead of a DU bushing.

The heart of the R3ACT system is the telescoping strut assembly. I think Naild puts it most succinctly when they call it a "mechanical pedal platform" that separates pedaling efficiency from suspension performance and shock damping. Separating pedal feedback from trail undulations without all the negatives of other designs making the same claims‽ 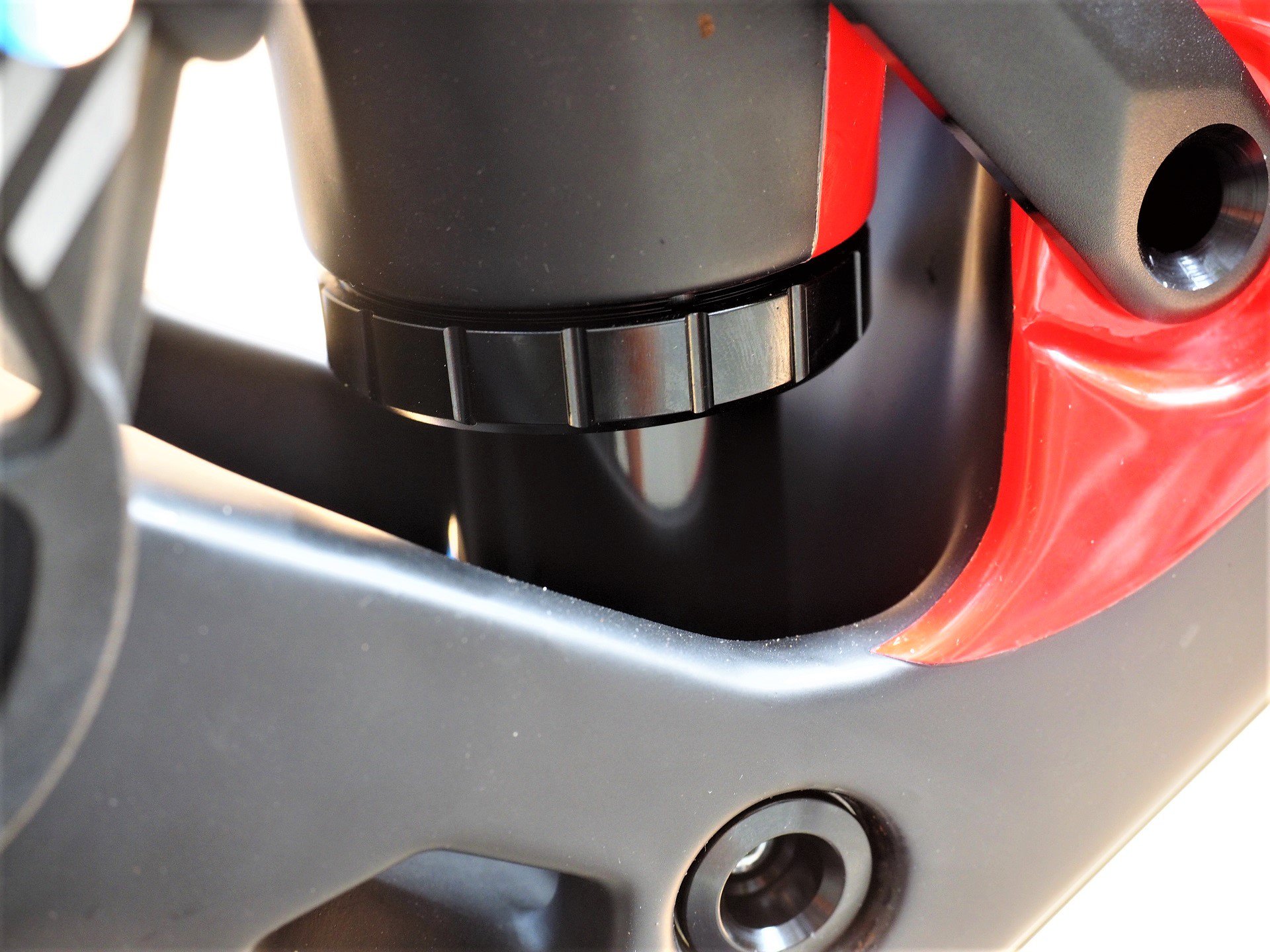 The stanchion of the R3ACT strut is visible when the bike is fully assembled. It travels approximately 40mm varying the suspension kinematics of the frame design. 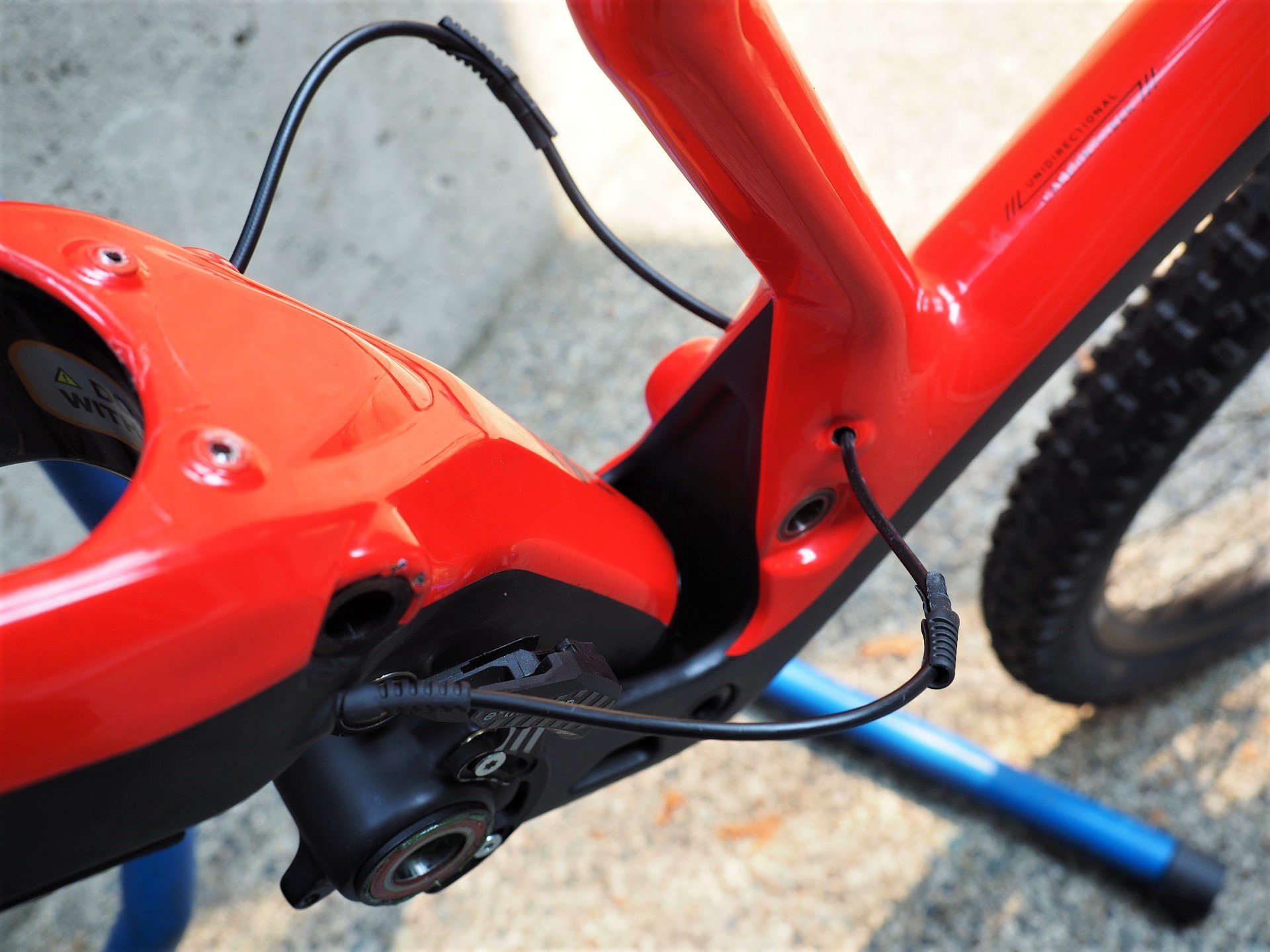 A clean bolt-on fender helps protect the R3ACT stanchion from muck and rocks and the pocket where the stanchion is housed is designed to purge detritus deposited there when the riding gets mucky. Sliding the internal cables through the main frame provides enough slack to service the system without removing the brake or derailleur.

The R3ACT stanchion is lubricated by oil and protected by an SKF seal. It glides on bushings borrowed from a moto fork.

Wiping down the stanchion every 20 hours of riding or so is recommended but no disassembly should be required for around 200 hours of riding (or about two full rear shock services). Since the stanchion only travels 40mm, is not heavily loaded, is well protected, and the seals and bushings are designed for motorcycle forks with 11" of travel, it's realistic to expect them to last years while only requiring oil changes, 40cc at a time. 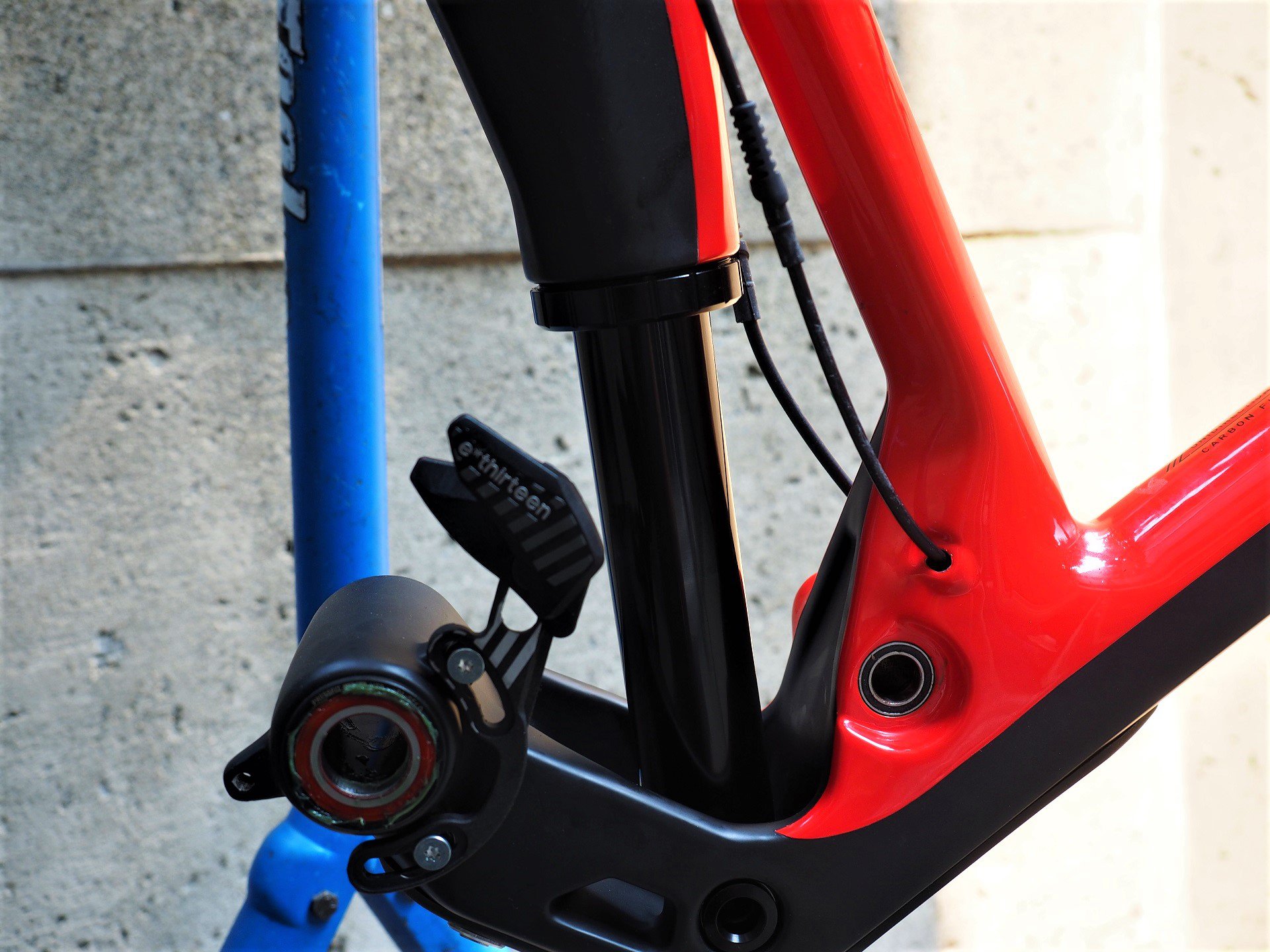 The stanchion is not bolted in place. Remove the linkages and maximize slack in the cables and the swingarm slides up-up-up and pops off. 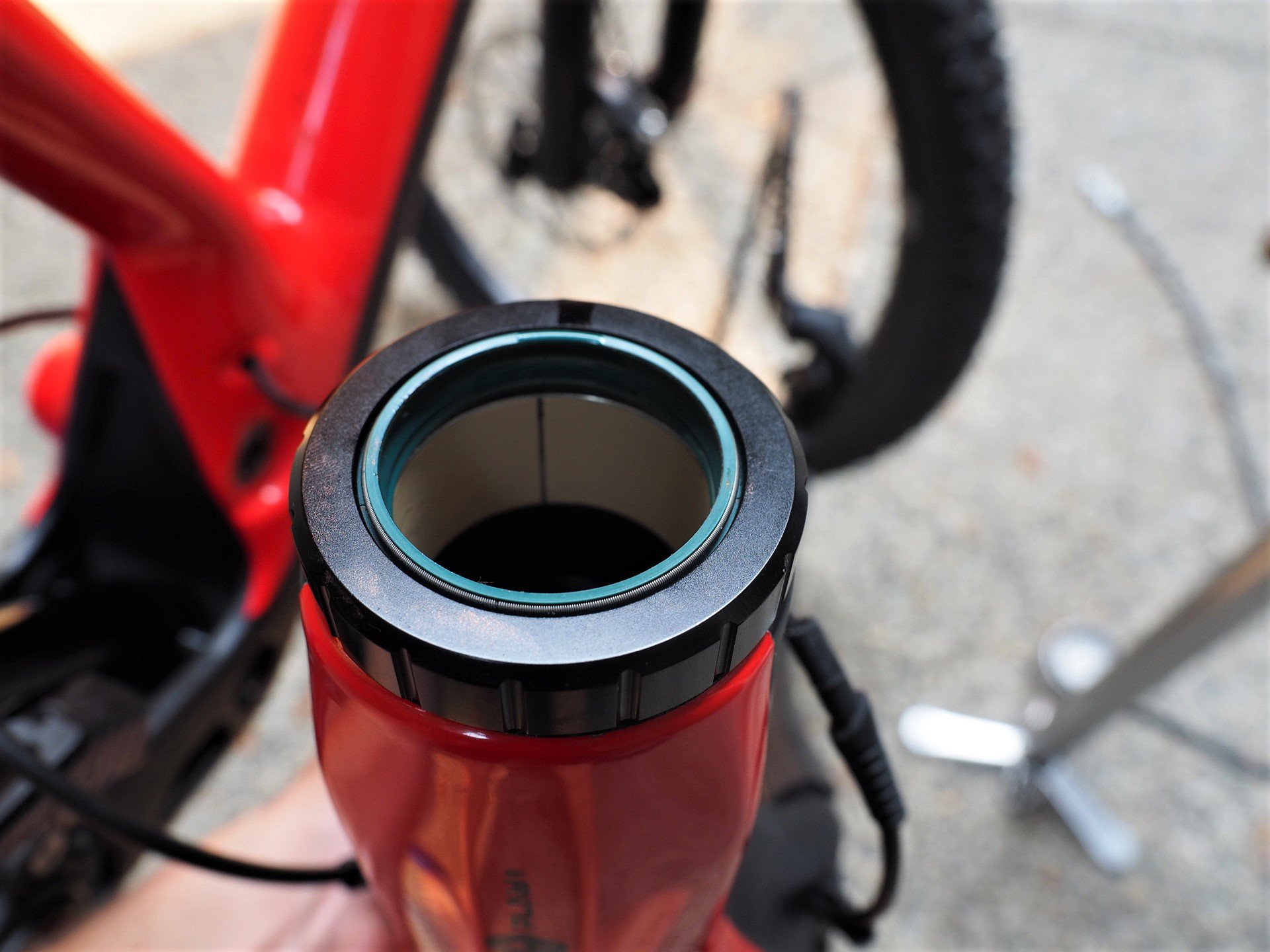 SKF moto seal and bushing set borrowed from a moto fork with 11" of travel only moves 40mm through the bikes' 160mm. Arguably overkill for the application, but it should make the system very reliable. 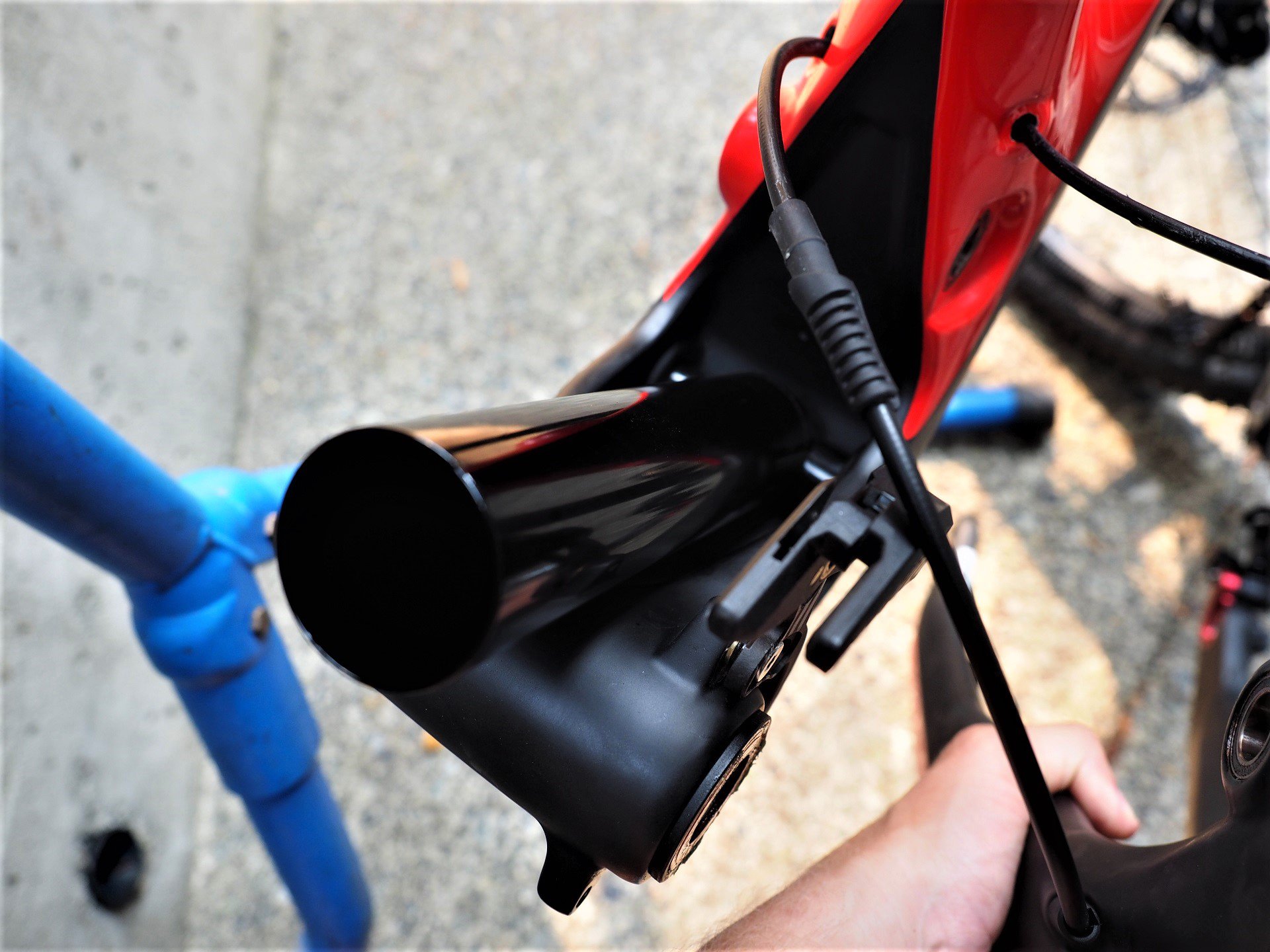 The R3ACT 2PLAY stanchion is bolted into the main frame and moves fore-and-aft on two sealed cartridge bearings.

Anyone who can drop the lowers on a suspension fork and change the lowers will have no issues re-lubing the R3ACT 2PLAY suspension strut at the 200-hour interval.

Replacing the main seal would be best done using the proper sized seal driver but it is certainly possible to do at home without - but that's a concern that should be years down the road since oil sits at the seal all the time thanks to its inverted design. 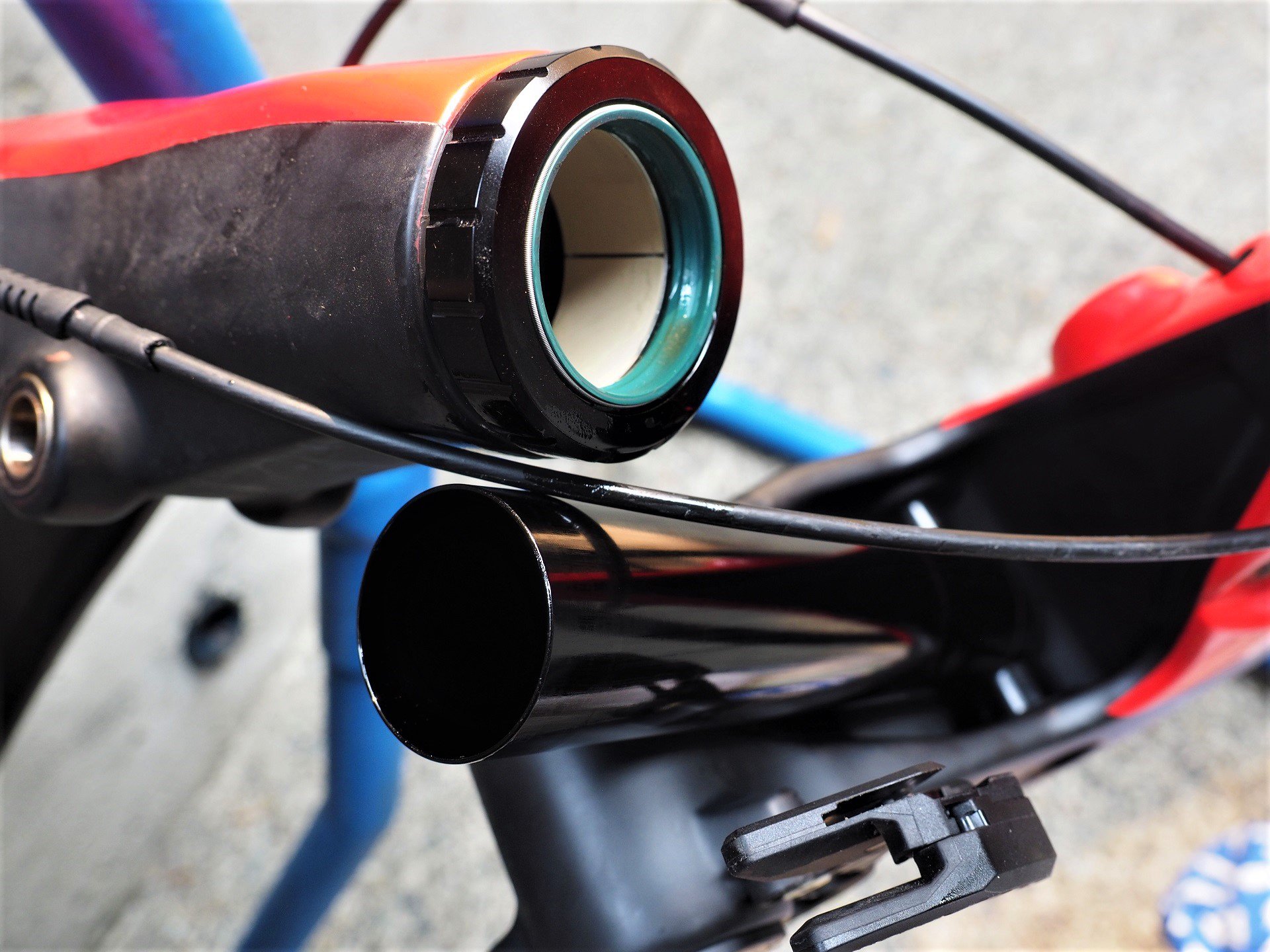 Re-grease, or replace if it's time, the easily accessed linkage bearings at the same time as doing a quick re-lube of the R3ACT strut. No special tools are needed. 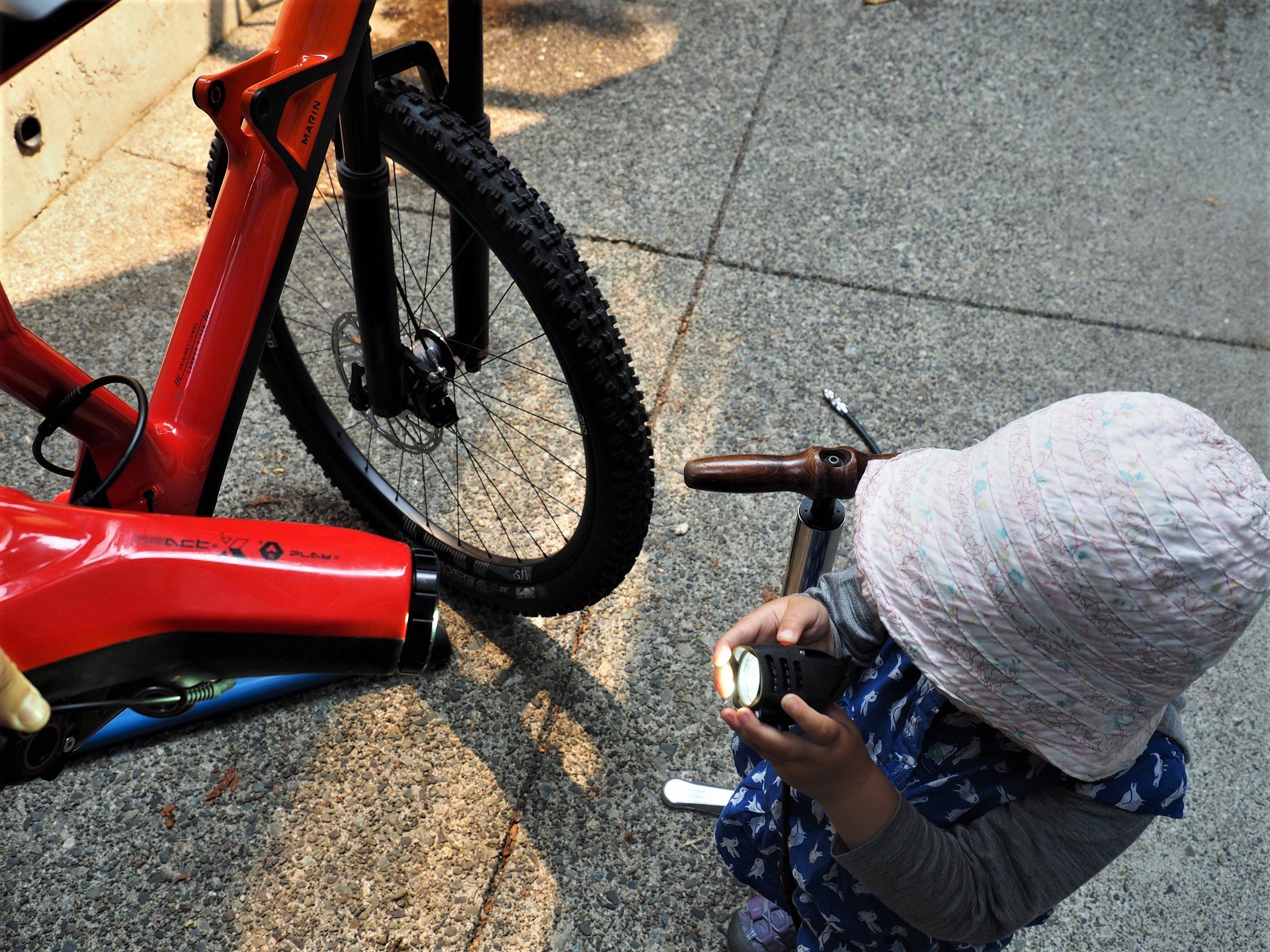 Two sets of bushings, oil and a seal. Once everything is apart it's child's play to understand how Naild's suspension system physically functions.

There is certainly more going on than a simple linkage-driven single pivot but the R3ACT design is not a terribly complicated suspension design. And it certainly isn't difficult to disassemble and reassemble. Heck, this teardown was easier than removing the shock from some bikes.

For more information on Naild's suspension designs and other products check here.

Is it just me, or does that suspension animation show the wheelbase shortening under compression?

Wheelbases always shorten under compression - even on hardtails - as the fork compresses?

Some suspension designs have rear centers that grow initially but I can't think of a current suspension bike where the rear center gets longer through the stroke?

Im not sure to be honest.  Most animations just show the rear linkage movement, and it just struck me how much rearward movement I saw in the front wheel when the full bike was shown with the fork being compressed.  Its possible all modern designs are like this, but I definitely remember riding a few bikes back in the day where the opposite was true.

nice teardown, andrew. was wondering what the guts looked like. i'm curious if the same suspension kinematics could have been achieved with swing links (ie, eliminate the proprietary sliding element). also wondering if the added friction of the slidey thing requires tweaked damper settings. have you tried cycling the suspension without the shock? would like to swing a leg over the thing at some point. morbid curiosity and all.

Thanks Perry. The suspension cycles smoothly without a shock but that isn't surprising freshly lubed. The question I think is if the system moves smoothly when side loaded and with the amount of bushing overlap it definitely should.

I know that's caveat laden but I wanted to get all the technerdery out of the way so I can focus on the bike.

Re. Kinematics, I don't think you can accomplish the R3ACT design goals without the strut because you need the mechanical platform counteracting pedalling in order to run such light damping ?

I mean that in terms of their DH and climbing ride goals from a shock with no pedal platform and a light tune.

Maybe a better way to put it is I think if you take any suspension design with well thought anti-squat properties and a lot of progression and throw on a CaneCreek Inline coil shock with their climb switch remote you could build a 160mm bike that could compete with Naild's ride goals maybe?

From a design perspective I don't think anything else is going to achieve the set-and-forget just ride it everywhere performance they're claiming. A complicated design that yields a simpler setup and on trail experience maybe?

It looks to me like a single pivot with a main pivot that moves which reminds me of the Yeti Switch Infinity system SO its an obvious comparison ?

I guess in the sense that they are both very different designs to anything else on the market - and don't have usable water bottle mounts :-).

I get where you're going with the idea of a 'floating single pivot' where the Marin's main pivot is the strut mounting point although I also get the view point that it's similar to dual link bikes just with the strut being linear. Either way it's probably easiest to refer to them as (lower case) virtual pivot point bikes and go for a ride.

The R3ACT design also travels up the 40mm. I don't know how much Switch Infinity moves but it's definitely much less.

The Marin rides a lot differently that the Yeti. Where the Yeti is quite linear the Wolf Ridge has a floating amount of progressiveness and is very, very easy to set up for a balanced (front-rear) ride.

It's definitely an interesting bike to attempt to equate to other bikes.

yeah I looked at the Switch infinity path of movement on line and then the R3ACT thinking i had the answer but while it is a moving pivot I'm thinking so do the other VPP  ... another thing I don't understand along with religion