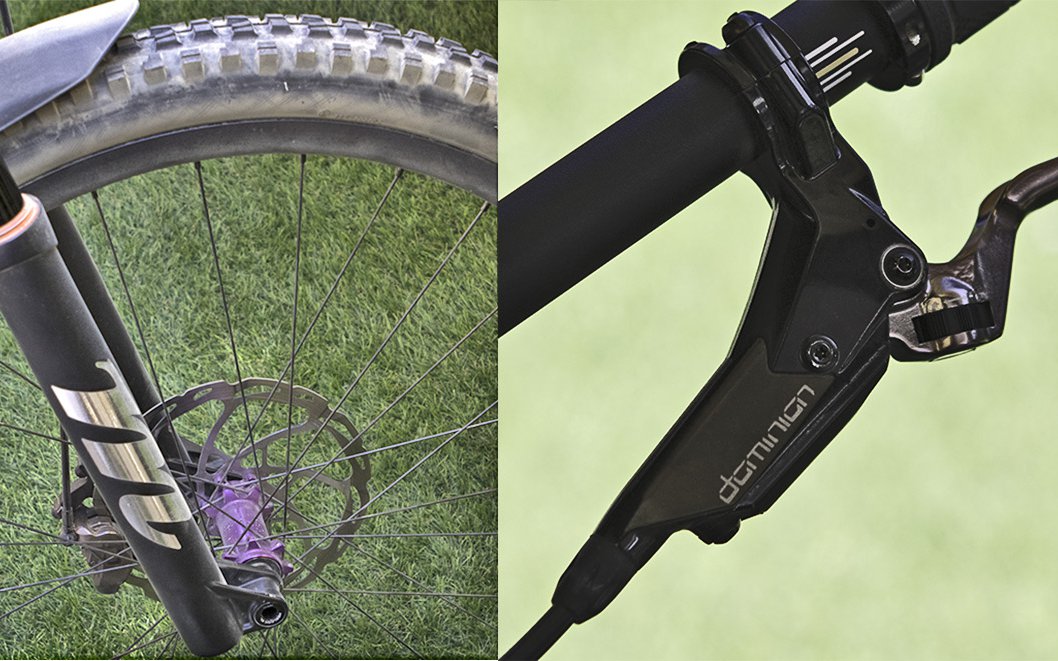 Manitou and Hayes Plotting a Comeback

Unless you've been obsessed by mountain bikes for 15 years or more you may no idea of the stature Hayes and Manitou once had. Hayes wasn't just the brake to have, it was virtually the only brake for a long time, and the only brake worth considering for even longer. Until the HFX9 came around, Hayes brakes were reliable, powerful, and easy to bleed. In 2005 company management purchased the brand and subsequently acquired SUNRinglé, Wheelsmith and Answer/Manitou.

Manitou used to battle Fox, Marzocchi and  Rock Shox with quite a lot of success. The inverted Manitou Dorado dual-crown fork with carbon fibre uppers, was an incredible performer. I wish I still had one. Manitou forks have lost favour in some circles in recent years, but underdogs tend to try a little harder in this business and the products we have tested in recent years have been very good.

The product the company seems was most excited about is a new fork with 37mm stanchions. I was told the fork is 25% stiffer than a Fox 36 while weighing only 1992 grams. Stiffness is apparently comparable to the new RockShox Lyrik but it weighs a little less. 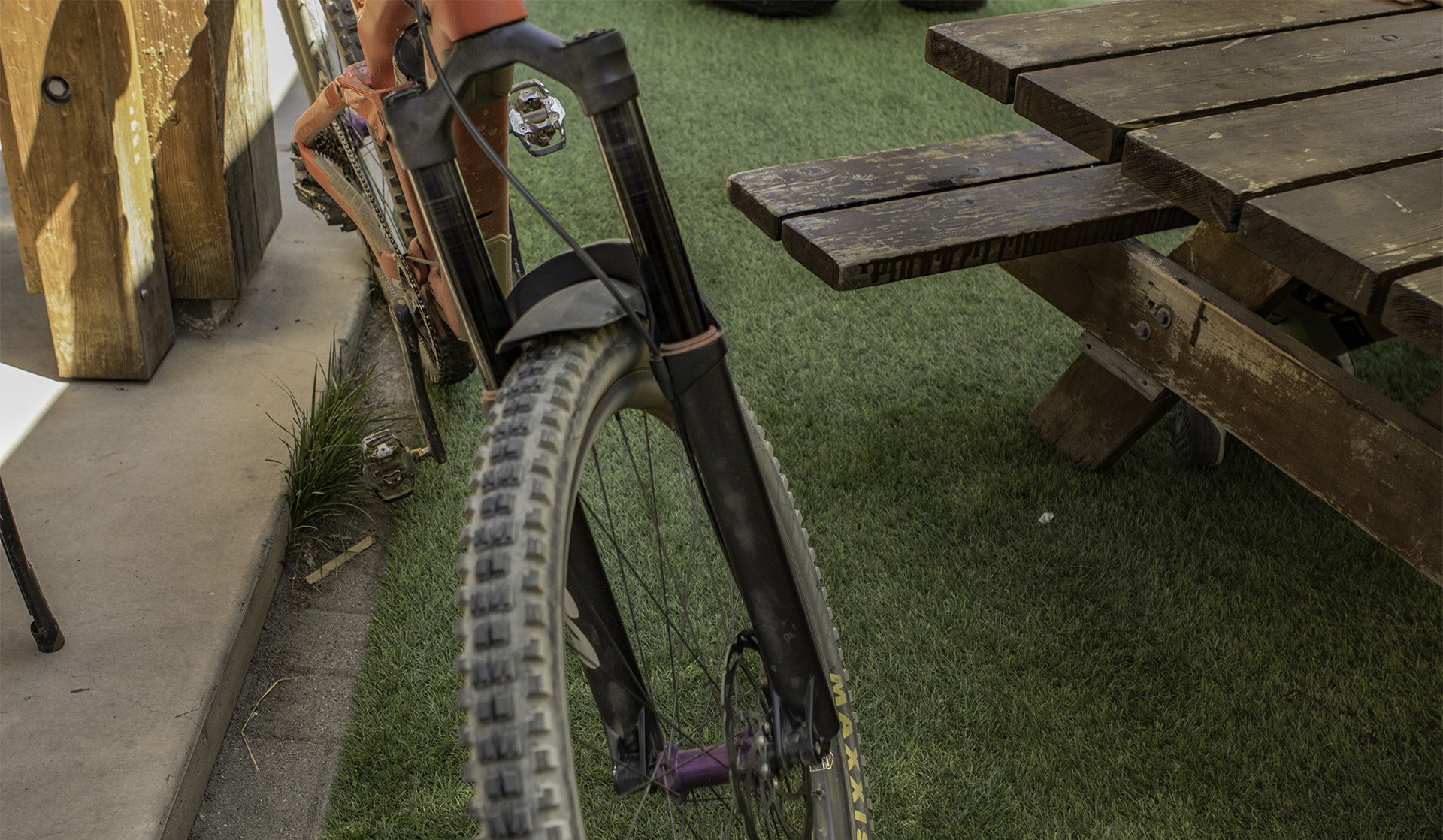 The new fork will compete with the Fox 36 and RockShox Lyrik, providing up to 180mm of travel in a 1992g/4.4lb package (27.5 model). For the first time cable routing can go up front, but Manitou purists can continue to run through the back door. The reverse arch makes the integrated fender look particularly tidy - and the arch itself is burly! 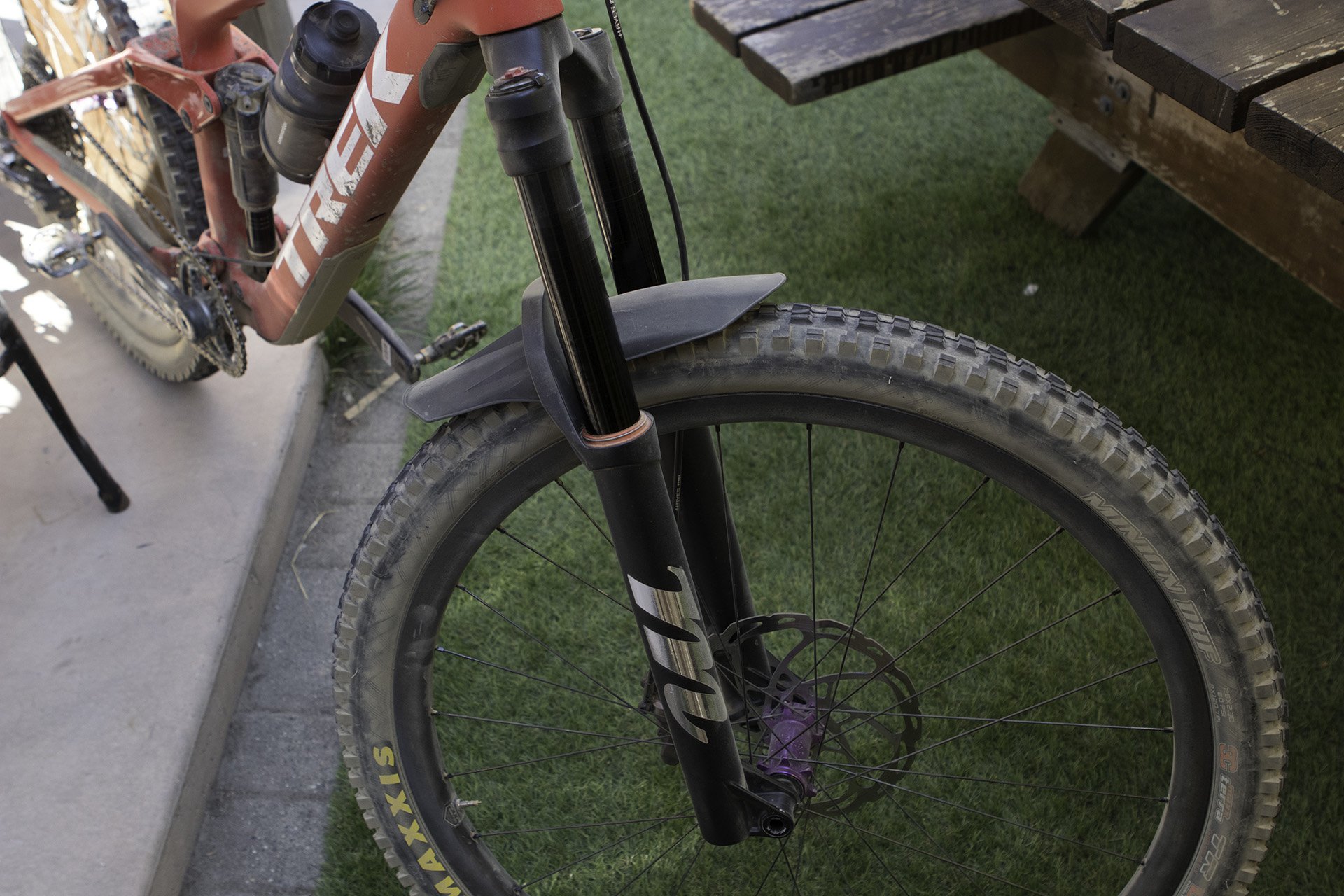 I wasn't allowed to shoot the back of the fork where the name is visible so this is about all we've got. The fork will come with either with the VTT damper (3 position) or the high-end MC2 damper which will also include IRT - a mid stroke compression adjustment that operates independently from the bottom out circuit. The lower-end fork includes the top model's IVA bottom out circuit.

The Hayes Group  hired industry veteran Jon Swanson in 2017 to head up the product division of the company. Jon has worked as a product manager for the last 20 years, most recently with Giant and Fox Racing, and he's keen to get all the brands under the Hayes umbrella in sync. Jon told me he also got the nod to work for Cervelo but he was keen on the challenge presented at Hayes, not to mention having a reason to ride places like the Whistler Bike Park. 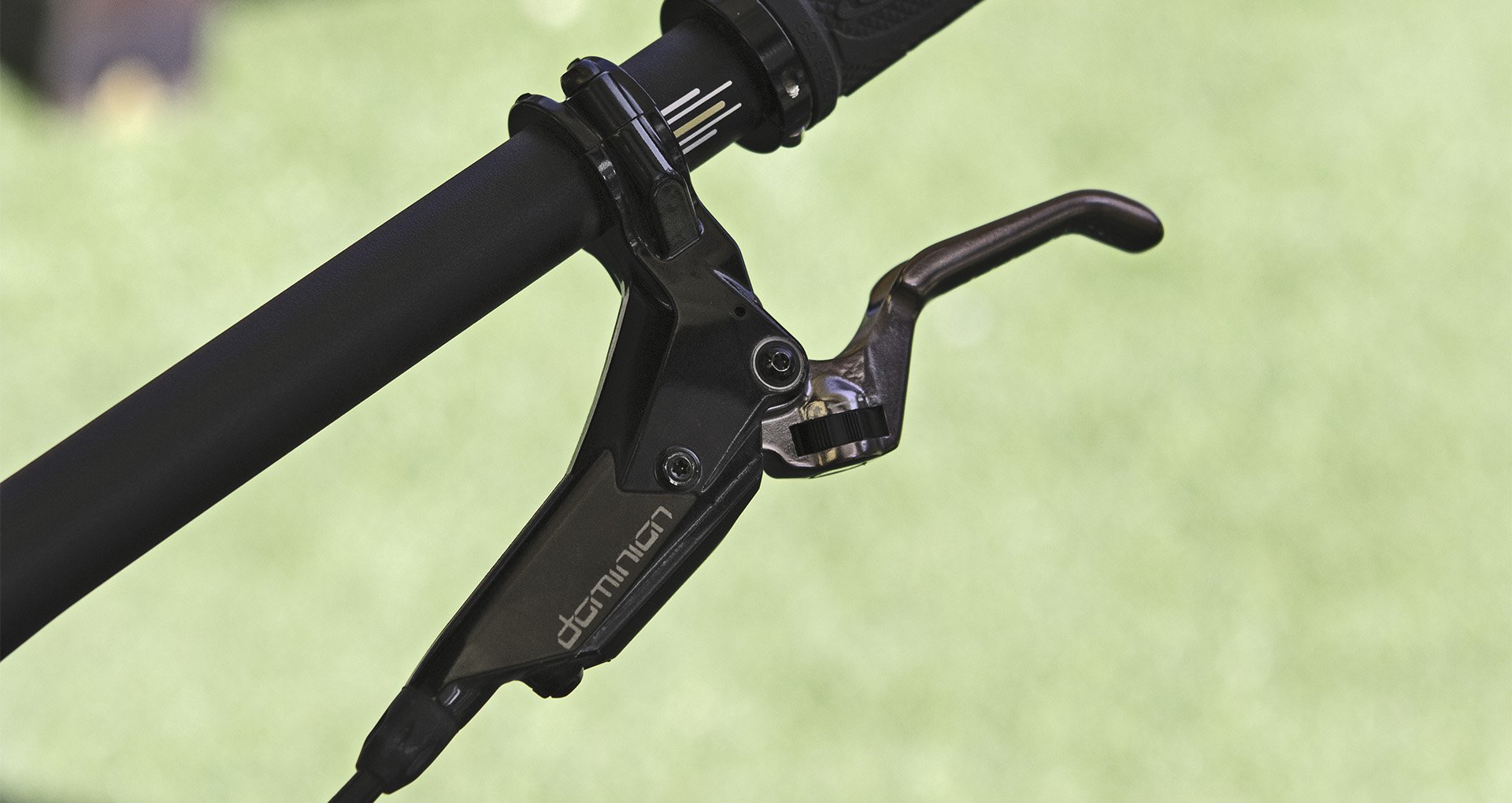 I can't remember the last time I saw a Hayes Brake on a high performance bike that wasn't ridden by someone sponsored by or working for Hayes. The feel of the Dominion A4 could change that. 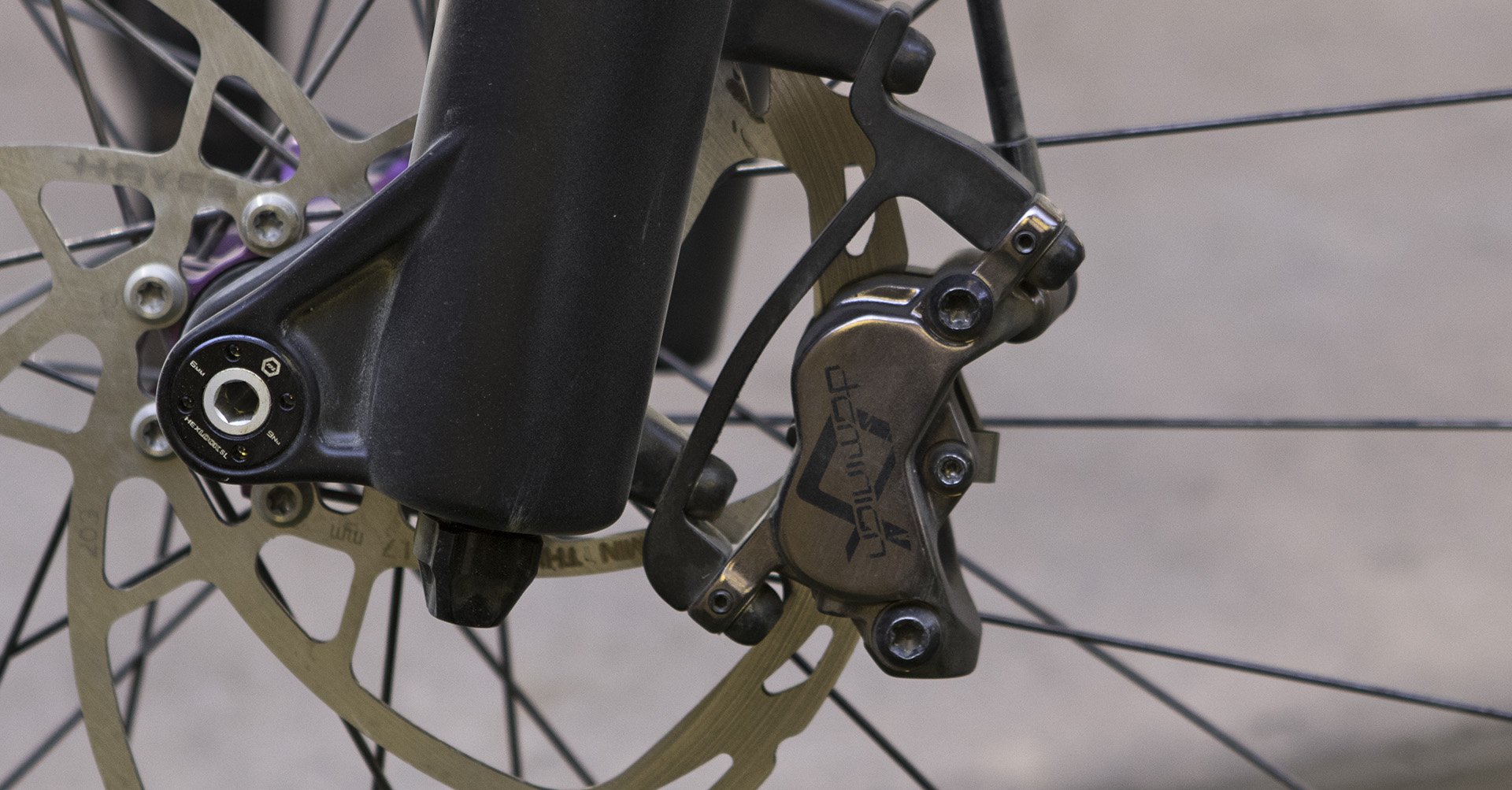 Tiny set screws for precise pad alignment will please the OCD types among us. And really who doesn't hate rotor rub? Four big pistons squeeze the rotor (and there is a bleed port behind each pair - also for increased precision) and much time has been spent creating something quiet. Incredibly light lever action and ruggedly positive pad contact made me keen to get these for a test.

With both SRAM and Shimano having some brake issues in the past few years it seems like we've never been quite as ready for a born again player. The Hayes Dominion A4 Brake is compatible with both Matchmaker and Shimano's I-Spec mounting systems to keep your bars clear of multiple clamps. If you are ordering a set you'll have to specify beforehand though since both won't be included. 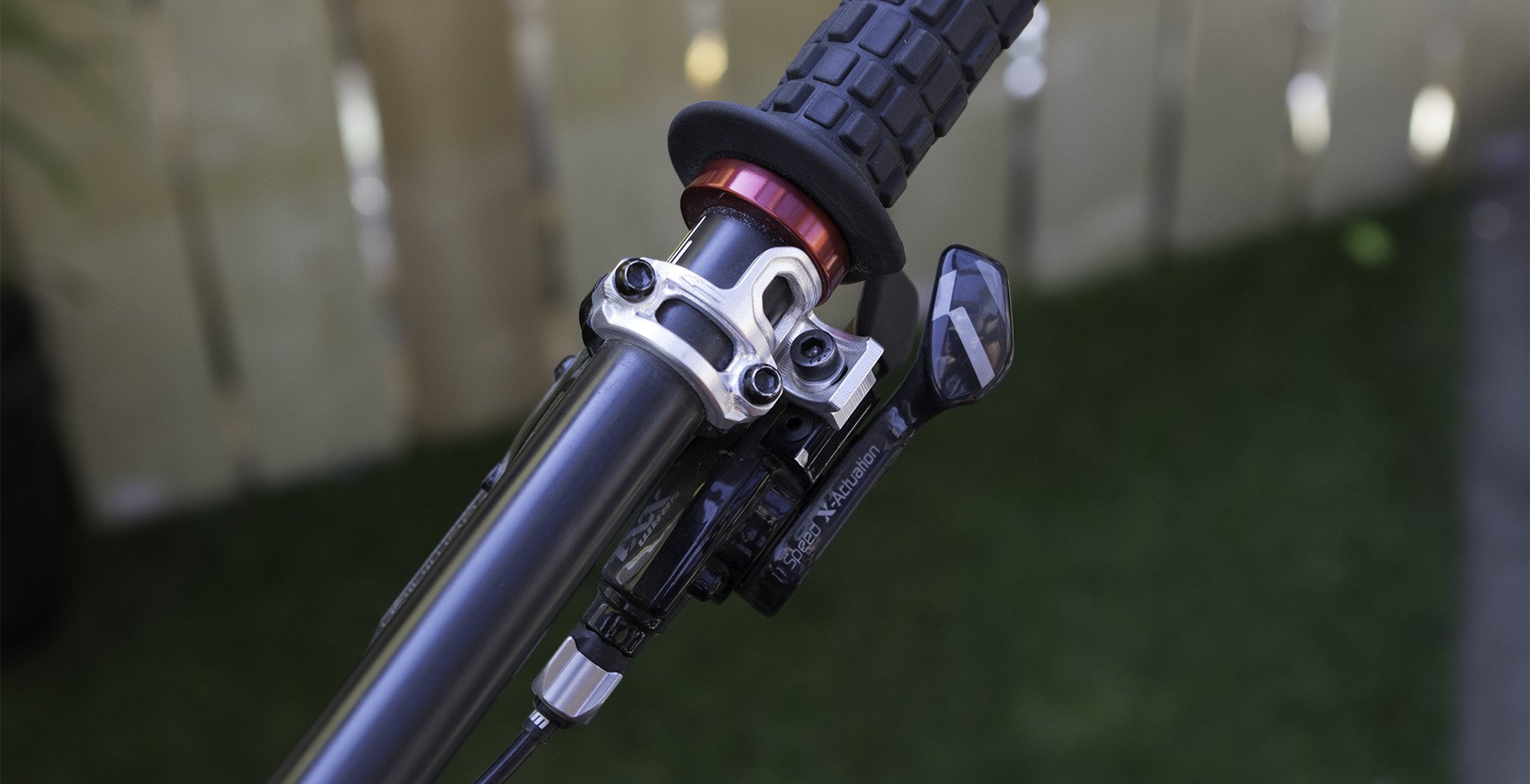 Hopefully by production time these Matchmaker or I-Spec adapters will come in black to match everything else.

SUNRinglé hubs were once objects of mountain biker lust as well and a new rim and reborn Super Bubba hubs - which of course are available in purple - are on the horizon. Rims are of course going to be carbon at the top end and the hubs buck the recent trend by pulling the spokes without a J-Bend. 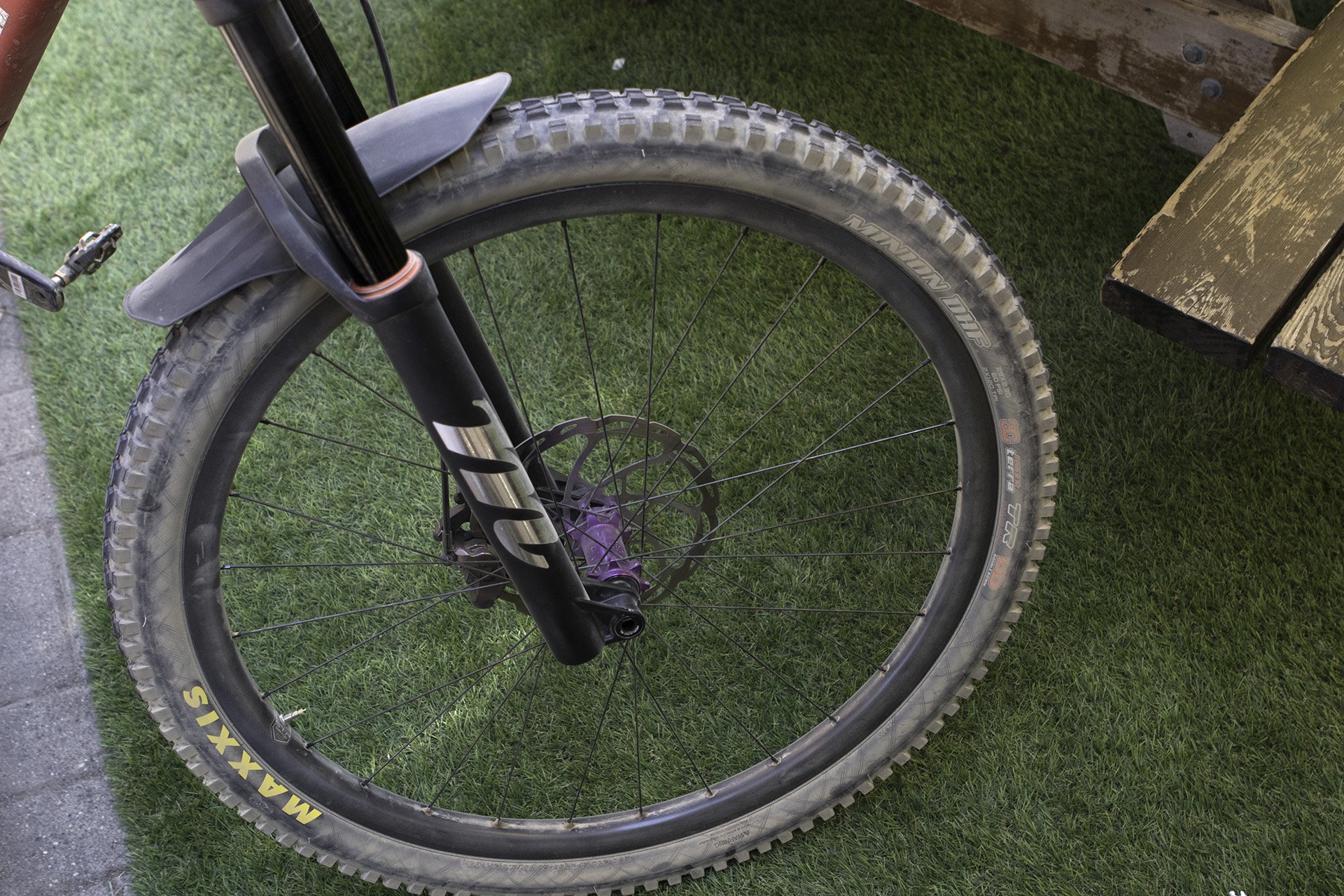 Carbon rims and another look at the fork. 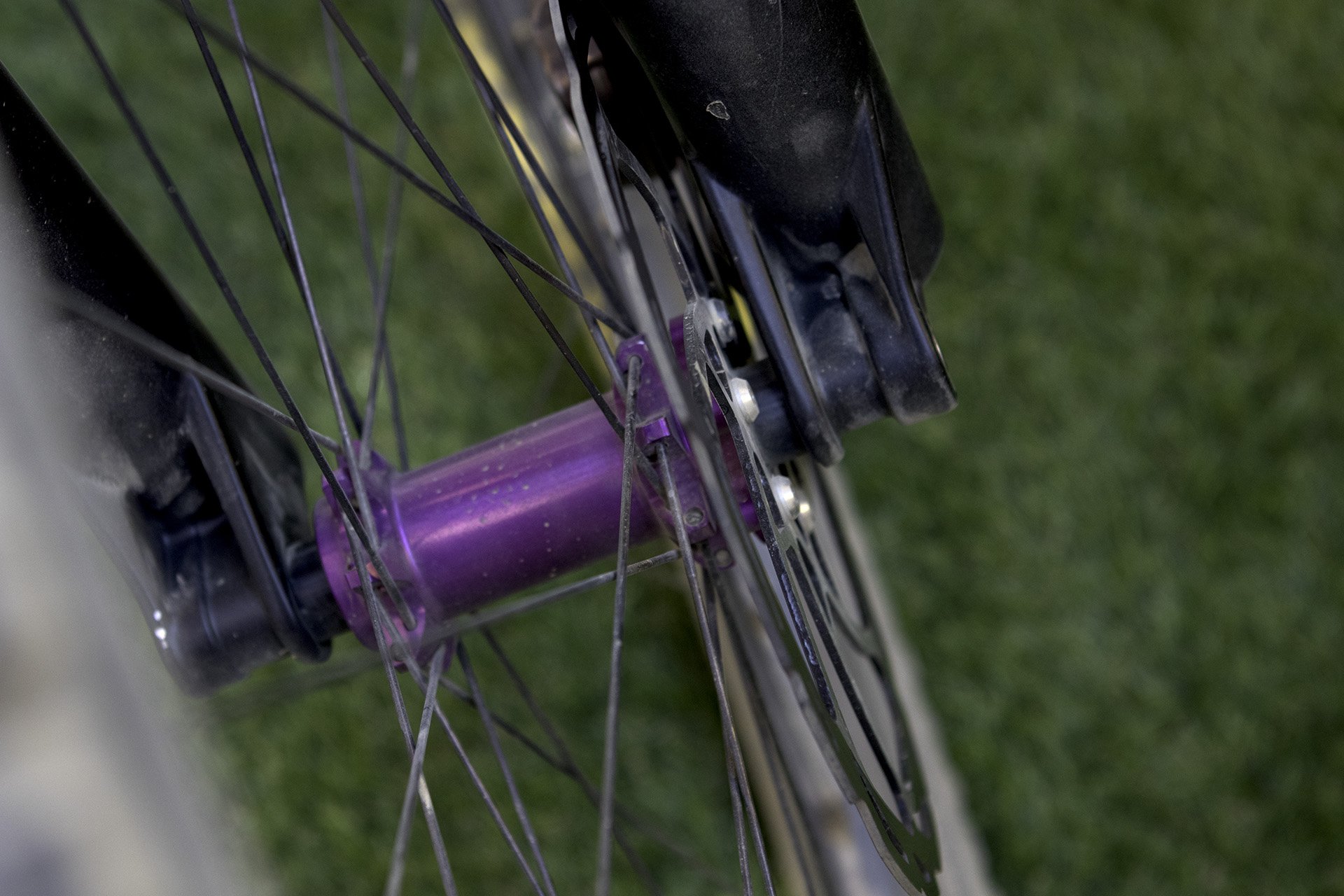 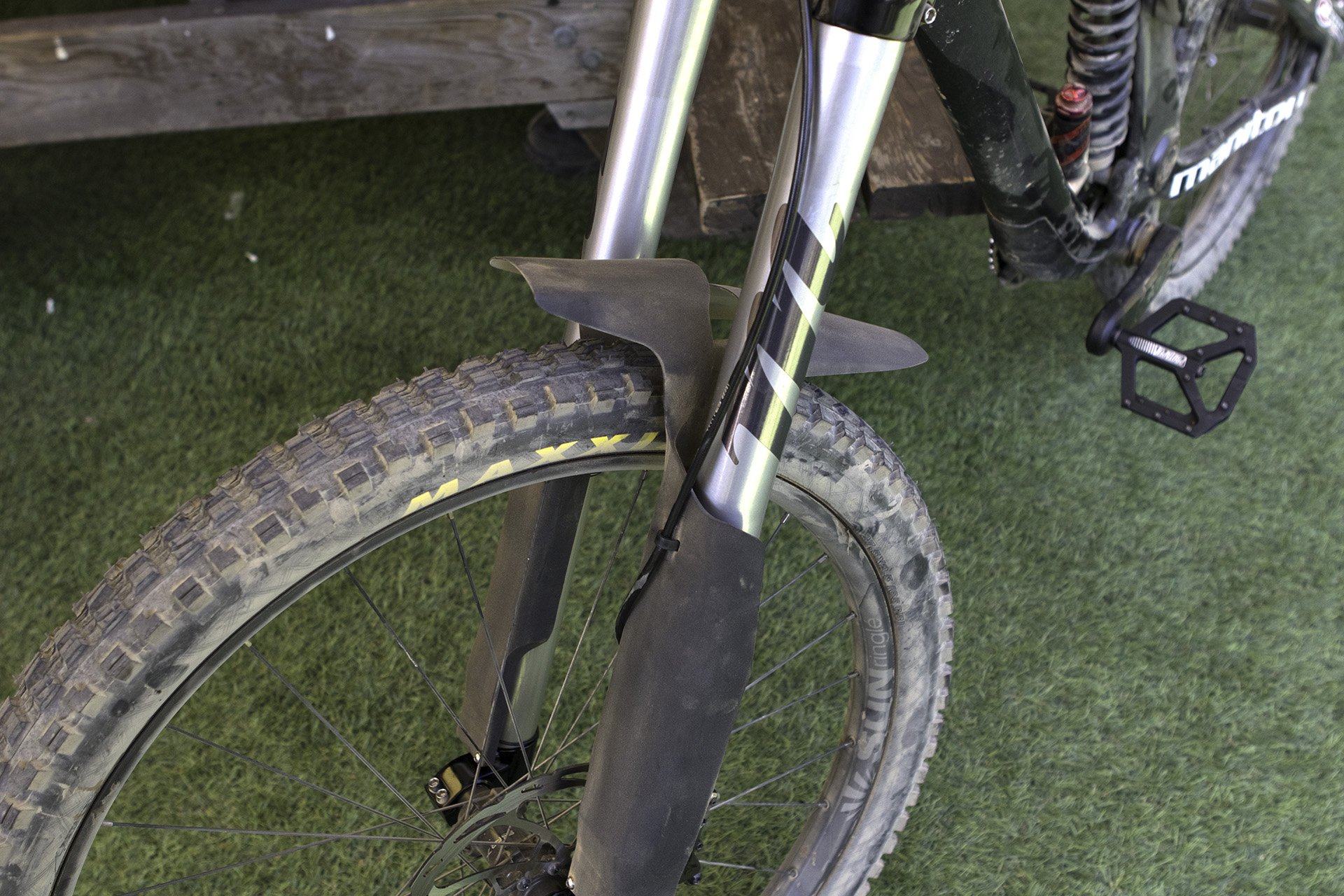 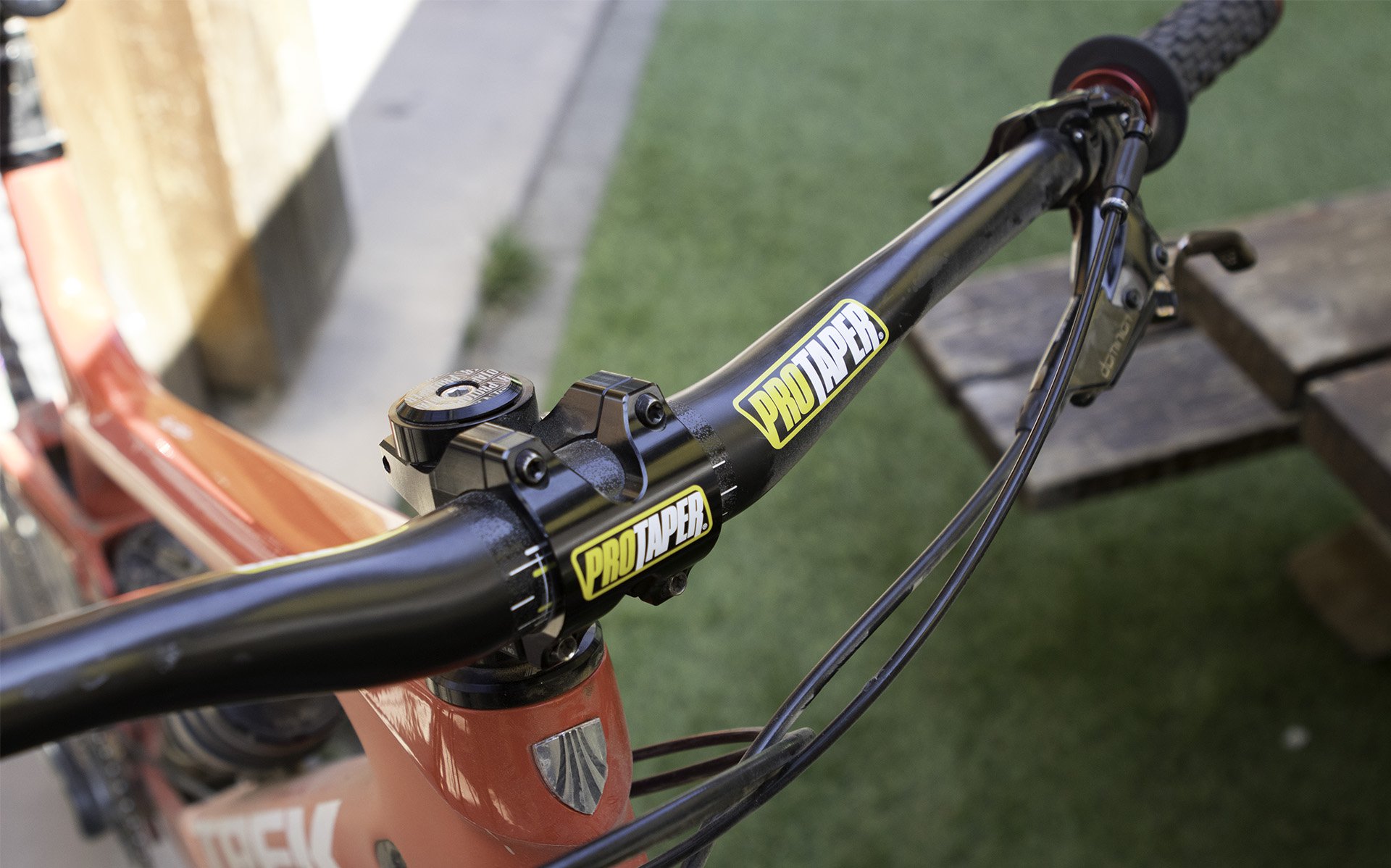 Pro Taper bars and from Answer were another industry leader. It might be time to update that logo. I haven't been itching for a splash of white and yellow on my bars and stems.

Also on the horizon from Manitou is a new dropper post which we'll be getting our mitts on as soon as possible.

With so few dominant players, particularly in the brake and suspension segments, the prospect of more quality options is a breath of fresh air. And it's always great when you can find a performance advantage on your buddies while riding something a little different.

For more check out Hayesdiscbrake.com

Any chance those adapters will be cheaper than and compatible with Magura Shiftmix? $60 is a bit much to pay for tidyness.

Why has nobody thought of set screws for brakes before?!? The OCD in me is opening up my wallet. I have fond memories of moving from mechanical discs to the Hayes Mag.

Have been on a Mattoc Pro with IRT  for a couple years and it’s been stellar.

They patented it back 5 years ago if I remember right. No one really saw it since they haven't released a noteworthy brake until now. I think the last brake they released was the Radar and that was hardly noteworthy.

I have it on my Hayes Prime, which have been problem free for the past two seasons.

I had a set of Prime Comps which were problem free as well.

Yes please to hydraulic bottom out instead of spacers.  I'd LOVE to see them find a way to do something like this on rear shocks.  Keep away from bottoming, but without such an abrupt ramp up at the end.  Manitou fork damping of old was very, very good, shocks, not so much.

Spare me my Sheldon Cooper moment: IRT and IVA are AIR chamber modifications, not hydraulic ones. The former one consists of a dual positive chamber, while the  latter one it's Manitou's way of referring to volume spacers. The bottom out adjustment It's called HBO. They are all present in the actual Mattoc line.

And the Dorado had carbon uppers, not stanchions.

Of course it was the uppers. Thanks for pointing out my brain fart. Cheers.

I've been on a Manitou fork or shock consistently for the past 11 years.  Swinger 6, ISX 6, Minute Pro, Mattoc Pro

I've been thoroughly impressed and the addition of a burlier fork than the Mattoc is nice to see.  I am glad they are stepping up to the plate as another BIG player and not staying in the fringes anymore.

One key to their success will be service (manuals for customers/shops), support and warranty.  If they get this right then people will be more comfortable with their purchases and not left in a panic when they need after purchase service.