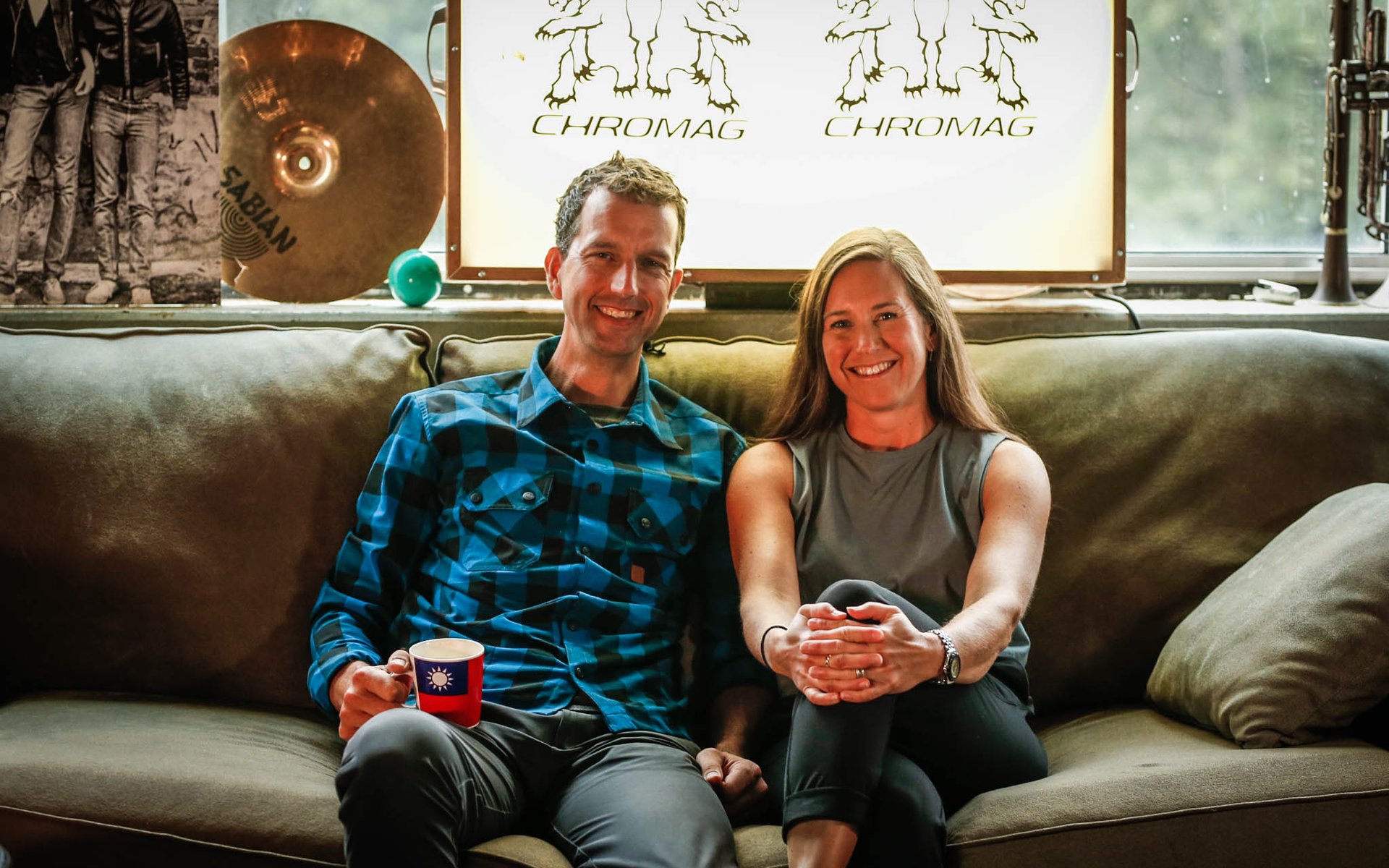 It all started at the kitchen table with an idea for a frame. Ian Ritz was working at a bike shop in Whistler at the time, and he had ideas. Specifically, an idea for a hardtail, and it wasn't like any hardtail you could buy at the time. Along with a few friends, he came up with a frame that was more along the lines of what they wanted for the trails they were riding in and around Whistler, which aren't much different than a lot of the trails you can find in Whistler now: steep, rough, and rowdy. The bike park may be what the world associates with Whistler riding, but there is a long history of progressive trail riding all over the valley, and over the years, riders and staff connected to Chromag in one way or another have had a big hand in that. 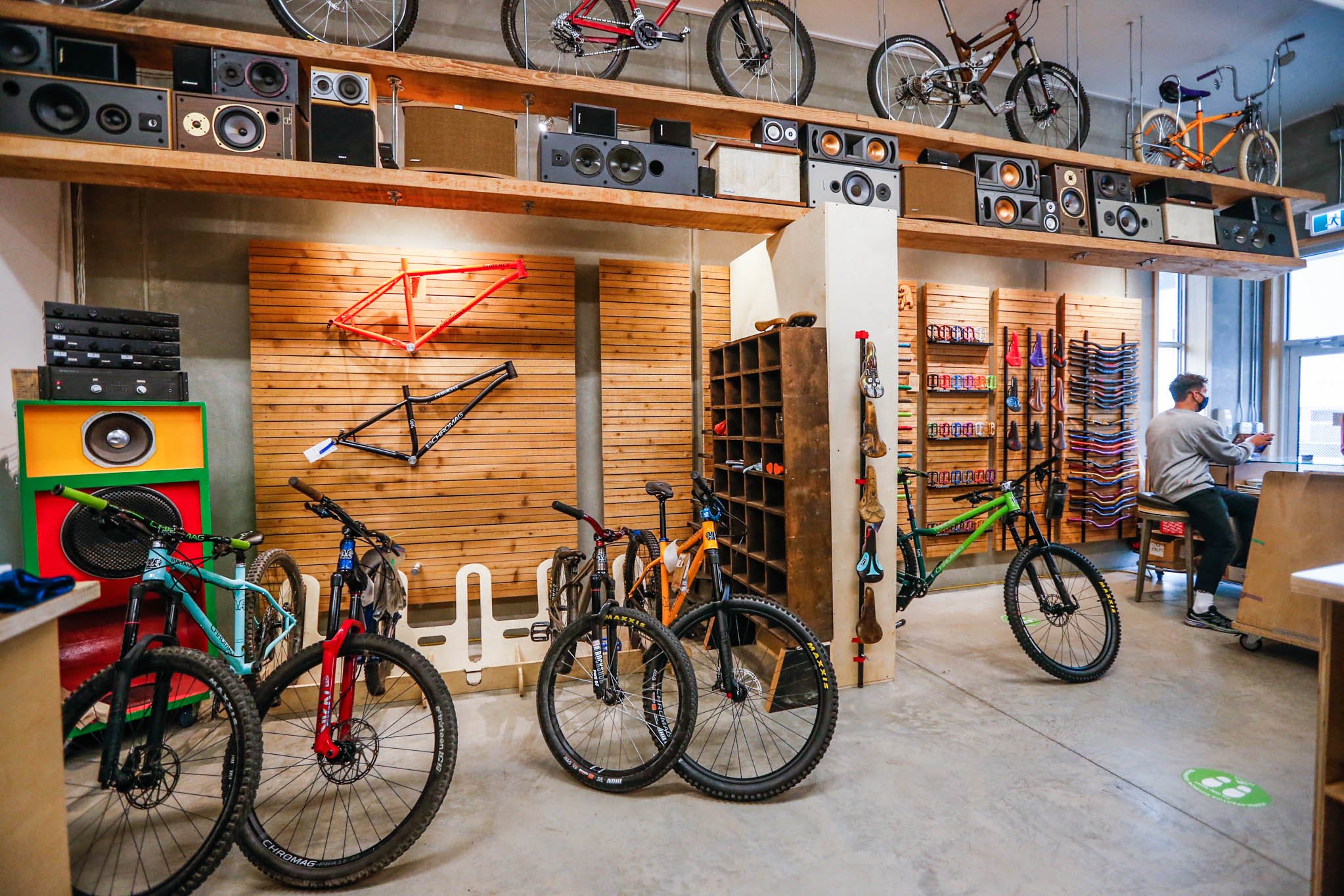 As Chromag have grown, they've been able to dedicate space to a proper retail setup. If you're in Whistler, head to Function Junction and poke your head in. Just set your budget before you walk in that door, because you'll want one of everything they have in stock. 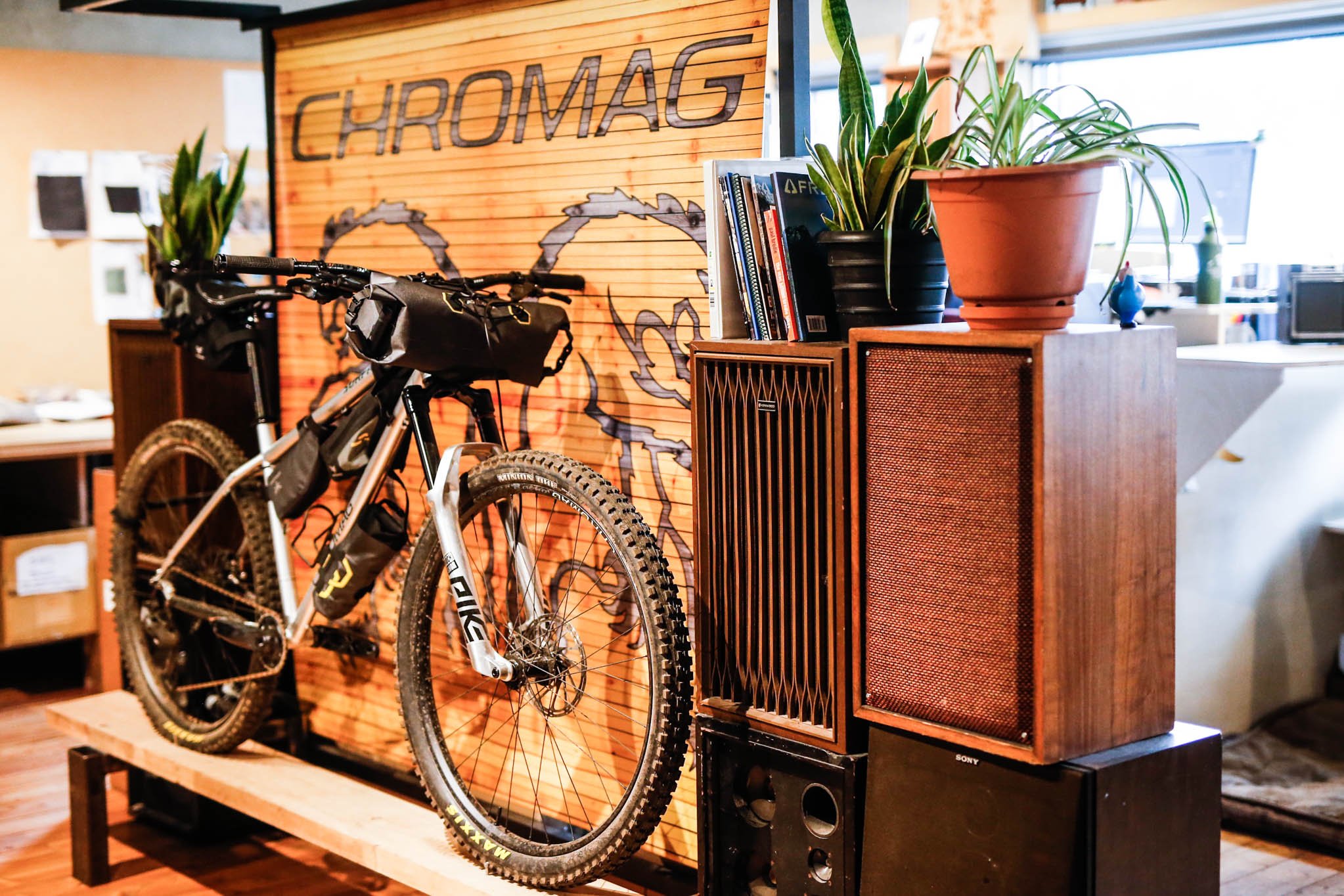 Everywhere you look in the Chromag office it seems like there's something else awesome on display. 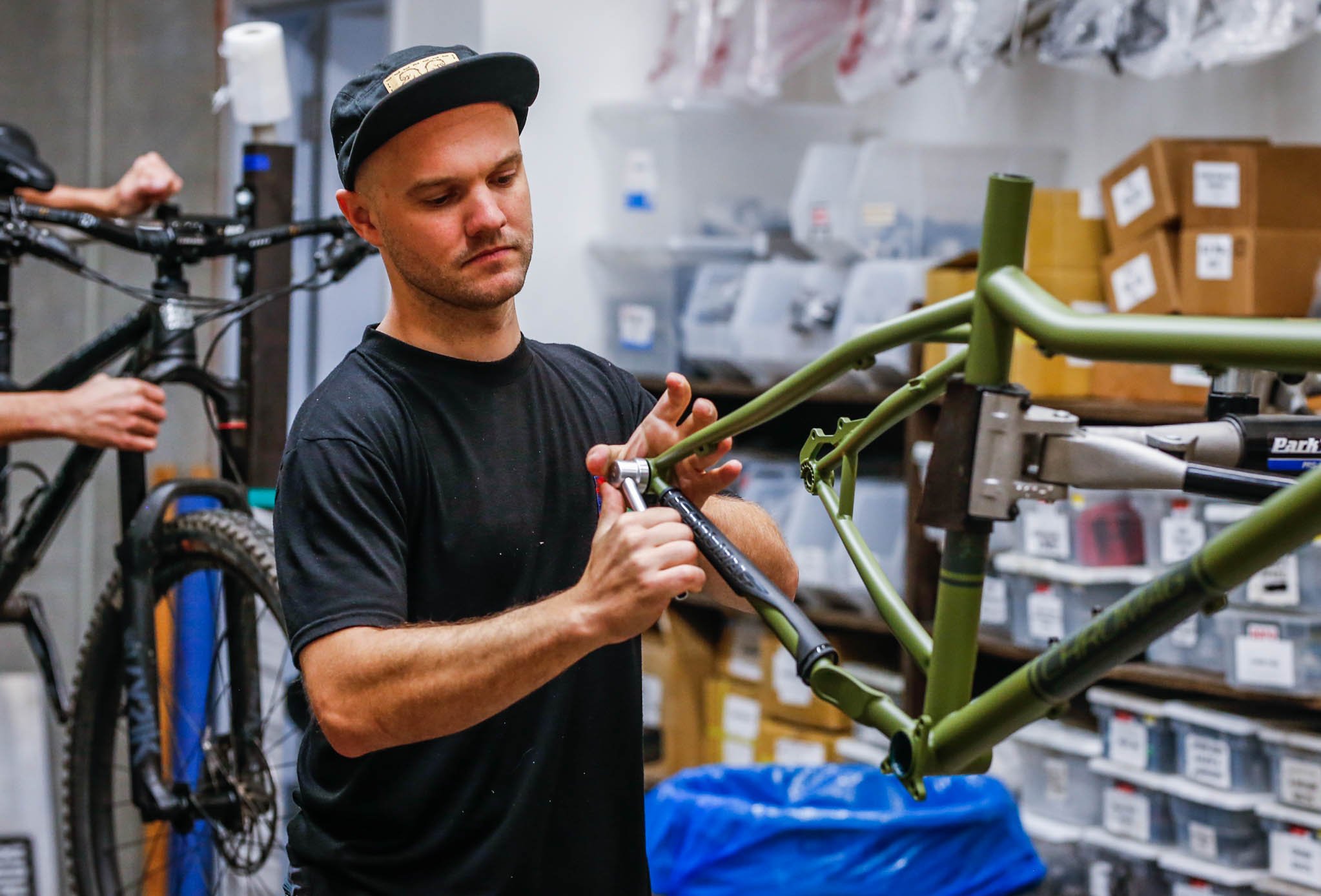 We didn't ask where this hardtail was headed, but it could have been Vancouver or Vienna. Chromag has a pretty strong international presence for a 'small' brand. 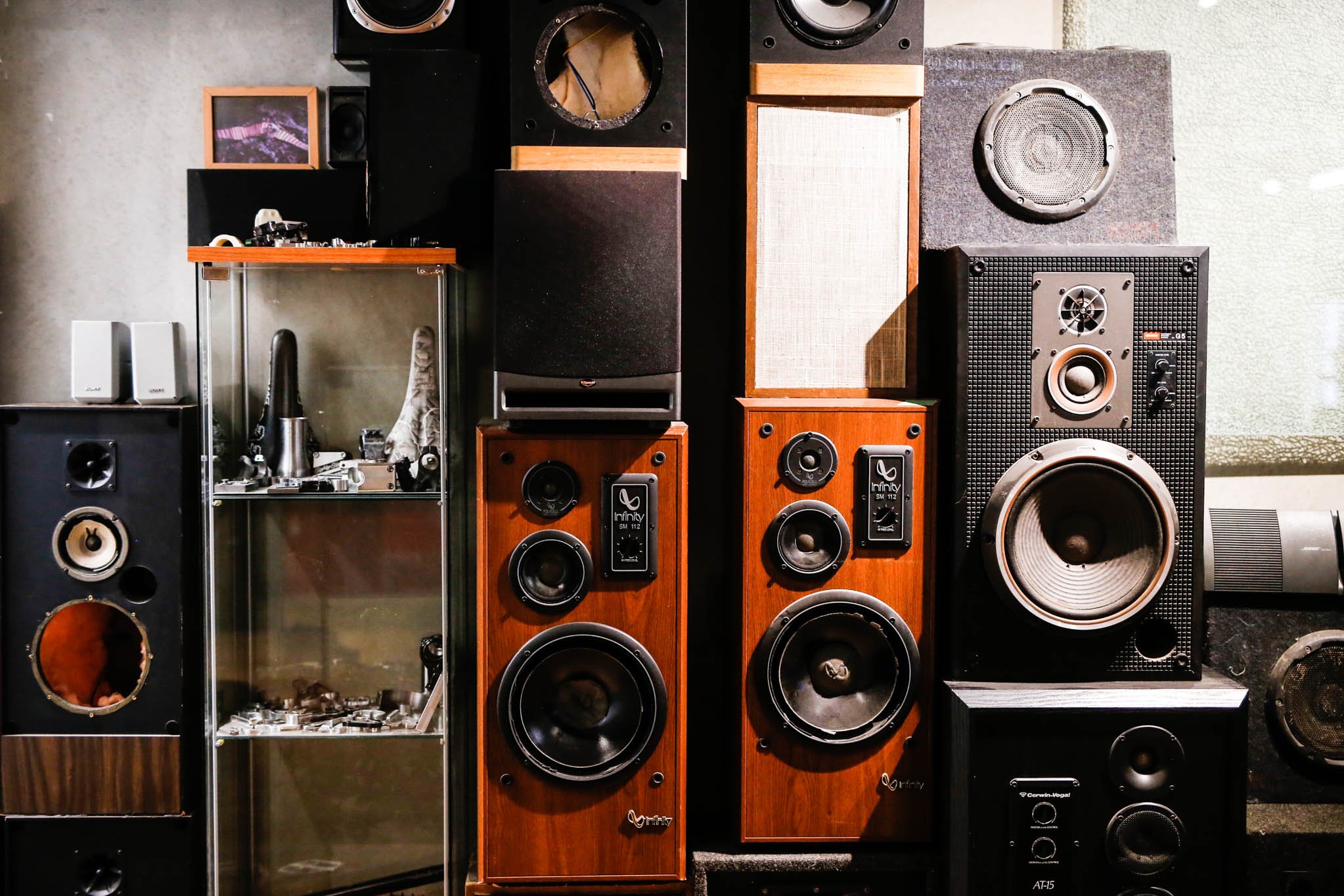 There are speakers everywhere at Chromag HQ. 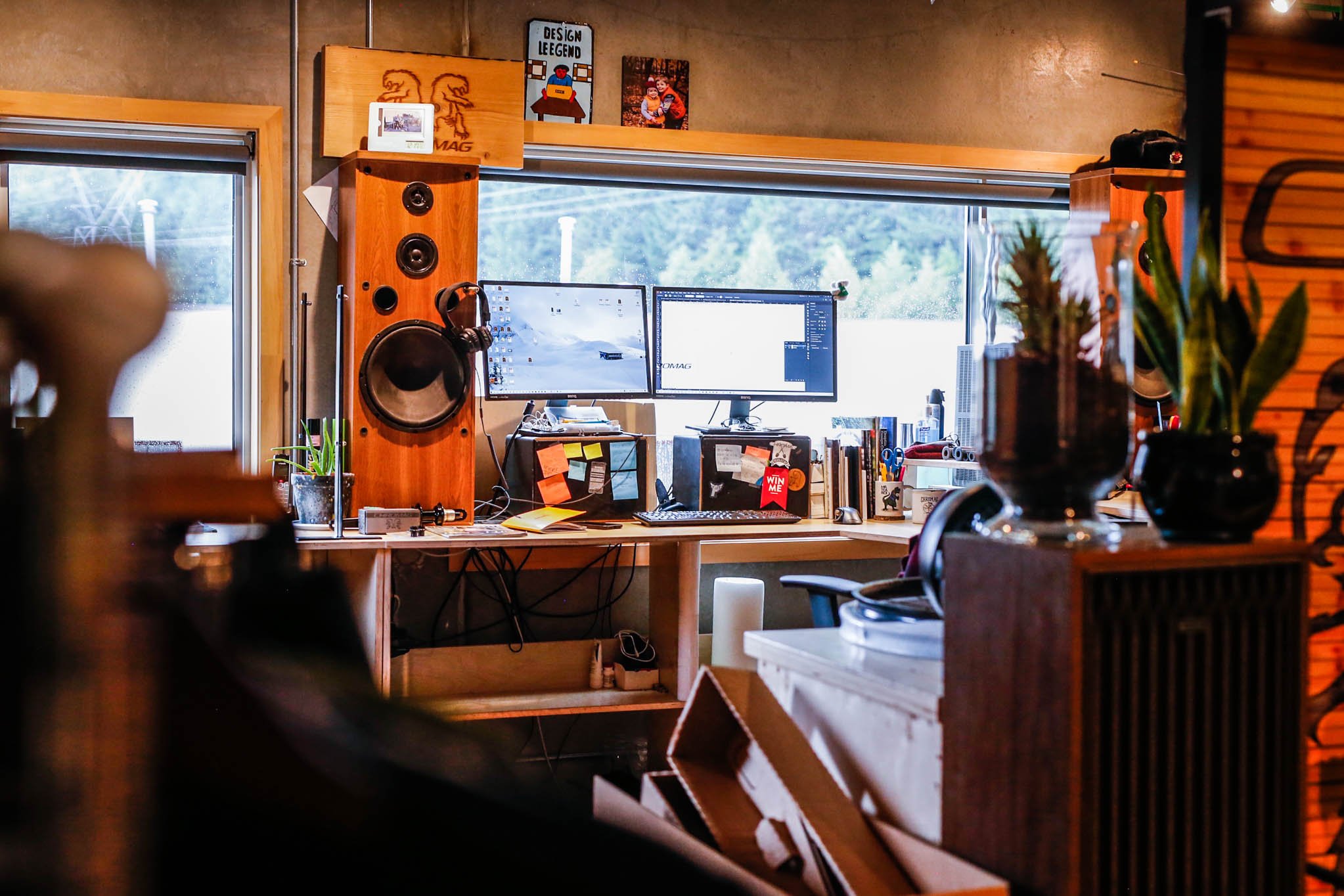 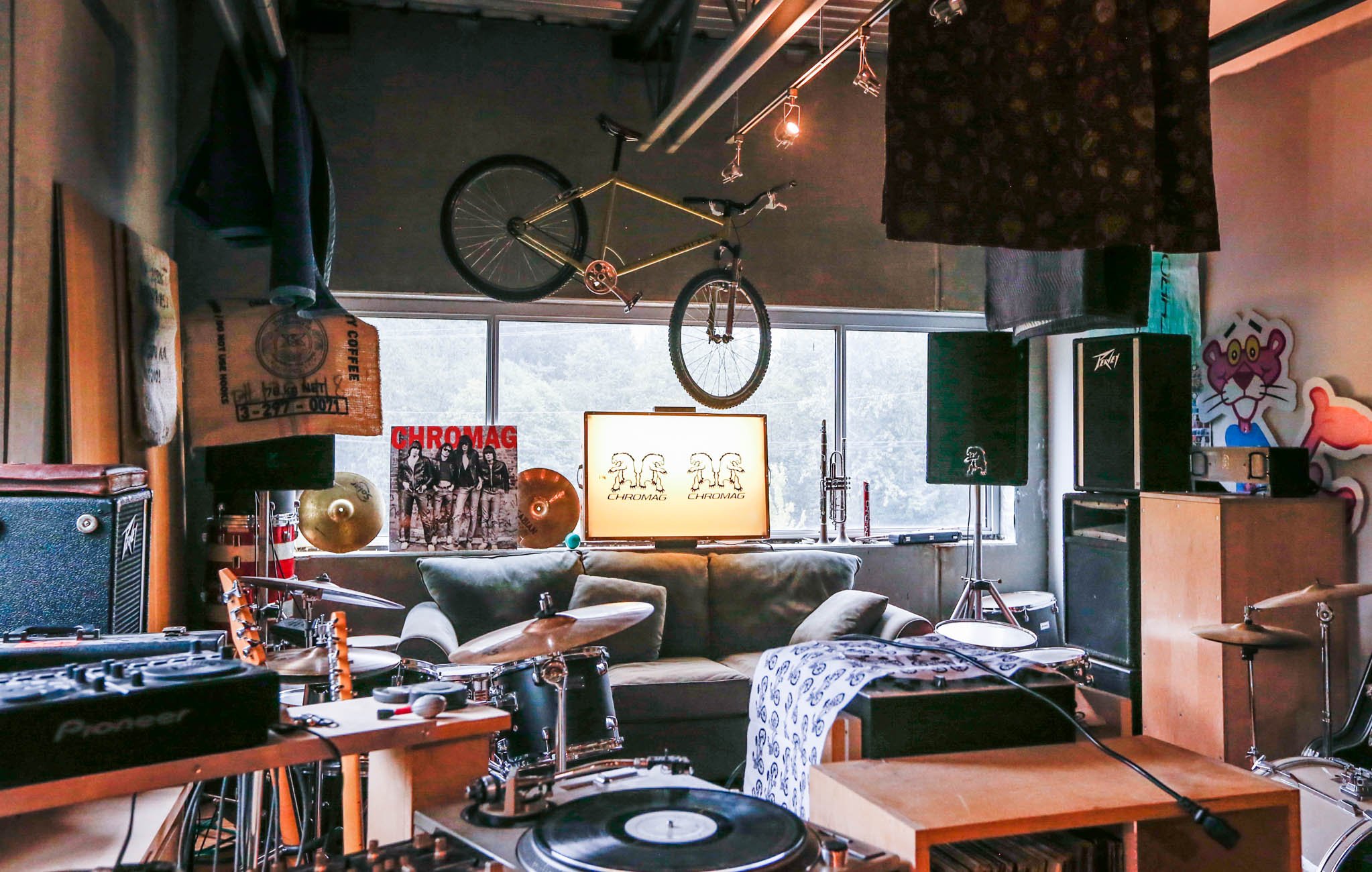 It's hard to put a finger on what has made Chromag so successful. To say that it is a cool brand is both a wild oversimplification and an understatement, but that doesn't make it any less true. It probably has a lot to do with the fact that being cool was never an important part of the formula, but it happened anyway. Ian and his wife Rebecca are both very down to earth people who care deeply about their staff, and there isn't a lot of turnover at Chromag - most employees stick around once they start working there, and a recent spate of successes means they have grown a lot in the last five or so years.

And yet the feeling is the same. Friday rides still happen with stunning regularity; rain or shine, busy or not. Chromag HQ - now much bigger than the last space - is still covered in photos, art, and memorabilia. There are so many musical instruments and speakers - the speakers are everywhere - that it seems like they are a part of the building itself. Hardtails are still at the core of Chromag, but the brand is ready to grow again. Rumours of a steel-tubed dually have swirled for years, and last year they released one, but in their typical unique way, they released the kids' bike first, because it was ready first. No contrived marketing story or timing. Just simple and straightforward. Just right.

Their story is a little different than the others we've profiled so far in the Makers series, but even though Chromag's products are not made within their own four walls, there is still a local connection. From the beginning, the relationship between Chromag and their neighbour, North Shore Billet, has been crucial to the success of both companies (and yes, our next Makers video installment will feature NSB).

Chromag may have grown, but it's still the same company, and the chase is the same, too: bikes and people come first. And music, because bikes and people and music make for the best parties. 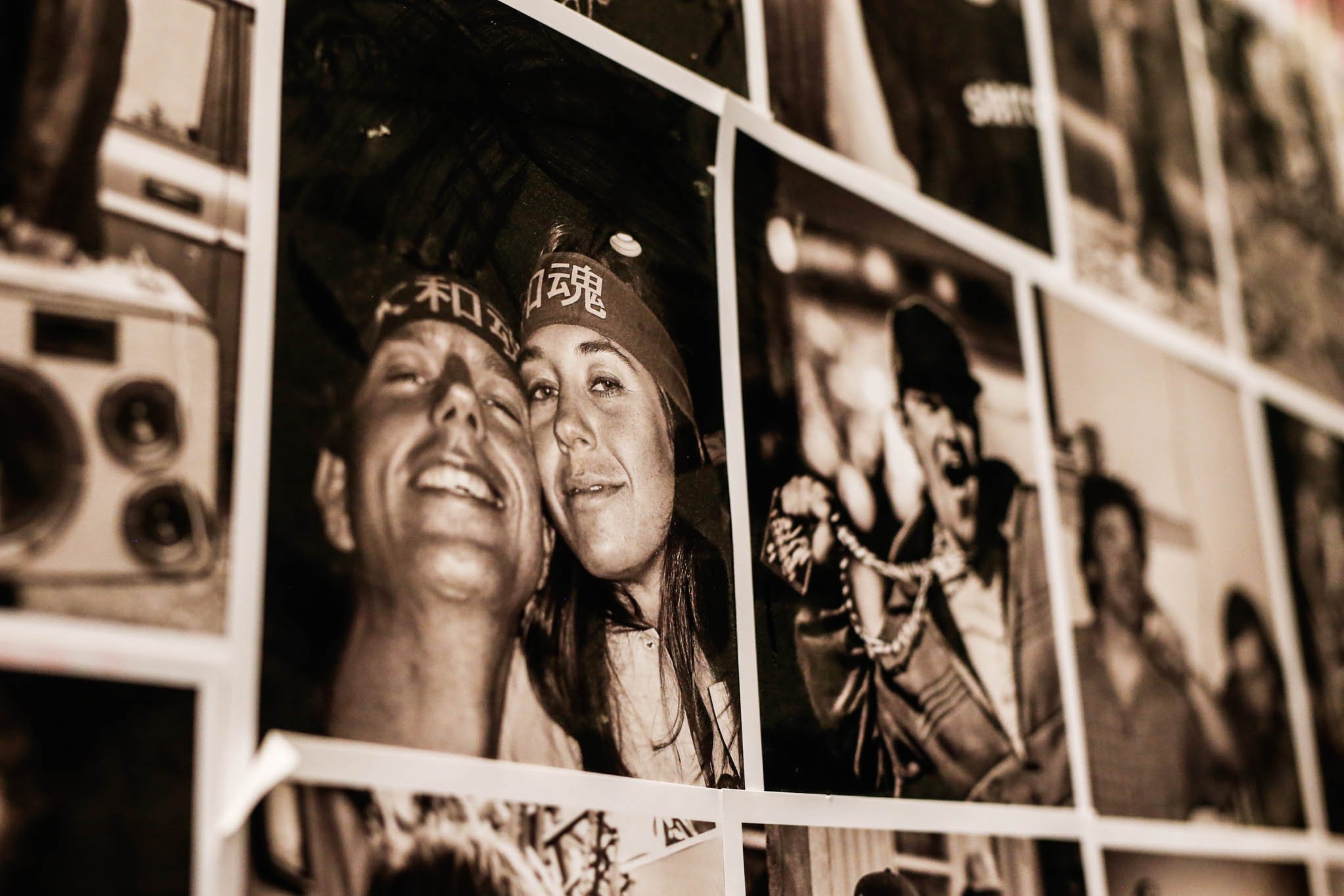 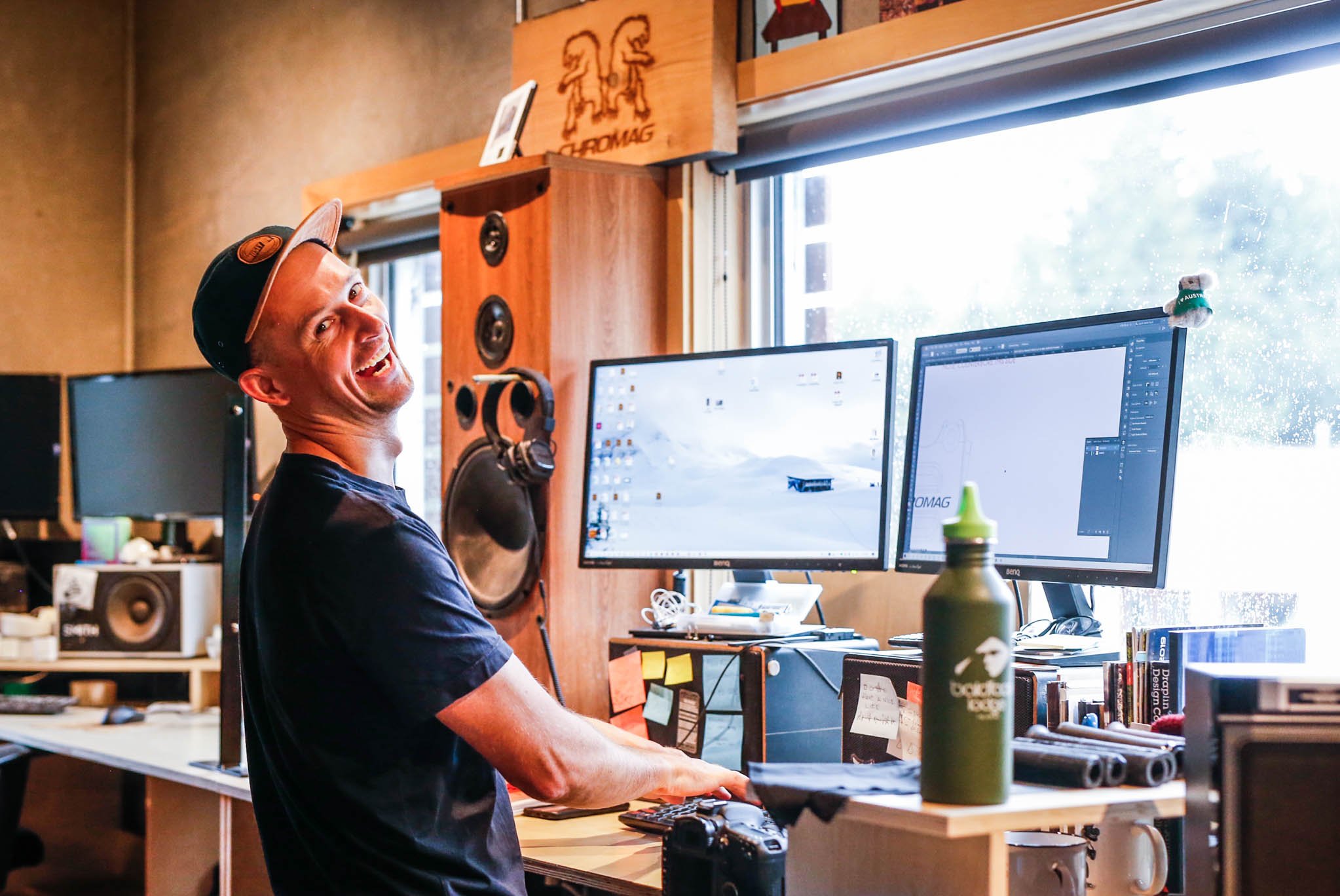 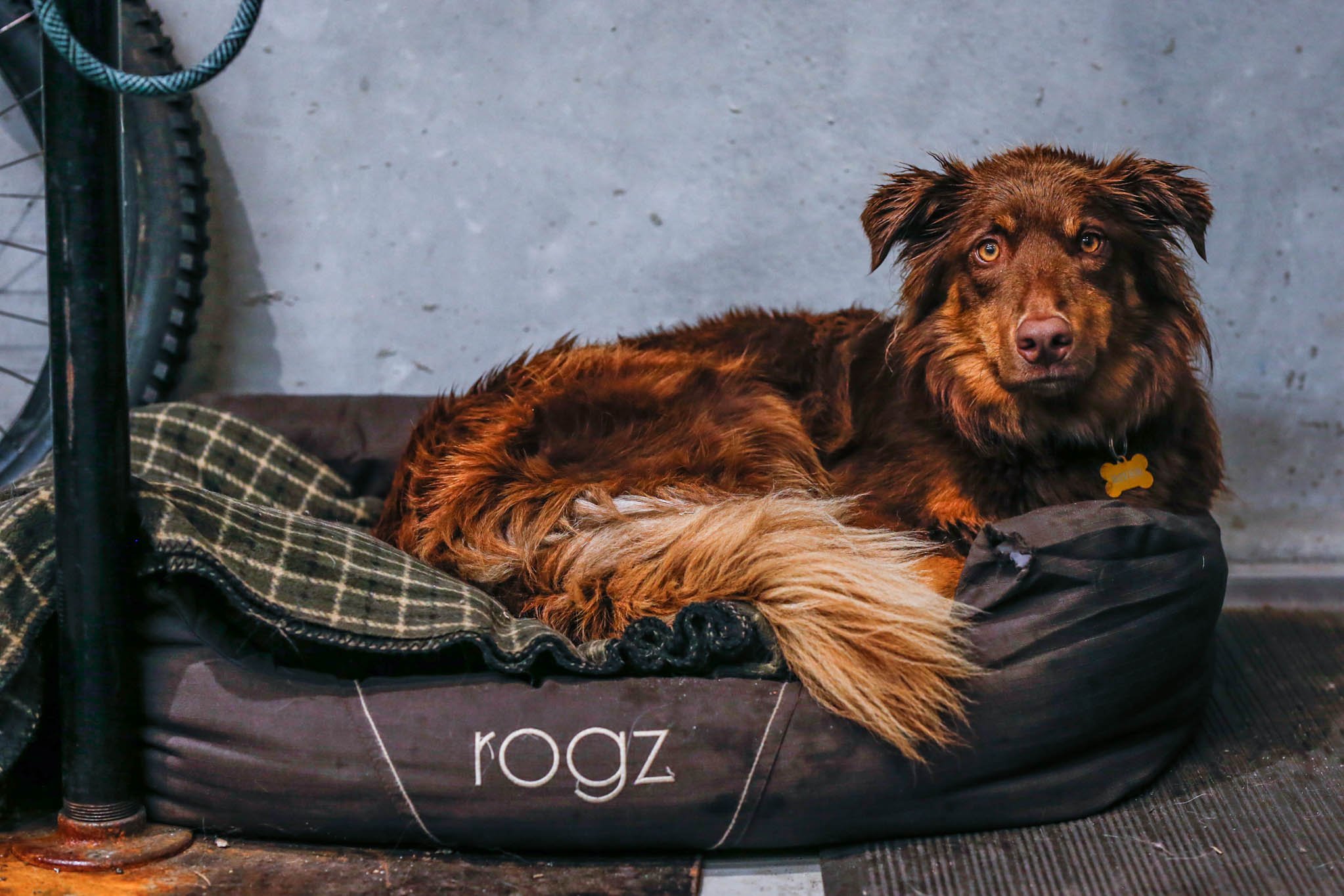 Check out the rest of the MAKERS Series:

The Makers Series was made with the participation of the Government of Canada.

Behind the Brand: Chromag Bikes

How About That Chromag Doctahawk?

Makers: We Are One Composites and Dustin Adams

Great addition to the makers series!

A little story from my recent interactions with Chromag... Due to inattention, and lack of care on my part, the dropper post in my 2019 Chromag Primer seized. Through their instagram, I found out that Chromag mechanic Pete Fowler (@pinnermachineshop in instagram) had built a jig for removing seat posts.

At the end of 2021, I reached out to Chromag and scheduled a drop off time. Showed up with my frame in hand. Spoke with the guys, and they told me to come back in an hour or so. Went down the street to grab a coffee.  After an hour of work the seat post had been removed from the frame, unscathed. Left some beer, picked up a few things in their shop and was on my way.

Customer service was tops, and the best part of all, neither my frame or seat post were damaged in the process. I've owned 4 Chromags (Stylus 26", Rootdown v1, Rootdown v2, Primer) over the years and look forward to riding many more in the years to come. Wishing them continued success.

Such a great brand an a great team behind it. Good to hear them wanting to keep growth at a sustainable and manageable level.

Wow those are some antique Infinity speakers.

They looks good too. Makes me want to hunt out similar old speakers and use as decor, maybe turn one into a little cabinet w/ hinged door.

Love the brand, what they do, and how they do it. Interesting to have them in the "Makers" series though. My buddy who worked for NSB for years always joked that the don't actually "make" a single product.

We should take this opportunity to celebrate anyone who takes the time to design, build, and bring products to the market in our country. It is not easy, and we need to get behind this kind of effort. It can only lead to better outcomes and more opportunities down the road. Ian and the folks at Chromag are a big inspiration to us, and we commend them for all the efforts they put into the world! Chapeaux.

I resemble the comment about setting a budget before you go in and if you don’t you’re going to leave with one of everything.

Ha! And in recent years they've made it worse with a really nice soft goods collection, too.

How many frames would Ian have to weld personally to qualify?

How many pair of pants per year would Travis from NF have to personally sew to qualify?

Did Ian actually weld a frame? I'm not saying he didn't, actually wondering. They've had other companies fabricate every product they've put on the market. Like I say, I have no problems with that, I just don't think they fit the mold of "Makers".

With regards to NF, they produced many clothes they put on the market, so I'd say the pass the bar. Open to interpretation, obviously.

Another example could be Rocky. Good ol' Al welds every proto bike in their shop, but I certainly wouldn't expect to see them in the "Makers" series.

Such a cool company with loads of personalities and an attention to detail all around that definitly put them on "Makers" side in the industry. Yes, Ian isn't a welder himself, but he definitly can approach all the design and production challenges like a well experienced custom framebuilder plus they obviously produce a lot more thought through products.

The last time I bought a frame from them I was asking for a heavily tweaked version of one of their standard models, including geo tweaks, non-standart dropouts etc. The whole process with Ian was alot more professionel, on point and even faster than the experience I had with a well established custom frame builder - despite the fact that chromag had to hand over the drawing and material to Mike in Squamish, send the raw frame to Dekerf in Vancouver and in the end send it overseas to me. I have the pleasure to ride an awesome fitting, very beautiful frame and it says "Chromag" on the DT because it's been Ian and Crew making all ends meet perfectly.

I lived in Whistler in 2004 and did minor work at a shop, so saw a couple Cromags around, Tyler Morland had one and Chris Dewar.  Can't remember the model now - TRL or Samurai.  Didn't know at the time that Ian was running the show out of his living room and the company was less than a year old then, and only five or six bikes were made per year.

To be honest I thought my made in Canada Balfa Minuteman was just as good, but it was really hard to pedal as a tall guy.

Is the Saumrai of Singletrack still a thing?

Tony's SOS only ran 7 events, then was followed by 4 jacks/queens/kings.

This was an awesome take, thanks to all. But the squishy bike for kids might have been a mistake? The steel HT crew are so hardcore to the brand, they may not like this sort of Walmart style kiddy drop?

Interesting "walmart" comment. Outsourcing aluminum frames is extremely commonplace among well known reputable brands, and there are many very capable manufacturers out there. Is it "Walmart style" because it's aluminum, or because it's manufactured in Asia.

Regardless, the steel HT crew might be more impressed by the all-steel full suspension bike that Chromag is about to drop.

the minor threat is is far from a walmart bike. it is as high quality as a you’d expect from any other bike chromag would put on the market.

it is as light and well spec’d as you’d expect for the price.

my really-not-very-big wife is waiting for one to come into stock at our local chromag shop to give it a try. it will be the only bike that has fitted her since the original titus stopped making xxs frames.