Gee Atherton wins are like buses hey? You wait three years for one then two come along in a fortnight… With Gwin still trying to work out which size Demo he should be riding, the times were much tighter than last year, but where did Gee find that vital second?

As last week in Fort William, Atherton set the pace right out of the gate with only Hill, Smith and Minnaar able to get within a second at Split 1. Brook Macdonald was supposedly looking fast all weekend but was just over a second off the pace here. Interestingly Troy Brosnan and Loic Bruni were only 9th and 11th at the first split… 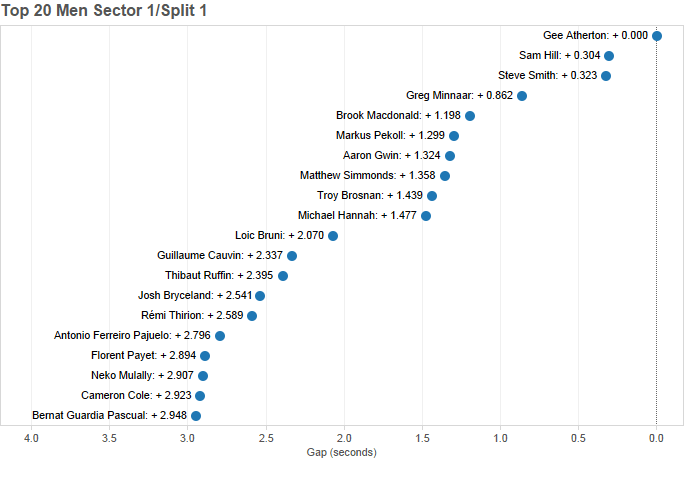 This was where the top order start to get shaken up as riders rolled the dice in search of the win. After a storming first sector, and looking truly back to his best, Sam Hill crashed out of the reckoning in Sector 2. Despite supposedly having a hard time in practice Greg Minnaar showed he knows how to deliver when it really matters and went fastest in Split 2 although Gee just kept it fast and consistent, only 0.021 seconds off Greg. Sector 2 was where Loic Bruni lit the afterburners and started to move up into the podium challengers. This acceleration put him in a group of riders between one and three seconds off Atherton at split 2 – Macdonald, Gwin, Bruni and and Brosnan all vying for the 4th and 5th place on the podium at this point… 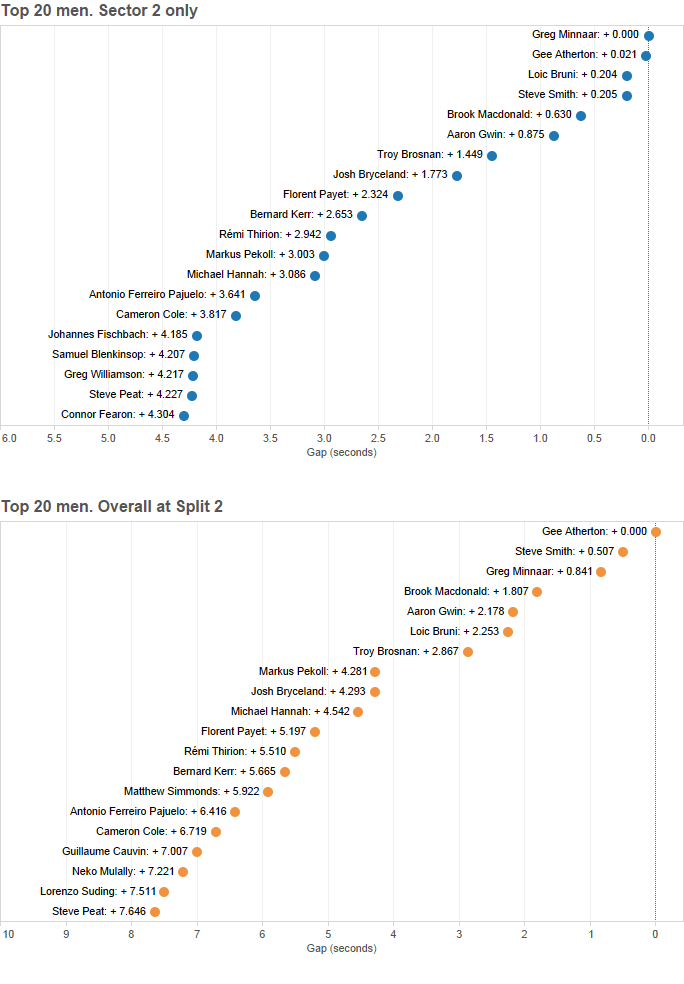 Atherton underlined his dominance by going fastest in the final sector to take the win overall whilst Smith and Minnaar could only manage to stay within half a second. After a slow start Bruni was clearly on a flyer, only 0.218 seconds off Atherton and good enough to lift him up to 4th place overall. The big losers here were Macdonald and Gwin. Macdonald crashed out but Gwin’s loss was clearly more subtle. Whatever happened he was almost 2 seconds off the pace in the final sector, 11th fastest. Gwin’s loss was Troy Brosnan’s gain. Despite only managing 9th, 7th and 7th on the sector split times, crashes and mistakes by others meant that this consistency was good enough to give Brosnan the final podium spot albeit by the tightest of margins – two thousandths of a second faster than his teammate Gwin! By my maths, if they were racing head to head this works out at barely a 2cm (less than an inch, for our American friends) gap! 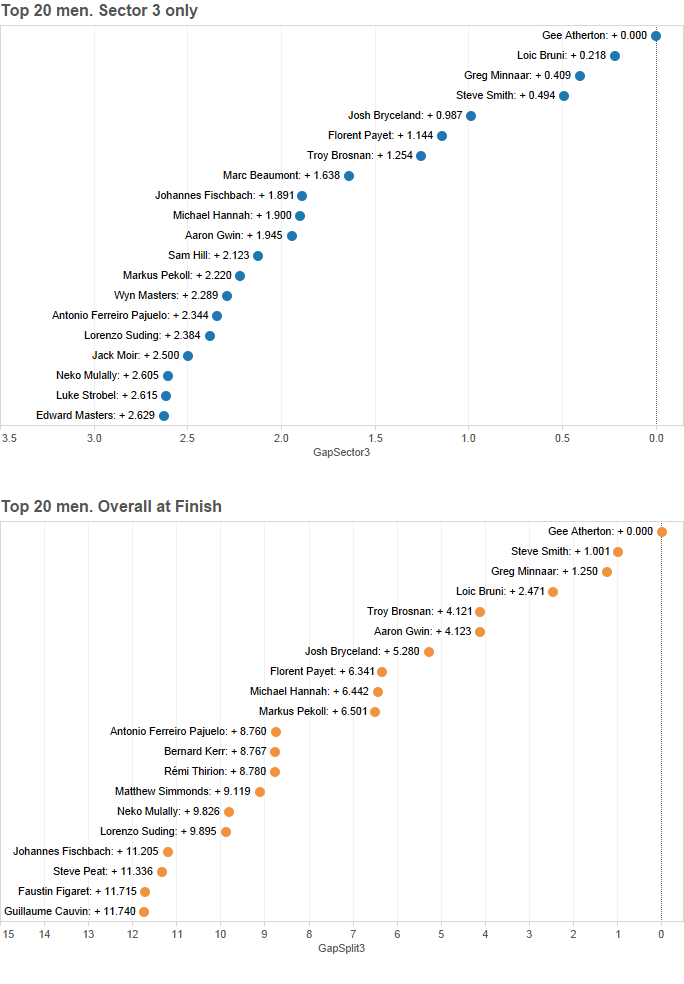 A couple more stand outs in Sector 3 – Florent Payet had a stormer with the 6th fastest time, enough to take 8th overall. This was his first World Cup top 10 since coming 6th in Maribor in 2007! Sam Hill also showed that a crash and a left knee pad around his ankle don’t slow him up too much, picking himself up to come in just behind Gwin on the sector in 12th place.

Where was it won?

Again, Gee dominated with a consistently quick performance, first in Sectors 1 and 3 and only two hundredths of a second off Minnaar in Sector 2. The steep, rough nature of the track took a few high profile victims this year, most notably Hill and Macdonald, and these crashes meant that those that could hold it together and put in a consistent performance had a good chance of doing well. Only the top 3 riders managed placings within the top 4 on all three sectors and Troy Brosnan benefited by sneaking into the top 5 despite never placing above 7th on any given sector. Further down the heatmap you can see how hard it was to have a consistent run with everyone from Bernard Kerr in 12th downwards dropping out of the top 20 in one or more sectors (the darker the colour the better the placing, the lightest colour is anything outside top 20).

Another way to look at this is to make the same heatmap but show the top 20 at Split 1 – see how much light colour there is as riders struggled to stay consistent the whole way down the track.

So, after a loooong wait for the season to start then two World Cups back to back we’ve got six weeks to wait until the next one (who schedules these things?!). I’m off to do a little mid-season testing and R&D work and hopefully come back strong for the middle of the season. See you in six weeks!

Gee was second in sector 2 to Minnaar by 0.021, and crushed the field otherwise. Two down…

that was an exciting finish, down to the wire