Look At The Stats! Pietermaritzburg Analysis

So Greg Minnaar held his nerve, soaked up the pressure and rode a standard 26inch wheel, 10 inch travel downhill bike to victory to take the hometown win in front what must have been the most expectant crowd since Wills and Kate presented little George to the world for the first time. So how did Greg cope with the pressure and more importantly, where did his rivals crack?

Probably the most technically testing part of the course and that dusty first corner claimed a few high profile scalps but Greg Minnaar was setting the pace right from the start, over a second ahead of the rest of the field. Mick Hannah, Gee Atherton and Nick Beer were the only riders to get within two seconds of Minnaar at Split 1.

Whilst Jared Graves won a lot of respect for turning up on his trail bike and taking a podium place, I can’t help but wonder what might have been if he was riding something a little bigger in this top section. Whilst he made up time elsewhere he was well off the pace at split 1 over five seconds back in 24th place. Everyone was talking about being quick on the pedal but did this distract from the parts of the course did pose a technical challenge I wonder? 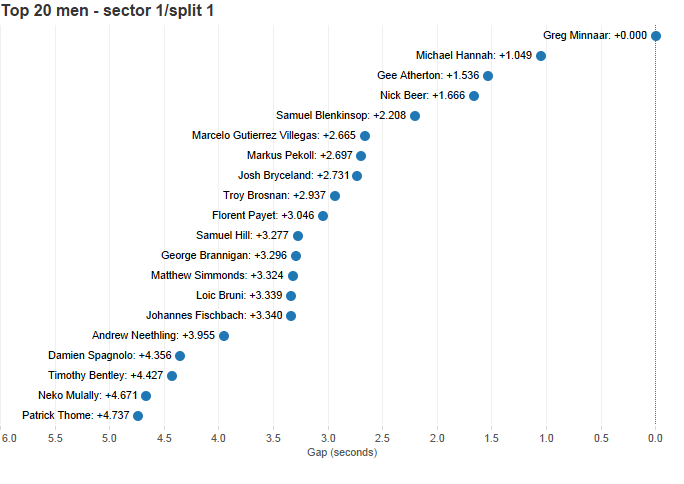 The fabled flat pedalling section of doom! Well, the usual suspects turned up here. Jared Graves made the most of his supreme fitness and trail bike to go fastest in Sector 2 but Mick Hannah was only just over a tenth of a second back on his downhill bike (admittedly optimised for the track by the sound of it, but a downhill bike nonetheless). These two put over two seconds into the rest of the field and Hannah wiped out Minnaar’s Sector 1 advantage to take a lead of nearly 0.9 seconds going into the final sector.

There were two surprise package in sector 2 was Matt Simmonds who showed he’s been putting in the fitness work with the fourth fastest time here, less than 0.4 seconds behind Minnaar. Finally though, mention has to go to Wyn Masters – not one I’d have noted down as a big pedaller but he managed 12th place here, recovering from 35th in Sector 1 to sneak into the top 20 at split 2. 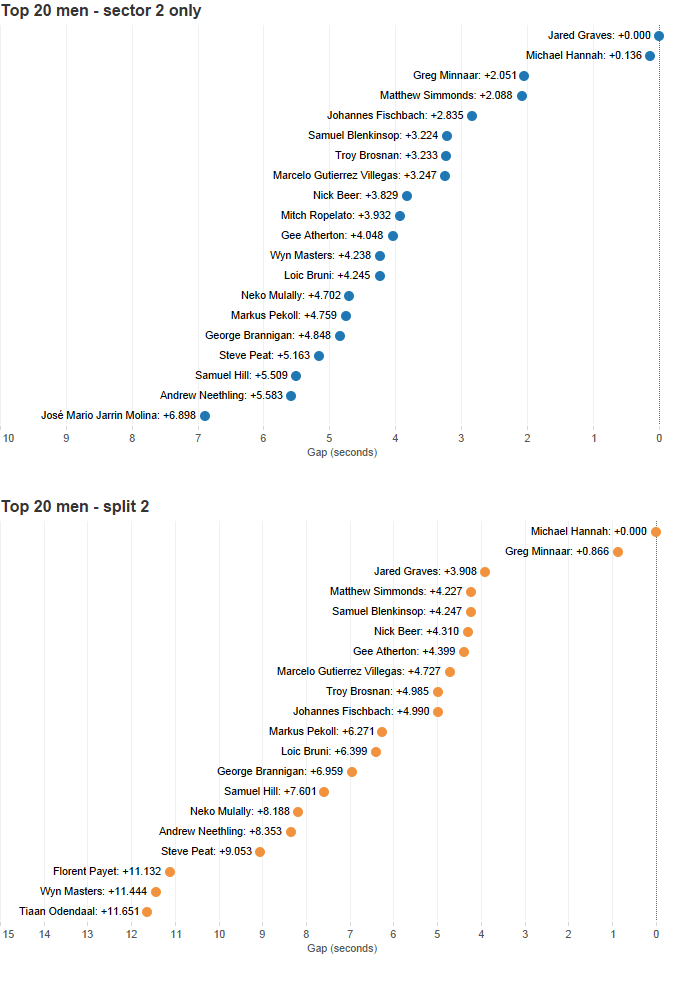 The final sector was only 40 seconds long but it played a big part in deciding World Champion this year. Hannah had nearly 0.9 seconds on Minnaar but he maybe left a little too much in Sector 2 and paid for it in the final sector. Whilst Minnaar went fastest, Hannah lost 1.2 seconds and with it the rainbow stripes. Jared Graves continued his charge, going second fastest on the sector, 0.3 seconds back but he simply left himself too much to do after sector 1 to go higher than third place.

Sam Blenkinsop showed he is in the condition of his life at the moment and whilst Matt Simmonds did enough to hold on to a podium position, Blenkinsop made up enough time to sneak up from 5th to 4th place. 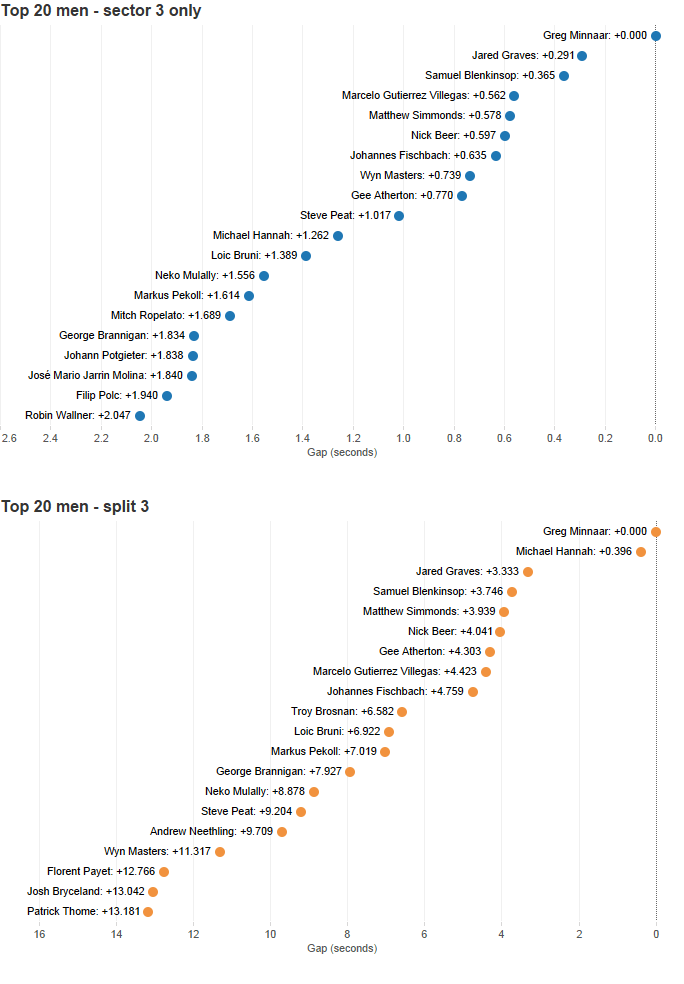 Where it was won and lost

If you were to sum up Greg Minnaar’s career in a word it would have to be consistency. Incredibly, his third World Championship jersey was his 70th World Cup & World Championship podium appearance and he did it by remaining in the mix all the way down the hill. He set the pace whilst Jared Graves was struggling up top, he stayed in touch when the big guys put the horsepower down in the middle section, then took advantage of a tiring Mick Hannah to take the win in sector 3. The heatmap shows this up – 1st, 3rd and 1st whilst Graves has a bight light patch in sector 1 and Hannah in sector 3.

And so the circus moves on to Hafjell and Leogang. I suspect there will be less chatter about wheel sizes and bike choice at the remaining rounds but for all the moaning about the track and the bikes, it’s been a fascinating race with the questions over wheel size buried, albeit temporarily I’m sure, in the red South African dust of the first corner of this course.

Will Minnaar’s win on a traditional downhill bike settle the wheel size debate once and for all, or will the hype continue on for the foreseeable future?

[Forum] Is Strava having trouble making ends meet during COVID?

All lycra-elastane based tight-fitting clo
thing is not permitted.
4.3.012 A full-face helmet must be worn properly b
oth when racing and when training on the
course. The helmet must be fitted with a visor. Ope
n-face helmets may not be worn

I wonder how tight is tight? Has any rider tried to push that with less baggy or more slim clothes? I think it makes total sense to ban tight clothing that offers no crash protection. Makes it equal for all. If the riders follow that spirit too and not try and use some "cheater" outfits that is good too. In skiing they have plumbed suits that have a button permanently to the suit to indicate that it meats the standards. They you hear of the Tina Maze who allegedly wore some kind of impermeable underwear underneath her suit for extra speed. That gets stupid.

What are the top speeds these guys are getting to? I am surprised that with gaps this close that riders aren't wearing more aero clothing. Big shorts that scoop air and act as a parachute must cost a fair bit of time. I ski racing a suit is huge. Even in GS which sees 60 to 70 kph its worth a few seconds in a minute and half run. Some guys are racing in full pants which makes sense to me. I am not suggesting lycra skin suits but closer fitting jerseys and pants would be an advantage I would think.

I think it was around 50mph

there is a rule preventing tight clothes…