Look at the Stats! Leogang Analysis

Look At The Stats is Mark Shilton’s nerdy project, merging his interests of following mountain bike downhill and playing with data. It’s a really interesting way to look at World Cup stats and we’re happy to bring you Mark’s last effort of the 2013 season…

After six rounds of racing across four months and two continents it came down to 2.858 seconds. That was the gap between Atherton and Smith at the finish line that gave Smith the win and the overall title. So where did Smith find the speed that gave him those precious 200 points? Let’s have a look shall we?

The splits on the Leogang course were a bit weird. Out of a three and a half minute course, the first split wasn’t until 2min20s leaving only about 30 seconds each for splits 2 & 3. With nearly 70% of the race done by split 1 then, it was important to be right up there by this first split to have any chance of a good result. At this point Steve Smith had already set the pace with the fastest time over 1.5 seconds faster than anyone else. In fact, only three riders managed to get within 3 seconds of Smith by Split 1! Atherton gave himself a chance by being one of those but he still had a 1.7 second gap to make up with only a minute of racing to go.

Mick Hannah backed up his good qualifying result with the second fastest split 1 and Loic Bruni also started well. Steve Peat continued his good run of late season form as he slotted into 6th at Split 1. 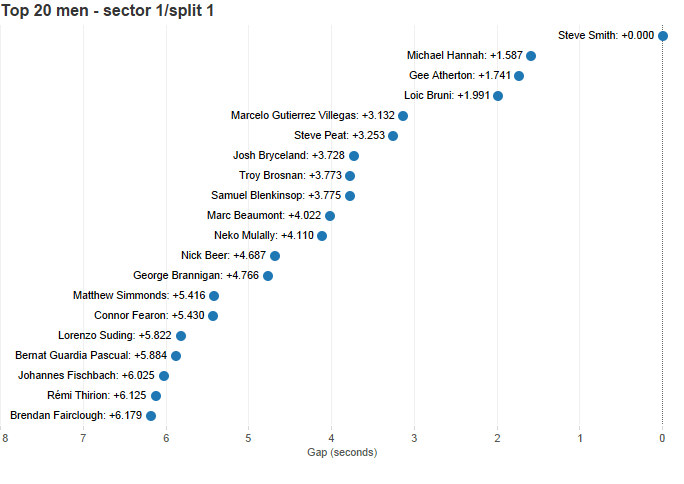 Split 1 was 2m20 into the track, leaving only a minute of racing for anyone to make up time…

Having said that the last two sectors were short, there was still plenty of shuffling of positions as riders took the risks to try to secure that last good result of the season. This was where Loic Bruni made his play for the win with the fastest time in Sector 2. Steve Smith was less than two-tenths of a second back in second though and more importantly, Atherton had given away almost a second to Bruni, which gave Smith an even bigger cushion of 2.5 seconds here. Josh Bryceland also started his move up the leaderboard in Sector 2, scoring third on the sector and moving up to 5th overall.

Whilst these guys were moving up, a few others dropped back. Steve Peat could only manage 37th fastest in Sector 2, 2.2 secs back, and dropped back to 9th overall. Mick Hannah also lost out here – giving away over a second to Smith with the 11th fastest time in Sector 2 dropping him back to 4th overall at split 2. 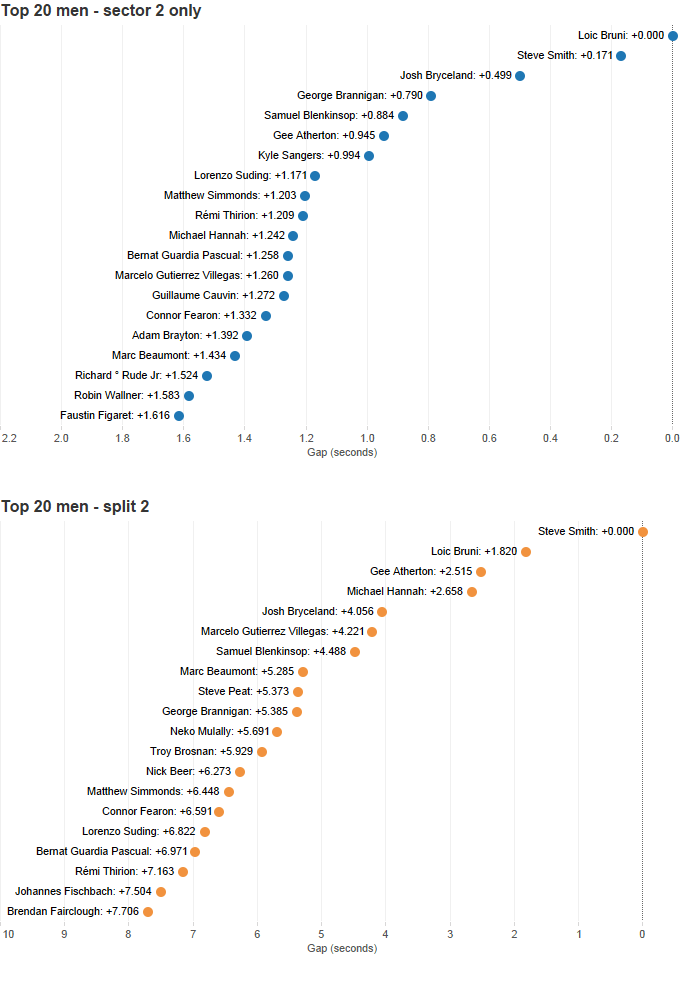 Sector 2 was short but a lot of racers lost time in the wooded technical bits.

Coming into the final open section of the course all Smith had to do was stay upright and guide it home. This he did with a steady but still competitive 6th fastest sector 3 but most importantly, he still managed to go 0.25 seconds faster than Atherton here to seal the first ever Canadian victory in the overall World Cup series. At the top end, Mick Hannah managed to overhaul Atherton overall with the fastest Sector 3 but Josh Bryceland was less than a tenth of a second behind in second. Loic Bruni sealed his best ever World Cup result with a third-fastest sector 3 and maintaining second overall. Sam Blenkinsop and Troy Brosnan also put in strong times here which helped Blenkinsop secure 7th place overall and Brosnan to jump from 12th at split 2 to 8th at the finish. 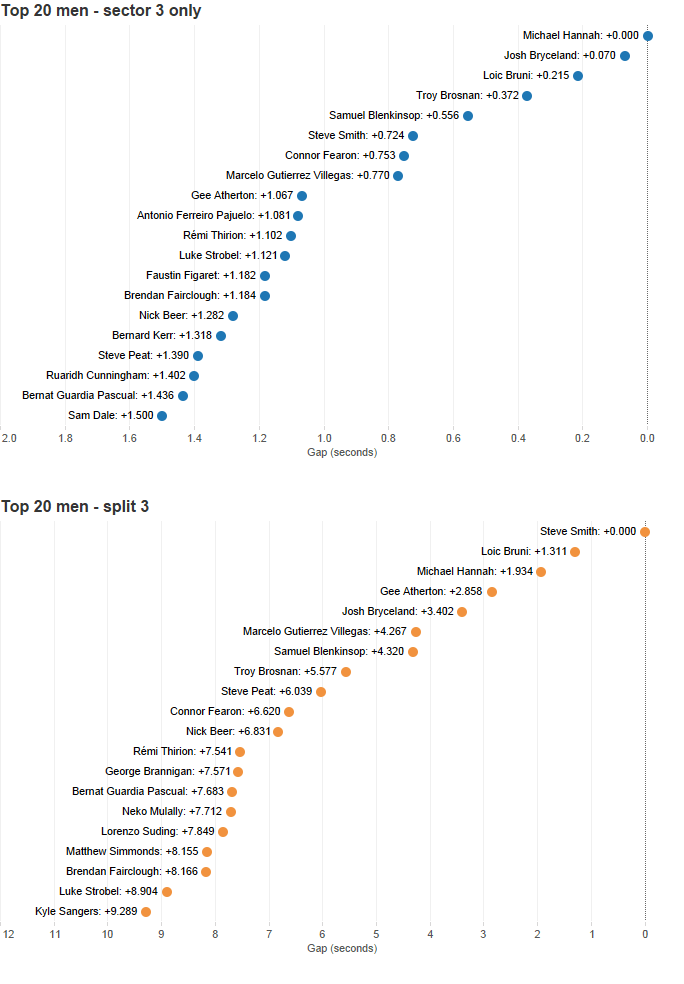 The top three riders on sector 3 ended up in the top 5 overall, while Smith cruised home for victory.

Where it was won and lost

Just like last week in Hafjell, Steve Smith’s recipe for success was simple. Set a blistering pace at the top of the course and then consolidate lower down. Looking at the heatmap, Atherton was just about hanging on to Smith’s pace at the first split with third place, but just couldn’t quite match it in Sectors 2 & 3. He was 6th to Smith’s 3nd in Sector 2, and 9th to Smith’s 6th in Sector 3. Loic Bruni was the other consistent rider with 4th, 1st and 3rd in the three sectors whilst Mick Hannah’s power in the final sector kept him on the podium after a relatively lowly 11th fastest Sector 2. The other big hole in the heatmap that stands out is Troy Brosnan’s middle sector. He was 8th at split one and had the 4th fastest Sector 3 but a mistake put him back to 38th in Sector 2. He lost about 2 seconds in this sector which was pretty much the difference between 8th and replacing Josh Bryceland on 5th step of the podium. Such are the fine margins at the sharp end of World Cup racing… 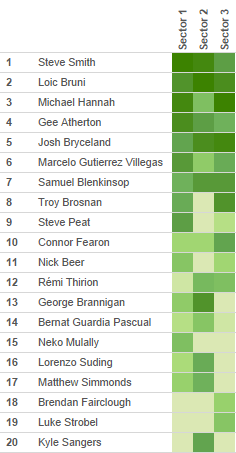 So the season draws to an exciting close. If there’s one thing that seems to be a constant in World Cup racing, and professional sport more widely I guess, it is the word momentum. Aaron Gwin picked up his first World Cup win in Pietermaritzburg in 2011 and proceeded to go on an unprecedented winning streak until his momentum was curbed by a couple of crashes and injuries in the middle to end of last season. Atherton seemed to have lost his momentum with a seemingly endless run of podiums without a win stretching back to Windham in 2010, but victory in the first round of 2013 at Fort William gave him that confidence, that momentum, to go on and take another at Val Di Sole. Throughout the early part of the season though, Smith was building some momentum of his own with 3rd, 2nd and 4th at the first World Cups. Once he got a win under his belt though, he got on a roll that not even Atherton could keep up with.

Having such a tight contest this year already has me excited for April next year and the first round in Pietermaritzburg. The tricky part, as we’ve seen so many times, is carrying momentum from one season to the next. Gwin seemed to have that figured out in 2011/12 but that seems a long time ago now. Can Smith carry this momentum into 2014 or are there others waiting in the wings to go on a similar run of form next year? This uncertainly is one of the the reasons DH racing is so exciting and why I love watching the racing and picking it apart. Congratulations to Steve Smith, commiserations to Gee Atherton and I’ll see you on 2014!

We’re just as excited as Mark for next year’s World Cup – who knows who will go fastest?

I believe since Gee hit that tree in the Norway round and lost by 8 seconds that fastest time overall would probably be Stevie..

During the last part of the season, Smith's wins had become almost automatic, like Gwin's had the year before.

It might be really interesting to add all of the races together? See who actually has the fastest time overall!

First stats I actually looked at. Quite a nice breakdown. I should have checked them out sooner.