Look At The Stats! Hafjell Analysis

Steve Smith defends his Hafjell crown and takes his second wet race win of the season. Looks like growing up in the rainy Pacific Northwest might have come in quite handy… With Gee Atherton’s unplanned tree hug, the stage is now set for an exciting finale in Leogang next week, but where did Smith find the pace to take his second win of the season?

Smith set the pace from the off with the fastest first sector and only Atherton and Neethling could stay within a second at the first split. Loic Bruni and Bernard Kerr were the other fast starters to round out the top 5 at split 1. 4th place finisher Sam Blenkinsop didn’t do it the easy way, he was only 14th fastest by this point, over 2.5 seconds back, whilst Danny Hart and Greg Minnaar also gave away about 1.8 seconds to Smith by the first split. Steve Peat had his best result for a while here but he also started relatively slowly in 15th at split 1. 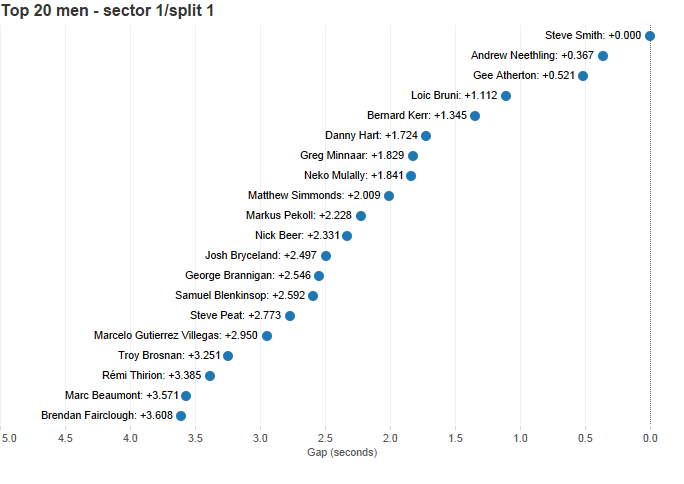 Sector 2 was where Smith sealed victory through his own speed and other’s mistakes. Gee hit a tree in the woods, Bruni went down in the open and Neethling was almost 2 seconds back. At the same time, a few others made their dashes for the podium. Danny Hart was only 0.2 seconds back and Steve Peat took the 3rd fastest time in Sector 2, only half a second behind Smith. This pushed the two Brits up to second and fourth place overall at Split 2. Bernard Kerr was also still running well here with the 7th fastest Sector 2, holding on to 6th place overall, but only 4 hundredths of a second behind Greg Minnaar. 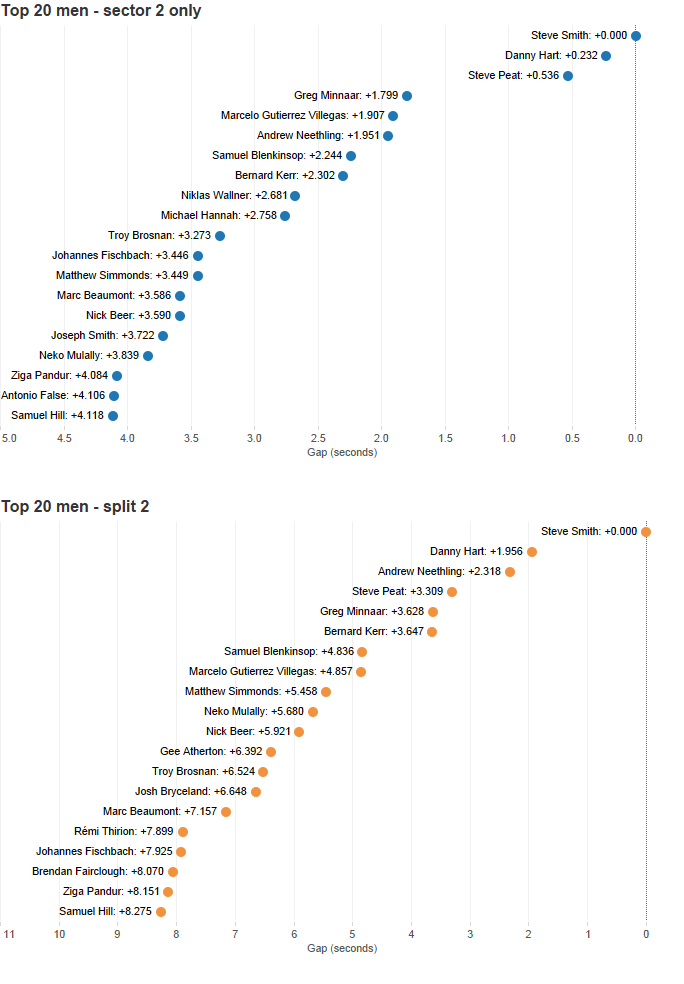 Sector 3 was where Sam Blenkinsop managed to jump from 7th place at split 2 to a podium position with the the fastest lower section – just about holding a monster slide on the grassy turns to take 4th place overall. Danny Hart couldn’t really hope to haul back nearly two seconds on Steve Smith in the final sector but he was second fastest to confirm a second placed finish.

On the other hand, Steve Smith just had to get down in touch with the fastest times here and he did just that. He gave away nearly a second to Blenkinsop but still took third in Sector 3 to confirm the win. Bernard Kerr had a poor final sector – only 25th fastest – which dropped him back to 9th overall but still a really solid result for the Brit. In fact, there were four GB riders in the top 10 and seven in the top 20. Not a bad weekend all round for GB what with a 1-2 in the Junior Men and the Women, and Brits leading the overall in all four categories (Senior/Junior, Men/Women) too! 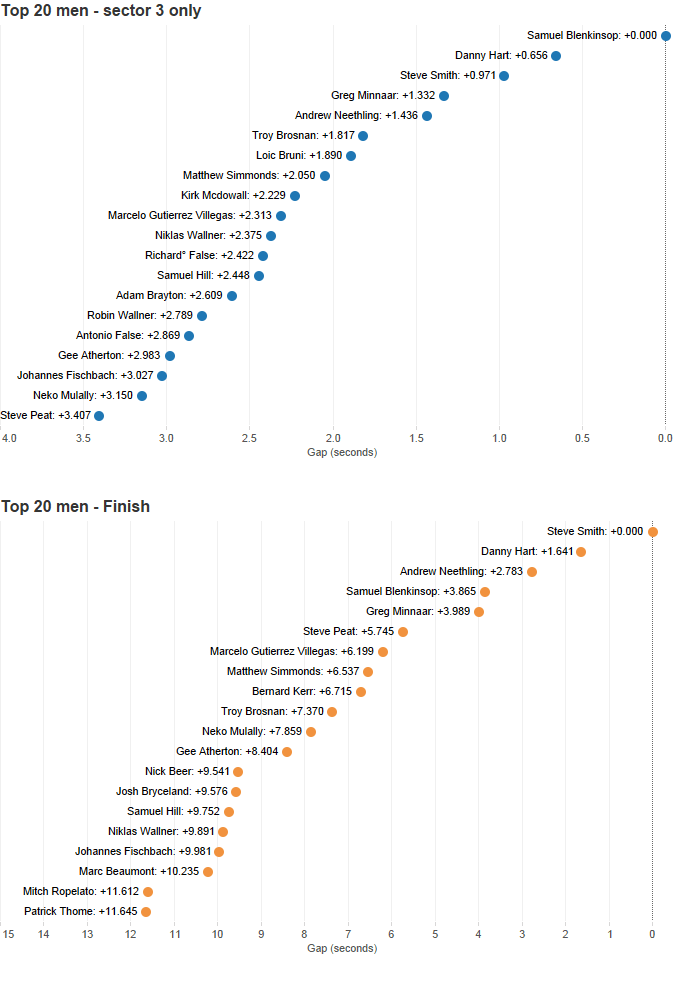 So Smith won it with a solid performance all round, as others around him crashed and slid out, to set up a potentially thrilling finale in Leogang next week. Of the rest, only Hart, Neethling and Minnaar managed to stay in the top 10 in all three sectors but perhaps the oddest sector positions were Steve Peat’s. He managed 6th place overall with 15th in Sector 1, 3rd in Sector 2 and 20th in Sector 3! It certainly seems that wet races often offer the chance to make up for a bad sector with a good one elsewhere as people around you make mistakes.

Going into Leogang there’s only 17 points separating Gee Atherton and Steve Smith which means that with 50 points for top qualification spot even seeding points are crucial. All eyes on both runs next weekend then… I’ll be glued to the live coverage and I’m sure if you’re geeky enough to have read this far you’ll be too!

Clear your schedules folks, as it all comes down to this. Will the Chainsaw Massacre carry the day, or will Atherton reign supreme? Only time will tell…

Woulda thought that Sam Hill would be higher. At least he's crushing Gwin.

Thanks for these Mark, they're always awesome.