Hi there. Like the riders at the Fort this weekend I’ve been chomping at the bit to get started on a new season. I’ve been hard at work training all winter to make sure I fly out of the start hut and hit all my lines at full race pace. After that ridiculous intro I think I’ve successfully taken the shine off the new season and we can just get on with the stats hey? Gee Atherton finally broke his drought of almost three years, 17 World Cup/World Champs races and 14 podiums without a win. Let’s find out where he found the 1.142 seconds that he had found so elusive since Windham 2010.

After a minute of racing Gee Atherton had set a blistering pace. Danny Hart and Mick Hannah were snapping at his heels but only Hart, Hannah, Smith and Hill were within a second. Compare this to the rest of the top 20 with 6th to 20th covered by less than 0.9 seconds. Brook Macdonald had a distinctly average start to the race – 1.8 seconds down in 13th place.

A few other notable mentions at this point – unsponsored Harry Heath had a storming qualifying run and at Split 1 he was looking good in 12th place. Sadly a crash in the middle section ended his hopes but not a bad place to advertise your services to prospective sponsors! Jared Graves also had a solid start on a track you’d expect him to do well on with 9th at the first split. Finally, a name I’ve not come across before is New Zealand’s Edward Masters who was tucked in just behind Brook Macdonald in 14th place. He dropped back to 41st overall with 45th place in the next two sectors but was also 10th fastest through the speed trap. One to look out for? 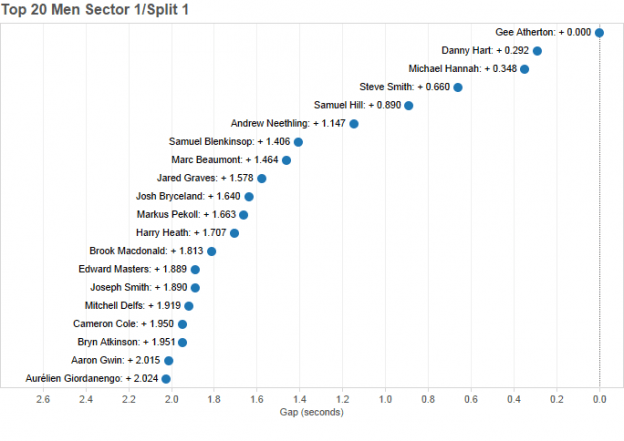 The bulk of the track was in Sector 2. Just over 3 minutes of racing that included about half of the high speed upper open section and into the woods. Brendan Fairclough remarked last year that this race couldn’t be won in the woods but it could very easily be lost. It’s fair to say that this year there were winners and losers in the middle section.

The southern hemisphere riders seemed to make the biggest moves up and down the rankings in Sector 2. The big winner here was Brook Macdonald. After a slightly lacklustre start he posted the fastest time in Sector 2, clawed back nearly 0.7 seconds on Gee Atherton and jumped up to 3rd overall at Split 2. Sam Blenkinsop started his charge for the podium here, making up 0.8 seconds on Danny Hart and Steve Smith with the fourth fastest Sector 2, whilst Sam Hill also made up nearly half a second on Atherton in the middle section and jumped up to 2nd overall.

The final big gainer was Greg Minnaar. He was only 21st at the first split, over 2 seconds back but managed to take 7th fastest on the longest sector on the course. Given his pedalling power he was at least well set to try and salvage something from such a poor start on the final Motorway section.

The biggest losers? Mick Hannah dropped to 9th overall after setting only the 10th fastest Sector 2, 3.6 seconds off Brook Macdonald. After an encouraging start Jared Graves must have had problems here. He could only make 48th on the sector and even with the 10th fastest sprint to the line in Sector 3 he could only manage 37th overall.

Within all of this though, Gee Atherton was still marching on, 3rd fastest and extending his lead over all but Macdonald and Hill. The race for the podium was pretty clearly being fought between six riders with a sizable 1.5 second gap back to Greg Minnaar in 7th. Surely no one else could break onto the podium in the final section surely?…. 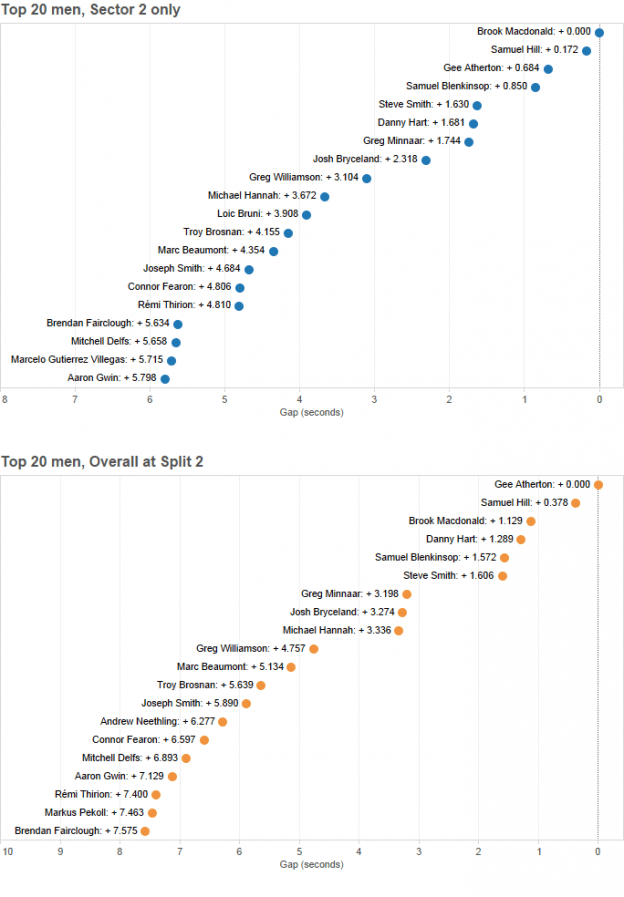 The shortest section of the course at only just over 35 seconds but such an important part of the race at Fort William and this year was no different. This defintely gave an insight into who had been putting in the interval training over the winter and it appears Mick Hannah has been hitting it pretty hard in the off season. Whilst the rest of the top 20 on Sector 3 were covered by 1.5 seconds, Mick Hannah went 1.1 seconds faster than anyone else! This shot him up from 9th at Split 2 to the final podium spot.

Gee Atherton was again right up there, only giving away a tenth of a second to Steve Smith and Sam Blenkinsop (another one who’s been doing some sprint training over the winter?) and on virtually the same time as Brook Macdonald. Sam Hill and Danny Hart were the biggest losers here. Sam Hill has never been a noted pedaller so 35th on Sector 3 might not be so unexpected but this still dropped him off the podium. Hart was more of a surprise after he was well in touch on the Motorway last year on his way to second place. This year though he looked noticeably ragged and this translated into only 21st fastest, dropping him down from 4th at Split 2 to 7th at the finish.

A few other unexpected names popped up in the Sector 3 times. I remember picking out Richie Rude Jr. as a stand out on the pedal section at Pietermaritzburg last year and he popped up again here as 8th fastest. Sam Dale went even faster, in 6th place, only half a second off the podium group. Finally another name I’ve not seen before – Kyle Sangers. The Canadian was 56th overall but managed 11th on the Motorway and 9th at the speed trap. Another one to watch for Pietermaritzburg?! 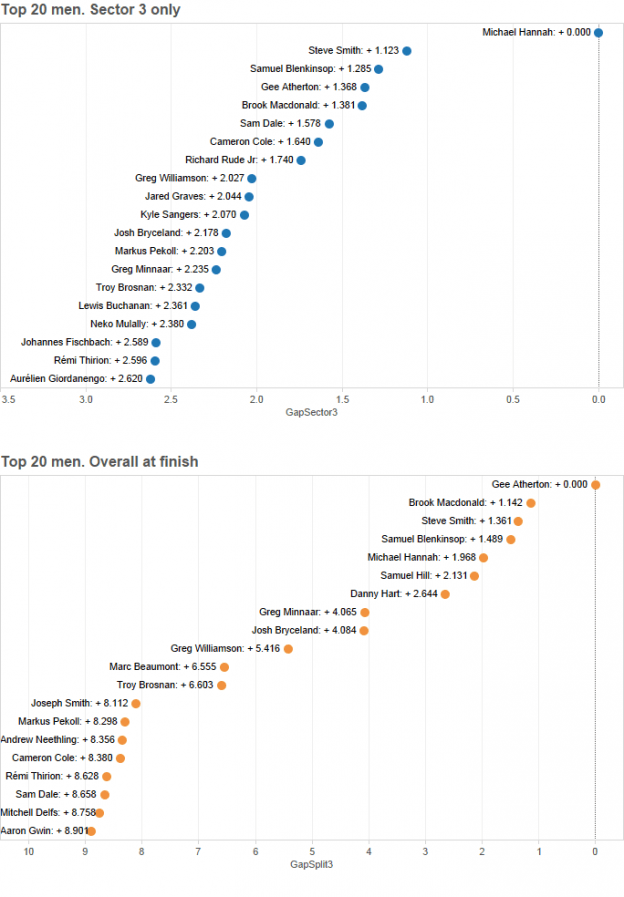 Where the race was won…

The heatmap shows Atherton’s consistency (dark colour = better position, lightest colour = outside top 20). Everyone in the top 10 either has one big hole in the heatmap where they lost time or, in the case of Greg Minnaar and Josh Bryceland, lighter across the whole row so consistently slightly off the top pace. Atherton’s dark bar at the top really stands out and highlights his consistency down the whole course.

Ultimately Gee Atherton won it up top. He grabbed a lead over Hart, Hannah, Smith and Hill and then either stayed in touch or took time off them in Sectors 2 and 3. Brook Macdonald must be disappointed with his top section. He lost 1.8 seconds there, clawed back 0.7 secs on Sector 2 but he was never going to be able to make up another 1.1 seconds over Gee on the Motorway.

Finally, what of Aaron Gwin? Seemingly out of sorts all weekend and sector placings of 19th, 20th and a disappointing 36th in Sector 3. Illness? Injury? One thing’s for sure, next week the World Cup moves to a track where he smashed the field by over 7 seconds last year. No doubt Martin Whitely will have cracked a wry smile as Gwin’s replacement at Trek World Racing stepped onto the podium at Fort William but let’s not write him off just yet…

Mark’s data analysis is rad. What do you see in there?

Hannah is a mad man

It seems a shame that there aren't more splits - If I was a team manager (or a rider) I would be interested in seeing where my riders (or I) were charging/falling behind with a bit more granularity. 3 minutes is a long time between splits.

neat stats. it was mentioned after the race that hill snagged his derailleur cable and was unable to get into his top gears - explaining a good chunk of time loss through sector 3.

Certainly something wrong with Gwin. Just slow in all sectors. It can't be that 19 riders suddenly got better than him over a winter.

"look at the nerds!"

so the top is fast and rough, middle is techy, and bottom is pedally - is that about right? I'm thinking the top section 2 guys will do well at Val Di Sole. Hopefully Steve Smith. And it'd be great to see Sam Hill up on the podium too.

The heat mapping is pretty cool… looking forward to this weekend.

gee wasn't the only consistent rider. smith's heatmap looks consistent across all 3 sectors, too. and look at #20: mr. gwin, consistently shite!