2012 was big year for MEC and mountain biking. This past year marked the launch of Ghost Bikes at MEC. It’s safe to say that many of us avid cyclists had never heard of Ghost Bikes before this announcement; however, Ghost Bikes are well established in over 30 countries and are just new to Canada. I first caught wind of the news when planning the Ultramontane series with MEC as a partner. As a result I had the opportunity to give Ghost’s shore shredder the Cagua a long term review. I spent the past 10 months aboard the Cagua, tasting dirt in all corners of our province. Touted as a “premium enduro”, this bike could be your ONE bike. 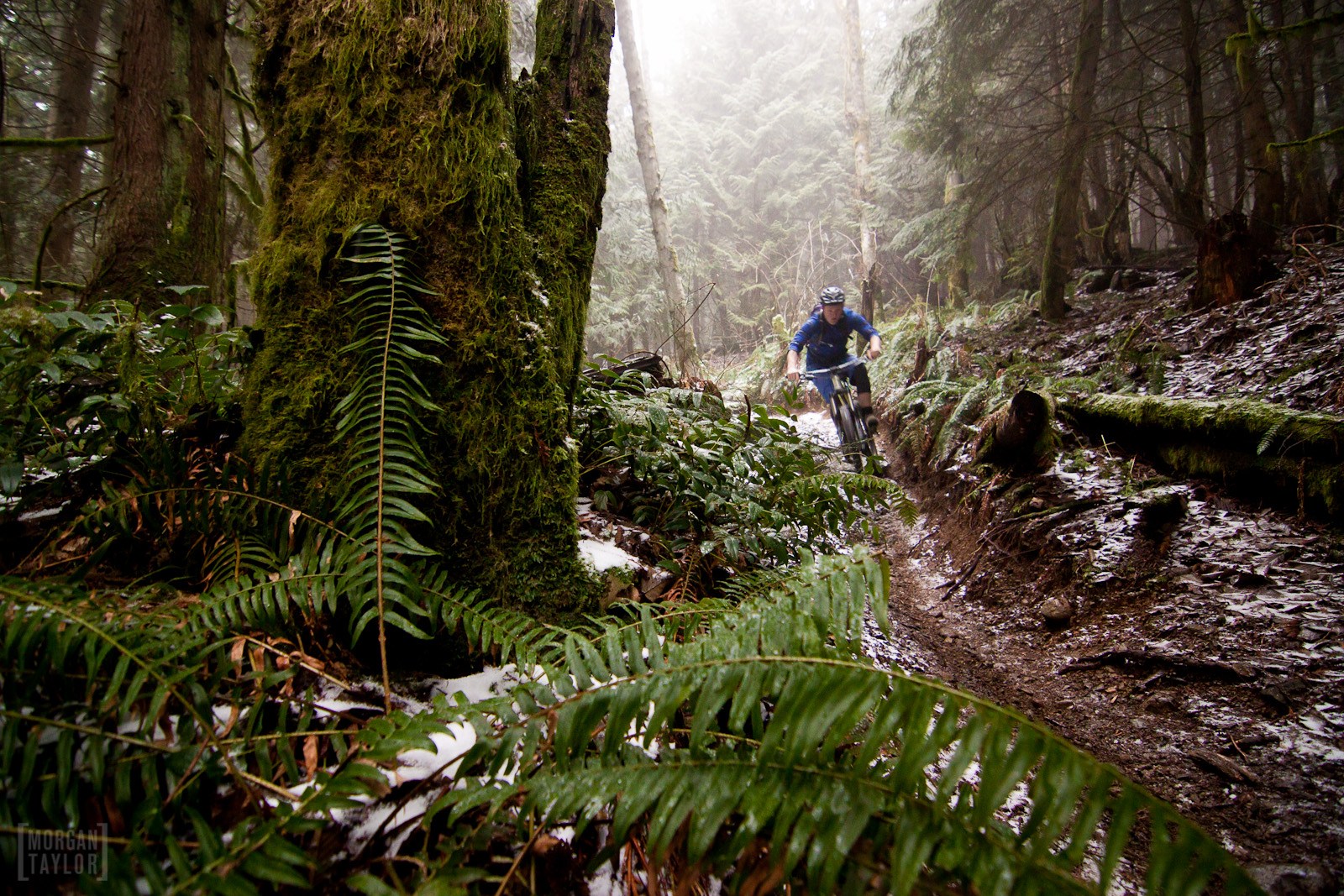 Mystery Downhill is an established proving ground for downhill bikes, and now for “Enduro”.

Lets start with the price. At under $4,000 the Cagua 170er claims to be enduro ready out of the box. I was skeptical but after only a few rides I could agree that this bike is truly ready to rip out of the box. Some of the highlights of the build include; a Rockshox Reverb dropper seat post, a special OEM 170/130mm Fox 36 Talas, Sram XO drivetrain and a full width Truvativ Boobar. Considering you can spend north of 6 grand on a similar spec’d bike, The Cagua is a great deal.

The Cagua may not be the most atheistically pleasing bike but simplicity and value can go a long way.

If you have read any of my previous reviews you’ll know that I like to push these test bikes until they break, literally. Fortunately the Cagua held strong over the 10 month period, and I never experienced the warranty process; however we all know MECs customer service is fantastic and would have you back up and running in no time.

With almost 7” of travel and a 66.5 head angle, the Cagua feels right at home on the North Shore.

Nailing geometry on today’s enduro machines is no easy task, seeing as they need to ride up as well as they go down, and that’s exactly what the Cagua did. I felt the dimensions were spot on for a size large; as a result, I always felt comfortable on long rides even with a heavy pack. It’s a good thing Ghost nailed it because they don’t offer any adjustability with the geometry or travel, something I would like to see offered in future models.

10 months ago I was regularly asked, “what kind of bike is that”, now I spot one or two on my rides.

What I really liked about the Cagua was its versatility as a package. It was just as comfortable shuttling with the big rigs on the Shore’s steepest as it was chasing Margus Riga around the Chilcotins with a camera bag. Less is definitely becoming more with todays mountain bikes and this is a great example. The Cagua felt lively and playful on the trails; yet managed the big hits wonderfully. The FSR style suspension is tried and true making it predictable and reliable. 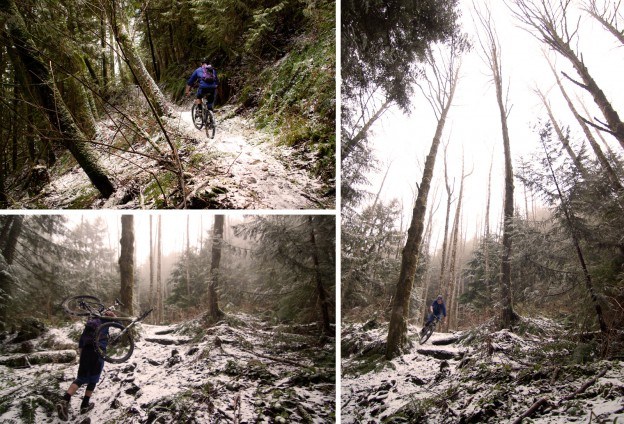 The Cagua was a wicked all mountain machine, but as an advanced level rider I was able to find some traits I wasn’t completely happy with. Weighing in at around 32 pounds the Cagua is probably one of the lightest aluminum 165mm travel bikes available, adding to its incredible value. However, being a lightweight comes at a price. The rear end, despite its 142mm Syntace axle, had noticeable flex; many times I could hear the tire rubbing the inside of the chainstay when cornering.

This flexing began to take a toll on the linkage and needle bearings and even after using loc-tite on the linkage hardware I would never leave a torx key behind on a ride. Like I said before I doubt most riders will even feel the flex I am talking about but for bigger, more aggressive riders this is definitely a weakness. I know many of the NSMB readers ride at an elite level and would appreciate what I mean – I don’t want this opinion to tarnish this review because the Cagua is a great bike for the majority of all mountain riders. 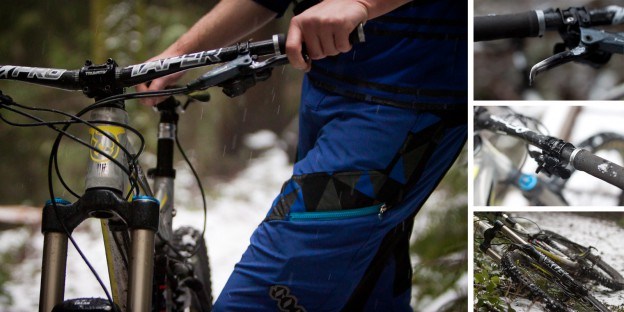 Thanks Zach @ Trident Sports for slapping on for my favorite bar – Answer Carbon Pro Taper 31”.

In the end I really enjoyed my time on the Cagua. It never let me down, act funny or piss me off; as a result, I would recommend it to many people. For those who are looking to start pedaling some more but refuse to give up downhill prowess, the Cagua is one hell of a package to get you going into the world of all mountain. For those who are already well versed in this world and looking to upgrade their current ride to something superior I suggest you pass on the Cagua. British Columbia is one hell of a testing ground for bicycles and if this is Ghost’s first year here in BC I think the future is promising.

The Cagua definitely looks like a good value – what do you think of the 170mm platform?

I would agree with a skinny rim, and a wide tire as being a possible cause for the rub. That is the one flaw with the spec on the Ghost trail and all mountain bikes. I think that with a 23mm, or even a 21mm internal width rim, tire rub wouldn't be an issue. Simple physics. Unfortunately aftermarket rims like that will eat up a big chunk of the savings. But then again, I don't think too many companies are offering wide rims as OEM.

That would be why I asked about the tire rub; is it a simple fix that only happens when maybe 1 out of 10 riders would ride hard enough to make it happen or is it a $4000 joke? Rocky Elements were infamous for the bottom pivots loosening but I fixed mine and it hasn't loosened since, if I could do it Ghost should be able to. Well, I build my own bikes so it's just a curiosity but it looked awesome in the store!

If a FS bike needs attention to the suspension linkages every ride you really can't give it a recommendation. Even if a less aggressive rider only has to maintain the linkages the bike once every 5 rides it's still a fail when there are lots of FS bikes you can ride hard without needing constant attention.

@stephen: Is a rider who has previously received support from a business 'unbiased'?

Given the quality of bikes out there that get the basics of bike manufacture correct i cannot fathom why anyone would buy this bike after reading this review unless they were blinded by the spec. I agree i am not the target market as per Connors article, but i cannot fathom why someone would buy a bike that needed a torx key in your pocket for every ride and that the tire rubs under cornering? Whether it's bad spec on the tire/rim, a flexy wheel, or a flexy frame it's simply the case that there are many bikes out there that have the basics like that covered.

That was definitely a poor choice of words on my part, so my apologies. It should have read "…see/read a review from a reputable rider who can point out both the positives and negatives". Although their was potential for him to have a biased view from past endorsement, it seems he's put that a side and put in an honest effort. I sometimes find that reviewers tend to leave out the things they didn't like about the bike, which Connor obviously chose to include.

That looks like really good value. Nice setup, and from the Ghost website it casts a nice profile. (Why no plan view here in this writeup?)
I couldn't help but think of the recent NSMB article "Is Freeride dead?" in looking at this bike - though it's sports a single crown fork, is this not the contemporary interpretation of a vintage Kona Stinky? 7″ front and rear, with appropriate angles? Hell, Ghost's DH bike is even called "North Shore". So is Ghost out of touch, or is freeride still alive?

The Ghost DH bike is actually the DH 9000 and DH 7000. They are still making a "freeride" bike, and that's what they're calling the North Shore. It has a few differences in angles, for example a steeper HA, and a shorter wheelbase than the DH 9000/7000.

Nice photos Morgan, I like the collage format! Good writing Connor, it's nice to see/read a review from an unbiased reputable rider.

Could the rear wheel have some flex to it or the triangle? It seems you've gone after the pivots, might even be the tire itself as it looks like a wide casing on a narrow rim and maybe not a lot of clearance, everything moves around a bit when pushed hard. It shouldn't rub but I'd like to know why it does.

Nice bike out of the box…looks like the updated spec on MEC has a 180/140 Talas and X-Fusion HLR Air shock… for $4000 that's pretty damn good spec.