A proctologist should probably check me for hidden horseshoes. After lucking into a personal ride with Nico Voullioz at Interbike, my luck is continuing. I recently got to pick up a fresh-out-of-the-box Spicy Team from Lapierre’s US HQ in Seattle. I’ll be getting intimate with this bike for the next month or so. 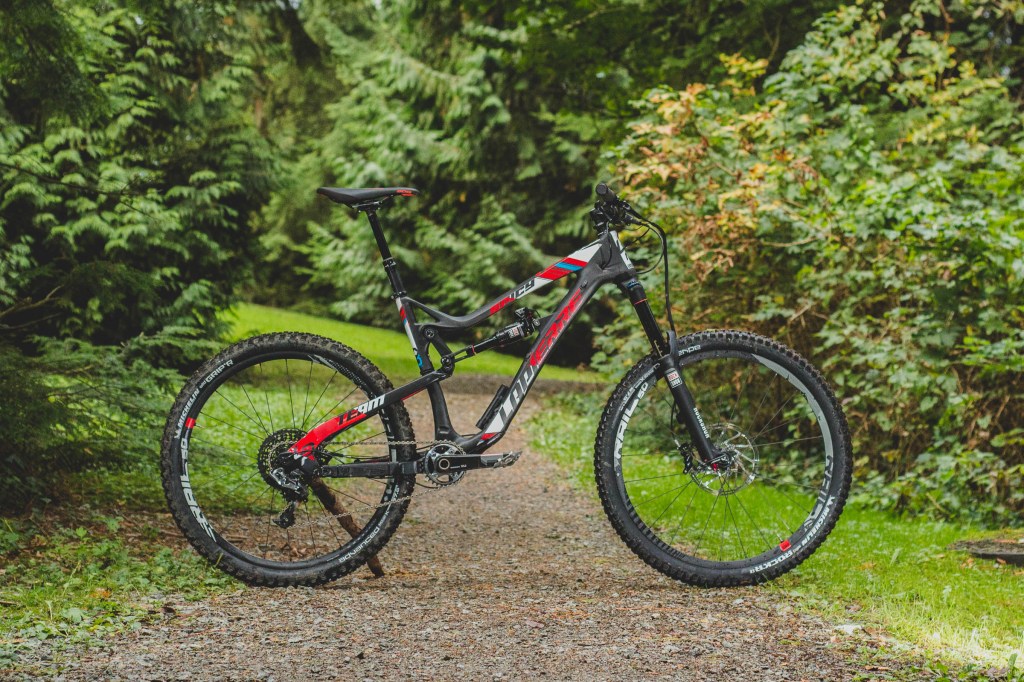 The 2015 Lapierre Spicy Team shares a frame with the Zesty bikes but runs with a longer travel fork and more burly build kit to turn it into a more aggressive machine.  This bike had literally just arrived at Lapierre along with Mike Hammond’s personal bike. Mike joined me in christening the bikes on a ride at his local spot, Tiger Mountain.

That little teaser of a ride at Bootleg Canyon had me intrigued. The bike felt good to ride up and down the dusty trails there and the E:I Shock Auto system’s control over the rear shock definitely had benefits, but I wanted to get the bike onto more challenging terrain. I needed to make the E:I shock brain work a bit harder. My ride review from Bootleg is a good spot to head for a better description of how the E:I shock works. 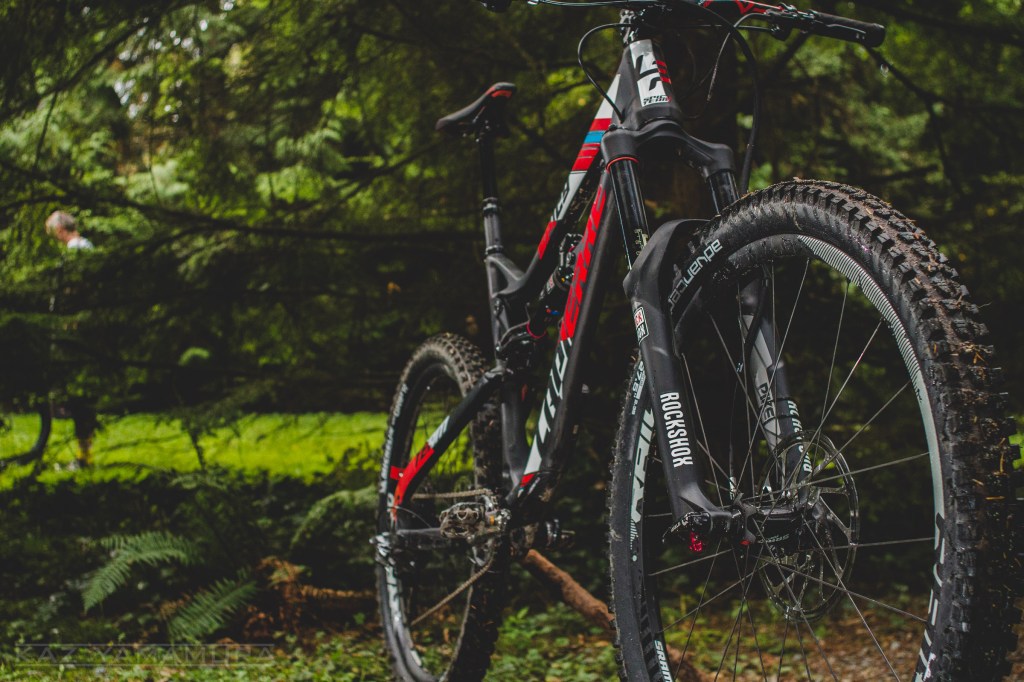 The Pike takes care of suspending the front of the bike and I was able to quickly tune the fork to my personal preference. Now that the fork has bedded in it is providing the plush but supportive performance that I expect from it. 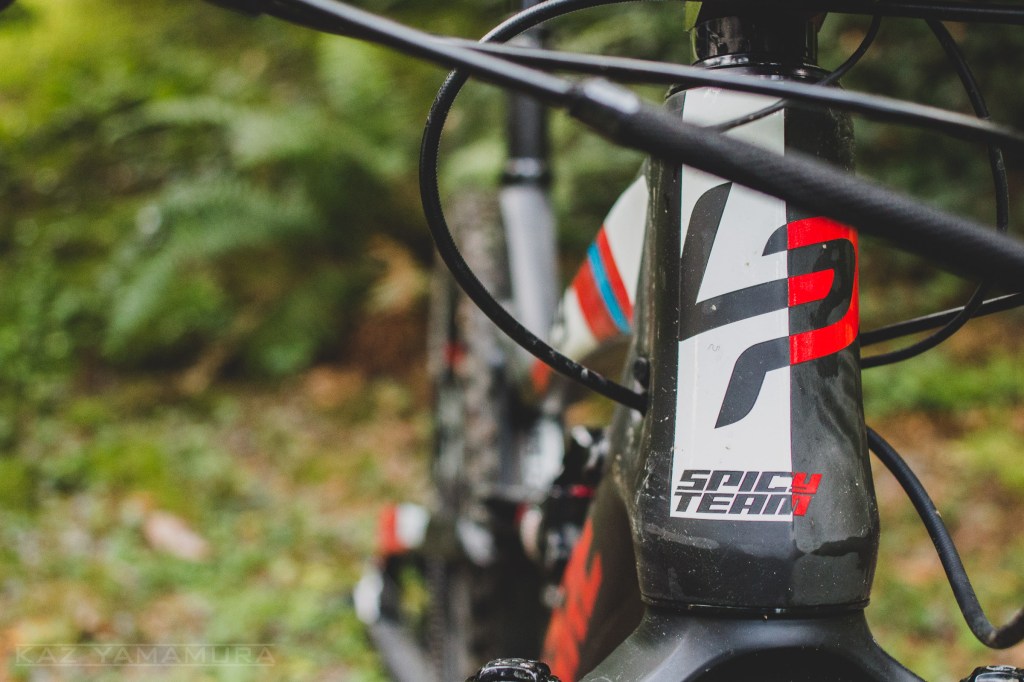 The Spicy Team has a carbon fiber front triangle with aluminum seat and chainstays. The 2014 Spicy Team has carbon seat stays but lots of riders complained that their profile was too wide and they clipped their heels when pedaling. The aluminum versions are a little slimmer and the gain of 4oz in weight is worth the extra clearance. 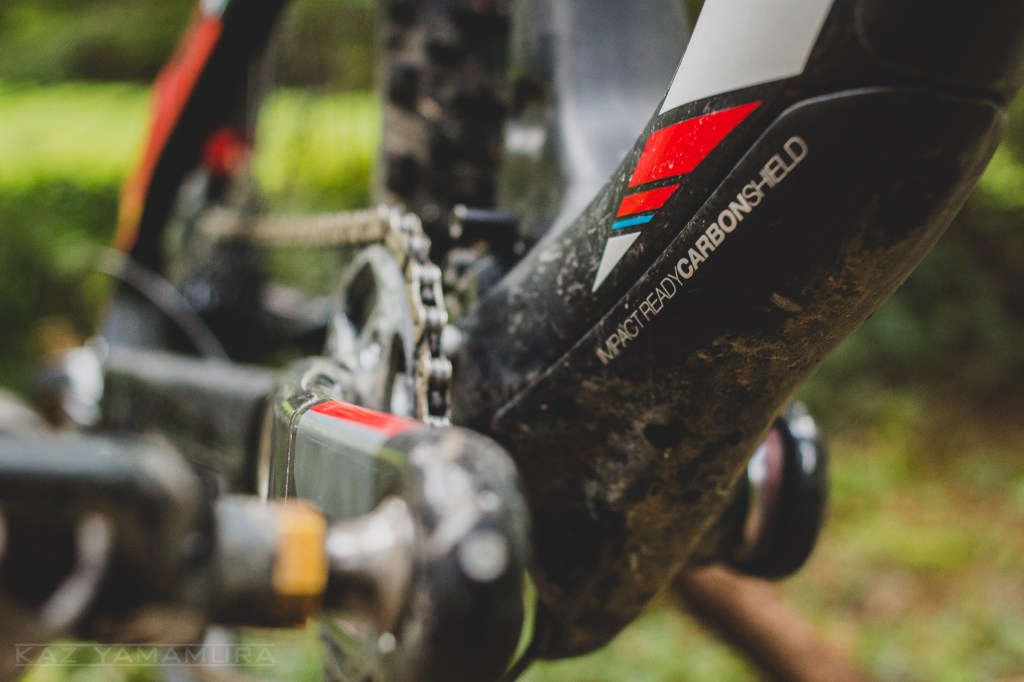 A sturdy shield protects the carbon on the downtube of the Spicy and also hides the ports where the internal cables exit the frame. 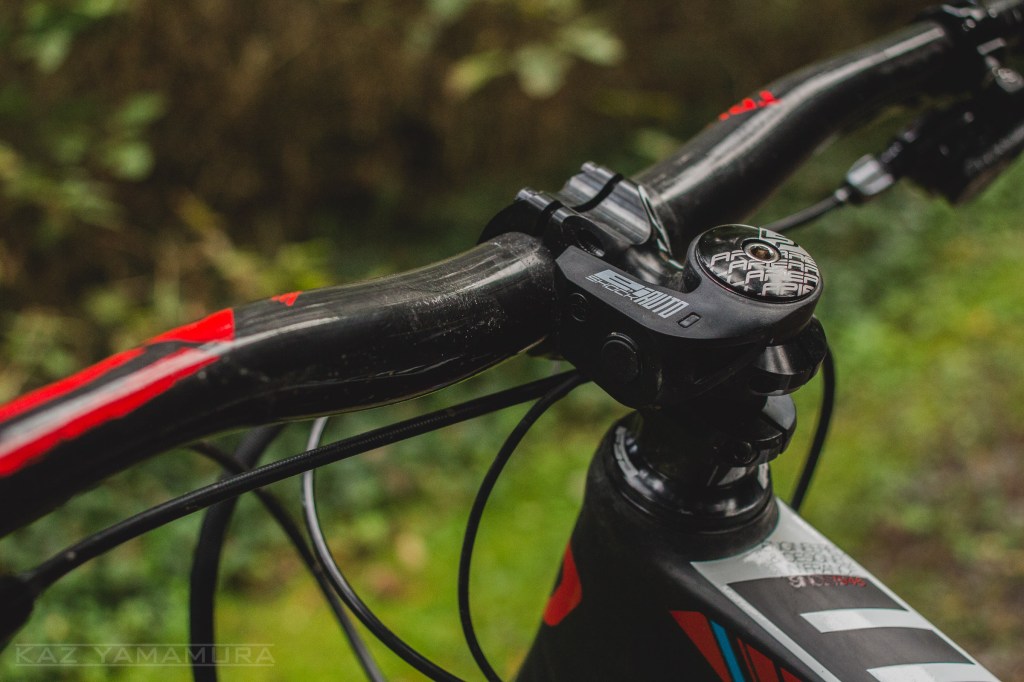 The brain for the E:I shock was repositioned to sit beside the stem based on customer feedback. The LED lights change from green (fully open) through orange (mid-platform) to red (full platform) as you ride. The full platform mode can be changed by pressing in the button on the side and selecting which level you’d like. So far I have been going between the lower two of the platform settings. 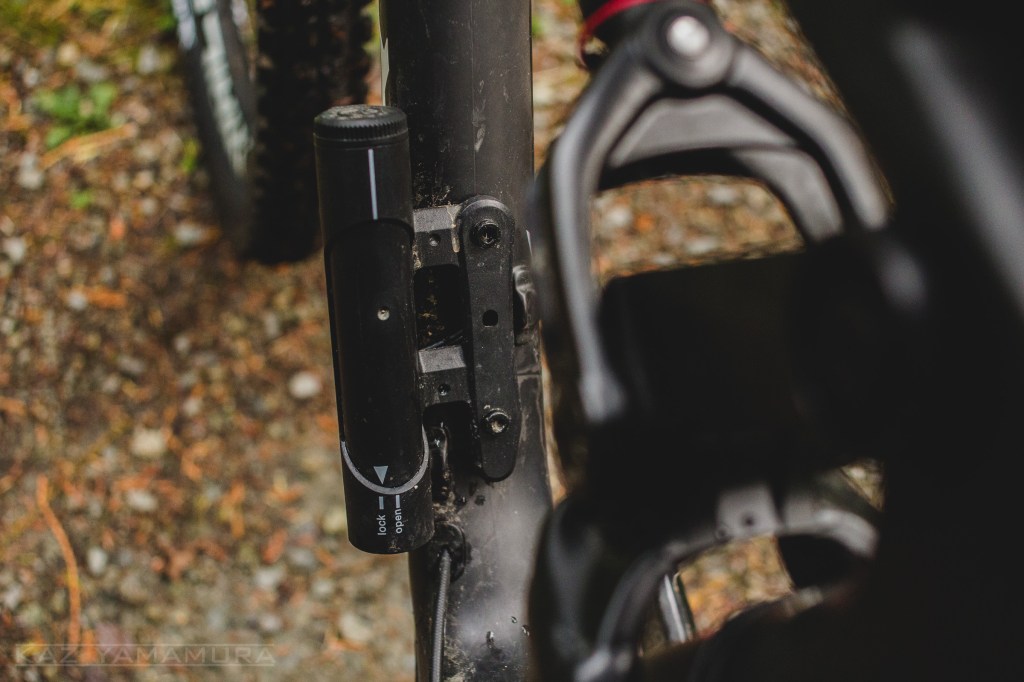 Another area where customer feedback has seen changes for 2015 is the battery. The new battery is smaller and is positioned off to the side of the bottle cage position, allowing a bottle cage to be fitted for those who like to Enduro. The battery is easily removed to connect to the included charger. 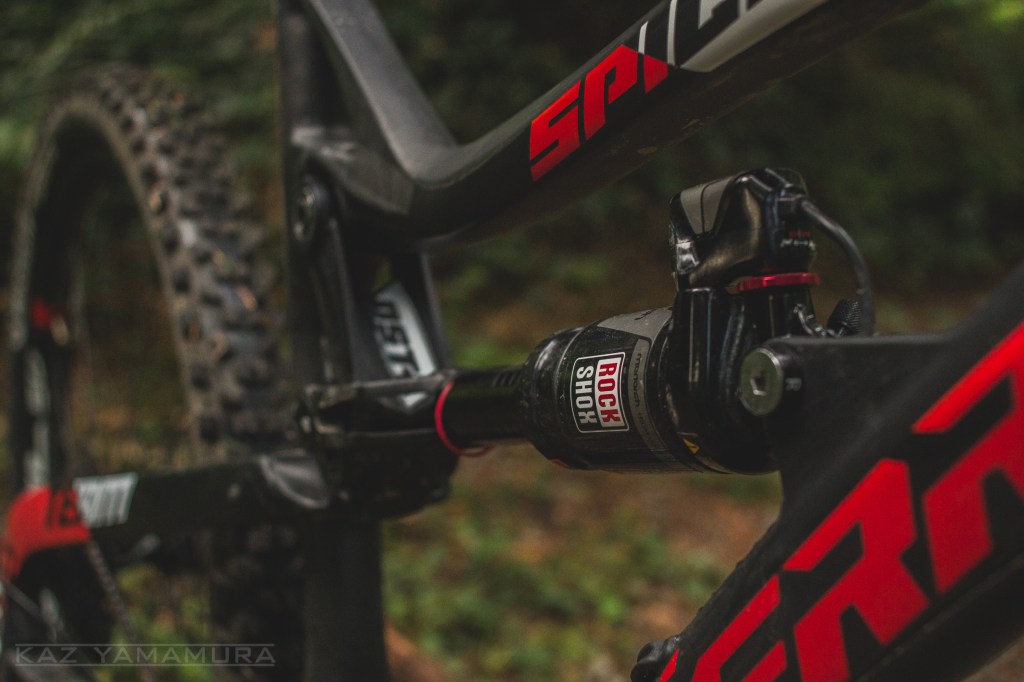 The Rock Shox Monarch rear shock has that very obvious actuator sat on top of it to change modes. The shock has been tweaked for 2015 with a spacer added to the air can to reduce the volume. This gives a more progressive rate to and better support in the mid-stroke. In action this is noticeable and makes the 150mm travel rear end feel lively and responsive but also bottomless on larger hits. 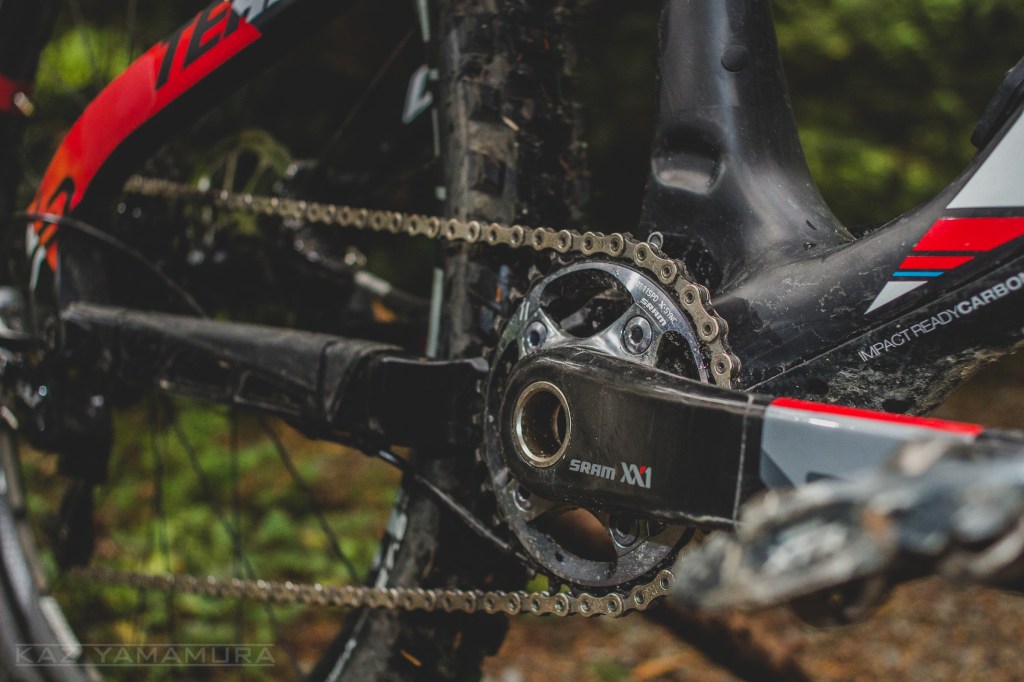 The Spicy Team is draped in all the best that SRAM has to offer. As to be expected for a range topping bike, the drivetrain is SRAM’s XX1 with the exception of a more economical XO1 cassette. The shifting with this set up is snappy and precise. 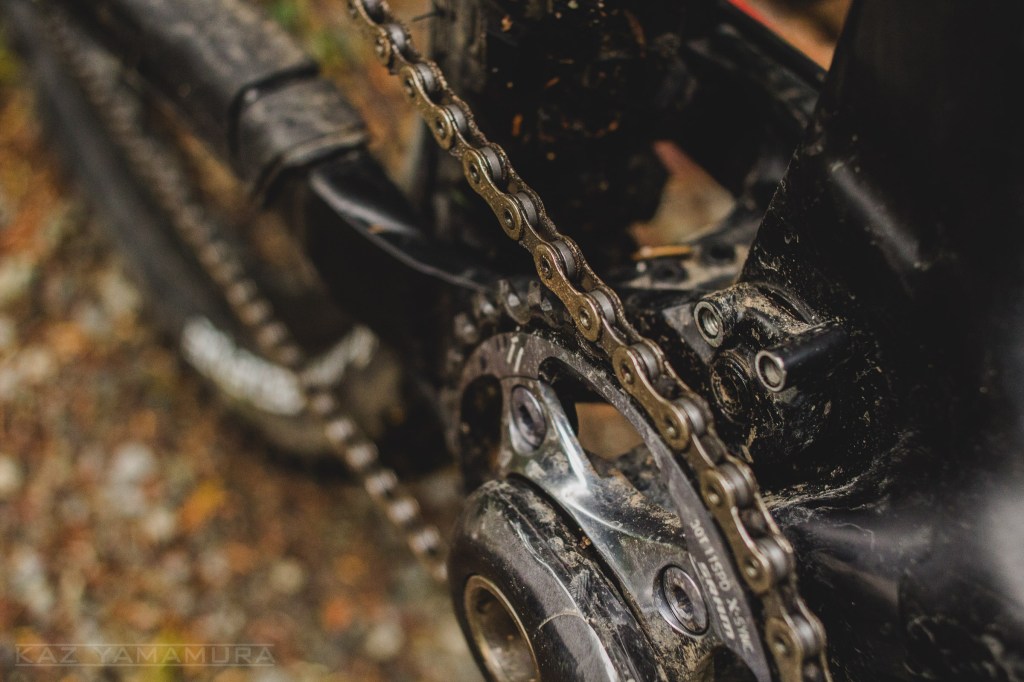 In Europe they still favour multiple front chainrings, so the Spicy has mounts for a direct mount front derailleur on the chainstay. If you don’t trust the new narrow-wide chainrings you can also throw on a chain guide with the ISCG mounts on the frame. 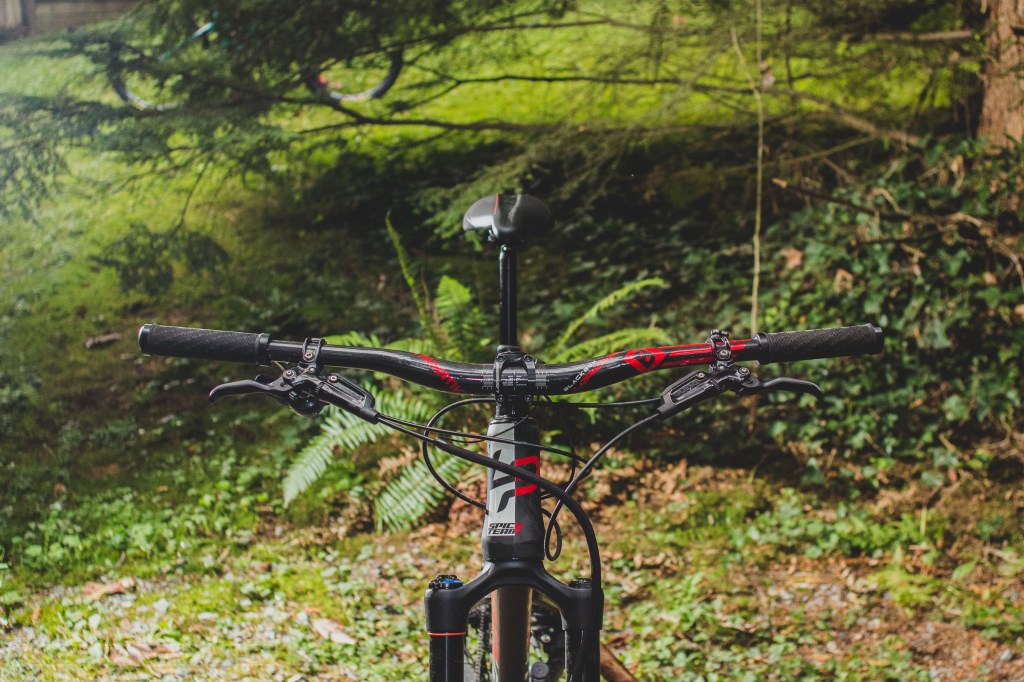 The #nogarbagecockpit is nice and clean with integrated mounts for the shifter, Reverb lever and brakes. A short 50mm stem is connected to a carbon Truvativ Blackbox bar that is just wide enough for me at 750mm. 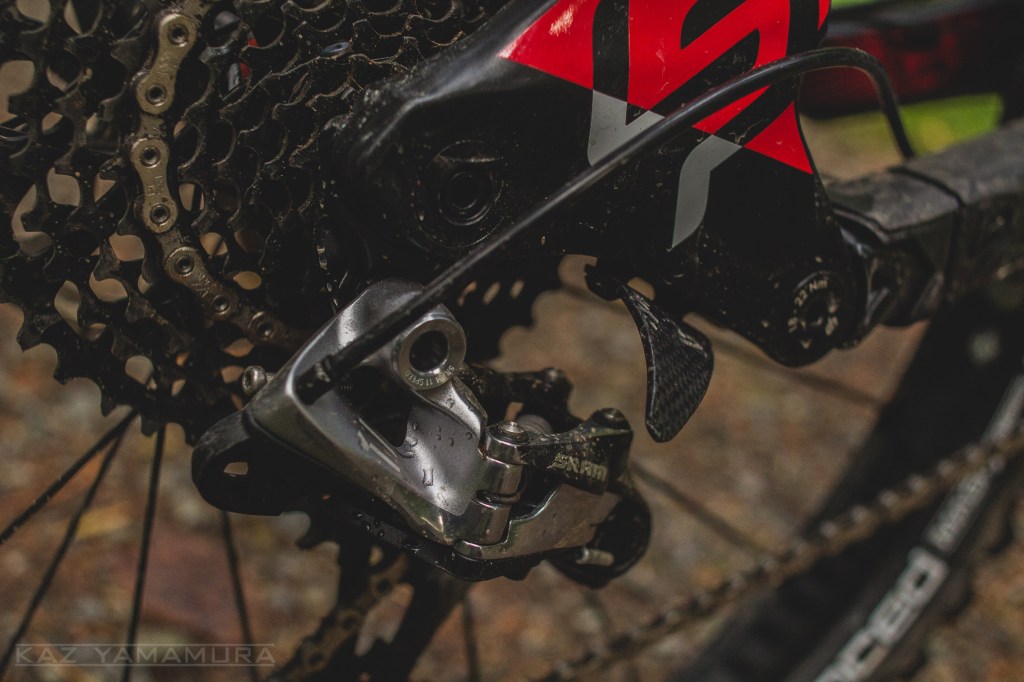 That little carbon fin might not protect the rear derailleur in the event of a big stack but it actually does protect it if you accidently lay the bike down on that side. Plus it looks pro. 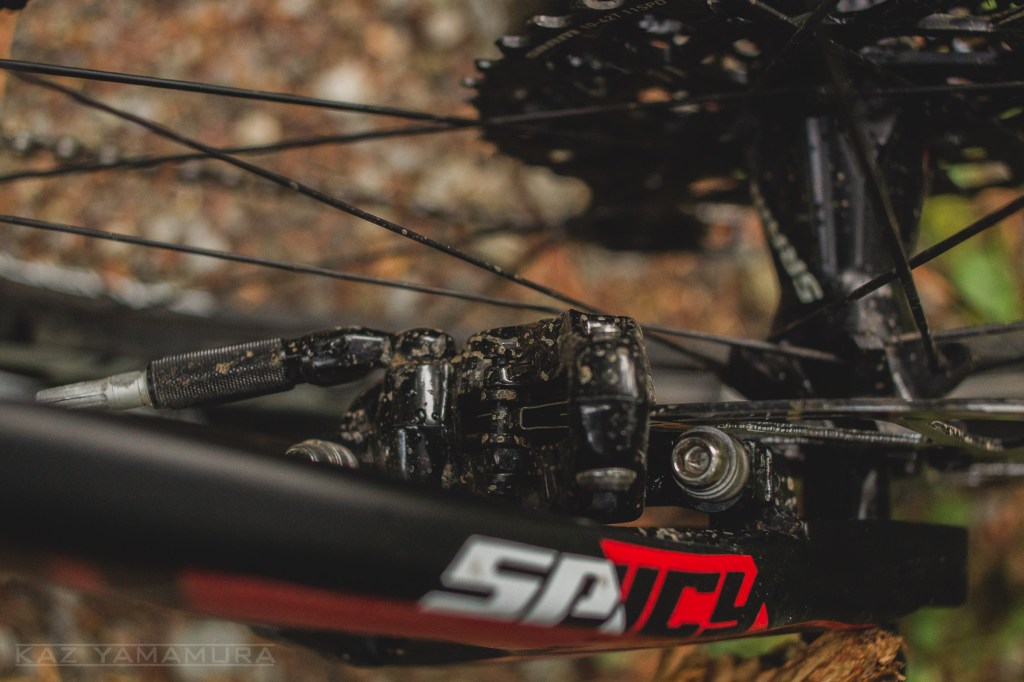 The rear brake caliper is tucked away inside the rear seat stay out of harm’s way. 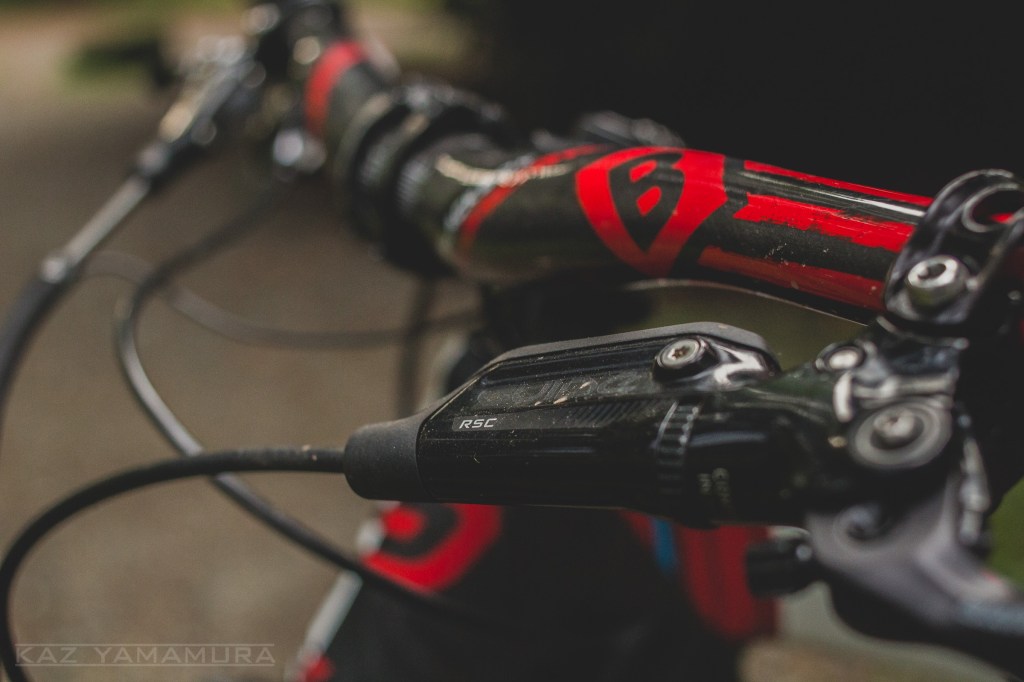 The Spicy Team is adorned with the new SRAM Guide RSC discs and with a 200mm rotor up front and 180mm at the rear, there is plenty of stopping force. Being a Shimano brake fan, the SRAMs have a lot to live up to and first impressions are that they have managed to come close to Shimano performance. 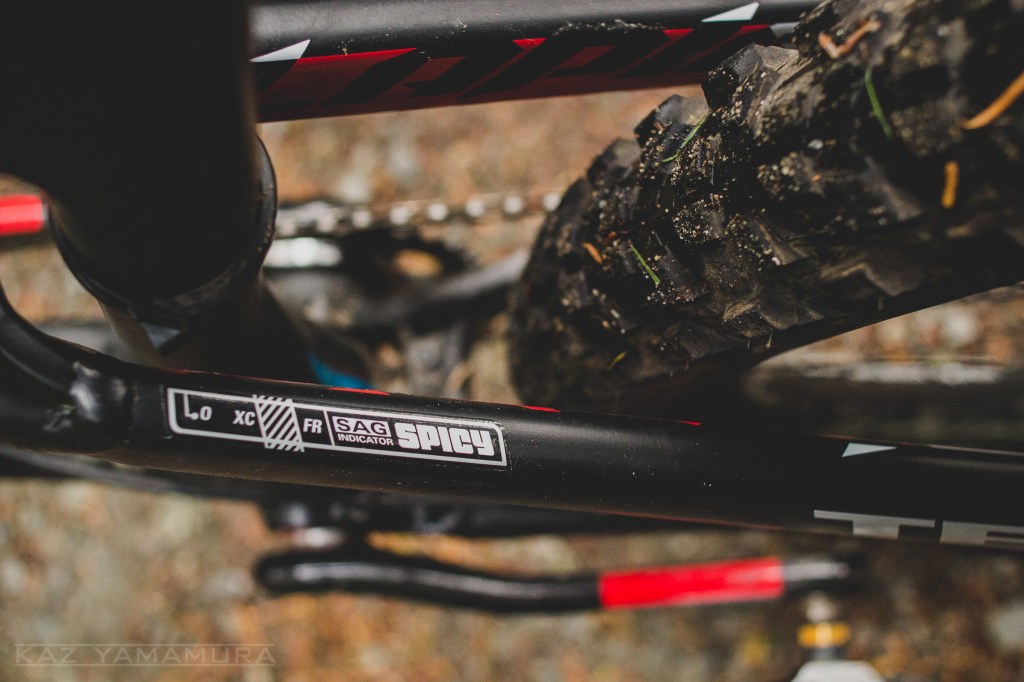 This sag guide on the seat stay of the Spicy is actually quite handy. It allows you to roll around on the bike in the attack position and see how deep the bike is sitting. I started off with the sag closer to the XC end of the scale and recently dropped the air pressure to be closer to the FR end. That small change has woken the bike up for me, making it much more fun on the rowdy stuff.

Will Nico’s Enduro race machine turn me into an alien on the trail? It’s pretty likely. The rear suspension set up, when fully open and flying down the trail, feels really controlled. The geometry is encouraging me to be aggressive and throw the bike around and the build hasn’t had me hankering to change anything. Time will tell if I can fool the E:I control of the rear shock but I’m going to try my best. The Spicy Team tops out the range at $8500 USD with two models sat below it.

How do you feel about electronic sensors on your mountain bike?

i have been riding the Zesty TR for 3 months now and love how stiff the rear triangle is and am impressed with the Ei shock. I usually ride a hardtail so the no fuss is very appealing and i find it is incredibly responsive,especially while climbing the steep tracks in my hood. Haven't messed with the compression settings, running it at Auto 2 for the most part, but i think you will be quite enamored with this rig.

The tires are actually proving to be really good. I'm getting picky with tires in my old age, but these have a similar ride to a Maxxis DHR2. The edge knobs give really good support when the bike is cranked over which I like.

Interested to see how this comes out, but how about them Michelins?! (I know, totally off topic, but intrigued nonetheless.)