What do you get when you take twelve eager female mountain bike enthusiasts, mix in steep & dusty Cariboo trails, and throw in an authentic cowboy rodeo? Answer: One hell of a rowdy time and plenty to write home about. 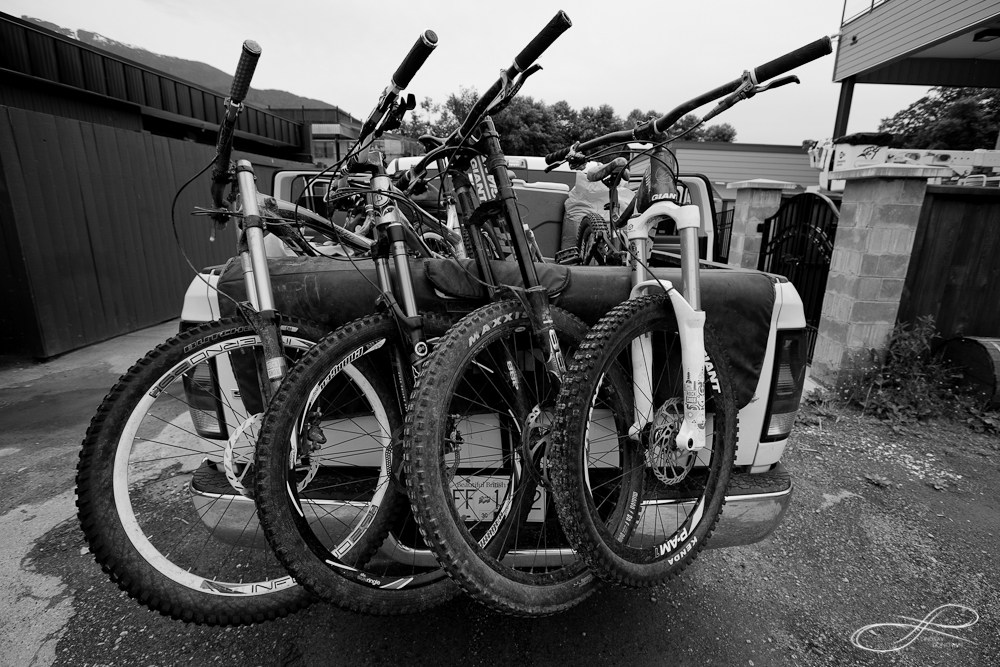 Earlier this month, twelve females from over the Fraser Valley, Vancouver, Squamish, and Whistler took a chance on a casual ladies-only bike trip organized by Monica McCosh of Ryders Eyewear, and guided by legendary Johnny Smoke of Bush Pilot Biking. They set their sights on riding some of the infamous freeride finger lines of Williams Lake. The goal: ride it rowdy. The result: got’r done.

Before the weekend was underway, stories started cropping up. Let me ask you this: how many girls does it take to fill a gas tank with diesel? Four chicks and $120 in fuel later, the new road toy was being towed to the nearest mechanic… 10 minutes to close… on the Friday of a long weekend. How many dudes does it take to reverse the mistake? Two to do the work, four to stand around and gawk, drink beer, and enjoy the show. Yep, let the good times roll. 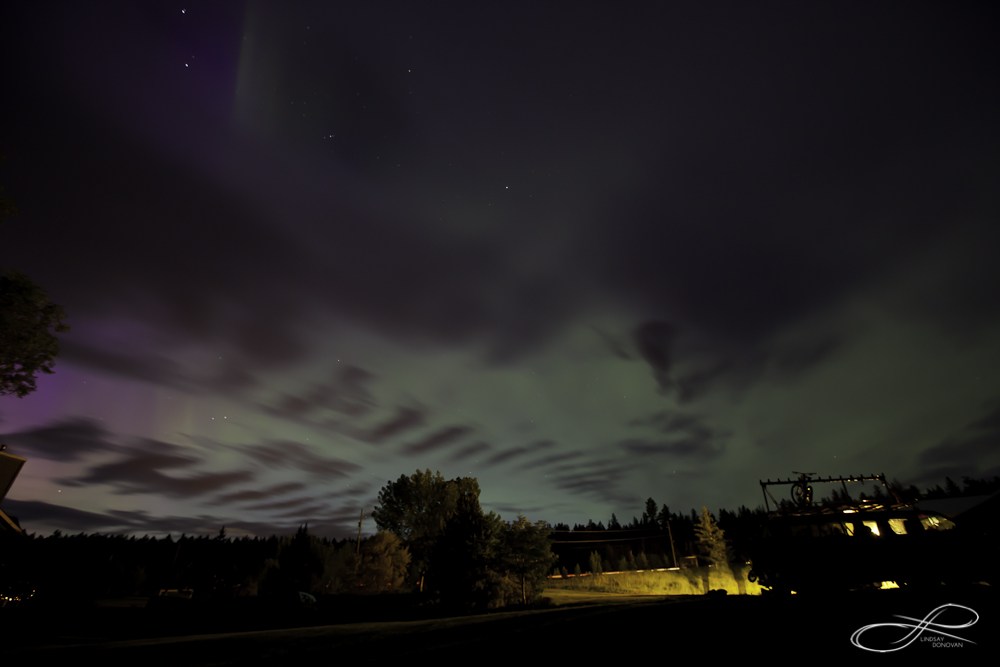 After the two hand a half hour delay, our crew hit the road for Williams Lake and a beautiful lakeside camping spot on Chimney Lake. Aurora borealis welcome the girls into the Cariboo night. 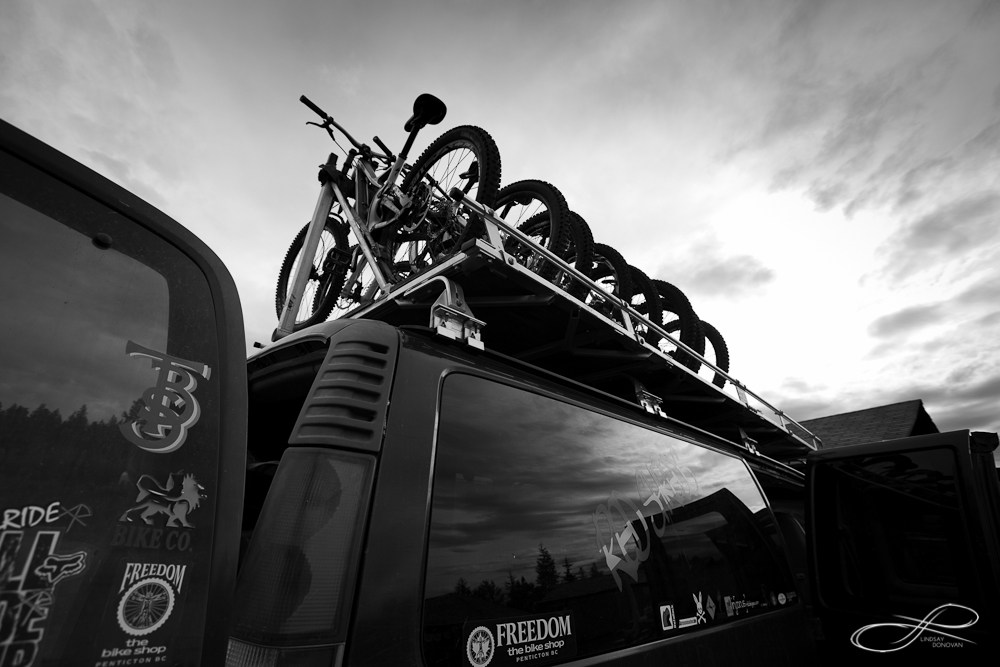 With the bikes loaded, we headed into town for some stomach fuel. The 87th annual Williams Lake stampede was in full swing as we cruised down the town’s main street and what looked like its entire 12,000 citizens were out in lawn chairs dotting the road. Rolling by in Smoke’s 13 passenger van with a full bike armada rigged on top, we quickly became part of the stampede street parade, accidentally driving through the crowds as they awaited the floats. The town really lays out the mat for its mountain biking tourists…

BC legend and mountain bike guide, Johnny Smoke of Bush Pilot Biking, was joined by local Sirel to help with shutting and lifting bikes. Hey – we offered. 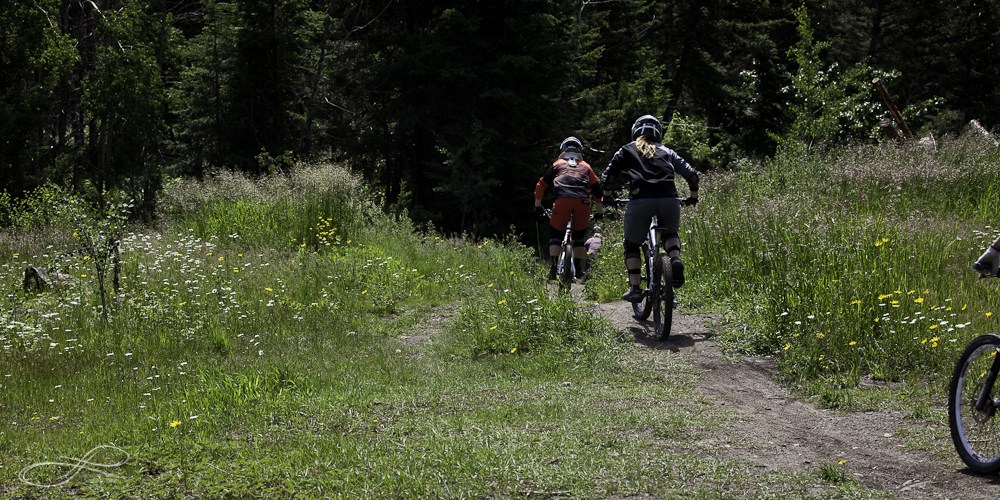 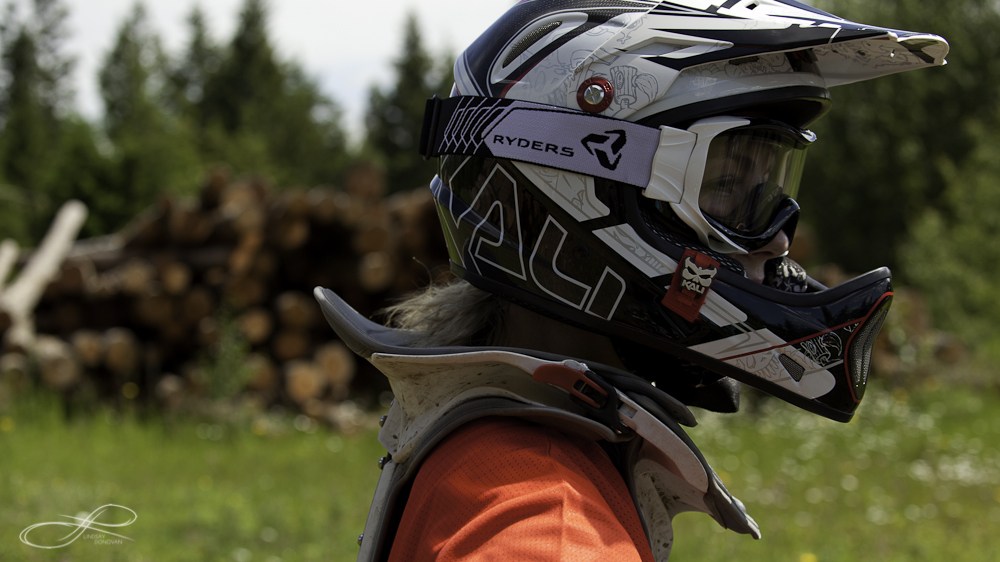 Although the self-proclaimed “Shangri-La” of mountain biking, Williams Lake’s main economic artery is logging. It also helps to make for an endless supply of wood for these ladies. 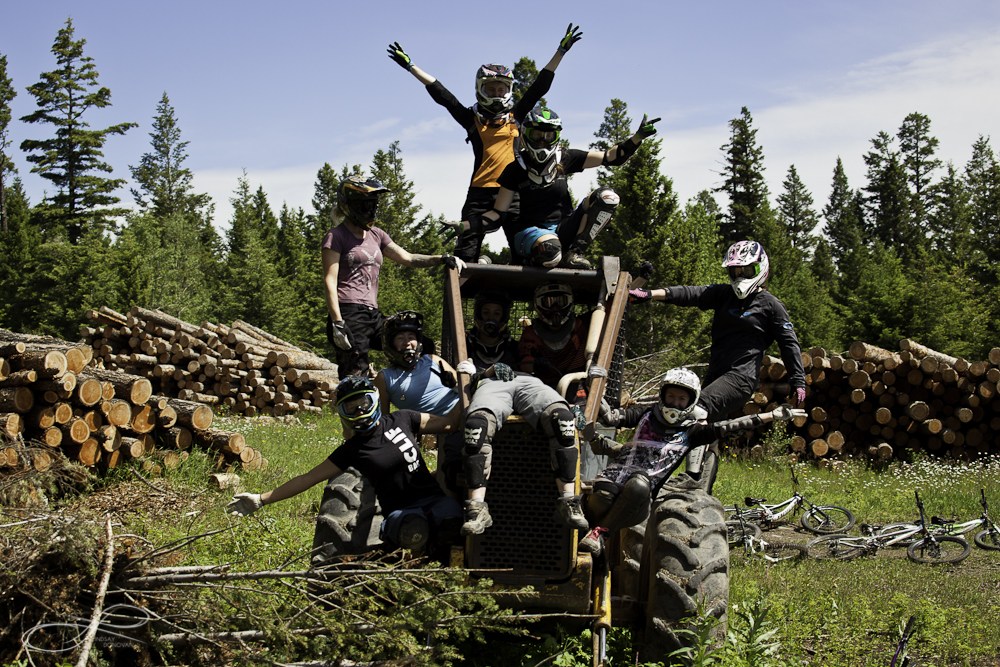 Ryders Eyewear stepped up to progress women’s freeride mountain biking by stoking out these everyday Jane’s with fresh SHORE mtb goggles. (Check out the NSMB forum test on these puppies HERE). 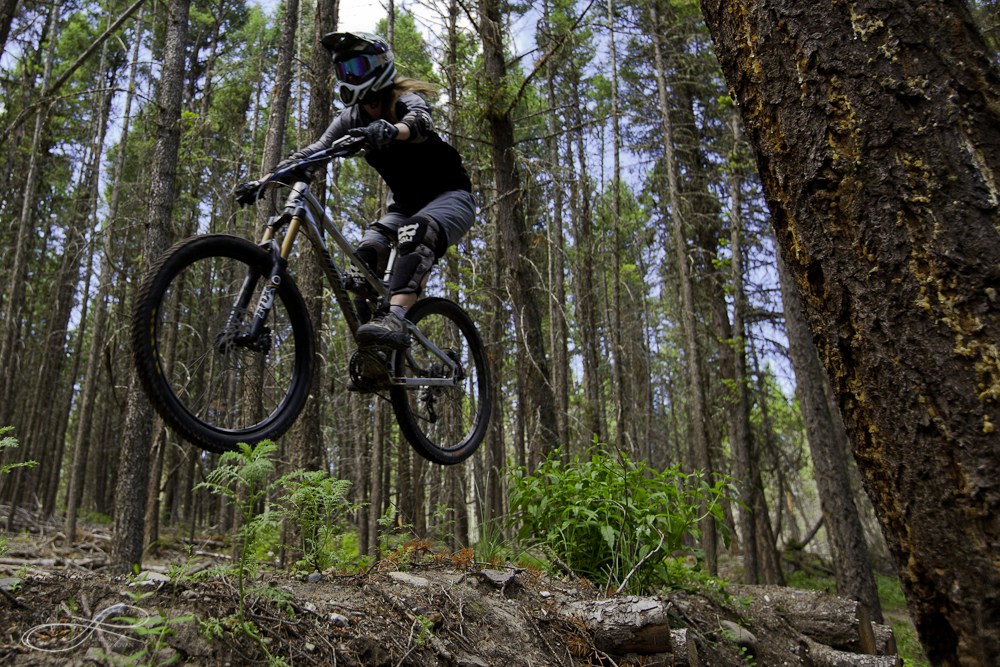 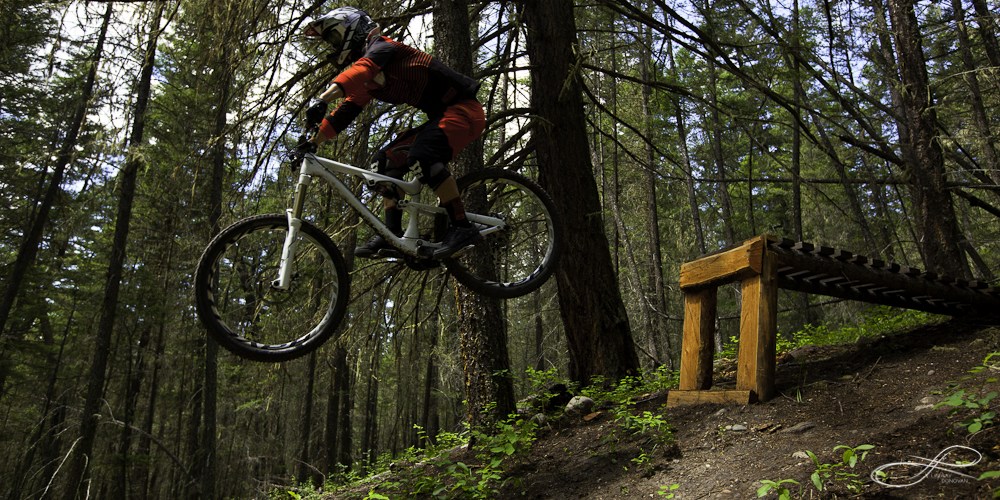 Leanne Tompkins, Summer Gravity Camps Coordinator, and ever the “school-teacher” leads the girls train off a ramp on A-Flo on Fox… 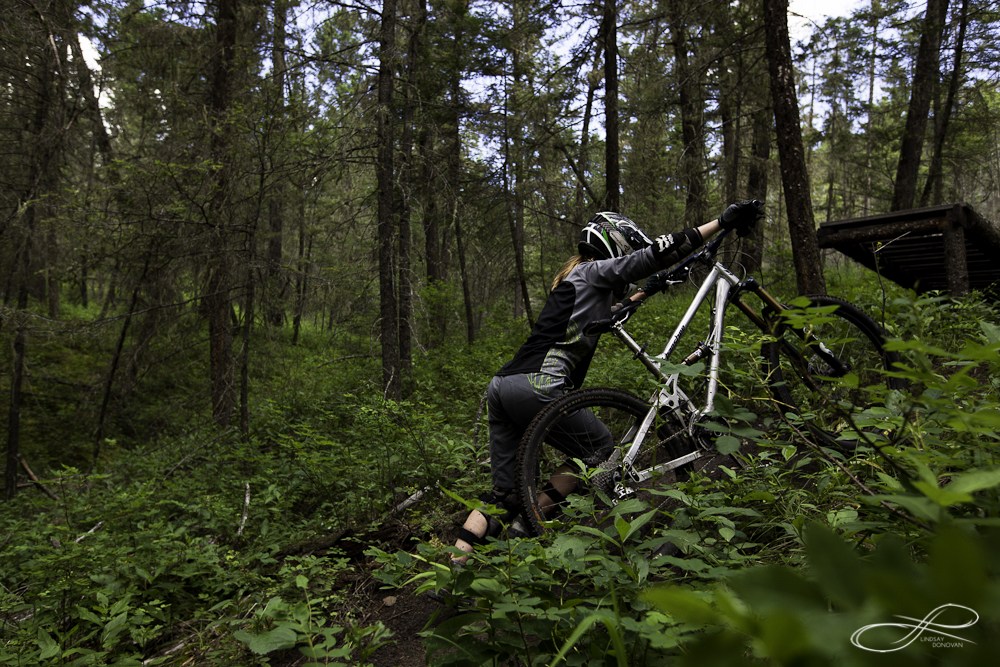 Gluttons for hike-a-bike punishment (and a good photo op). 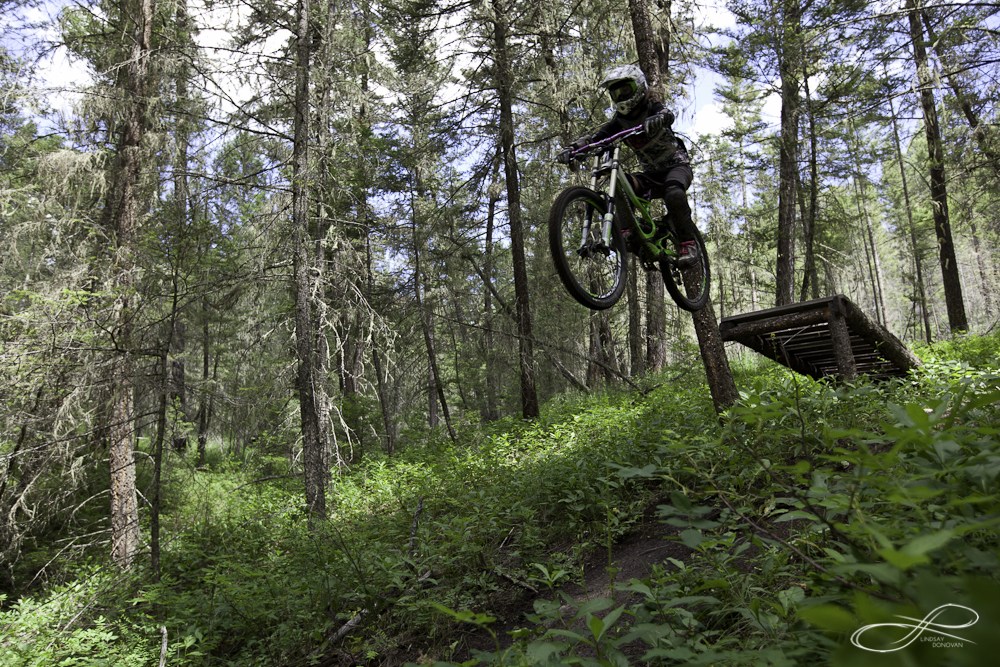 Mudbunny, Ashley Brassington, takes her turn to send it on the train before, well, the train-wreck. 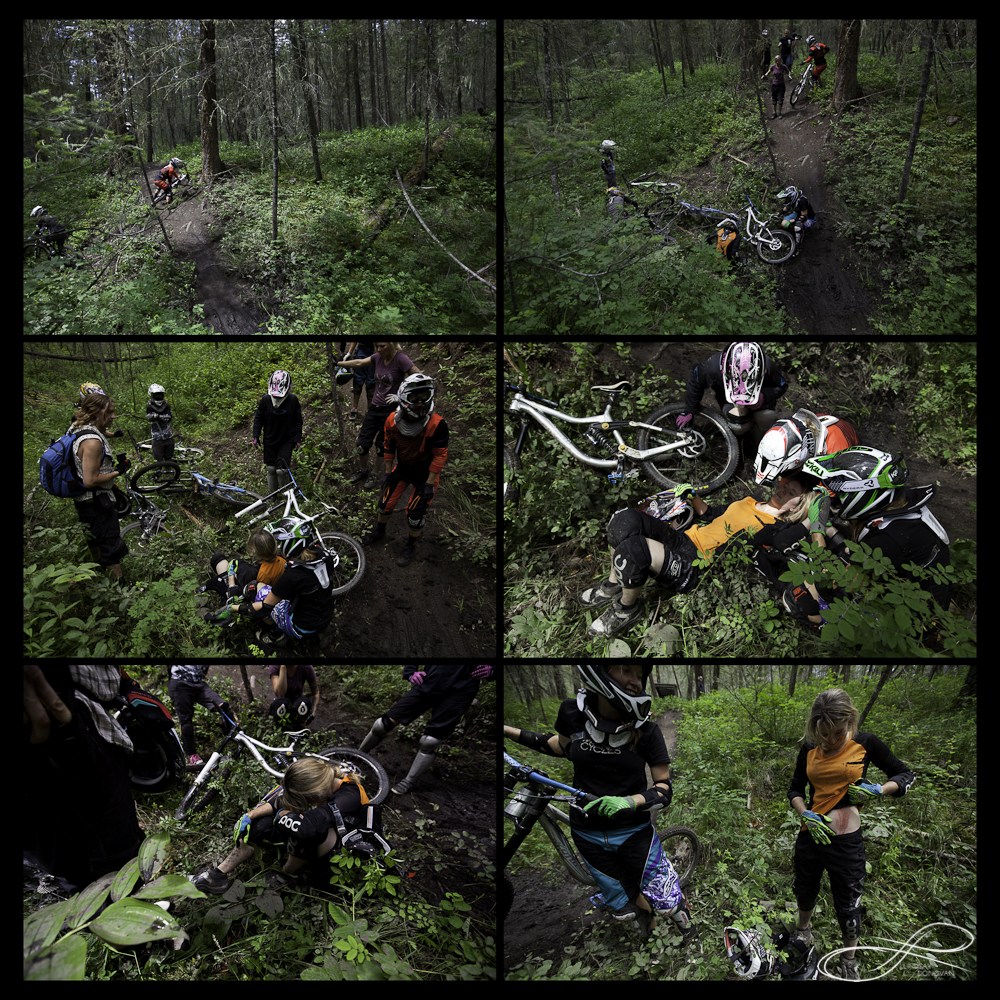 Train-wreckage. This is what happens when 5 girls follow each other in off a drop for the first time, into a muddy g-out landing. Whistlerite & UK expat, Rose Oakhill, took a frame to the face and a pedal to the stomach LIKE A CHAMP. And she still kept riding. 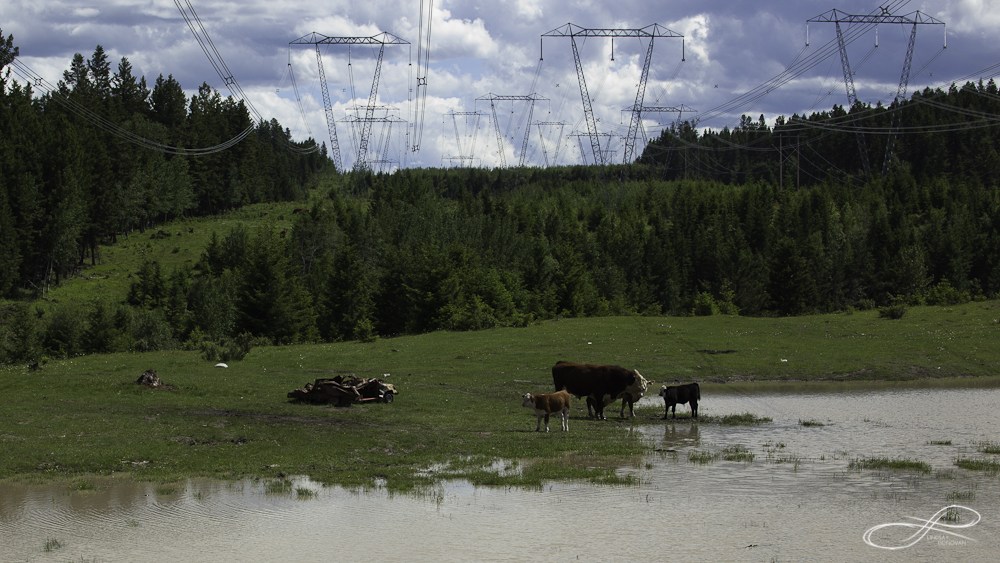 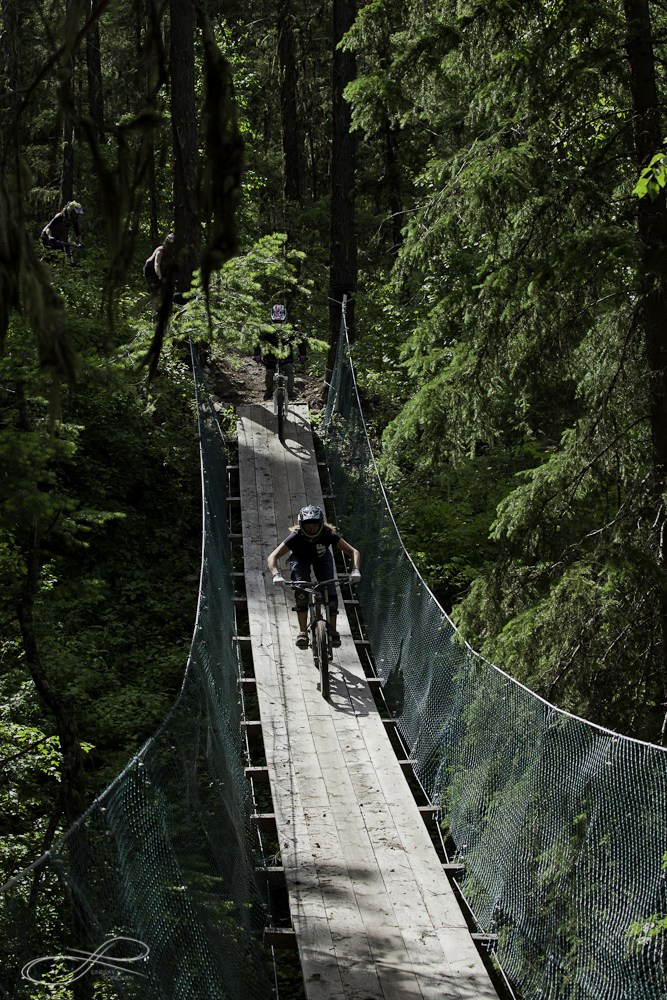 One can’t quite determine which is more awe-inspiring: twelve ripper chicks fearlessly shredding steep & loose lines on first descent, or the immense amount of time, energy, and resources put into the Williams Lake trail network. In 2011 the area secured over $50,000 in grants to rebuild Snakes & Ladders, a premiere freeride trail with over 22,000 board feet of lumber comprising the sky berms, tables, step downs, and balance-testing skinnies. For a small resource-based Northern town, mountain biking has found its place amongst both a rowdy landscape and townsfolk. 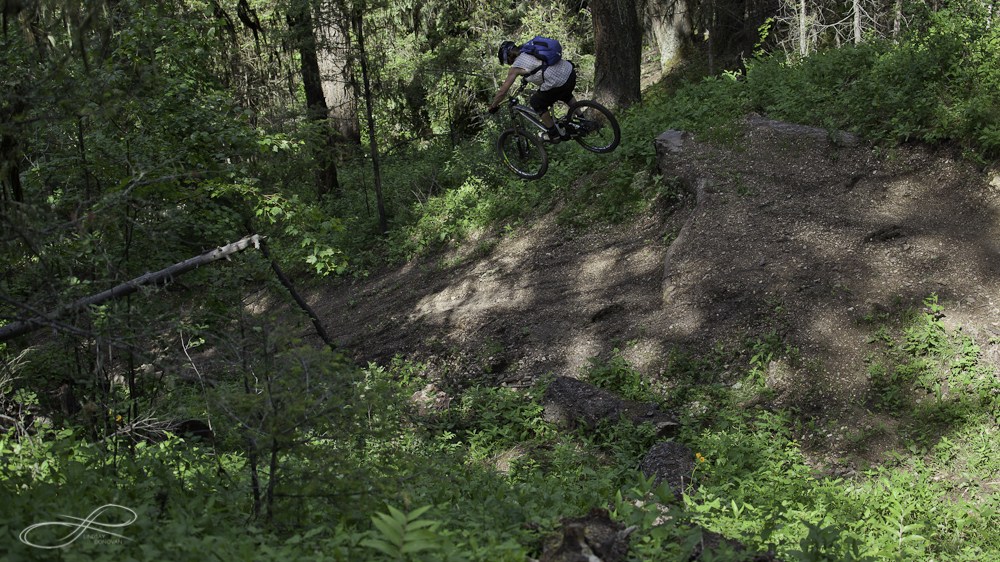 Smoke hitting a drop right after a smooth steep ride in. 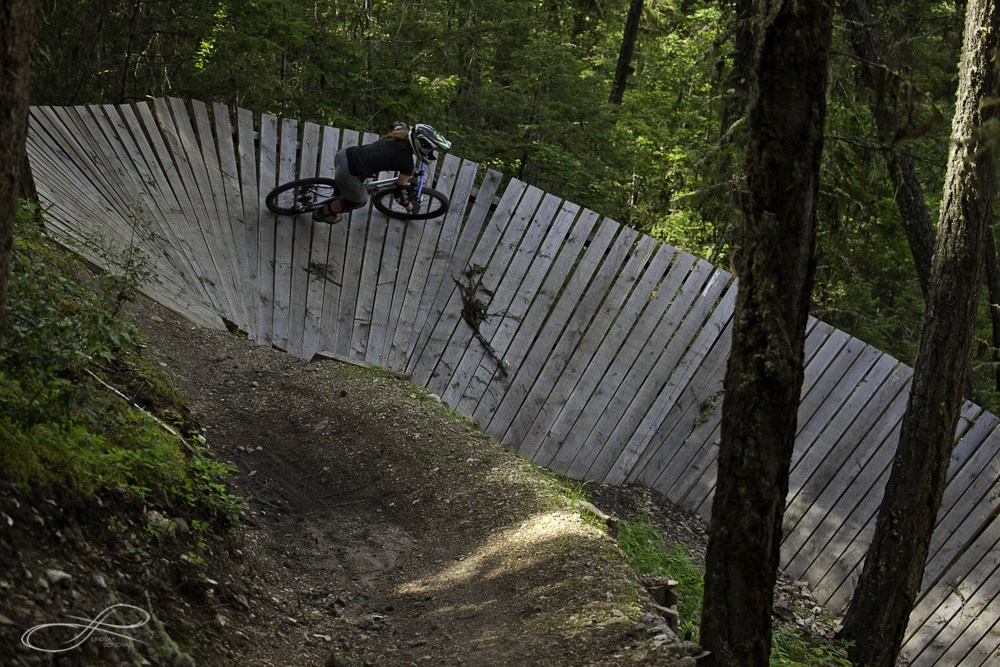 Monica riding one of the new sky berms on Snakes & Ladders. 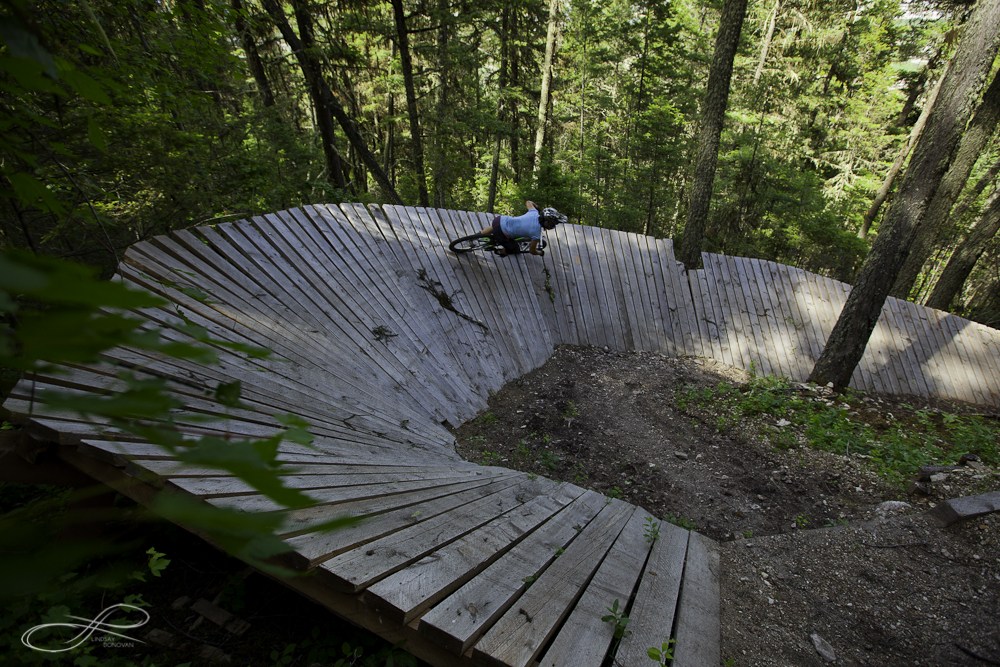 Aja Philp races into the next sky berm. 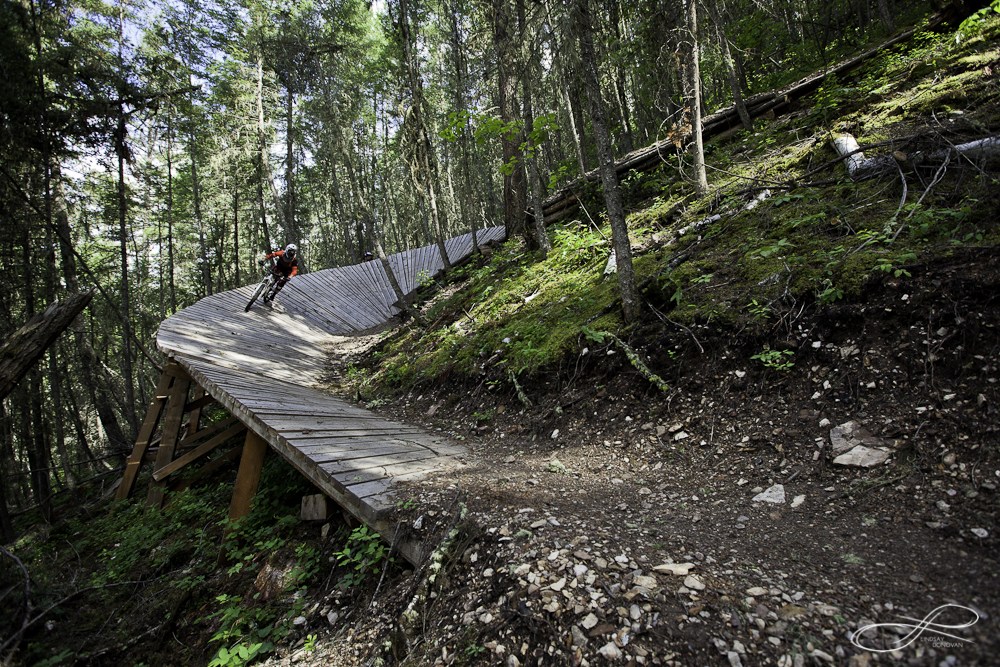 You know the feeling you got as kid whirling down the watersides? Yeah, this was better. Tompkins might have been squealing “weee” down this one. 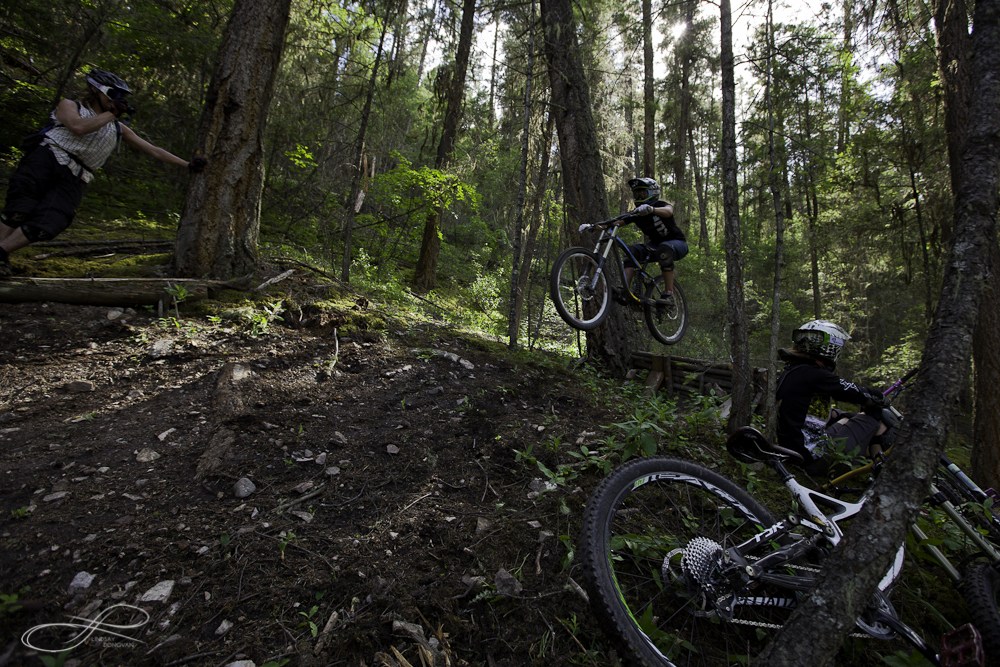 Mallory drifting over a cheeky step-up at the bottom of the sky berms. The trail was built so immaculately, trail flow and rider stoke was at an all time high. 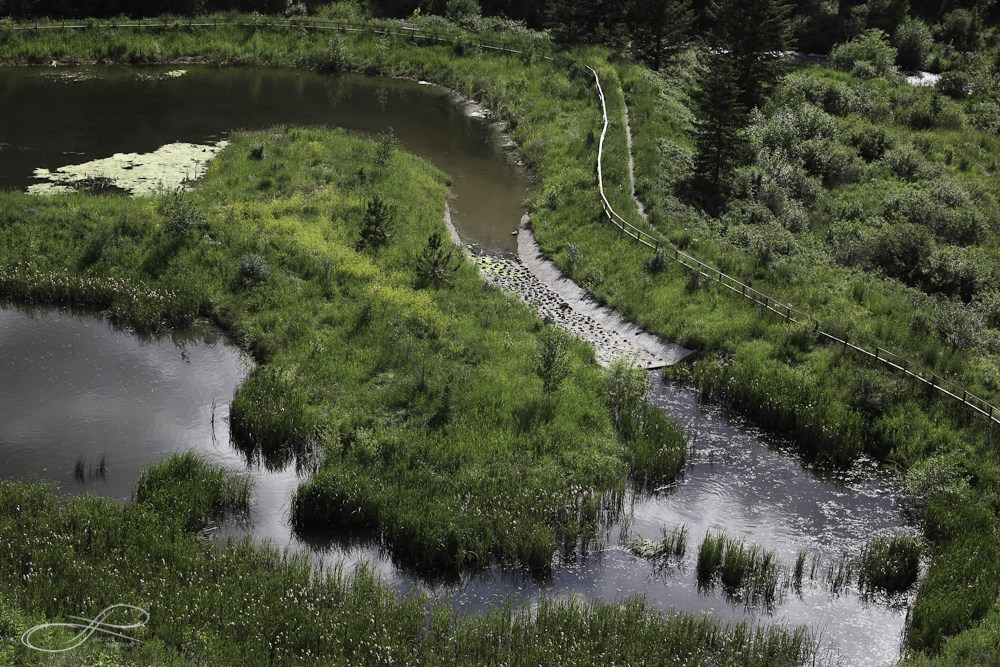 Snakes and Ladders / BackDoor can be deceiving: do I bring my pedal bike or my big rig? The pedaly first half, however, is more than made up for with the steep and loose gorge you descend into right after pausing. Lydia Schayes, Fraser Valley MudBunny and Velocity Cycles shop girl, revels in the calm before the storm. 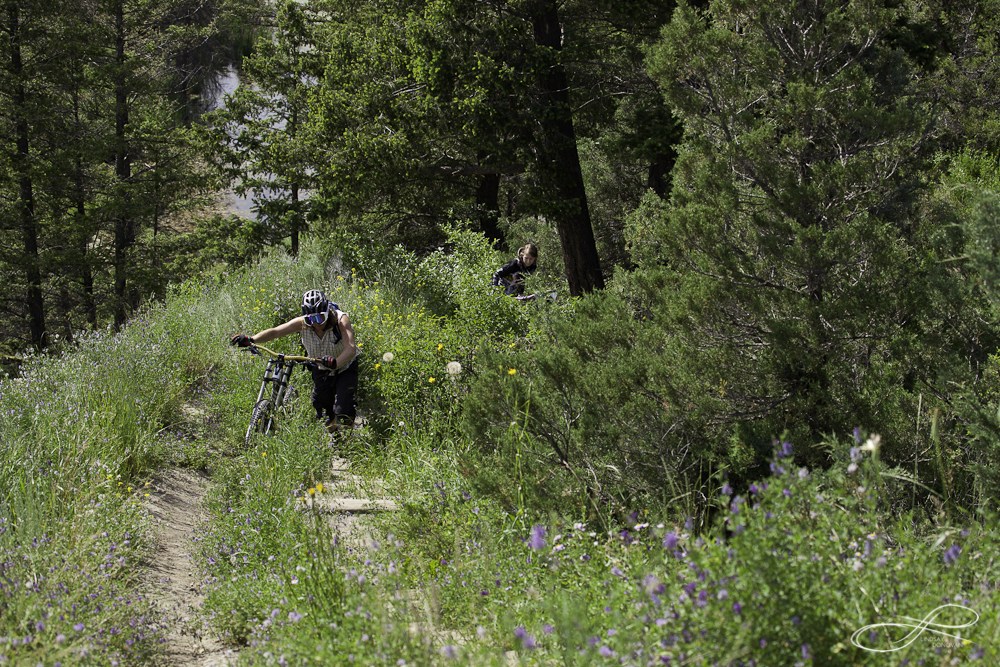 In the mid day heat after a lengthy ride and steep hike out of the gorge, meant it was perfect time to switch to hot laps back on Fox. These girls just couldn’t get enough of the Cariboo dirt! 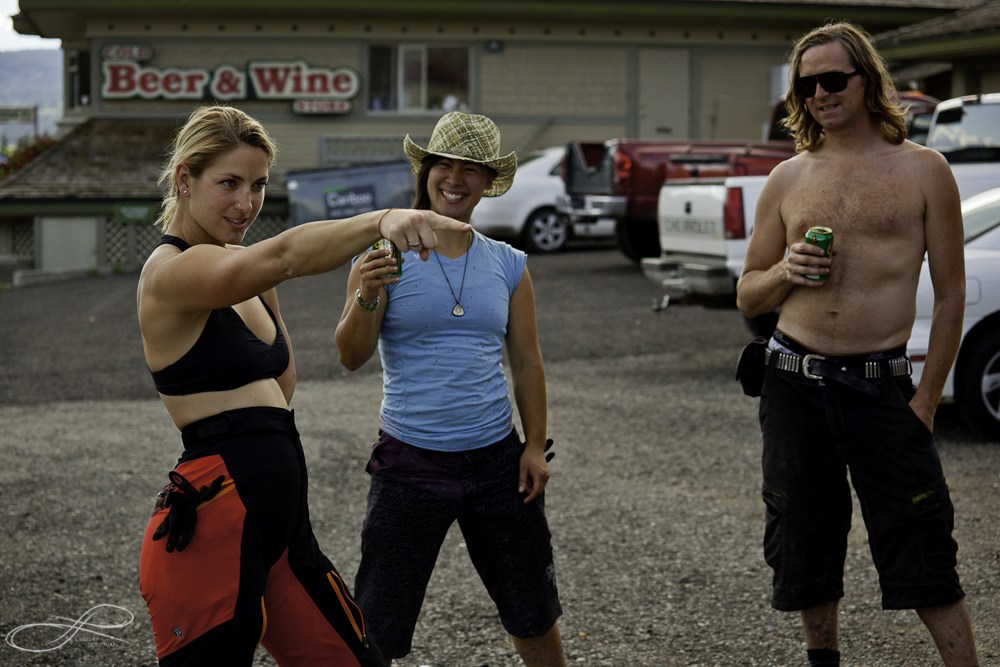 Conveniently our last laps finish outside the beer & wine store where wallets and throats were opened wide. Post-bike tom-foolery ensued with Tompkins demonstrating viral video hit “Prancercize” (YouTube it now). Thankfully she hadn’t mimicked the video hosts’ attire – camel toe and all. Philp and Smoke look on in a combination of stoke and… 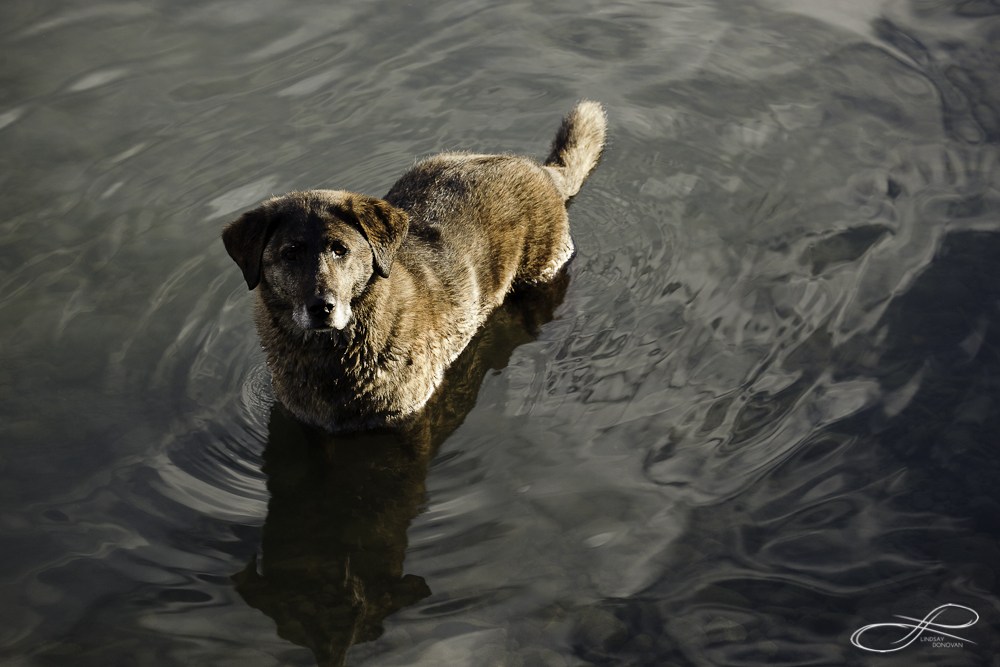 Back at the lake campsite, hearts and heads were becoming light with laughter and boozy dehydration. The Cariboo air was heating up.

How does a Canadian mountain biking female freshen up after a full day of sun, sweat, dust, and dirt? A cold quick dive in the lake, promptly followed by beers and coolers. Gettin’ er done. 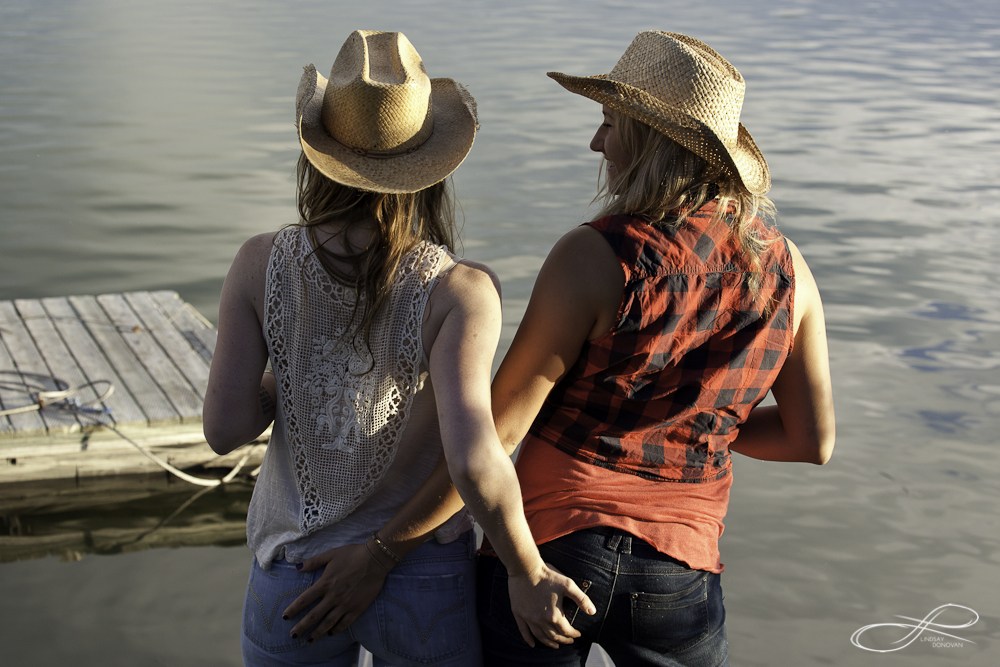 Ready to stampede, long time friends and roommates, Monica and Mallory, posed for a female Brokeback Mountain moment for kicks.

Dinner, a beauty of a sunset, and camp-style “gussying up”, meant we were ready to head into town. Yeeehawww! 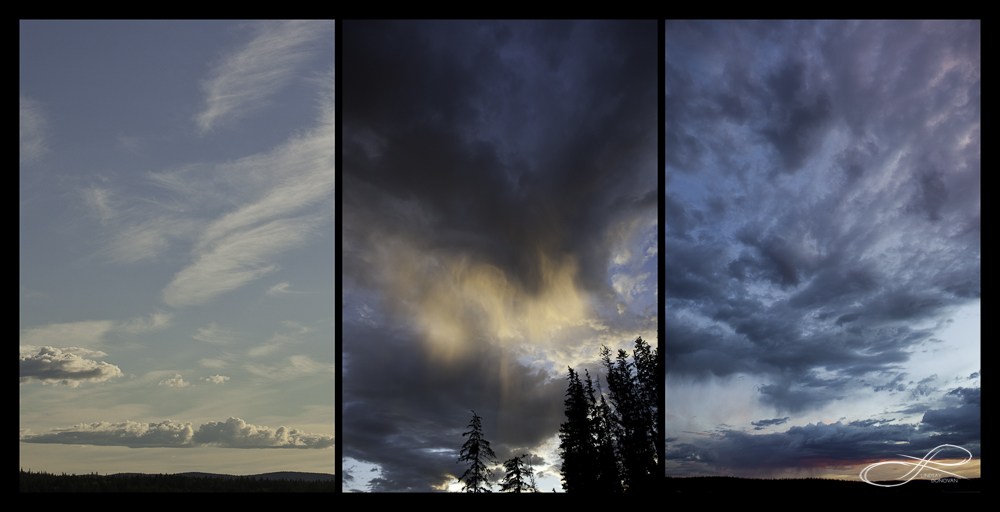 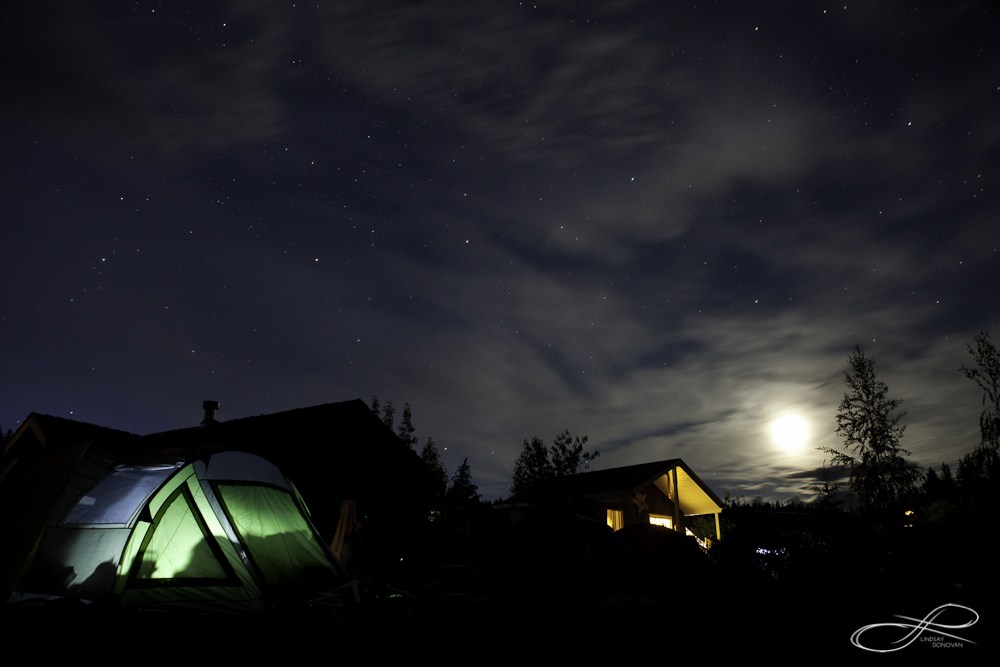 And the photographs end there on Day One. What you didn’t see: tequila margaritas, beers, sneaking into the Stampede’s beer garden through a crack in the fence, public urination behind an ATM in said beer garden, Smoke as designated driver witnessing it all, and one very raucous Golden Arch drive through stop…

One day in the Cariboo and these ladies already look to be experiencing all time conditions. In Part II they head for the chutes at Farwell Canyon – stay tuned!

It appears mountain biking does wonders for the hiney. Damn.

the fine gentlemen that primarily make up this forum have politely enjoyed this article and minded their manners. so allow me to speak for them all by saying, it was a good article, moreover, WE ALL WOULD LOVE TO SEE A LOT MORE PICTURES OF THESE EXCITING GALS.

Looks like a good trip. The beer and wine store pic is fabulous.