If my BEST OF 2015 was about gear, it’d only have one item on the list: the Fox Float X2 rear shock. Oh man, where do I start? 20 clicks of R2C2 (low and high speed rebound, low and high speed compression) is in my opinion, the sweet spot. It allowed me to dial in the shock exactly the way I wanted it. I’ve heard many riders on Cane Creek shocks talk about how they can’t feel the difference between 11, 12, and 13 clicks, because there are so many clicks. I felt a difference between each click on the Flaot X2, but not enough that each click felt like too much. The shock comes stock with 4 spacers, and up to 8 can be added VERY easily to increase ramp up near its ending stroke – or removed to make it more linear.

But that’s enough about the clicks on a shock, let’s talk about my favourite shutter clicks from 2015. 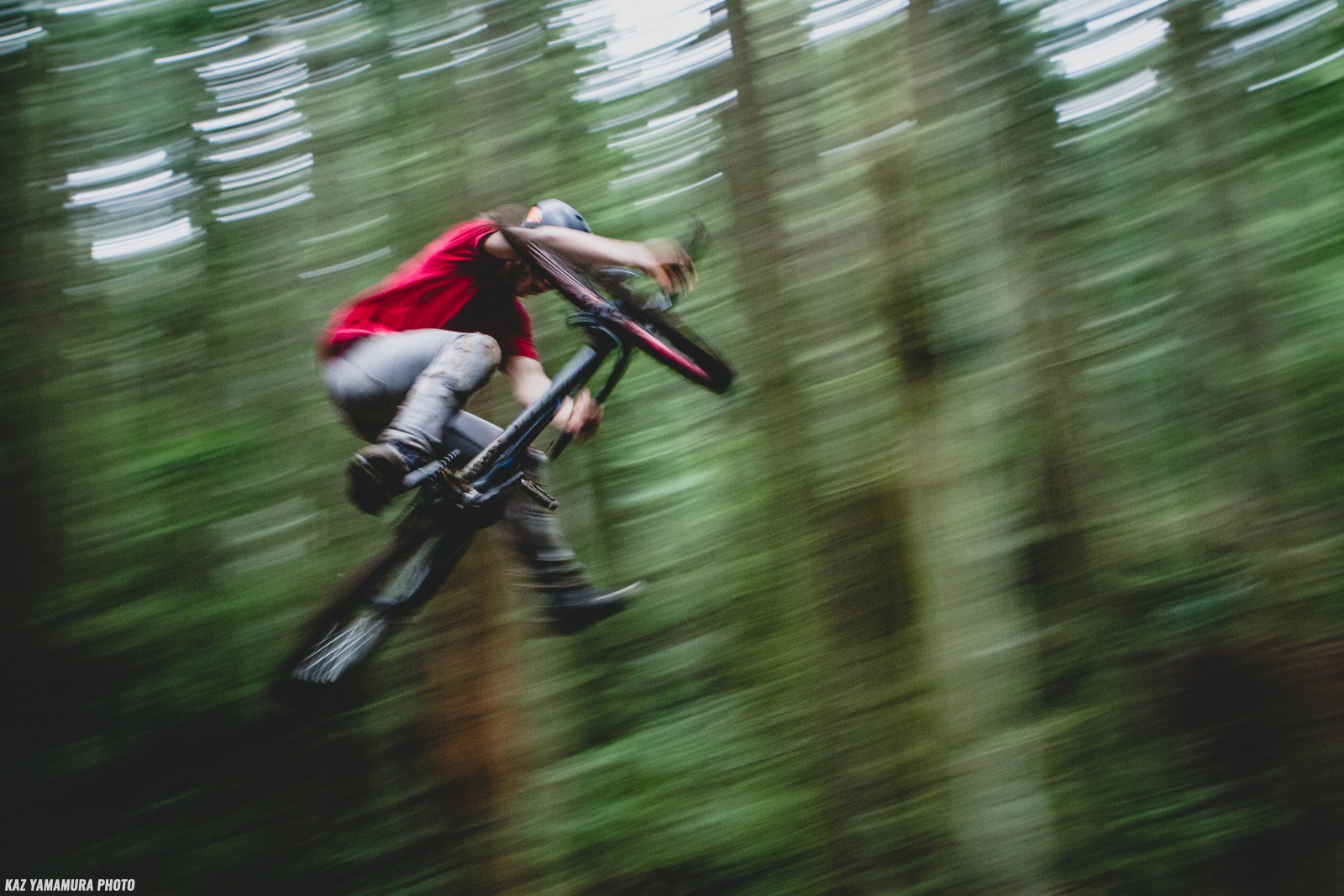 I first shot with this kid in September 2014. Caleb Holonko has progressed FAST. He’s got the tricks, he’s got the building experience and he still kills it on a longer travel bike. I shot this one after we wrapped a session of filming, fooling around with pans. 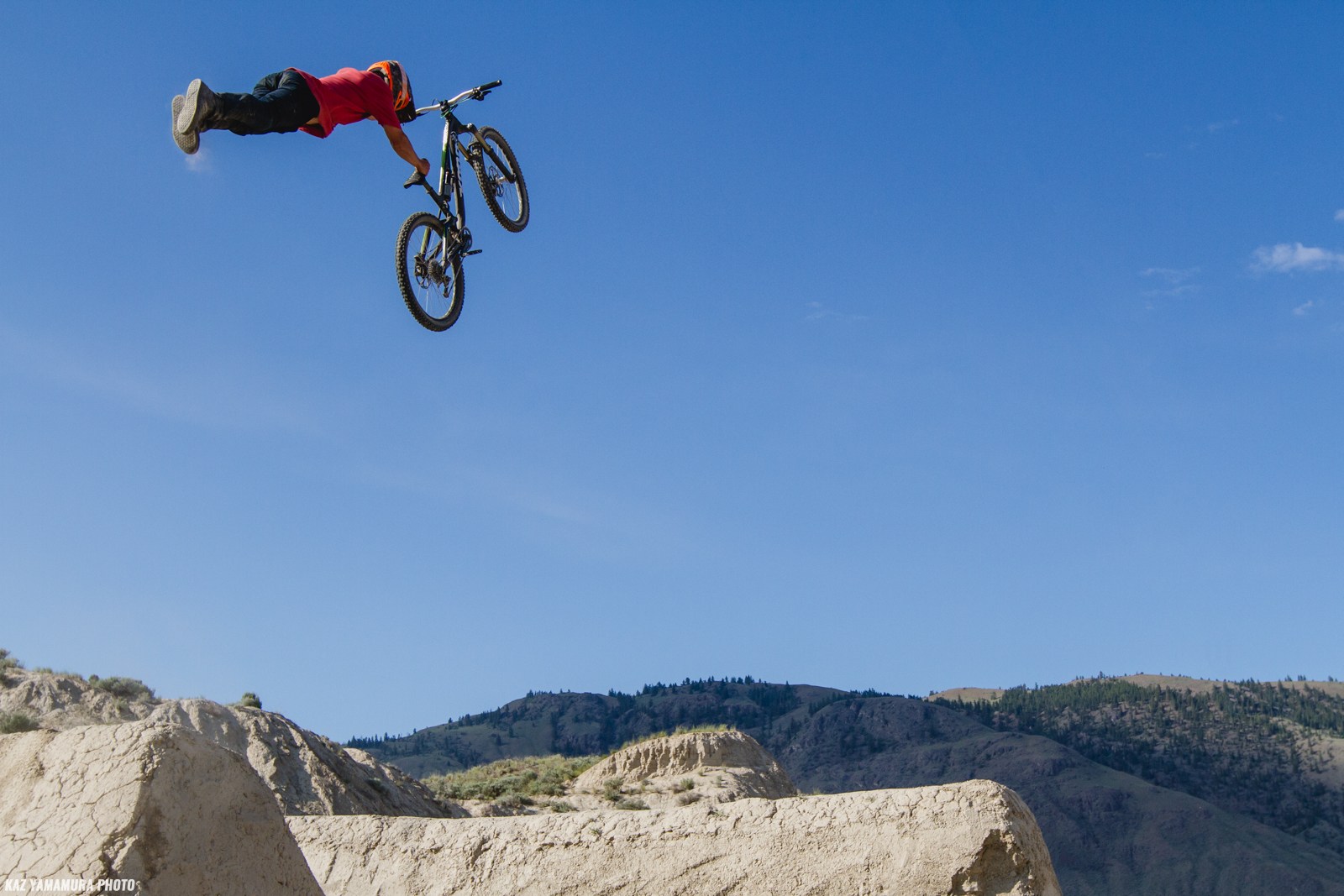 …And my first 4 picks are all shots of this guy. He’s willing to throw down for the camera, and throw down as many times as needed to get the shot. We shot this one a few times, and each time something was missing. “Hey… Try clicking your feet together mid-air.” Boom. 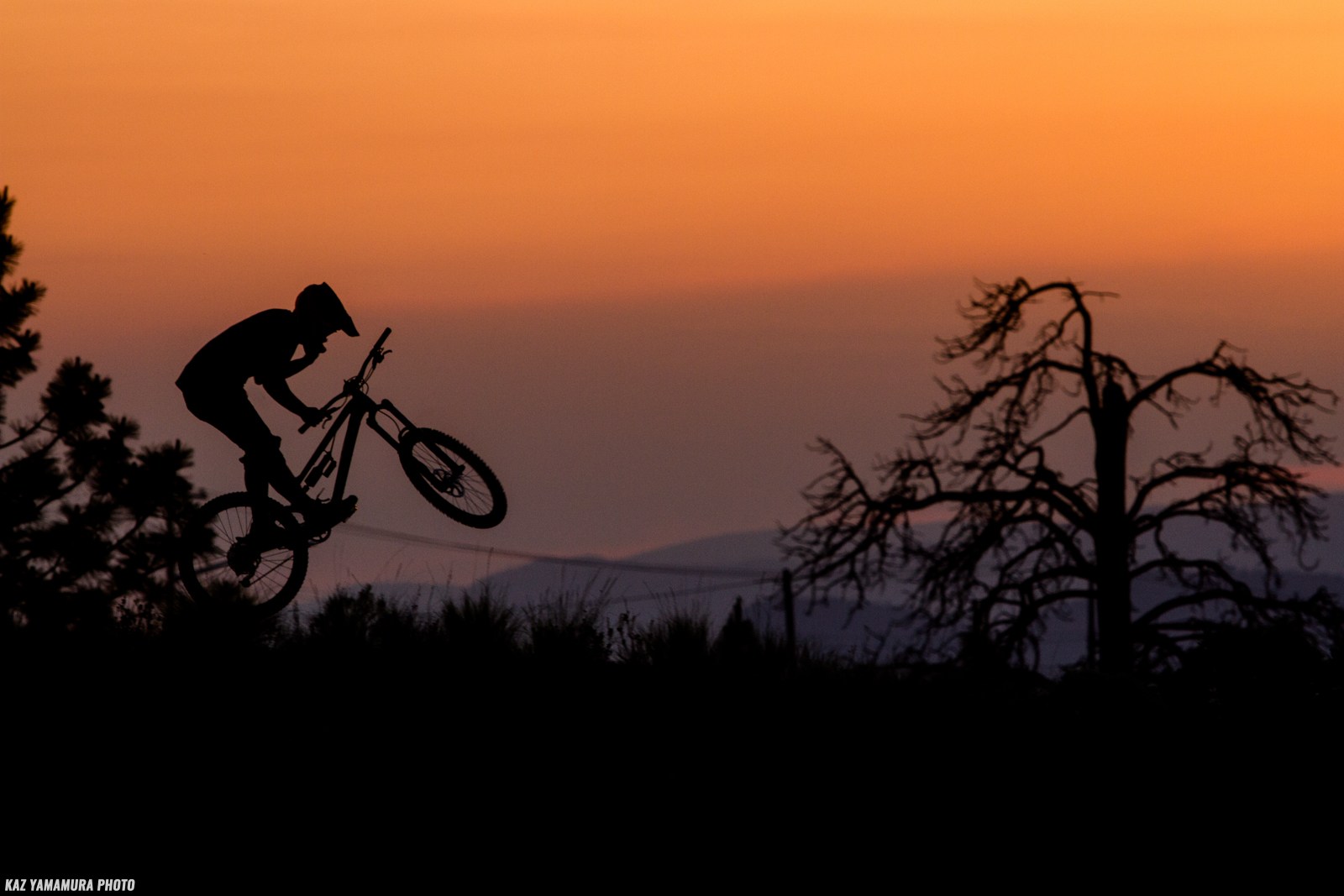 Another from the Kamloops trip with Caleb. He’d been riding all day, and was pretty tired and ready to call it quits, but I persuaded him to ride down a random ridge and throw a hop-barspin on his long-travel bike. 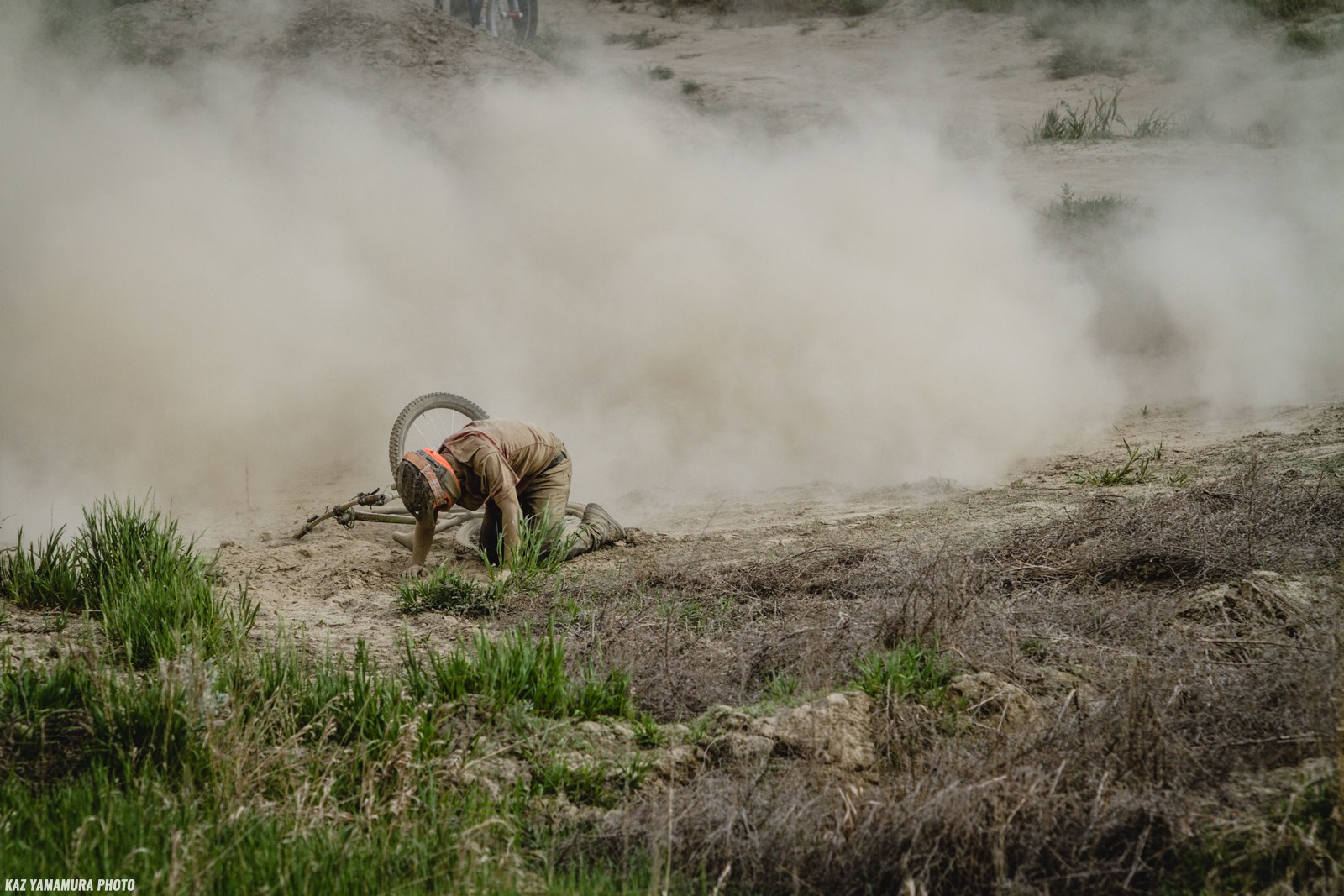 All riders crash. Caleb happened to land in about a foot of powdery dust after boosting high on a natural quarter pipe, causing him to wipe-out and create quite the dust storm… 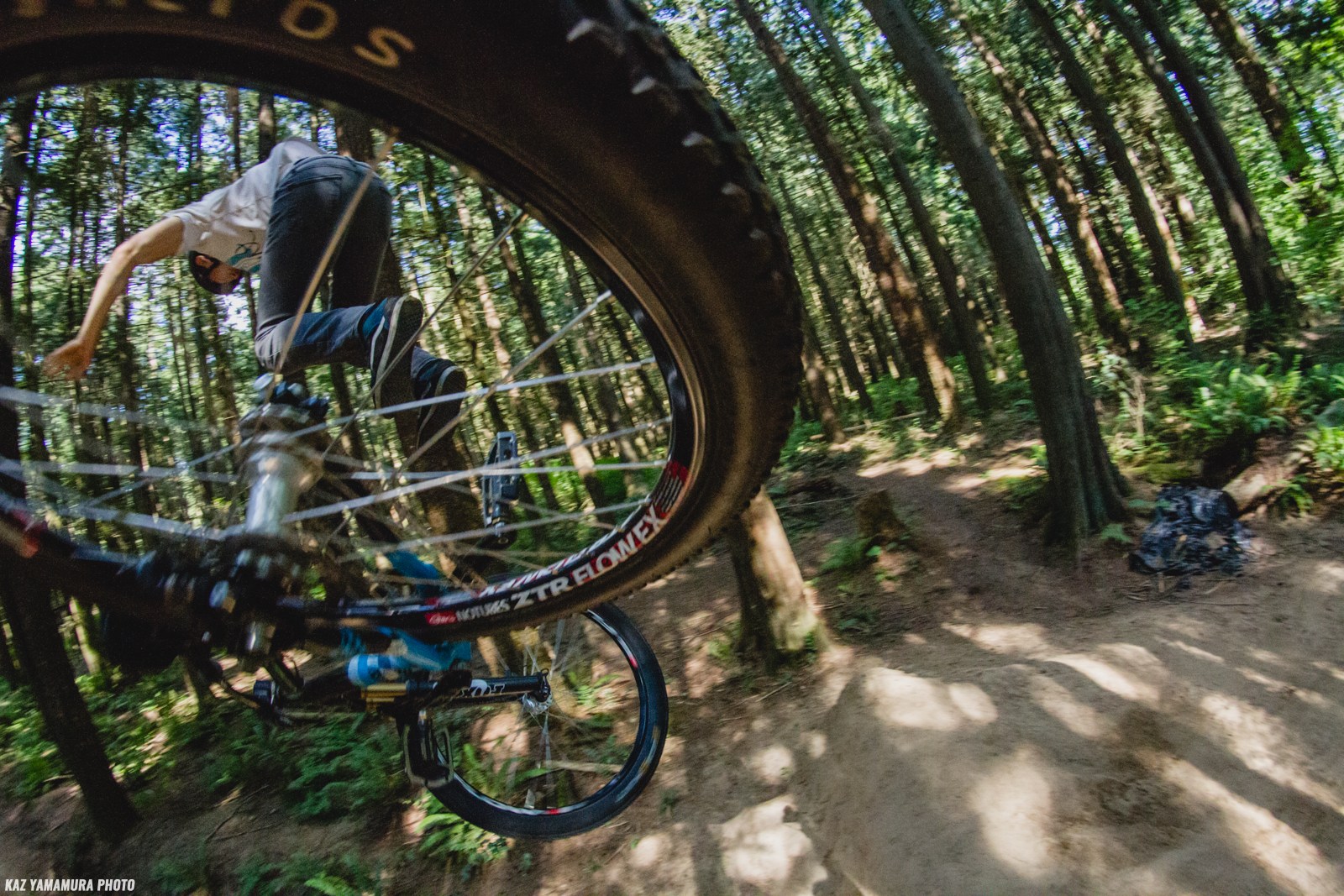 This was just a day of fooling around with Mark Balcita and Mike Chen, on our first “Asian InvAsian” session. Mike was trying some dumped 360s, and I was trying to get some up-close fisheye shots… Until Mike ejected mid-spin and threw his bike towards me. I snapped this shot of him framed nicely in his wheel moments before his bike hit me. 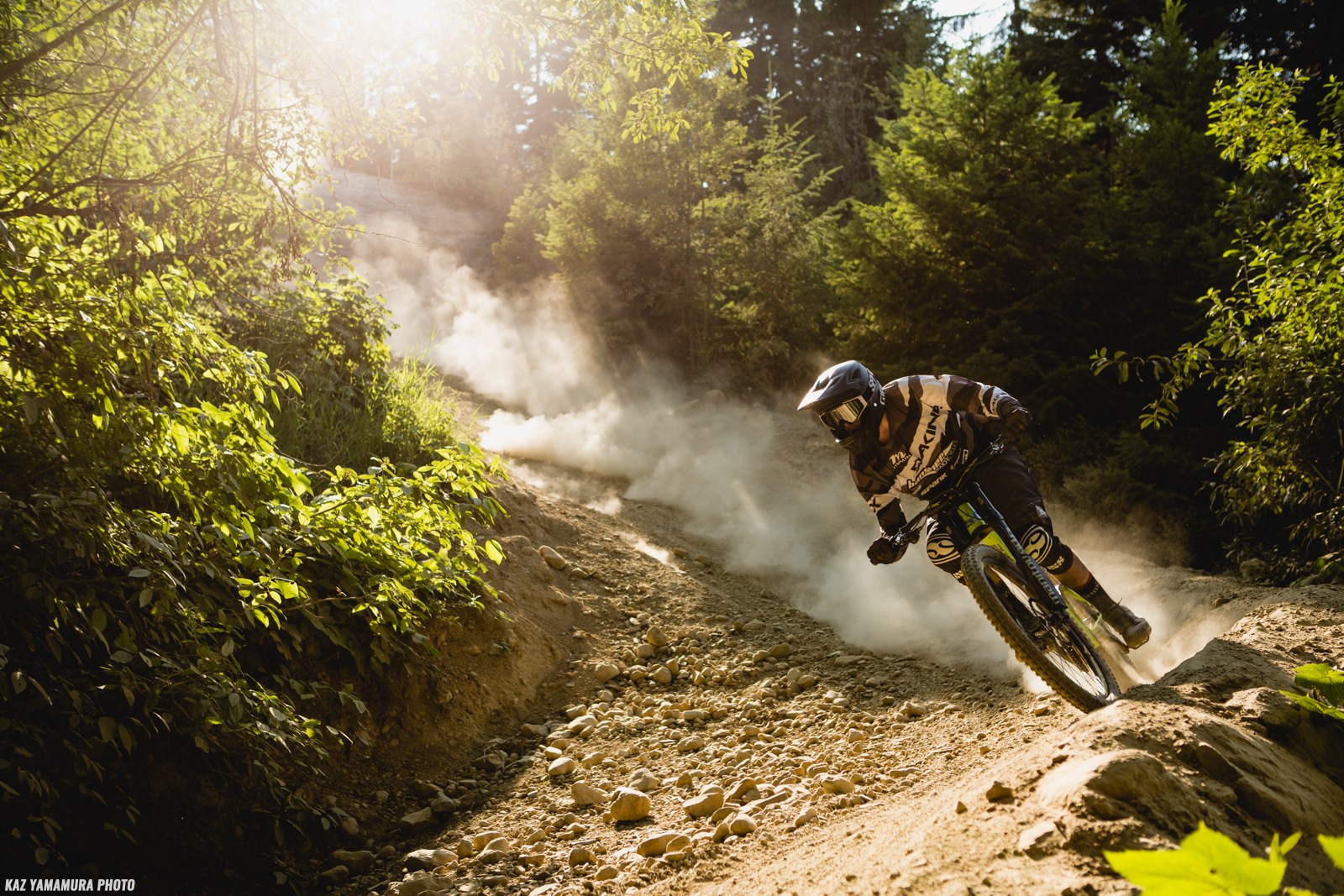 I spent a day in Whistler riding and shooting photos with former junior National Champ Daniel Shaw. He may have worn dark colours (no no no!) but the dust helped separate him, and dat light tho. 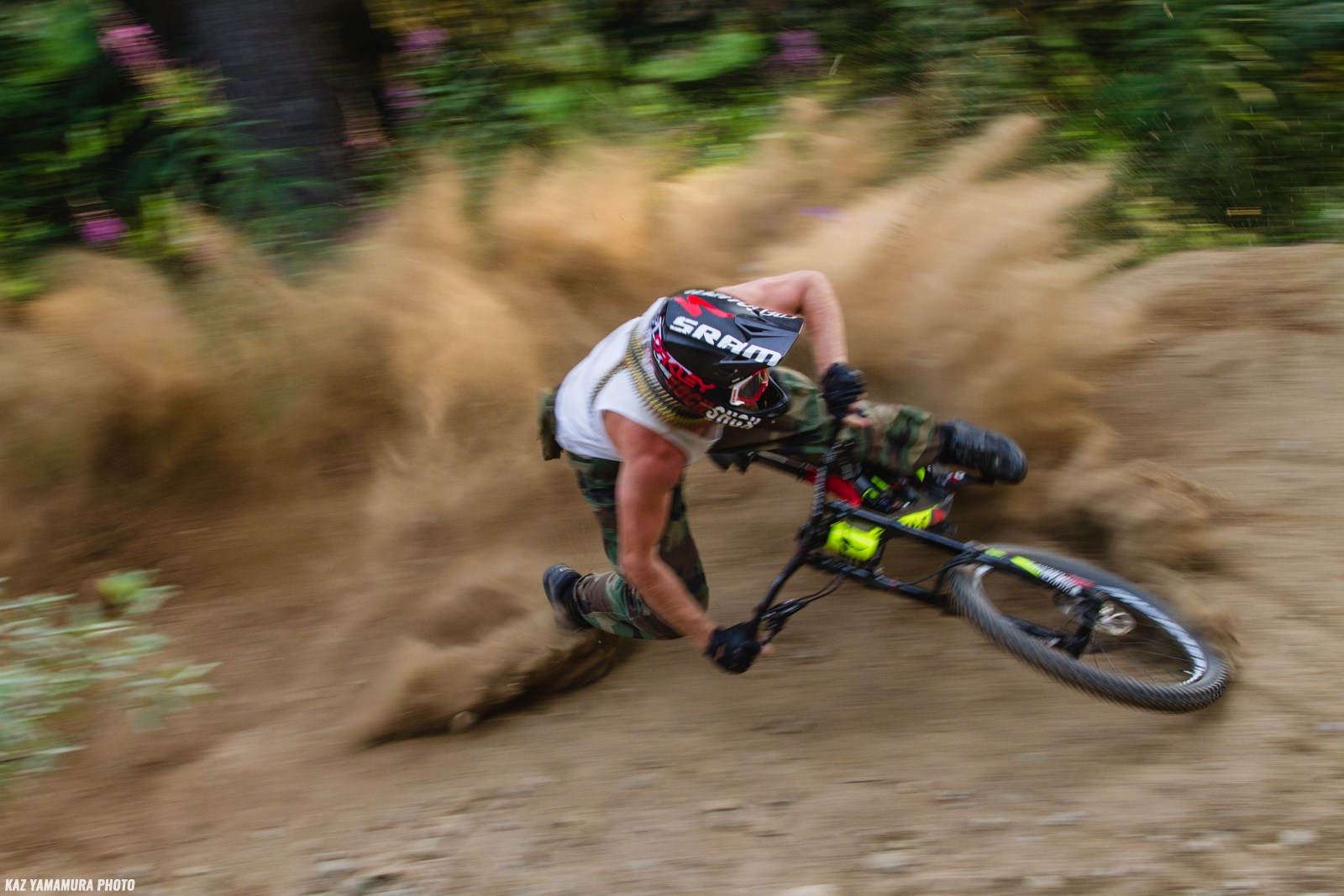 Kyle Norbraten roosting for The Sickest Edit Ever. It’s not tack-sharp, but I think the pan amplifies his speed and the amount of roost he created. 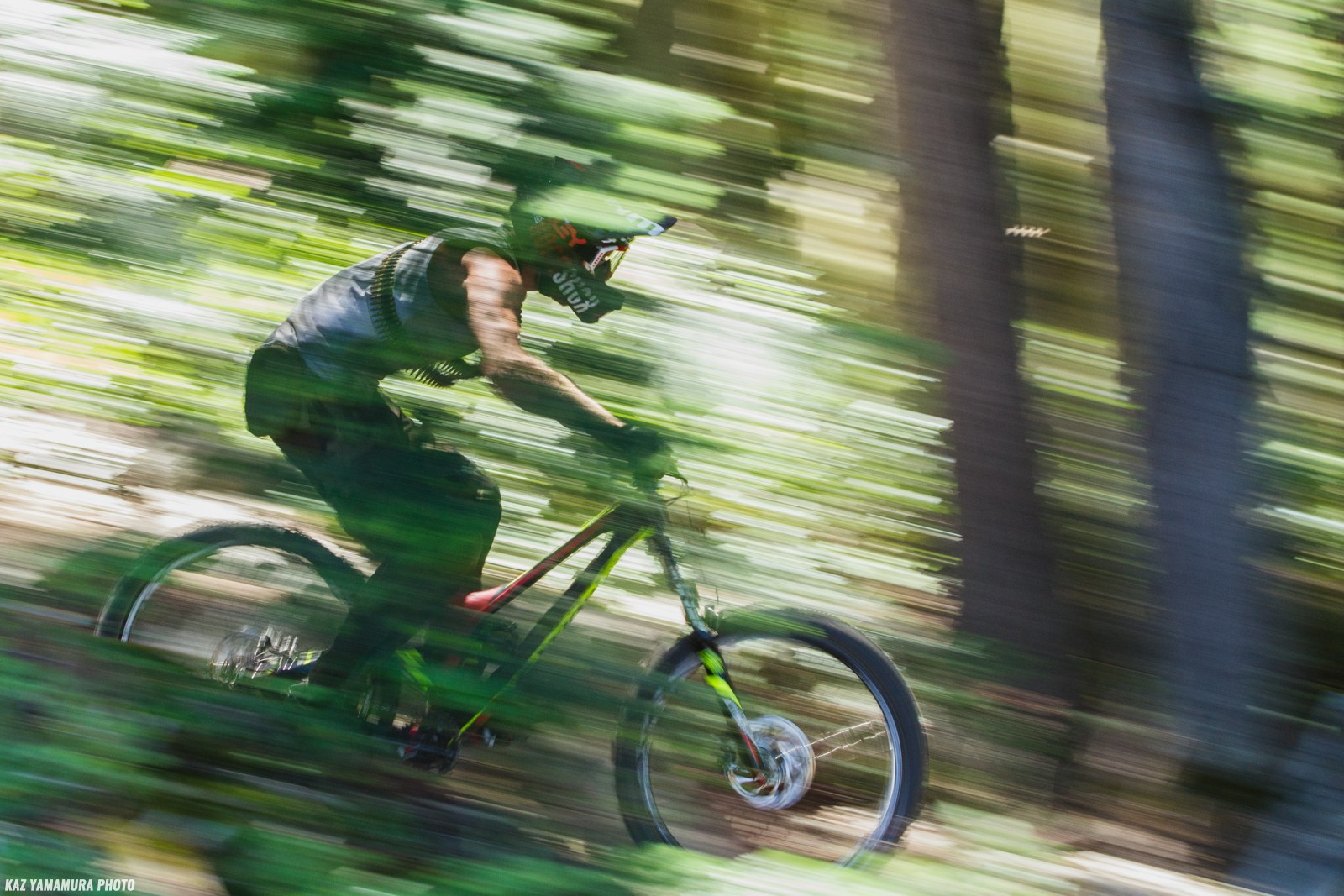 Another of Norbs from The Sickest Edit Ever. There was a bush between myself and Norbs, creating a bit of a matte look on him. 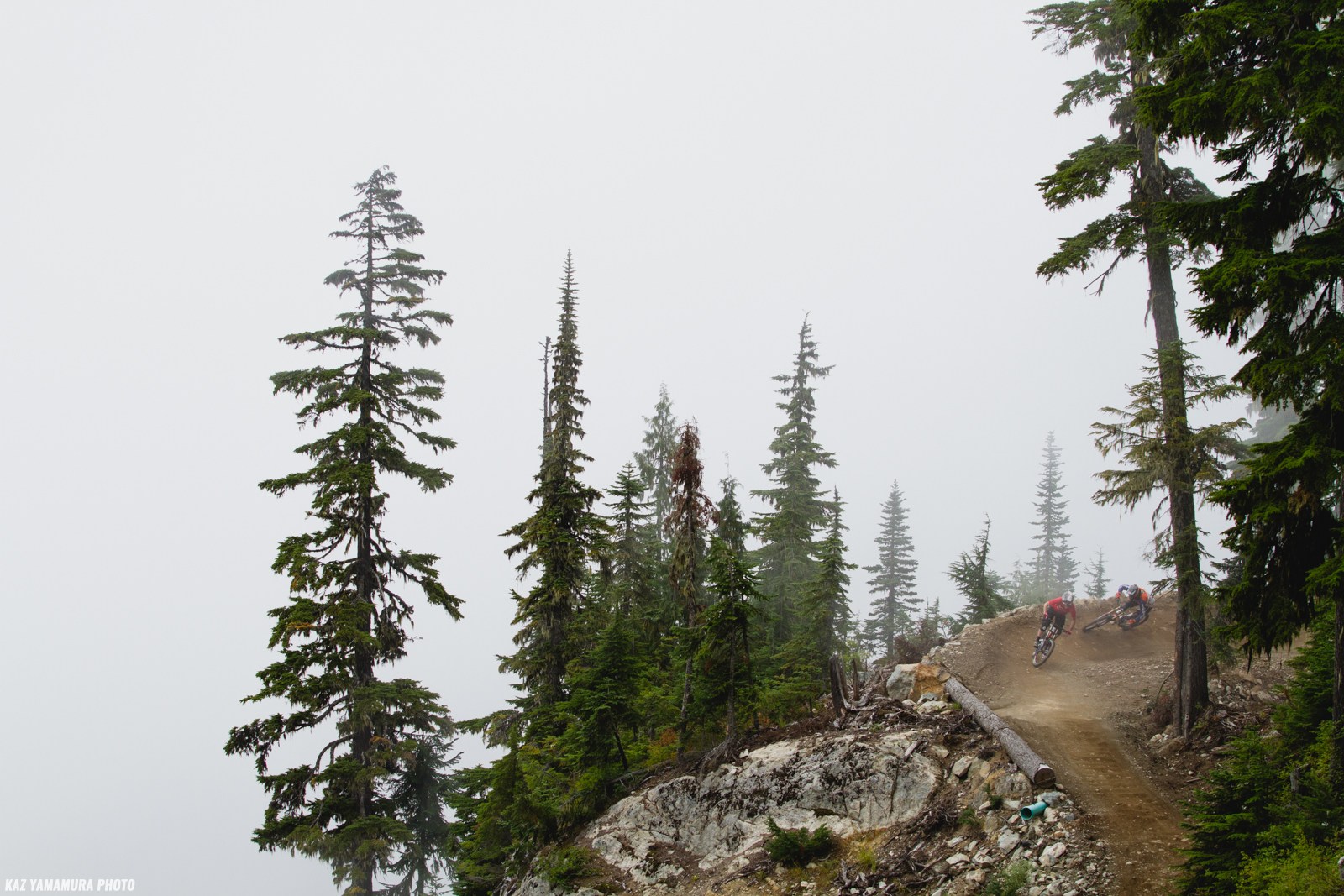 Tim Coleman and Mike Wallace for their dual Santa Cruz V10 review. I really like how the fog makes it seem as if they are on the edge of a cliff, while in reality they are safe in the hands of the Whistler Bike Park. 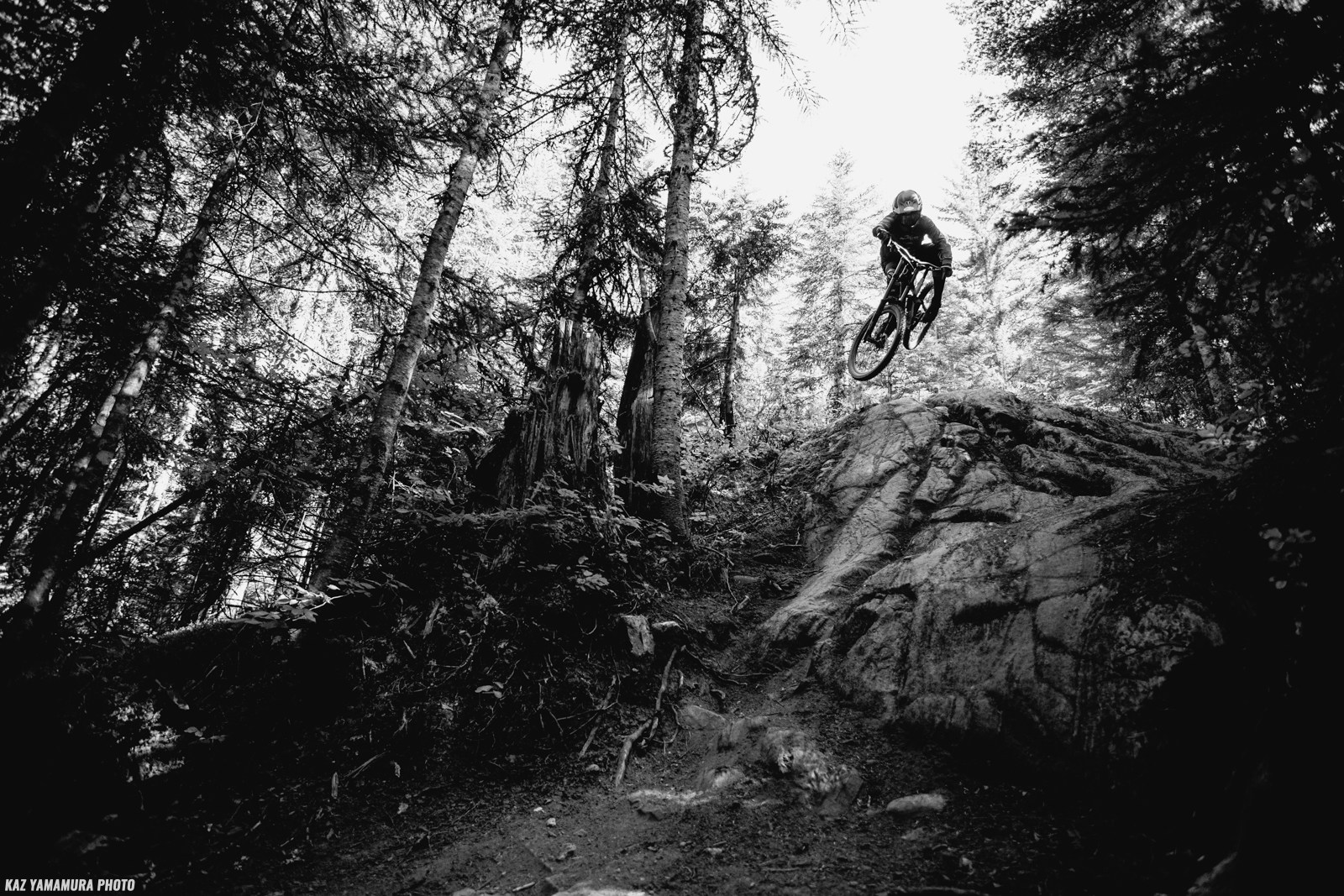 I shot with Bryn Atkinson for a bike check on his Norco Aurum, and it was a great pleasure. He’s a rad guy, with some rad moves, and not to mention speed. This one of him dropping into BC’s on Creekside in Whistler is one of my all-time favourites. 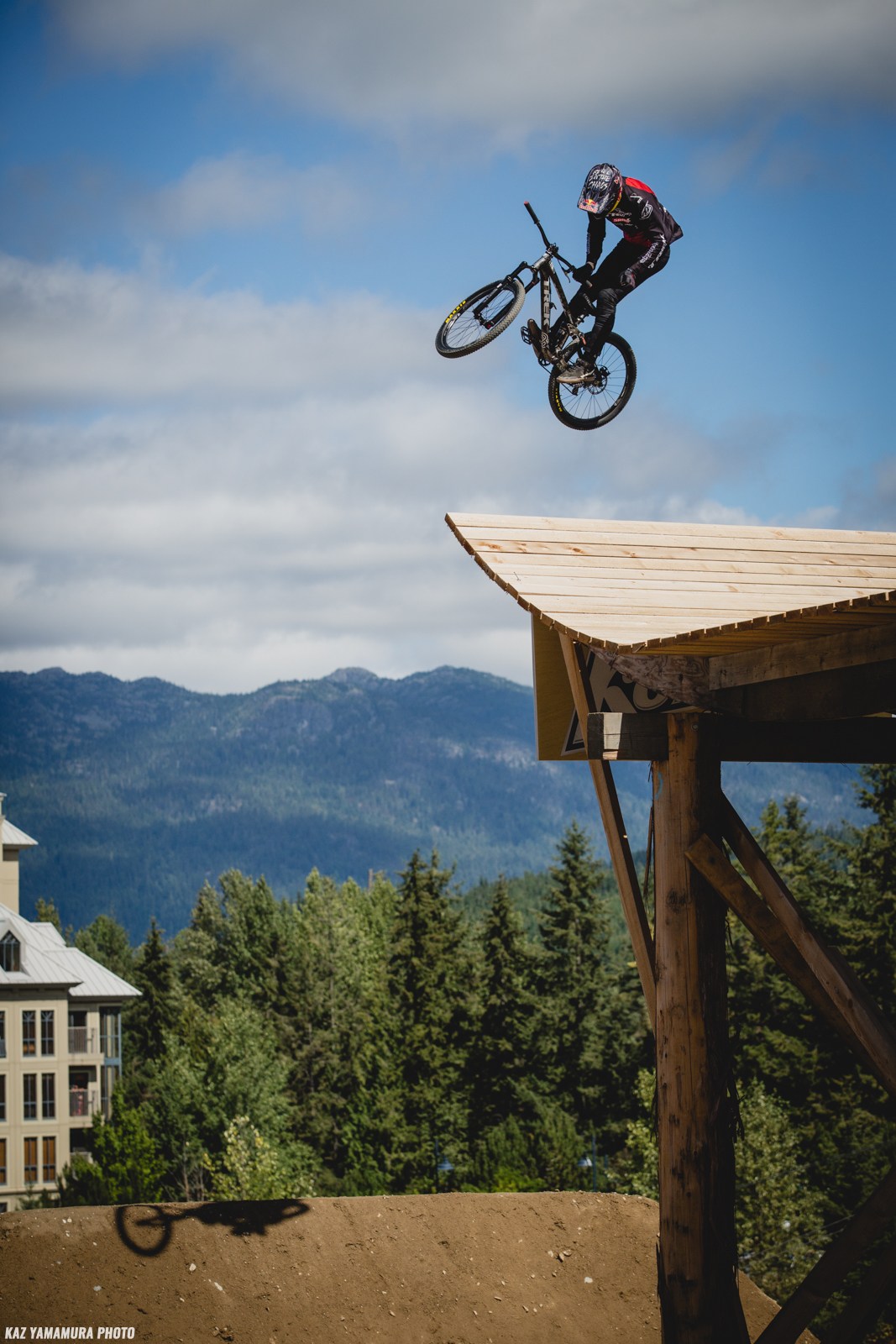 It’s hard to shoot Joyride, I’m almost never guaranteed a clean shot without any fencing, advertisement or spectators in it. I think I got it with this one though, while ticking all the boxes for an average photo – rider separated from background by sky, rule of thirds, and getting the take-off and landing in the shot. Too bad I wasn’t down here for his winning run with the cork 720 though… 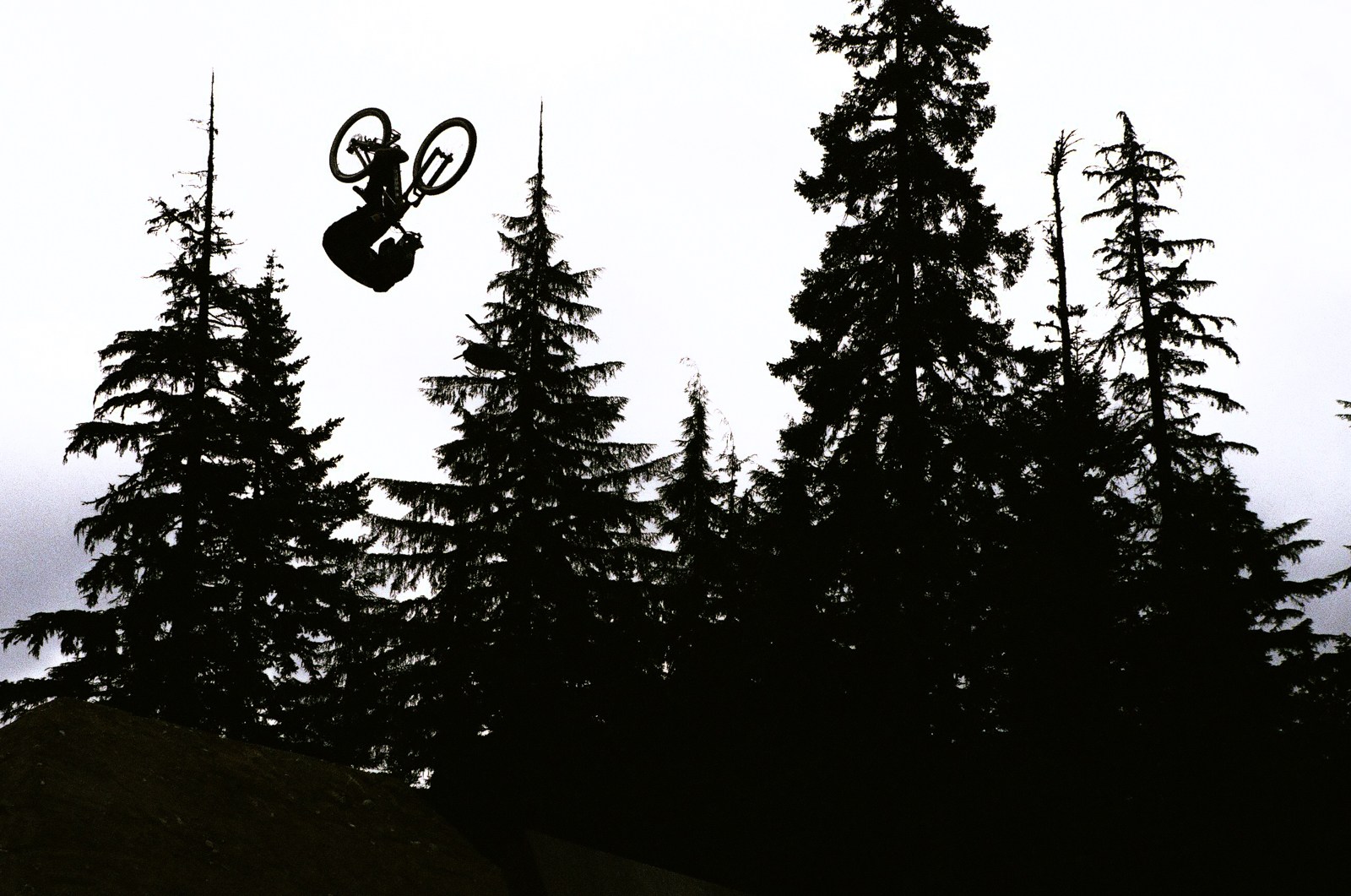 I started shooting film this year, after I got my parent’s Canon Rebel fixed. It’s a great camera – it has autofocus, auto-wind, and even accepts EF lenses – the same ones I use on my digital camera. Shooting film has helped my digital shooting as well, as I have to think about the framing more with the film camera – I’ve got to nail it, otherwise I’ve wasted an exposure, plus I won’t be able to see the shot for a few days. I shot a bit of Joyride on film, and didn’t get to see this shot of Brett Rheeder until about 3 weeks after Joyride. 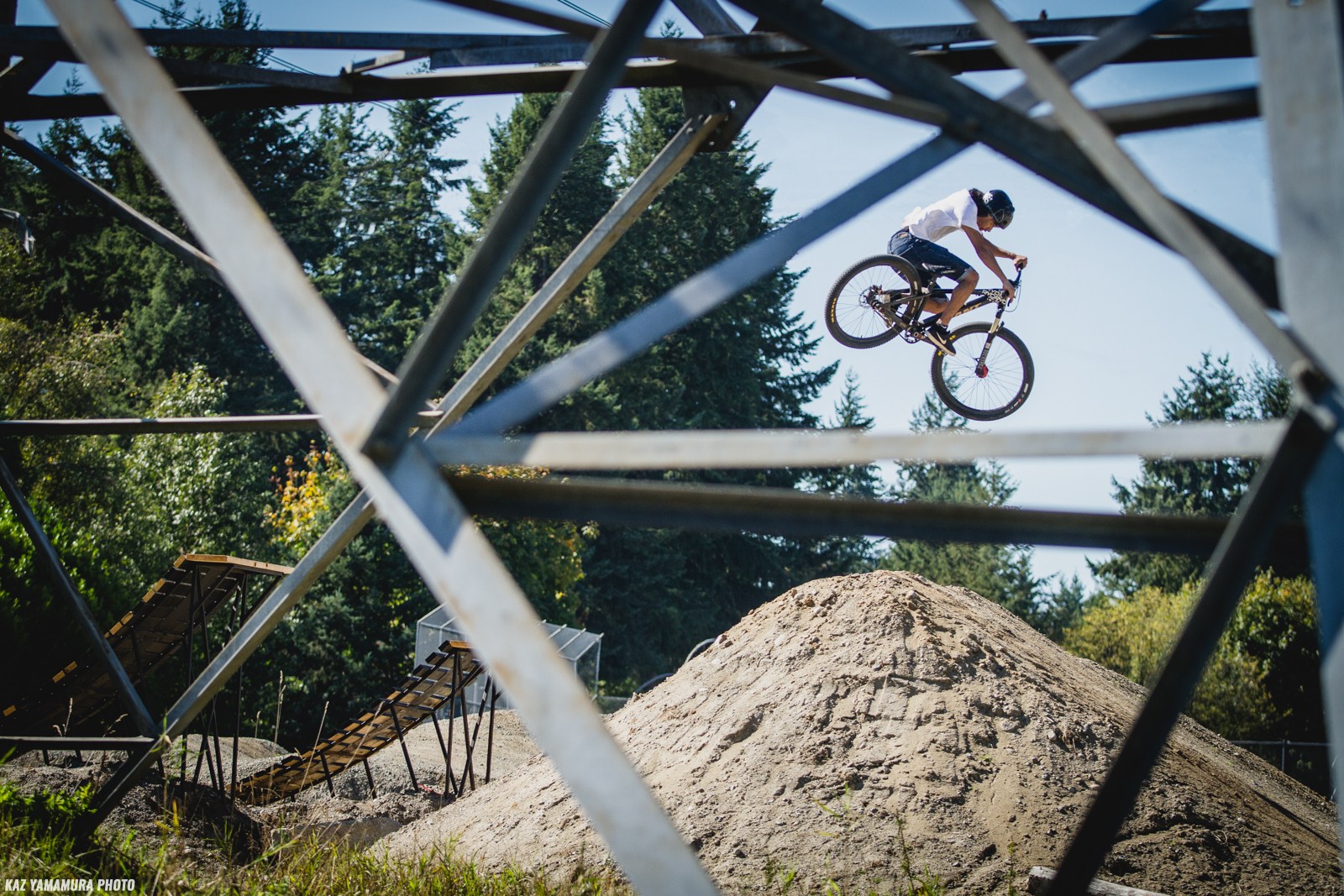 Mark Balcita is another young rider I’ve been shooting photos as well as a video with. This kid oozes style, whether he’s on a dirt jumper or a big bike. He also has the willingness to shoot one thing until I get the shot. In this case, it took us about 8 tries to get him framed perfectly within the triangle and against the sky – but he hiked up every time with no complaints. 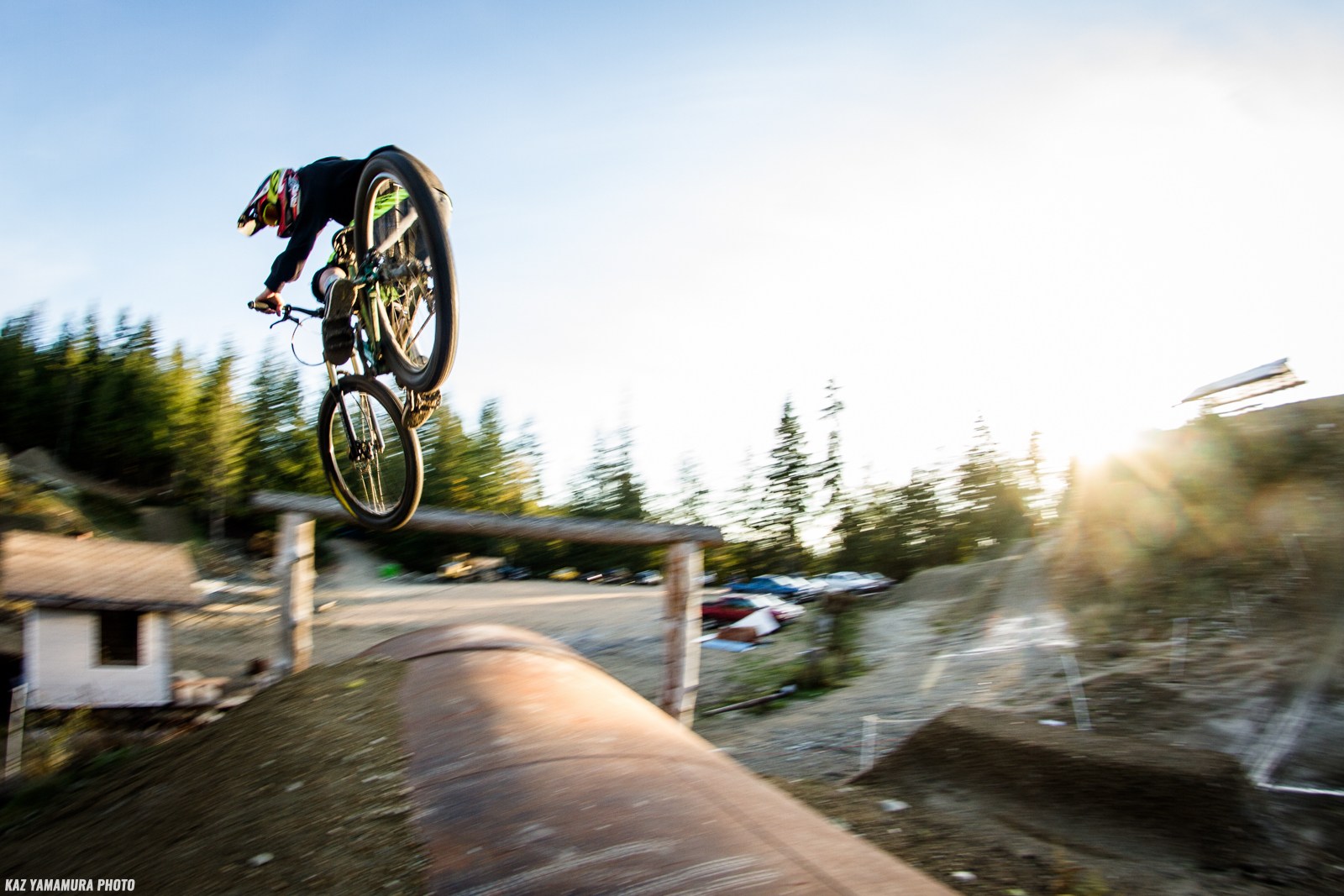 Another of Mark Balcita, this time at Coast Gravity Park. I wanted to shoot into the sun, so I had Mark whip towards me – not realizing he was doing them switch. It’s hard separating the rider from the background when shooting fisheye, but I realized one trick to do so is to pan with a slow shutter. I just wish this day wasn’t -2°C so I could have had some dust billowing up behind him. 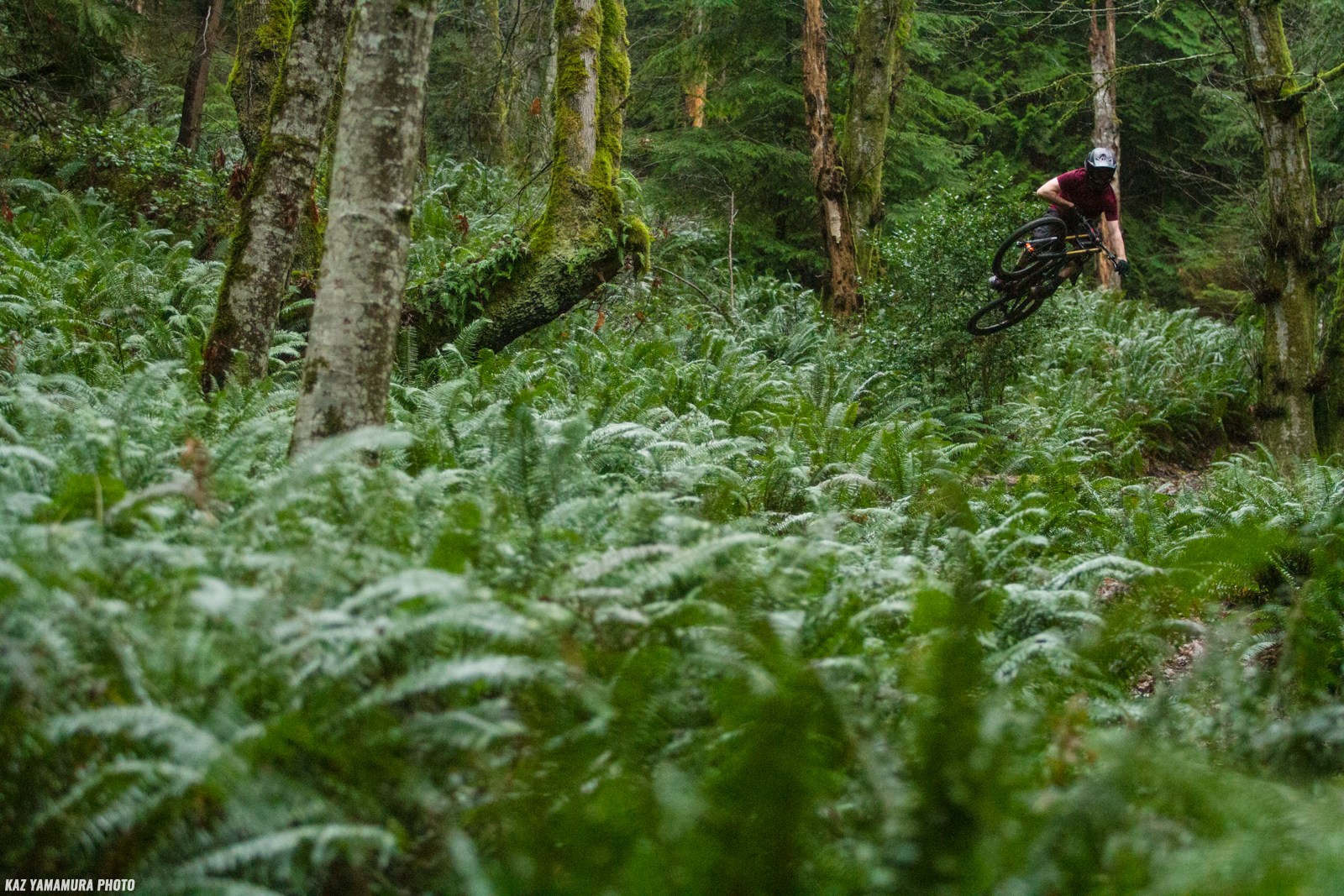 My last pick of 2015 is a shot with one of Bowen Island’s only riders. Along with Dangerous Dan, Jay Boysen is one of the only guys building on Bowen Island, let alone riding. As soon as he showed me this spot, I knew what kind of shot I wanted – Jay floating in the air, with the whole frame filled with ferns. It does break the “show take-off and landing” rule, but rules are meant to be broken, right?

Which one of these tickled your fancy? Or do you think Kaz left out a few bangers?