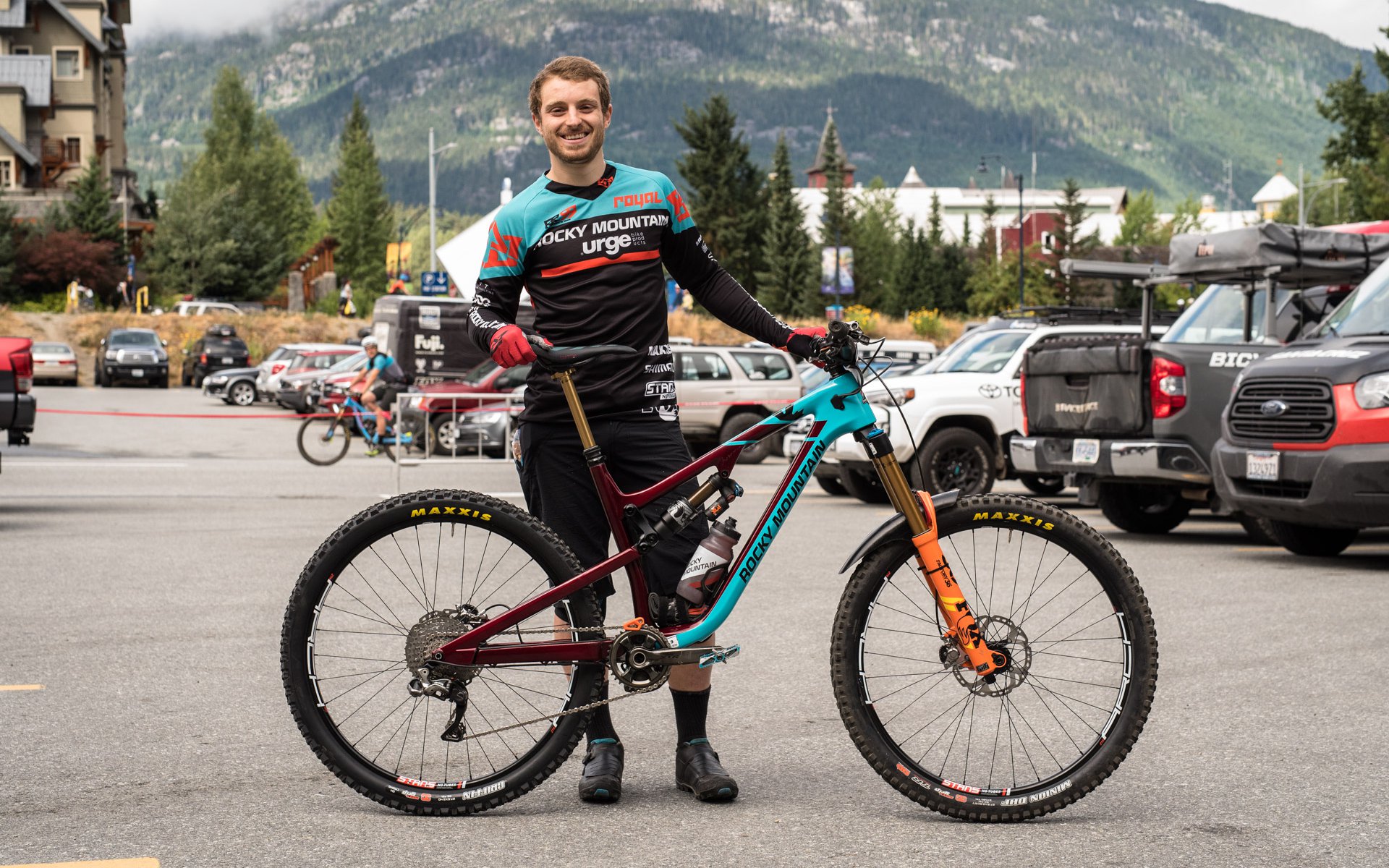 We didn't plan to shoot the winning bike. And we didn't wrestle for it after the race. This was mostly luck. Dave Smith and I spent a couple of days shadowing Jeff Bryson who is Jesse and Remi Gauvin's mechanic.

During that process we noticed some interesting differences between Jesse and Remi's bikes. Identical frames and sponsors but different choices for drivetrain, brakes and rear damper. Of course the smart money was on Jesse, but would you bet on an EWS round? We had our fingers crossed.

Anyway we have the winning bike. Jesse Melamed kicked fucking ass today. And so did Remi Gauvin. Here are both of their bikes. 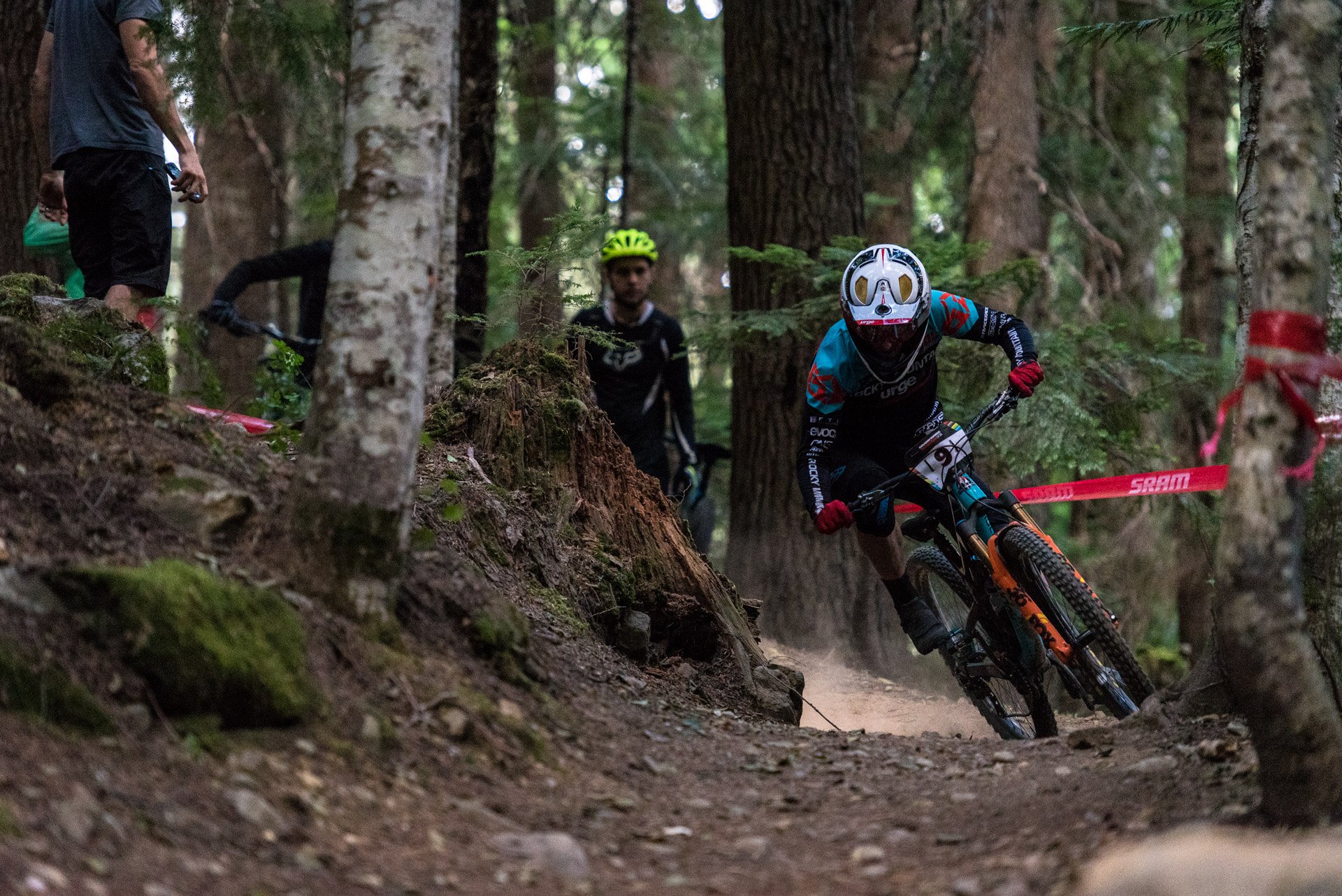 Jesse cruising to one of his most convincing victories of the day. He put 14 seconds into Sam Hill and the rest of the field on Howler, a trail that finishes right behind his house. 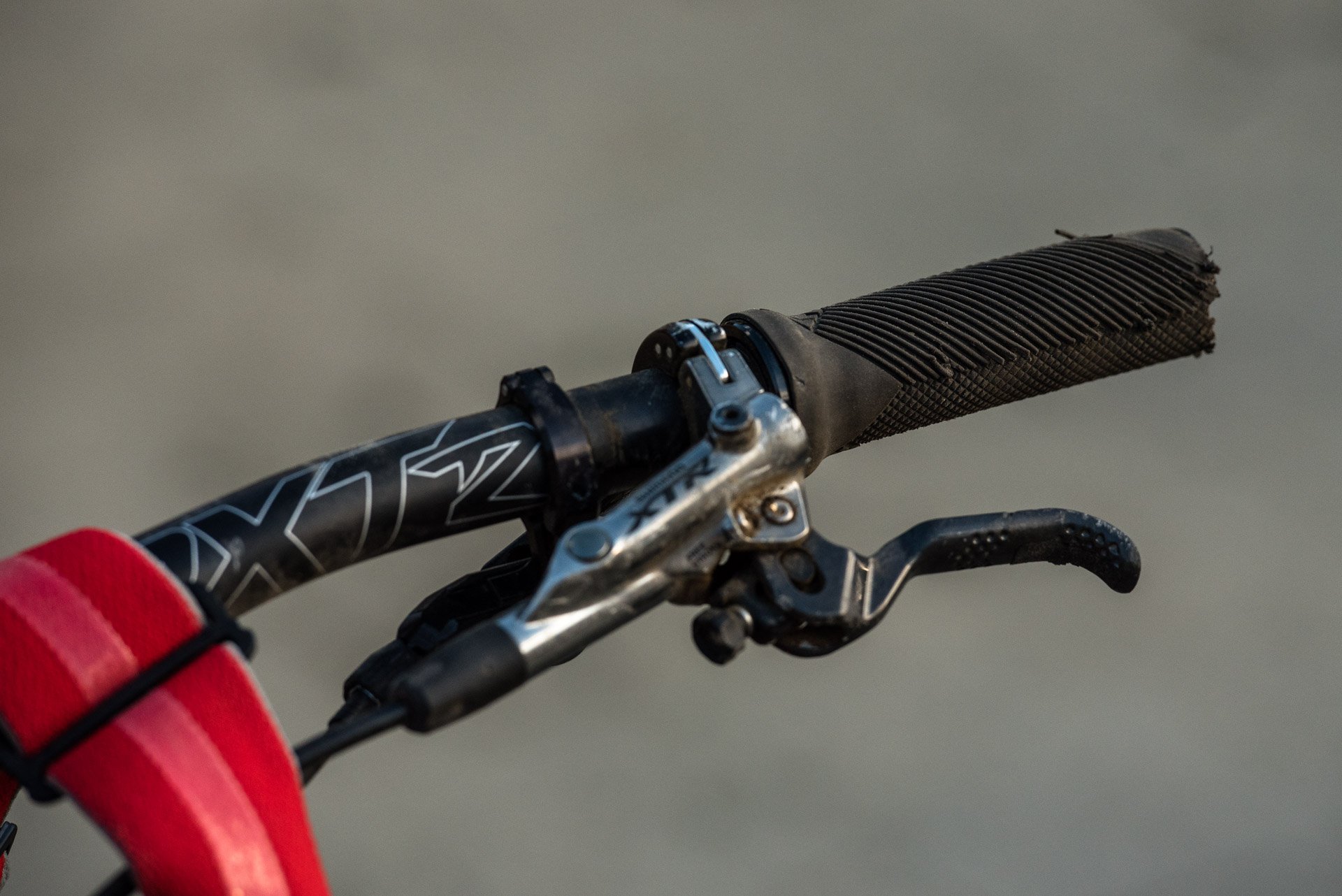 These are Jesse's brakes. Jesse rides XTR brakes because he weighs 148 lbs. Fewer in kilos. Divide by 2.2. 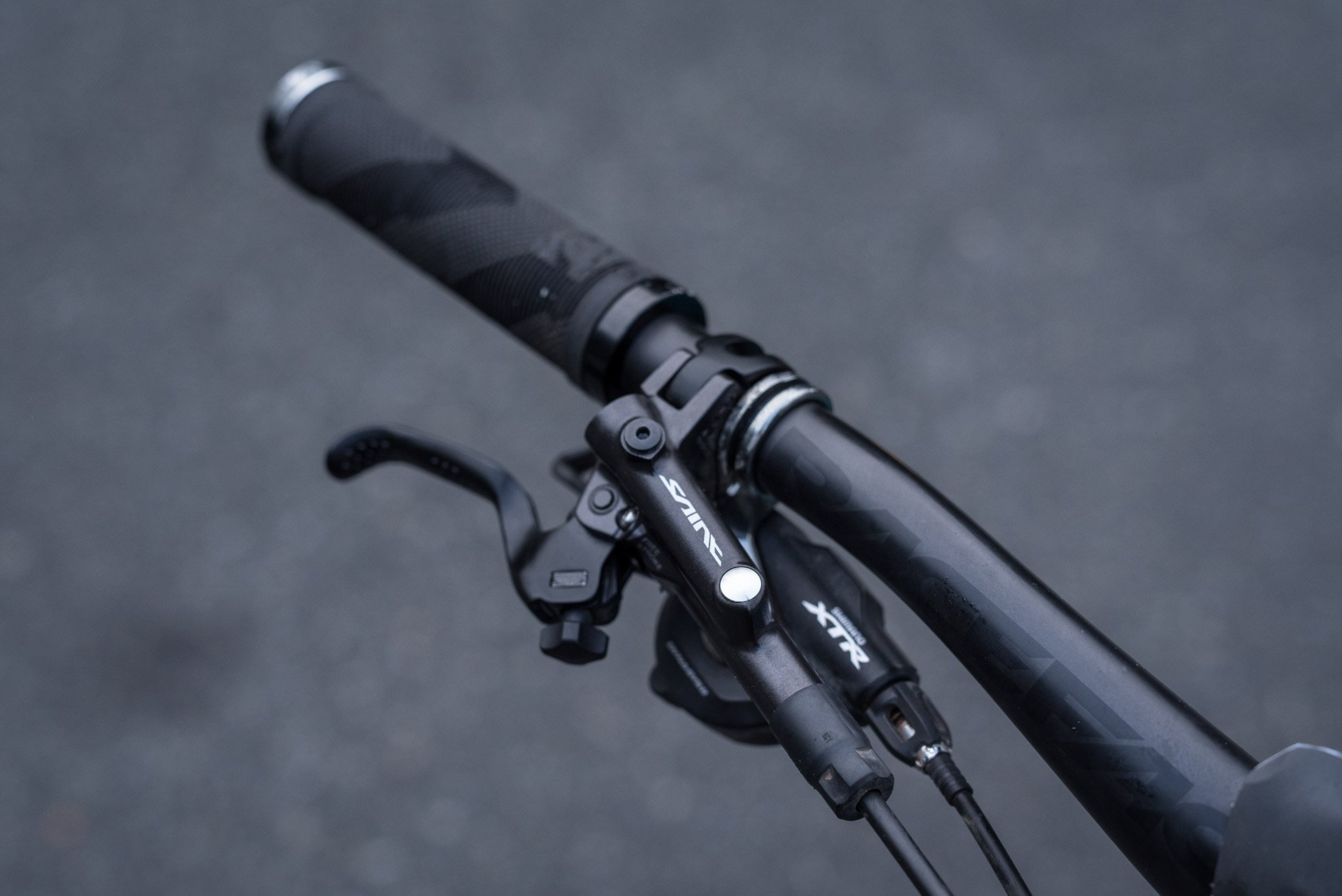 These are Remi's brakes. Saint brakes and a 200mm front rotor. Remi weighs 80 kilos. More in pounds. Multiply by 2.2. 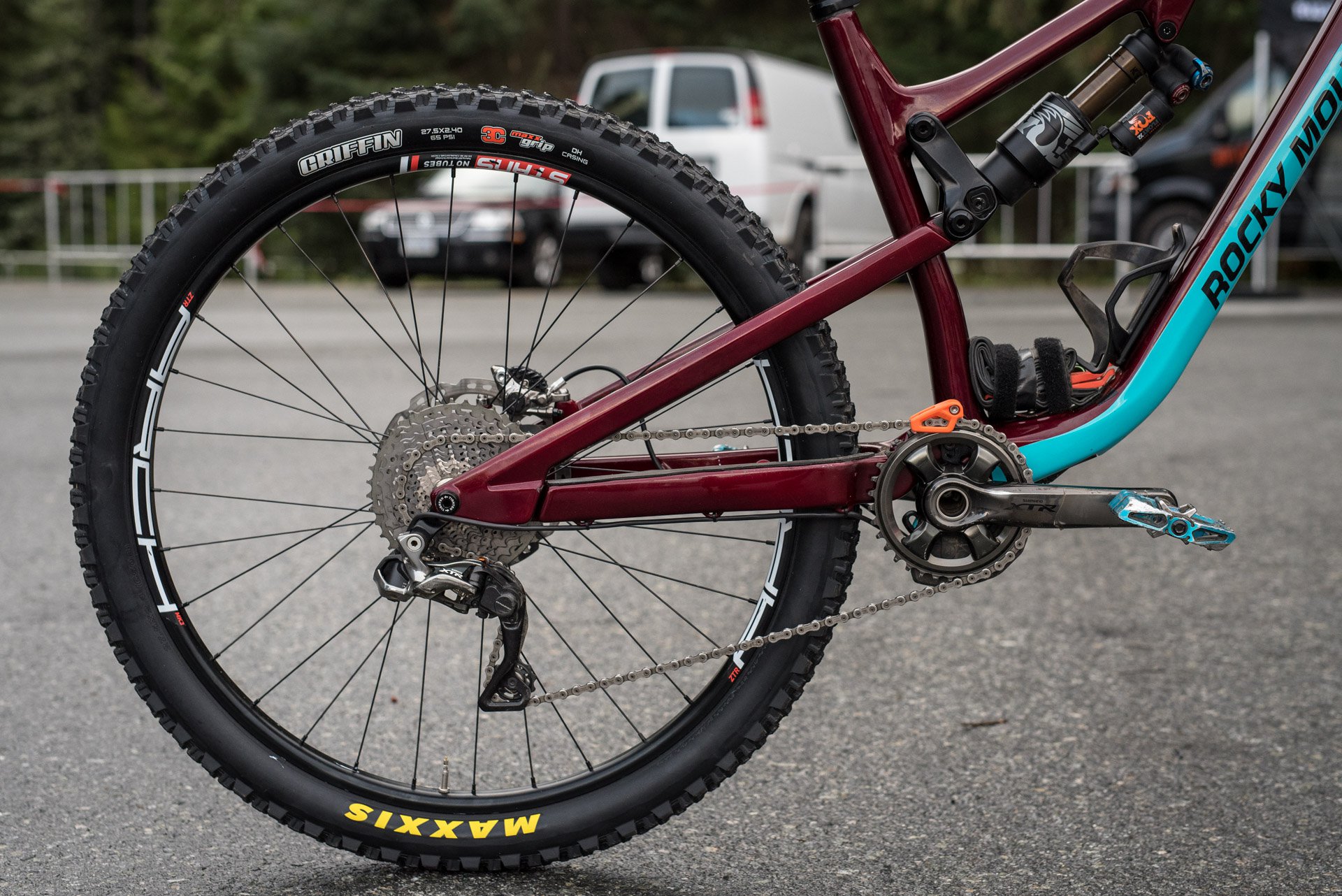 Jesse rides XTR Di2. Today he smashed it into a rock. The same rock he hit in practice. Jesse finished the stage without issue and didn't lose any time but it needed help on the support stage (from Jeff Bryson) and safe mode didn't engage as it should have. Good news and bad news. 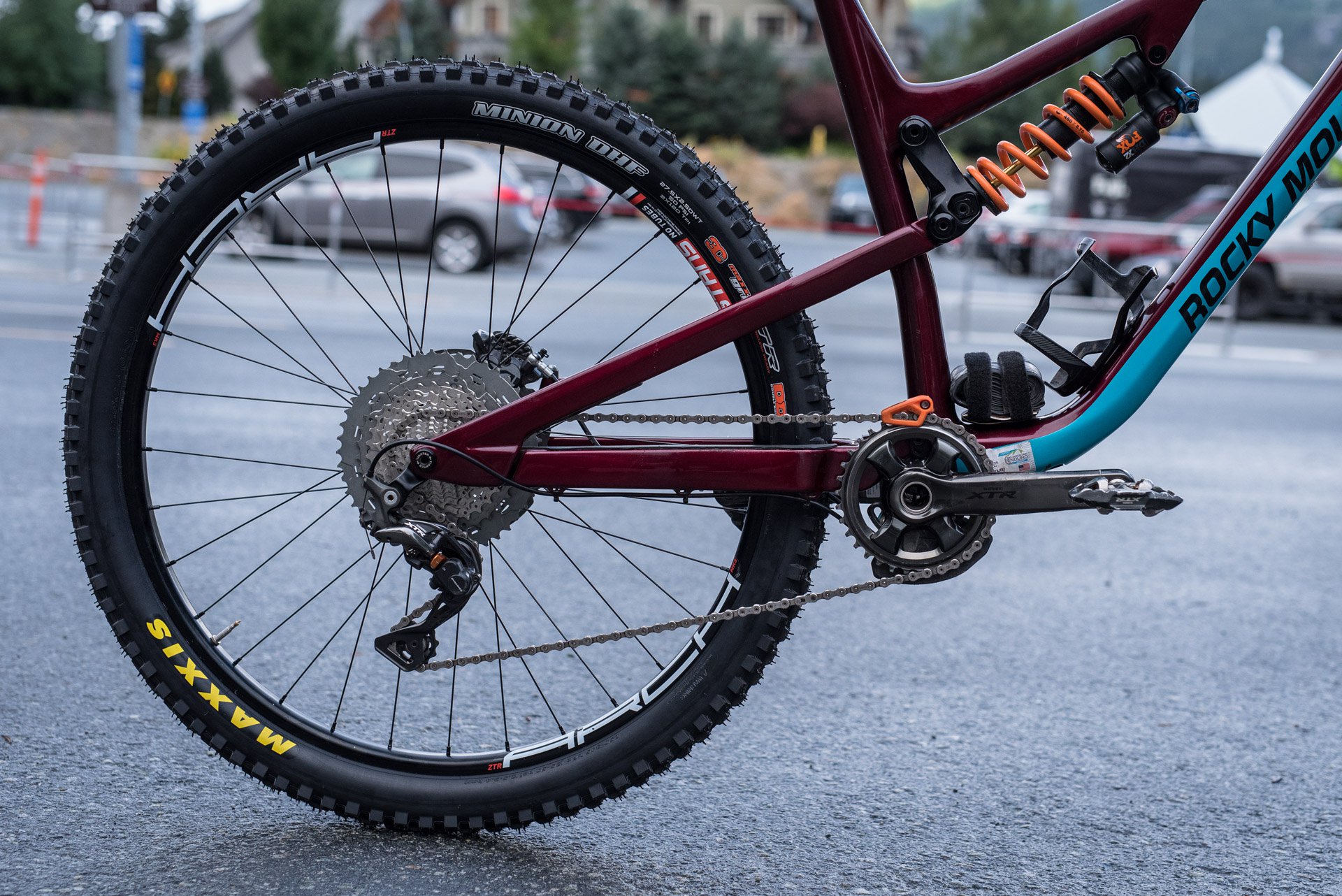 Remi rides cable-actuated XTR. Remi and Jesse are very particular and they ride what they feel best on. Sometimes it is more gut instinct than a specific trait exhibited by the components involved. 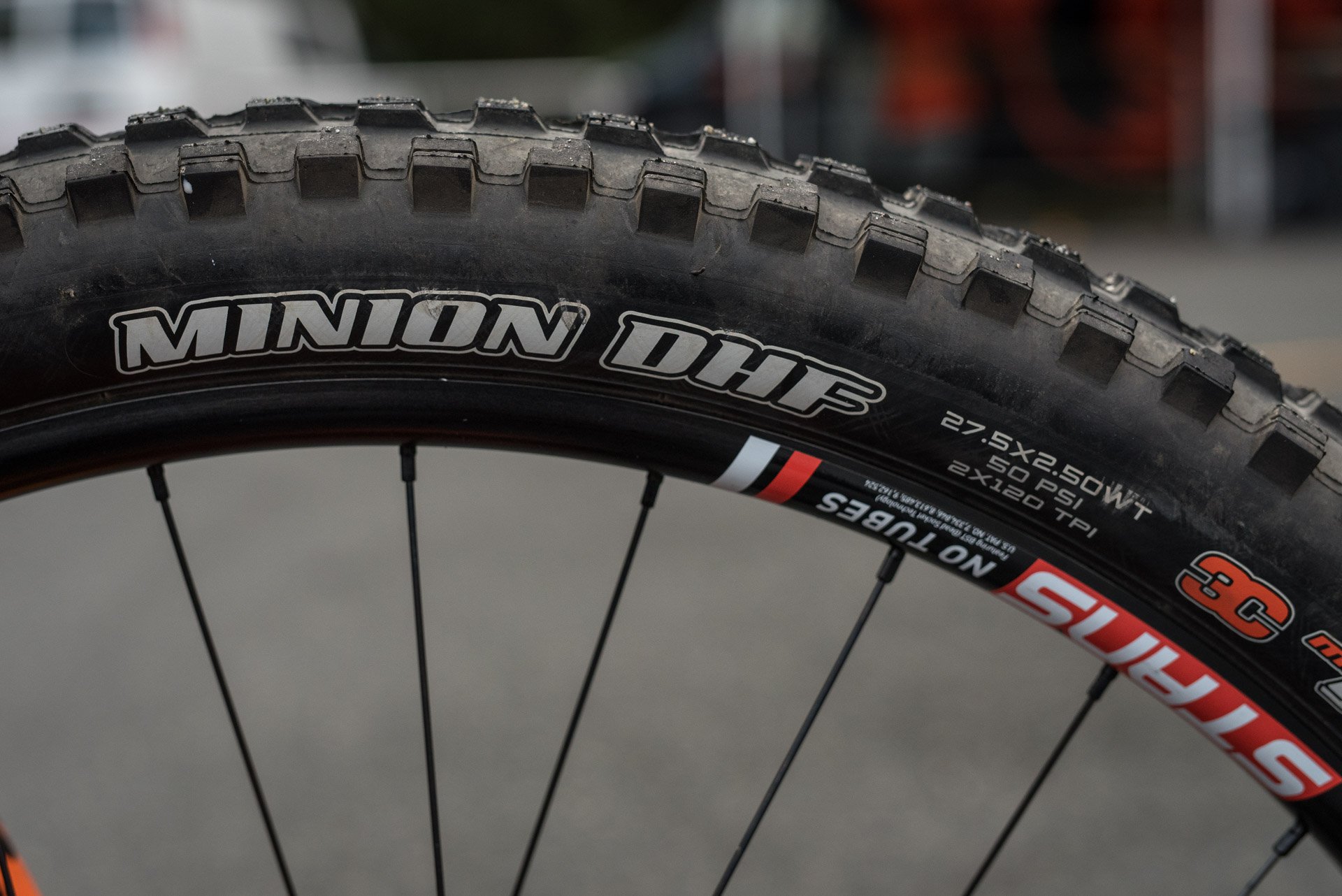 Both Jesse and Remi ride the Maxxis DHF Double Down in the front. But they ride very different pressures front and rear and different rear tires. After Jesse's catastrophic rim failure in Madeira both riders are on aluminium Stan's Arch hoops because they are less likely to conceal flaws. They have also added Cushcore to their wheels and neither rider flatted today. Curtis Keene flatted on Top of the World but Cushcore allowed him to ride all of Ride Don't Slide and finish the stage with his tire still attached and intact. 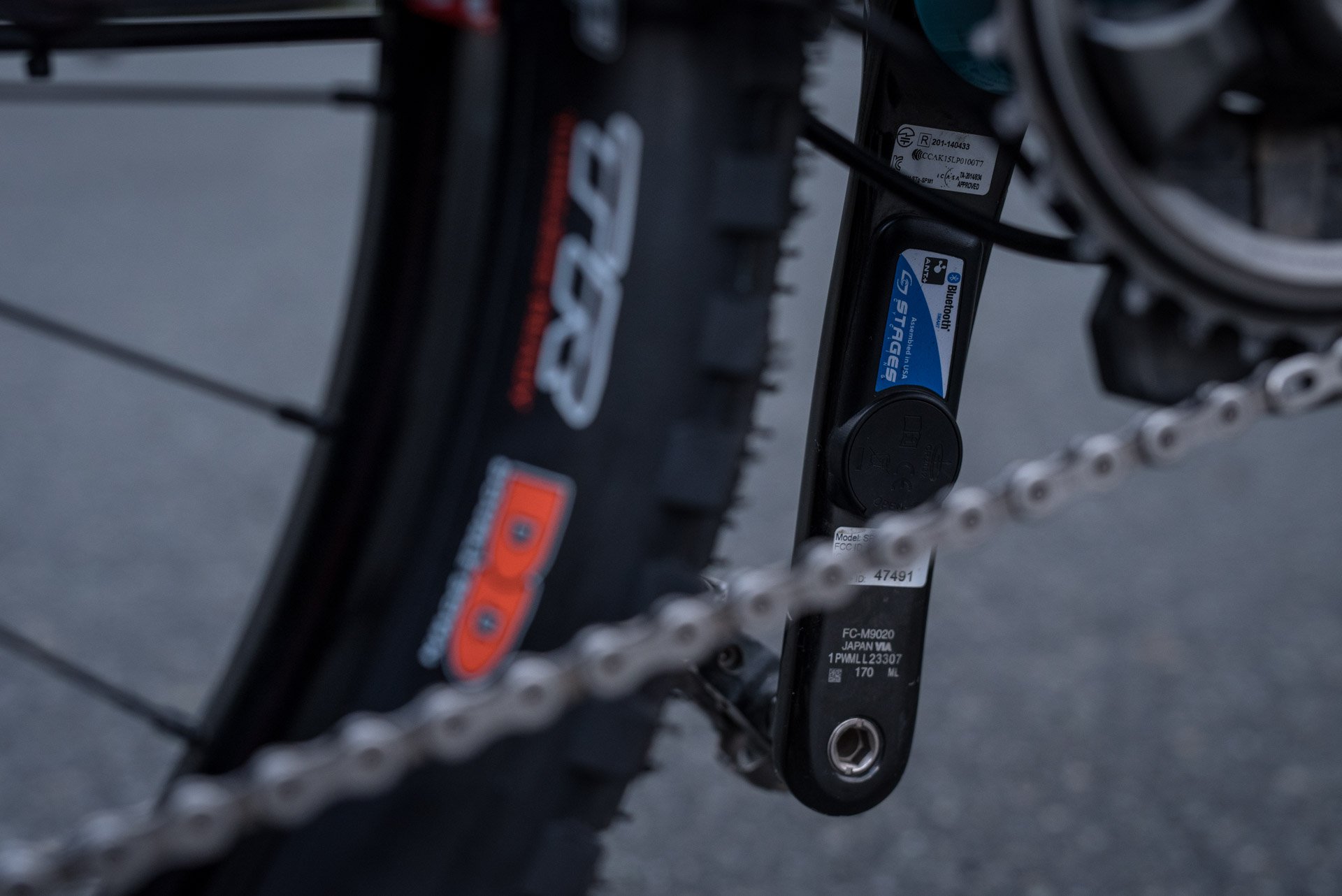 Both riders use the Stages Power meter. It is a meter that measures power. At the crank. 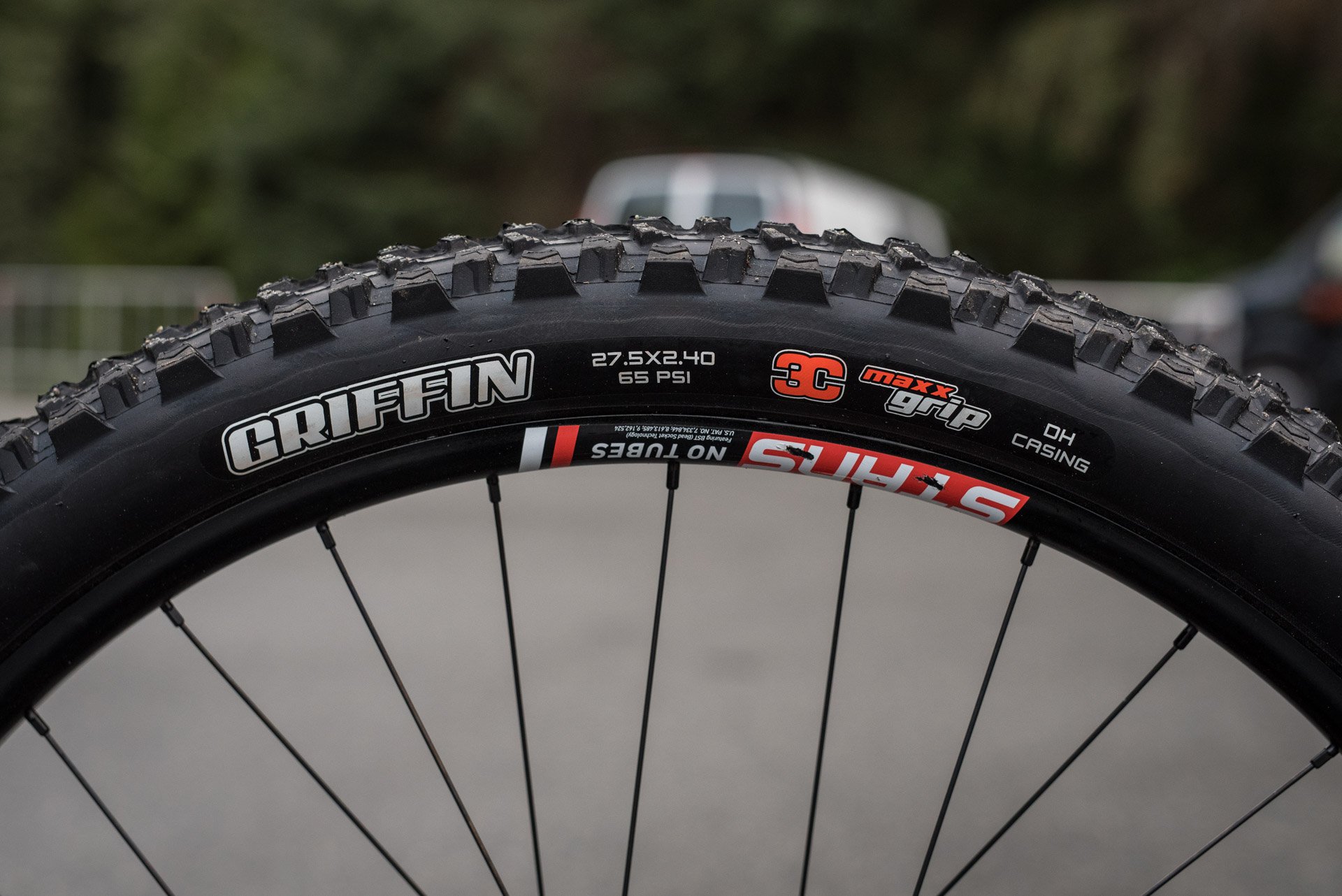 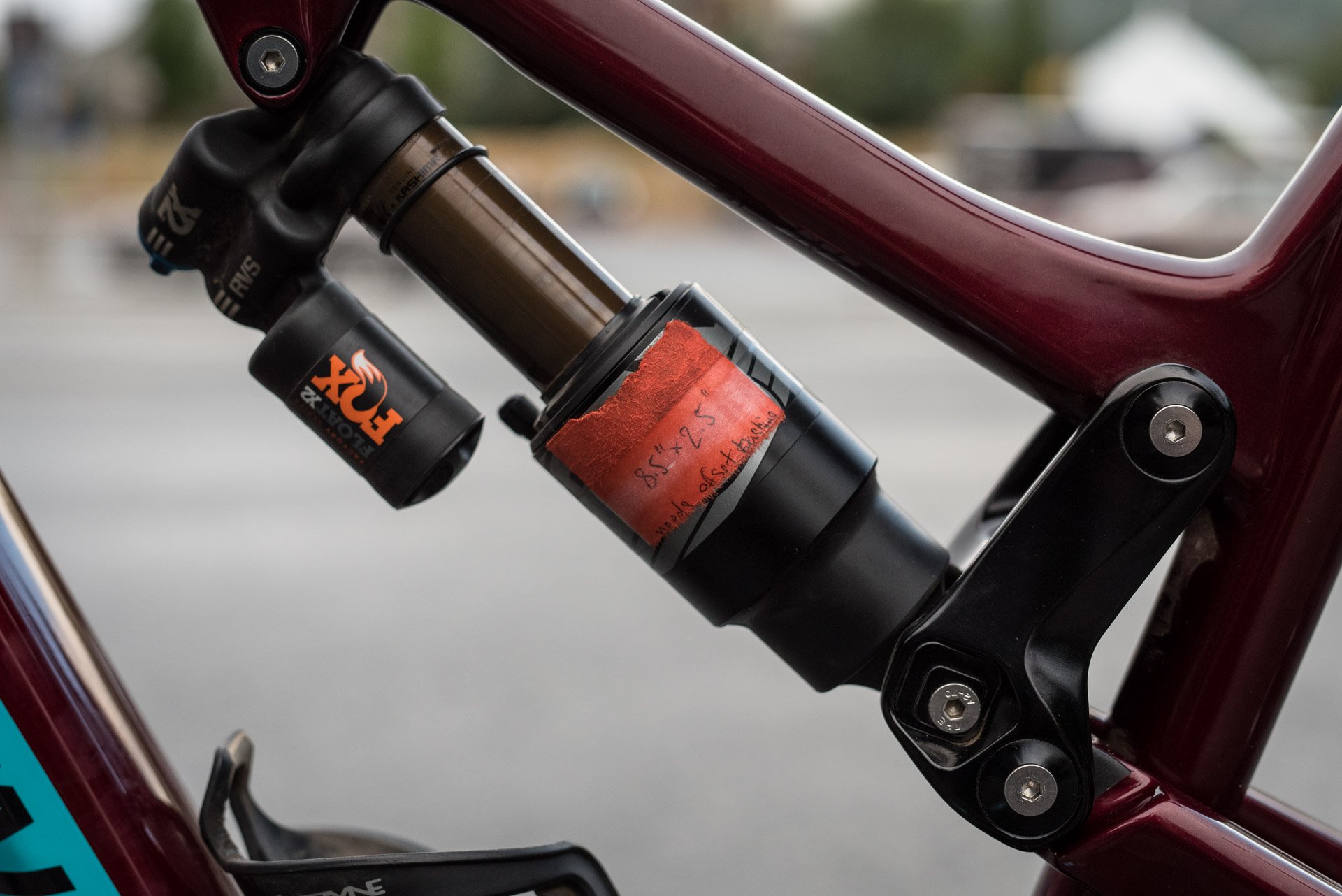 Jesse rides a Fox X2 RVS (Rod Valve System) I can't tell you anything about it. Remi and Jesse have custom eye-to-eye and stroke shocks to add a little travel. I'm not sure I'm supposed to tell you that. Pumped to 153 PSI. 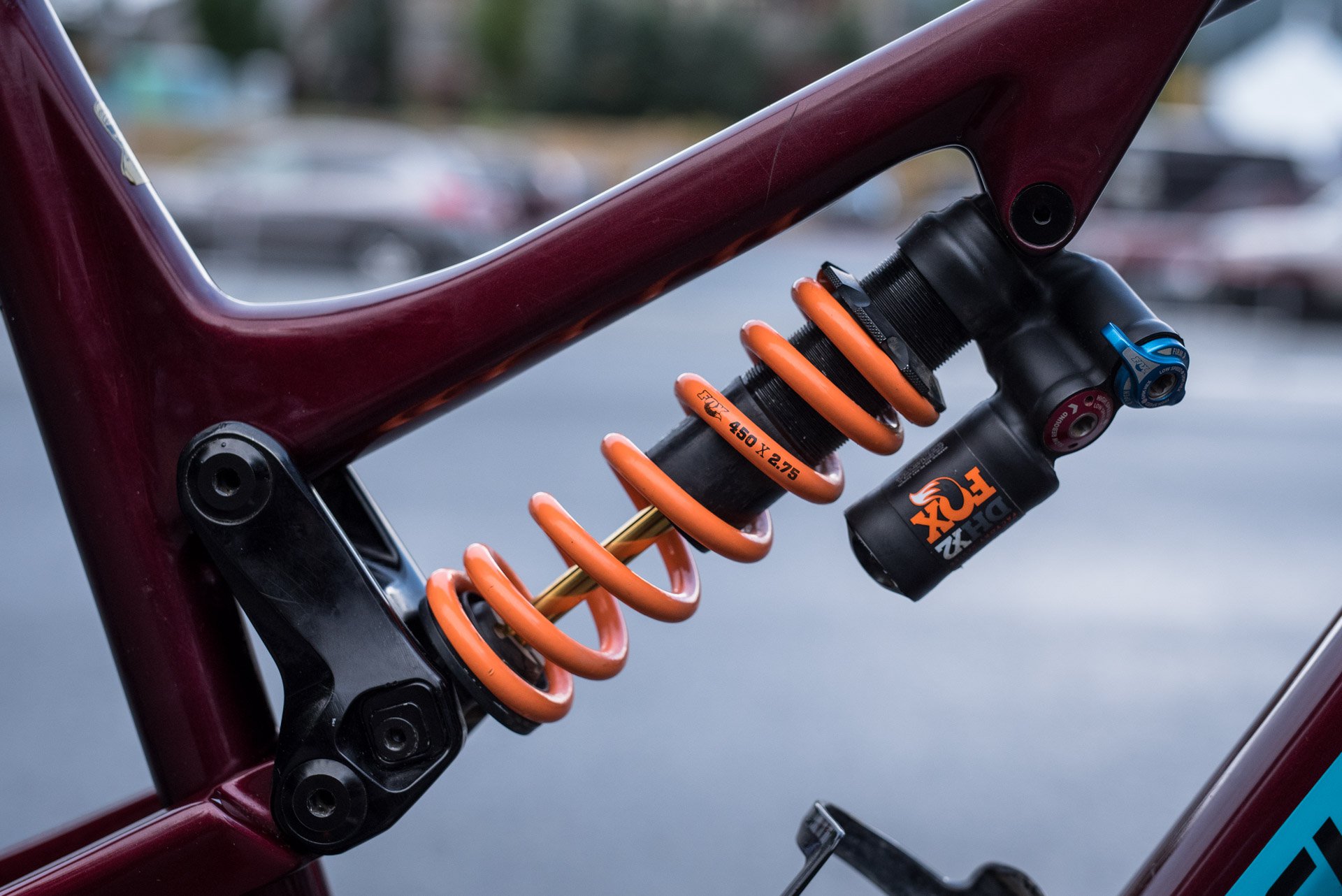 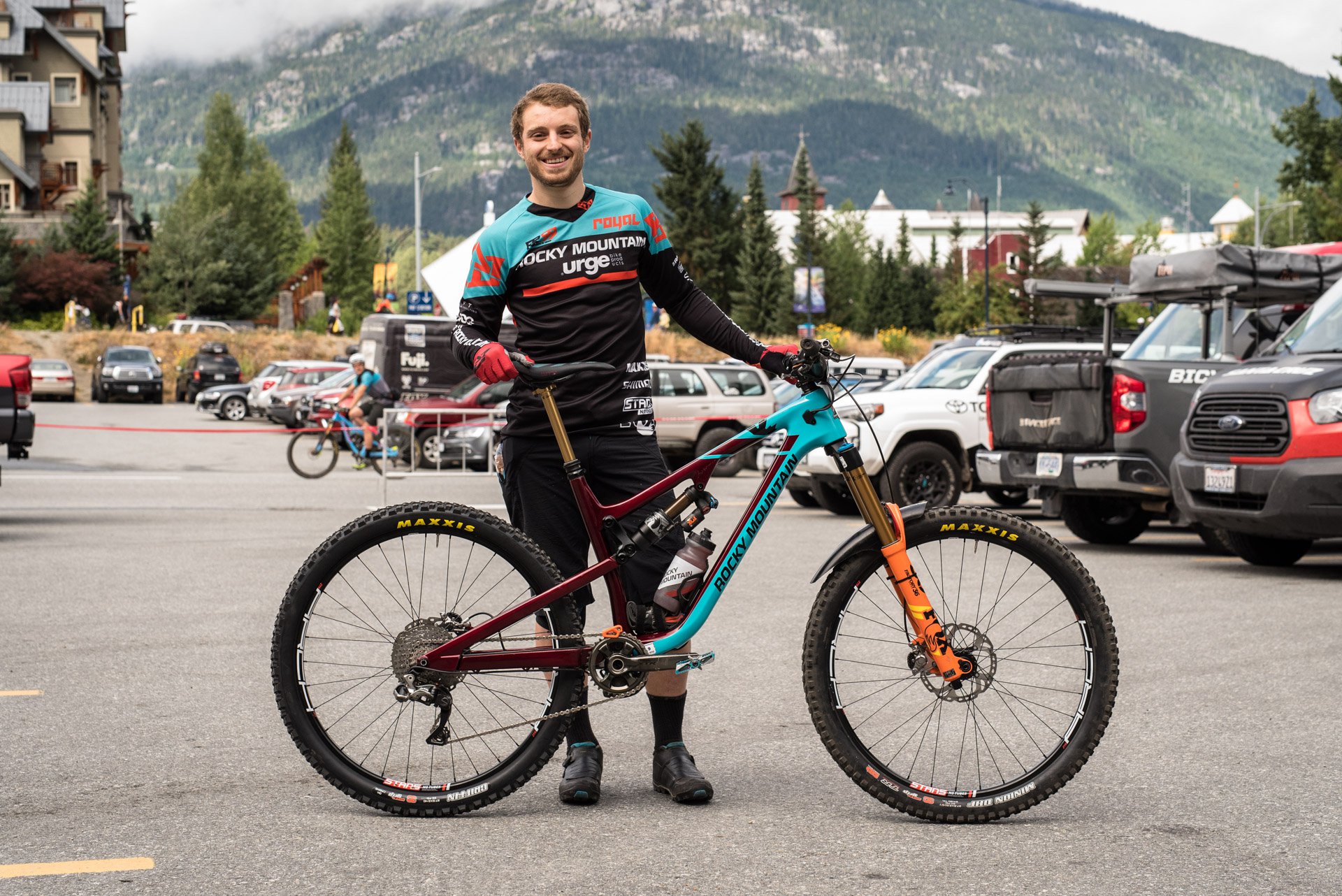 JMed sets 20 PSI front and rear with Cushcore liners. Before Cushcore he ran 24 front and 27 rear. 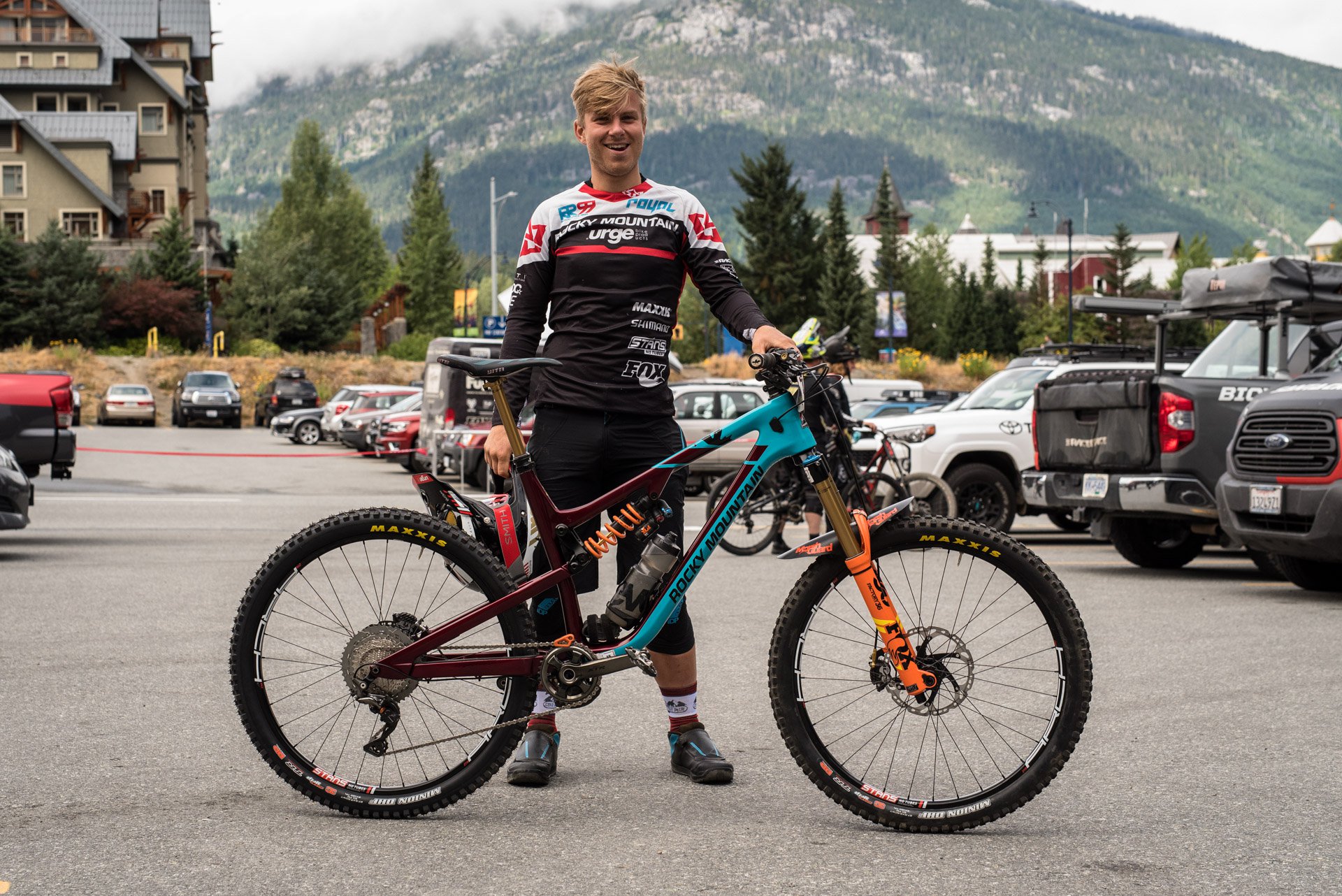 Remi also rides on Cushcore but with 24 PSI front and 27 PSI rear. Why does Jesse ride the same front and rear while Remi rides more in the rear? I haven't ridden the Griffin and didn't get a chance to ask Jesse about his pressures. 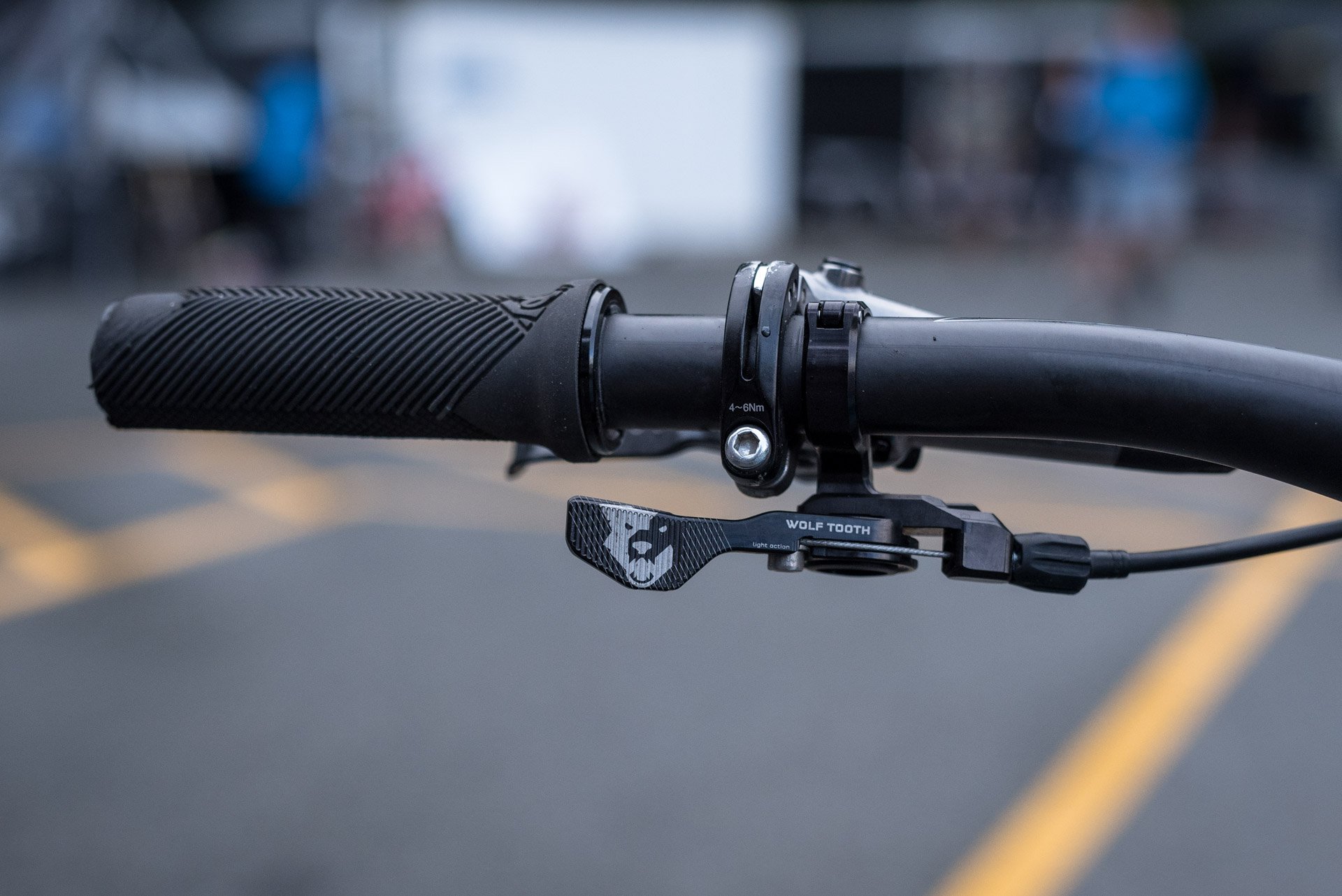 Both riders use the Fox Transfer Post but instead of the stock lever they use the Wolftooth model. The ReMote. Not the remote. 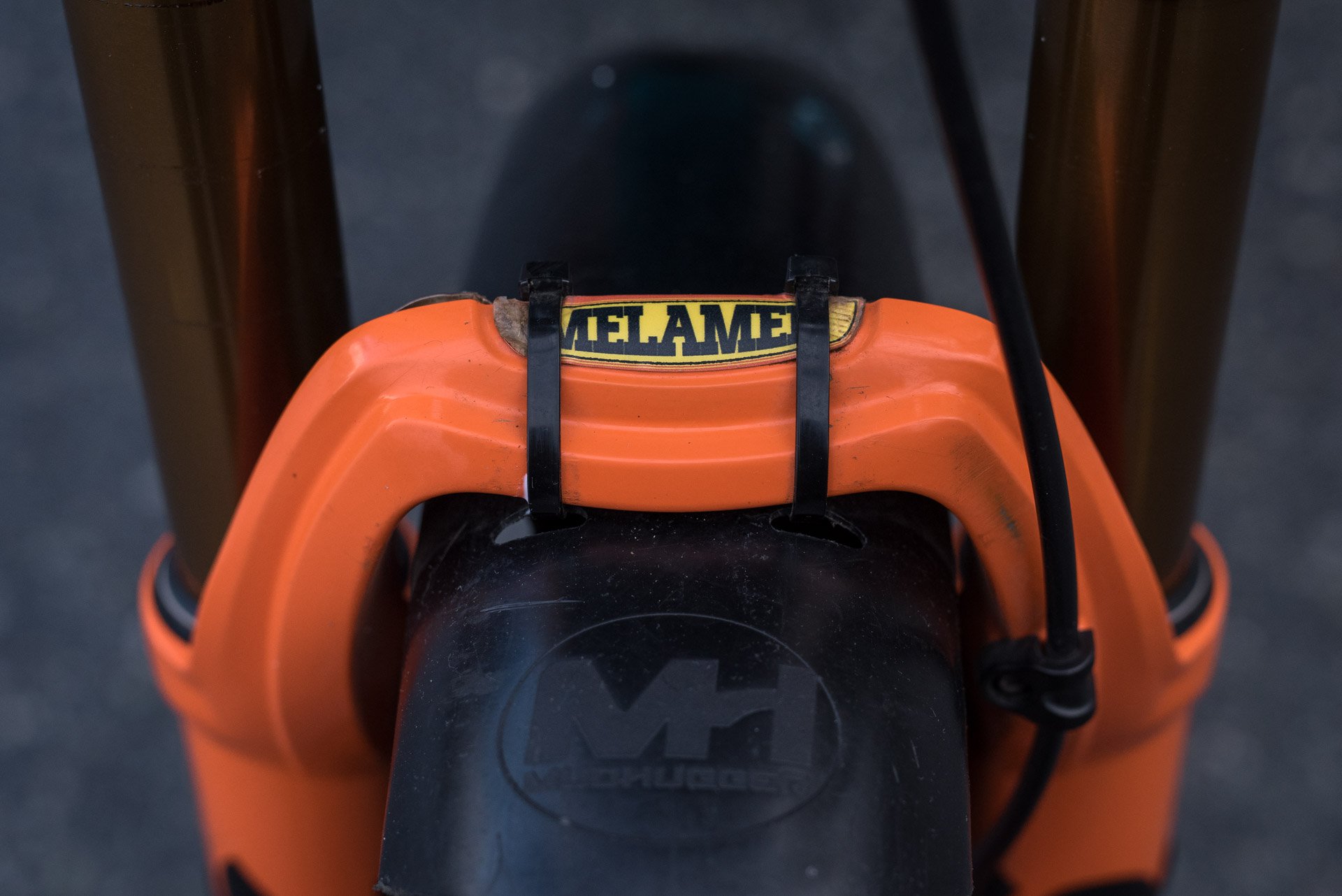 Jesse has a sticker on his fork. It's personalized and inflated to 74 PSI with two tokens. Remi doesn't have a sticker (yet) but his fork is filled with 76 PSI and 2.5 tokens. The fork is a Fox Float Factory but it's likely valving that the general public hasn't experienced yet.

Jesse came close to winning here in Whistler last year and only a smashed carbon rim spoiled his party in Madeira. Today it call came together.

Remi wasn't happy after the first three stages. His bike felt stiff. Jesse didn't say suck it up princess but he almost did. Pete from Fox told him his compression was off. So far off to be unrideable. So he fixed it. Or he was gaming him to get out of the funk. Remi fell on stage 4 and bent his brake lever but he was now smiling. Despite his lever (which he straightened so it was usable) the only person to beat Remi on stage 5 was Richie Rude (who resembles a fire breathing monster in person). Richie was only up 6 seconds after just shy of 8 minutes of racing. Remi rides better when he's angry.

The best way to watch an EWS round is by tailing a mechanic. TIL this. I also learned what a devastating, crushing, and beautiful beast an Enduro World Series race can be. The elation is meted out more sparingly than the devastating disappointment, making victory even more precious.

Thanks for the changes to the website so it's easy to read on a full sized monitor.

The most important detail to learn is that without a sticker you will lose.

Maybe with the tire inserts they've found they can save some weight there.

I've seen a certain person riding a new style Element, with a similar shock switch (different shock size, obviously). The new product line may have some room there for tinkering. I do the same with my '15 Trance, but that one's old news by now.

Do you think Remi gets good residuals because they used his likeness for the villain in The Incredibles? 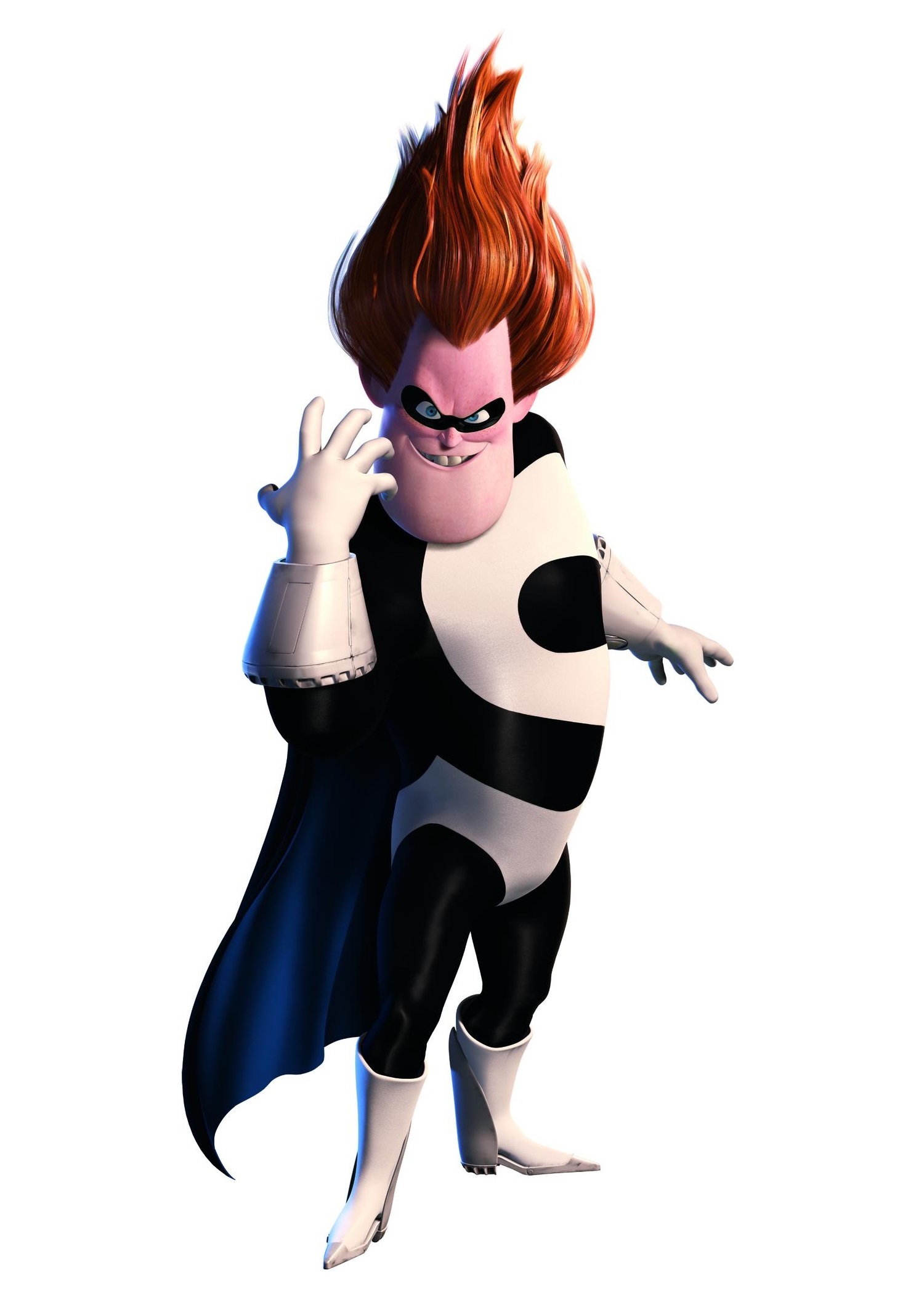 Cam, I'm loving the snark in your writing, it's a good read.

Awesome article!   I wonder why the DH casing on the tires and CushCore?  Think you could get away with lighter tires using the CushCore.

And congrats Jesse!  Watched the last stage live online and it was such a nail biter!

Thanks! Remi smashed up his wheel pretty good even with Cushcore. These guys do savage damage to wheels. Curtis Keene broke a brand new carbon rim while using Cushcore as did Jared Graves.

Wow!  Ive used a product called Tubliss on my KTM and its awesome.  Hopefully they do a MTB version.