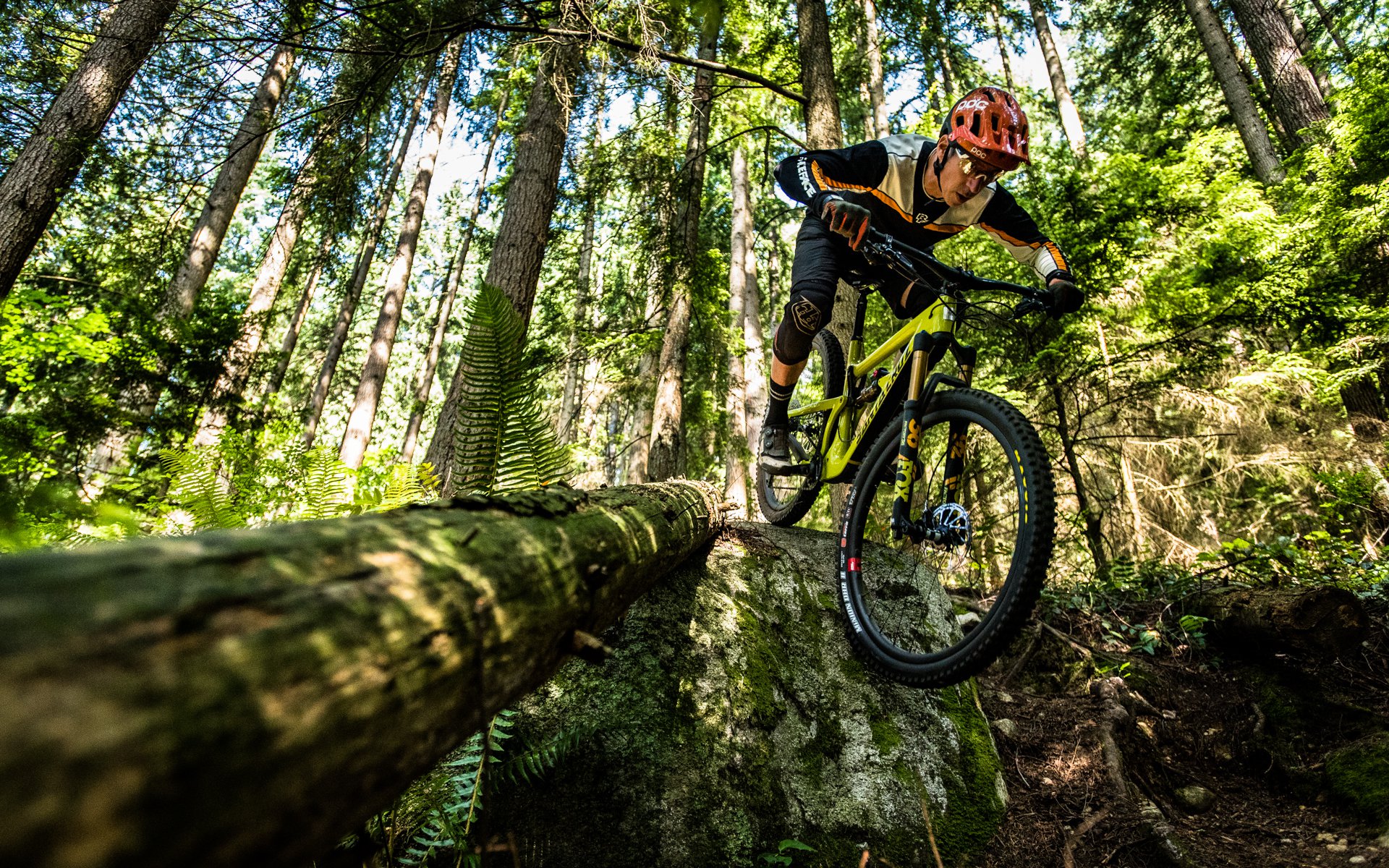 Your friend is dating a beautiful specimen who is either incredibly stupid, rude, pompous or possibly racist. Maybe all of the above. Faults big and small go unnoticed because of the beauty buzz. We all know someone who has succumbed to the blindness and we've likely been victims ourselves. I've had a mild case at the very least. There's nothing to do but wait it out and drop hints because until the beauty beam fades the object of affection could praise Hitler without your afflicted friend noticing. 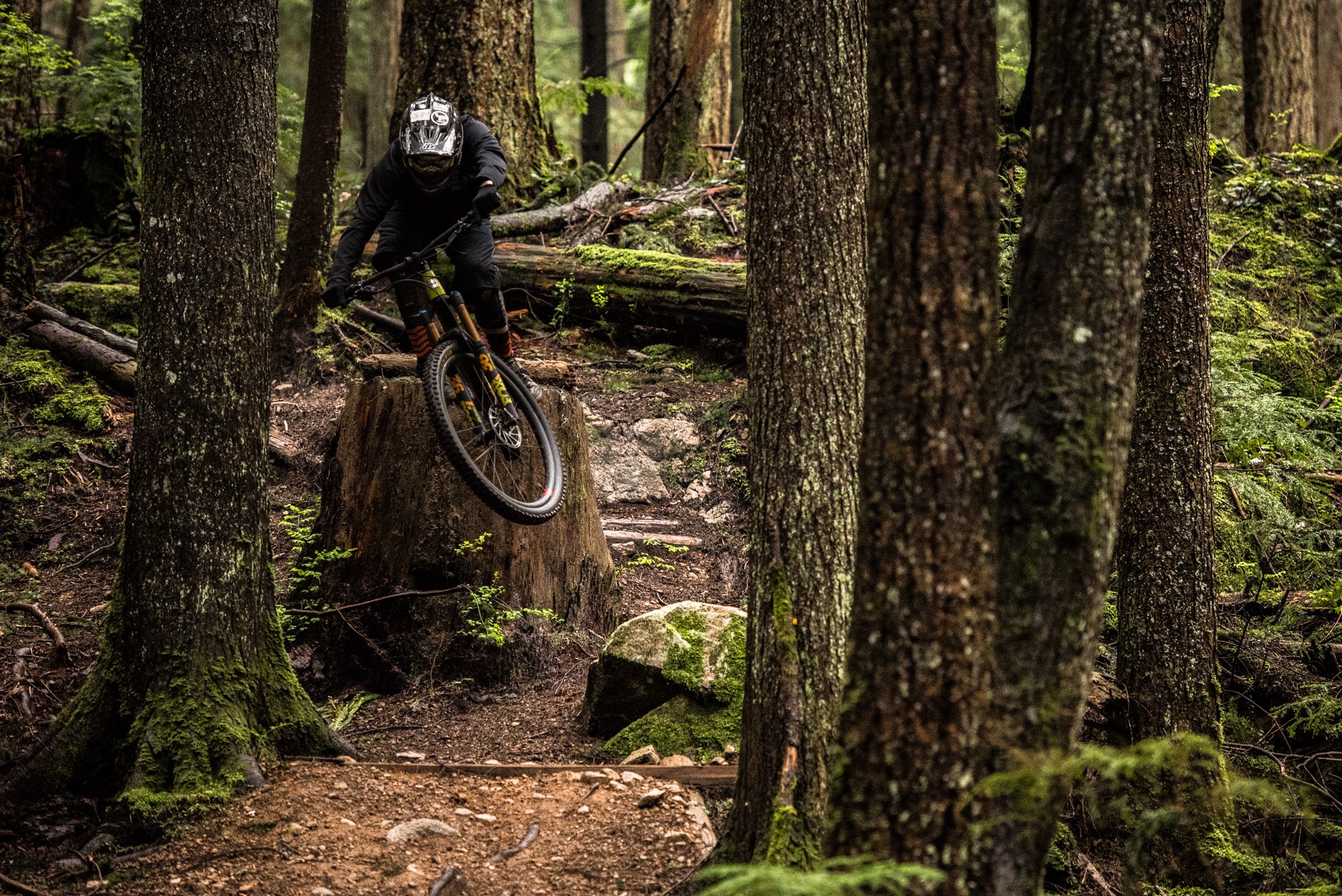 Seb Kemp has landed with his nose in the butter as the GM of Santa Cruz Canada so we put him to work for the lens of Dave Smith. And yes - he still shreds hard.

Bike reviewers are vulnerable to this same affliction, and it's possible I'm coming down with a case right now. I haven't been universally smitten with Santa Cruz's colour choices of late, and both Nomad shades were a miss for me, but the HTLT in gloss Wicklow Green hits the sweet spot. When the bike is nearby I can't help looking at it. I pull it off the ground by one grip and angle it for a better look, scrutinizing the details admiringly; I am bike blind. And the fact that this bike performs well, like the rude hottie who is great in the sack, may further obscure any flaws. In terms of proportion, these longer travel 29ers are starting to look just right to me as well but I'll do my best to see through the fog. 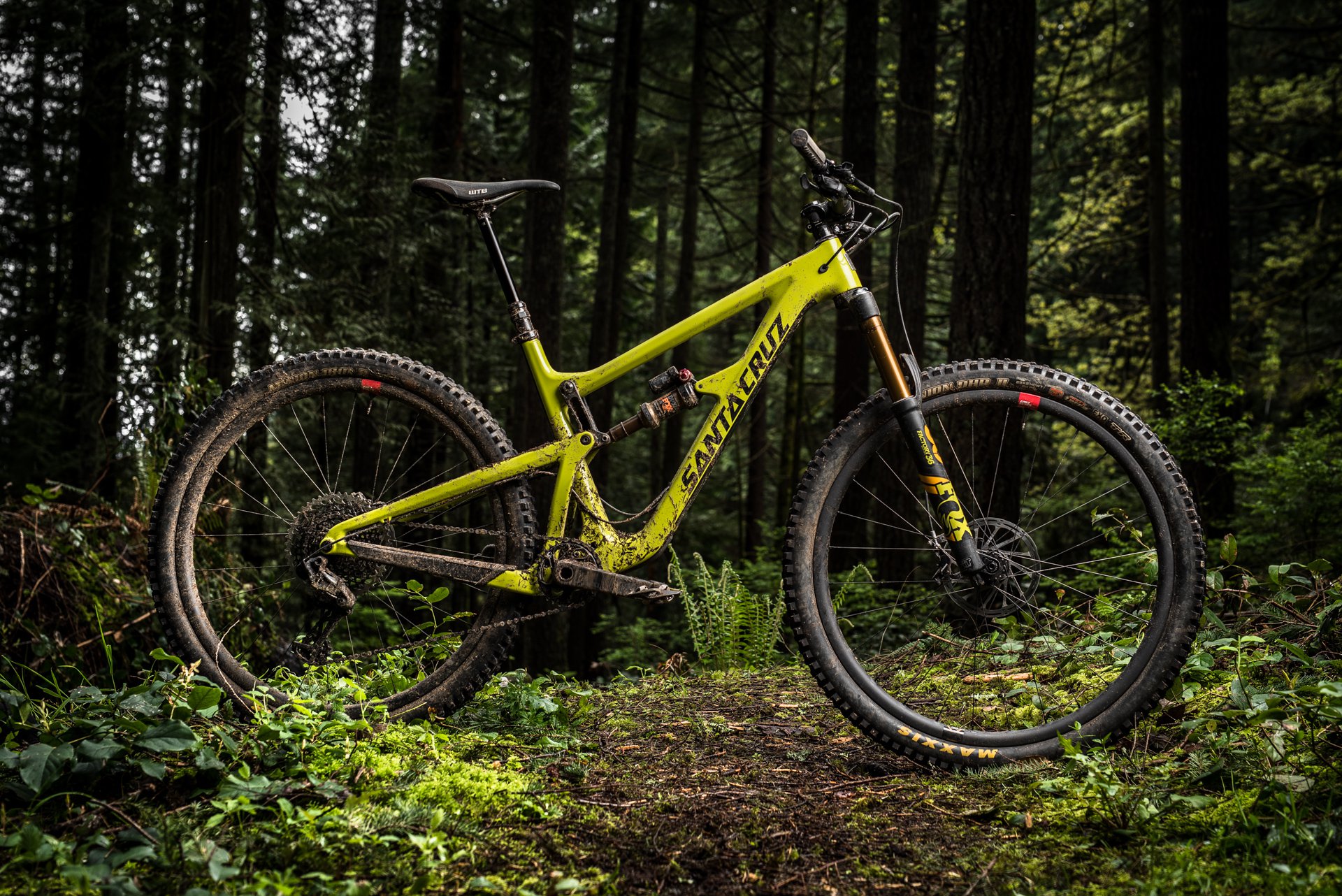 Drive side. Scroll for more views. 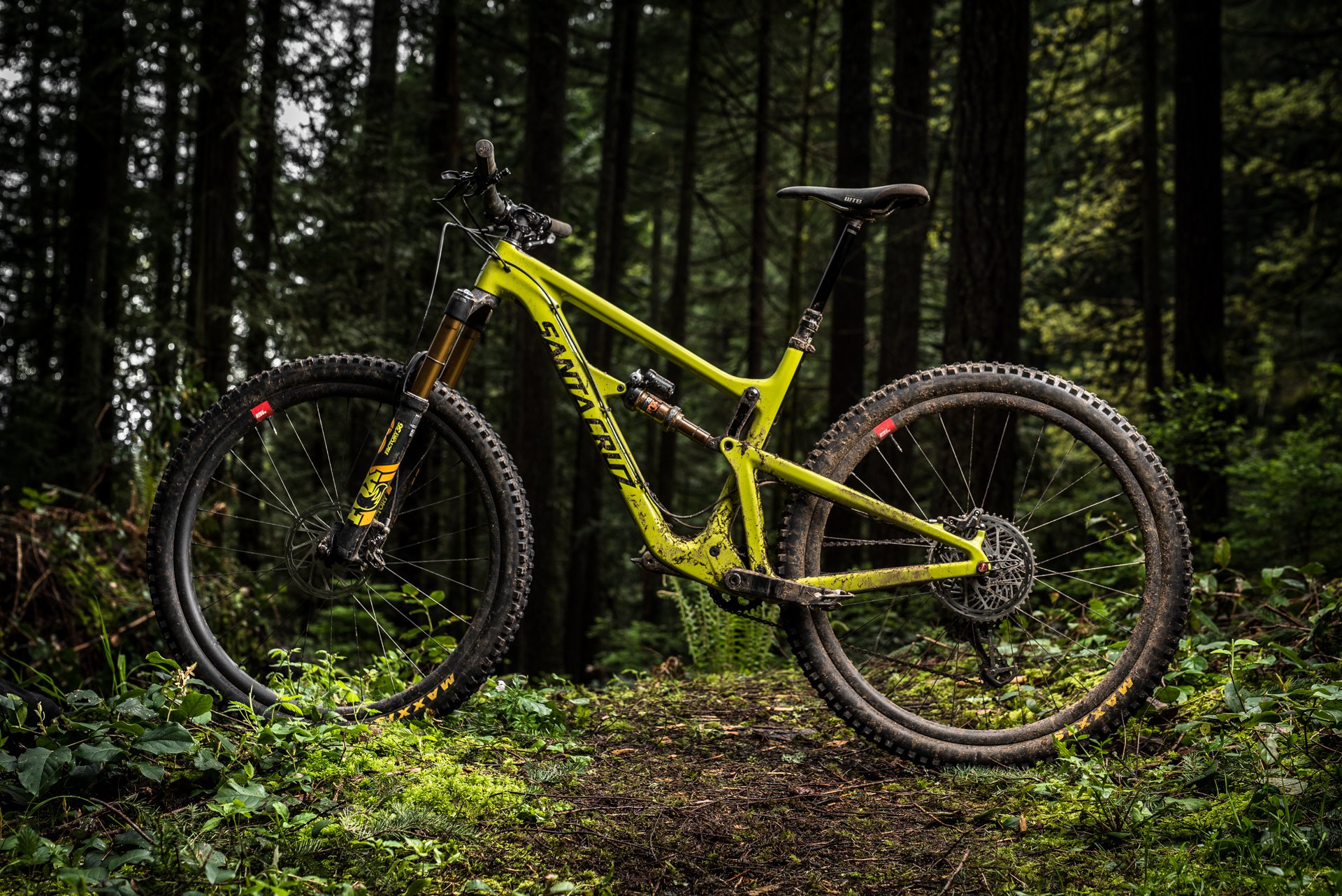 Non-drive shows the other side of the same dual upright swingarm design of the original Hightower. 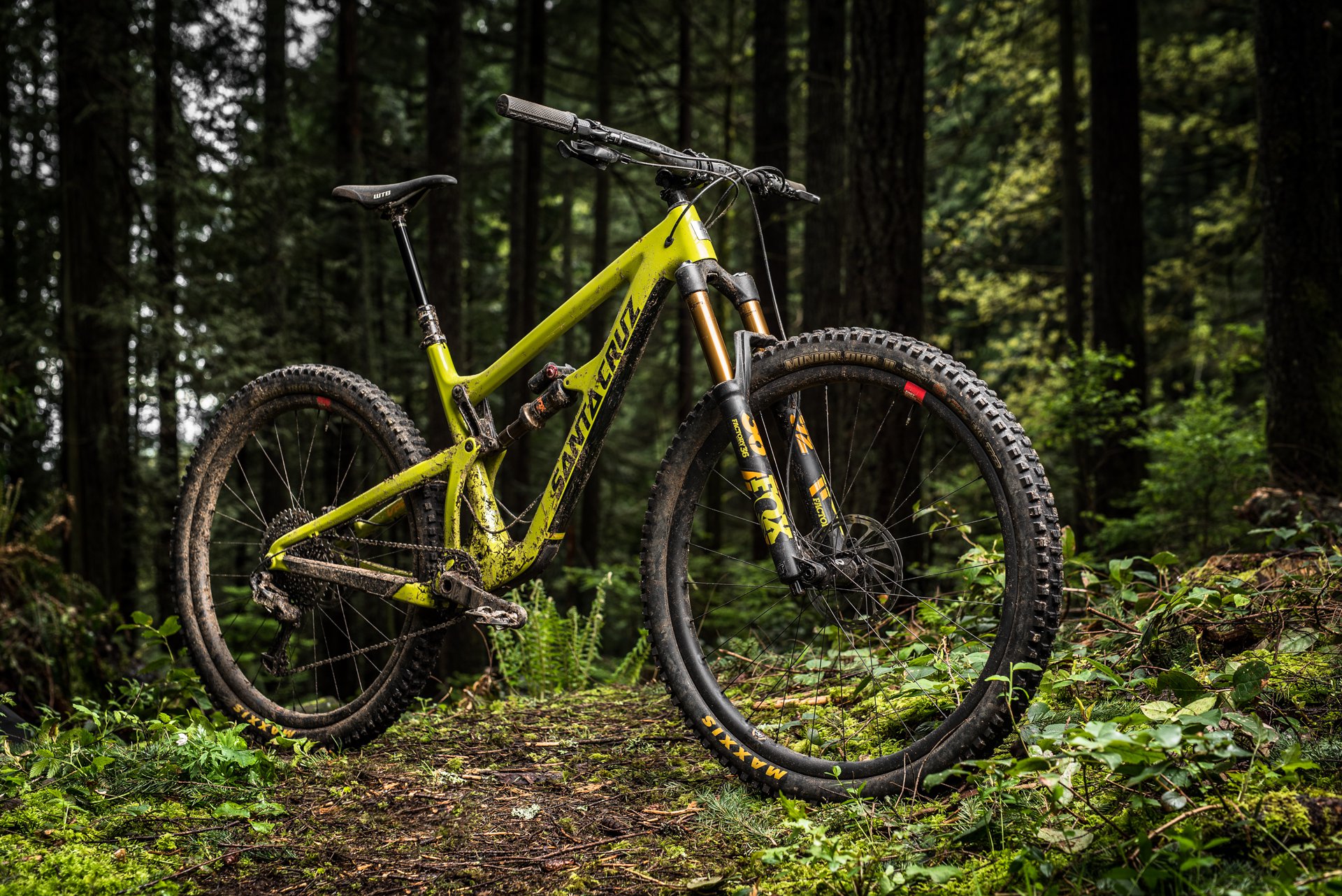 The HTLT has some new paint but the front triangle is identical to the OG HT. It lacks the flip chip so plus tires are not recommended, nor can you purchase the bike in plus form. Aside from the 29er only status, the bike differs from the HT because of the swingarm and links. The bike was conceived while Mark Scott (12th overall in 2016) was campaigning the Hightower on the EWS circuit. Brian Bernard, Santa Cruz's digital marketing manager, gave me some background; "Mark Scott was the primary driver behind the LT, but Iago Garay got on board as well and brought a different riding style to the whole exercise. Allan Cooke who manages the team also rides at a pretty high level and both provided a lot of feedback on top of the info that was gathered from the riders after every run." 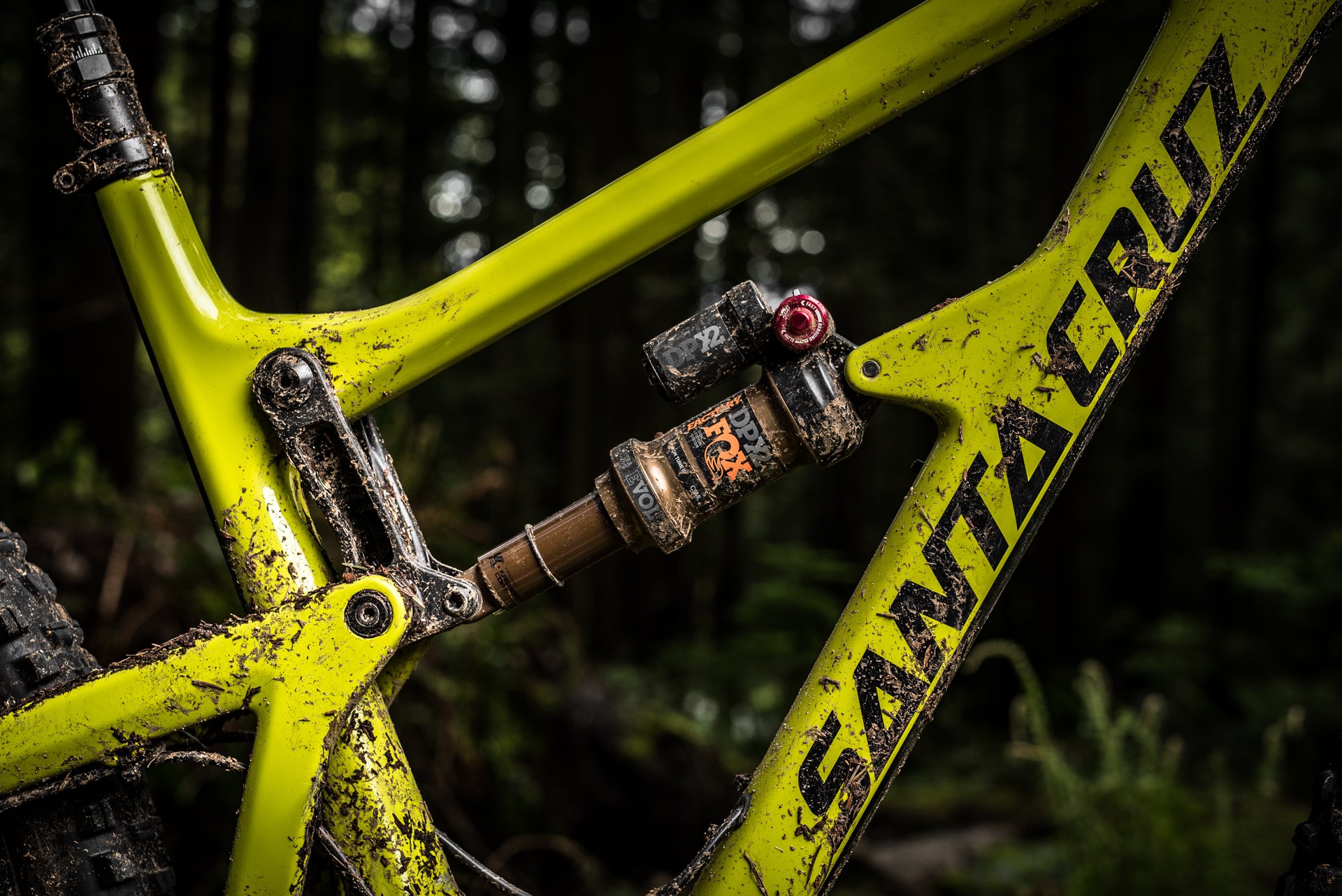 Fox Racing's newest rear shock, the DPX2 Evol is spec'ed. Riders who want a lockout circuit that is independent of the open and medium settings are well served here. You can have it running freely in open mode but still clamp it firm in lockout mode. I also appreciated the easy access rebound dial and valve. 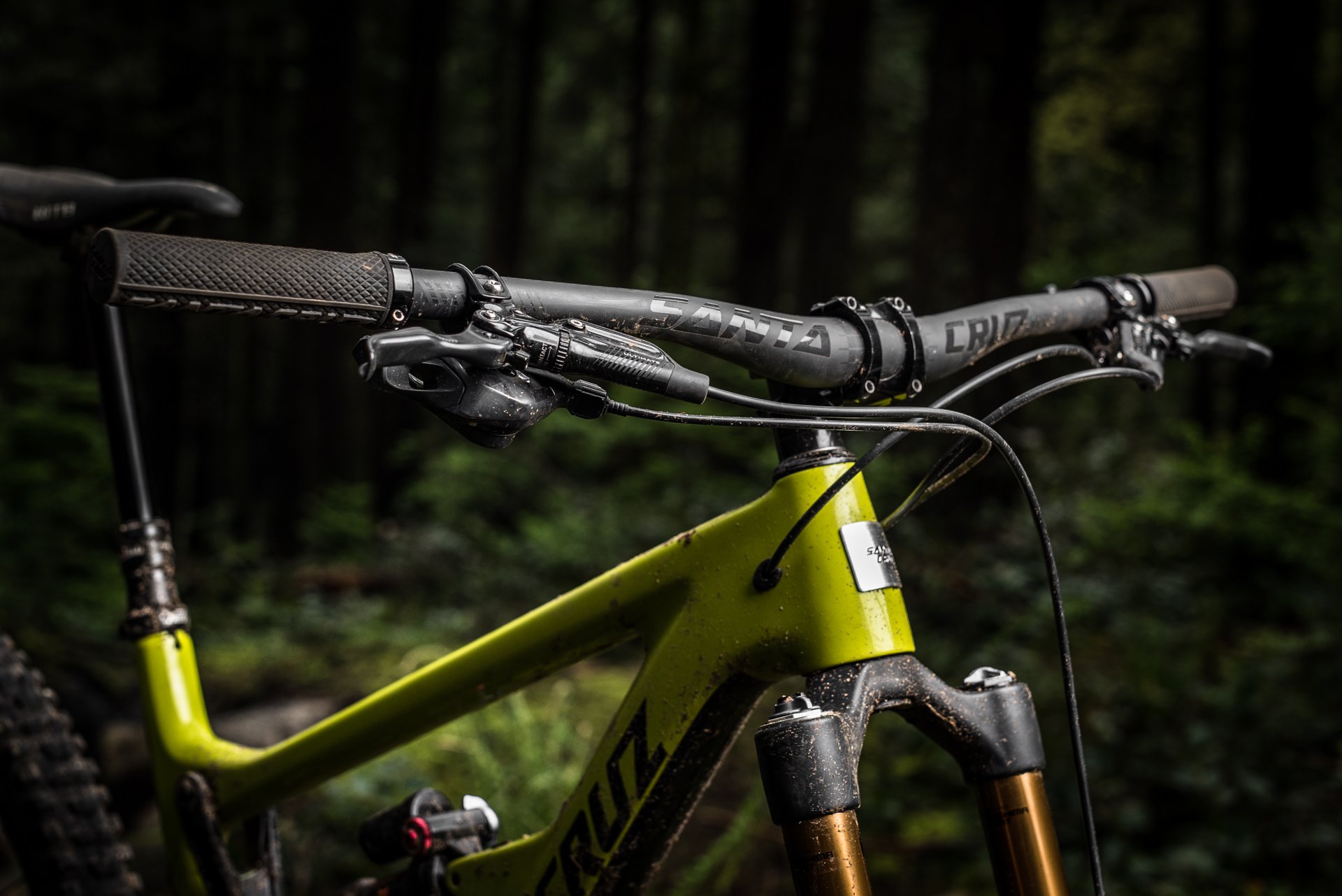 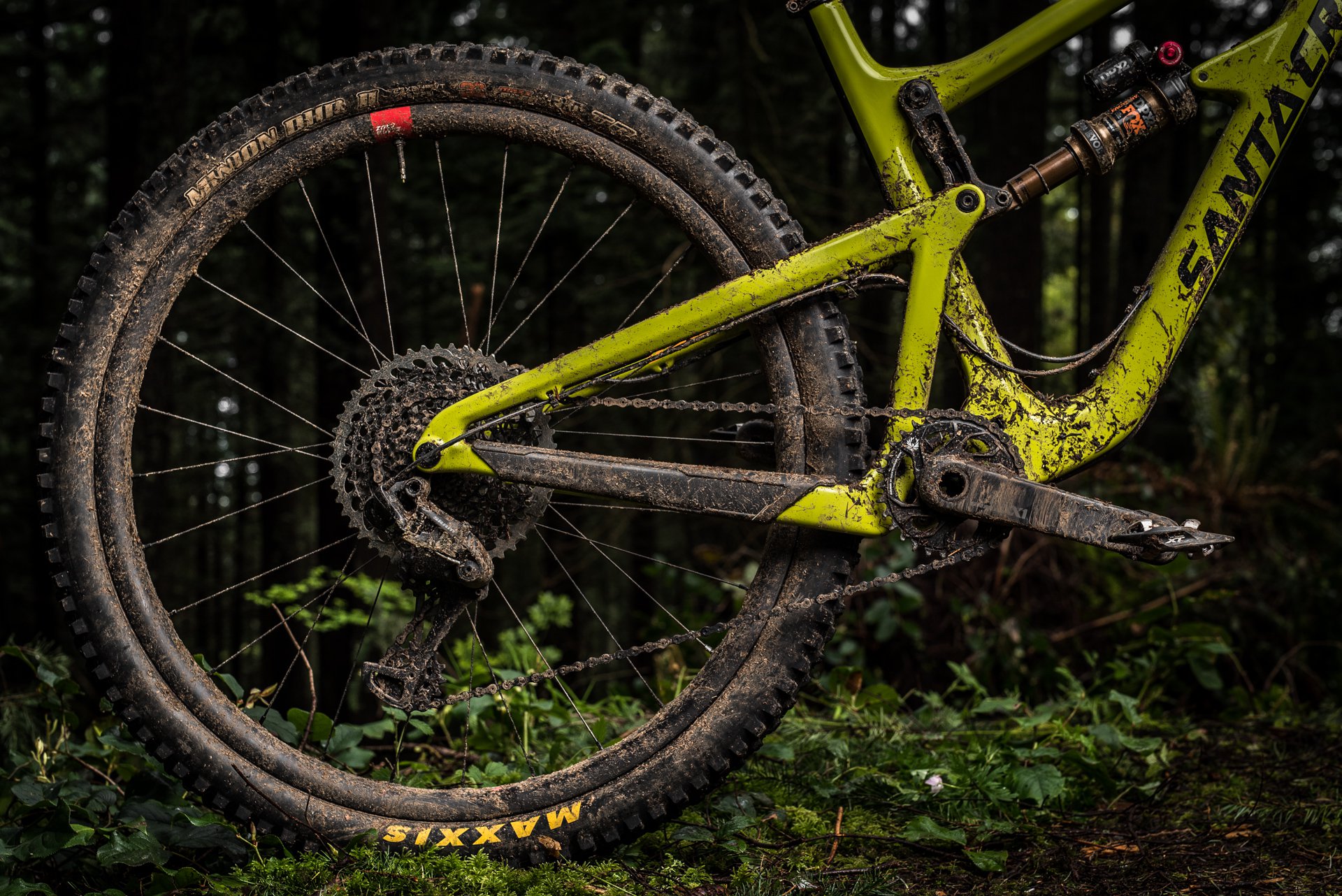 Many readers seem to want to hate Eagle. If you are in that category DO NOT RIDE IT. Your hopes and dreams will be shattered. The fire road I have been climbing lately, in very un-Canadian temperatures, has had me reaching for the 50 regularly. Eagle rocks.

Mark Scott liked the bike but felt it needed more than 135mm of travel to carry speed on some of the rougher courses. I appreciate the fact that Santa Cruz didn't try to do anything ground-breaking here or build something completely new to appease consumers or media; they built what the racers wanted. And I have to admit I expected more of a departure from the stock Hightower. I assumed there would be 160mm up front and I wondered if SC would go that deep at the rear, considering the original V10 and the long travel Nomad. Again rider input took the day. 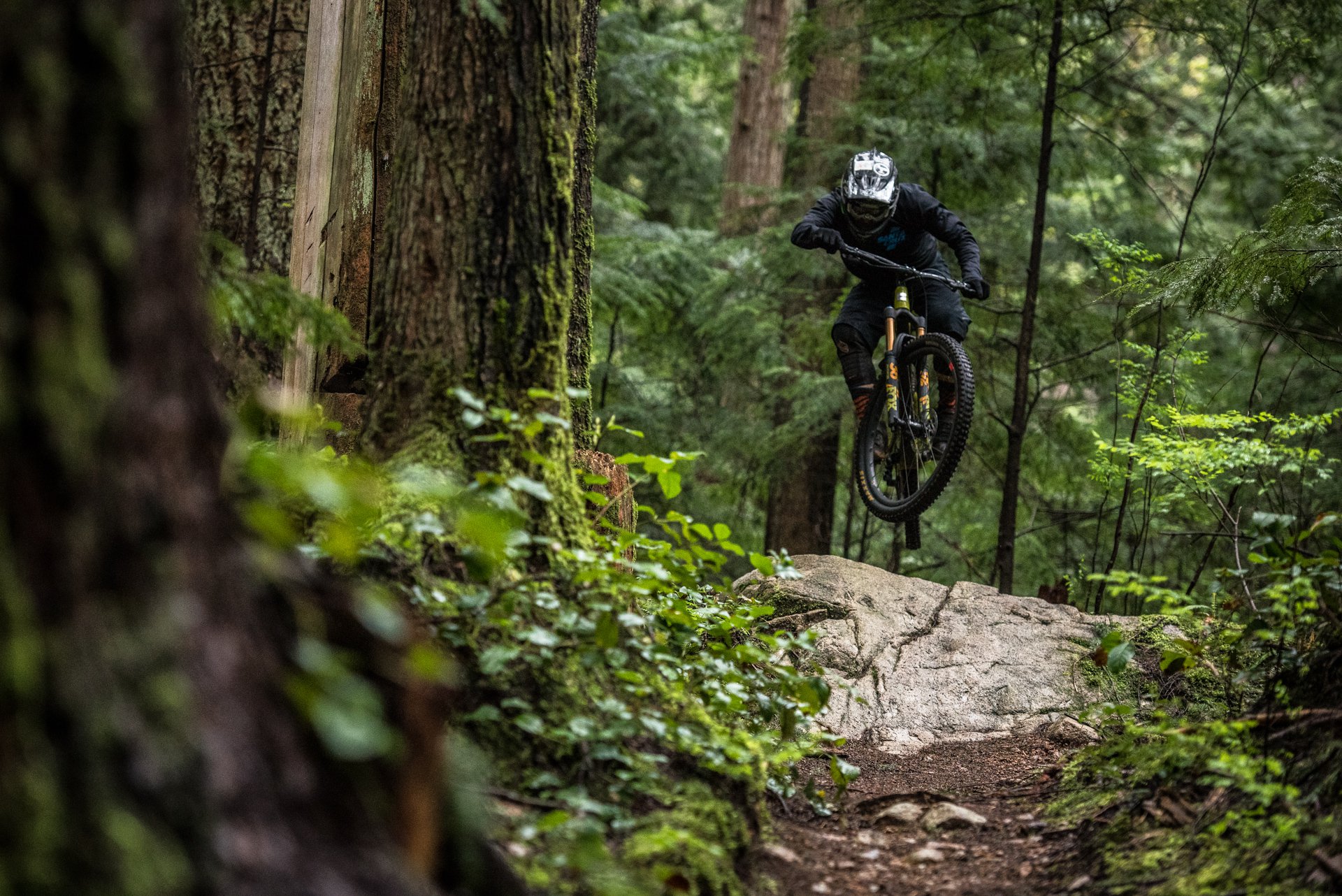 Seb Kemp rallying the HTLT on the Shore.

Don Palermini, the Santa Cruz Marketing Manager, explained the 150-150 travel choice: "We tried longer travel in testing but ultimately felt 150/150 gave us a really crisp ride feeling that the racers in particular really like--long-travel but agile. When you get to 160, the wheelbase and chainstays start to get pretty long and the bike can get to be a real handful. That said, if you wanted to run a 160 fork it would be OK...and the FOX 36 is internally adjustable to do so if you wish." 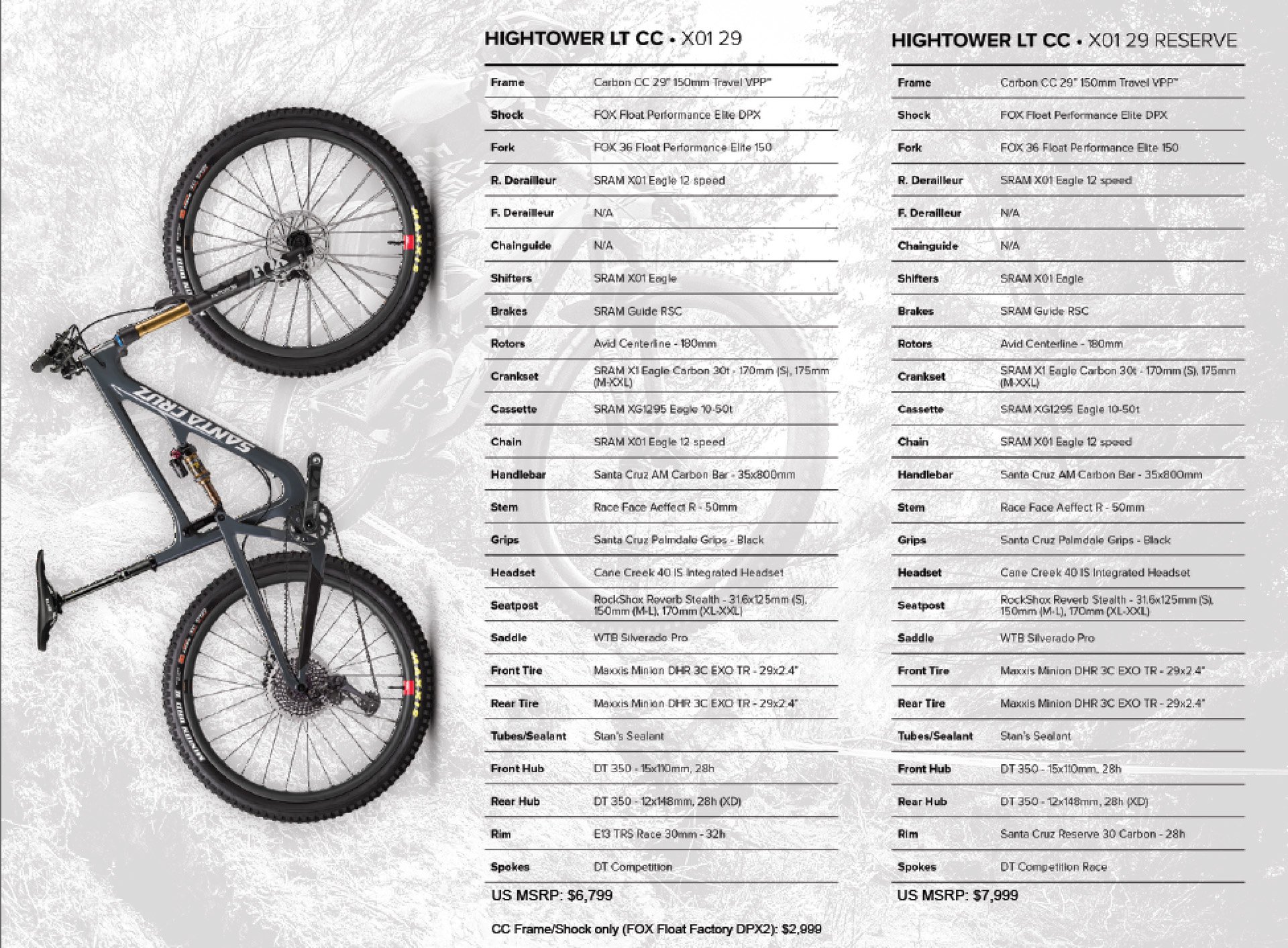 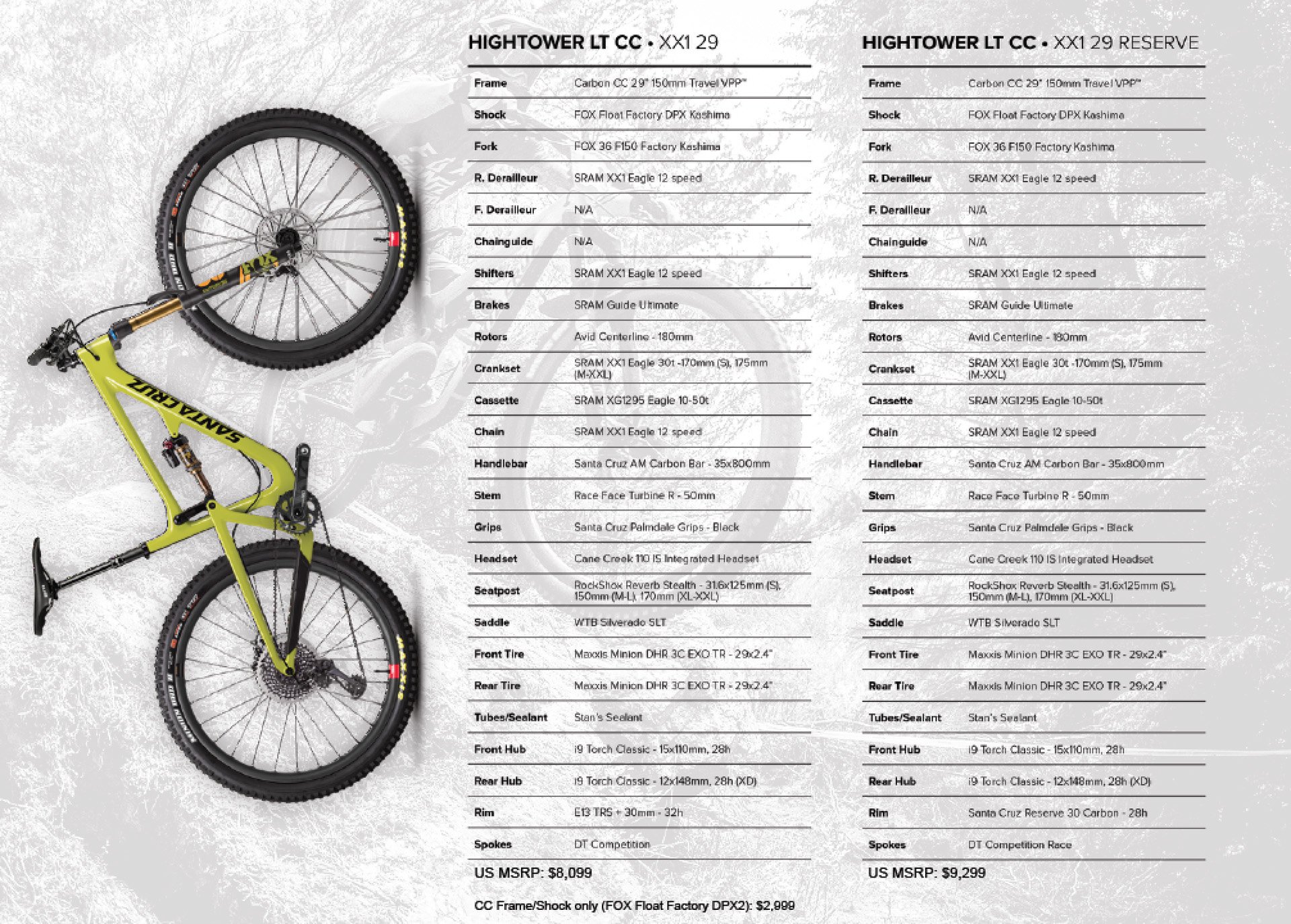 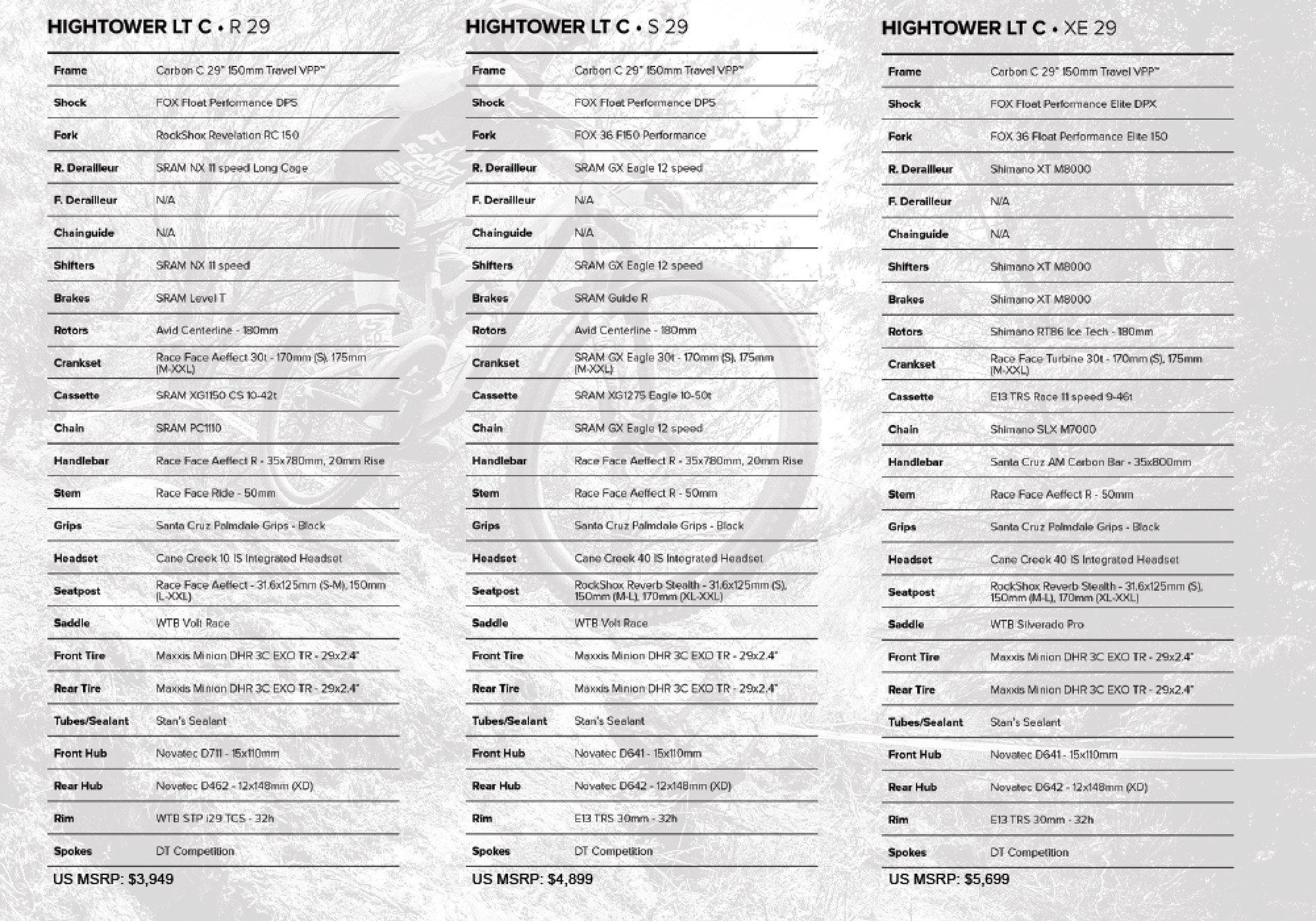 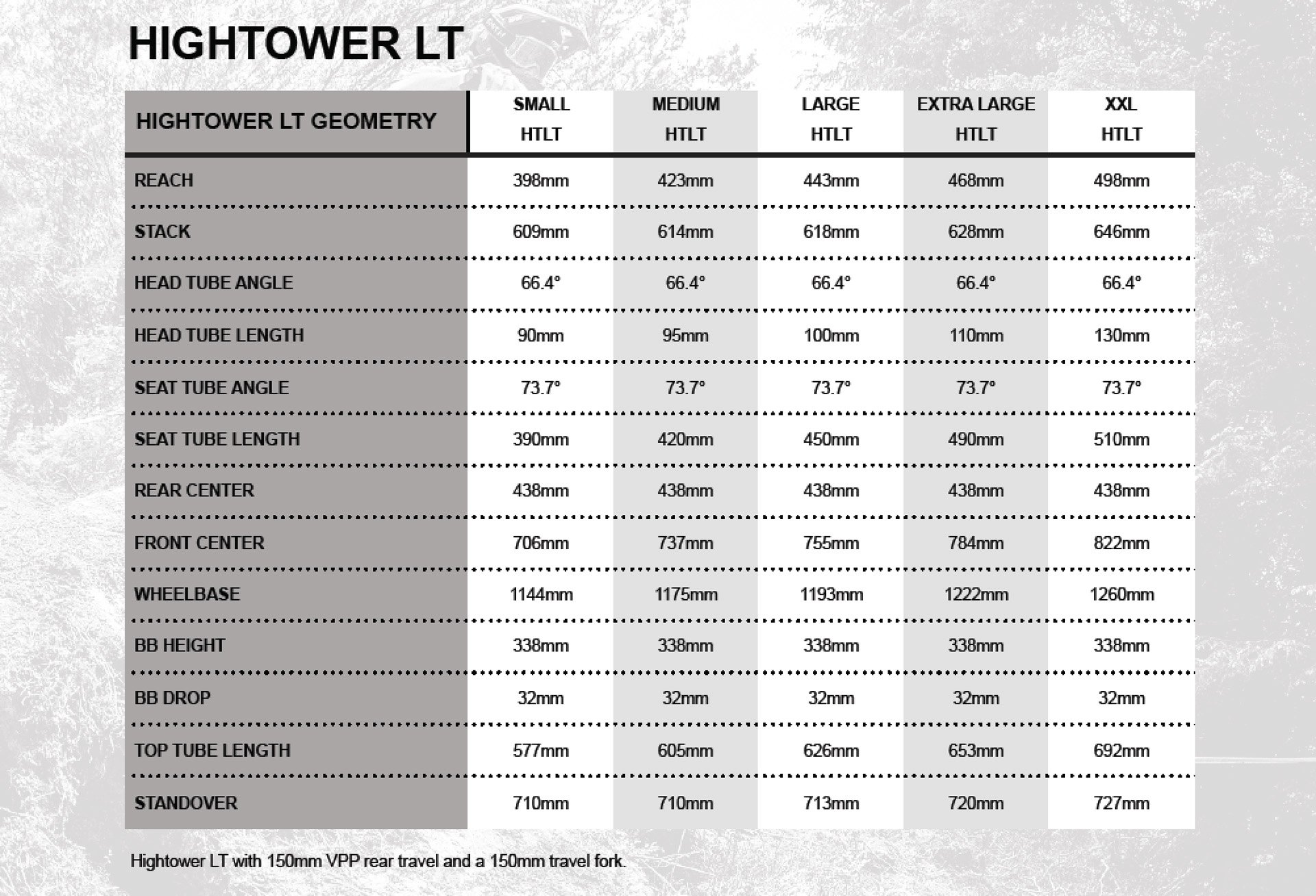 Hightower LT Geometry above. Scroll to see the differences between the original HT and the HTLT. 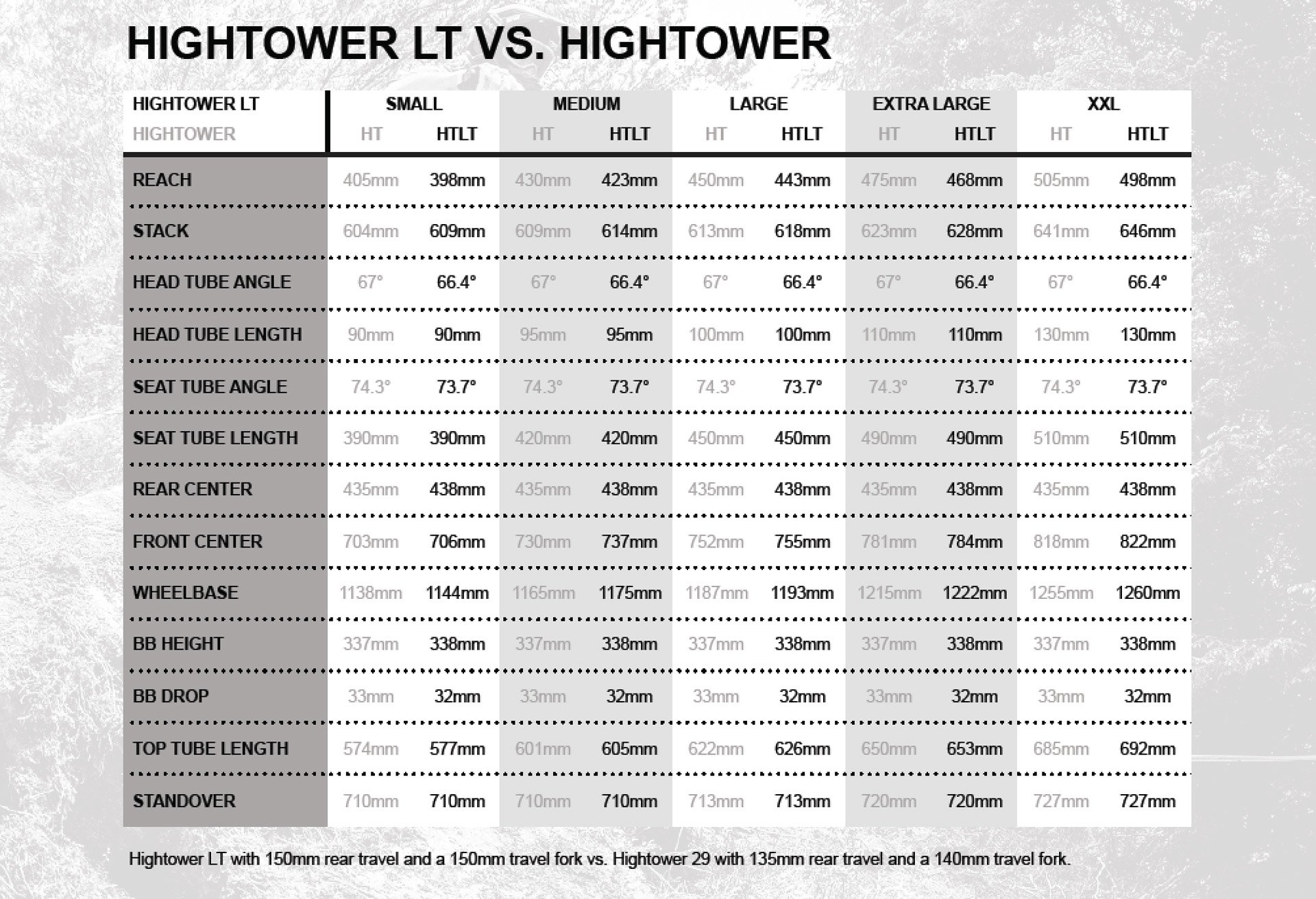 Every Santa Cruz rider on the EWS Circuit now rides the HTLT over the Bronson or HT 135, and they can ride whatever they think is fastest. After the laps I have ridden it's easy to see why the bike has been so well-received. 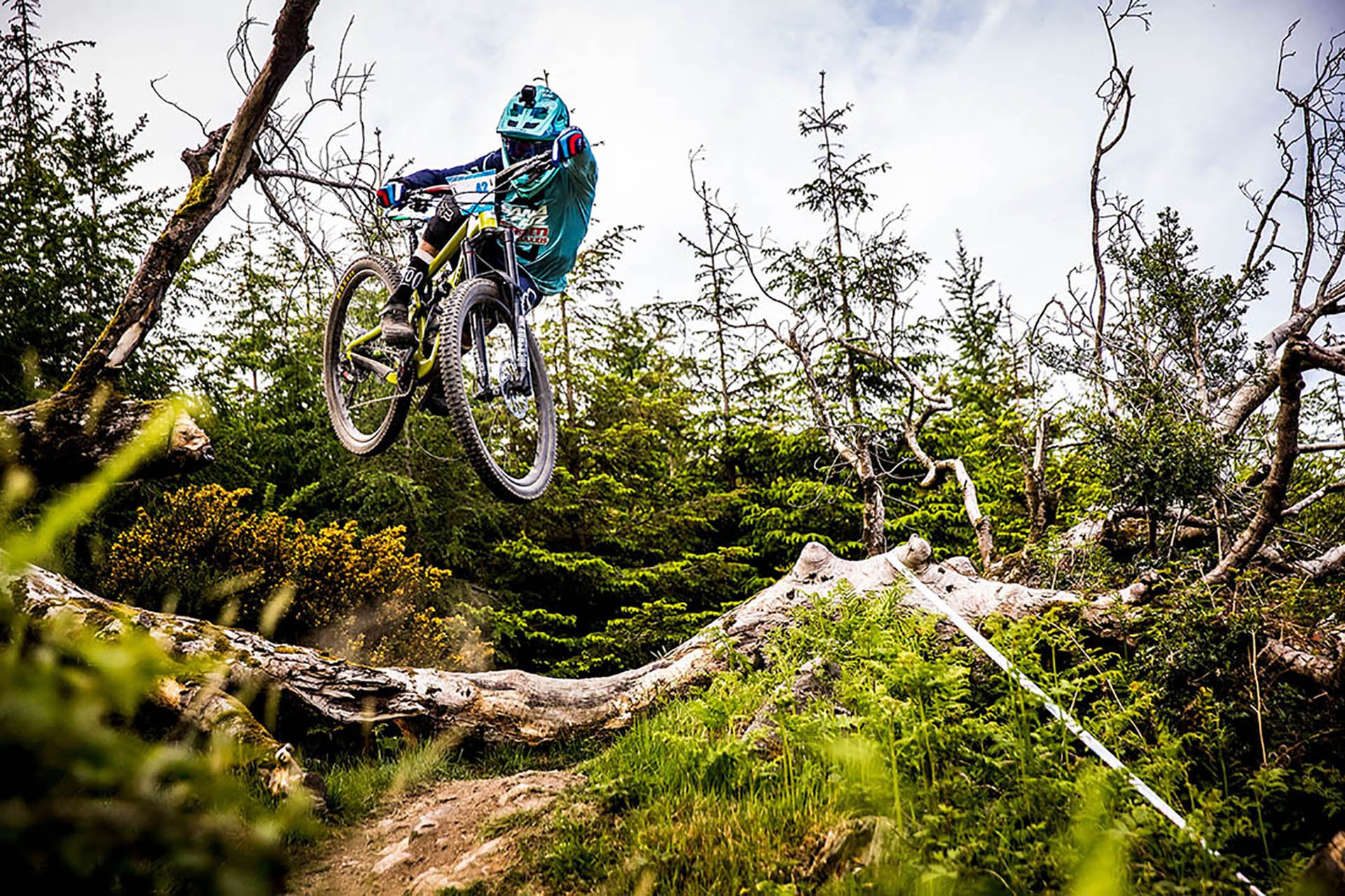 I can't argue with the finished product based on a handful of rides. I've done some big climbs and some even bigger descents and the bike has lived up to its billing. As expected the suspension felt a little wooden out of the box but partway through the second long descent things started to move nicely. Capable and predictable may not be the most exciting adjectives but these qualities allowed me to get a little loose, go off line and let off the brakes. 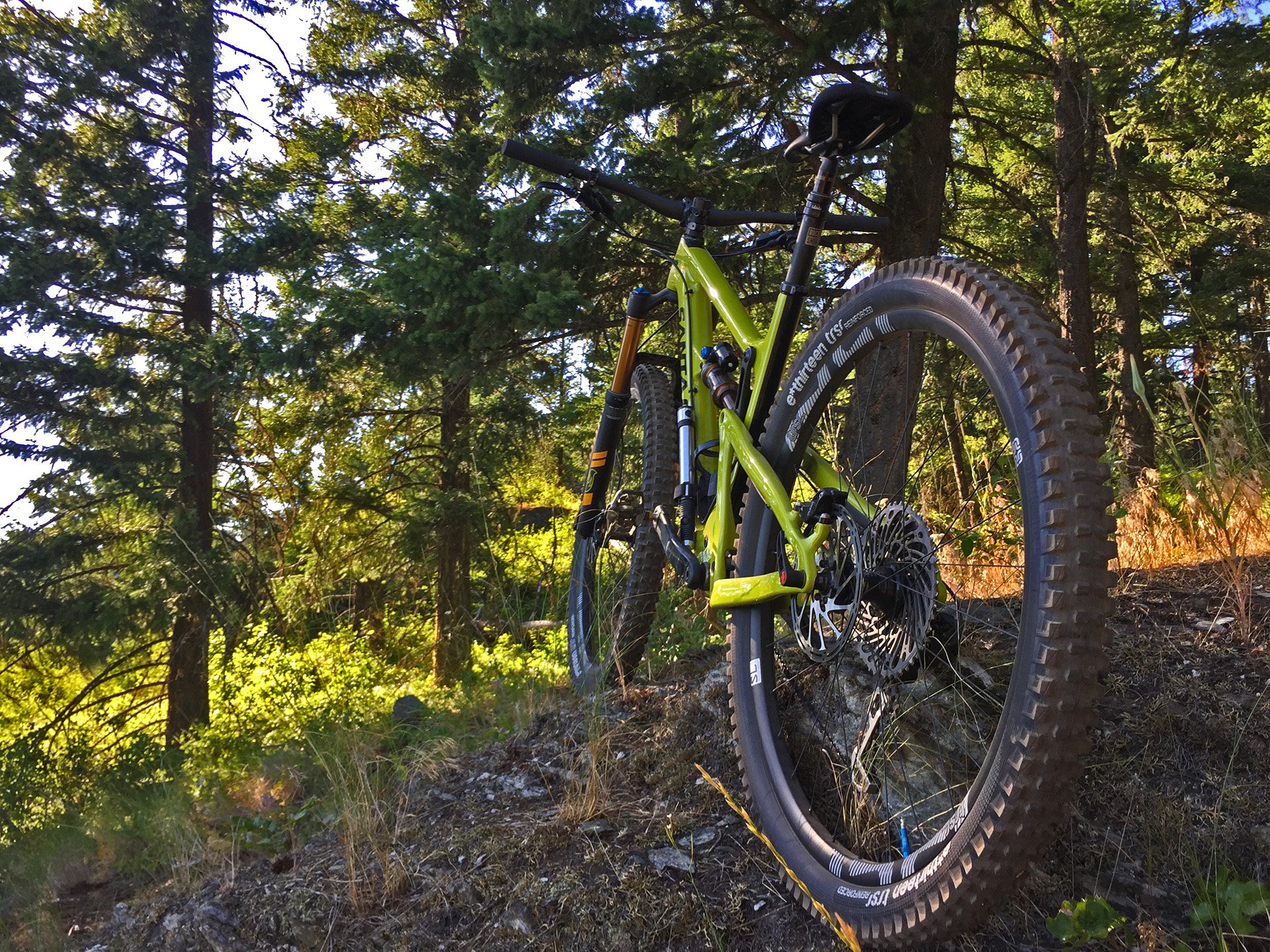 Consecutive embargo lifts had me trying out the new E13 wheels for the last couple of rides. I gave the Reserve wheels to a heavier harder riding buddy to abuse in the interim to see what he could determine. Photo - Cam McRae 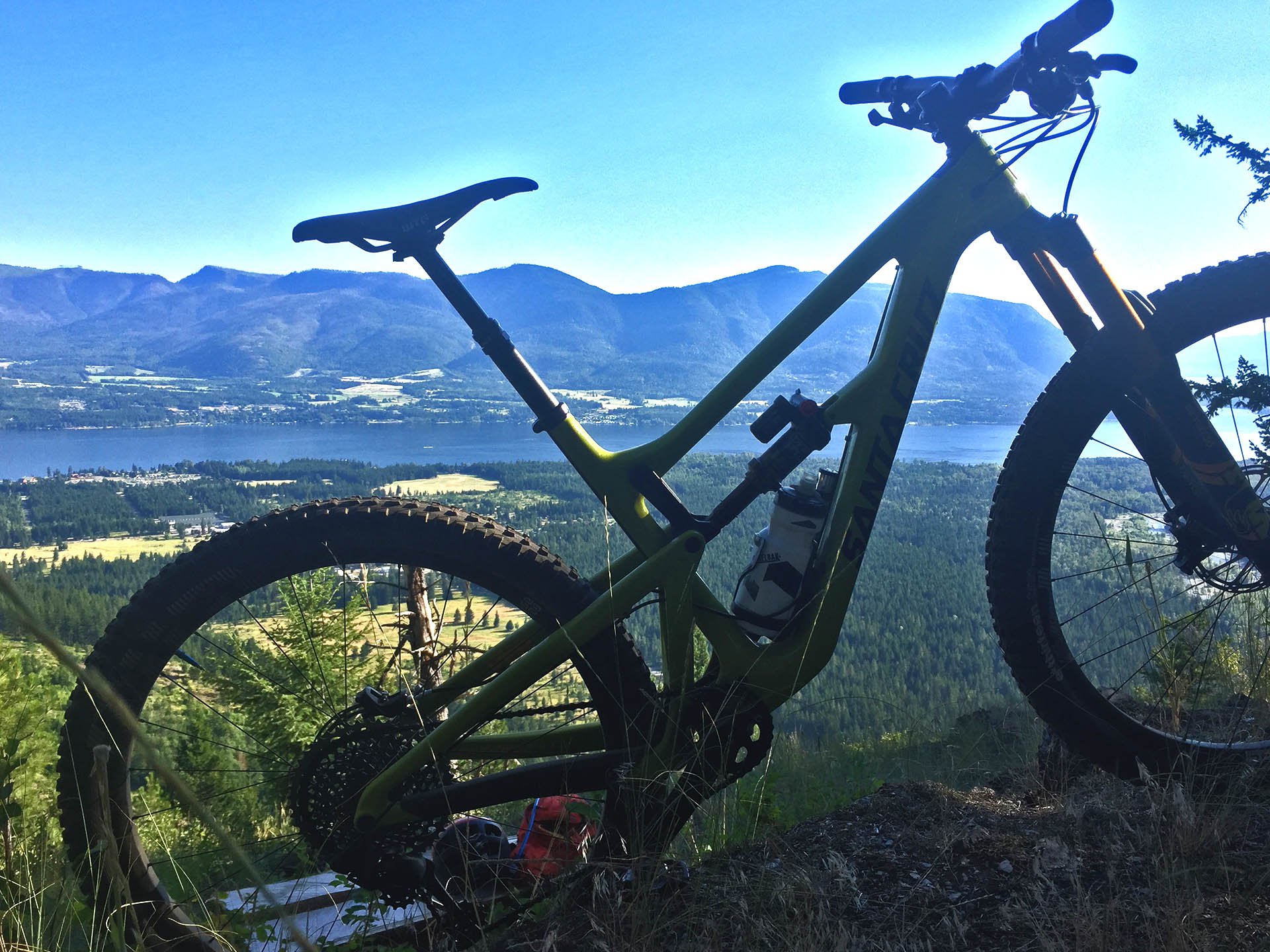 Time to tip it down. An issue I have discovered is that my bottle impedes the suspension movement. For the dh portion of the ride I finish the bottle and put it in my bum bag. I need an old school small size bottle. Photo - Cam McRae 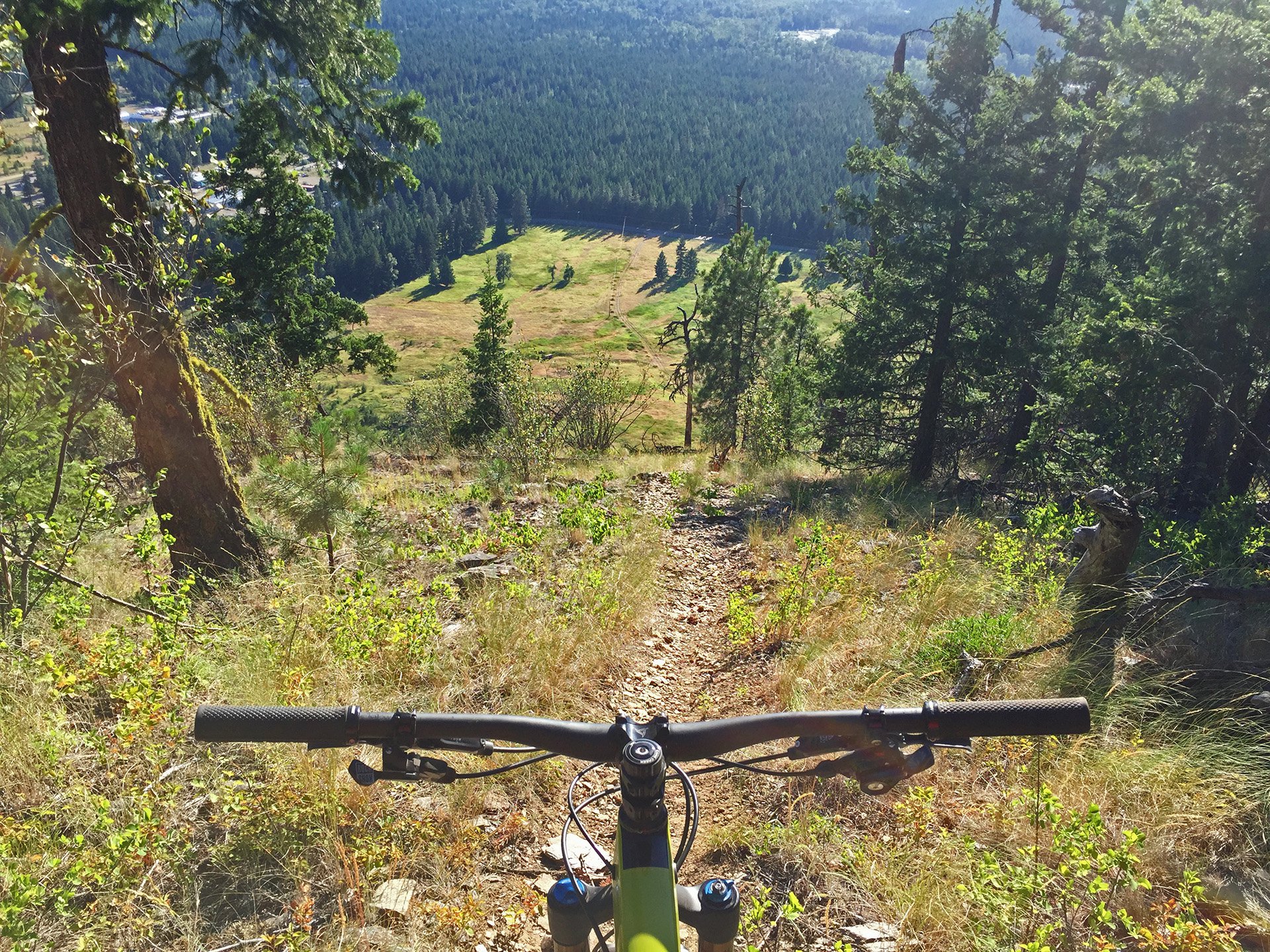 Of course this doesn't look steep but the field in the distance may give you some idea. Photo - Cam McRae

The last two rides I've done have been steep interior B.C. sliders with some rear locked up dirt surfing sections. What impressed me most on these lines was the HTLT's composure due to suspension that remained surprisingly active under braking. I've ridden these trails a handful of times but never with such confidence or speed. The second time down on the bike I took a pedal stroke into sections that I previously crept into. This is a lot of bike. 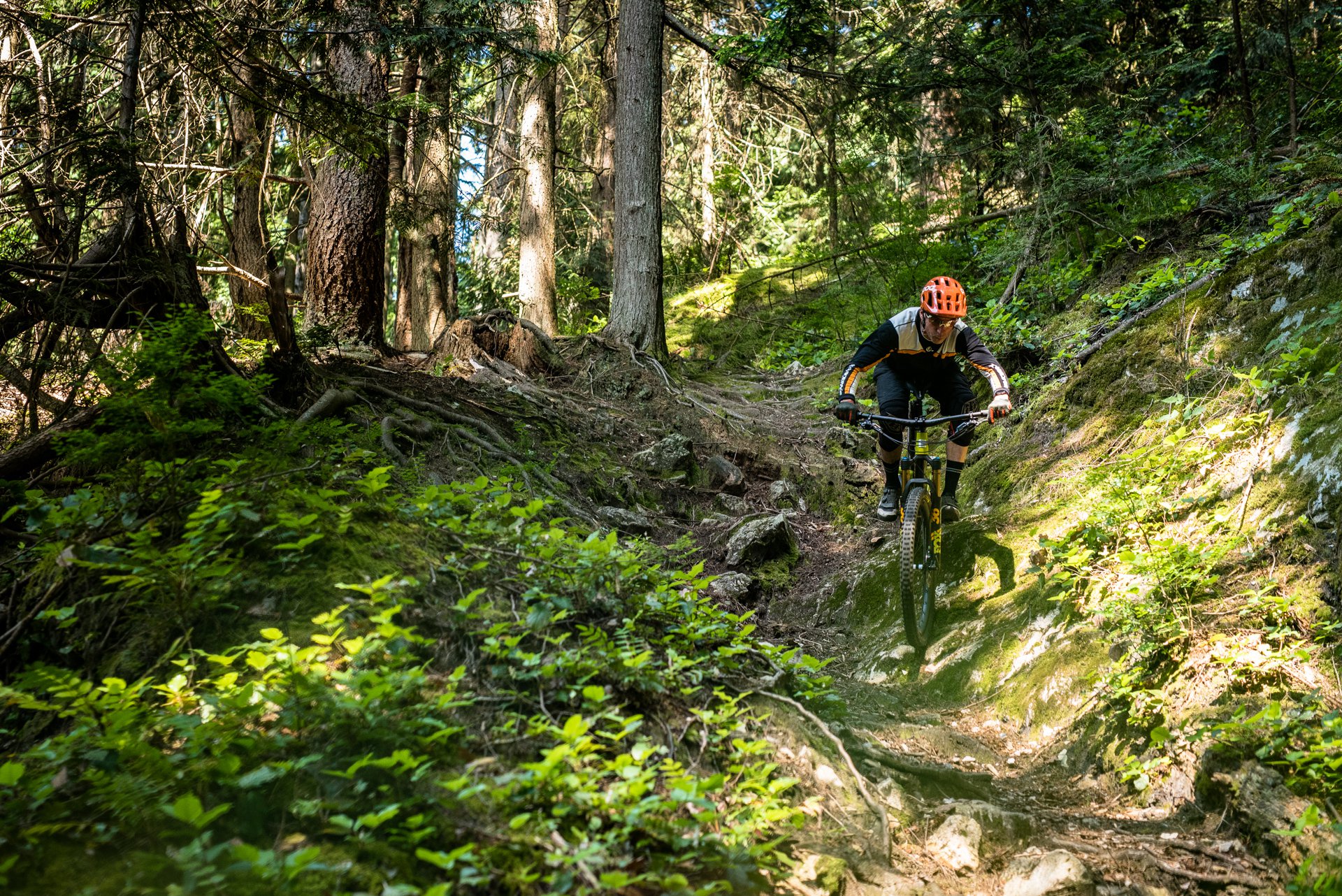 This was one of the lines frequented by the Skull Saboteur. There were no deliberately placed sticks or rocks but it was still gnarly. 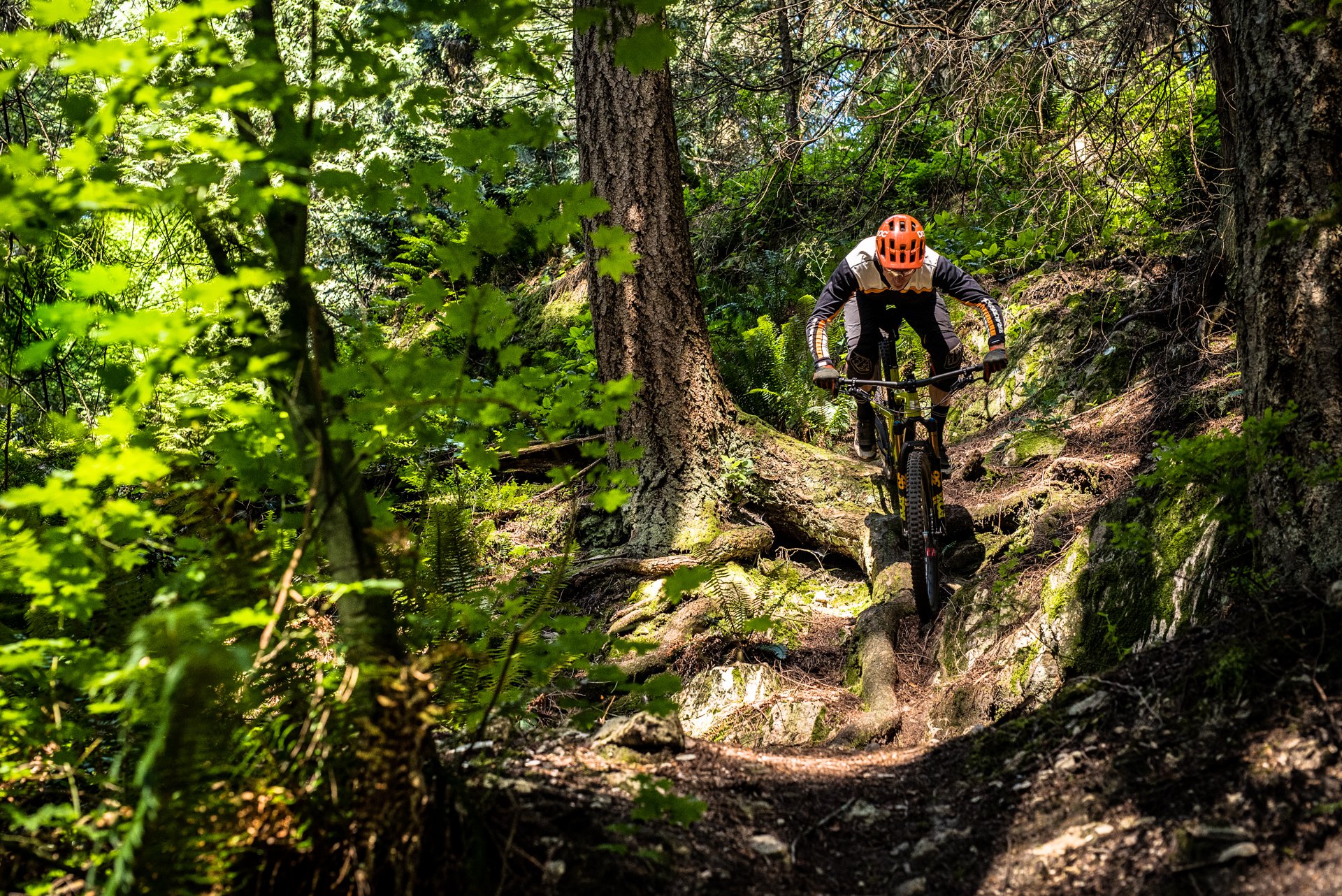 Before this I had never ridden this line cold since it's generally at the end of a long descent. It doesn't look like much in these photos (the light was terrible) but it's an intimidating move. The HTLT drew me over the edge without hesitation.

To add a couple more sexless words to this description I'll toss in balance and control. The planted feeling had me railing unfamiliar corners with more mustard than I normally muster. It's a willing line changer that is happy to get up on the rear wheel to bunny over small obstacles. I wouldn't yet describe the ride as lively, but I think that's more a reflection of fine tuning yet to be completed in the damping circuits front and rear. I've been a little lazy because the 2018 Fox Factory 36 Fit 4 up front and the Fox Float DPS Kashima in the rear both felt so good after my first few tweaks of the dials. I'll go deeper into the suspension tune on the full review.

I haven't had enough experience climbing singletrack on the HTLT and while it has felt adequate thus far I need more data. My initial feeling is that while the HTLT climbs well it can't match the Yeti SB 5.5, one of the best pedalling long travel 29ers there is. 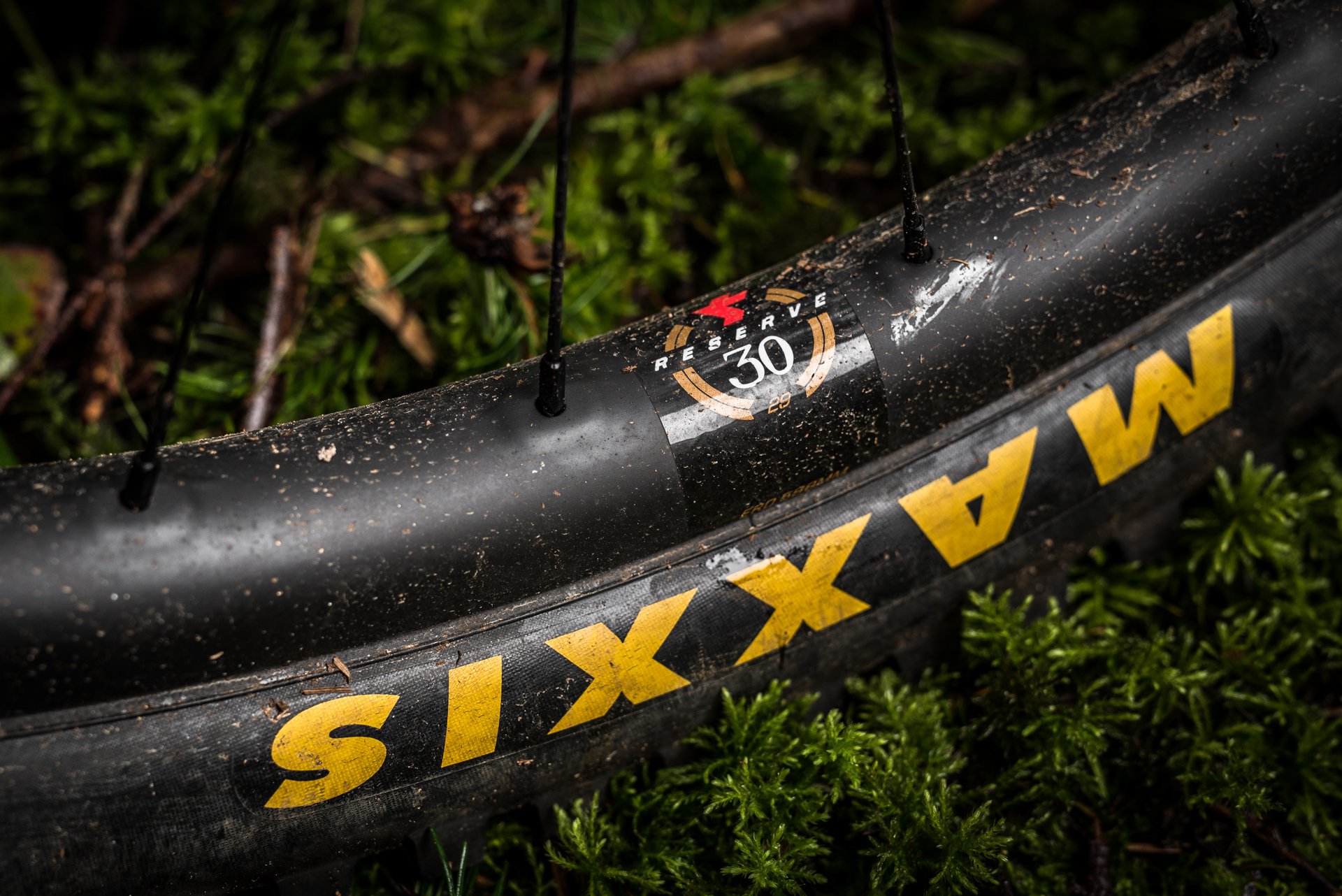 This is embarrassing really. Out of the box there isn't a single component I'm in a hurry to swap out. I guess that shouldn't be a big surprise with a bike that is within $700 of 10k US, but that isn't always the case. I love the Santa Cruz grips and bar, Eagle has been flawless since I used the B tension Adjustamajig. The only issue I have had was near the end of the last descent of my most recent ride when the front brake had over-heated enough that I decided to wait until it cooled before finishing the trail. The Santa Cruz Reserve wheels weren't spec'ed with Industry Nine hubs as the chart suggests but the bike we were sent had DT Swiss hubs.  I prefer the gentle DT hum so it was no loss on my end. Maxxis DHR II front and back is one of my favourite tire combos as well. On second thought, one change I might make personally would be to try a set of new SRAM Codes to see if they resist heat build up as well as advertised. And that's it. 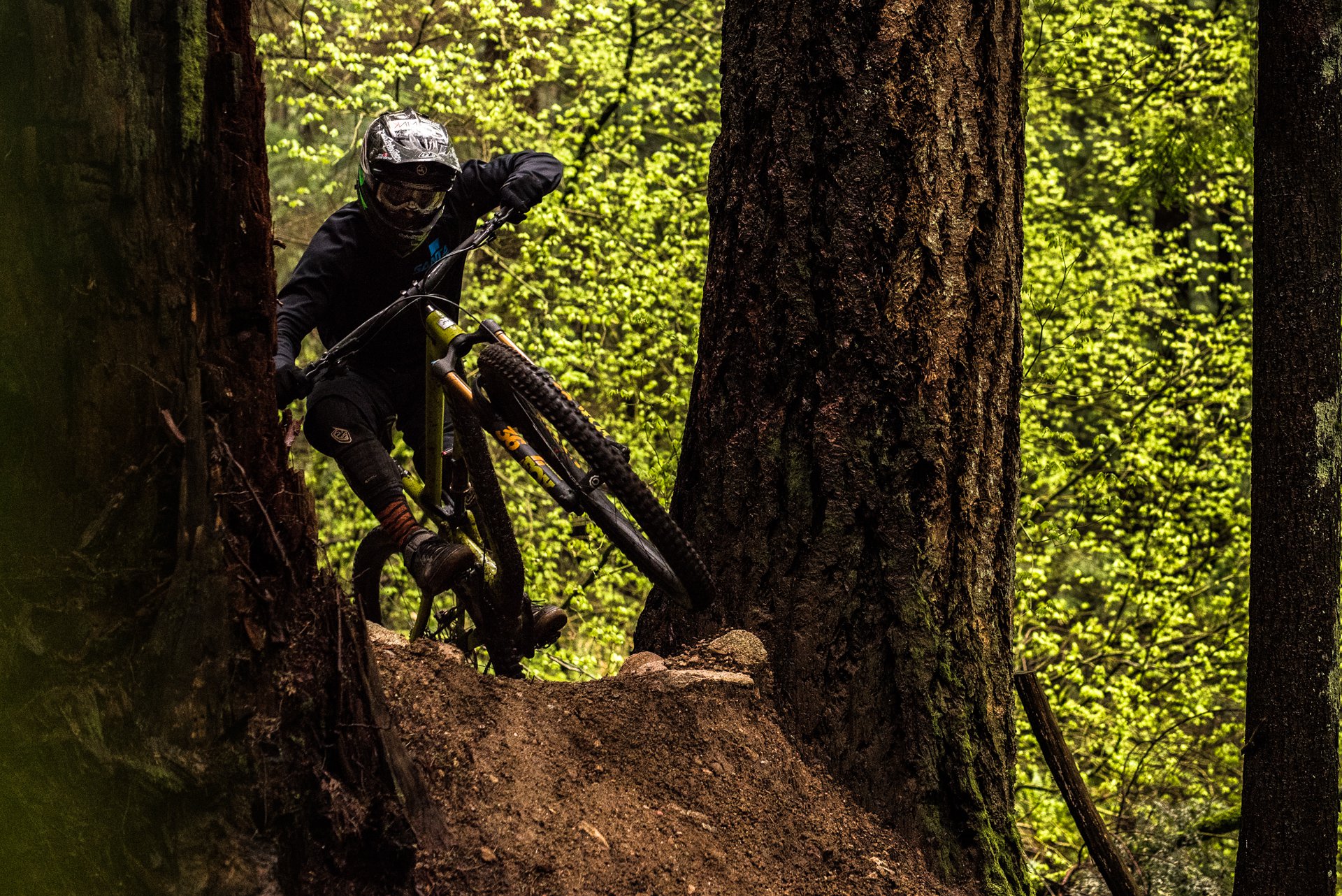 Seb Kemp getting zesty on the HTLT.

I don't think my friends need to have an intervention. I think I have been able to see through the beauty fog and evaluate this bike accurately. Aside from the water bottle issue, minor at worst, and the Guide brakes getting a little hot, the HTLT is pretty to look at while delivering trail manners and excellent performance on aggressive terrain.

Look for the Hightower Long Travel at your Santa Cruz dealer as of right now. For more info click here...

For a First Ride, that was a good review. And that opening sentence! Had me hook line and sinker. Tip of the hat to you, sir.

Whoa, I'd read your long-term write-up, but just came across this first-look piece. Vertigo! Seems like this bike was a goose-stepping beauty queen at first. Kudos for keeping an open mind, and then writing an honest, articulate review--impressive, and a good read. But, what happened?? Did the shock degrade during your time with the bike? Even after the happy ending, it sounds like you'd prefer the SB5.5 overall--is that about right?