Inside the New Intense Bikes 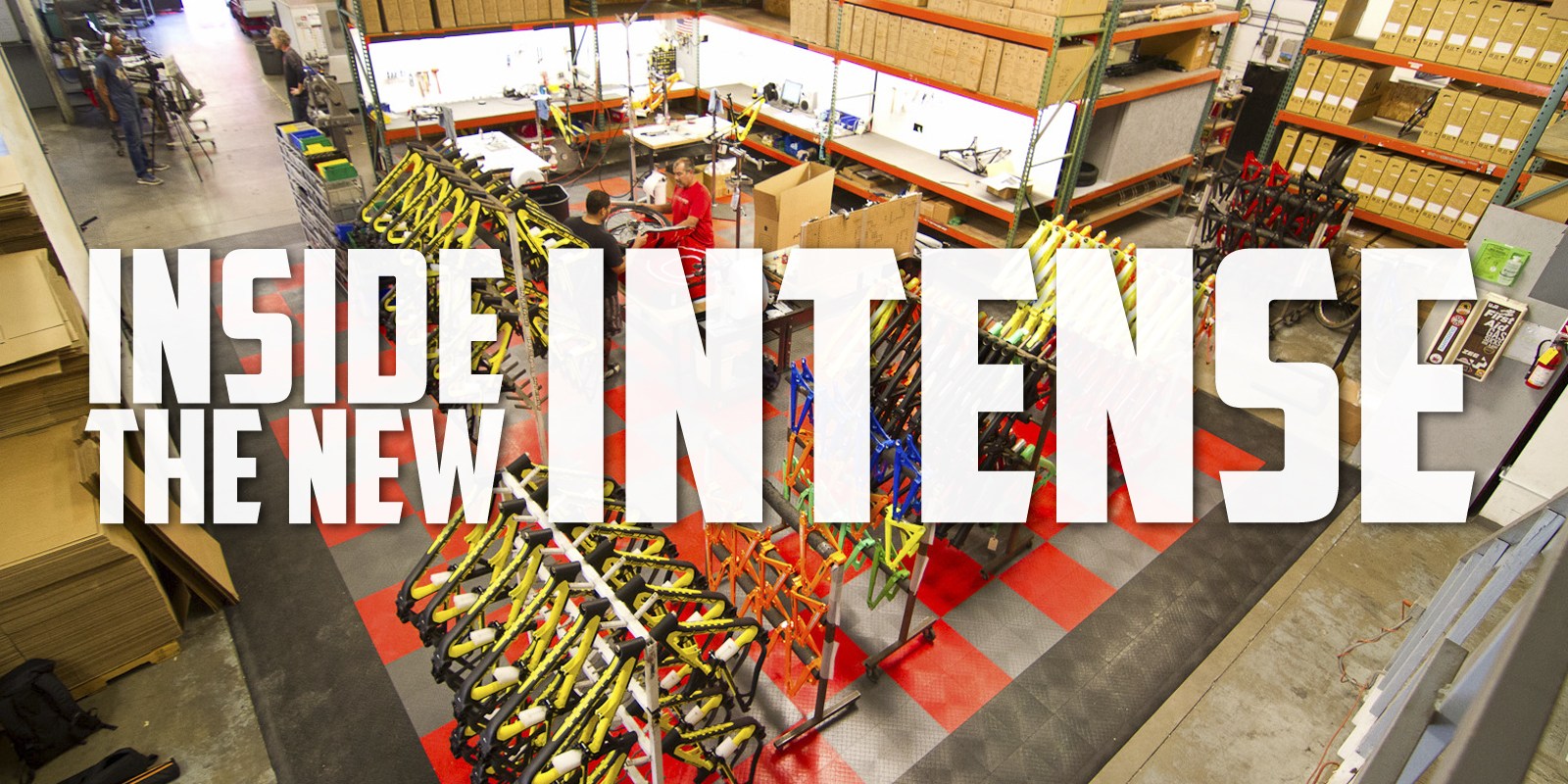 Intense Cycles has been around for almost a quarter century, with its early history solidly embedding the brand’s importance in the mountain bike world. These were the early days of mountain bike racing, where bike design moved forward in leaps and bounds. Closer to the sport’s roots, each manufacturer had wildly varying designs as builders went into the unknown with bicycle suspension. These were race-bred bikes, and back in those days, our industry was much less concerned about brand. 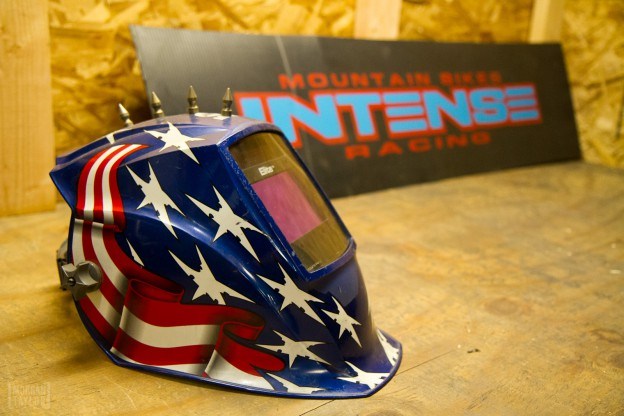 Intense leans on its American-made heritage and those roots are still visible in their Temecula, CA factory.

While Shaun Palmer’s early mountain bike career and 2nd place at the 1996 World Championships may have been one of the more visible moments of Intense’s history, it’s possibly even more significant to note that Intense frames were rebadged and ridden by big names throughout the ‘90s. Nowadays you might find rebranded rubber and the occasional test piece, but for the most part riders stick to their sponsors’ products for obvious reasons. 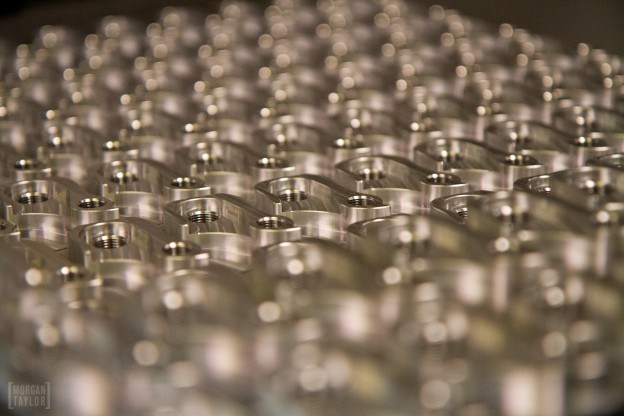 Manufacturing all of their small parts allows Intense to have complete control over their finished product.

Intense was an important part of the early innovation of suspension bicycles and, over the past 20 years, the company has retained much of its race-bred roots. Manufacturing all of their aluminum frames and the vast majority of the small parts that go along with them, Intense is one of few brands that can still lay claim to the truly American-made mountain bike. 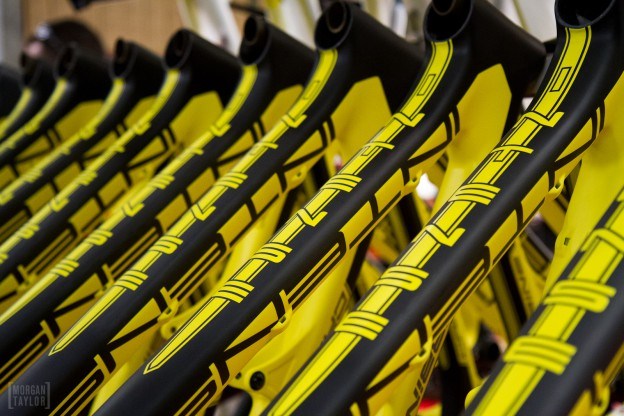 But carbon is big these days and Intense wasn’t about to miss out on this train either.

But, today is a different world: one in which a small California-based manufacturer could no longer compete at anything but the boutique level. The company was faced with an ethical decision in recent years: go carbon and grow the company, or maintain the status quo. If 2013’s numbers are any indication – a 40% growth in revenue – the choice to go carbon was a good one. 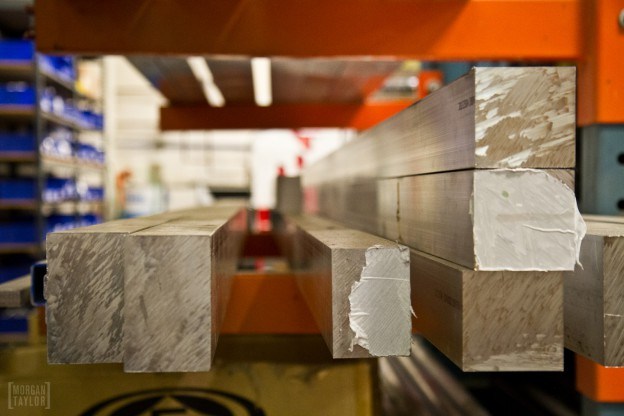 Aluminum stock waits to be turned into pretty well everything you need to make an aluminum suspension bike, as well as all the hardware for the carbon frames. 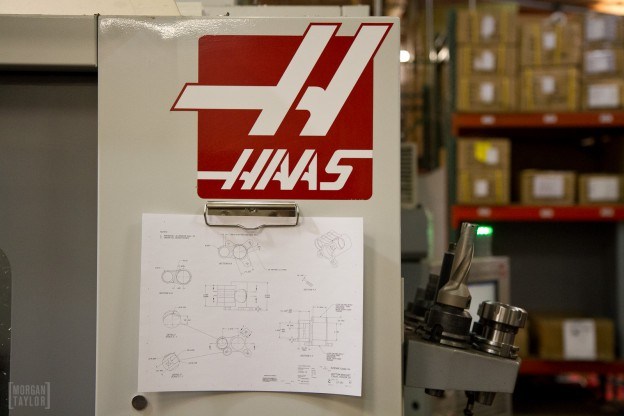 The American-made theme continues into the machinery: Intense only uses Haas mills. 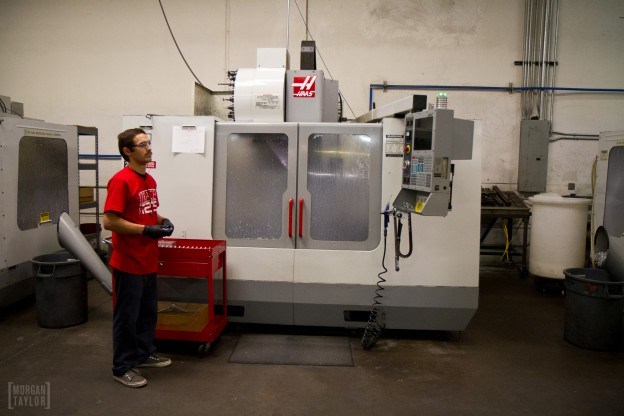 More than a few of these puppies were churning away at chunks of aluminum while we toured the factory.

It is not an uncommon story to hear about the creative type that gets pulled away from his passion to run a business. Designers and engineers rarely get into this business with the desire to run a big company. Fortunately this industry has also been around long enough that there are people who are experienced with – and motivated to do – the business side of things. 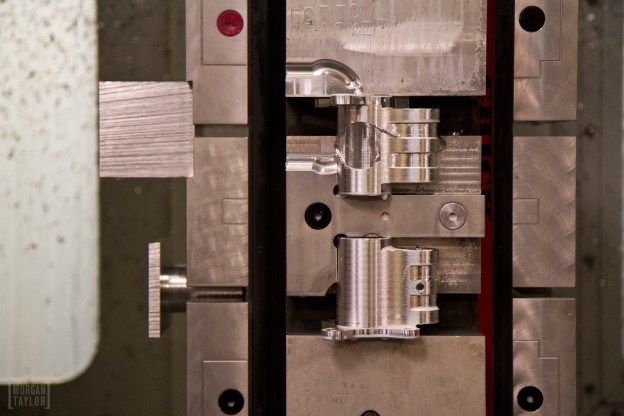 In this particular operation, the mill does the front and back halves of a bottom bracket shell in one program, cutting manufacturing time. 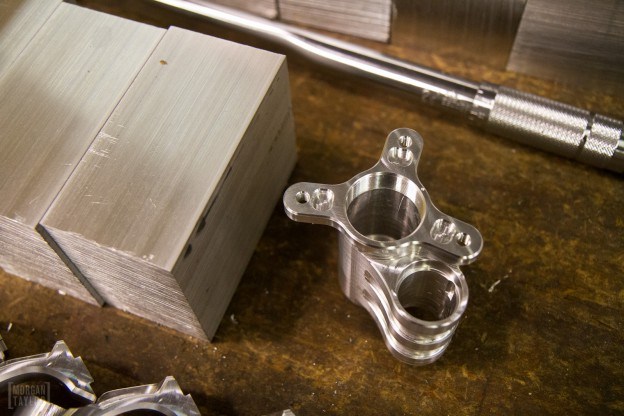 The finished product, and what it started out as on the left. 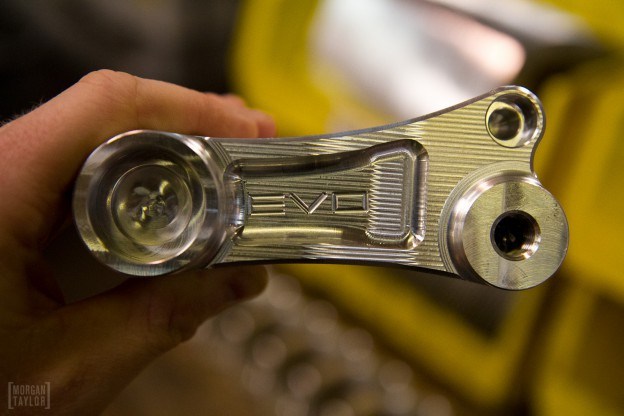 With the aforementioned 2013 growth spurt marked by successful mid-wheel bikes and a line of carbon frames alongside the US-made aluminum models, Intense front man Jeff Steber and his business partner Marv Strand were ready to make a move. Enter the company’s new CEO and “head coach” Andrew Herrick, who has made a career out of stepping in just at this moment. Herrick is joined by CFO Eelco Niermeijer, COO (aka product manager) Chad Petersen, as well as additions to the sales team. Indeed, big moves are being made here. 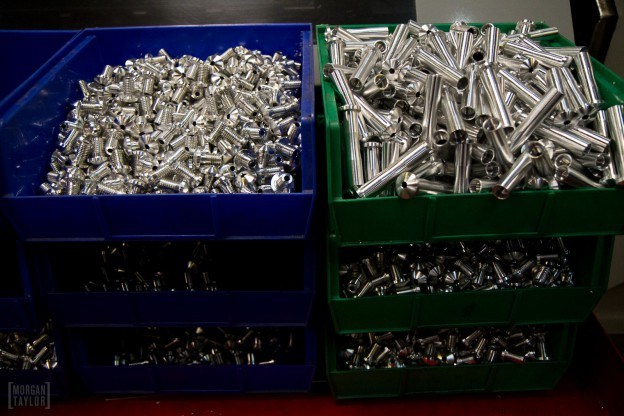 If it’s part of a frame, Intense makes it. 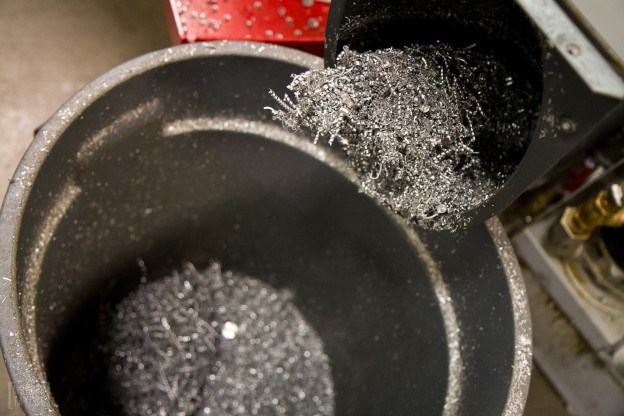 While all scrap aluminum – and you can be sure there’s a lot of it – is sent for recycling.

Herrick spoke passionately – at a media event surrounding this business announcement as well as a new bike on the horizon – about his decision to come on board at Intense. He stated that “truly authentic, unique, beautiful, focused brands are rare in our industry – and we need to embrace them”. What defines one of these unique companies? Herrick had five points:

It’s obvious that he counts Intense among these, and cited Santa Cruz, Yeti, and Ibis as other examples – all companies who have US roots, offshore carbon production, and yet still passionate followings. Under Herrick’s guidance, Intense is moving into a new stage, where product availability and service to the dealer and customer network is improved. 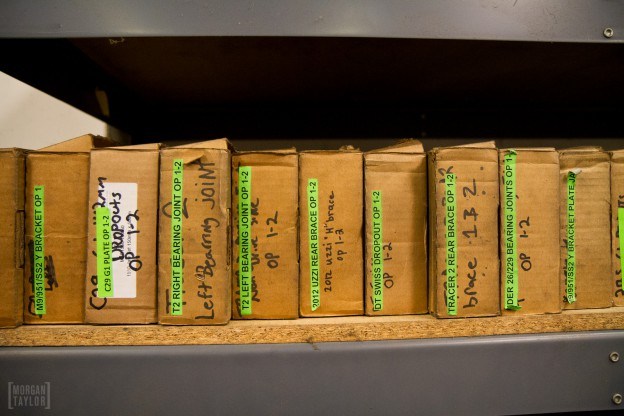 Parts and fixtures are located on rolling carts so they can be stored when not in use. 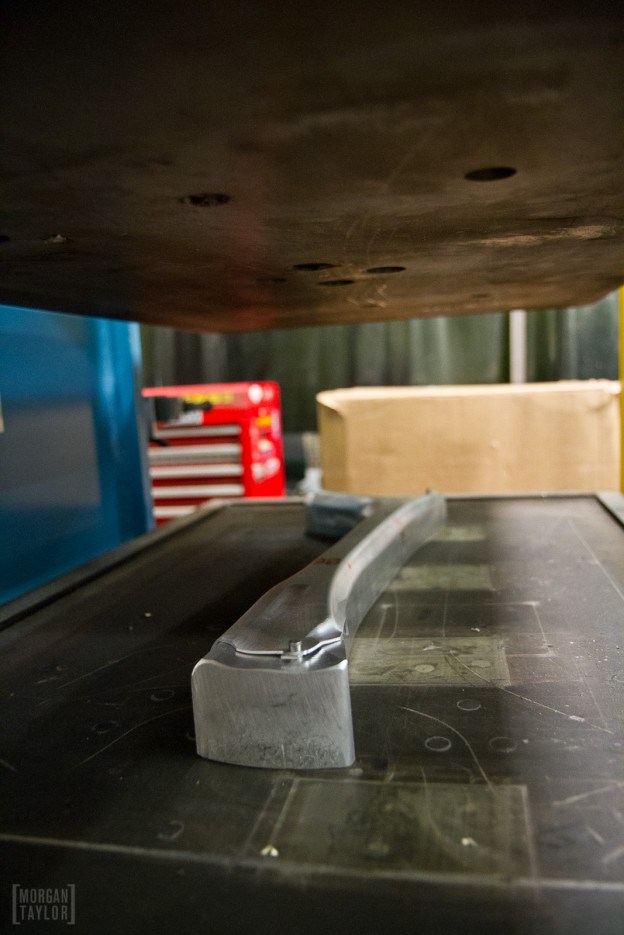 This massive press forms many of Intense’s unique tube shapes.

With Herrick at the helm, Steber can now have more freedom “to do what I am truly good at and inspired to do” – that is, design bikes. He’s happy to be the only licensee of Santa Cruz’s VPP technology – “what they have we have” – and works closely with them to ensure these bikes are up to both companies’ standards. 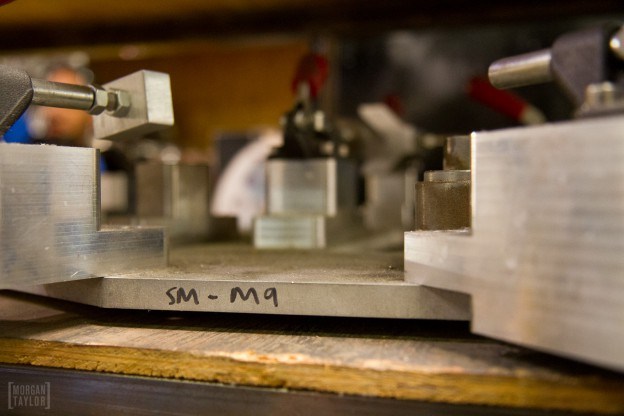 For every size of every bike, Intense uses a standalone fixture. This means every frame comes out of the factory exactly as intended. 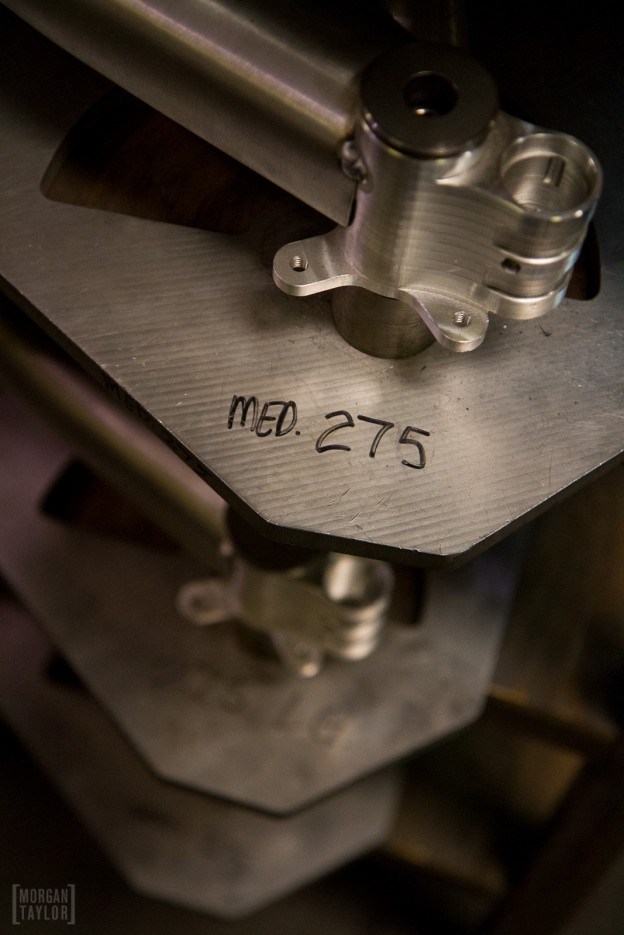 A partially welded front triangle sits in its jig.

What do these changes mean to the dealer and the end consumer? Customers can now expect that when Intense announces a new model, that it will be available on the shop floor immediately. Herrick brought up the example of a dealer having a customer in the shop, interested in a bike, but being told that the wait is weeks (or even months). That’s a lost sale.

The big message that came through is Intense Cycles is now a complete bike company rather than a frame manufacturer – going beyond “build to order” and into “ready to sell”. As of last year, Intense began selling complete bikes rather than frames with build kits. Bikes will arrive at the dealer assembled and tuned. This certainly steps things up a notch. 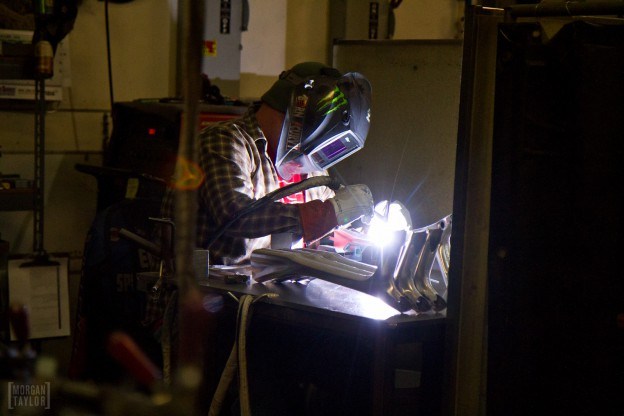 Each aluminum M9 frame requires 16 feet of welding. How’s that for a statistic? 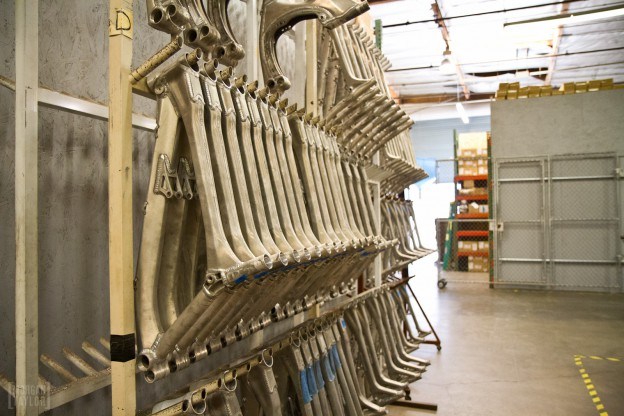 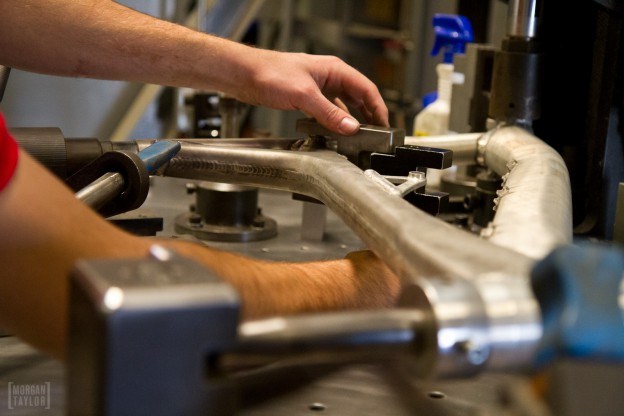 Each frame is aligned by hand after heat treating

Knowing that Steber has been pushing the envelope in mountain bikes for over 20 years, I wanted to get his thoughts on the topic of ever-changing standards. The majority of people out there will acknowledge that the only constant in this industry is change, but where they disagree is whether or not this is a good thing. 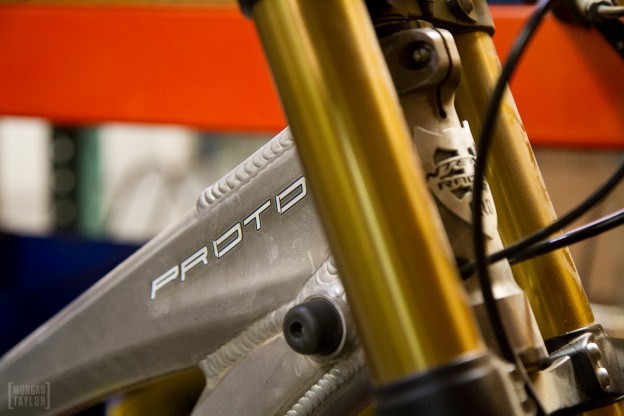 Surprises lurk around every corner in the Intense factory. 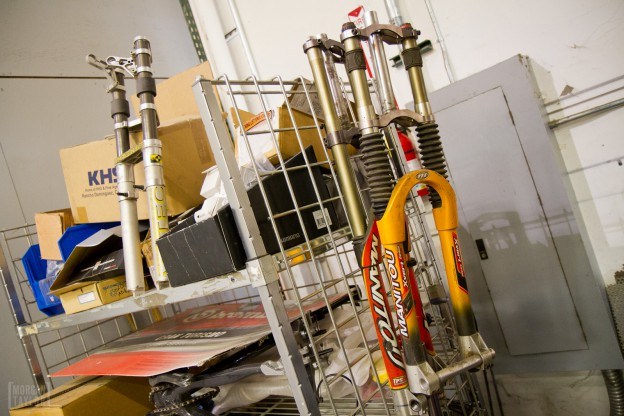 And there’s certainly no shortage of mountain bike relics.

The wheel size debate. It’s not really a debate any more. Steber saw 27.5” wheels years back as an opportunity to explore new options just like he had with suspension design in the ’90s. As it turned out, he was a forerunner to what has now become industry standard. Regarding this wholesale change Steber noted that “the industry kind of made up the consumer’s mind – but the plus side is it has stimulated sales.”

While this is a current hot topic, Steber was also wise to note that not all changes happen without consumer input: “Sometimes movements happen organically. For example, the 29er thing. The industry wasn’t supporting it but people were into it.” That’s pretty poignant, and lines up well with the timeline of how long it took 29ers to hit the mainstream. It took a long time before tire companies were fully on board. 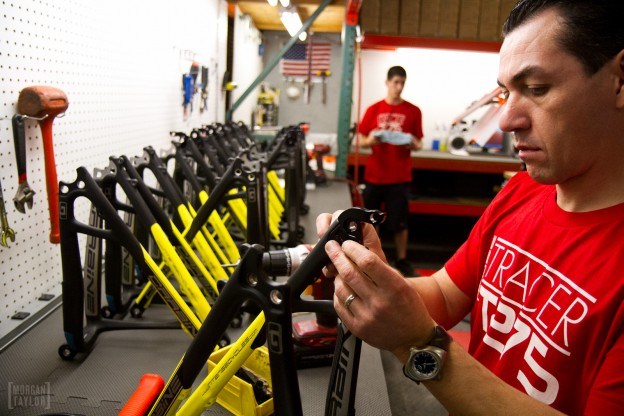 Finished frames are assembled by hand. 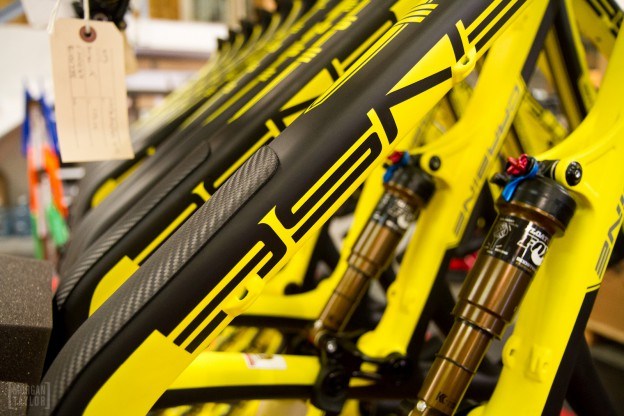 Carbon is a big part of Intense’s new business model.

On the topic of bike spec in general, Steber was optimistic about the options we’re given these days: “You can buy a bike that you wouldn’t change a thing on.” While we as the media can often find things to nitpick on complete builds, Steber and his new product manager Petersen will surely be endeavouring to get it right out of the box. 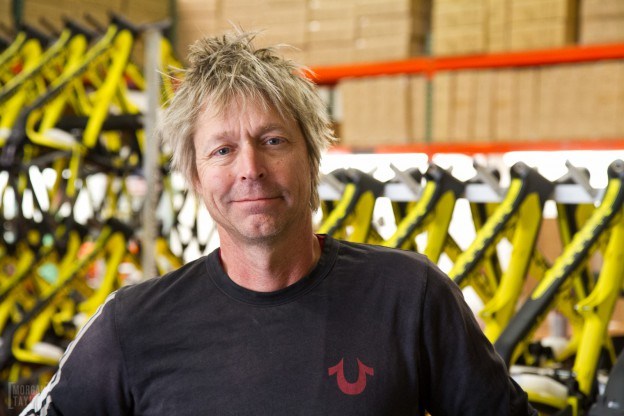 Before we got sidetracked on another tangent, we touched on the 1x drivetrain discussion. The front derailleur still allows a wider gear range, but rear end range is now hitting workable levels on its own. Steber is happy to note that “1x drivetrains have opened up a lot of possibilities”; this is somewhere we can expect to see more innovation in coming years. 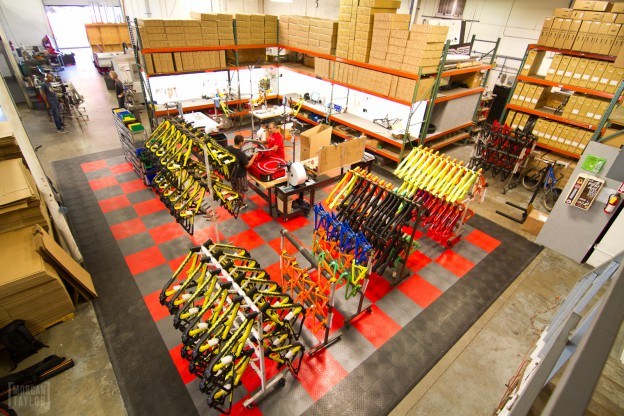 The relatively small facility pumps out a lot of bikes.

It would be misleading to publish a story about Intense in 2014 that focuses solely on Jeff Steber. In the past few months, Steber has solidified the team that will take his California-based company to the next phase in its history while retaining its made-in-USA credibility and appeal. Circling back to the topic of innovation and creation, Jeff’s happy with the moves at Intense: “I’ve always been a guy who makes things – this factory is very important.” He’s always had his hands in the dirt here, but now it’s time to dig in again.

I believe the caption underneath the image of the frame on the alignment table should read "Each frame is aligned by hand BEFORE heat treating."

rad floor matting in that factory!

Mmmm… Carbon M9 in the works?