The RockShox Deluxe and Super Deluxe rear shocks are new for 2017. These are recycled product names from the Colorado-born company’s deep past. A fresh start after a frustrating year for their top end Monarch Plus model. And they represent an awesome feeling system that maintains the beloved small bump feel and air spring support of DebonAir shocks while significantly improving heat management and bushing overlap.

There are two upper eyelet options for the new Deluxe and Super Deluxe shocks. The first, shown here on a carbon Transition, incorporates a pair of sealed cartridge bearings. The second uses a standard 12.7mm DU.

It’s time to look inside with my friend Jeff from Bikeroom. Invading SRAM’s workspace in North Vancouver to get the job done we’ll use their tools, drink their beer, decimate their pinball high scores, and ogle their vintage Chevy…

RockShox changed how riders think about air shocks when they released the DebonAir air can. The coil-like initial stroke, the smooth mid-stroke ramp, and finally the easily tunable end stroke felt superior to any other air shock on the shop floor. 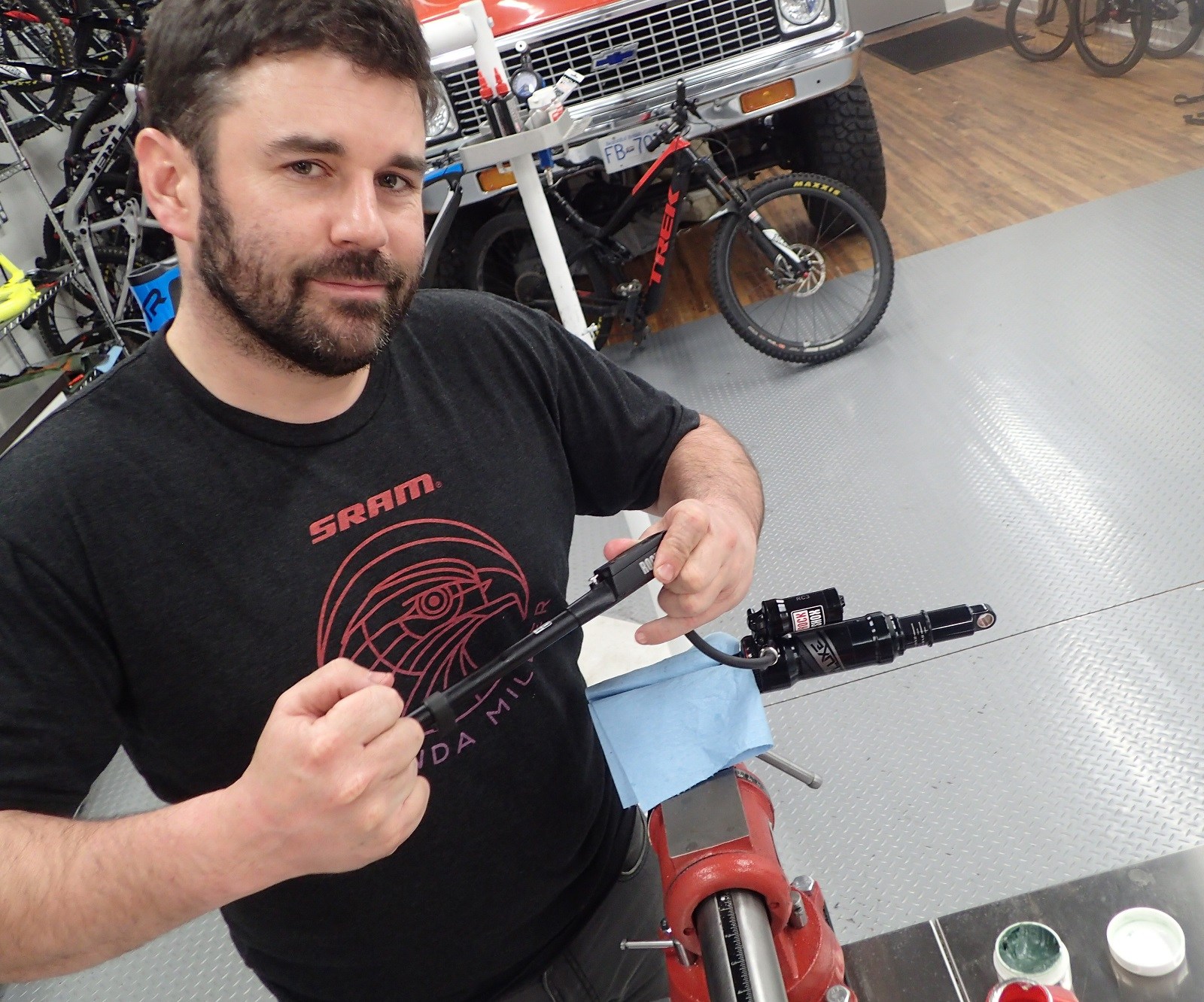 This Super Deluxe is out of the carbon Trek Remedy Jeff has been riding.

Among the various improvements featured with the new Super Deluxe, RockShox has taken aim at the two notable issues with the DebonAir.

Equipped with the dual air can DebonAir set-up and a generous helping of air can spacers (depending on the bike) the Monarch Plus feels great. The issue is that on long descents some riders experience an inconsistent feeling due to heat building up.

As my friend JamesOC says, it’s a bit like riding in a fur coat. 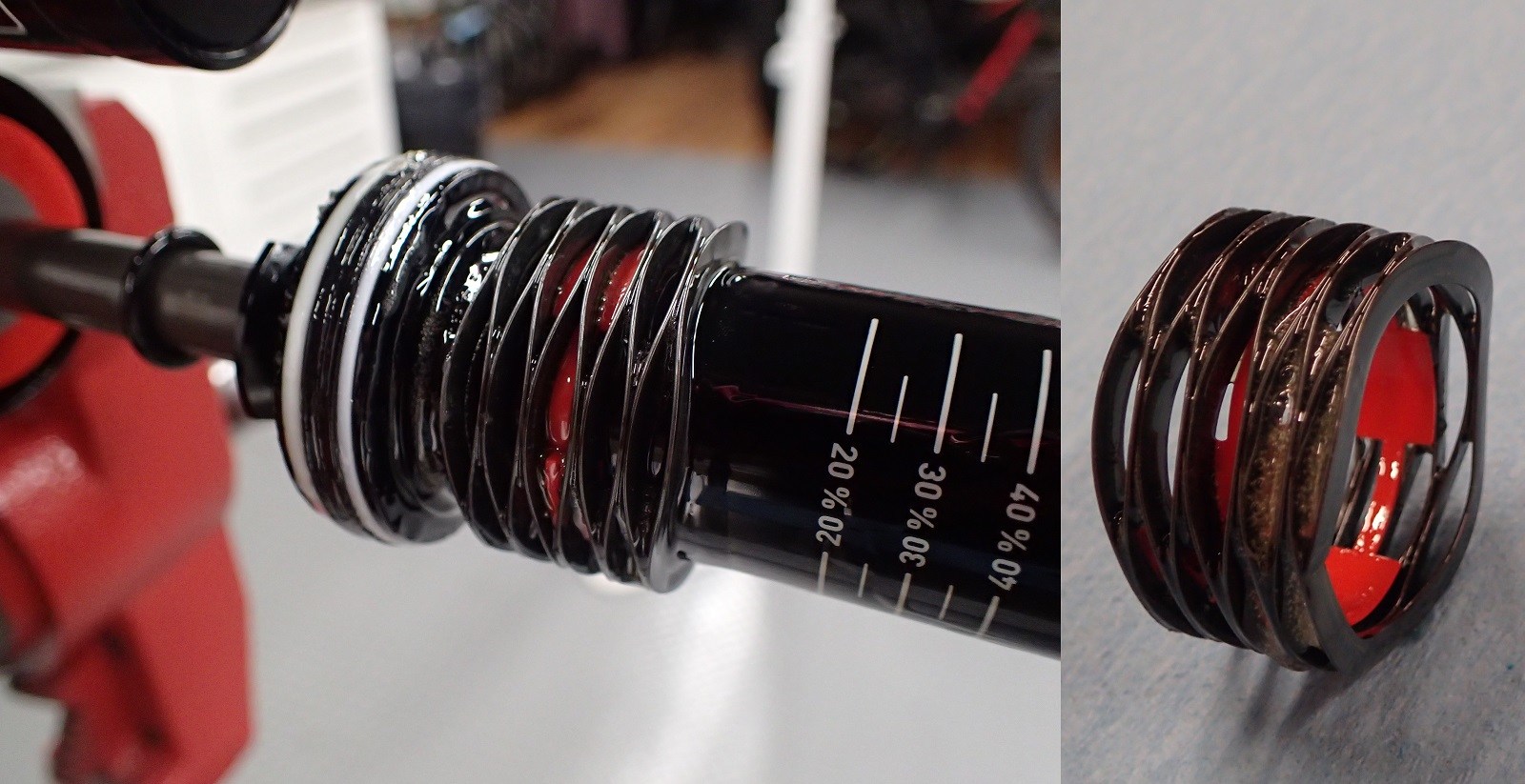 RockShox’s challenge? To achieve the initial performance of the DebonAir without the heat of the twin air can setup. RockShox’s solution is a lattice like coil negative spring they call Counter Measure.

RockShox’s challenge was to achieve that super smooth initialization of the DebonAir without the heat retaining twin air can setup. The answer is a lattice-like coil negative spring that sits on the body inside a standard air can.

RockShox has dubbed the spring ‘Counter Measure’ and it acts as a coil assist for the air negative spring to reduce the Super Deluxe’s initial breakaway friction. The very smooth off-the-top feel remains in a significantly simpler and literally cooler package. 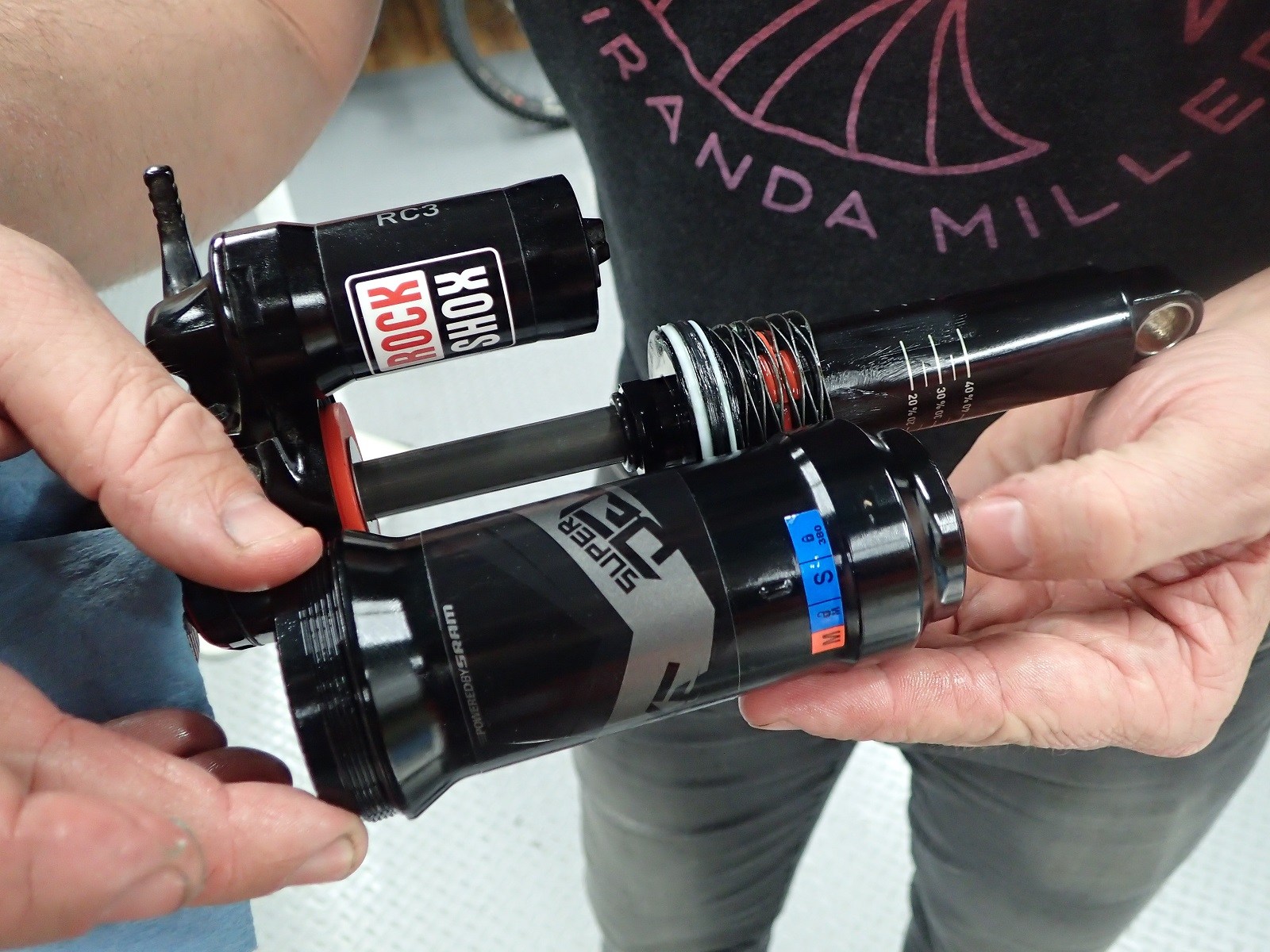 Another new feature of the Super Deluxe is a massive increase in bushing overlap. The shock body is better supported and is supported closer to its mid point.

I know lots of riders who are very happy with their properly lubed, Monarch Plus shocks with DebonAir cans. I also know a few who have had recurring issues with air leaks. My understanding is that RockShox has discovered that side loading of a shock’s body against the air seals is often the cause of this issue. This tendency is worse for some suspension designs than others and will also depend on the alignment of a specific frame.

The solution is a massive increase in bushing overlap so that the shock body is supported better and closer to its mid point. This should significantly reduce premature seal wear. 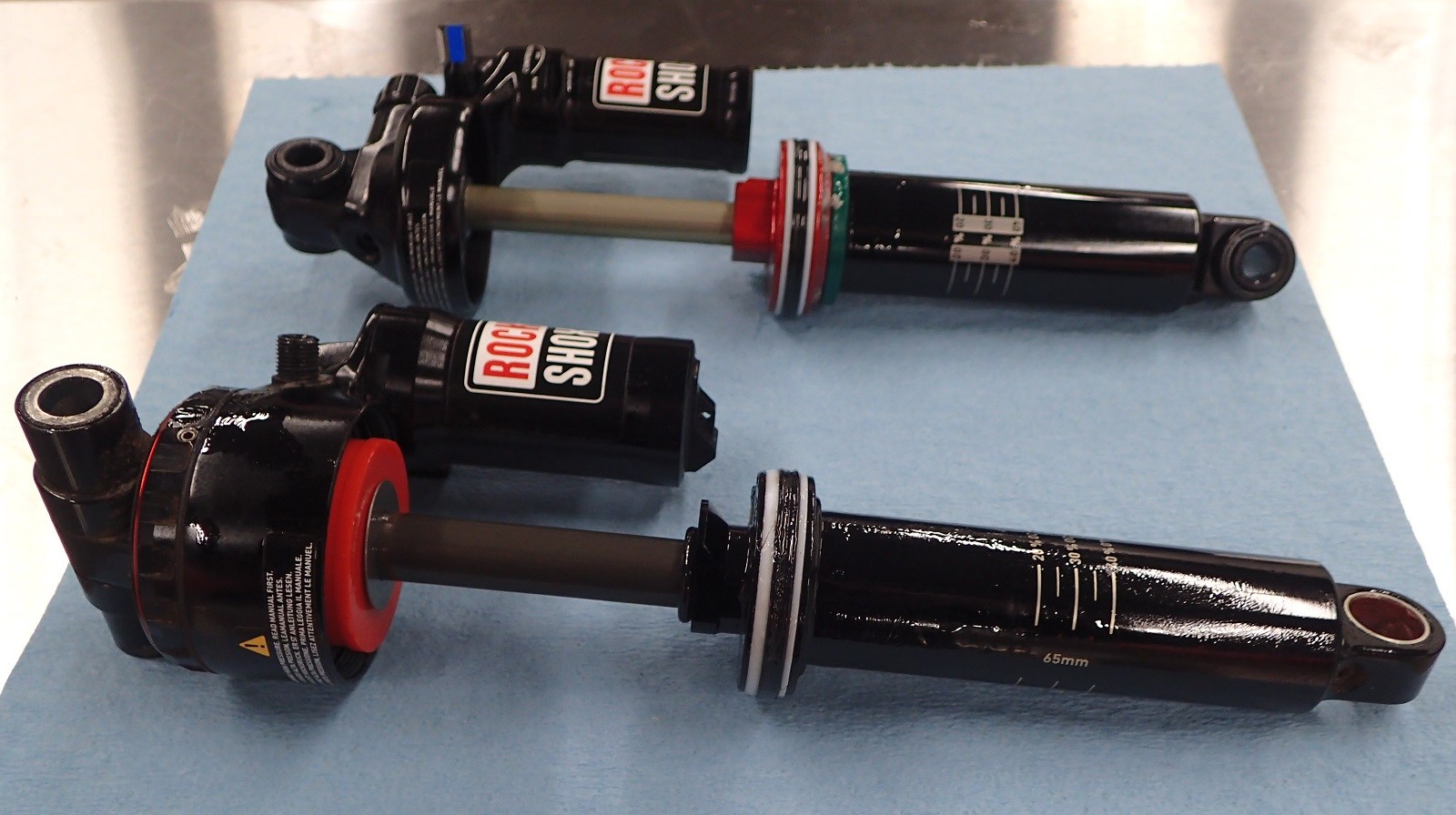 Another big difference between the Monarch Plus (rear) and Super Deluxe (front) is the size of the damper shaft and the corresponding fluid displacement. Both are significantly larger on the new Super Deluxe.

My favourite feature of the Super Deluxe is the rebound adjuster. Because it does something special? Nope, turn the knob for more or less rebound damping. I like the fit and finish of the big circlet of damping control. Easy to access on any suspension design and to adjust with gloves. It’s also well protected from crash damage and on-the-fly adjustment due to contact with water bottles or body parts.

Jeff likes to pull his off for a re-grease at the same time as he does a basic air can service. Grease keeps water out and helps keep the detentes feeling notable and consistent.

The Deluxe and Super Deluxe have a huge range of air volume adjustment. Massive. These shocks cover the entire volume range of all the Monarch and Monarch Plus options whilst only requiring the installation or removal of inexpensive spacers. No new air cans, eyelets, or other expensive parts.

With the air can empty of tokens, the Super Deluxe is a match for the most voluminous option for the Monarch Plus. For anyone keeping score that’s a combination of the Monarch’s high volume eyelet and high volume air can with no volume spacers.

At the opposite end of the spectrum is a Super Deluxe shock with the maximum number of tokens. This is a volume match for a Solo Air Monarch shock.

The Deluxe & Super Deluxe shocks have a huge range of volume adjustment via the uniquely shaped tokens.

RockShox wanted one token that would work with every eyelet configuration of the new shocks. Trunnion, Bearing, or Standard, which explains the unusual shape.

Working on a RockShox shock at home? Go green for lubrication.

RockShox PTFE based Dynamic Seal Grease is made in Spain for lubricating all the sliding parts. Postmark Brewing’s ISA  is “Bright, Tropical, and Lively” and not so potent as to affect the final outcome. 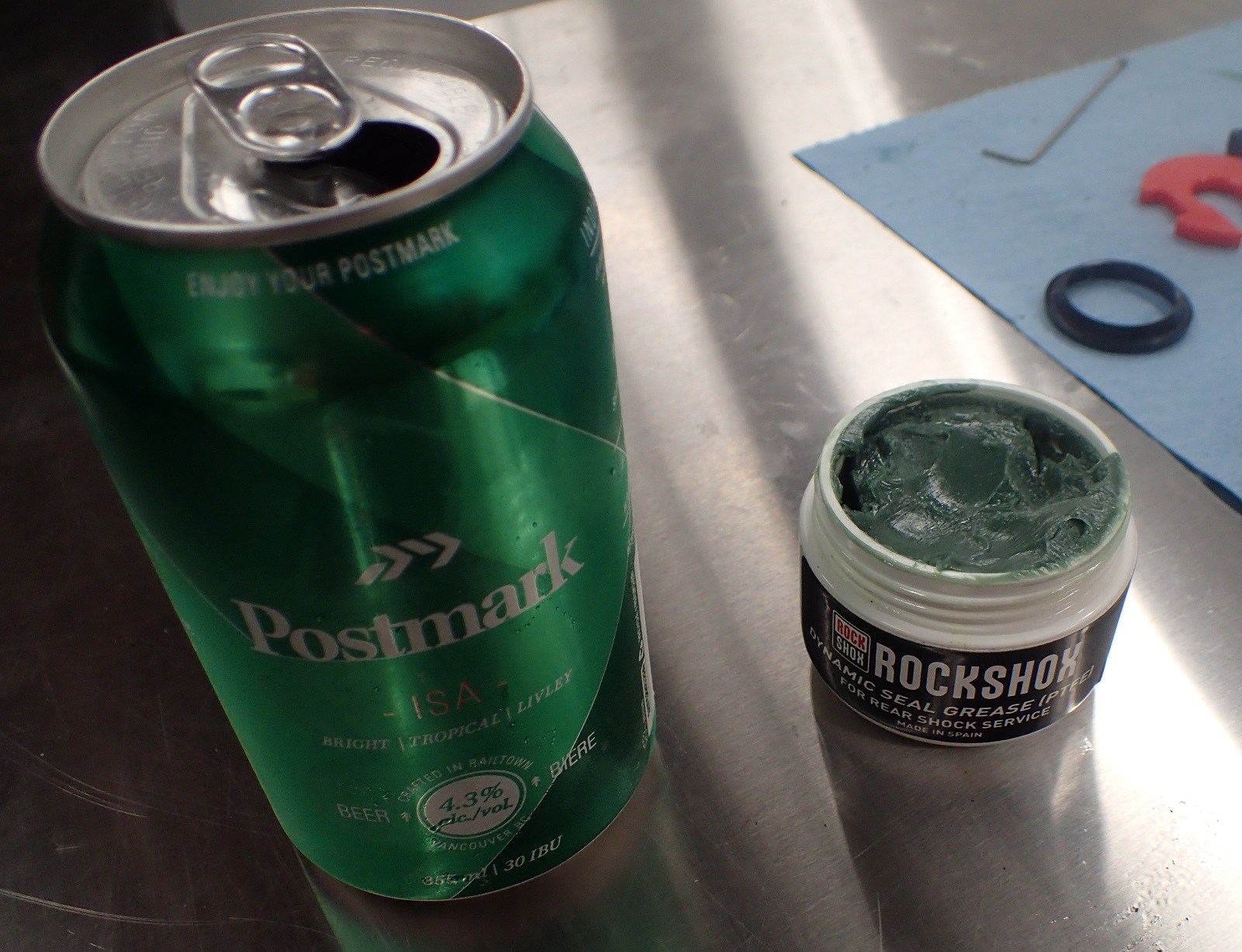 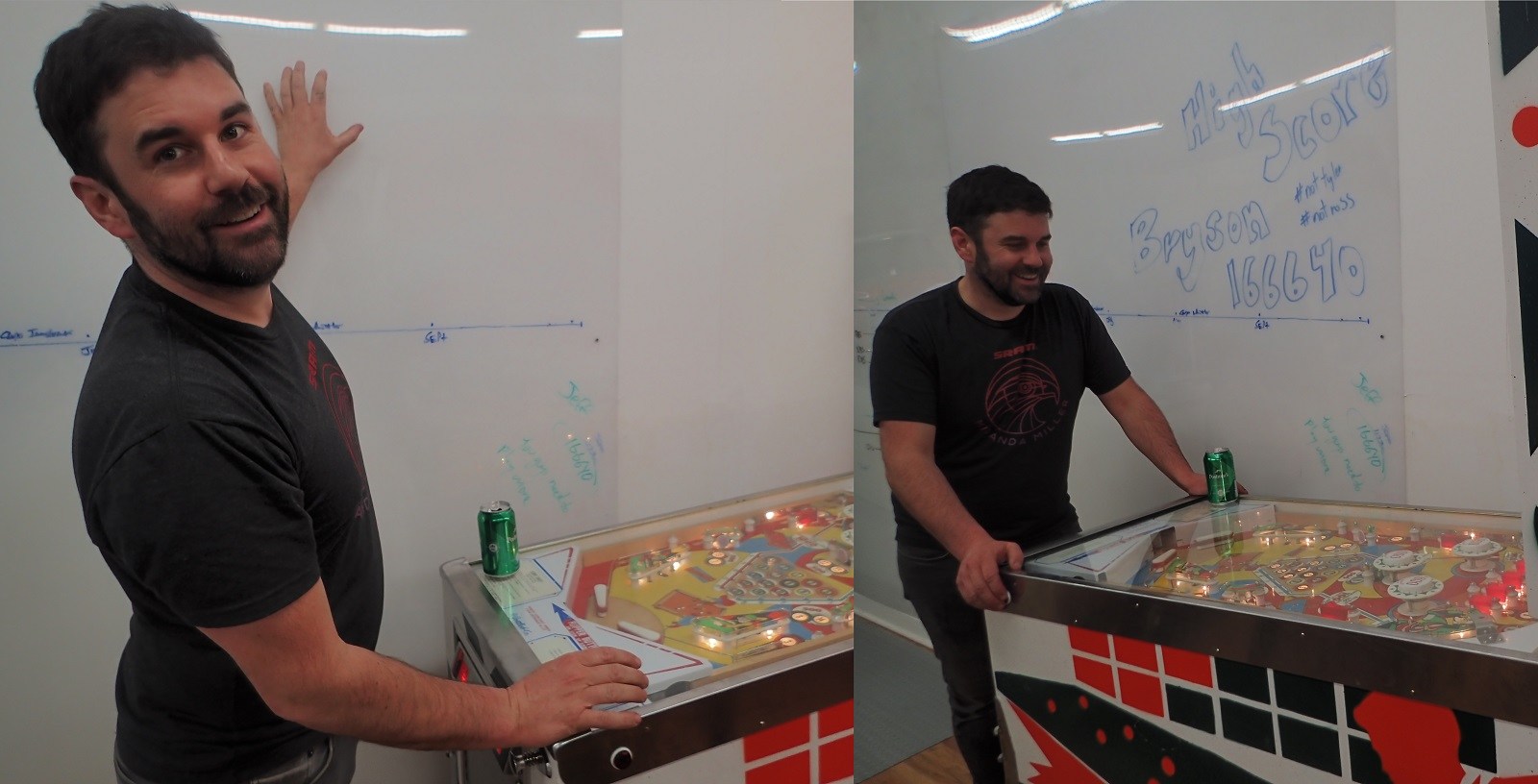 Jeff says “this is where I’m going to write my high score”. #nottyler & #notross.

I’m excited to get some hours on RockShox’s new rear suspension as to date Jeff has had a great experience with the Super Deluxe on the Remedy.

For all that is new, RockShox’s 2017 shocks maintain the high degree of user serviceability that made the Monarch Plus a popular choice among home mechanics. Interested in a full damper teardown? Please look for a follow up in the future.

Does anyone know the maximum number of volume spacers for the Super Deluxe RC3? 230mm x 57.5mm size shock.

There doesn't appear to be a maximum listed although it is obviously limited by the taper in the air can.

Max Air pressure is limited to 350psi or 275psi depending on the literature you read (best to go with the MAX listed on the air can).

Just got my Anthem Advance sx with RS super deluxe shock. I'm 165 lbs and its taking 250 or more psi to get shock to 30% sag. Called sram and their not sure what's going as shock is to new and they have no tech history yet. Have any idea what's going on? Perhaps a new seal kit and air can service would help?
Thanks

If it isn't leaking any air (i.e. if you're pumping it up to 250 and it's staying at 250) then it isn't an issue with the air seal kit. The first thing it to try another pump to make sure the gauge isn't broken on yours -- just to be certain.

If your pump is good and its holding air then my best guess would be a damper issue. Maybe not properly charged from the factory?

In any event I'm sure RockShox will take care of it ASAP under warranty?

***apologies for the delayed response; just saw your message.

Thank you, and I guess these higher volume shocks just really need much more psi to get in the right sag settings? Thanks again Drew

Any word on a remote for the compression switch for the Super Deluxe?

Nothing to date Matt.

I was surprised CaneCreek started offering remotes for their CS shocks this year. I've long heard rumblings of customer demand but it's hard to imagine many people - aside a very vocal minority? - wanting another cable going to their bar?

In my experience working in a suspension shop - not in Europe - 99% of inquiries regarding Fox shocks and remotes was for quotes to remove them in favour of manual controls.

That said, if you like remotes the hydraulic system on the Lefty/RockShox setup on Cannondale's Scalpels is pretty sweet. One button road mode.

I do love those Postmark ISAs. Probably my favourite beer overall.

Are these changes set to trickle down to the 'regular' Monarchs or are they strictly for the Super Deluxe metric line?

Retrofitting the increased bushing overlap wouldn't be easily doable (requires a longer body). I have a question out to SRAM re. retrofitting Counter Measures.

Counter Measures works with the Deluxe and Super Deluxe and Vivid Air shocks.

It's not compatible with Monarch/Monarch Plus.

Interesting design on the negative spring. I guess the goal is a similar result to Debonair without the need for a large volume negative air chamber? If they wanted to get rid of the dual air can, why wouldn't they just go to a single air can with a large negative chamber like the Fox Evol design, rather than bringing in the coil assist?

Are there versions with different negative spring configurations (equivalent to Debonair vs HV/standard Monarch cans), or just one version?

Thanks for walking us through the teardown.

My understanding - and I don't pretend to be an engineer or even play one on the internet - is that between the much larger air negative spring, the shape of the can, and the area taken up by volume spacers the EVOL air cans have issues with heat management compared to other Fox air cans as well? Especially combined with the RP23/CTD/DPS shocks which are amazing but contain very little oil. For the record, I think EVOL has made a ridiculously positive improvement to the performance of these shocks in many bikes -- I've just heard rumblings of issues regarding heat management.

There is still a negative air spring in the new Deluxe/Super Deluxe. Counter Measures just acts as an assist. So, the coil spring is, in my understanding, the same in all the shocks.

Not sure what exactly you're trying to accomplish by reducing the volume of the negative spring? It's really just there to get the shock moving and as it's self balancing the initial pressure will remain the same?

Anyways, SRAM recommends against inserting spacers into the negative air chamber on the DebonAir cans because of how the bypass and air pressure work together.

It is not an option on the Deluxe/Super Deluxe.

Maybe something to do with initial feel or mid-stroke that could be better accomplished through changes to the valving?