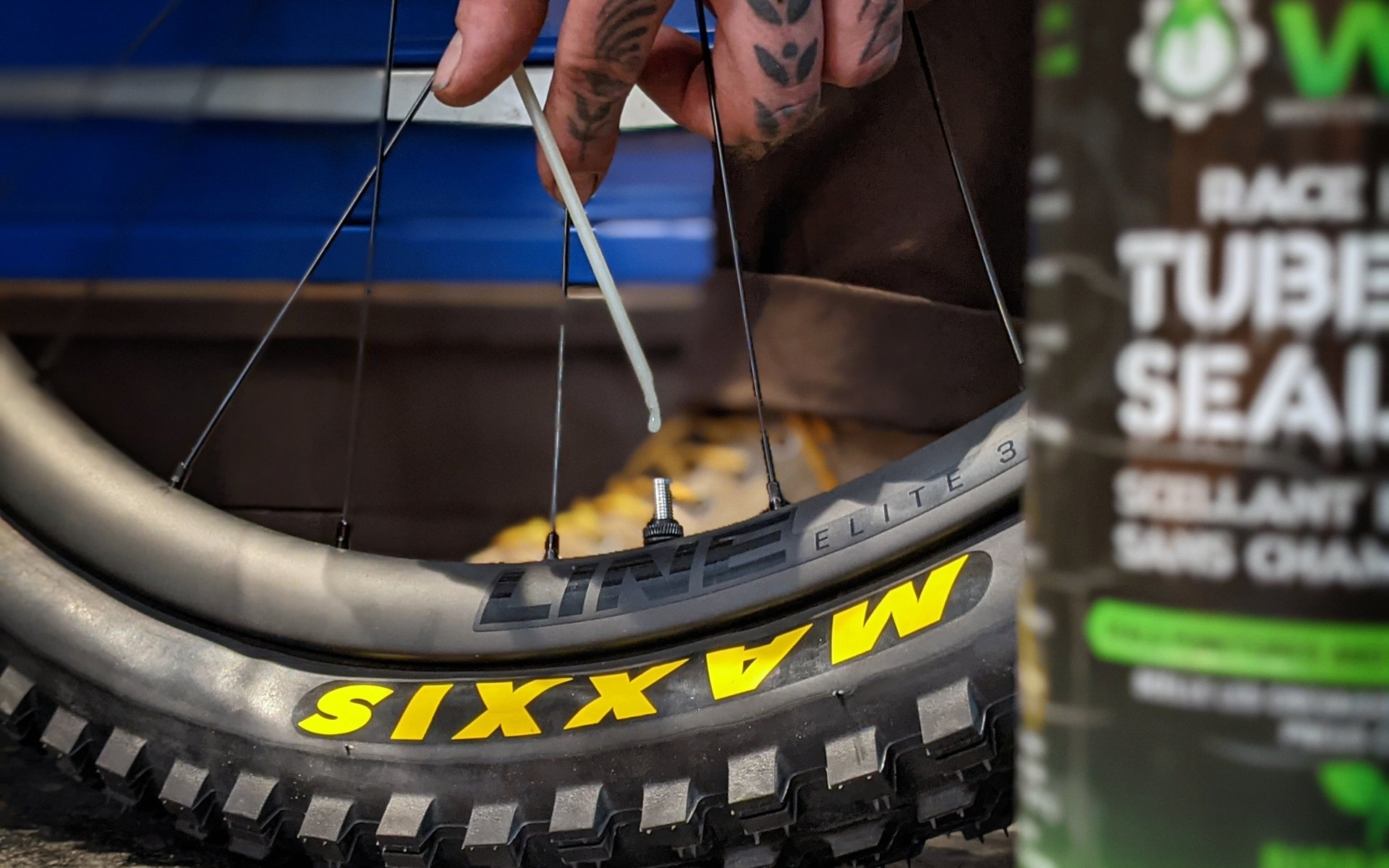 On the face of it, the premise behind tubeless sealant is as simple as blood clotting to seal a wound. Like cut skin, if a tire sustains damage, sealant is propelled towards the hole by the tire's escaping air pressure, and as long as the 'wound' isn't larger than the sealant's ability to clot and stop the loss of air, a new seal is established. Simple enough. But the inner workings of sealant are more interesting as well as more complex than that simple analogy.

The words latex and tubeless sealant are almost interchangeable, because latex has traditionally been both the best and pretty much only basis for sealant. Despite its ubiquity in most sealants, latex is not great stuff - it's not good for the environment, first of all, and it's a terrible allergen for some. Those two alone could be enough to condemn latex, but leaving them aside, latex also carries some performance deficiencies that really call its de facto dominance into doubt. Let's have a look at those.

Latex Issue #1 - it dries out
The latex used in most tubeless sealant is defined as a 'dispersion of polymers in water' and the main drawback of them is that they dry out in use - both in your tires and in your valves. This is annoying, but also means your sealant (and eventually your valve) becomes ineffective over time. It dries because as you ride, your sidewall flexes, exposing pores to the air outside, allowing the aqueous part of the sealant to escape.

Latex Issue #2 - it relies on a process similar to coagulation to work properly
Going back to our original analogy, latex works like blood to seal a tire's wound. That's fine, but larger wounds require help to seal - hence the use of additives in many sealants, like glitter, pepper or gluten. Some of these are harmful to the environment, but they all play havoc with your valves, reducing your valve's efficacy until it has to be replaced.

Latex Issue #3 - it won't work if it freezes
Once frozen, latex becomes unusable, so for use in cold temperatures, you need to use nasty chemicals like methanol to help it retain its liquidity. This is the same as with latex paint, which is unusable at freezing temps (below 0ºC or 32ºF).

It's common to see sealant seep through the sidewall of a new tire, and not surprising that our instinct is to think that's a bad thing. Sealant is supposed to seal that sidewall, so if it's coming through, it means the sidewall is not robust, right? Not exactly. Sidewall seepage happens because as you ride, your sidewall flexes, opening pores and letting the aqueous part of your sealant escape. This is your sealant doing its job - rushing to the rescue to plug a hole, or many small ones in this case - not a bad thing. However if too much sealant escapes, it accelerates the drying process on the inside of the tire, meaning you have to replace it or top it up more often (or in the worst case, being dried up and ineffective when you need it). Another thing: if the seeping sealant evaporates quickly and disappears from the sidewall, that means it's a volatile substance, (many sealants contain volatile, harmful substances like ammonia) whereas if it stays in place on your sidewall, it's not volatile (nor harmful). Sealant on the sidewall is not bad, and a quick wipe and it'll be gone - all the better if it's a safe substance you're wiping off of that surface. The volatile substance evaporates, making you think there's no problem, when in reality your sealant is literally evaporating into the air, losing its effectiveness and requiring shorter service intervals. 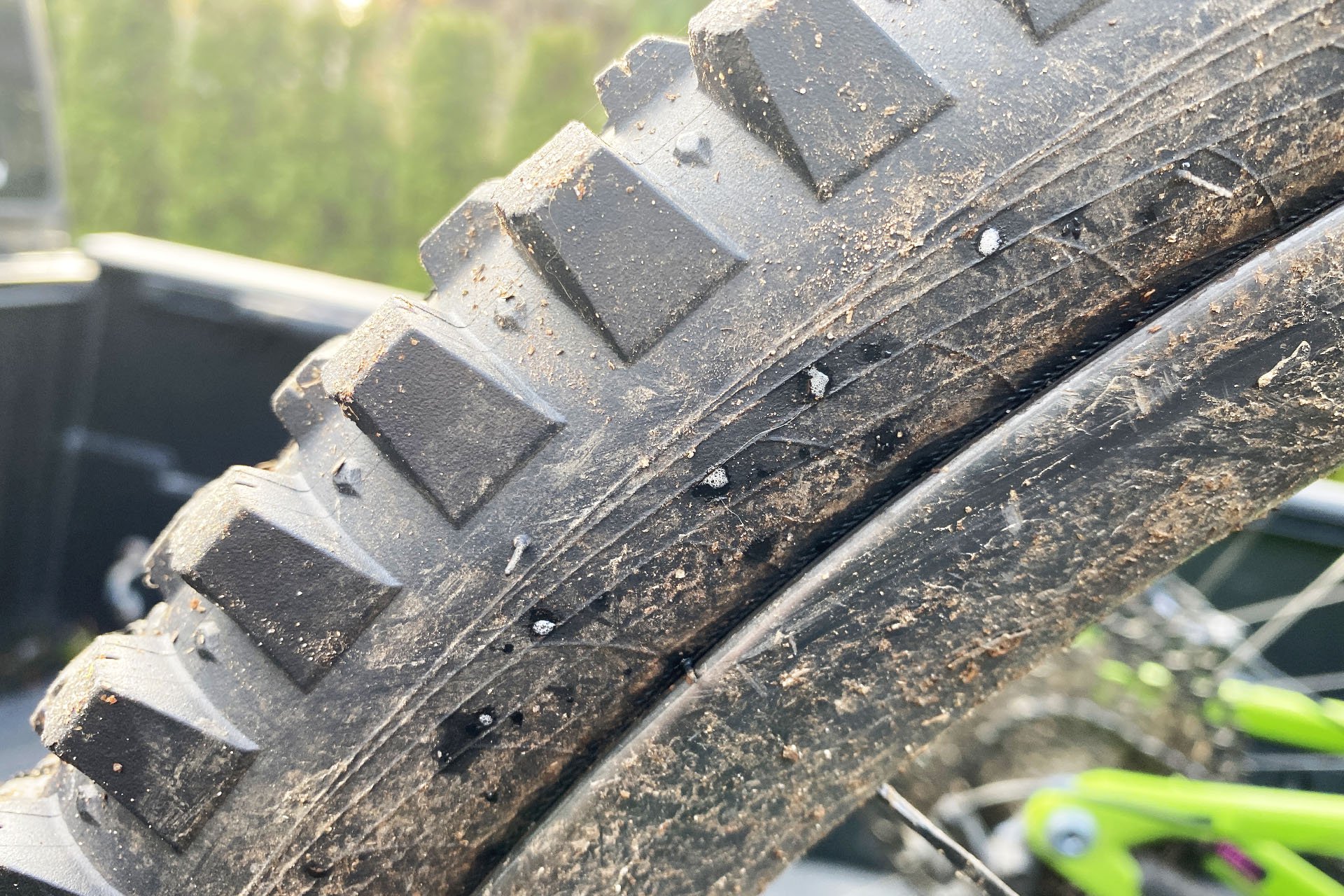 A bit of sealant in your sidewall isn't as bad as you think, especially if it's a non-volatile substance that doesn't dry out quickly (ie. not latex-based), so it'll seal the sidewall rather than causing it to dry out and need frequent replenishing.

Sealant should roll continuously in the tire - this allows it to coat the inside properly and respond to punctures more quickly, but there's an added reason for its importance: moisture preserves your tire's seal at the bead. The same concept applies to dishwashers: when used regularly, the dishwasher's seals stay moistened and effective, but if you don't use it for 6 months, the seals can dry out and no longer seal moisture properly.

Taken all together, we can understand both the way your sealant works keep your tires running well, and the various factors that affect its performance. It becomes clear that latex-based sealants are problematic, from both environmental and performance standpoints, even if they're the current standard to which we've become accustomed. 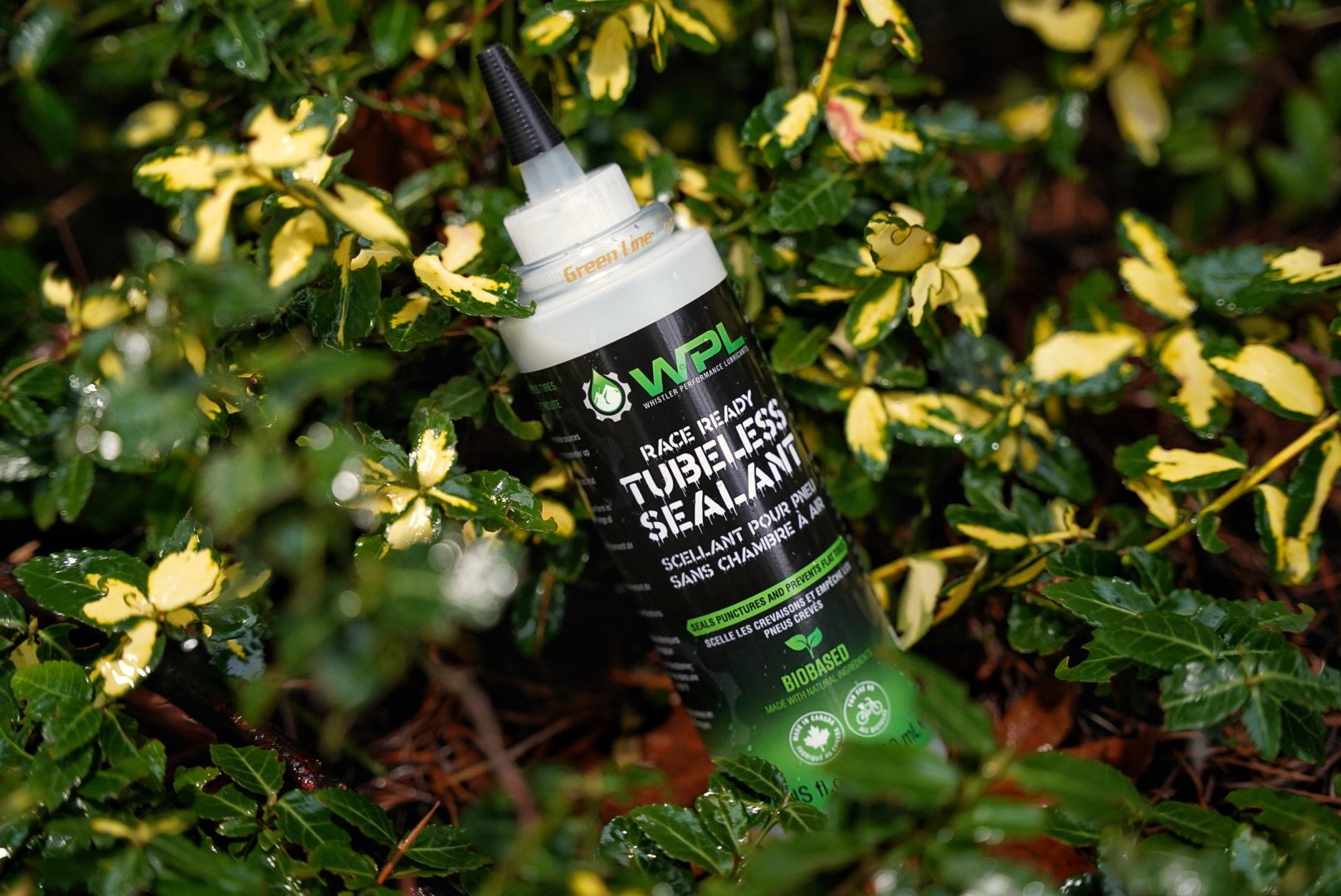 Whistler Performance Labs has a newly reformulated bio-based tubeless sealant that is designed to maintain its liquid form longer than latex-based sealants. To do that, WPL engineered a solution that is more like a gel than a liquid. It is water soluble (making it easy to clean off of your wheel and tire after installation or when changing tires) and not harmful to the environment. This is WPL's second iteration of their tubeless sealant - the first generation was effective as a sealant but occasionally not viscous enough, which sometimes made it difficult to install via a valve or less effective in cold weather. The new version addresses this, so now you can rely on it to last longer inside your tire than latex-based sealants, and keep your tires running at the pressure you expect, all while avoiding the use of toxic substances. Sometimes the bio-based solution is harder to perfect, but the results are well worth it in the end.

You can learn more about WPL's Race-Ready Sealant, as well as the rest of their 100% bio-based bike maintenance products at WPL's website.

The BC Bike Race Experience - Part 2

Good to see another good sealant available. I’ve used Stan’s I think since it came out. Kind of a gold standard. I tried an early Bontrager sealant. I think it was light blue. Worked fine but disappeared after a few months. The latest Bontrager is like Stan’s. I’ve tried Continental too. It was free at the last Cranworks which made it better. Tried slime in a road tubeless. Useless.

I've tried a few sealants that weren't Stan's and have been disappointed every time.  Has anyone tried this stuff?

I have been using WPL's sealant (2019-20 version, probably the previous one) since last year and it's been awesome. It feels like the sealant is a mixture of aloes vera and fine natural fibers. I haven't had any hole to seal though, and the only weeping I have experienced is because of E13's thin/porous tires (still no more loss of air than with a not-weeping Magic Mary last year).

The great thing when you change tires frequently is that you just run some water in your tire and the sealant 100% goes away in a few seconds without needing to brush it off or anything. I removed the Magic Mary I was riding last year, cleaned it and sold it. It looked like it never had any sealant in it. My Cushcore did not ingress any ml of it either, and nothing stuck on it.

I used the 2nd half of my '19-20 bottle this summer and I bought a new bottle in May of 2021 direct from WPL. Anyone knows when the "improved" formula started to be sold ?

I'm curious about trying the WPL stuff. Stan's was just OK before inserts, but now creates MASSIVE stanimals. Orange Seal seals better than Stan's but clogs valves and also builds big stanimals with inserts. The (what I assume is) plastic glitter in Orange Seal bugs me.

WPL will be the next one I try. Hoping it seals well and plays nice with inserts.

Absolutely no Stanimals with Cushcore and the WPL sealant. It keeps it texture forever (at least a year so far) and washes off like nothing happened if you ever replace your tire/insert. Like I said, I haven't had holes or cuts to fill, but as far as general sealing, I just have great things to say about WPL sealant. Btw, I'm not affiliated with them haha! But so far, I just don't see how a sealant can be better than theirs in any way.

Isn't latex bio-based? It comes from rubber trees. That isn't to say the rest of a given formula is enviro-friendly, but this is the first time I've heard that "latex is not good for the environment" or that there is an alternative to natural rubber that is better for the environment.

It's called greenwashing. As Mammal says above, latex sealants contain ammonia or other anticoagulation agent. But I've been using a Chinese alternative, marketed towards the car segment, which is water based, with rubber pulps of variated sizes, and works by clogging the punctures just as well as the latex based alternatives.

"Rubber pulps" and "latex pulps" are synonymous. Natural rubber = latex. Companies may add other things to their formula that are not good for the environment, but I'm questioning the specific claim that latex itself is bad ("latex is not great stuff - it's not good for the environment"). That just doesn't check out, and I think either the article or WPL needs to describe what material would be more environmentally friendly than latex, because I can't think of one. Latex is biodegradeable and just made from boiled tree sap. It's practically chewy maple syrup!

Latex is commonly synthetic and made from petrochemicals

Is Stan’s sealant bad for the environment? I have been using it since it came onto the market. It washes away with water and I don’t seem to have any valve stem issues.

It contains ammonia that is harmful.

Is it synethetic latex or natural rubber latex? 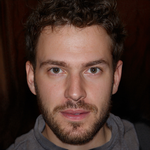 This whole environmental problem is bizarre, latex-based sealants decompose perfectly in the air, and given the trends of the world, there are very few substances harmful to the environment in their new products. Therefore, I see no reason to argue that this solution is better than the others purely on this point.

Is there a shelf life after it is opened the first time and exposed to oxygen?