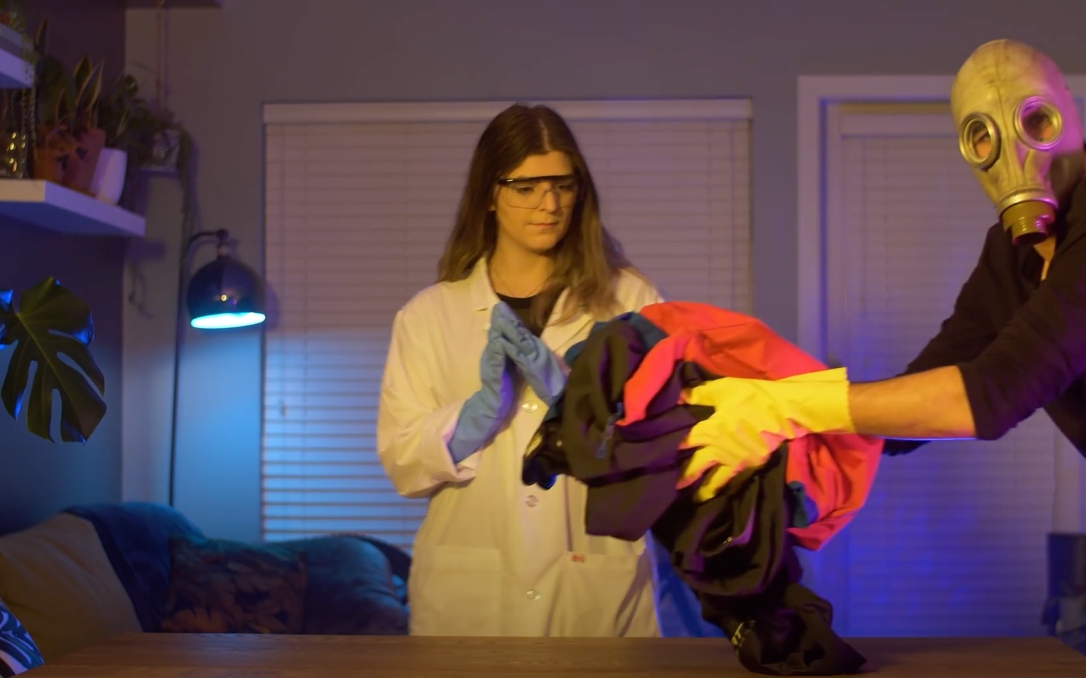 VIDEO by MAHALO MY DUDE

If you grew up playing hockey, this is all old hat to you. To some, the familiar smell of a dressing room is as much a part of the game as perfecting your chirp, the cellies that accompany a bar-down beauty*, or a couple of cold ones sometime after midnight in a desolate rink somewhere when it's -25 outside. In April.

Ahhh, that intoxicating whiff indicating a space used by thousand of players over the years to dress, undress, celebrate and commiserate...that's bacteria (among other things) and, until recently, it may have seemed like hockey players had a monopoly on that kind of odiferous malfeasance. Then came mountain biking and our gear, which is similar in use and stench to hockey gear. Many of us never thought to clean it, beyond a casual spritz with the hose after a muddy day. But little by little, a wrinkled nose here and there turned to disgust and outright objection, and soon those funky pads, helmets, gloves, and shoes were banished from the house. And still many of us refused to properly clean them. At one point a buddy of mine (obviously once a hockey player) wore all of his riding gear into the shower (helmet, body armour, gloves, leg pads, and shoes) and went through his whole routine, shampoo, conditioner, soap, and all. By the time his gear was dry, it smelled worse than when he went in.

The last straw is usually the first shuttle or gondola ride of the season. A dressing room is one thing, but that is a cavernous space compared to the backseat of a Tacoma. Worst of all, that smell isn't just surface stink. What's causing that smell is bacteria, sweat, and body oils. You really need to clean it every now and then, and not just for the sake of everyone within 20 feet of you.

*Highly specific hockey lingo - for a further education, refer to all things Letterkenny.

Here's the text and instructions according to our friends at Mahalo My Dude. We'll definitely be trying this one out and reporting back.

What’s really inside your clean gear? You ever smell your clothes and gear after it’s been in the wash and it’s still dank AF? And it seems darn near impossible to get it smelling fresh again? Follow these steps, your gear will be FRESH and FREE from a gnarly build up of bacteria, sweat, oils, laundry detergent. It's time to strip with Andrew and Brodie!

Soak your gear in HOT water with the following ingredients 4-6 hours stirring once each hour. Make sure you separate your lights & darks. This can be used for pretty much any kind of clothing, sheets, gear, blankets, etc...

Yes, but you still can't buy merino-lined knee pads or shoes or helmet pads. Also, the merino riding gloves I've used so far haven't held up well. So, always merino for apparel but it's the other stuff (in my case, the knee pads) that create bacteria-driven smells that bring water to eyes and scorch nose hairs.

I must be the outlier because my gear doesn't smell. Because I wash it regularly.

Borax Is for real. You should definitely be using that regularly for all your athletic gear. Definitely wash you pads and gloves occasionally too. In the summer I leave my gloves, shoes and pads out In the sun after use and wash them often.

My gloves never do either, actually, and I only wash them when they get muddy.

Sunlight/UV is so good. I confess I didn't really dive into this nearly as deep as I could have - it was more about framing context for the video, which I thought was good, funny, short, and important for all times, but esp now when we all have a little more time for maintenance and cleanliness.

Borax is on the shopping list, though, so I can try this.

Re: shoes, through the wet months using a shoe dryer does wonders for keeping them odour-free. In the summer, no chance, especially since leather riding shoes are so rare now.

Chamois is the "there's no merino option" choke point for me; I don't wear kneepads much (Its dumb. I'm aware.)

I have *super* sweaty hands but my gloves don't get very ripe? I just wash 'em with everything else.

My pads, helmet with liners, gloves if they get really bad after washing - get sprayed with water+white vinegar+ teatree oil then with luck, laid out for the UV rays from the sun to kill the remaining colony.

When it's carpet bombing time, put 'em all in a ziplock bag and fill with Isopropyl Alcohol. And then in the freezer. The colour of the IPA afterwards from my gloves was revolting

I like the natural ingredients angle, Dan. Like I said above, I didn't dive in nearly as deep as I could, but might have to organize a little head to head: the ingredients and method in the vid above vs what you've listed here...can you share the ratio you use of water, vinegar, and tea tree oil?

Some of my merino stinks, although a crap ton less than my synthetic gear.

I guess there is an upside to riding in poison oak. You clean everything post-ride or pay the consequences.

Amen to that here in Southern Oregon.

I’ll have to try this and compare to my go-to: mouthwash. Kills the stink-producing bacteria and leaves your gear smelling minty fresh. Just a regular wash cycle. Works a charm.

Well, I'll be damned. Never heard of that before.

I’ve been lucky with my gear, tend to wash everything quickly post ride return to home.

I used to wash my pads every couple of weeks but then I read that D3O shouldn’t be washed more than a certain number of times of it stops working. Anyone else seen this? I can’t find where I read that but it could have been on Race Face’s site as those are the pads I use.

I'll put it to RF and reply here.

The problem with this is that most technical gear, like pads, are made with neoprene and impact hardening foam. Neither of which can be washed hot.

If the pad itself is removable, your options increase, you can then wash the ‘sleeve’ frequently (at a temperature low enough not to damage it), so it doesn’t build up the deep skin/oil/ bacterial/mold/yeast culture

And then you can wash the pad it self with some (dish)soap, and dry it.

I should ask, what temperature is ‘HOT’? In a washing machine labeling sense, that is something like 60C/140F

For my gear a little old school Ammonia, mixed in with the detergent, gets rid of the funk. Especially in those synthetic jerseys that seem to have a hidden storage of that baked in 3 hour sweaty ride followed by beers and the eventual return home 5hrs later, the superfunk marinade in the bottom of the clothes hamper before the eventual laundry day...