If you missed part I of Seb’s History of the North Shore click here to read about the birth of riding in Deep Cove.

At the time most riding was done on skidder roads or in some cases hiking trails like the Baden Powell (broken up into sections which make up a 48 KM traverse from Deep Cove to Horseshoe Bay) or Old Buck on Seymour. The trails were rough by the standards of the day but towards the latter half of the 80s riders were looking for more adventurous trails. As well as the main hiking arteries there were a number of informal spurs trodden on by hikers wishing to access the higher elevations. Severed Dick (formally known as Good Samaritan) was one such trail and it was soon adopted by the bikers. It still is a rowdy line but back then it must have been atrocious to try and ride on fully rigid bikes with U-Brakes and bubble tires. This trail marked the start of something entirely different from the California scene and where the baton of progress was picked up by a different crew entirely.

“All the Cove boys were much older than us so we didn’t know what they were up to. So I would get hiking books and figure out where the trails were. It took a long time till I realized that Chaz and the Cove boys were riding more on double track, like road riding. I was trying to ride all these hairy hiking trails thinking that’s what the Cove boys were doing, but they weren’t.” Johnny Smoke recalls feeling even more isolated from his home crew than he thought. Then one day around 1991, while out riding on Seymour, the crew stumbled on a group of guys who had a similar outlook. The crew consisted of ‘Mountain Bike Mike’ MacGregor, Todd ‘Digger’ Fiander and ‘Dangerous’ Dan Cowan. They were from across the Lynn Valley watershed and their home mountain was Fromme to the west. Unbeknownst to either party, there had been parallel pioneering going on. 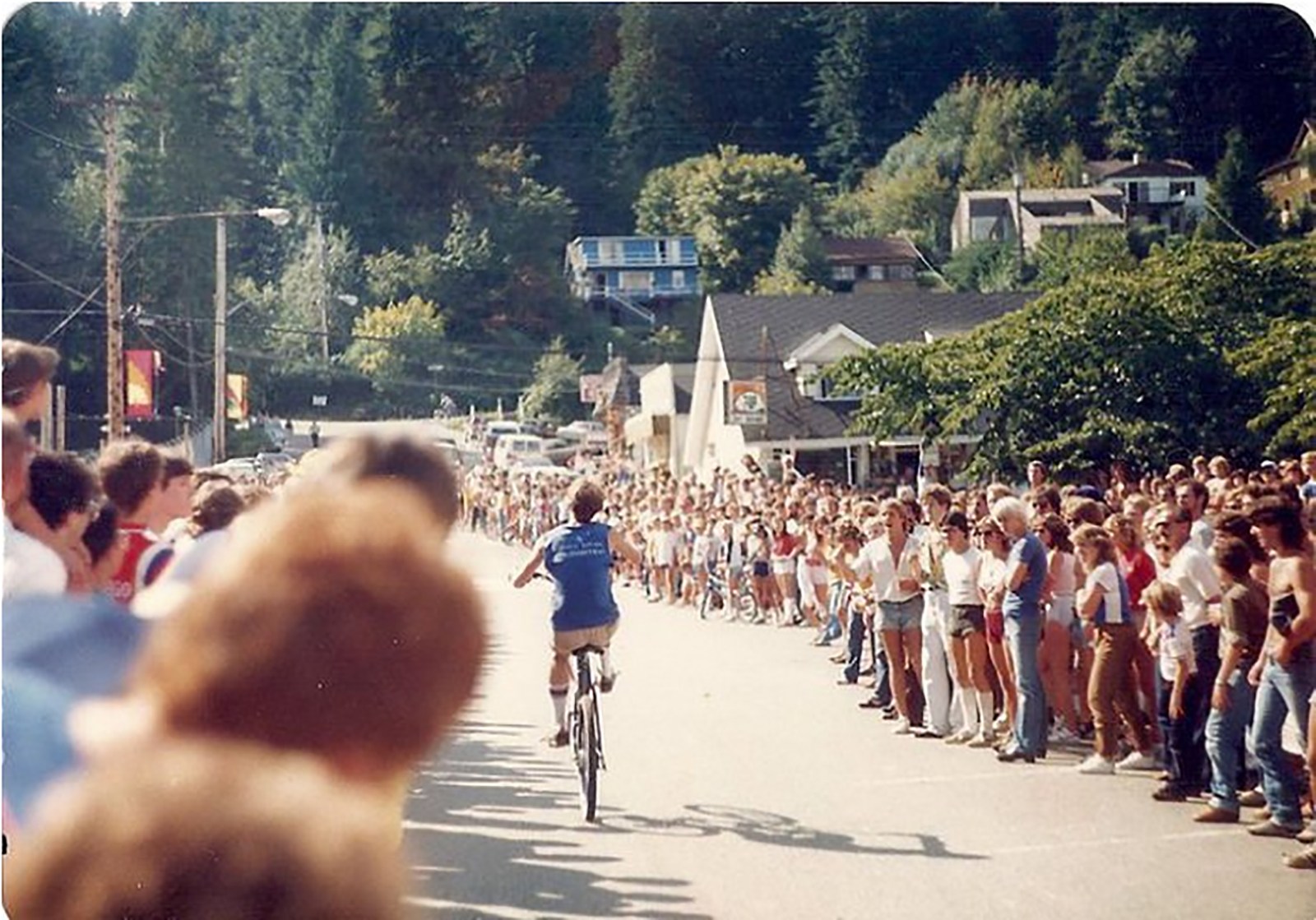 Jim Leppard, more familiar with the riding and riders on Fromme, remembers: “There were lots of cliques. Deep Cove on Seymour had their own identity and they were ahead in many respects but we never saw Deep Cove because they were so far away.” Deep Cove to Lynn Valley (the community at the base of Fromme) takes ten minutes by car these days but in the 80s the transport network was still haphazard. A ride to and from Deep Cove by way of the Baden Powell trail could be an all day affair so these groups had remained isolated.

On Fromme (often referred to as Grouse mountain because of its proximity to the ski resort of that name) things were brewing. They had grown restless of winding up the forestry tracks then across and down hiking trails so they began to carve their own not-so-cheap thrills.

Ross Kirkwood had collaborated with Brian Ford to build Kirkford, and then moved onto building Griffin and later, 7th Secret. Mountain Bike Mike and Goat Legs Gabe had explored all the mountain roads before scratching ludicrous descents like GMG. Jim Leppard had begun to explore his own lines and started out on Oilcan but at the time knew nothing of the other riders who were laying down the infrastructure. “I didn’t really know other people. I think I met the guys who built Pipeline once, but I can’t be sure. I just saw some guys with tools in the distance.” Part of this was due to the Secret Trail Society whose mandate was to “keep trails hidden and the location of the trailheads passed on.” The goods were sub rosa. 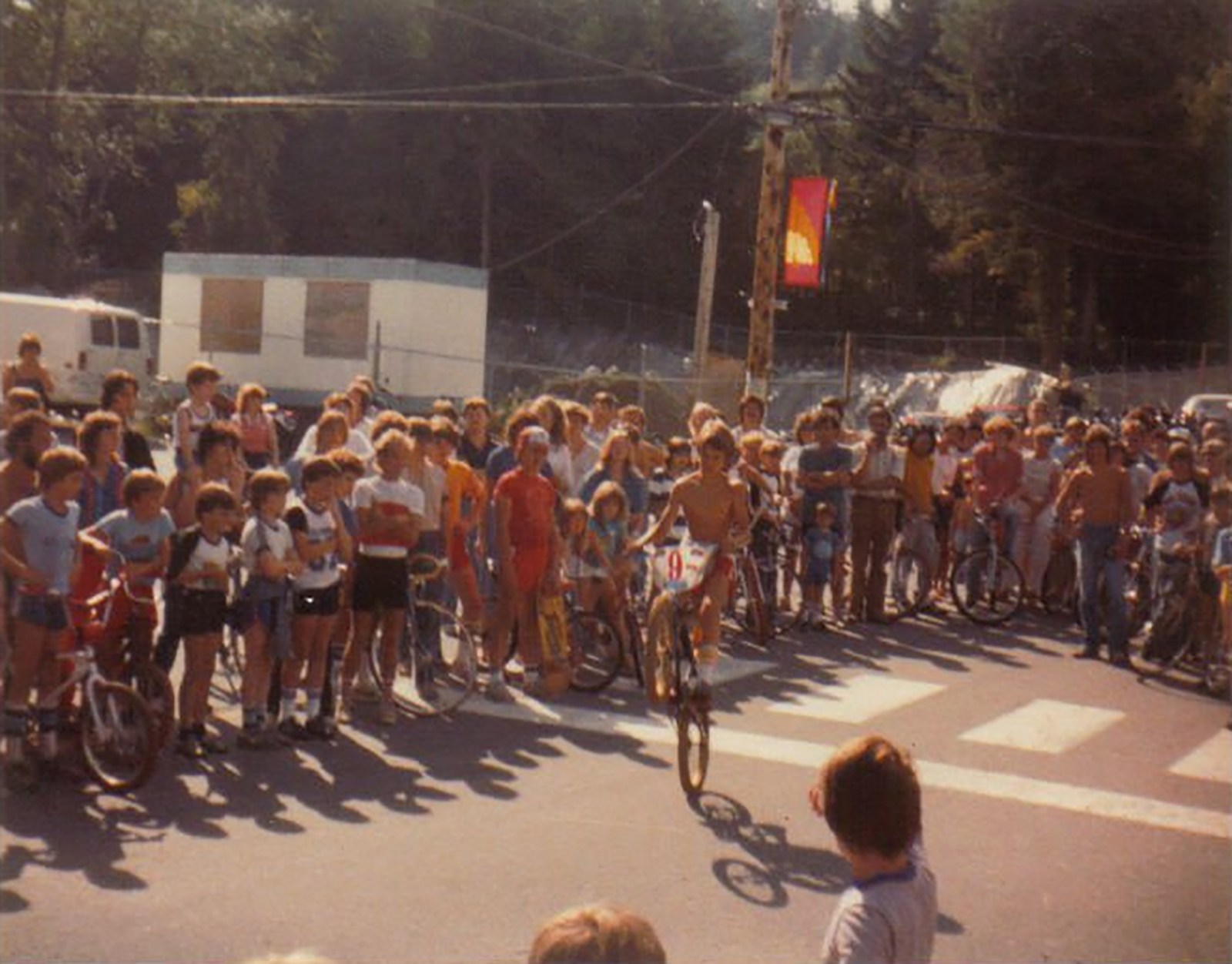 At the time one particular man became addicted to putting his hands in the dirt and would perhaps become the most key person to putting the North Vancouver trails on the map. But there were a few decisive moments of providence between then and now. Todd Fiander (more widely known as Digger for reasons that will become obvious) was a young guy with a passion for these new bikes. Throughout the 80s he and his chumleys (his phrase for his riding pals) would explore all the hiking trails, but there were always parts that were unrideable so he carved little reroutes. Then over on Brothers Creek road (an area of old growth forest on Cypress mountain) he made short sections of trail between the switchbacks. These detours and short cuts were pretty primitive, nothing more than fall line on the soft forgiving loam.

It was early freeriding before there was even such a thing. Corridors were cleared in the forest undergrowth and riders would skim downhill amongst the wood pillars. But it was the next trail that Digger helped work on, The BIG I, that the North Shore’s greatest and most startling innovation was laid.

While kicking foliage out of the way for this trail to pass Digger stumbled upon a rough cedar plank six inches wide by about ten feet long and placed it over a divot that was about three feet deep. This was the very first ‘stunt’ ever to be put on a trail and the effect it had got everyone hooked. “You were only three feet off the ground and there was a bank on either side to catch you, but it was the scariest thing. We freaked out every time we rode over it, but it wasn’t much.” Digger enthuses. Now riding these off-road bikes was not just for traveling to far off places, but as machines of thrill and danger.

It was around this time that the steep and deep mantra of the local powder skiing fraternity took hold. Rock faces were linked together to make a sequence of challenging moves down terrifying chutes or up and over hideous granite slabs. Trails like GMG, Expresso and Grannies started to explore the radical nature of the terrain. They slithered over and around the forest detritus, staking claim to the gnarliest of bits and taking the path of least resistance. This was far removed from the Californian style of plaid jacket clunking or Lycra-clad mountain bike racing. 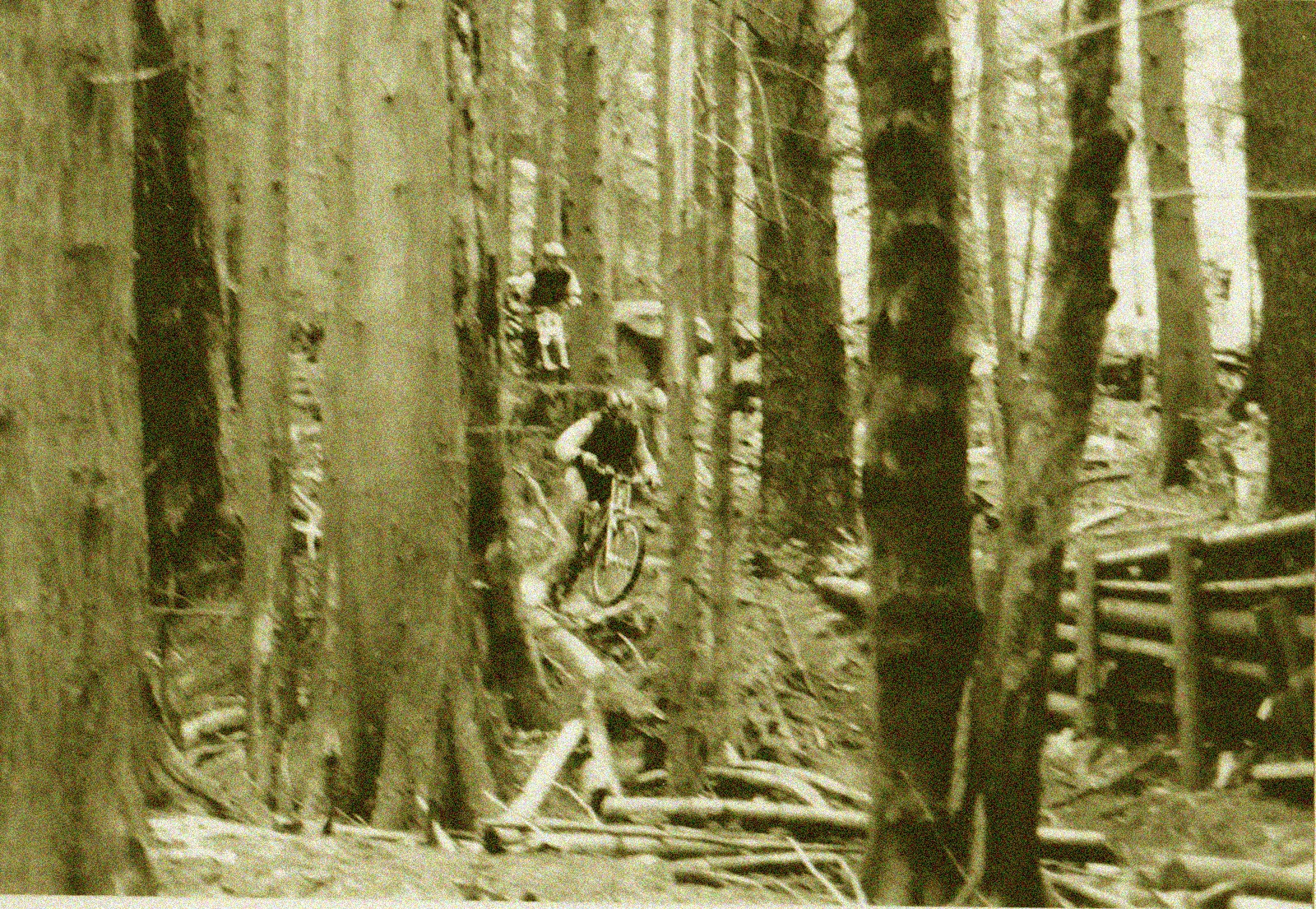 Then as the 90s dawned two particular figures rolled onto the Shore. With contrasting outlooks both of these pioneers added the last vital ingredients to the heady cocktail. Dan Cowan and Wade Simmons arrived on the scene at almost the same time but from very different backgrounds and with widely different visions. Dan Cowan was a local boy who became instantly hooked on the thrills of the forest. Once he learnt of the secret trails he became committed to finding and mastering them. Dan had a gift for muscling and finessing his way through terrain like no one else. He also had bravado in spadefuls, hence why Digger proclaimed upon first meeting him, “you’re dangerous” and the name stuck. He also had a fierce work ethic which he applied to building his own lines.

He began where The Big I finished off and started trying to continue the line further down over burly rock faces. However, it was when he incorporated an obstacle into the trail that things changed gears.

Previously, fallen logs had been incorporated in so much as riders would ride over them using either their chain ring to climb over (these ‘humper logs’ became the inspiration for bash guards) or perhaps small cedar ramps allowed riders to pass over them. However no one, until Dangerous Dan arrived, had thought to ride along the logs.
“Back then it was a novelty. You could say to your friends, ‘we rode the log ride today’ and they would know exactly what you meant and where it was because it was the only one. Nowadays they are everywhere.” Dan says proudly.

It was the start of the elevated phase and the builders were about to get really high.

Part III next weeks an evolution of trails and riders.
Click here if you missed part L.

I have the strava record for hiking up GMG with a bike. That's what happens when you're exploring and refuse to turn around. At some point I realized it was safer climbing than trying to ride down. That is what you call a "Point of no return". Towards the top the snow hid the trail. First visit to the shore.

awesome bit of history.. thanks for that