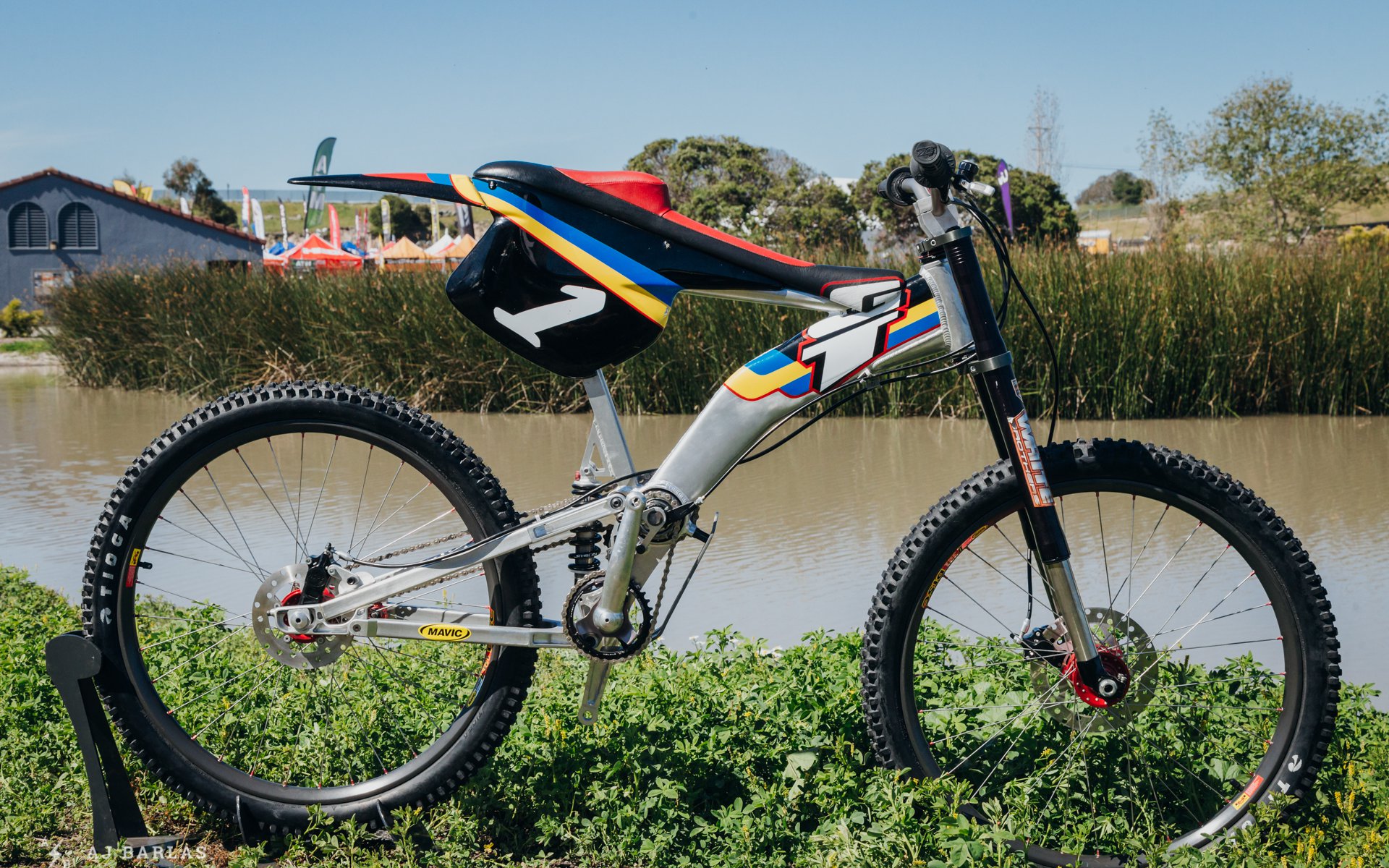 Ahead of its time

GT first tackled a gearbox concept bike, one that emulated the aesthetics of motorbikes, back in 1996. It was eight years before the Honda RN01 saw the light of day, consequently setting many downhill rider's hearts on fire. At Sea Otter this year, GT was showing off company history and there wasn’t a single new model to see. Instead, there were a number of milestones in the brand’s history on display. From the STS to the first iDrive and this concept bike, it was a walk down memory lane for long-time mountain bikers and a history lesson for younger riders.

Downhill has long had a fascination with dirt bikes. Maybe it's the little kid in many of us wishing we had a motor as we spun wheels in the dirt? Whatever it is, GT was on the same page. At the time when GT was exploring the development of the concept bike, the brand was working with legendary MX racer, Jeremy McGrath, on a signature series of BMX bikes. There were also relationships between GT, McGrath and Hot Wheels at the time, and those influences culminated in this bike. 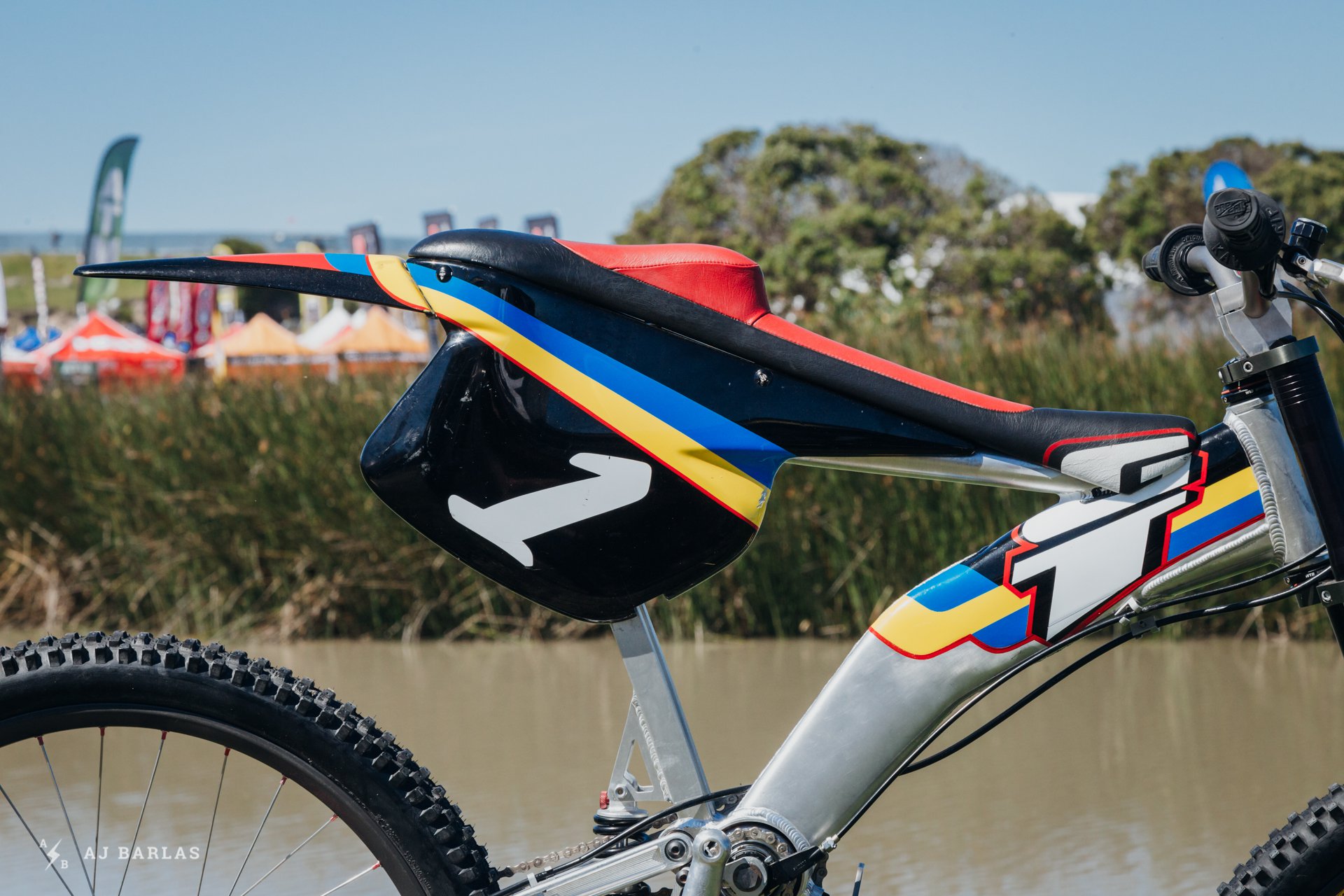 The motorcross influence is pretty clear.

The concept bike was designed as a single trade-show piece to display at Interbike in ’96 and despite that goal, it’s still rolling today. It’s no longer rideable, with the years taking their toll but it remains a conversation starter. Despite the moto styling still being very apparent, the fender and number plate that helped carry over the influence are no longer. Still fitted are a twist grip shifter, an inverted White Brothers fork with six inches of travel, the obvious draw of the moto-style seat and of course, the gearbox.

Aside from the moto-influence, the exploration of internal drivetrains was key in the development of the bike. GT was working on ways to benefit suspension design by combating the negative influences that more traditional systems face due to chain tension – a desire that is clear in the history of the brand’s bikes. To pull it off back in ’96, GT employed a 7-speed Shimano Nexus rear hub, machining the shell to remove the flanges which were unnecessary for this application. 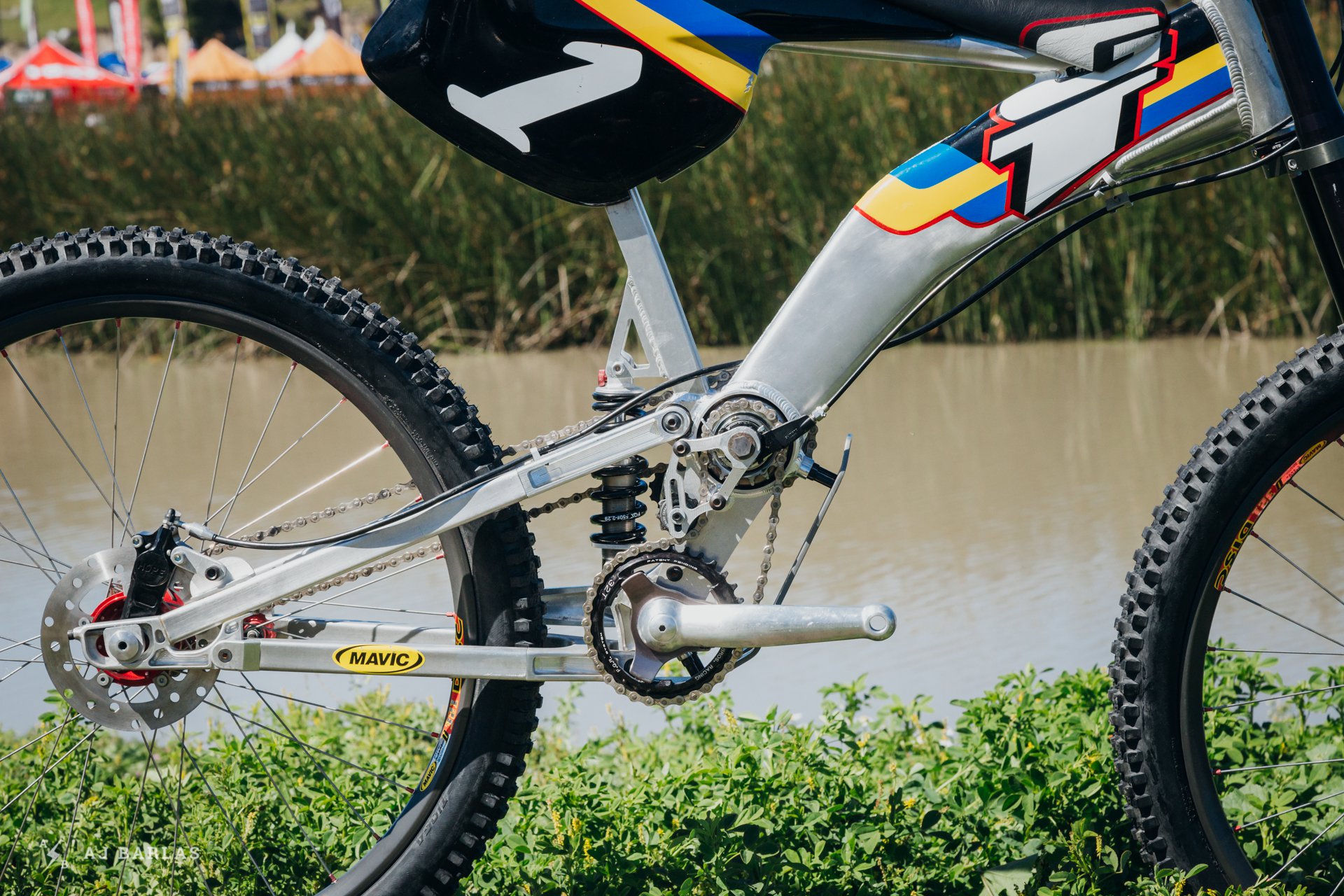 The heart of GT's Concept Bike 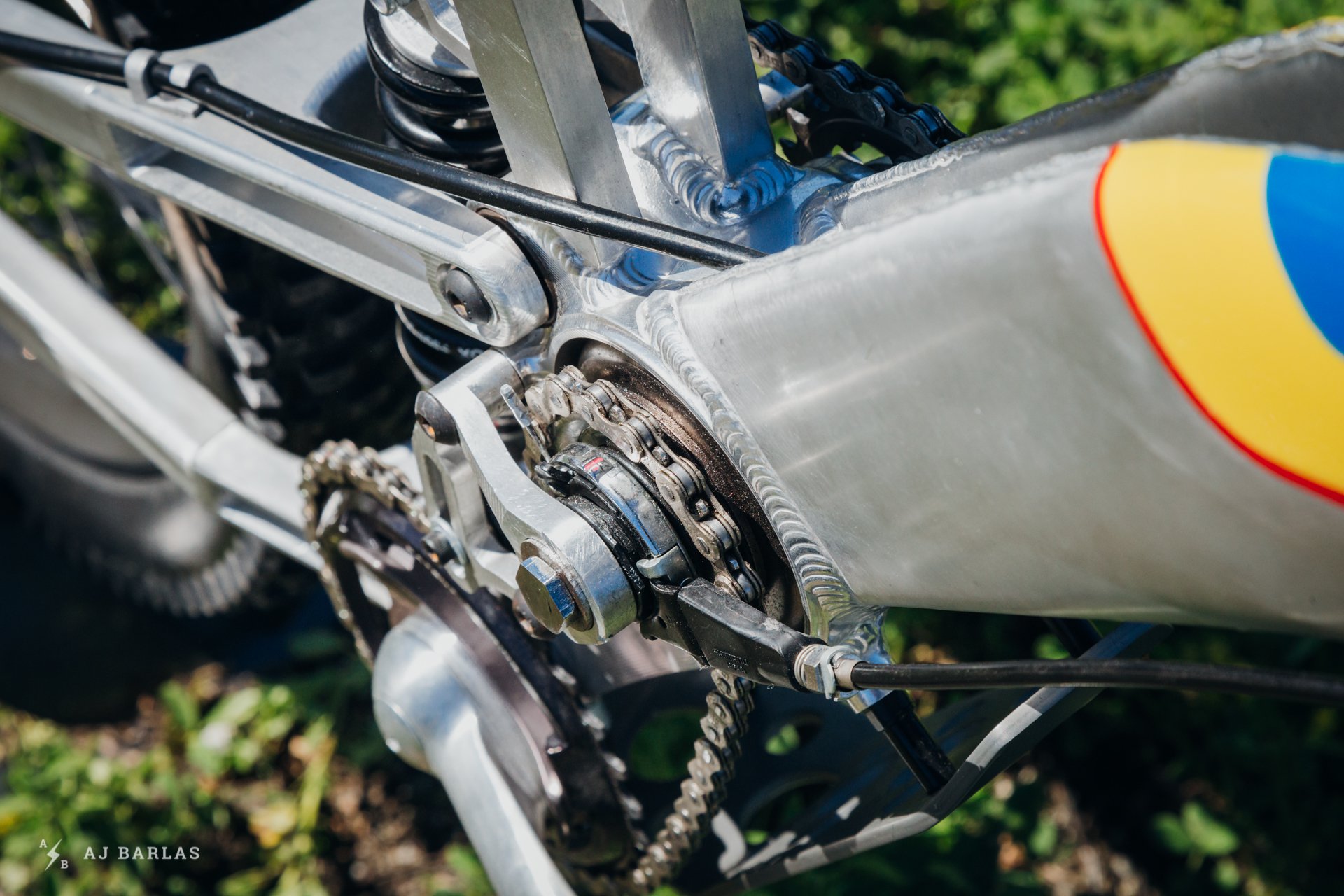 The Shimano Nexus hub that transferred power from the rider to the rear wheel. It had seven gears and was machined in-house to work with the design. 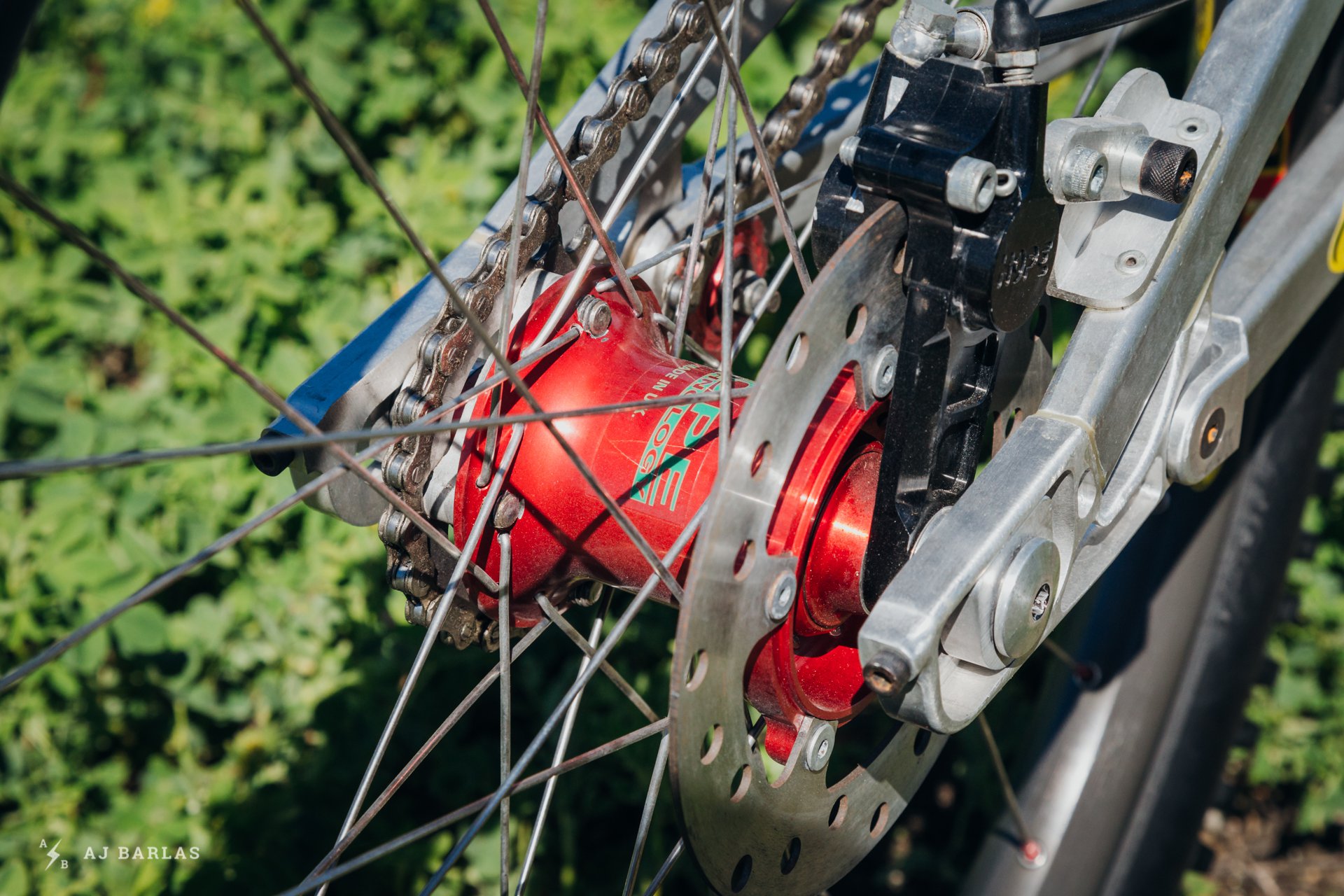 GT worked with Hope to build custom hubs to work with the unique bike.

The chainring is on the right where it’s normally found but it drives the axle of the centrally mounted Nexus hub, which acts as a driveshaft. A cog on the opposite (left) side of the Nexus hub directs power to the rear wheel. As a result, the rear brake had to be mounted to the right side of the bike and became another ode to the dirt bike. Interestingly, the Honda RN01 was driven from the right side, the same as most bikes. 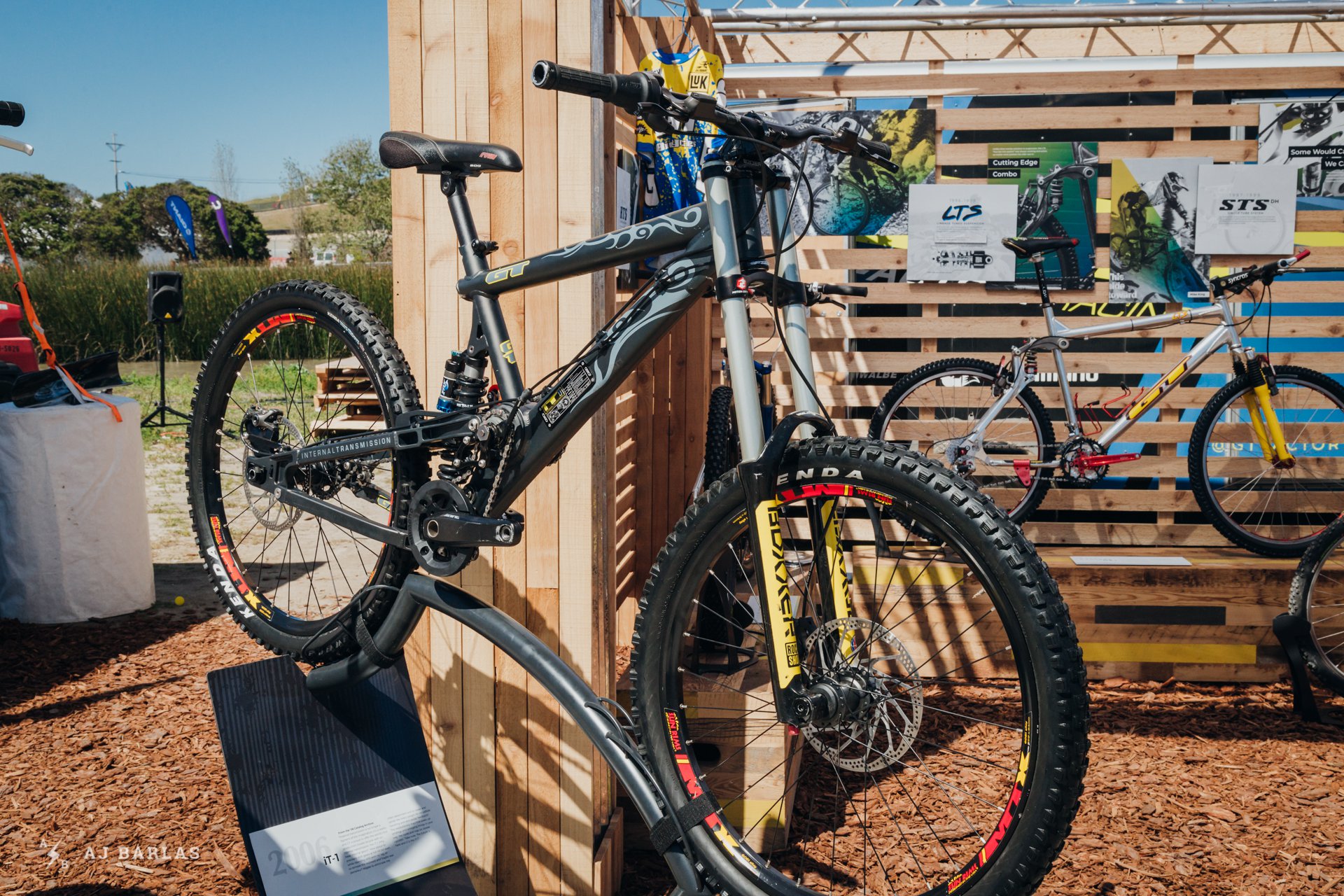 GT's IT1 didn't hit until 2006 – 10 years later – but drew an uncanny resemblance to the original show piece.

While not originally intended, this early concept bike is an obvious influence for what became GT’s IT1 gearbox DH bike 10 years later. The IT1 was in production from 2006–2010 and functionally was a very similar bike. It utilized the internal 7-speed Nexus hub, however GT was able to convince Shimano to machine hubs specifically for the application within the bike. The teams worked together with drawings generated by the engineers at GT. The output from the drivetrain was also on the left side of the bike and the rear brake was housed on the right. However, the production of the IT1 resulted in a regular seat design and the split downtube was replaced with regular tubing. 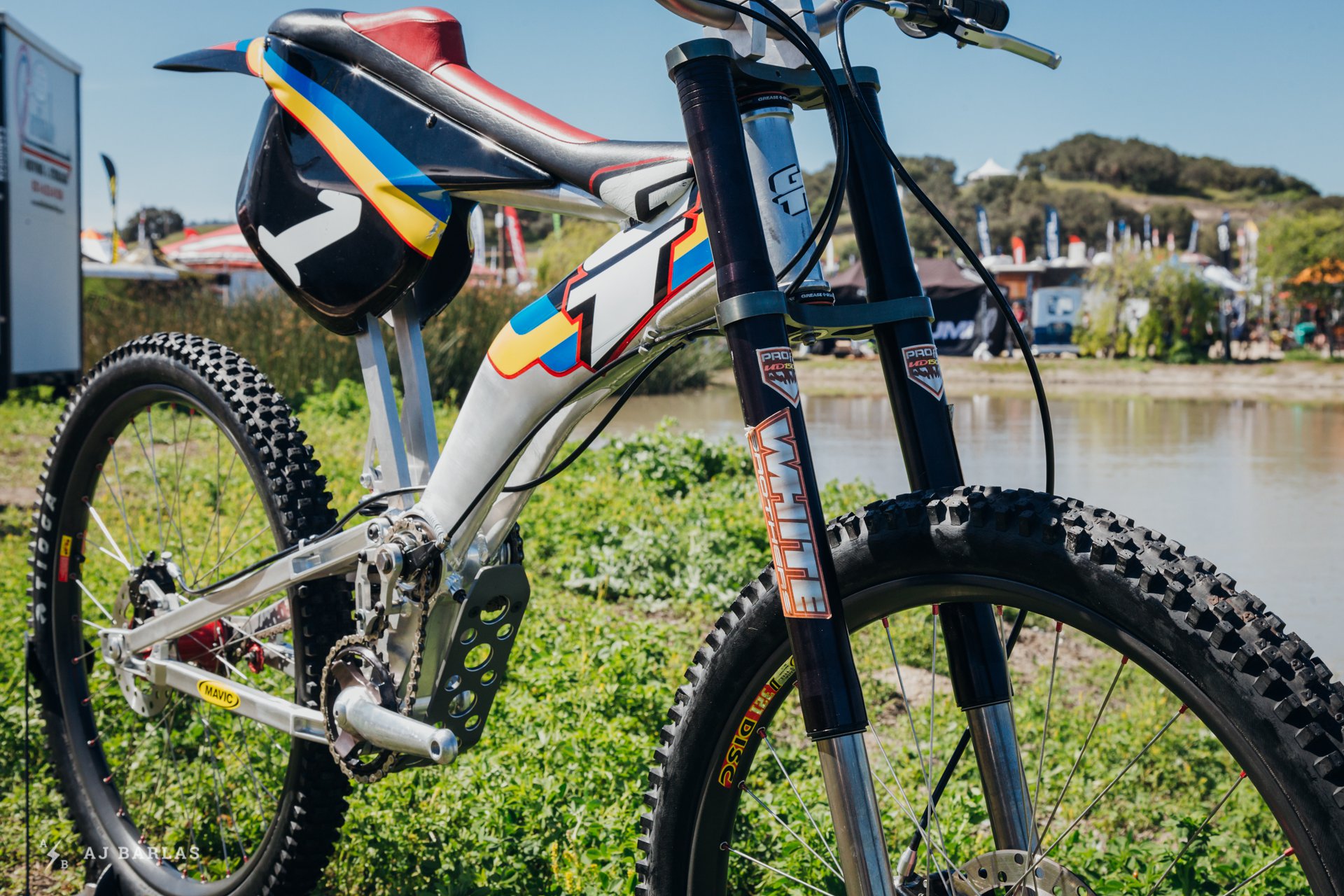 An inverted White Brothers fork with 6-inches of travel for that moto-look. 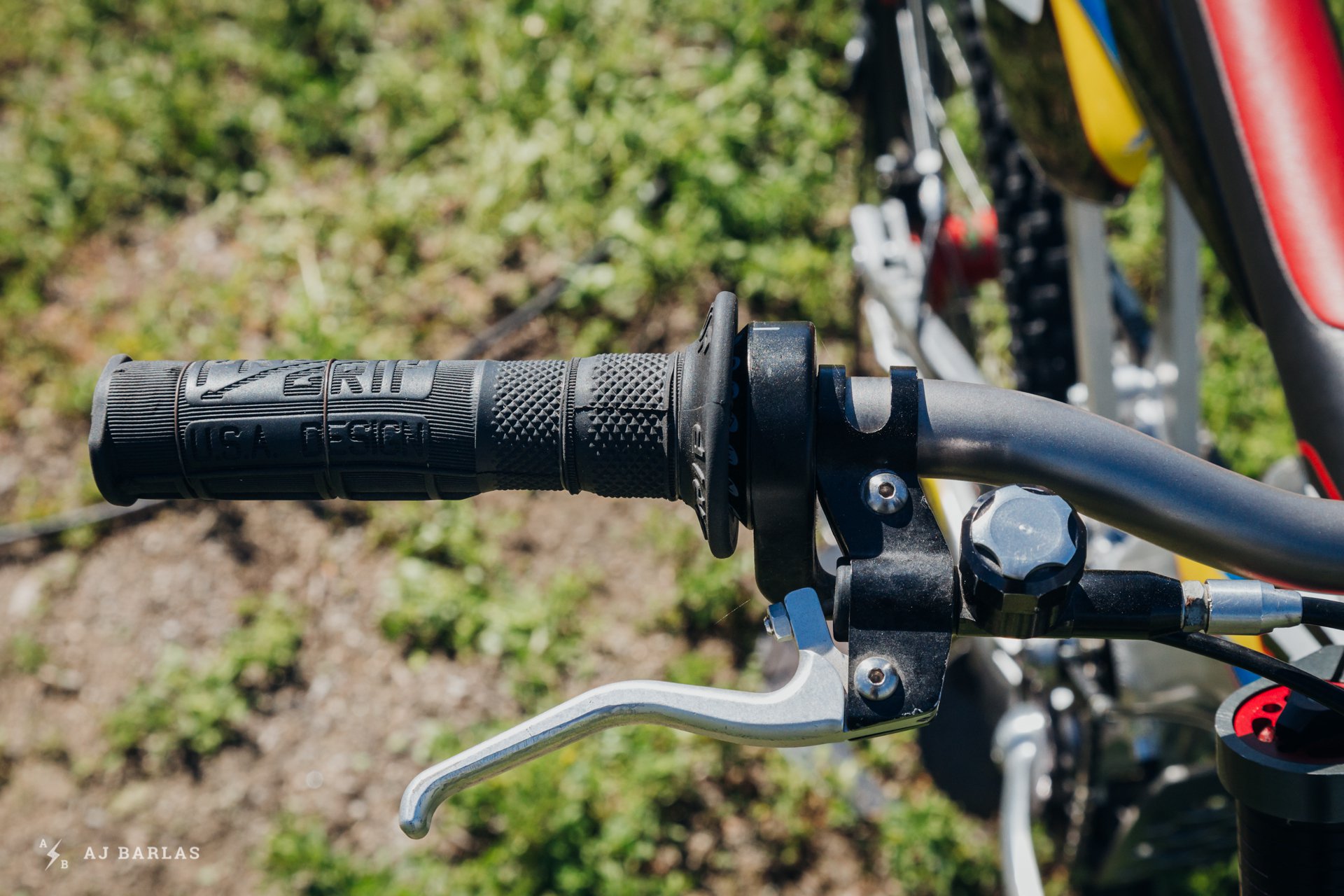 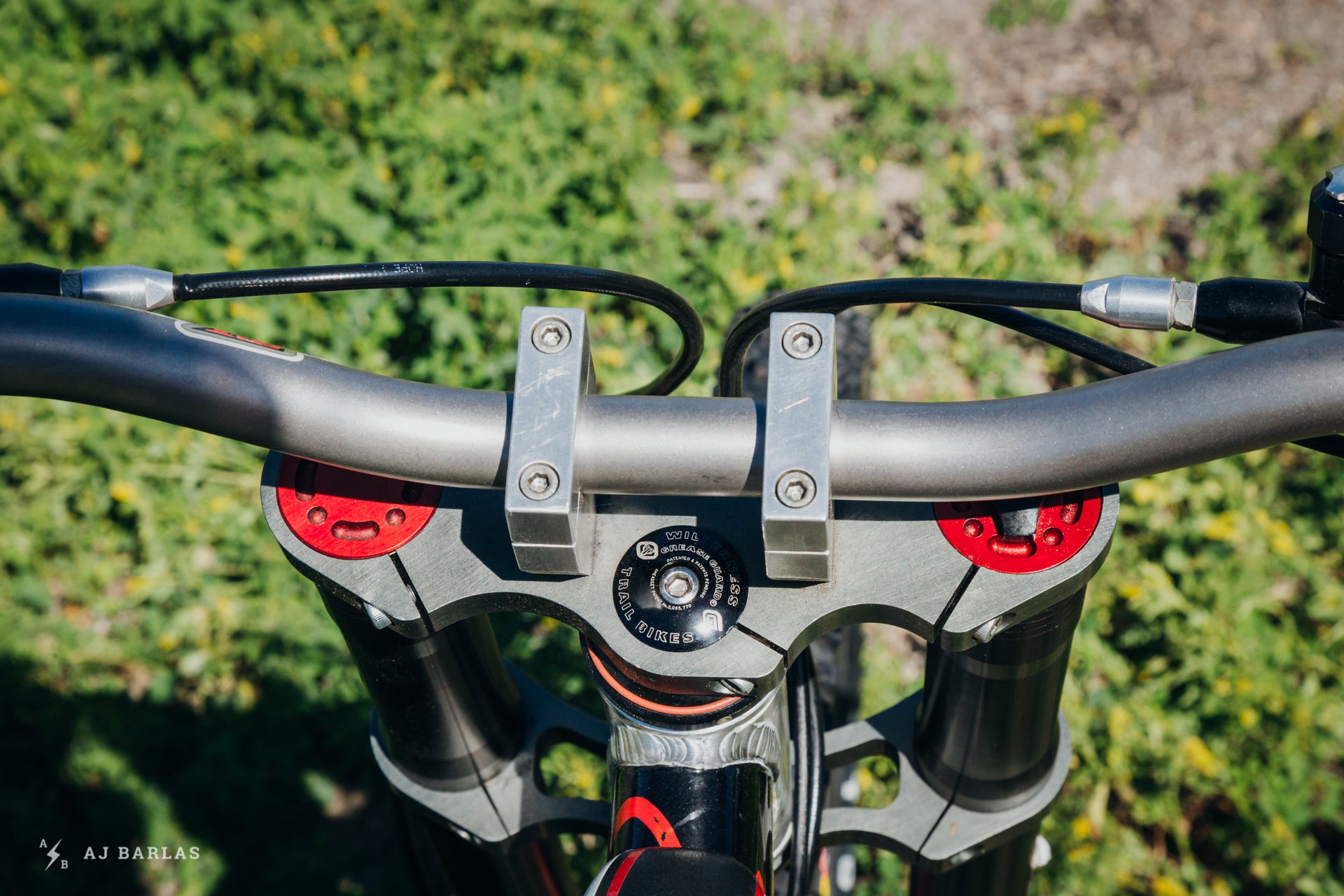 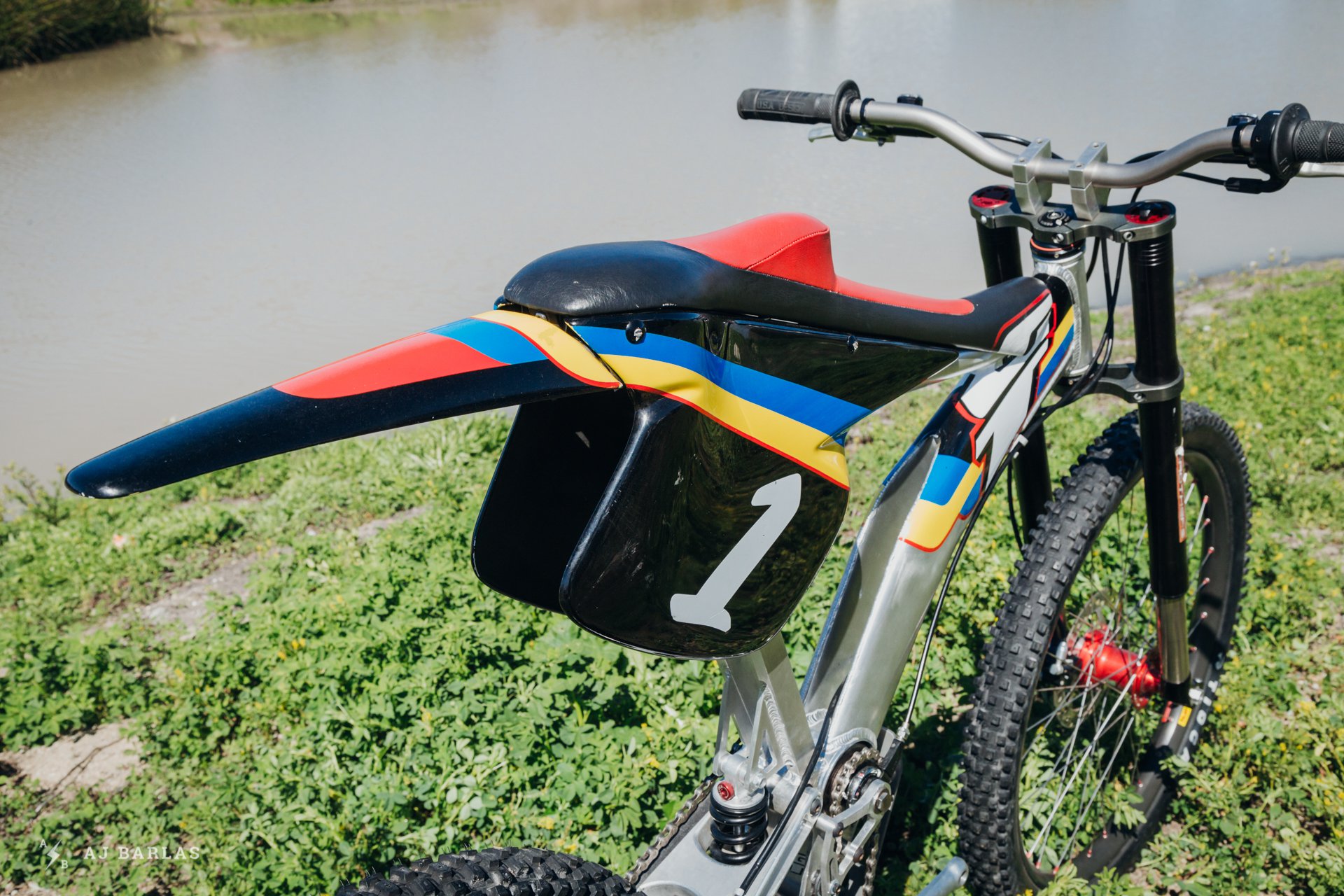 One more look at that wild moto-style seat. 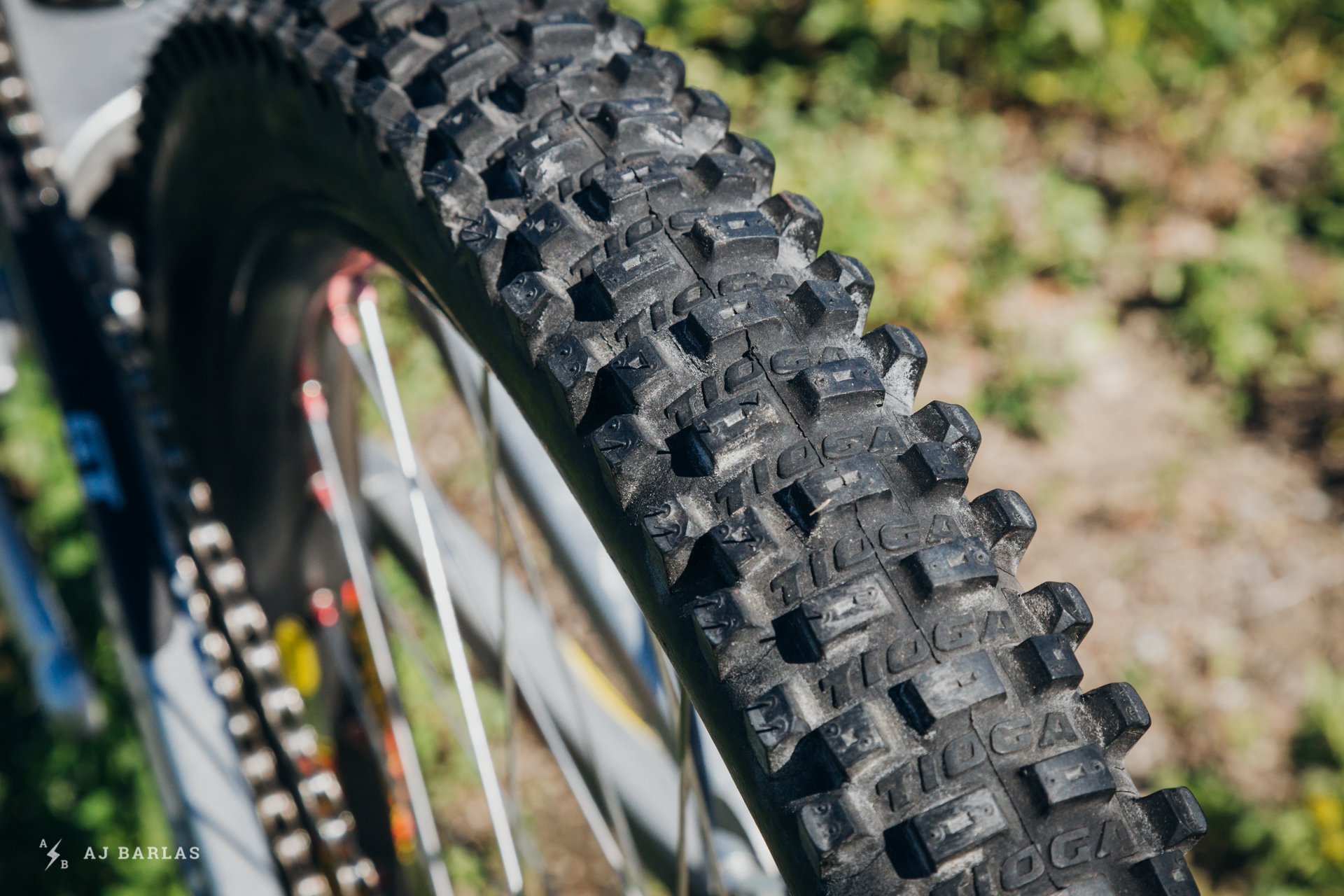 The Tioga Factory DH was the most moto-style tire of the time. It shouldn't be a surprise that it's what the bike was fitted with.

Whatever you think about the concept bike’s appearance with its MX style seat, this and the IT1 that followed were ahead of their time and possible influencers to current gearbox bike designers. Will we see another gearbox bike from GT in the future?

holy otb, that 96 model would ride like a catapult on wheels!

Things were pretty different back then, hey!? Haha.

It would interesting to remove all damping and have some of the WC riders race a bike like this for bragging rights... or whiskey... or whatever gets them motivated.

Those Mavic 321 rims I ran for many years.  521 Ceramic when I was using XTR V brakes.  In speaking of the Honda, I wonder why they made it and then POOF.  Nothing.  Seems like a waste of R+D dollars to do something so good then not produce a product.  Patent violation perhaps?

That's a question that the answer remains a mystery. Yes, those old 321 rims were great!

Back when GT was a pack leader.