I’d previously had a chance to ride a 2014 Sensor (Carbon Expert) and was pleasantly surprised at how much I liked it. I liked it even with the wimpy brakes, noodly fork, greasy tires, a long stem and narrow bar that last year’s bike came spec’ed with. Actually, scrap the last two, I could deal with the other stuff but not those. Anyway, the bike was pretty damn good; It was playful and it begged to be ridden harder than I’d expected when I first set eyes on it (because of the aforementioned brakes, tires and fork). I had a big soft spot for the Sensor after that but felt it could be so much more if only it was dressed a little differently. 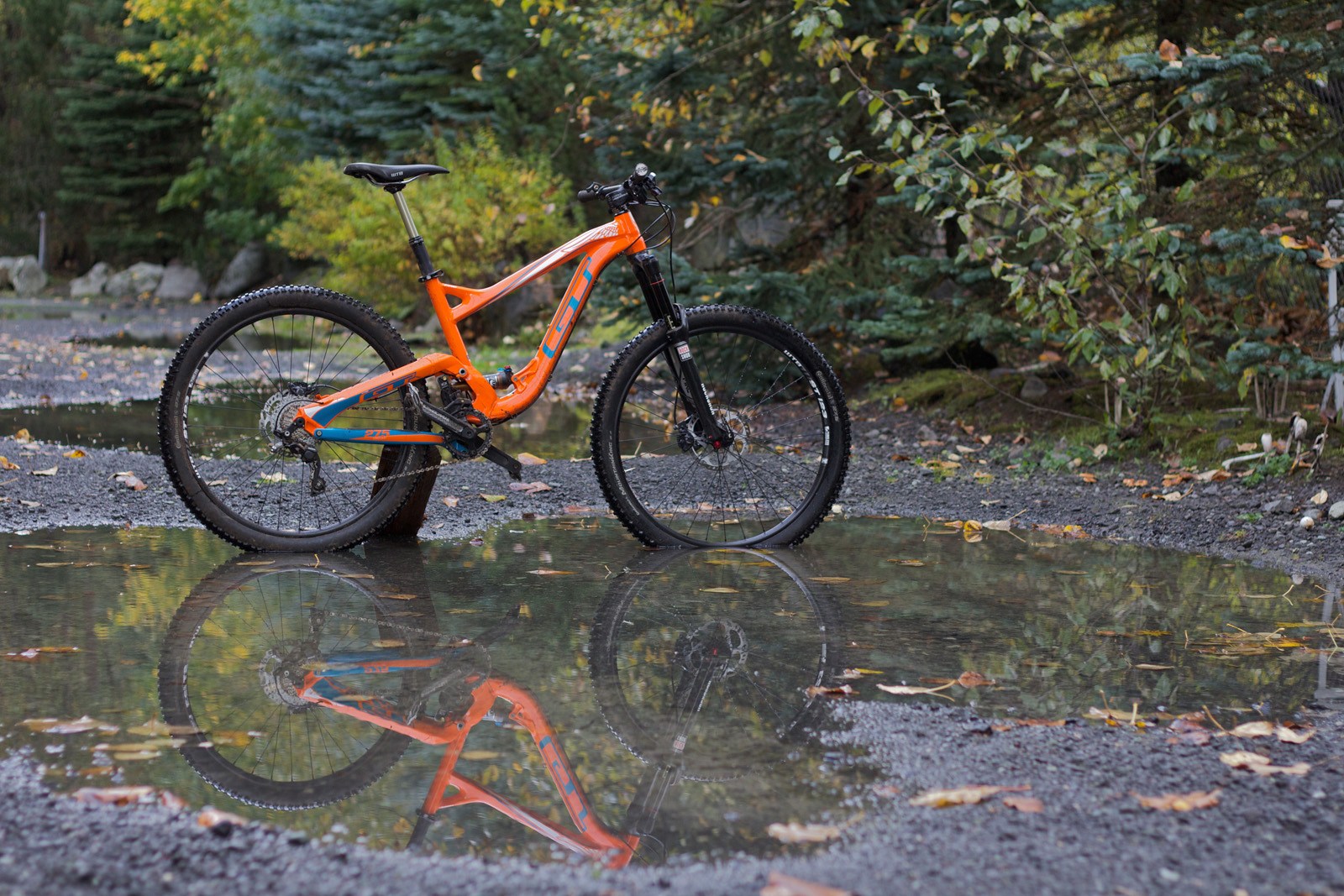 The colour is great for this time of year. Match it with a vest of the same colour and you’ll be pretty safe even when you go galloping and prancing down the trails with Elmer J. Fudd lurking in the bushes. Two major things to note: firstly, this bike has a pretty low top tube for a GT, and that’s a very good thing. Secondly, it still has room for a bottle cage. Win-win.

Well, it’s as if someone could hear my grumbles because this year. GT not only revised the parts spec of the Sensor range, they released a souped-up version of the Sensor (the Sensor X Pro) that comes laden with parts that not only keep up with the bike’s abilities but allow the Sensor to really excel. 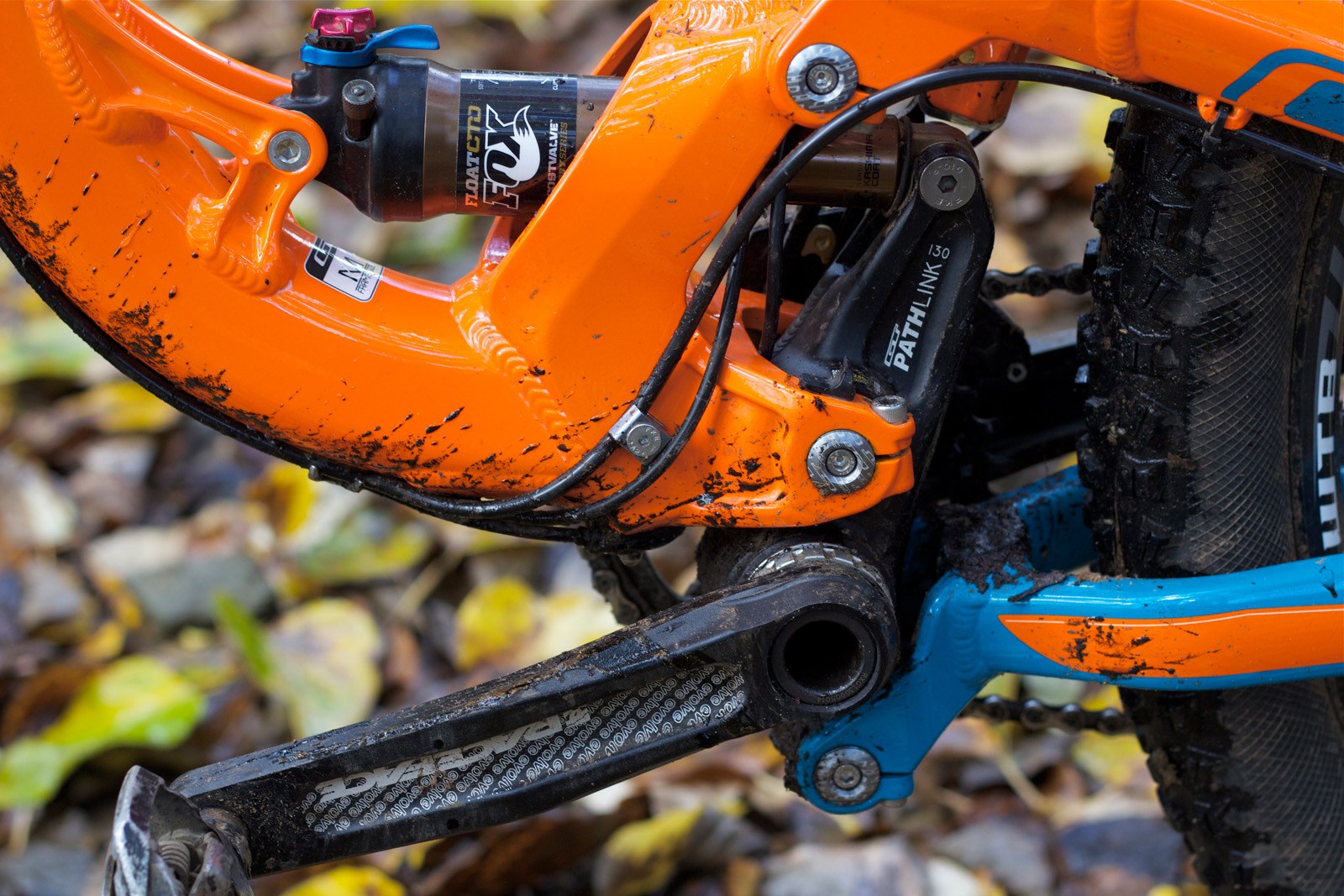 The A.O.S suspension system uses a relatively high pivot point which allows the rear wheel to move backwards away from impacts. The Pathlink minimizes pedal feedback by controlling the chain growth and isolates both rider input and suspension performance by moving the BB back with the swingarm.

Much like Specialized’s EVO line of bikes the Sensor X Pro is a highly tuned version of the standard model. The fork, drivetrain and even the cockpit has been upgraded in a way that will suit riders who love a little va-va-voom. The kind of rider who wants to go on an XC ride but will probably be looking to maximise the fun had on the downhill sections. Or perhaps for the rider who will have their head up looking for the places to lark about on the trail and not just have their head down pounding the cranks to the end of a segment in the most efficient –and perhaps safest–manner possible. I think there’s a third variety of rider but I promised myself I’d get through this article without saying that word… 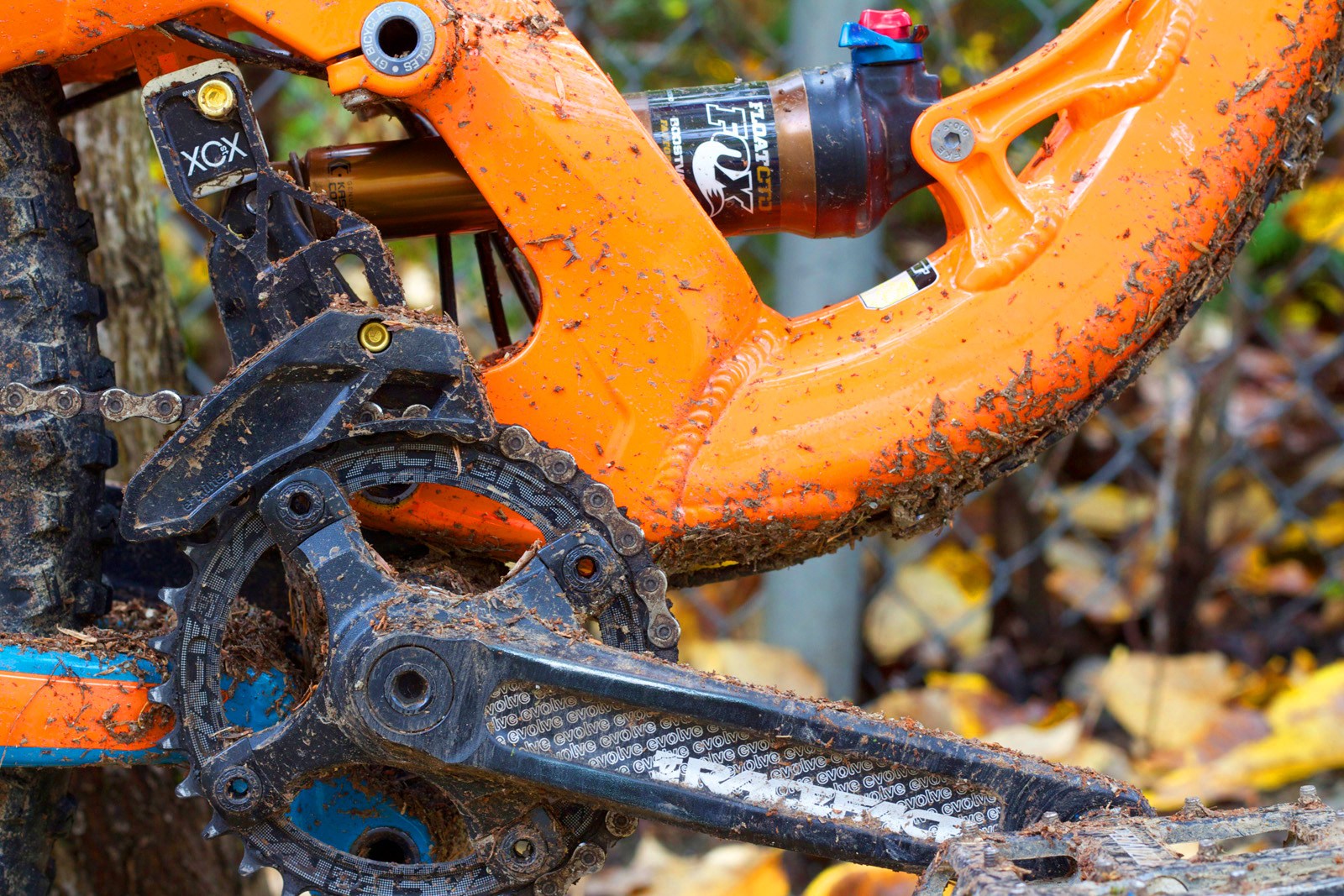 Hello Mr. One-By drivetrain, how you doing? It’s always a pleasure when you come to party. Oh, and who’s this you’ve brought with you? Ms. RaceFace Narrow Wide chainring and her minder, Mr. e.thirteen chainguide. Well, let’s get down to business. Shall we start with a shotski or just get into the “party supplies”? 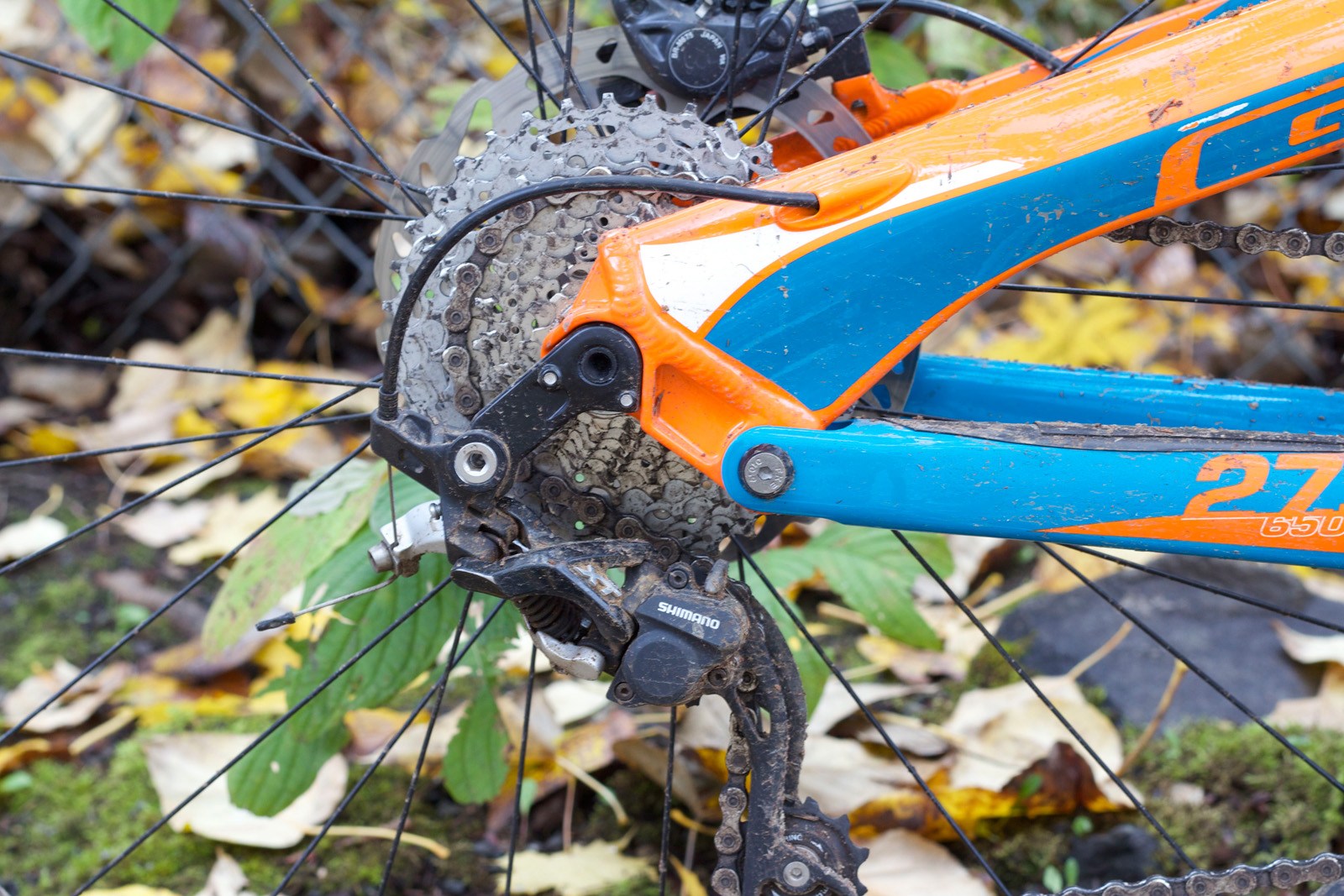 Out back there’s a XT derailleur on a Shimano 10-speed 11-36T cassette. Some riders might be looking for more or less up front or out back – a 32 tooth chainring might have people reeling, but this bike isn’t made for complainers. The kind of rider who’ll enjoy this bike is probably very used to such a setup and like to party. 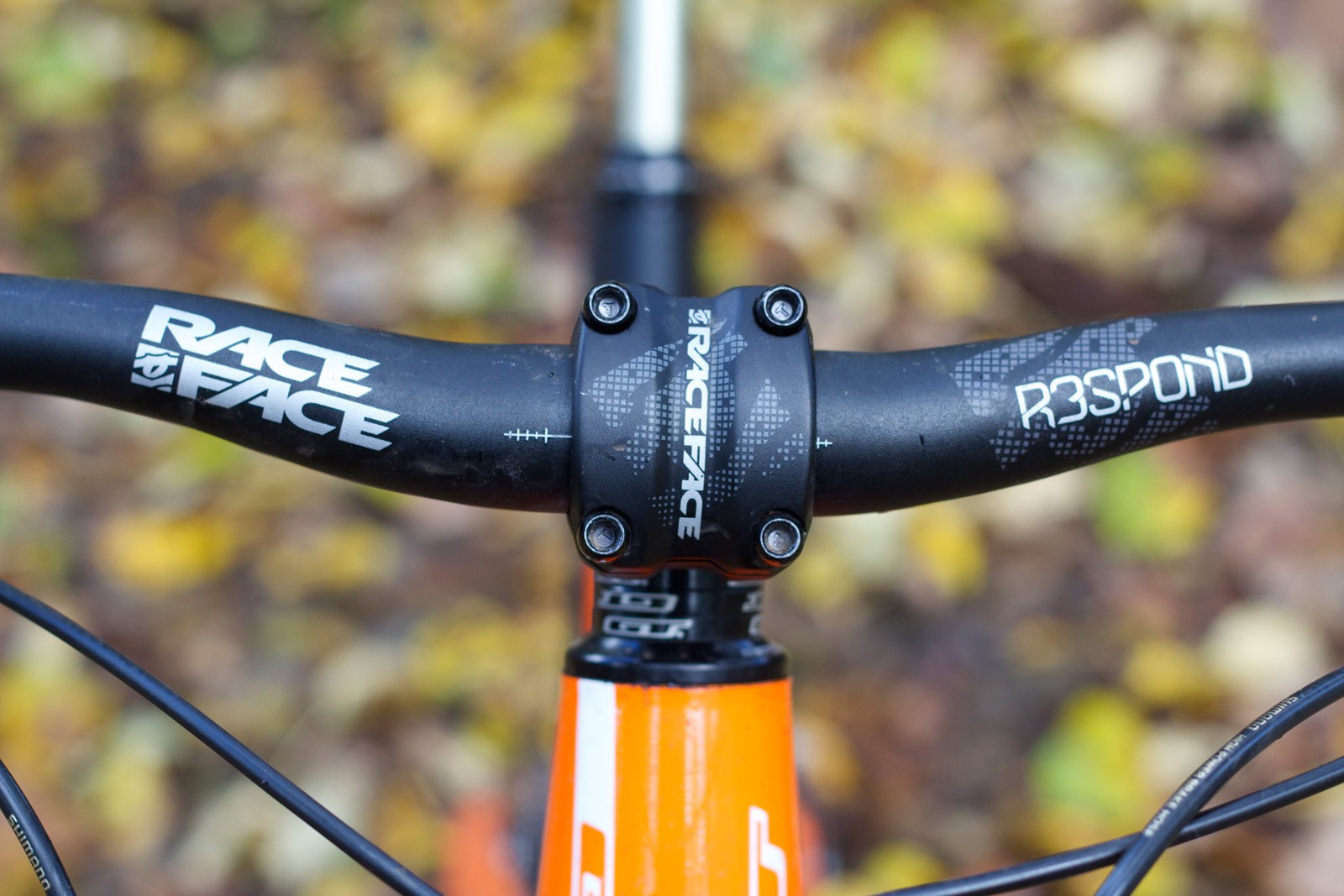 Yes! A proper width bar and period-correct stem. Anyone that wants a narrower bar and longer stem should perhaps look at another bike.

I’ve only managed a quick few rides on the Little Redhead, still barely time to get everything setup ‘correctly’ and blow off the cobwebs after not riding so much this summer – which means reminding myself of the difference between what the bike is doing right and what I’m doing wrong. 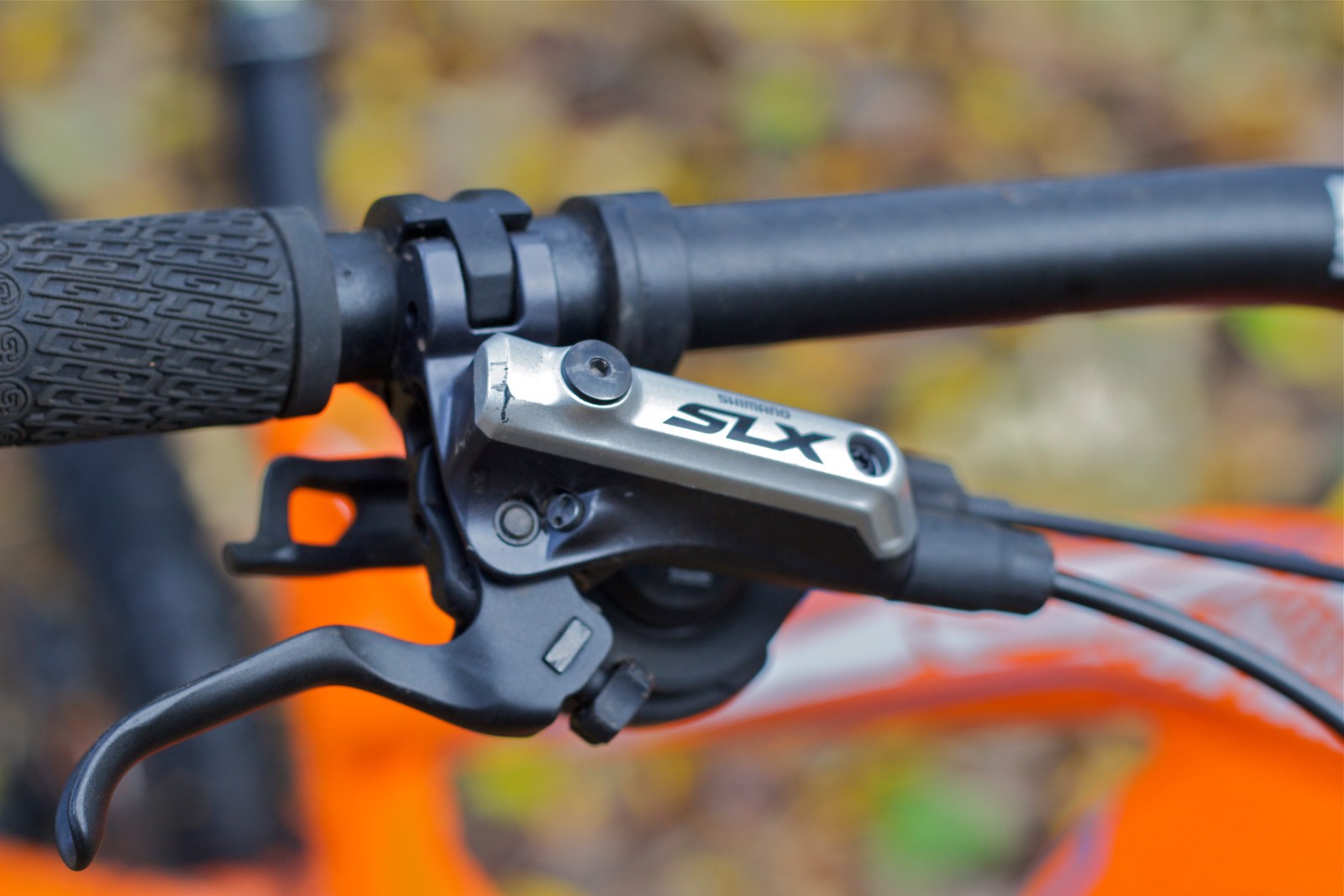 Shimano SLX brakes are a good choice. Last year the Sensor came with some woefully underpowered Formula calipers. Now this bike can be really rallied without fear of flying…off the trail.

(Potential) Negatives: I’m unsure of the Mountain King for a front tire. There is traction but the rounded profile, widely spaced knobs and shape of corner knobs give them a very linear drifting; that is, once you start to drift you feel that they will predictably keep drifting at the same rate forever, unlike, say, Maxxis Minion DHF tires which have a predictable drift which is followed up by a predictable catch point. Also, maybe I’ve been spoiled by the mighty Schwalbe Magic Mary, a tire so outstanding when in the hand of ham-fisted, overly aggressive, foolish riders that it’s almost cheating. The Mountain King as front tire, on the other hand, requires a delicate hand, more careful line choice and less forceful pressure control. 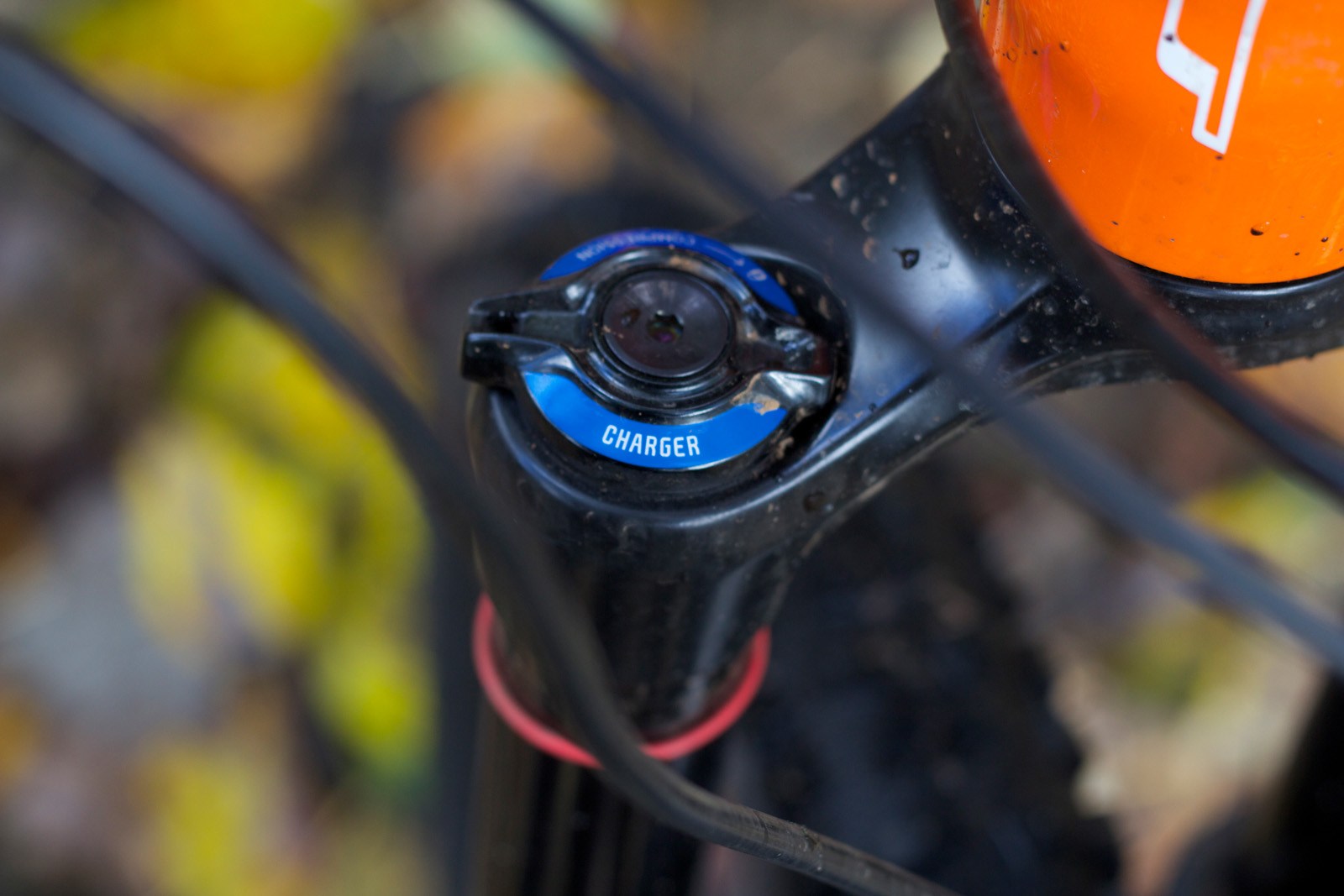 Lo and behold, a Charger damper! GT went with a 150mm fork to ‘match’ the rear suspension’s 130mm travel. Some might call this an unbalanced setup but it could be a stroke of genius. Only time on the bike will tell. Either way, with the Pike up front it gives this bike some poise and brawn.

Also, the cable routing is awful. Not bad, but shockingly terrible. Right out of the box the outer cable for the rear derailleur rubbed on the shaft of the rear shock, causing some of the precious Kashima coating to rub off. It’s like someone forgot to tell the bike assemblers how best to do it and someone in the factory just figured this way was the funniest, weirdest way they could do it. 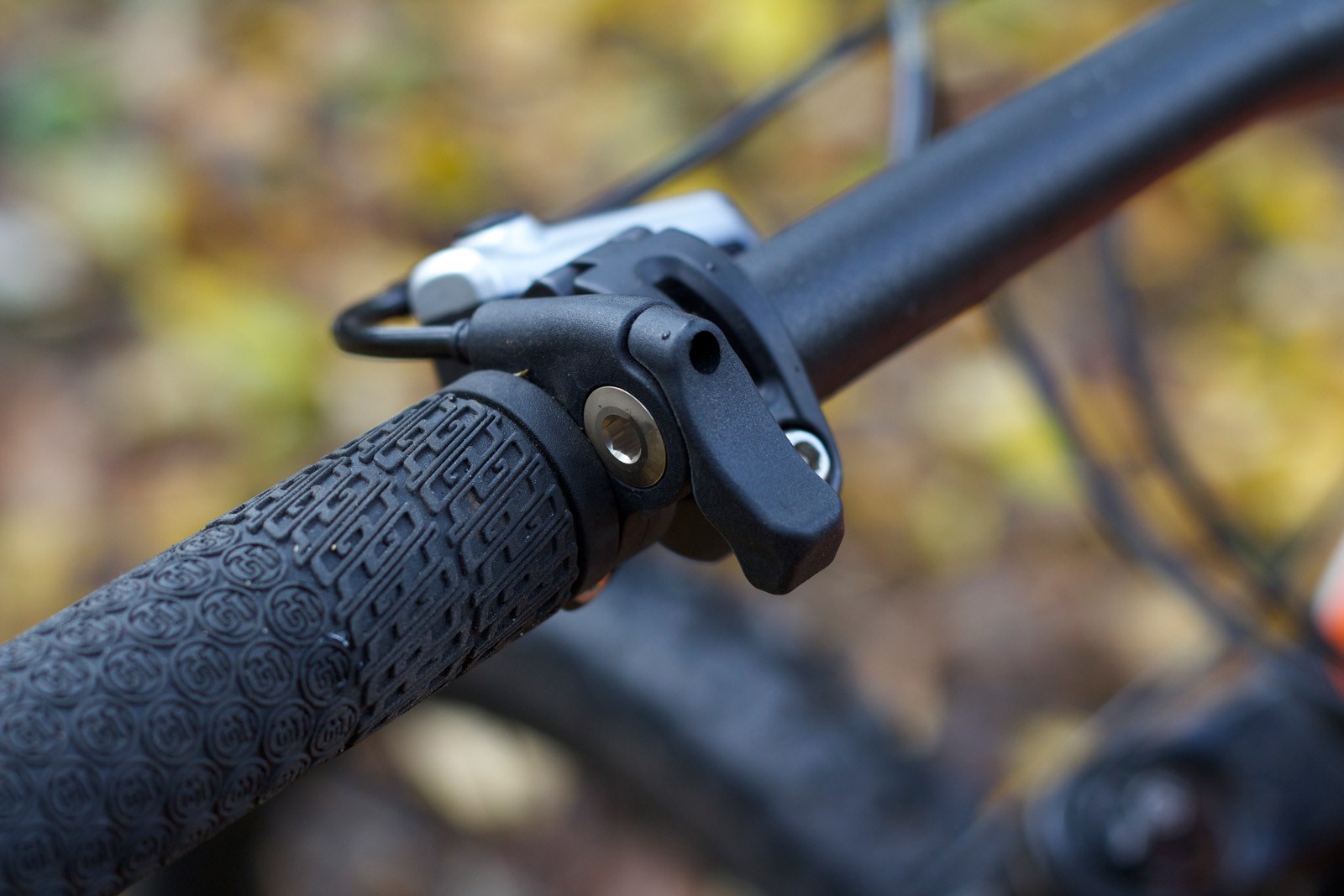 Taking care of uppy-downy seat duties is the brilliantly reliable, simple and well mannered KS LEV Integra. I’ve had a non-internal version of this seatpost on my personal ride for over a year and haven’t even had to adjust the cable. Oh, and this lever – smooth, right where it should be and won’t stab you or break off in a case. Great touch, GT.

First impressionz though: this bike is fun. It’s not to say that in the right hands the Sensor X might not be a super-serious, race-ready, time-seeking machine but it’s got a lovely lively character that so far has coaxed me to add a couple little pedal strokes and pull-up harder out of turns. I’ve even fitted flat pedals on it just to have even more reason to prat about. After a few months of riding I probably won’t judge this bike on how fast or how many gold stars it can score, but rather how many rides I come home from with a shit-eating grin on my face. Bring on the faeces.

Seb’s got his party on and the Sensor X Pro looks like a good value bundle. Have you seen Elmer Fudd on your travels lately?

Absolutely. I don't know how GT as a company can confidently sell that linkage mess.. Right in the path of a tremendous amount of mud and every thing else the rear tire will throw at it.

Is it just me, or does the marking on the bar in the bar/stem photo make it look like the bar is way off to the rider's right?

Life's too short to ride crappy tires. Slap something with a proper side knob on the front. Rode some round profile tires on a "once a year" trail and regret not being able to confidently let-r-rip.

Seb Kemp is probably the best bike reviewer you can find in the industry. Not only can he write reviews better than anyone, he can ride better you and will tell it the way it is. His reviews at BikeMag for the Bible of Bike Tests were spot on and he didn't pull any punches unlike the other reviewers.

Pretty much what I wanted to say as well… and a sense of humour doesn't hurt either!

Seb - give the Mountain King some time up front. I was skeptical but now am completely sold.

I blew through three Trail Kings last season - 2 up front, one out back. Those Conti tubless casings are funky. Consider yourself warned, Seb. All of my failures occured when I was really railing on the tires and it happened to several other riders I know. Lame. Never again.

I agree with Josh. Mountain Kings work well (assuming they are the Black Chilli Protection versions) but are quite pressure sensitive. I had the same problem on Howler the other day but then realised I had forgtten to burp the tyres inflating them to seat them during a tyre change.