After two and a half years of use as my primary pedals across countless bikes and more than a handful of cleat replacements, my Deore-level Shimano M530s have just plain worn out. The bearings are still good, the spindles are straight – but I’ve actually managed to wear out the SPD engagement mechanism. 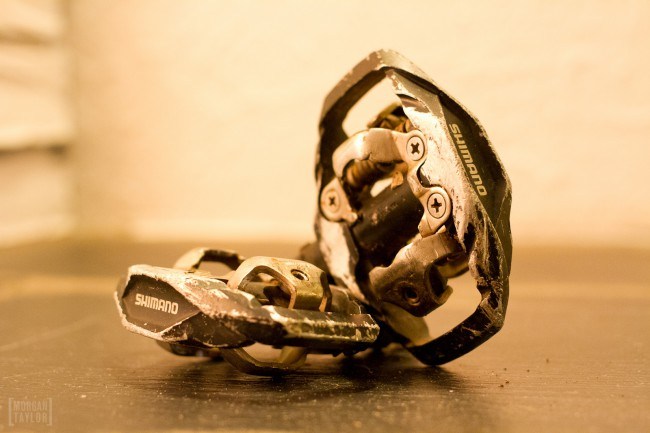 I don’t think there could be a better way to have to retire a piece of gear than to say that it worked flawlessly through more than its expected lifetime, and actually does still work if you’re not picky. Over two years out of a set of $65 pedals is a good deal in my books.

It was in swapping these pedals from one bike to another a couple months ago when I realized the clicking I was feeling through the pedals on each rotation was coming from the pedals – specifically the pedal-cleat interface – even with a relatively fresh pair of cleats. 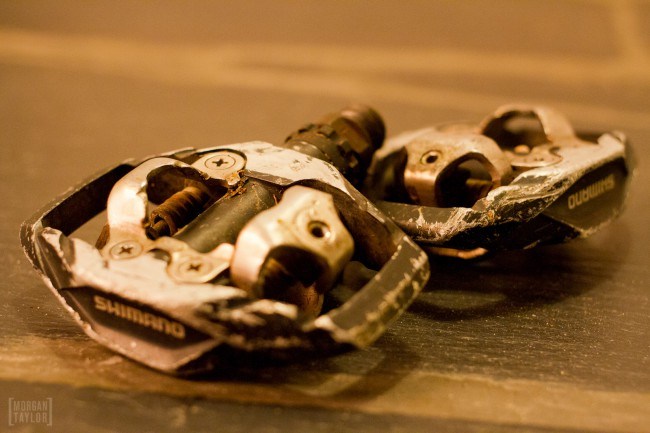 These pedals have been on a lot of bikes. On the plus side, I can always tell which pedals are mine when they’re jumbled up with a pile of other media bikes at product launches.

The M530s have actually surprised me with their long term durability. Nearly a decade ago I ran through a number of sets of the M520 that this M530 is based on, with either a spindle bending or a pedal developing a bearing click within a few months of use. Those were $45 pedals and I was almost treating them as a disposable item at the time. 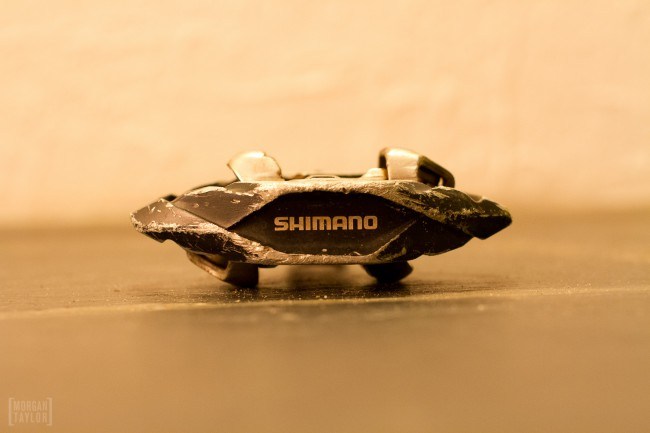 Shimano is the most trusted name in clipless pedals, and for good reason. Their cleat to pedal interface is predictable, dependable, adjustable, and consistent through the price range. The Trail range of minimalist caged pedals is a great update for riders looking for a touch more support and ease of clipping in quickly.

I was lucky enough to buy a pair of lightly used but superseded M959 XTR pedals in 2009 – the first of the mud shedding SPD designs – from a racer friend, which lasted a couple years before becoming loose and just feeling tired. It was at that point that the M530s came into my life, and I never really looked back. 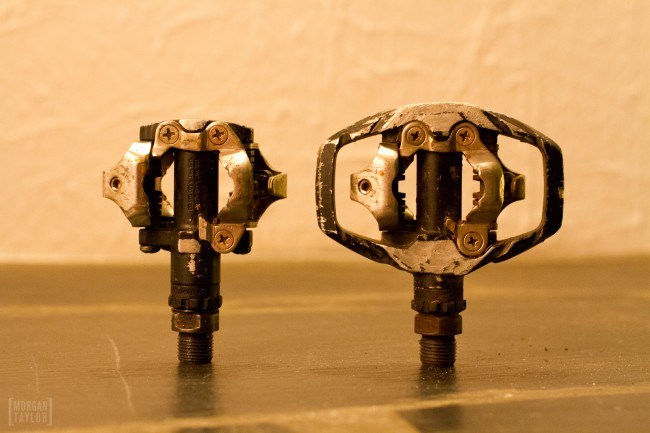 Upon discovering the irritating click was coming from my cleat, I switched over to a set of M520 cageless pedals, on which the M530 was based, and immediately found that I had taken the larger Trail platform pedal for granted. The M530s provide noticeably better lateral support, and while the cage may seem unnecessary, it makes clipping in a whole lot simpler.

While structurally the M530 shares the same spindle and engagement mechanism as the M520, the wider platform (63mm vs 50mm) and easier entry provided by the cages make the Trail platform a solid choice and worth the 75 gram penalty. For two and a half years these pedals have been trouble-free and have never seen a tool beyond a pedal wrench and the occasional 3mm allen to adjust tension. 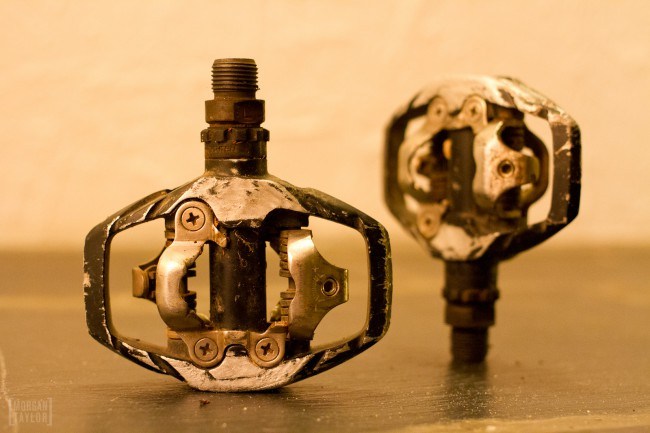 The M530 Trail pedal falls into the category of good cheap gear.

The XT and XTR Trail pedals are more shiny and about 50 grams lighter, and as a result get more attention – but at a third the price of XTR and half of XT, the M530 is a sleeper hit. There’s no doubt that my next pair of long term pedals will be SPD, and I will happily buy another pair of M530s.

These are great pedals and a crazy good deal. I actually like them better than my DX

I might go back to clips - how useful is the extra body? When do you use it exactly?

I find the extra body is most useful when trying to find the pedal to clip in, but the extra width is also appreciated almost all the time. On steep terrain or in awkward spots where getting started clipless is a bit more challenging, the M530 cage guides the cleat better. With the cageless M520, which I been using again since retiring the 530s, I find myself fumbling more to catch the cleat. The extra width of the platform (1/2″ actually) really feels more solid underfoot, which is a bigger thing for some people and especially helpful with shoes that aren't as stiff.

i like that you gave these pedals their due when they died morg. buying cheap stuff you treat as disposable that ends up being reliable and performs well is always a pleasant surprise, perhaps even better than buying and babying expensive stuff because its such an unexpected pleasure

For someone who isnt a weight weenie - are these an obvious choice over the more expensive XT & XTR versions, or are there other things to consider as well (someone mentioned durability above)?

XT is certainly good enough, and only a few grams heavier than XTR. If you're not a weight weenie and are happy with the engagement of the Deore level pedals (which is definitely good enough for my needs), the general consensus is that the M530 is a durable pedal at half the price of XT.

I have 3 pairs of these Shimano "trail" pedals.. two in XTR guise and one in XT. They are absolutely fantastic. I did however, blow up one of the XTR pedal bearings and it is currently sitting in my spare parts bin awaiting a rebuild.

XTR seems to be the only pedal in this range that was affected by durability issues. The price of being an early adopter, perhaps?

Agreed. Fantastic value in these little devils. Mine have been abused for almost a year now and they're still like new.

I've had a pair of M530s for two years too. They've moved around on a few bikes and worn out a few pairs of cleats. They've taken a ton of abuse.
They're awesome pedals.
Incredible really, for $50.

Is the platform big enough to use them without SPD shoes? I've been thinking for a while now to buy them if I can use them on my daily commute to work. Any advice would be appreciated. Thanks!

Nope, any of the trail series caged SPDs can't be used with out clipping in. If you look at the side view pic, you'll see the cleat mechanism is a lot higher than the cage, that makes them very slippery.

If you want to use them without cleats, check out the Shimano full cage style pedals. Be warned that the cheap ones won't take much abuse to the plastic cage though.

I personally feel that neither the "Trail" style pedals (M530, XT, or XTR) or the old DX pedals are really well suited to use without clipless shoes. The engagement mechanism sticks up above the cage in both cases, though the larger cage on the M647 DX and M424 is slightly better. Passable for the occasional few blocks to the corner store, but not for any real distance. Using these pedals with flat shoes puts your foot at an awkward angle, messing with knee geometry – not good. However, the cage on all of these pedals does help with the times you end up riding a section of trail unclipped with the pedal in the middle of your foot.

i just picked up a set of shimano a530's for my commuter. i've only had them for a week and haven't run them clipped in yet. i foresee a potential issue in that the cleat is actually slightly raised, so i may end up with a bit more bend in the ol' knee when clipped in unless i remember to adjust the seat post height. but it seems the only/best option for a pedal you can run both ways

I ran these all of last year. Great performing, durable pedals! All for £10 more than a set of cleats…