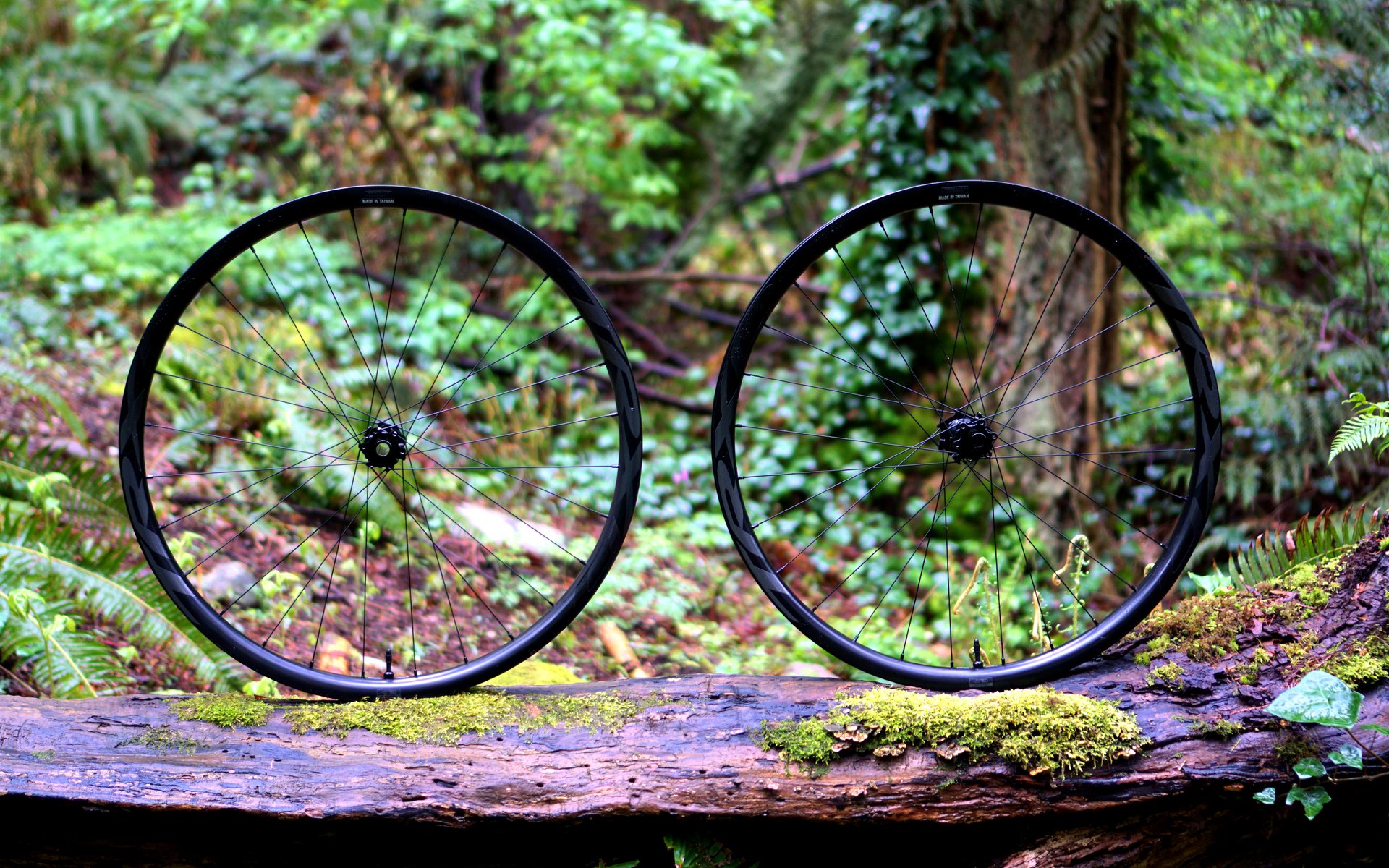 I published my first look on the Giant TRX0 wheelset here in May of this year. Since then I've been riding and racing on the TRX0 wheelset. I've done 700 hard kilometers on the wheels, enough to share fully flushed out impressions. 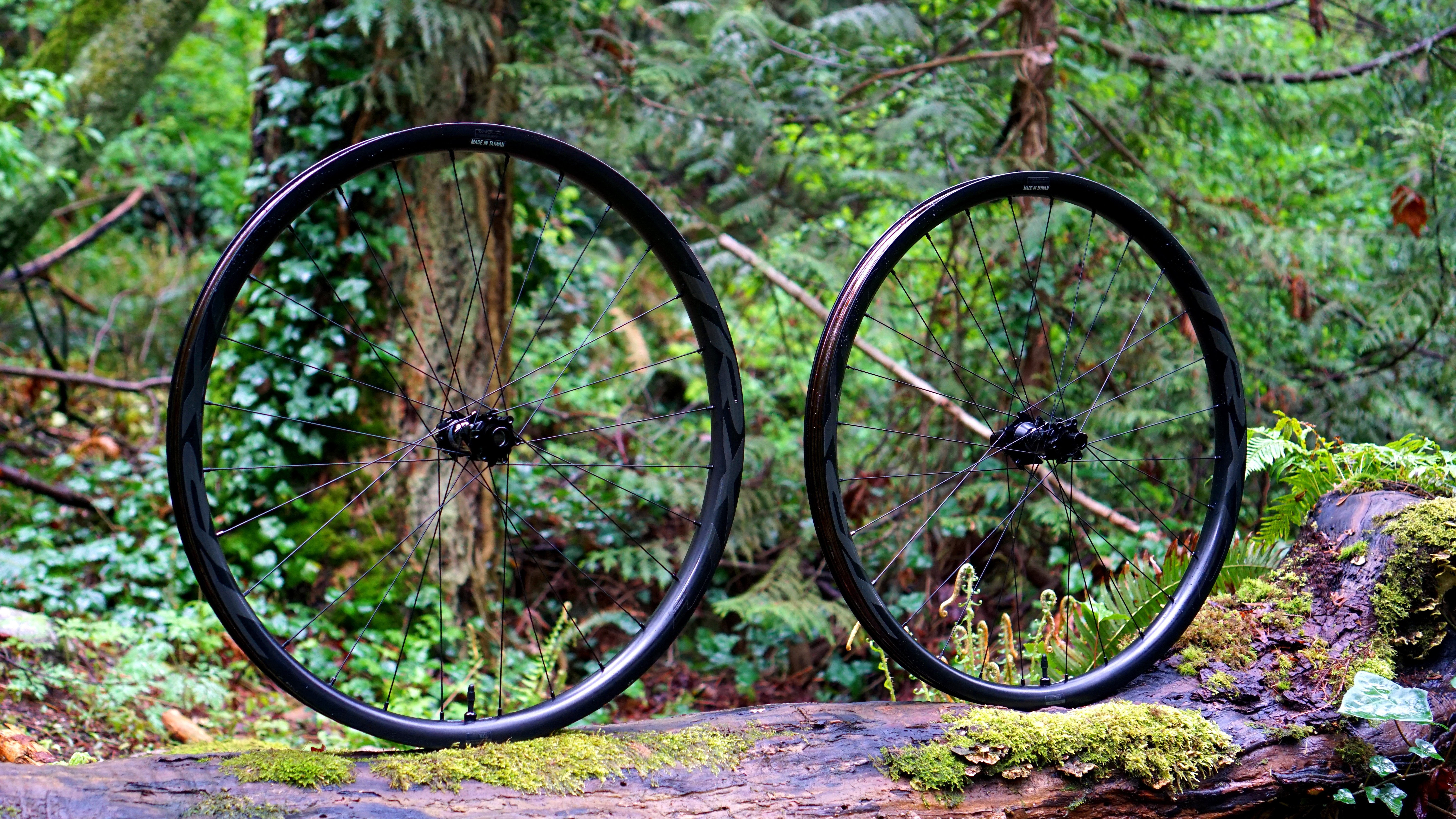 I tested the Giant TRX0 wheelset in the 27.5" variant.

Mounting up my favourite Schwalbe, Maxxis and WTB tires was fairly easy. Some tire levers were required, but I could inflate each with a simple floor pump. As far as rim protection goes, the test was conducted without tire inserts. Fit and finish of the hubs is excellent, as to be expected from DT Swiss. 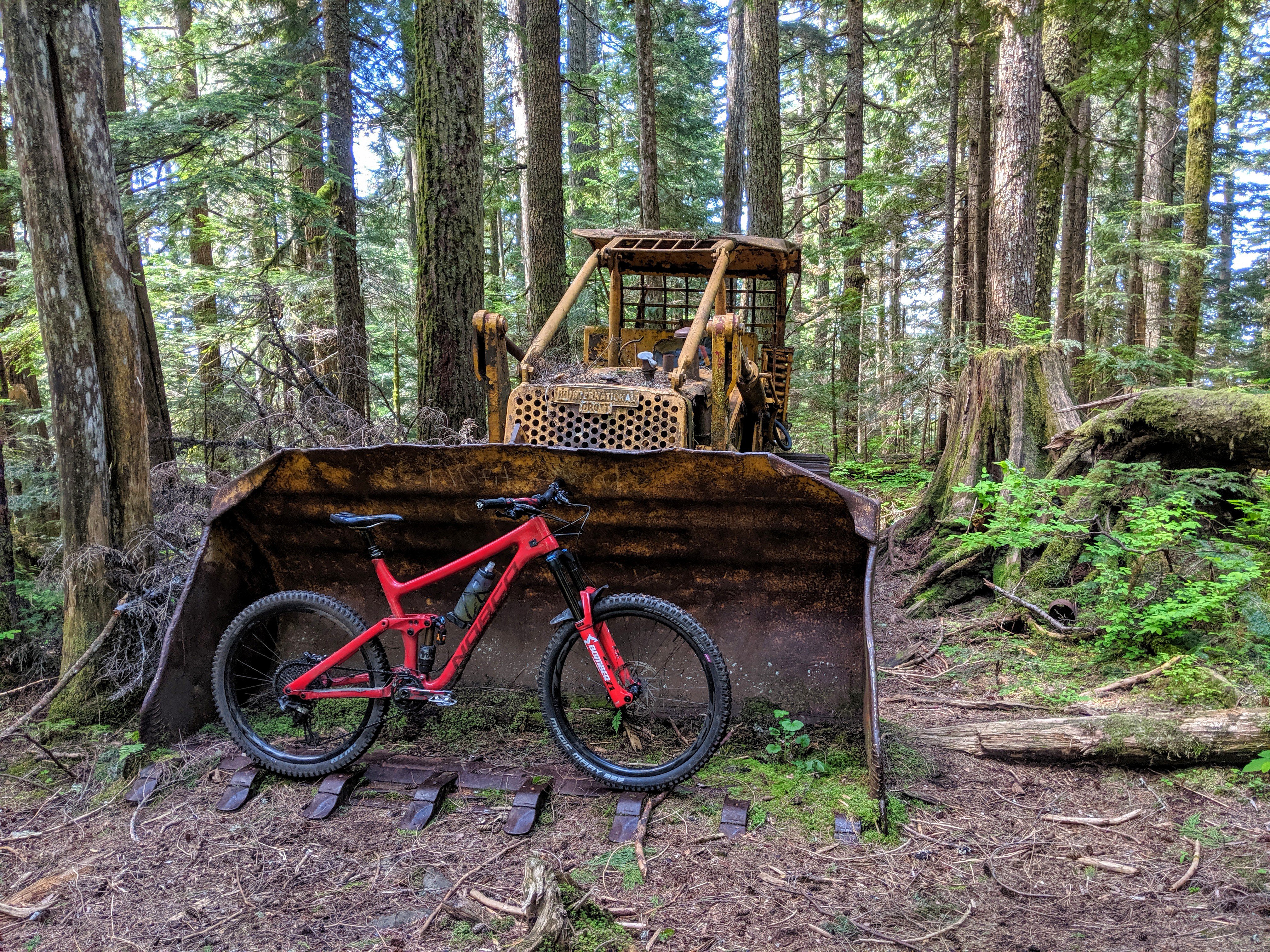 My Norco Range would be the test mule. I like Giant's understated rim graphics, so these may not be for you if you'd rather be loud and proud.

The wheels came stock with DT Swiss' 18-point engagement star ratchets. Having come off a high engagement hub, it took some time getting used to the 18 points. Once I was rolling it rarely made a difference, but on occasion I found myself wishing for faster response. I was able to track down a 36 point engagement star ratchet set, which took a matter of minutes to install and I rarely found myself wishing for more. DT Swiss offers a 54 tooth ratchet upgrade kit if fast as possible is your preference. 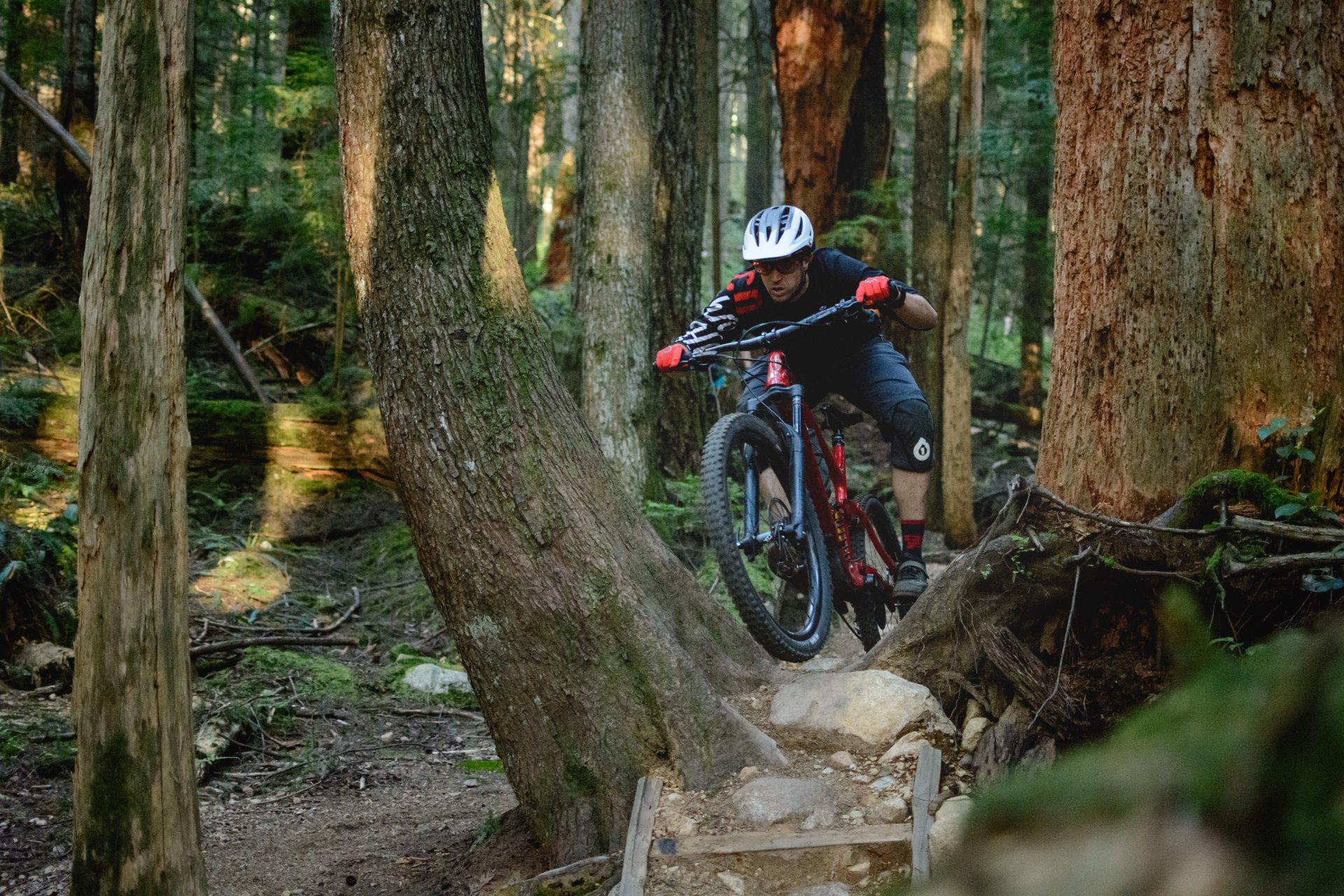 I contested most of the local Fiver World Series on the Giant TRX0 wheelset. This pic was from one of the earlier events. Photo by Dmitry Nedugov.

In terms of feel on the trail, these Giant TRX0 wheels feel very similar to the We Are One Agents I was on most recently. I noticed the lower rotational weight with the Giants however, and this difference is almost entirely in the spokes being used on the Giant wheels. The TRX0 wheels are snappy when accelerating and for my riding and aggression level I really liked the level of stiffness. Stiff enough that the wheels never felt vague, but not so stiff that they felt harsh or jarring. I'm not sure if it's the high spoke tension, but the Giant TRX0 wheels always felt very precise to me. The wheels always seemed to be tracking in exactly the spot and angle I placed them. 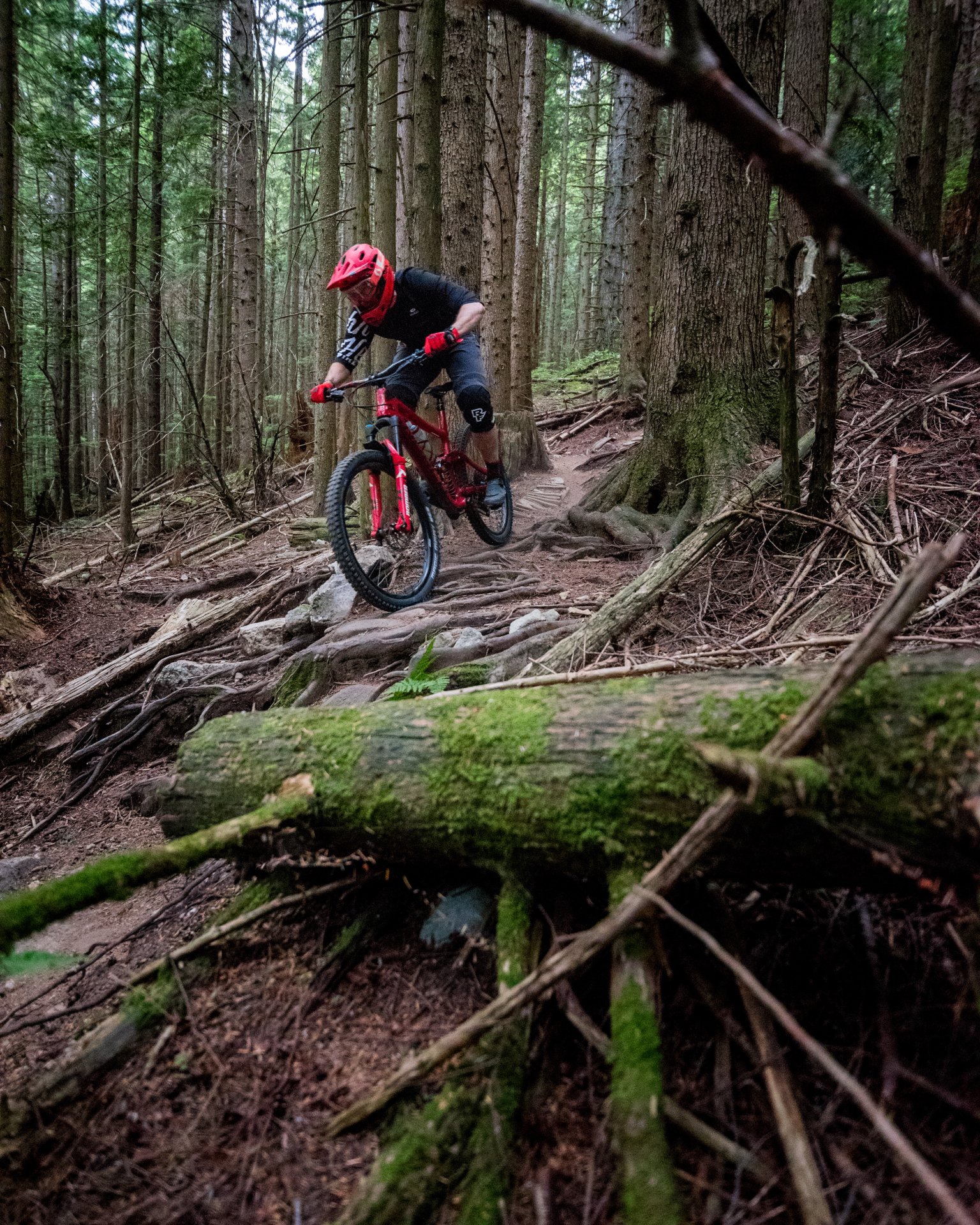 Roots and rock everywhere, yet the TRX0 wheels proved durable and precise. Photo by Dmitry Nedugov.

In this year's local racing series (the NSMBA Fiver World Series) we raced some of the roughest trails around. In one race I clipped one tree and rode full speed directly into another. The front tire took the brunt of the impact, which then twisted and bent the fork . The impact was violent, and the force to bend the fork passed directly through the wheel, which was shockingly unaffected. The wheels went on to survive another particularly harsh test; being raced down Ned's Atomic Dustbin. This trail is a fast sinuous ribbon of wheel-destroying rocks. Unless you walk your bike down you are going to smash your wheels into something hard. I raced with reckless abandon, smashed some stuff, and wound up winning the race. A post race inspection showed the TRX0 wheels were no worse for wear, without any tire inserts.

While smashing some cutties one of the spokes in the rear wheel finally cried Uncle and snapped. Strangely the spoke broke near where it crosses another spoke, and not at the ends where you'd normally expect. At first it looked like abrasion between the spokes was the culprit. However none of the other spokes showed any signs of abrasion. The spoke was on the none drive side, which eliminates chain damage. It looks like a crash or shuttle rash damaged the spoke enough that it later failed in fatigue. Luckily these spokes are fairly easy to replace. Ultimately I'm impressed with the strength and durability of the Giant TRX wheels." 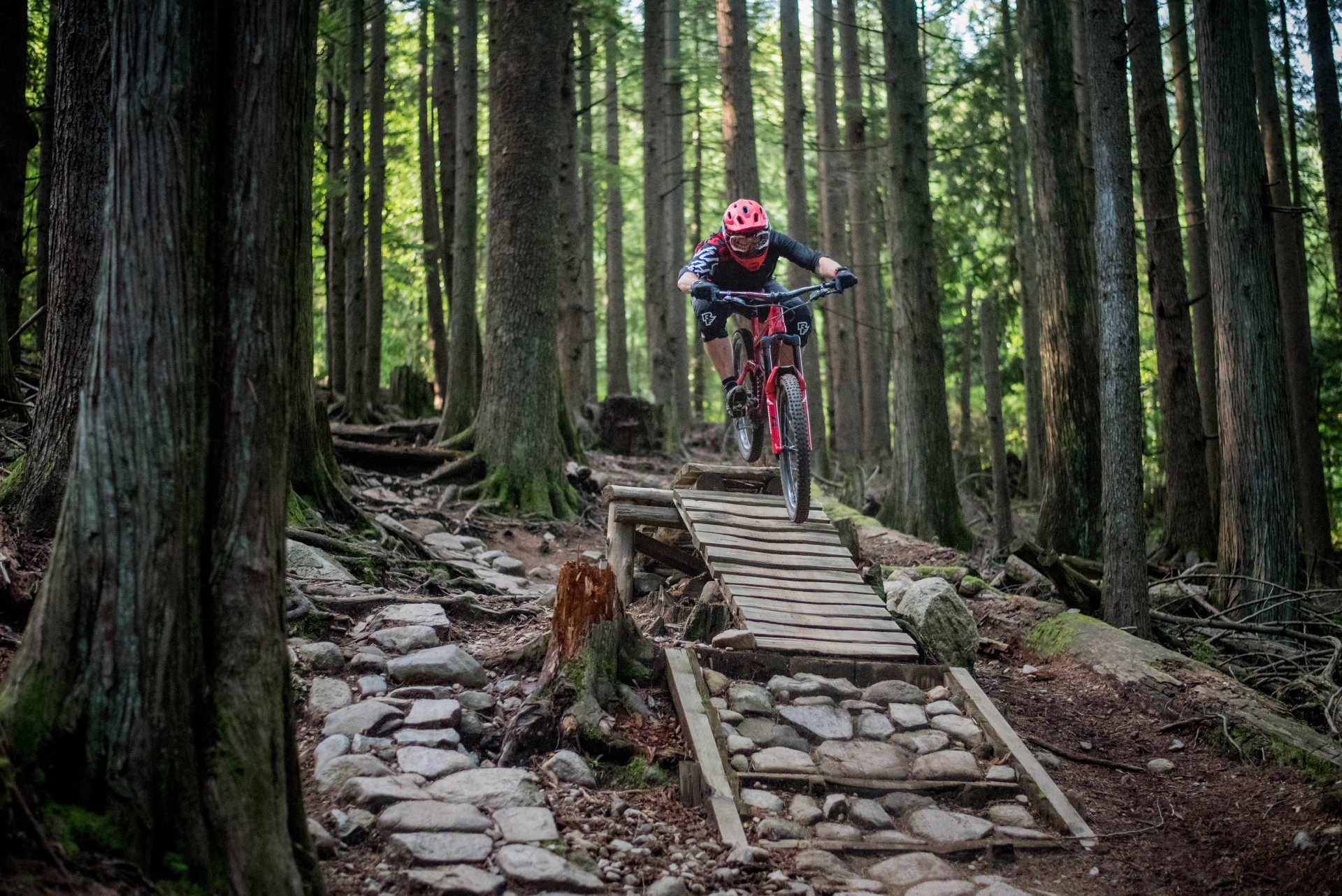 After plenty of racing on rough trails this year, it's impressive that the TRX0 wheels are still in one piece. Photo: Dmitry Nedugov.

I'll be the first to admit that I was skeptical of Giant's latest line of carbon mountain bike wheels. However the Giant TRX0 wheels proved excellent performers on the trail, and impressed with their durability. Coming in at 1588 grams for the set they were surprisingly precise and durable. They're not cheap at 2,100 CAD/2000 USD, but you are getting an excellent wheelset for that price. If that price is too steep, Giant offers a sister wheelset, the TRX1, for 1,300 CAD/ 1182 USD. The TRX1 uses the same rim as the tested TRX0, but with cheaper hubs and spokes. The Giant TRX0 seems to be a well thought out, and well executed wheelset and proved to be a top performer on the trails while exceeding my expectations.

If you're breaking spokes at the cross point it generally means that your wheel has come out of tension enough to allow significant play between spokes under high torsion (like when you're smashing cutties).  One of the great things about carbon rims is that they're stiff, and they resist coming out of round/true better than aluminum, but that doesn't mean that they don't flex, and that your spokes can't still come out of tension.   This can lead to losing spoke tension without being able to see it, resulting in more spoke play, and hence, spoke abrasion resulting in failure.  A fatigued spoke breaks at its point of highest tension, generally the j-bend, sometimes the nipple, but not mid-shaft.  Hope that's helpful.  Also, really glad to hear you didn't get hurt in that crash.  I had a similar one a few years ago, was riding an aluminum rim, and the impact potato-chipped the rim, but left my fork unscathed.  Somehow I managed to not hit the tree with my body, and just had a nasty case of skier's thumb for a few months from the force of the impact blowing the bars out of my hands.

Great comment! Everything you said is bang on, and so I went and took a closer look at the wheel. When the spoke failed I noted it was in the middle and near where the spokes cross. I saw some abrasion on the spoke, facing into the wheel, and just assumed it was from spoke to spoke contact. I WAS WRONG. The spokes are all miles apart and no other spokes have any abrasion. The portion of the spoke with the abrasion mark is free to rotate because it's straight pull. Closer inspection reveals a damage area to the spoke that must have been caused by a rock strike, crash or shuttle damage. No marks on any of the other spokes. The damage must have created a stress riser in the spoke, and it failed in fatigue. Classic case of miss diagnosed failure. I've requested to have that paragraph updated.

As for the crash. It was nasty. I just missed the tree with my head, but went right shoulder into the trunk. I don't think I've ever stopped that suddenly before. As I hit the ground I was certain I had broken everything in my shoulder. I picked my bike up expecting my shoulder to fall apart, but it surprisingly stayed together. It was sore, thumbs tweaked, but everything still moved, so I rode out the stage. I'm still bewildered I didn't break my shoulder in that crash.

Glad to hear it was helpful!  If there's one lesson I've learned from my crash, its its to aim for the spaces between the trees.  Who knew?

My experience with Giant Trx1 wheels was quite different.   I destroyed 2 rear wheels in the first 1.5 months of owning them in 2017.   Giant was great with their warranty but I could not trust those wheels at all.   I switched to a Nobl TR33 wheelset and went well over 2 years before cracking a rear rim.

Giant were the first to admit that the previous versions weren't up to task. I was still skeptical to test and trust these wheels for that reason. Giant told me the rims had been redesigned, and they'd had some fast local guys on them with good success. I ramped up the abuse on these and was quickly pushing these past the limits of my abilities with no problems. I have to say the latest versions of the TRX0 tested here proved impressively strong and durable. Its further good to hear that Giant was great with their warranty.