That’s the thing about living in Vancouver.  Once the weather goes above 20 degrees for a few hours, it’s all “Damn it’s hot!”  Productivity drops.  Tempers flare.  It’s a bad scene.  I’m going to blame this for my lack of production this week.  I think we’re scheduled for more rain this afternoon though.

What are your thoughts on Trail dogs? My Partner and I have always wanted one, but I don’t know if we should actually get one? I tend to ride back country more than big jumps and downhills, but I’m worried about how other trail users react to them out on track.

Anybody that follows me on Instagram knows that I have a dog. One that I obsessively document as I don’t really have anything else interesting going on in my life. She’s a small little thing. She can be pretty lazy, but shows flashes of energy once removed from the house. A sandy beach turns into a run-until-you-can’t-walk-any-more type of affair. Hiking on a muddy trail is another favourite. If the trail has turned into an actual creek, that’s the ultimate. She’ll bound along until covered top to bottom in filth.

Based on this I thought she might have potential as a trail dog. One day, I decided to test this premise with a quick ride in the Endowment Lands.

I thought simple would be the best approach. I walked her to the trailhead, hopped on my bike and started riding. I looked back and she was nowhere to be seen. I rode back and there she was, sitting exactly where we had started. She stood up, wagged her tail a bit, moved a foot or two, and then sat down.

Maybe she wants to be leashed, just to get the hang of it?

Maybe if I carry her part way down the trail, demonstrating the purpose of this trip into the woods, showing how fun and exciting things could be if she would just play along?

That little asshole thought this was just the funniest thing I’d ever tried to do, and she was having none of it. Once she’d broken my spirit, she just turned around and trotted back to the truck. So we packed it up and went home. Watched TV instead. I was a little disappointed, but also somewhat relieved that we were able to figure this out ten minutes from home, rather than a few kilometers into a ride. Some dogs just aren’t meant to be trail dogs. Some people aren’t meant to own one.

And here is the thing I don’t think a lot of people understand about this situation. The kind of dog that would be a good trail dog has a hell of a lot of energy and will require a boatload of exercise, every day. Perhaps this will motivate you to ride more, but I feel like it can also turn into a sort of Pray-For-Mojo type of situation once the novelty of pet ownership wears off. Do you not have a back yard? Do you struggle to ride once or twice a week? Do you honestly have an hour or two to give to your dog every day so that they get the exercise that they need? If not, consider that you might not be the ideal candidate for a trail dog.

Now, if you do decide to move forward with your trail dog experience, as far as I can tell, there are a few things to consider.

One bad exposure to a trail dog involved an un-named companion of mine who was along on one of her very first mountain bike riding experiences. We rode Pipeline, because I’m pretty bad at the whole “coaching” and “working our way up to things” thing. We got about halfway down and it was going pretty well. We hit some woodwork that caused a bit of confusion, so we stopped and let another group ride through. Once they had passed, we tentatively remounted our bikes, cautiously made our way out onto the woodwork, and their tail gunner trail dog came plowing through, knocking my companion off the woodwork onto the ground. What are you supposed to do when something like this happens? Do you laugh? Help? Quickly ride away? I think I’m still living down whichever choice I made that day. And we certainly haven’t re-ridden that trail. The point is…I don’t know. It’s just a funny story.

So. The rules of riding dogs, as far as I can tell.

1 – Keep them in sight and in control. Relatively. Ish.

3 – Make sure they have water.

4 – Bring a towel or blanket if they’re travelling in any other vehicle than your own.

5 – You’re allowed to be fat and lazy but you don’t have the right to choose this lifestyle for your pet. Consistently exercise them to the level that they require. There’s nothing worse than paying for ACL surgery for your weekend warrior dog. Poor thing.

6 – Raw food will do wonders for their turds. If your dog can clear a block when they take a dump, consider a change to their diet.

7 – Teach them to run behind the bike, not in front of it. Well. They can run in front of your bike if you’d like, but other people might not be so stoked when it happens to them.

Kiwi Dog Guy – you win a one year membership to Ryan Leech Connection (value $19 USD/month).  Ryan’s courses will make you a better rider – or you’ll get your money back. Ryan will even answer your questions personally. How sweet is that? If you’d like to snag a juicy prize for yourself, fire a question to Uncle Dave. 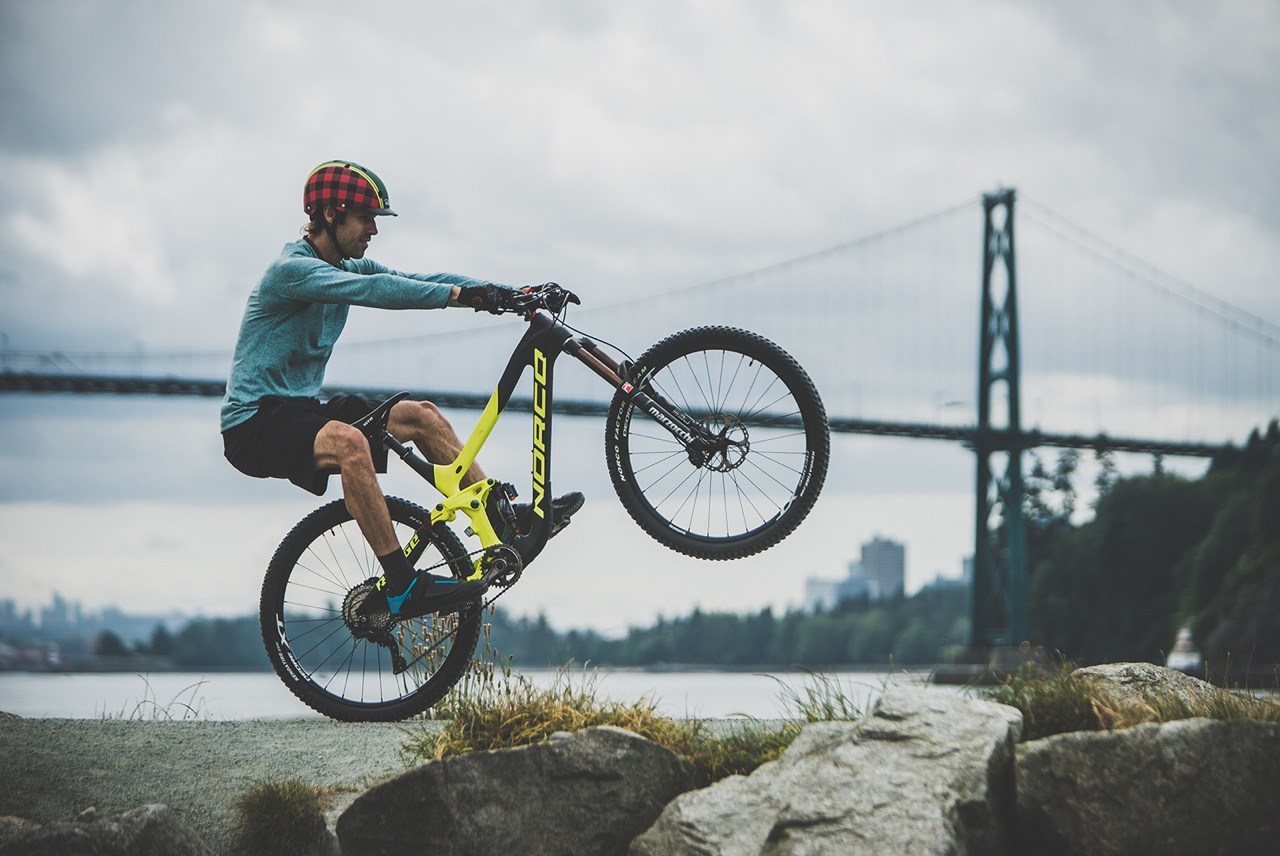 An all-access pass to Ryan’s curriculum based learning courses which cover a variety of skills such as manuals, bunny hops, balance, wheelies and more. His tutorials aren’t just about entertainment, they’re designed to be engaged with step by step. Ryan is ready to answer any questions, like your own personal coach. He champions an integrated approach to skill development in this membership site by including access to a range of custom tailored physical fitness and mental fitness practices for mountain bikers.

Do you have opinions about trail dogs?

Call it a trail dog , but really its a dog and a LONG term commitment. getting a dog to be cool is the wrong reason. I love my dogs but with cougars, bears and so forth I would worry to much about them, I always wonder who picks up the poop from trail dogs?
My best BF has a blue healer would make a great trail dog imho.

I'm also a kiwi dog owner, and like you I have tried to varying degrees of success to turn my dog into the trail variety. Breed is an important factor. For example my pooch is a german short haired pointer and as such any whiff or sight of a small furry animal, all sense & sensibility goes out the window! Thus changing the ride into a search & rescue mission! One such occasion ended up with an injured dog & 48hrs lost in a forest, ( Not to be confused with lyrics from a Cure song ).

Lower your expectations of your dog & change the experience to suit your dog. So for us this meant rides with my dog became geared towards her & her abilities & natural instincts. Hence I began training her in the art of Bike Joring, ( harness your dog with them attached to the front of your bike leading, encouraging their natural instinct to run and lead! ). It took about 3 months in a park to get the technic & trust sorted between man, beast & bike. But now my pooch gets to come riding albiet a slightly more tailored definition of the "ride".

Word. We have a long-haired Daschund, appropiatelly named "Buster" -as the one in Toy Story II. He got turned into a trail dog since he loves to follow my three-year-old son wherever he goes. When the little weekend warrior made his debut in our local trail system, we couldn't keep that furry frankfuter from climbing into our van and following us down. He might not like jumping, but he loves to run behind my son's bike. And with just some minor bruises he learned pretty fast to look for the chicken line in every jump.

Honestly, I don't think there is one kind of trail dog. Some breeds might adapt better than others (I don't think I'd get to see a Poodle running down a trail anytime soon), but in the end, your dog will follow you wherever you go. You just have to get It used to the kind of activities you enjoy at a short age. I guess you can't really teach new tricks to an old dog.

Keep your dogs at home. They are menace on the trails.

And also keep your humans at home too, they are a menace on the trails.

Indeed! Just two days ago I was menaced by a dog on the trail. He sniffed me! And then he wagged his tail and tried to lick my hand! It was outrageous! The passive aggressive stare I shot his owner was a sight to behold.

Beware of the flesh whips attached to those beasts' rear ends. There are storys going back as far as the Greek of mighty warriors beaten to death with them.