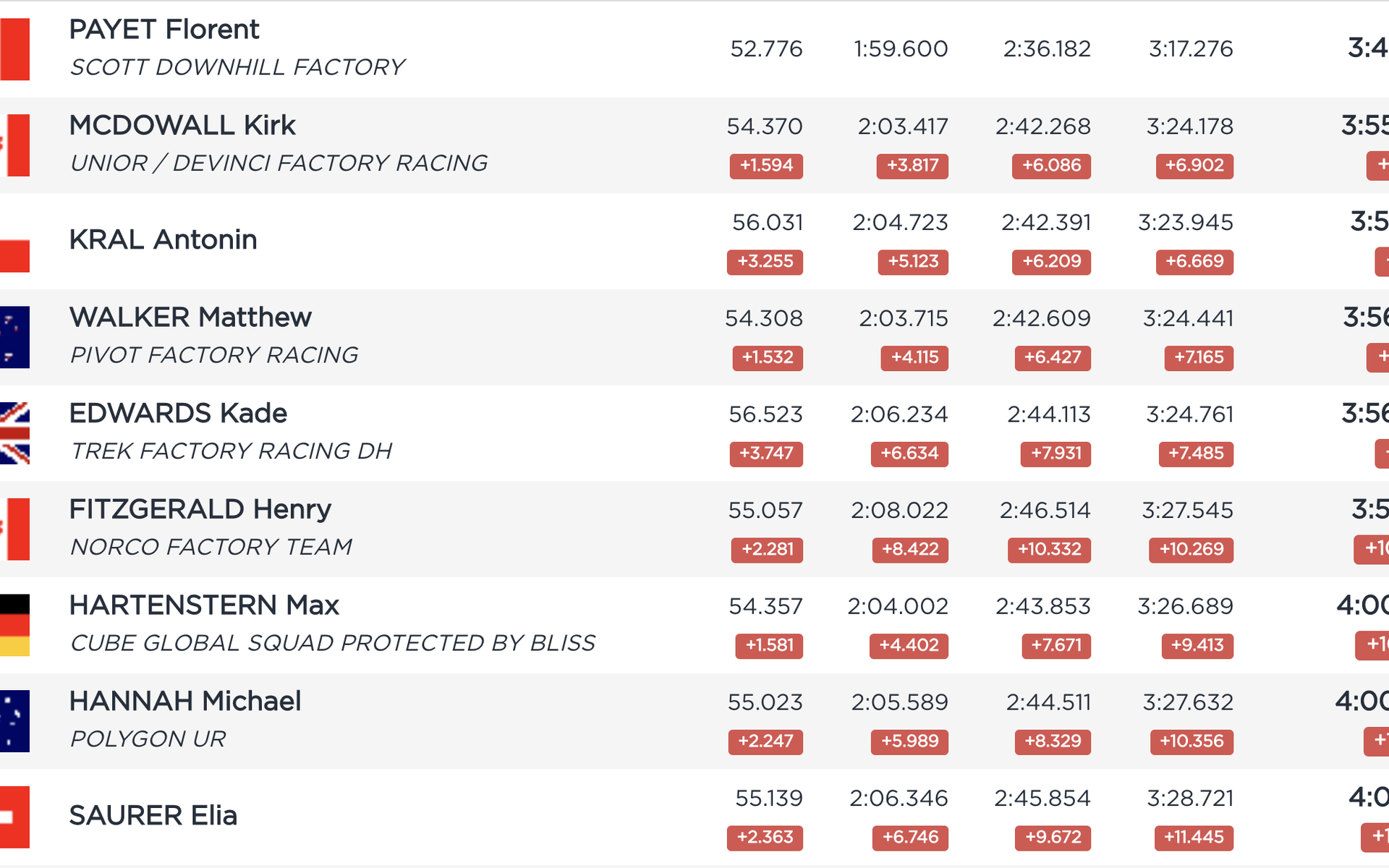 By the time the elite men hit the track for their race they were going into the best conditions of the day. Practice in the morning was wet but by the time the top 20 men dropped in, conditions were perfect. It doesn't make for the fairest racing but in a fully dry weekend the top 20 have the most blown out track to deal with. The wild qualifying conditions also meant that on race day, the top 20 was filled with a range of different names and some of the fastest would drop in earlier than usual.

Flo Payet was one rider in this position and went into the hotseat before the top 30 had dropped. Payet has done well here in Val di Sole, securing a medal in the 2016 World Championships. He held onto the top spot for a while but Baptiste Pierron, Amaury's brother, came down on a screamer and took the top spot by more than three seconds.

Baptiste remained on the hotseat for ages too. It wasn't until Charlie Hatton of Atherton Bikes that anyone was threatening Pierron's time. Hatton was unsuccessful though, just missing the top spot and going into second. The denim jean clad XXXX had a wild run and got the crowds support. Clearly louder than the riders before him, the privateer came down fuelled from the fans lining cheering him on and pushed into third, bumping Reece Wilson down to fourth.

Dropping into the top 20 and Baptiste Pierron remained on the hotseat. As riders descended Pierron's time looked better and better. Shaw and Iles couldn't even touch it, It wasn't until Trummer that anyone looked to properly challenge Pierron's time. He pushed closer through each split and put the fastest time in at the fourth split, holding onto it to the bottom. He took the hotseat by 0.7 of a second.

Gee Atherton dropped in looking smooth and fast, and it worked. By the first split Atherton was already up. He took an interesting inside line in the third section but was unable to hold the lead and dropped more than a second. As he fell further down the hill so did his time, losing more valuable seconds to Trummer. He crossed the line in eighth place.

The first of the three (French) musketeers to come down was Loris Vergier, and he did so in style. Vergier was on the move and up at the first split. By the second split he was more than two seconds up but dropped some time through the following splits. He still did enough to take the hotseat by more than two seconds, building back his lead in the last split.

Immediately following Vergier was the GOAT. Minnaar hit the track with laser like precision, keeping it clean as he attacked the track that he's previously confessed scares him. He was up by almost a second when disaster struck. Minnaar looked to have gotten off-line and missed the corner he was setting up for. With the crash he was still able to cross the finish into third.

Loïc Bruni followed Minnaar's lead, smashing the track with unbelievable precision for such a wild track. Bruni held the fastest time from the first split and built on it down to the finish line. He crossed the line with a two second lead and eleven riders to go. He said he didn't ride smooth and felt bad on track—if his run wasn't considered smooth I can't wait to see him ride at what he feels is his best.

Mr. Consistent, Troy Brosnan, was unable to challenge the time set by Bruni. At the second split Brosnan was down by more than two seconds. He lost more time as he progressed and crossed the line in sixth place with ten to go. Brosnan hasn't been off the podium (top 5) this year and it was in Fort William 2018 that he last posted a result off the podium.

Danny Hart, who's won a gold medal on the VDS track in the past, dropped in looking strong. At the first split he was up by more than a second and remained consistent through the middle of the track. He rode smoothly through the rough terrain, showing that he no longer has to ride ragged and on the edge like he used to in order to be quick. But at the final split he was down by less than a second and when rounding the famous final left berm out of the fade-away he slid. He had a flat! Hart jumped on the pedals, hammering as hard as he could through to the finish to salvage whatever he could. He crossed the line in third place.

Silver medalist on the Val di Sole track at the 2016 World Champs, Laurie Greenland dropped in looking comfortable immediately. He took the fastest first split and built on his lead as he flew down the mountain. As his run progressed Greenland started looking more wild and by the bottom was absoliutely on fire. By the fourth split Greenland was more than two seconds up on Bruni's time. A risky inside line on the final large berm was enough to slow him down and he crossed the speed trap at more than 65km/h. Greenland went into the hot seat with only seven riders to go.

Sith place qualifier, Amaury Pierron started his run clean and smooth. Once he got into the woods he began to show his brilliance, with unique lines to Laurie Greenland, but it wasn't enough. He was down by more than a second at the second split. As Pierron's run progressed his chance of beating Greenland's time faded. Amaury went into fourth place, more than four seconds off the pace. Pierron said he couldn't get in rhythm with the track today and kept making mistakes. The winning streak of the French was done, thanks to Laurie Greenland. He also stopped the three musketeers from getting their dream one, two, three, and they had to settle for second through fourth.

Greenland finally takes the first World Cup win of his career after coming close numerous times in the last couple of seasons. And while his run looked wild at times, he looked heaps cleaner than he has in the past. The work he put into his riding technique and body positioning on the bike during the off-season is now paying off.

After an excellent first half to the season, Nina Hoffmann struggling for the second race in a row. She had a big crash in her run, throwing her front wheel out of true and surviving the rest of her way down the course. VDS was another race weekend she'll likely want to forget. Camille Balanche backed up her great fifth place qualifying time. She knocked Emilie Siegenthaler from the hotseat by more than eight seconds with only four riders remaining.

Fourth place qualifier Eleonora Farina was on a good run until the steep, rough track got the better of her. That put her back from Balanche's time and although Farina soldiered on—riding well the rest of the way down the track—she couldn't claw back the time. Adding insult to injury, Farina got a rear flat toward the bottom of the track. She was clearly frustrated by her run in the finish area but still posted a top five time, with only three riders remaining.

Veronika Widmann was riding confidently, hitting some of the more aggressive lines on the gnarly track. She was up by almost two seconds at the second split but crashed, losing time. She was able to continue and clawed back time toward the bottom. In the finish area she was visibly in pain from her crash, holding onto her stomach after crossing the line. She still managed to come down into second place with only Marine Cabirou and Tracey Hannah remaining.

Marine Cabirou made it through the section that had taken out the two Italians before her. By the third split Cabirou was up by 13 seconds on Balanche and she continued to build. Cabirou whipping the finish line jump with style as she came down with more than 18 seconds on Balanche's best time. She rode confidently the whole way down, pushing her luck and keeping it together. But was it enough?

Tracey Hannah dropped in and began her run smoothly. Once in the woods she remained cleaned but visibly looked to be pushing less than Cabirou. By the first split Hannah was already more than five seconds back. A massive moment just before the second split almost saw Hannah hit the deck, but she held it upright. It didn't matter though, Hannah was still back from Cabirou and bleeding time and by the fourth split was back more than 12 seconds.

Tracey managed to get a second back in the last split but it didn't matter, Cabirou had torn apart the competition for her first World Cup win, on the toughest track of the year. She beat current World Cup series leader Tracey Hannah by more than 11 seconds!

In the junior men's race the top qualifiers were well down the top ten. Elliot Jamieson and Seth Sherlock weren't able to hold onto their incredible finshes from the day before, ending up in ninth and sixth respectively. The Italian track also looked to get the better of series leader, Thibault Daprela; a crash in qualifying and another in his race run saw him drop well down the finish order. He lost 10 seconds in his crash and despite battling on down the rest of the track, finished in twelfth place, more than 10 seconds back.

Kiwi junior, Tuhoto-Ariki Pene didn't post a single fastest split until the very last one. But he rode consistently and by the finish line was in the green, barely. He won by just 0.33 over Zak Gomilscek. Australian junior and Canyon Factory Racing rider, Kye A'Hern put down a solid run, posting the quickest time in the mid section of the track, and secured third place, just 0.4 from Pene. Incredibly tight racing from the Junior Men on a track like VDS.

We have another new winner this weekend! A bad third split for Valentina Höll saw her lose time to Atherton Racing junior, Mille Johnset, who put time into the Austrian down the second half of the track. Johnset took her first Junior World Cup win by more than a second over the previously unstoppable Höll. It's not clear if Valentina crashed and hurt herself, but she was up by more than two seconds at the second split but lost time from the third split down.

Anna Newkirk remained consistent and secured third place. She was nowhere near the times of Höll and Johnset though, who appeared to be on a different track. Newkirk finshed more than 27 seconds back from them but still rode strong enough to put herself almost 25 seconds ahead of fourth place rider, Lauryne Chappaz.