Just like it says on most of the dating profiles of twenty-somethings on Plenty of Fish, it seems that cyclists are down for trying anything once. At the Interbike Dirt Demo the “jerks” were out in force rolling around the desert on balloon-sized rubber.

We have resisted posting much on fat bikes from Interbike so far, but it can not be ignored how much fatbike gear there was around the show hall. It is happening people, even the bike rack manufacturers are getting in on the buzz with fat bike compatibility. As you may recall Morgan has been dabbling in the more hirsute side of tire widths and has taken on the role of our chubby rubber correspondent, so you can expect to see more thoughts from him on this over the winter.

Once indoors there was a stand chronicling the rise of the fat bike phenomenon curated by QBP, which has both Surly and Salsa in its portfolio. 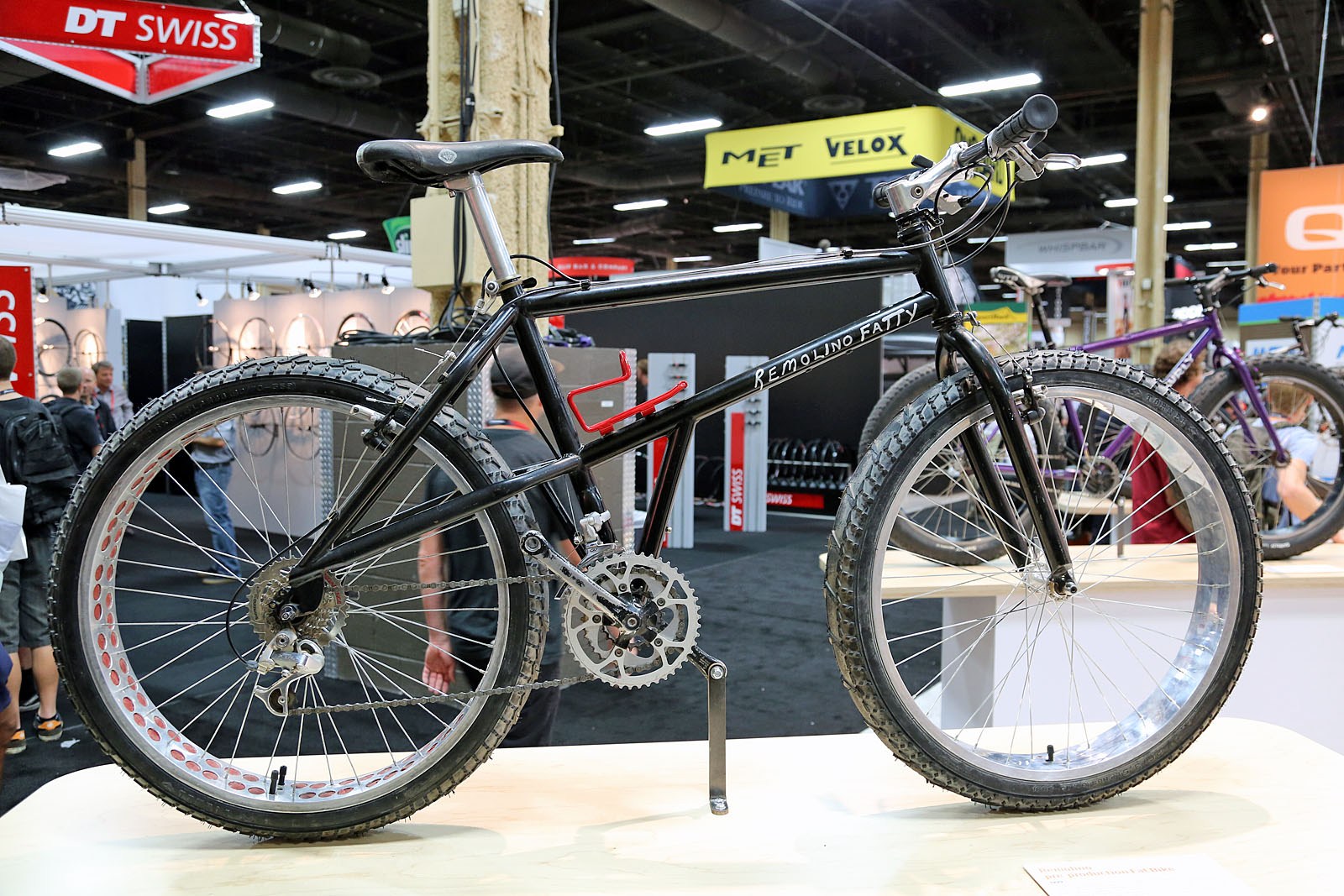 Proving that the Fatbike took longer to catch on than 29er wheels, the Remolino Fatty dates from early 1999. The frame looks very similar to a Nishiki Alien or other elevated chainstay bikes of that vintage. You may notice that the rear wheel has two valves protruding from the rim. At the time fat tubes were not available so two normal sized tubes were used. The tires on this bike were made by adding a extra section to an existing mold. 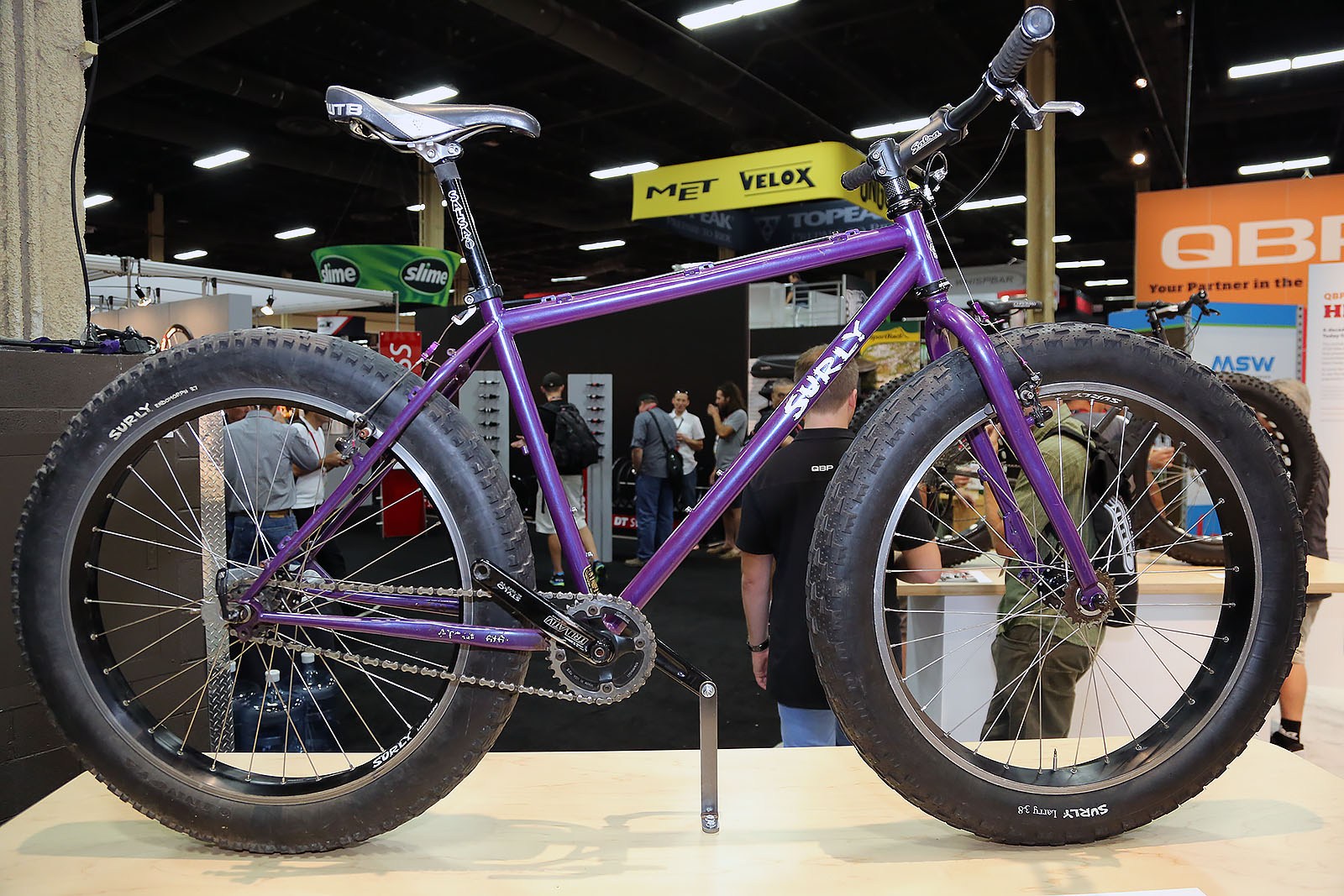 It took 6 years for the first production frame to arrive. The crystal ball at Surly seemed to be working well and the Pugsley was the outcome. The TruVativ Stylo crank was one of the few options that would fit the 100mm wide bottom bracket that was needed so that the chain would clear the rear tire.

Jumping to 2012 and the Surly Moonlander was designed to have clearance for massive 4.8″ tires. It’s claimed that the float from these balloon like rubbers allows you to probe previously inaccessible terrain. 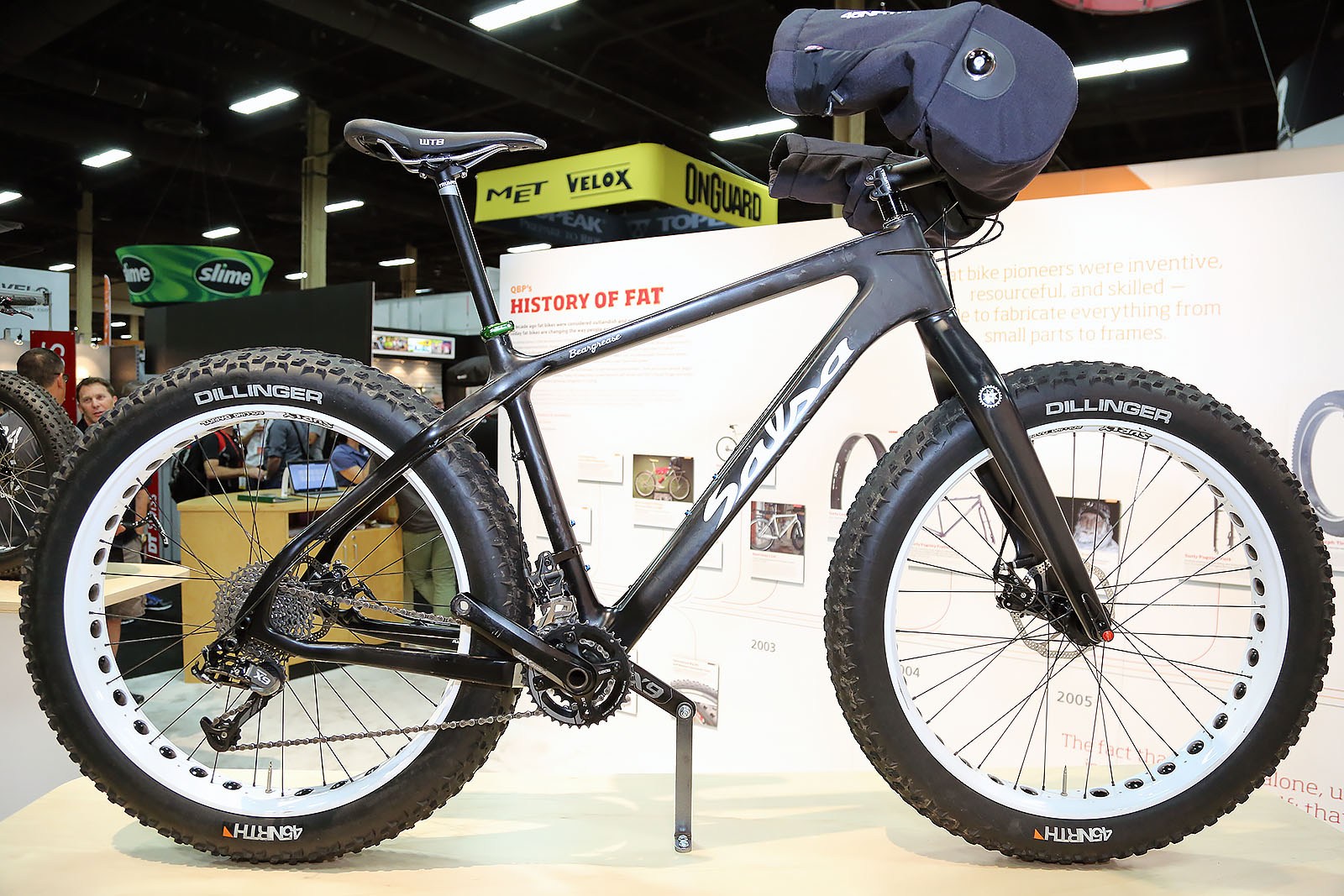 Bang up to date with the Salsa Beargrease. Designed with geometry specifically for the rigors of fat bike racing, this machine was the first carbon fat bike. 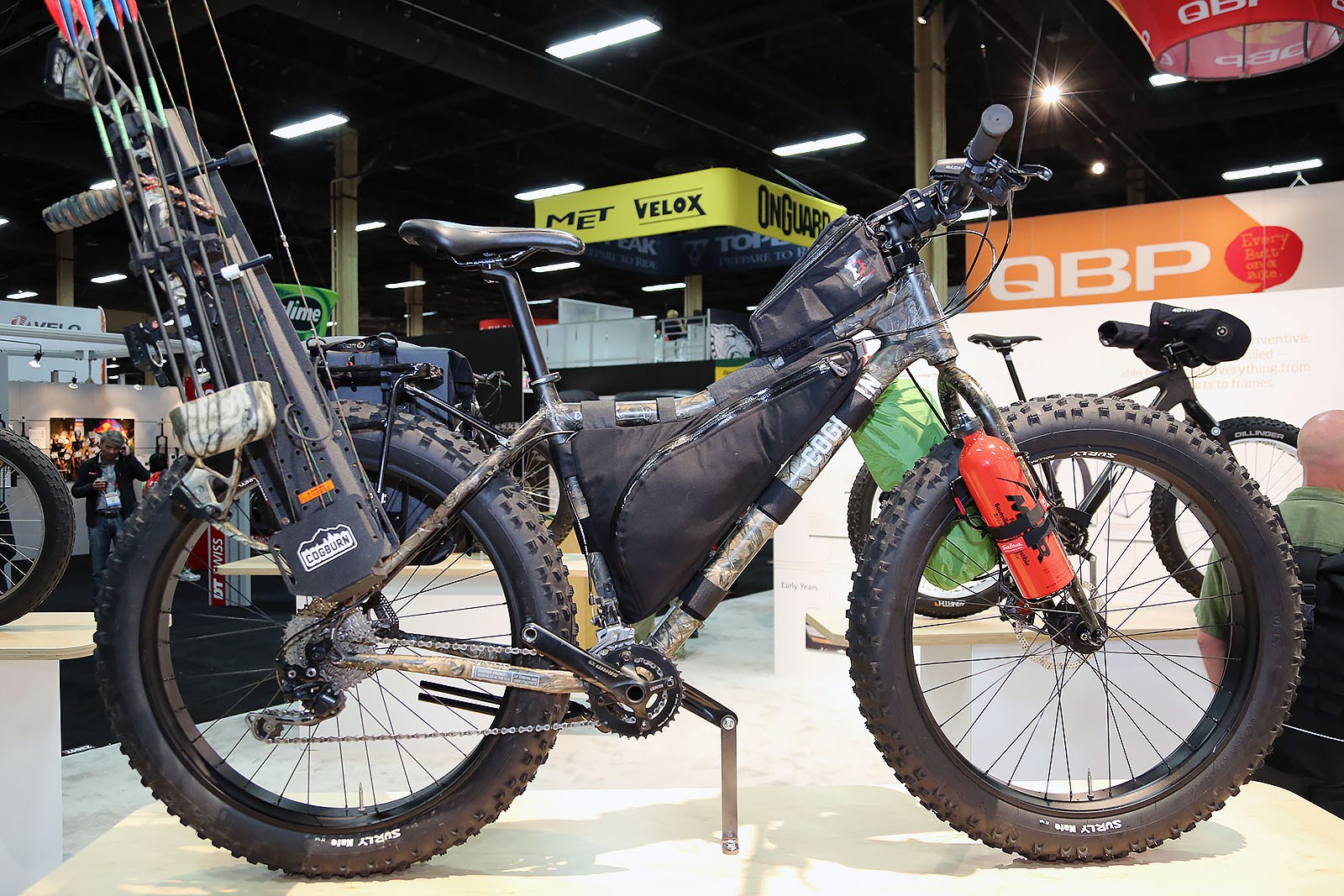 I’m calling this the Alaska edition fat bike, decked out and ready for a hunting expedition. I can see Specialized getting something like this together for Matt Hunter to use the next time he decides to go feral. It is actually a Cogburn CB4 and features a RealTreeTM camouflage paint job so that you can avoid anyone seeing you ride it in the woods. The dropped top tube helps with jumping off the bike quickly when you spy that big buck. 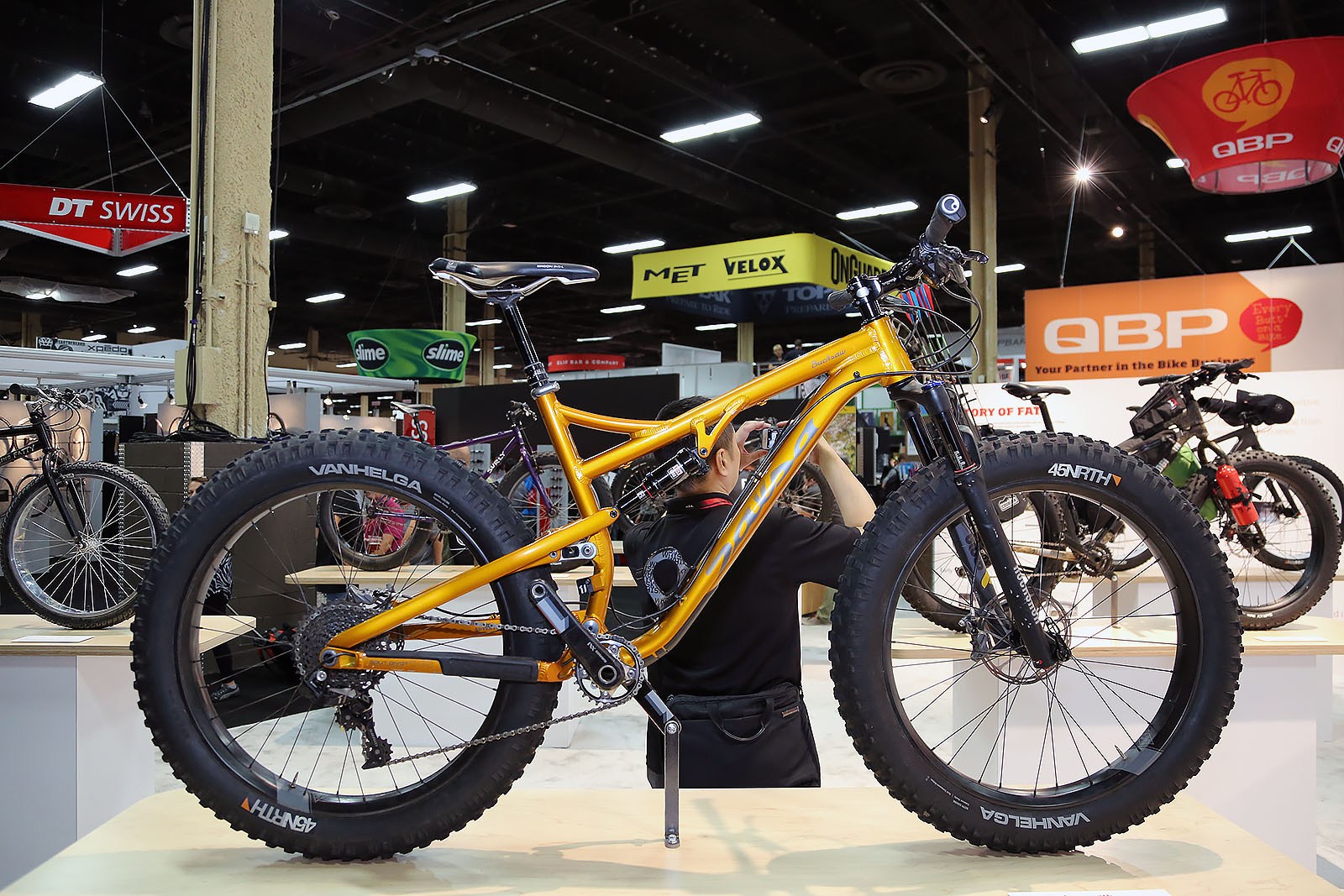 And finally a peek into the fat future with the Salsa Bucksaw that is due for release soon. Dave Weagle apparently co-designed this bike to maximize the interplay between suspension travel and the traction that a fat bike’s tires can find. Given the travel that you get with a fat bike tire itself I’m not convinced, but it’s a nice first-of. Hopefully the rear suspension is designed to be active even when there is oodles of snow packed in behind the bottom bracket. 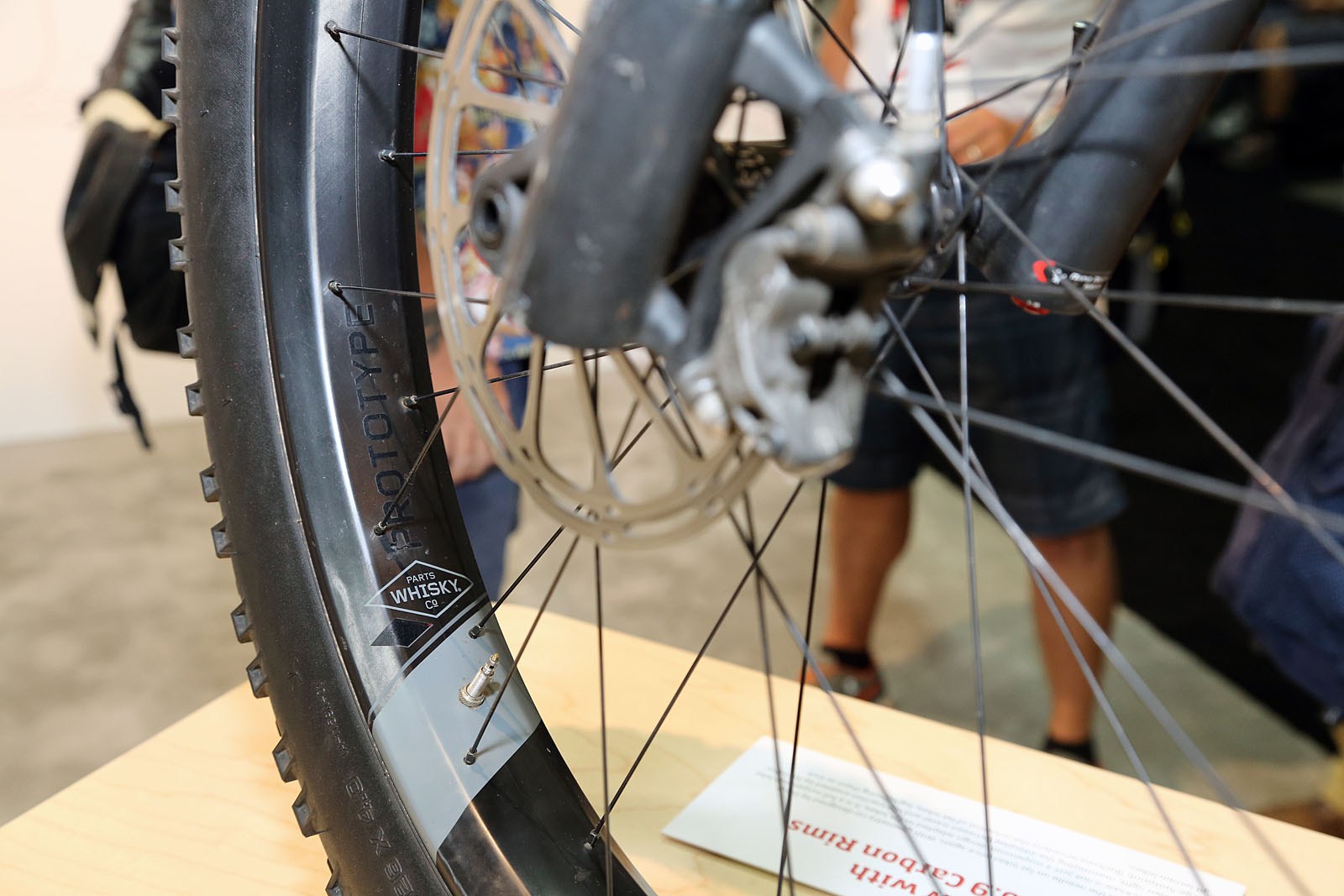 We did spy these prototype carbon fat rims. The Whiskey No.9 rims are due to be released in 2015 and are tubeless compatible, meaning that you can shave several pounds in weight by ditching the horse prophylactic-sized tubes. The 70w in the name refers to them being 70mm wide externally and they apparently weigh in around 575 grams.

It seems like all the jerks at Interbike were chubby chasers this year.

Kinda funny that a move like this didn't start south and move north. Born in the north and finally picked in the south.

Fat bikes are a blast! We are thinking about getting a pair for this winter after renting a few times last winter: