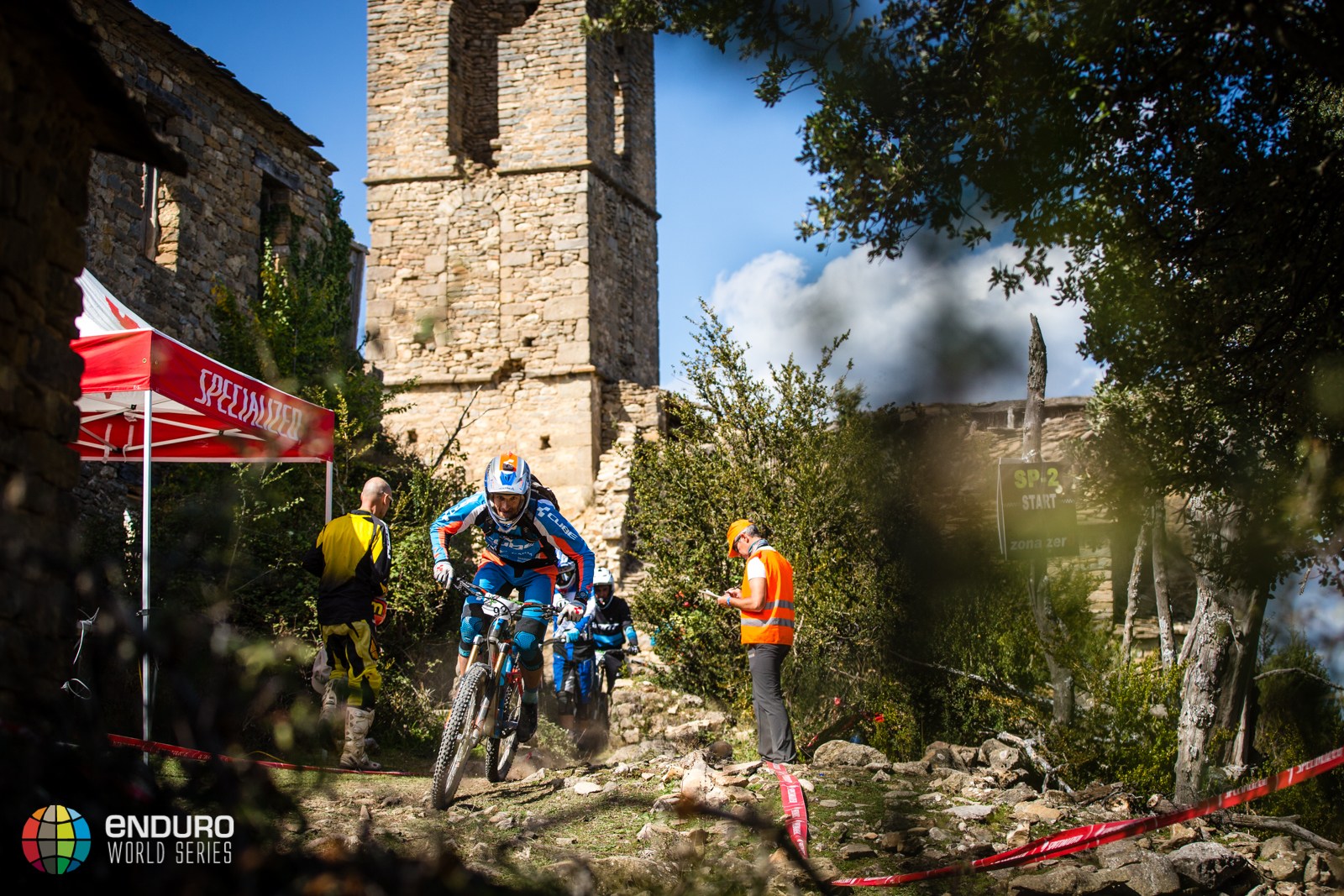 When your race village is within the walls of a twelfth century castle and riders race through ancient cobbled streets, it’s bound to leave an impression – but that’s not the only reason Ainsa will be go down as a legendary race. The most extreme weather the series has ever encountered forced the cancellation of a stage – but even flash flooding couldn’t dampen the spirit of this event. 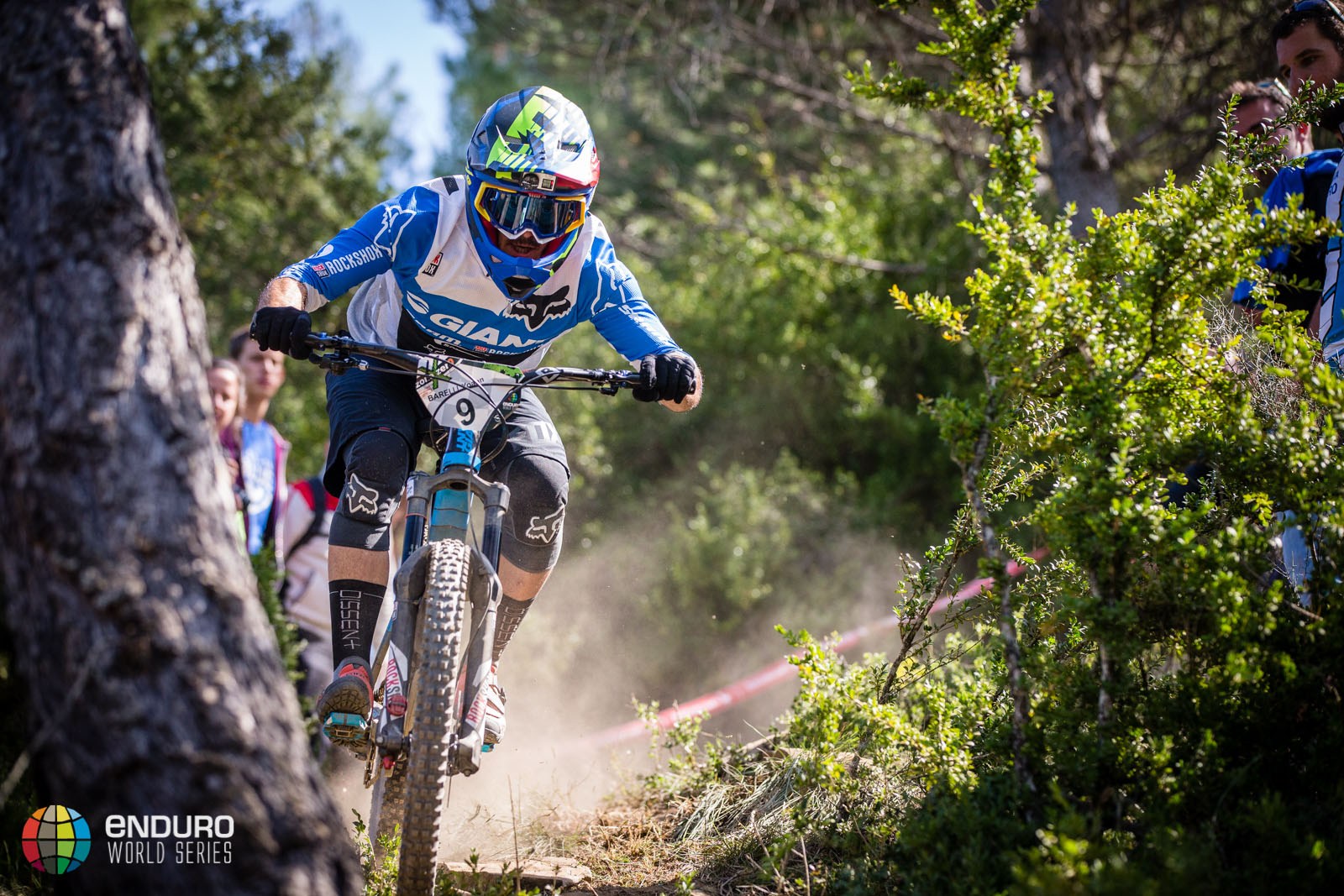 Whistler local Yoann Barelli made it to the podium.

Stage eight, the last of the day, was cancelled after torrential rain led to flash flooding turning the track into a river. The results were taken from the first seven stages and therefore it was Tracy Moseley (Trek Factory Racing Enduro Team) and Richie Rude (Yeti/Fox Shox Factory Team) who took the win. 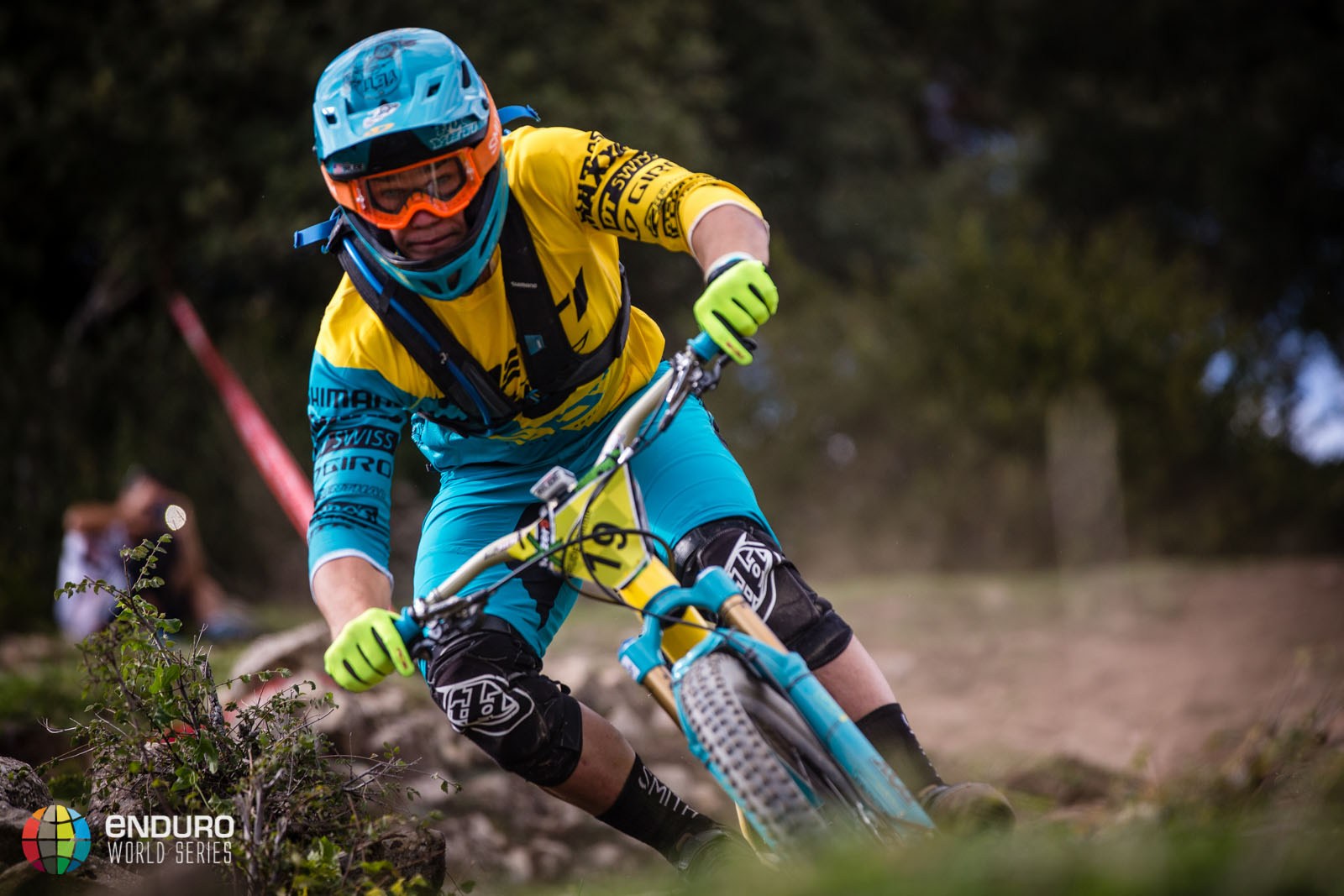 Rude had the ride of this life taking all four stages on Saturday, but Sunday was more of a mixed bag as he failed to win any stages. His blistering pace meant he still finished 20 seconds ahead of the rest of the field. There was no such gaps between second and third place – less than a second separated Yoann Barelli (Giant Factory Off Road Team) and Martin Maes (GT Factory Racing) respectively. 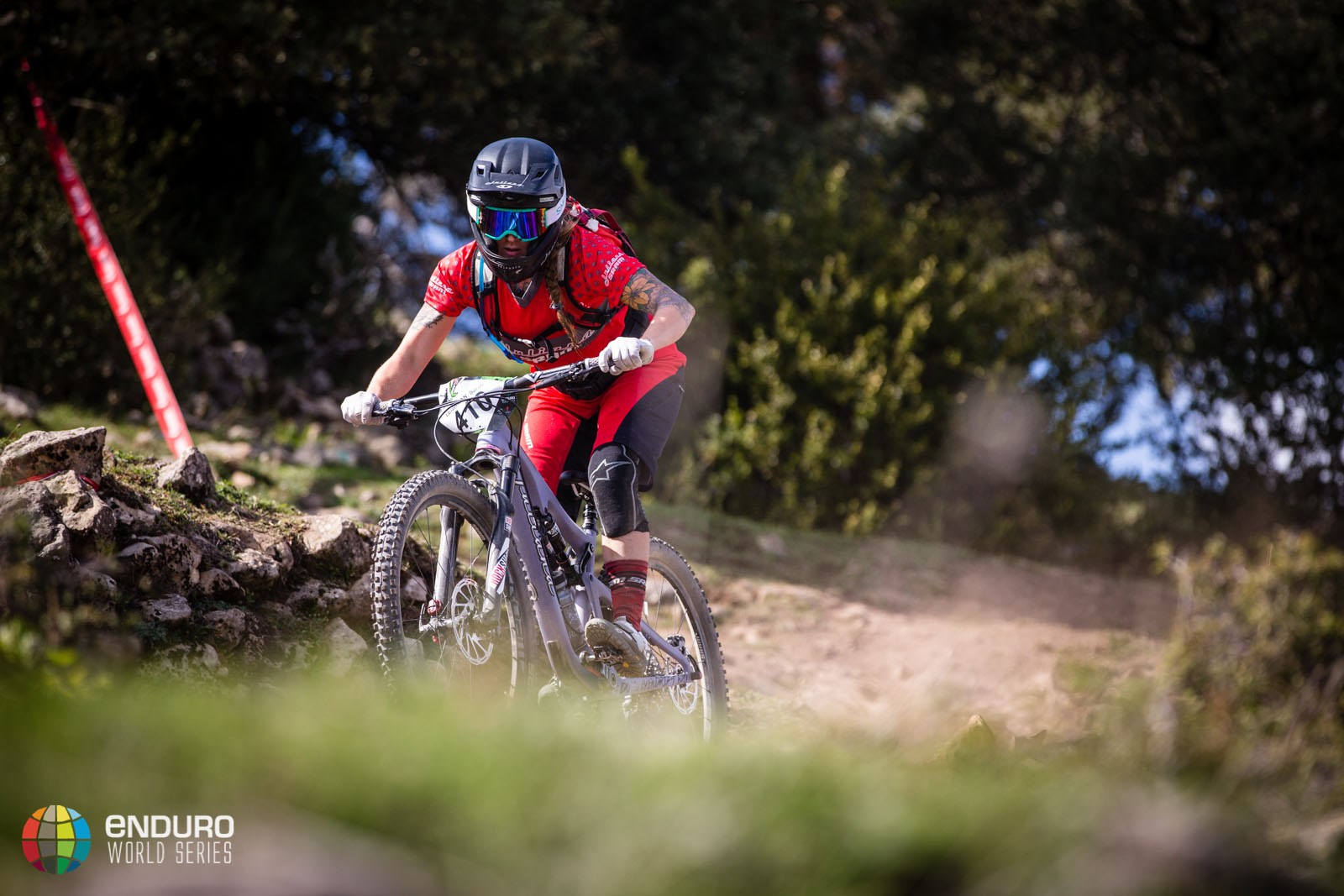 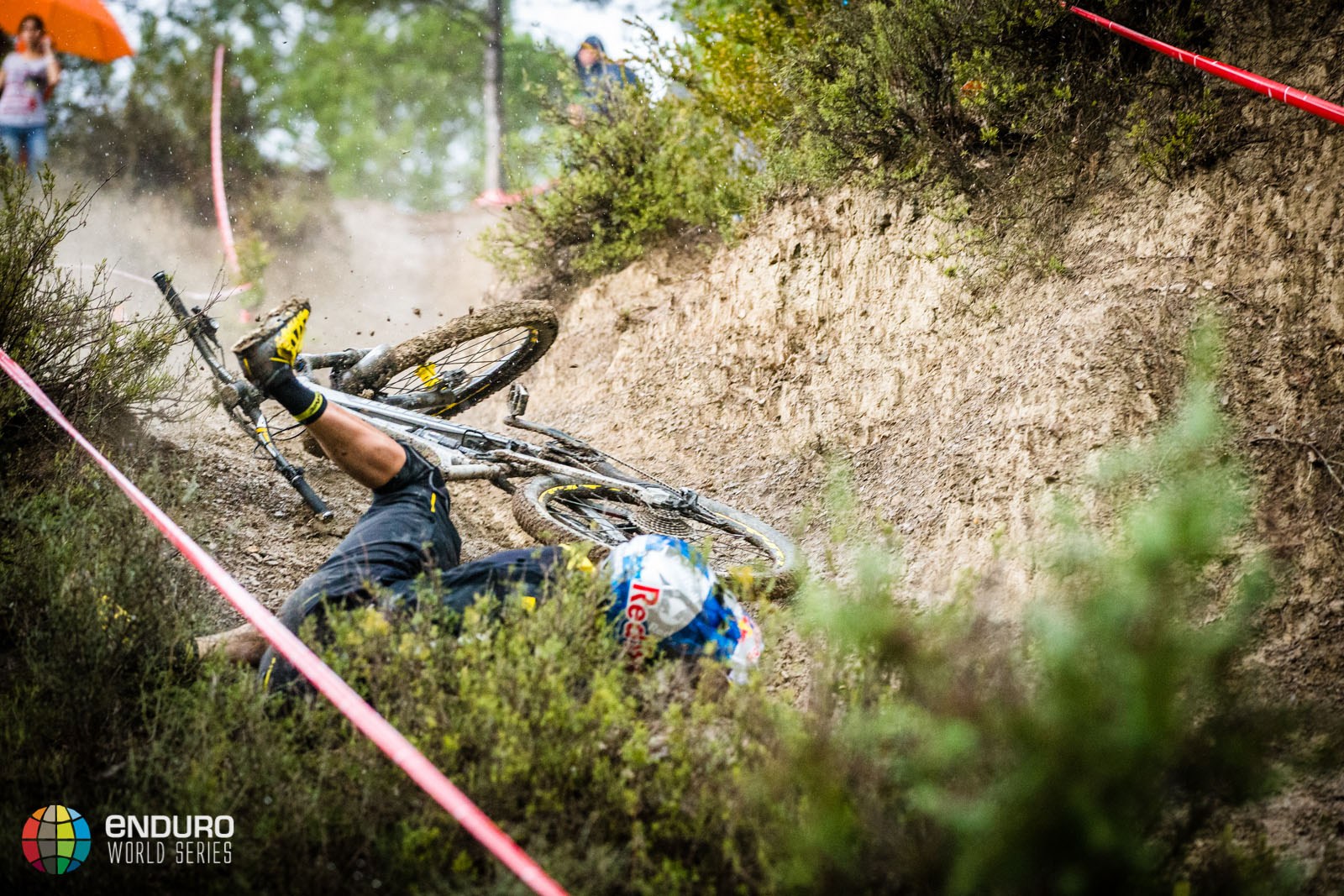 Matti Lehikoinen found the grip limit when the rain began to fall.

And whilst the weather was as dramatic as the setting, it was the crowds of Spanish fans lining the tracks that Ainsa will be remembered for. Every stage was lined with thousands upon thousands of screaming fans, helped along by the bars that had been carried out to every stage. 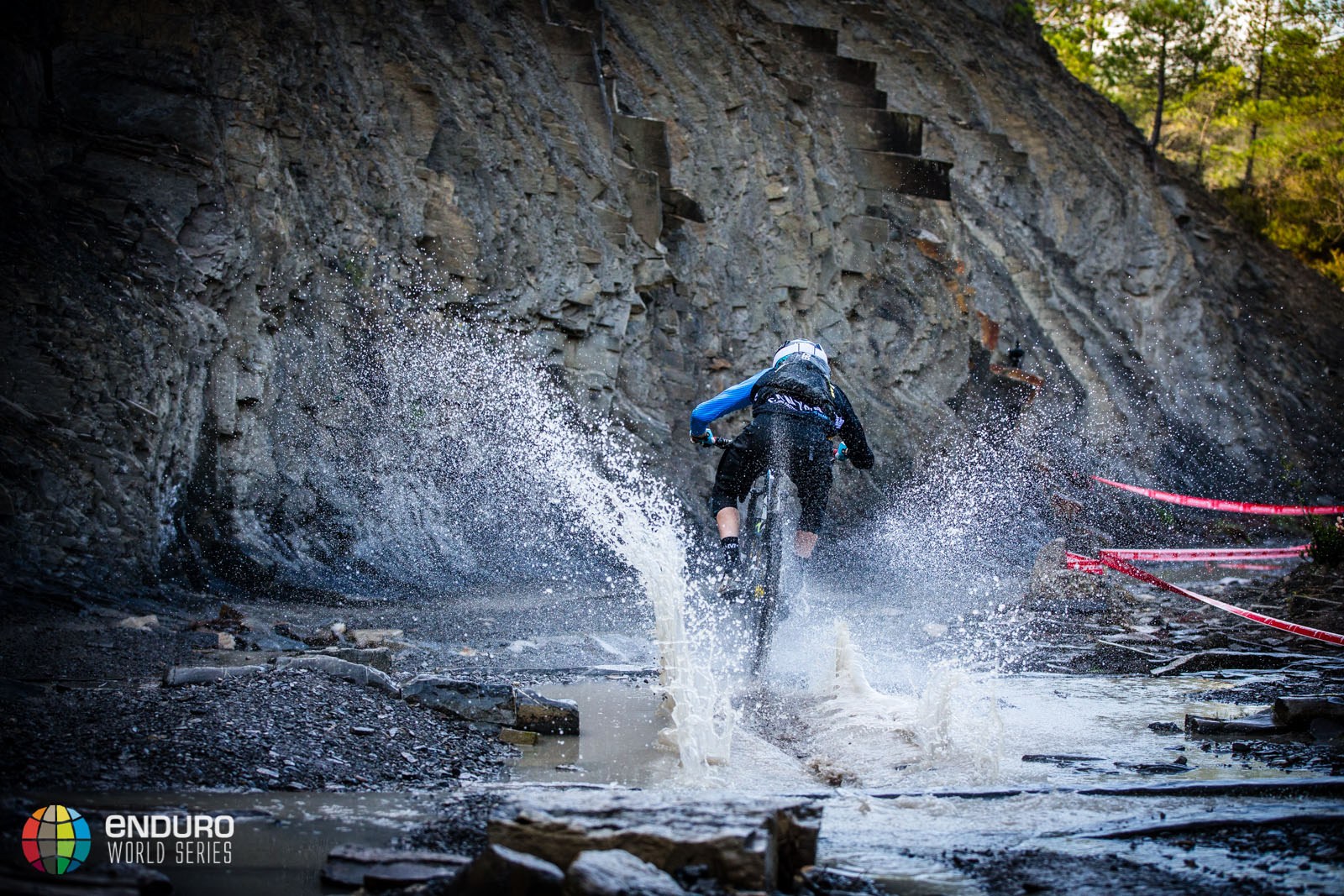 Speaking after the race, Tracy Moseley said: “It was a good day the first three stages Cecile was close all day and I just wanted to make sure I was safe but still pushing hard – she definitely pushed me this weekend which was cool. Unfortunately the last stage of the day was a washout and ended up sliding down the track on my bum with the help of a load of spectators like everyone else, it was the only way we could get down. It was an epic end to an amazing weekend and I can’t wait for Finale now.” 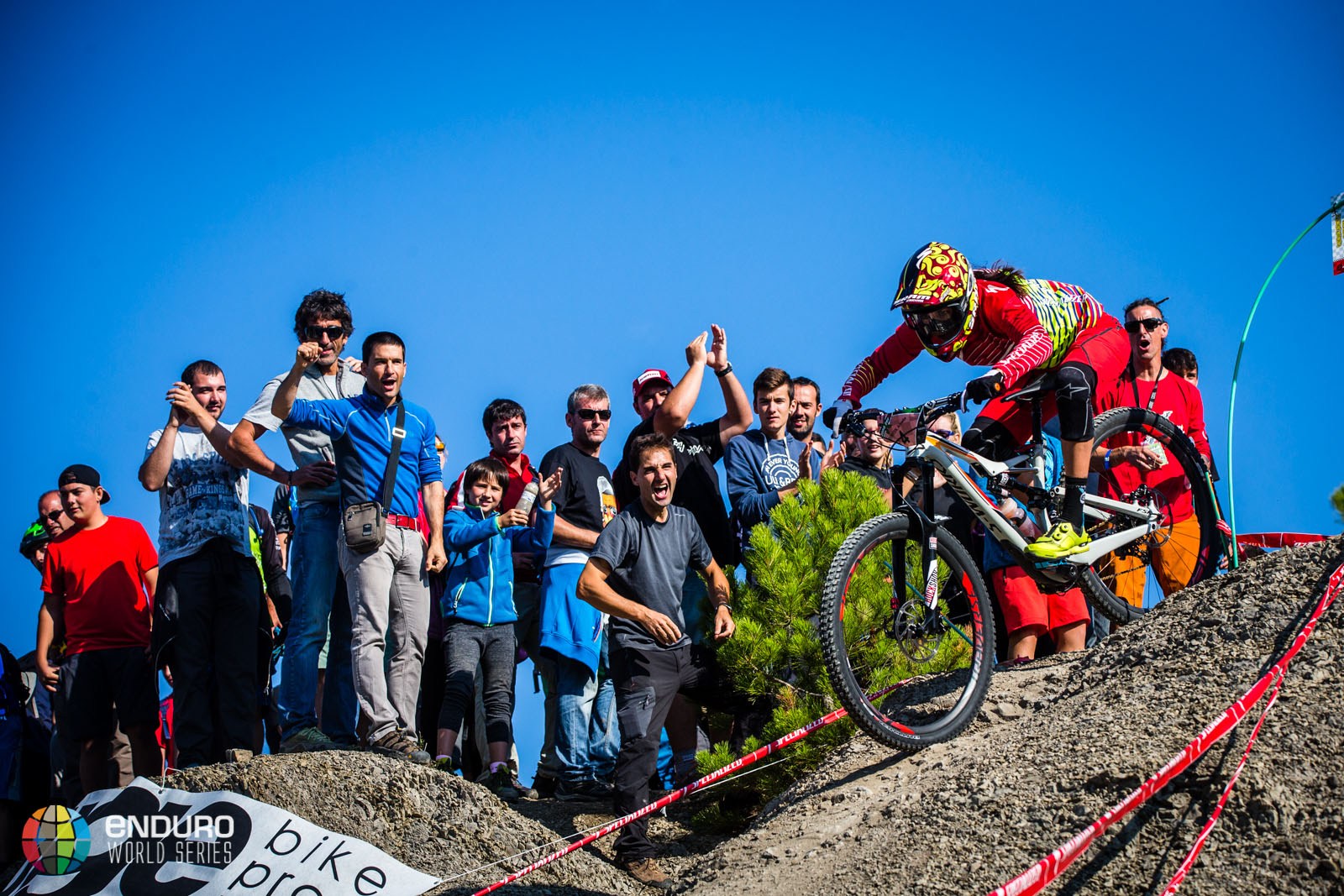 Cecile Ravanel, with the weather looking pretty good, for the moment.

Richie added: “It feels good to win, when you come into a season you never really know what exactly will happen and I was kind of expecting top fives this year so to win three in a row -I  thought it would never happen. I’m pretty stoked with it and now I’m just hoping finale goes  smoothly now.” 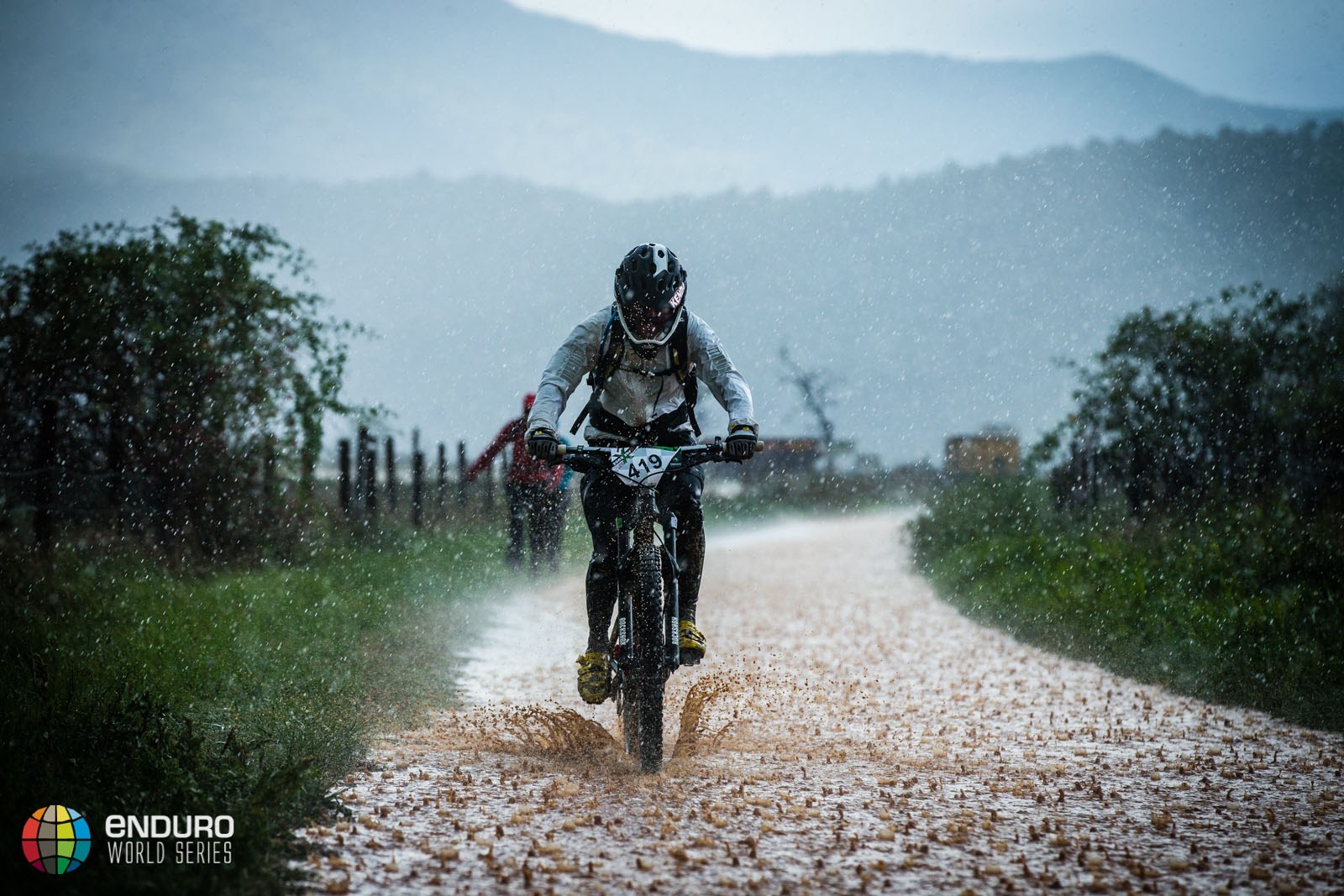 Flash floods forced the cancellation of the 8th and final stage.

In the Under 21 men’s category it was Amaury Pierron who won by an incredible 40 seconds, with Adrien Dailly (Lapierre Gravity Republic) and Elliot Trabac (Scott SR Suntour Enduro Team). In the U21 Women Axelle Murigneux won convincingly over Martha Gill (Marin Bikes/Stan’s No Tubes). In the Master’s category Carles Barcon won, with Primoz Strancar in second and Eduardo Garcia Cuesto in third. 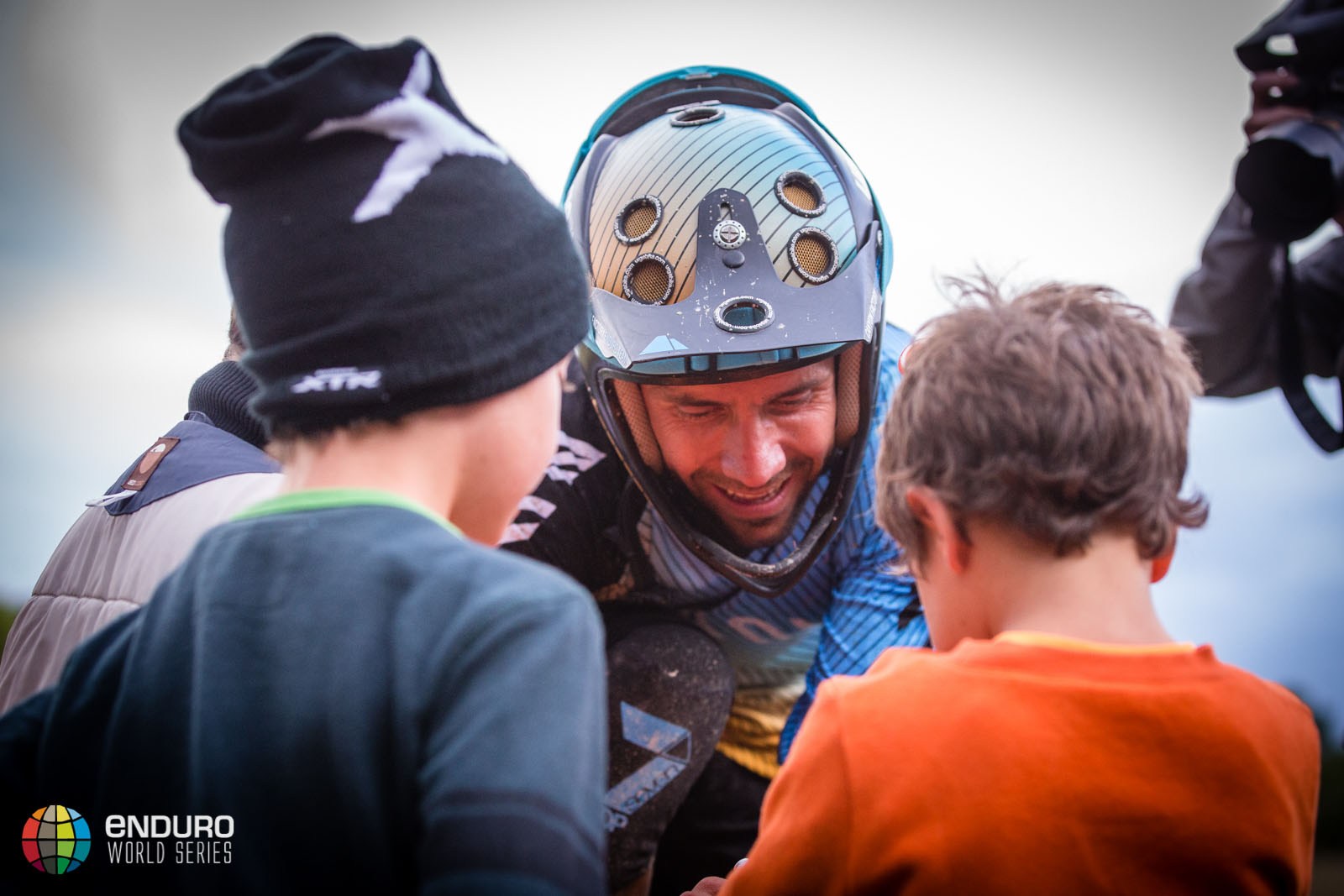 Fabien Barel signing autographs on his farewell tour. He has declared that Finale will be his last race as a professional.

In the team competition Canyon Factory lead the series.
Next weekend sees the series head to Italy for the last race of the year, where 550 riders will take to the famous trails of Finale before the 2015 Enduro World Champions are crowned on the beach. 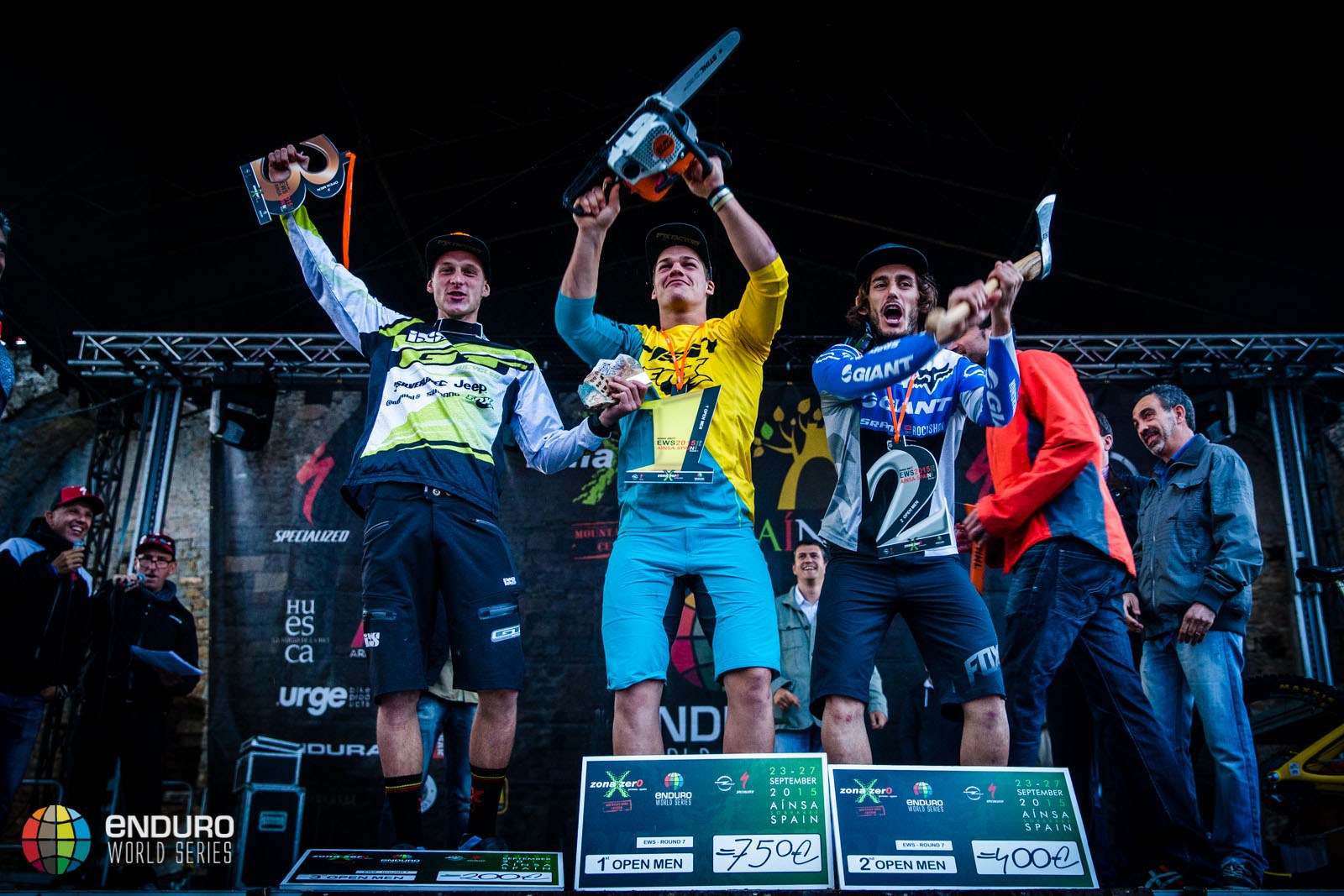 Richie Rude won a (running) chainsaw, Yoann Barelli got an axe for second and Martin Maes won… a cardboard number 3?

Men’s Results heading into the final round.

Here’s some POV footage of Jerome Clementz on stage 3.

Barring disaster, Richie and Tracy are in good shape to take the overall.