While much of Whistler was busy getting ready to host its first ever Ironman Triathlon this past weekend, a smaller group of superheroes were putting the final touches on WORCA’s third annual women’s event, the Battle for Bond. The event series kicked off in 2011 with the Betty vs. Veronica race, and then last year’s Charlie’s Angels event – both involving a DH race followed by an XC race. The theme for this year’s event was Bond: James Bond, and consisted of a one-day enduro race format, requiring participants to complete 5 timed single-track segments throughout Whistler’s Westside. 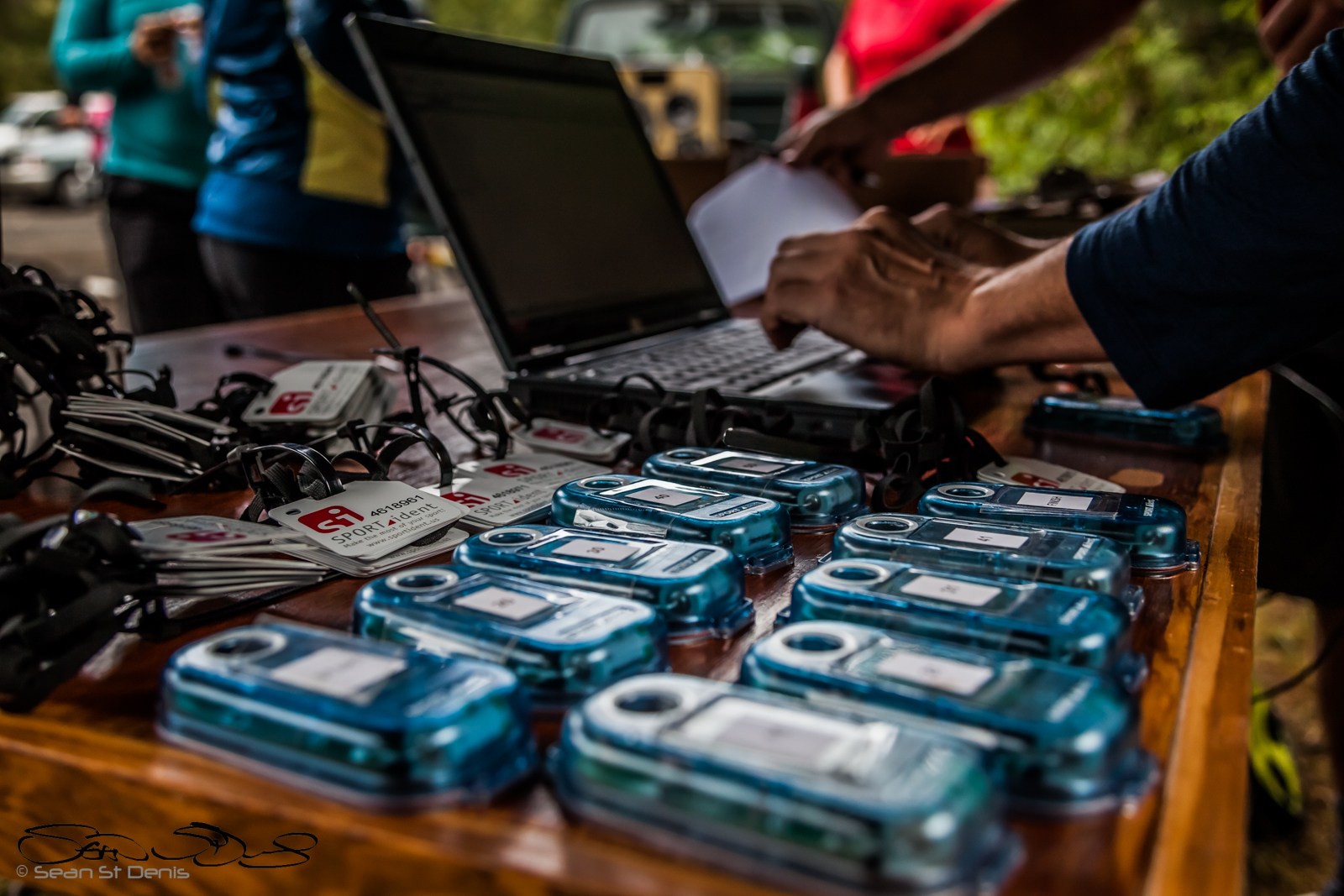 Race day sign in began at 10am in the House Rock parking lot, near the Cheakamus Crossing neighbourhood – it was easily found by following the mass of girls on bikes and the James Bond theme music.

You can travel around to many different biking meccas and easily find people who are passionate about bikes, but it’s rare to find as many women involved and excited about biking as you will in Whistler. For the third year in a row, this event quickly filled up with nearly 200 women registered. As a first timer to the event, it was quickly evident why this series is so popular: it was more than just a bike race for women – it was an extremely well put together event that incorporated fun into every aspect. 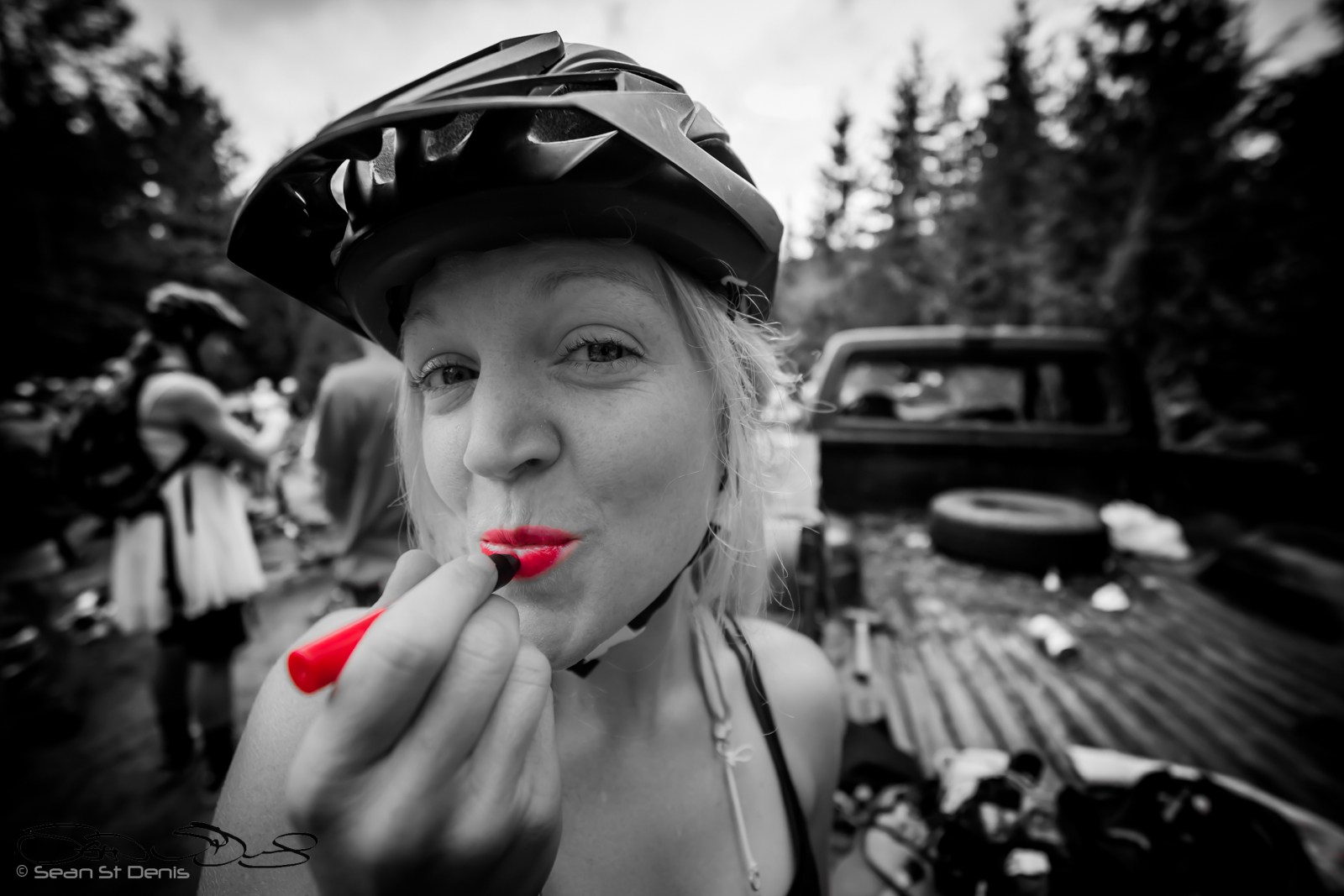 An essential piece to any serious racer’s ensemble: fire engine red lipstick! Leah Trudeau completes her look before the race.

As the check-in area began to fill up, the scene began to look more and more like any bra-burning feminist’s worst nightmare: every female stereotype was out in full force! Race kits ranged from your typical bike shorts and jersey to gold sparkly dresses and Austin Powers Fembot outfits. Girls were checking their tire pressure and their hairdos, applying chain lube and lipstick, and making sure they had the right balance between showing their assets and reinforcing their outfits to withstand a full day of riding. It was every male biker’s dream. 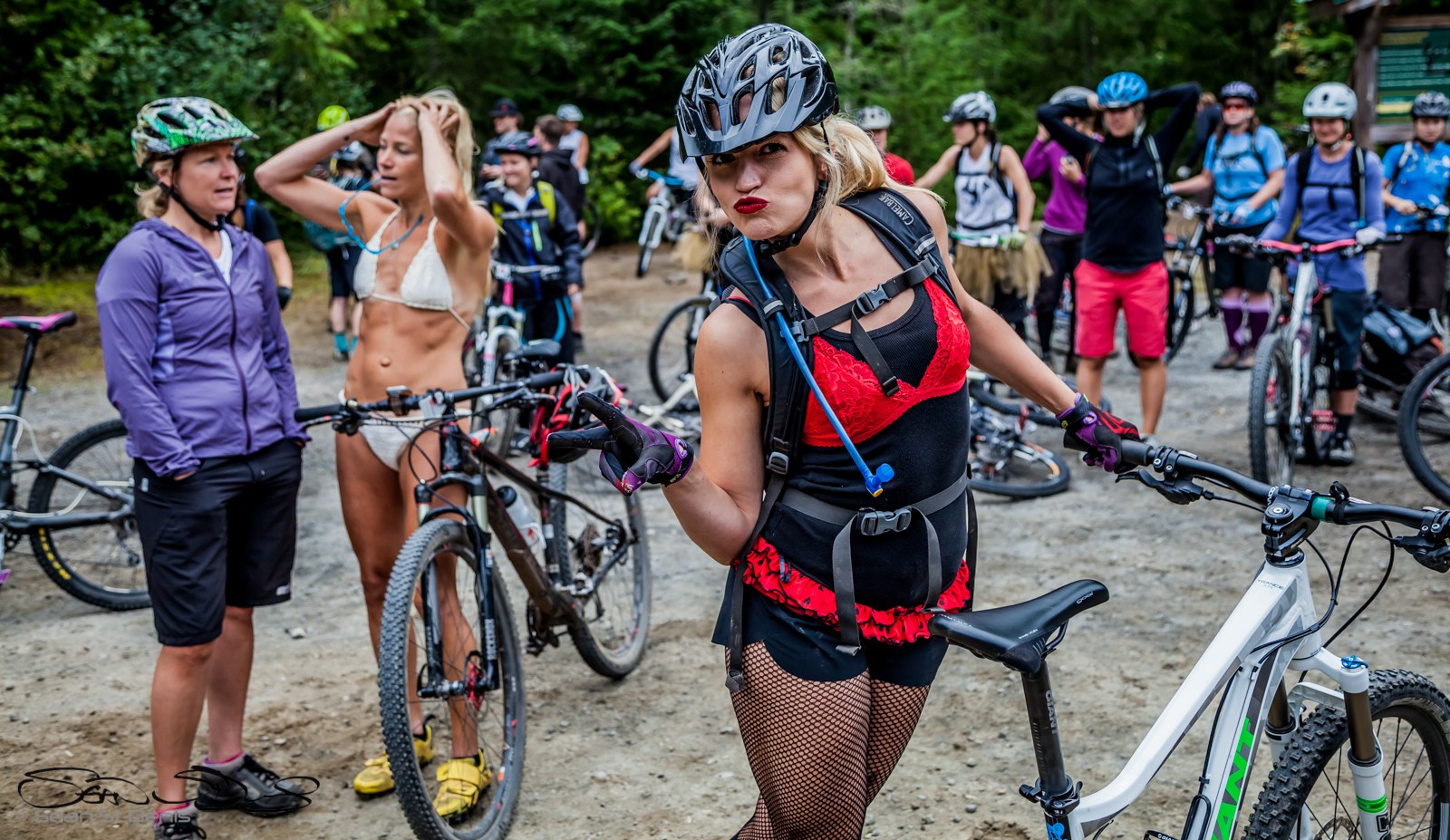 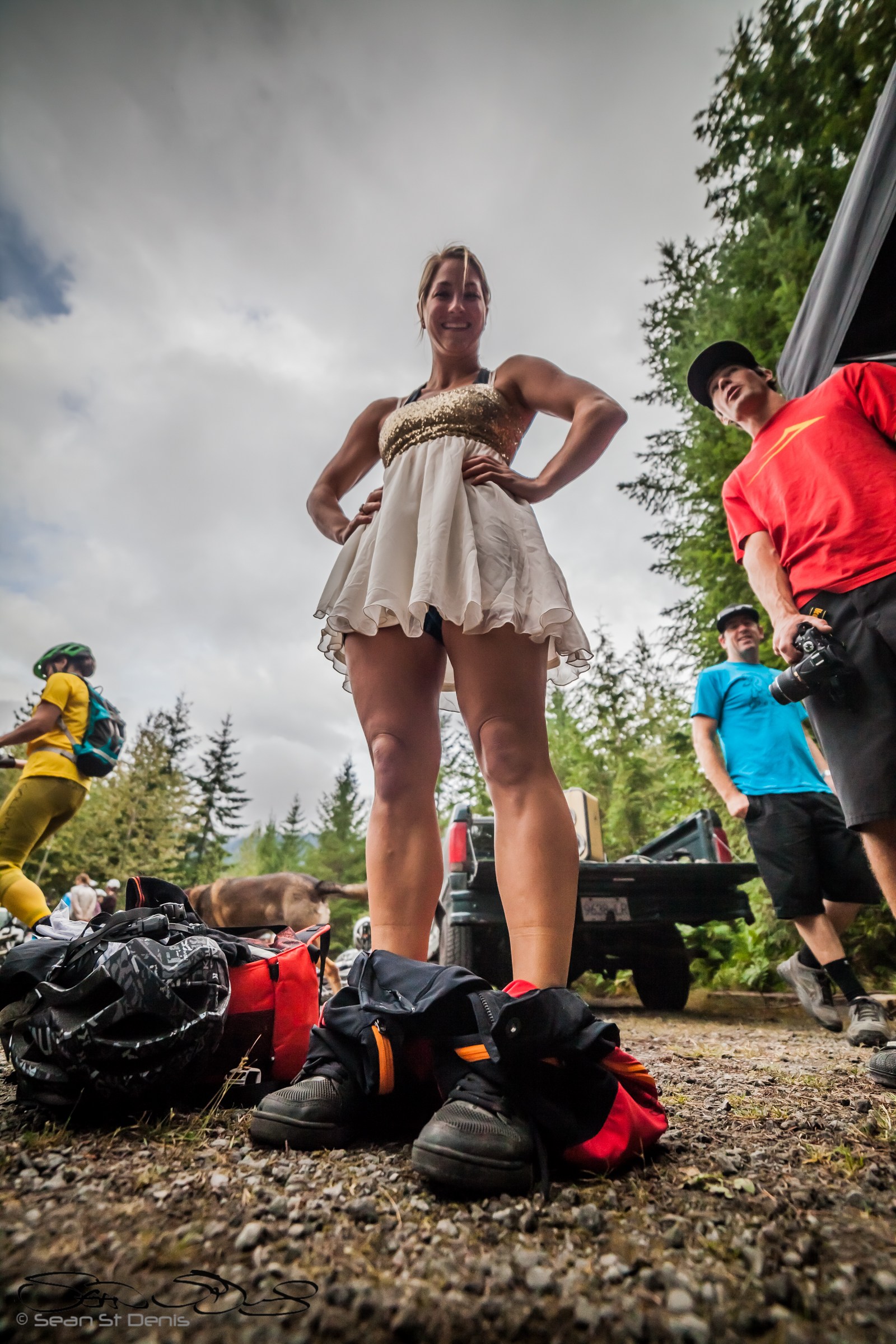 … to Leanne Tompkins’s gold sparkly dress. Why wouldn’t you want to participate in an event you can wear a dress biking in and get high-fived for it? 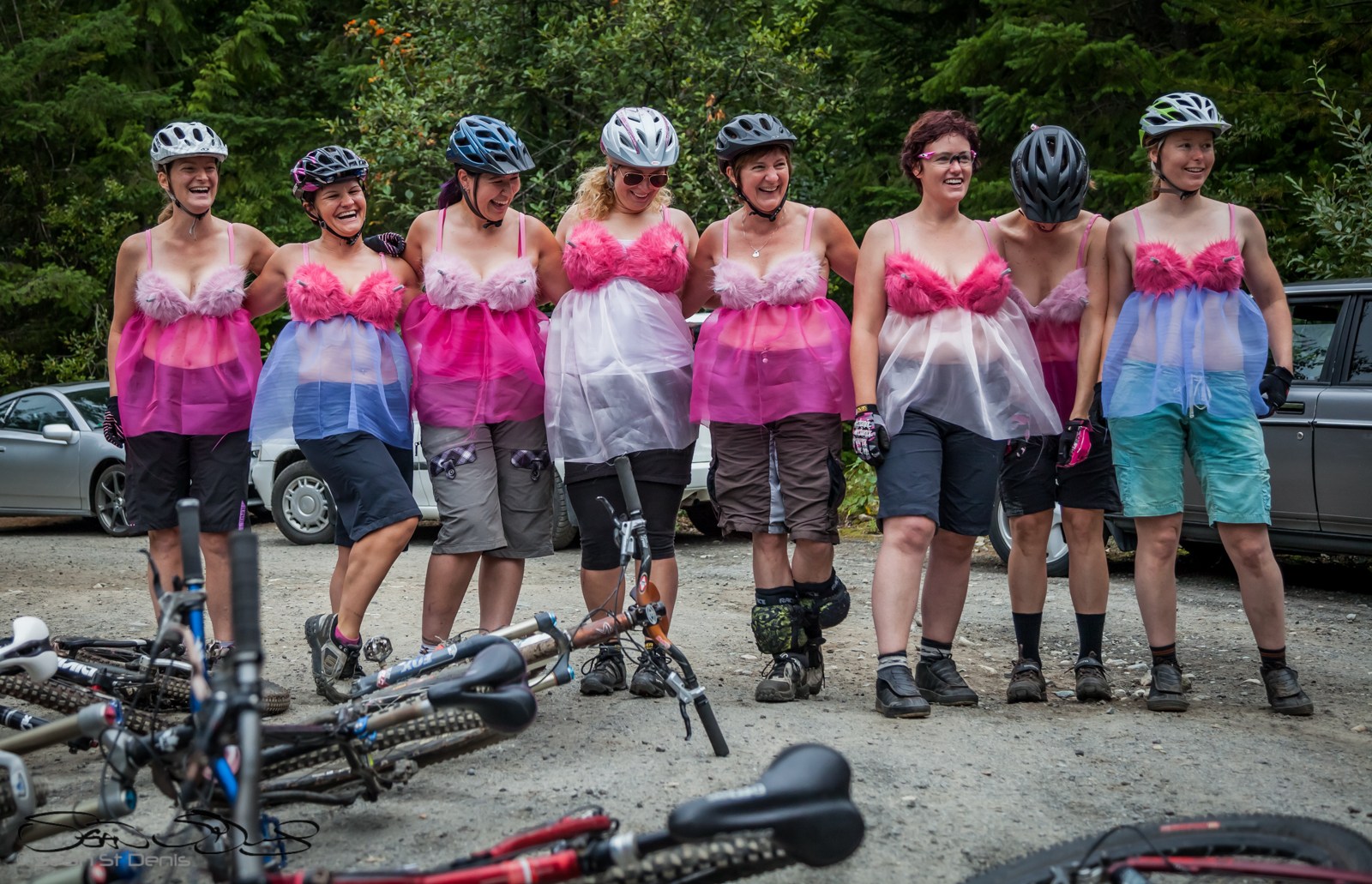 Dorothy and Alison came up with the brilliant idea of being Fembots rather than Bond girls, and thanks to Dorothy’s handiwork, these ladies were a huge hit with the spectators.

In many people’s opinion, the Battle for Bond was a hit before it had even begun because it wasn’t just about the race, but the event itself. People signed up to race or volunteer just because they knew that with WORCA, Tony Horn (who ran the first two events) and Clark Lewis (who organized this year’s Battle for Bond event) involved, the “race” would be memorable, regardless of the results. 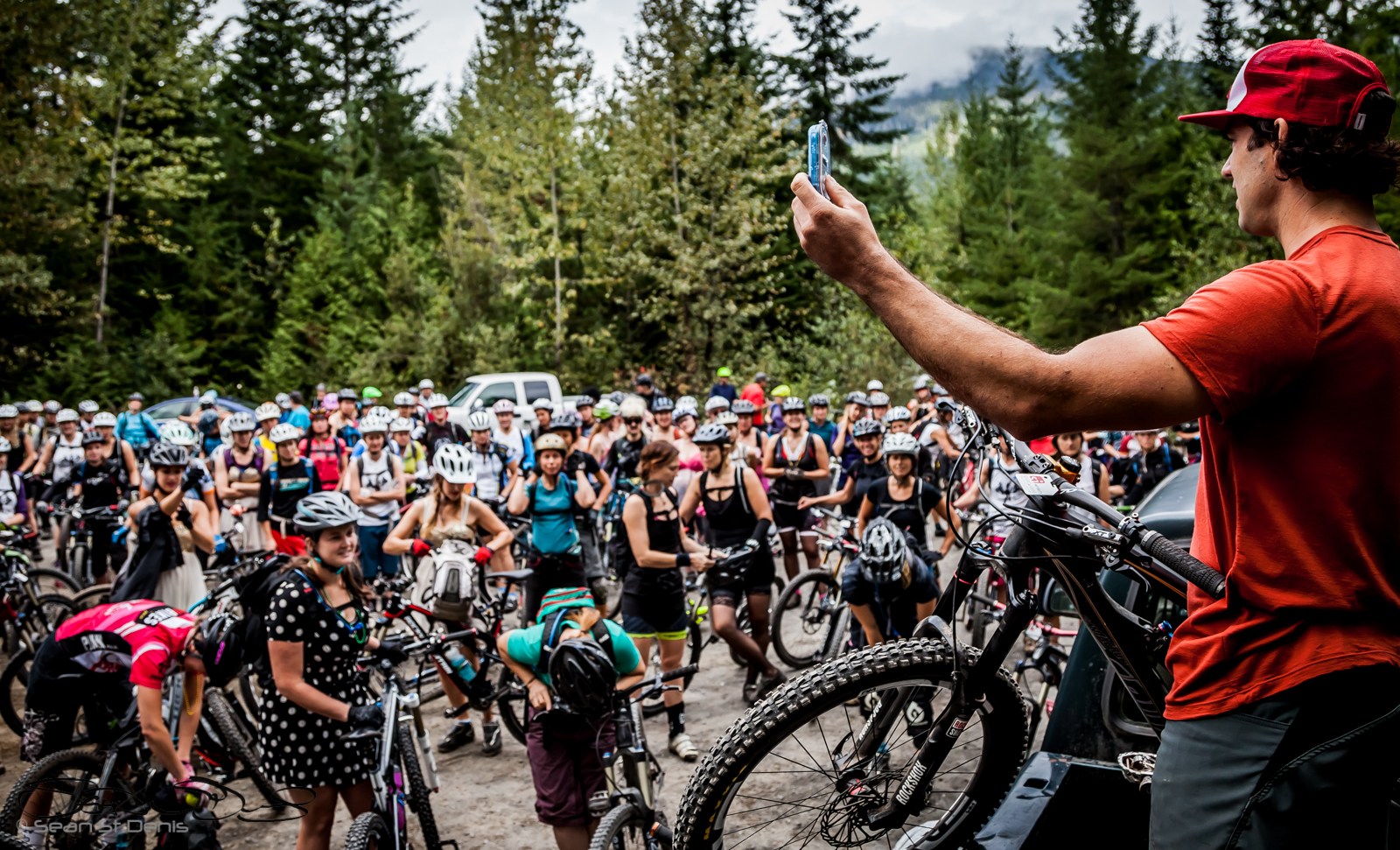 Once all the volunteers were organized and the ladies were checked in, event coordinator 007, err Clark Lewis, gave the girls a few final race instructions and course details before the mass start climb to the beginning of stage 1.

There were a few random cyclists out for a pedal that got a big surprise when a wall of scantily clad women came charging up the first hill.

As to be expected with a mass start, there was a bit of a wait to begin the first stage of the racecourse. Rather than being annoyed at having to wait so long, many of the girls amused themselves by checking out each other’s outfits and making new friends with each other. 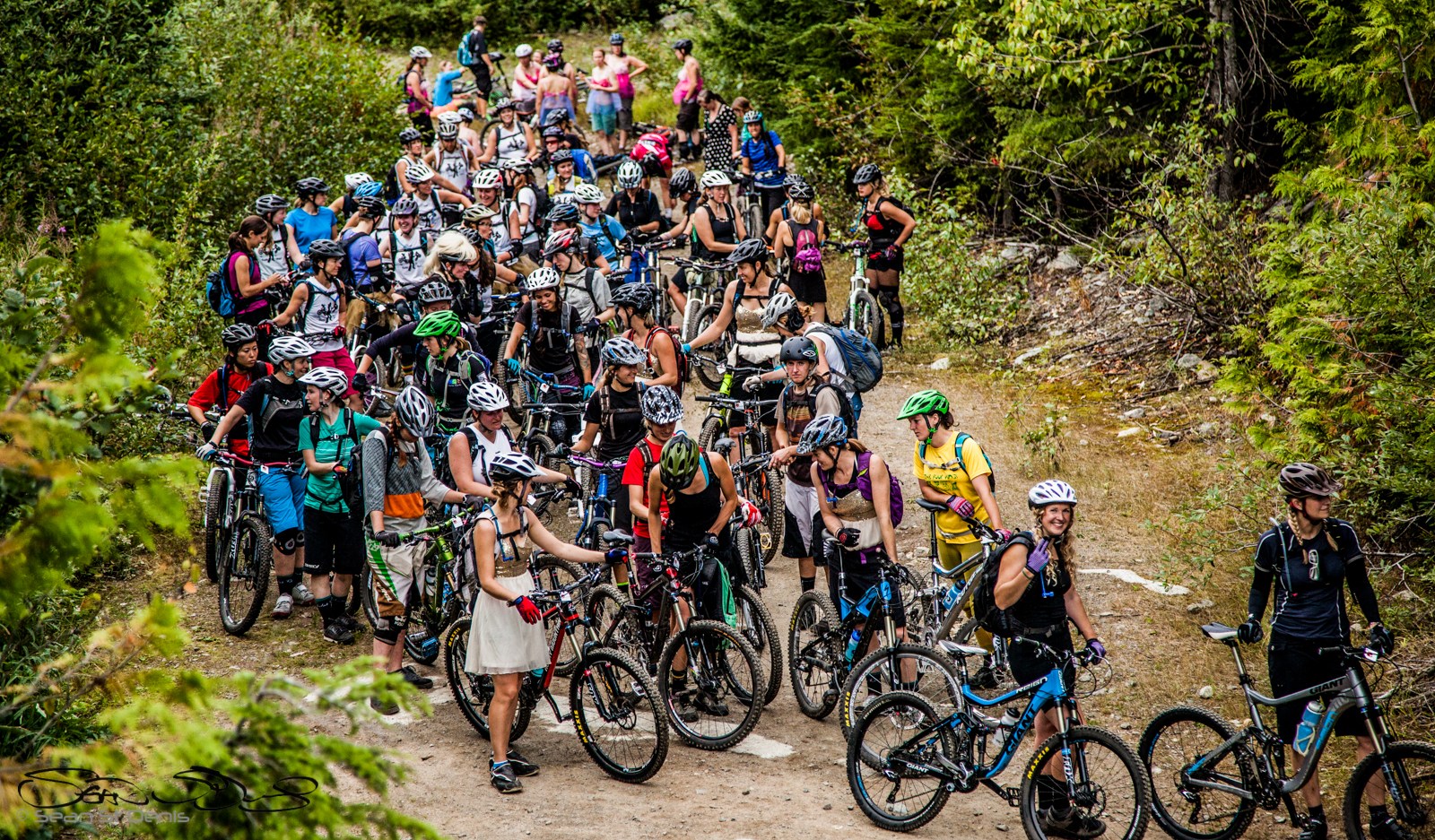 The event’s focus on having fun and riding bikes made it easy to not grow nervous or anxious before dropping in, leaving time to take selfies and double check that your dress wouldn’t get caught up in your tire when doing the rock roll on Tunnel Vision.

One of the most glorious aspects to this year’s event was the half-naked 007’s scattered throughout the course. Understandably they did get a bit distracting when you had to start the race and you were staring at their pecs rather than where you needed to ride, but I don’t think many of the girls minded. 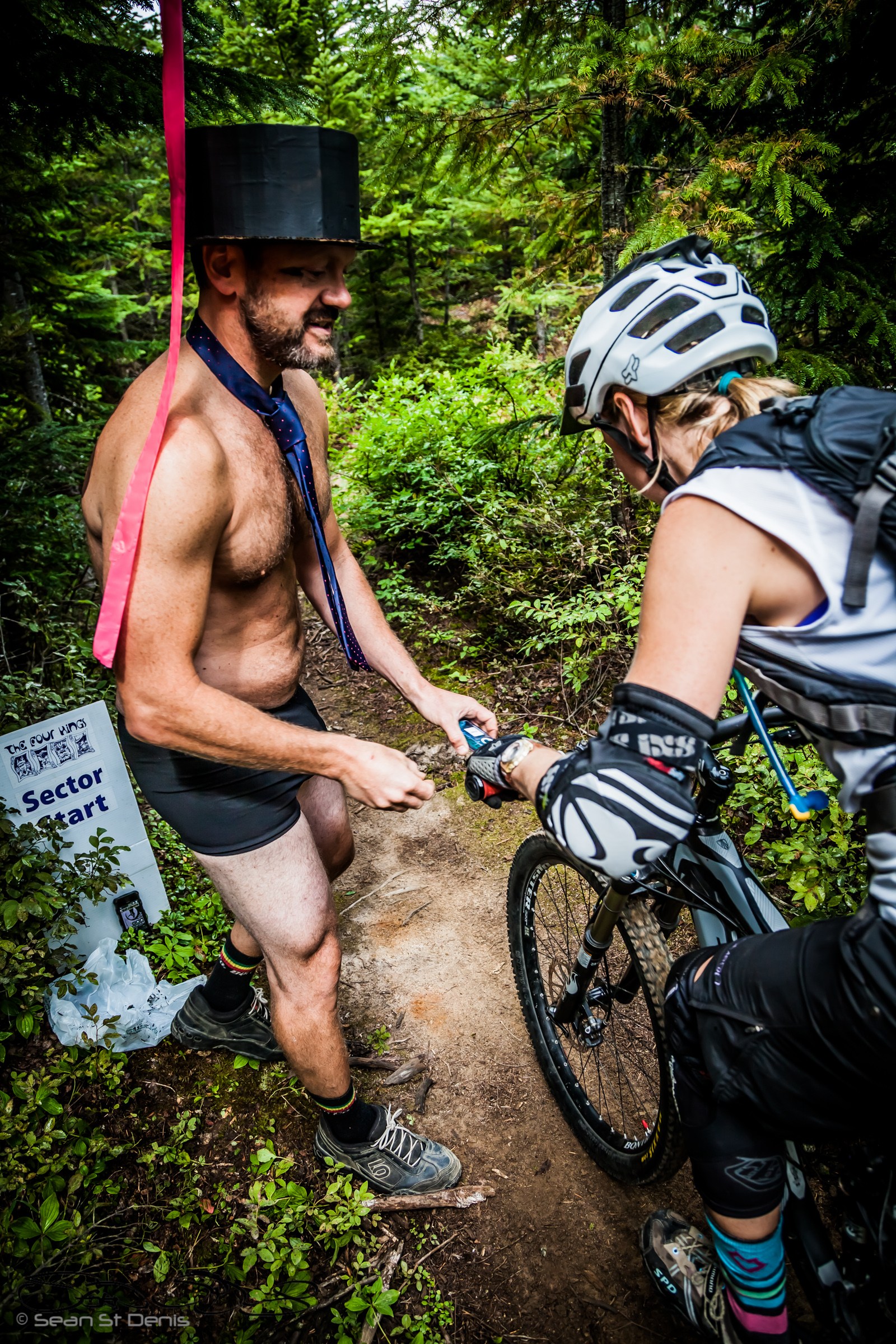 007 Ian bears (almost) all as he scans the timing cards before dropping in to the first stage of the day. 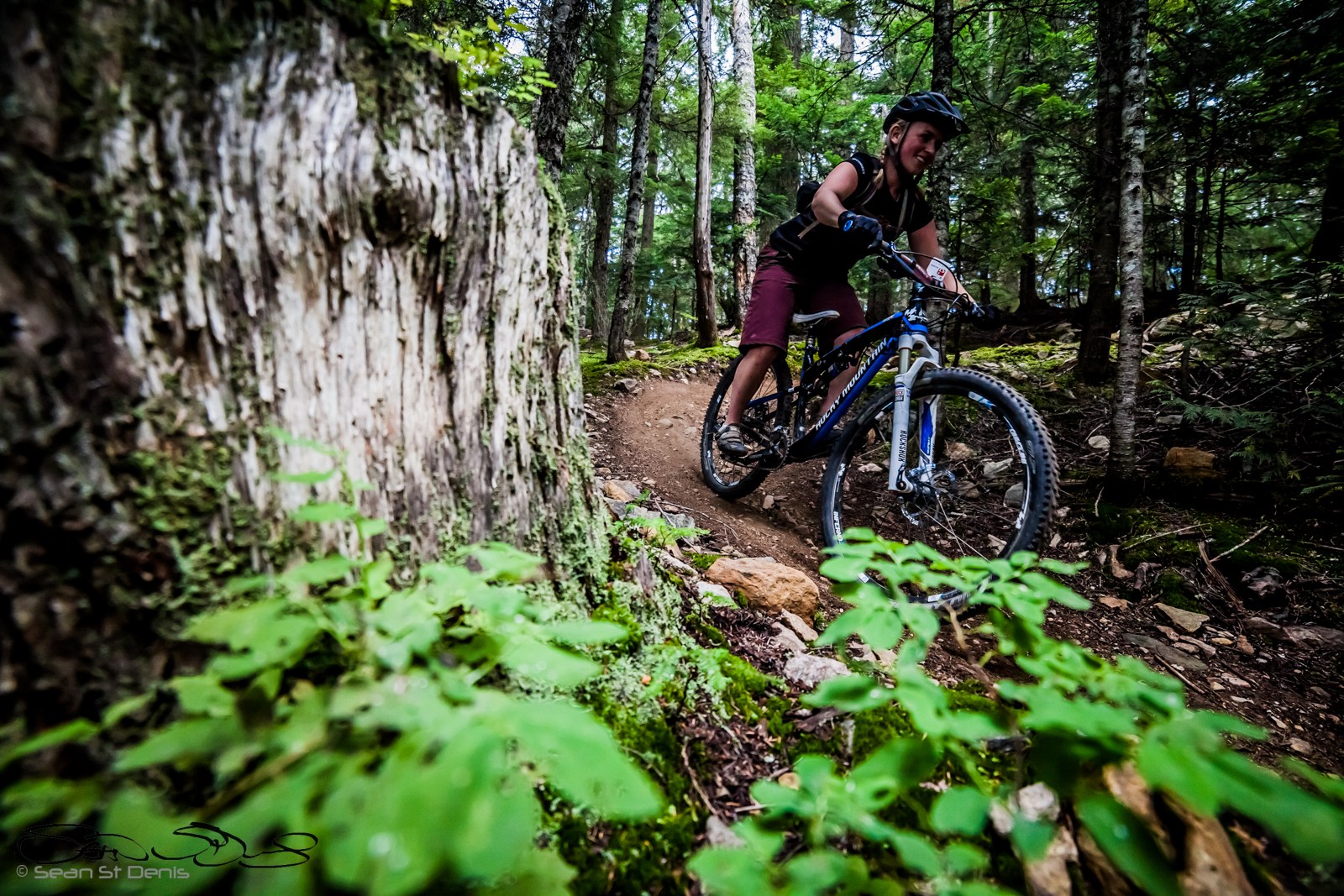 Stage 1 took the riders down upper and lower Tunnel Vision, just as the weather began to clear up.

After climbing the Kadenwood Road hill, stage 2 began at the top of Big Timber. The girls rode all of Big Timber and then popped out onto the ski hill to do a few flat-cornered switchbacks down the remainder of the run, where they got shot at by a fairly naked 007 as they sprinted to the finish. 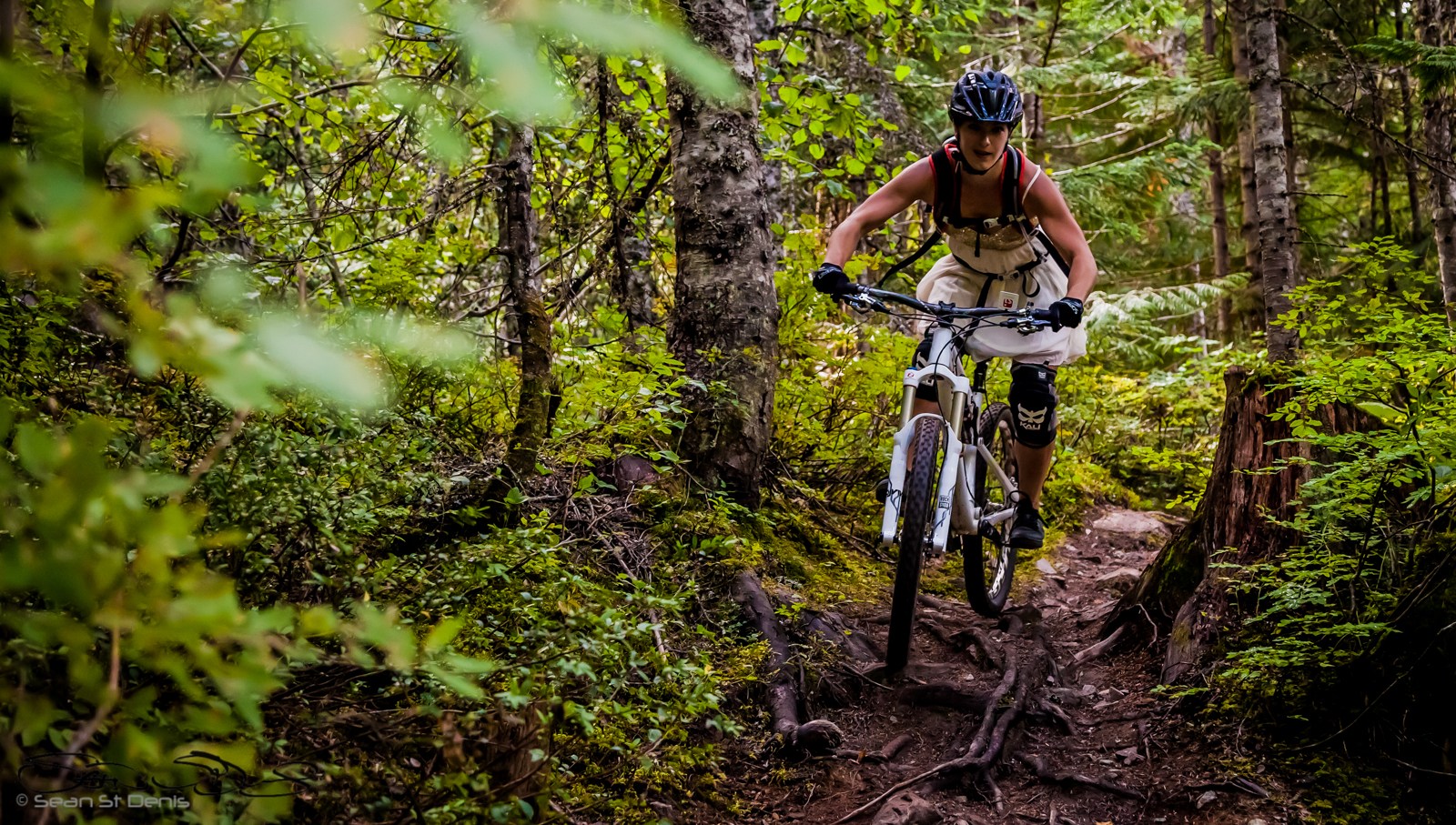 Leanne Tompkins, more often found in the bike park, rode the trails for the first time during the race wearing a surprisingly comfortable flowy dress. 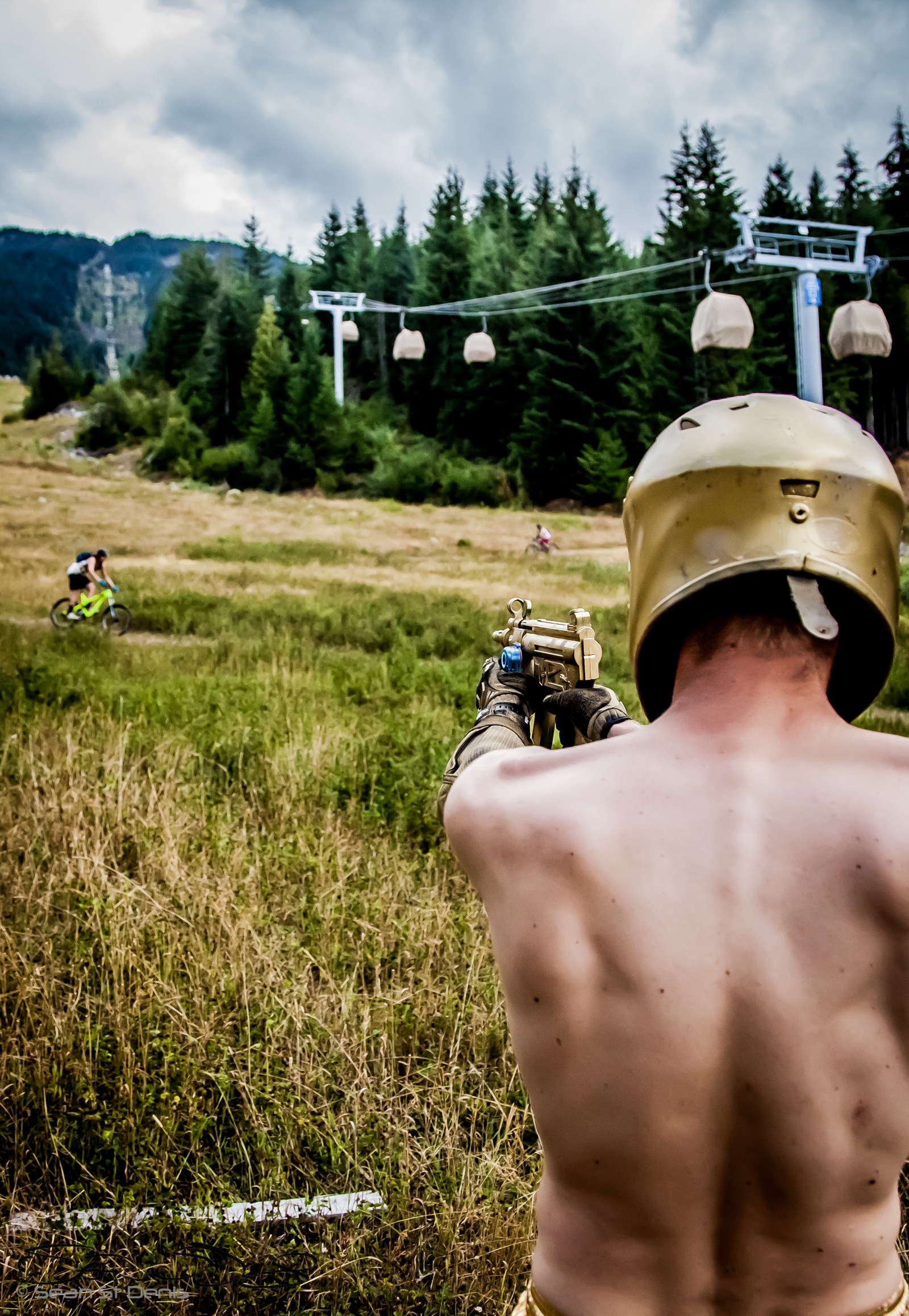 Goldmember awaited the ladies to stop their time at the end of stage 2.

The second transition involved a good size climb from the bottom of the Creekside gondola across to Sproat Mountain, up a few gravel roads and “cardiac hill”. Before riding up Lower Sproat backwards to the start of stage 3, an oasis in the desert appeared: margaritas and Lucia Gelato dished out by thong wearing men and body massages at Beaver Pass! Oh, and did I mention there were chocolates too? It’s like they read our minds. 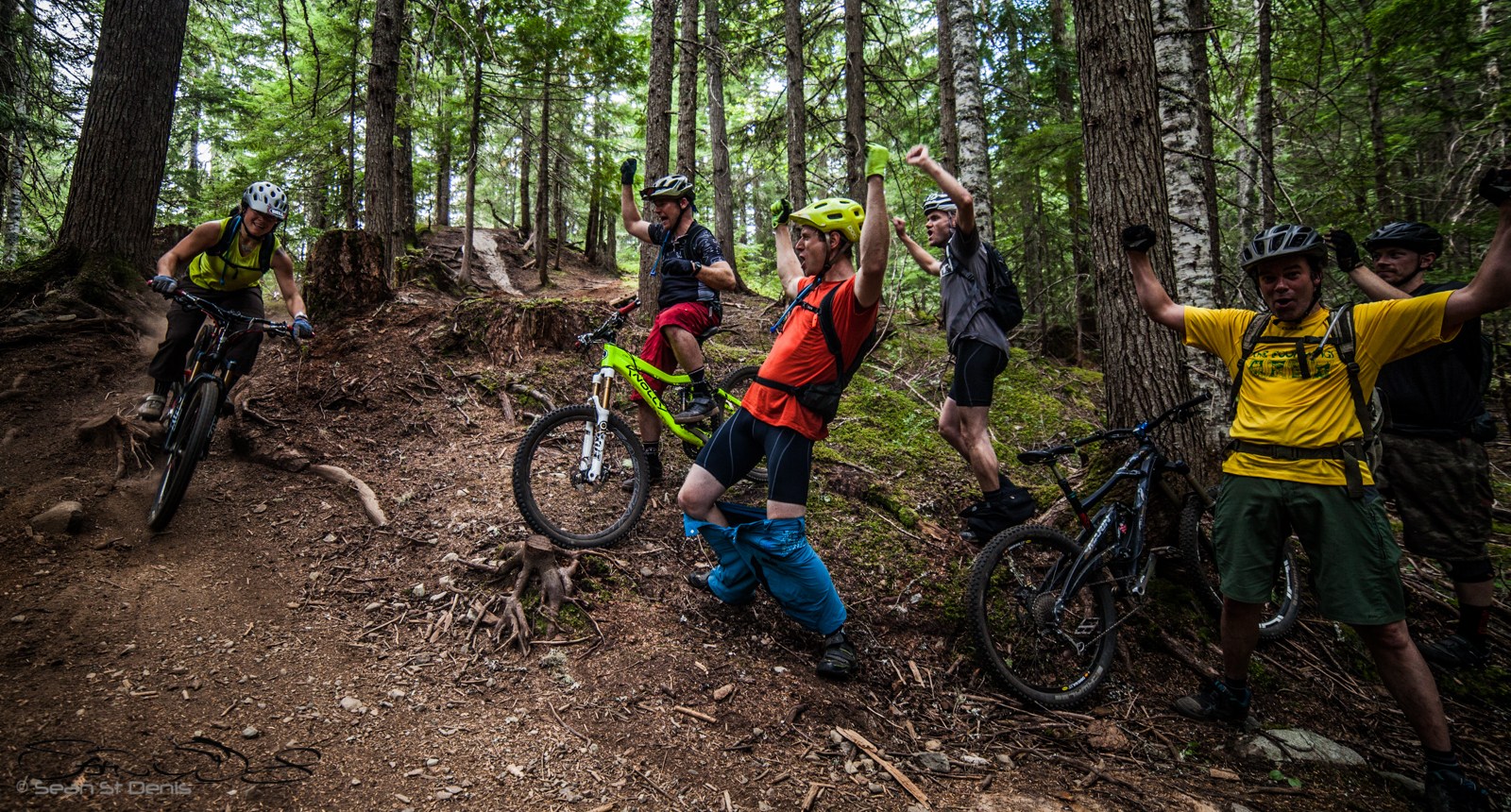 Stage 3 included Three Birds to middle Danimal. It’s a wonder there weren’t more crashes with all the distractions… err, supportive cheerers… along the way!

The climb up to stage 4 took the girls back up Stonebridge and Beaver Pass to the start of 99er, which worked out perfectly since that was where the oasis was, and the ladies got to help themselves to a second round of gelato and massages, just in case they didn’t get enough the first round. 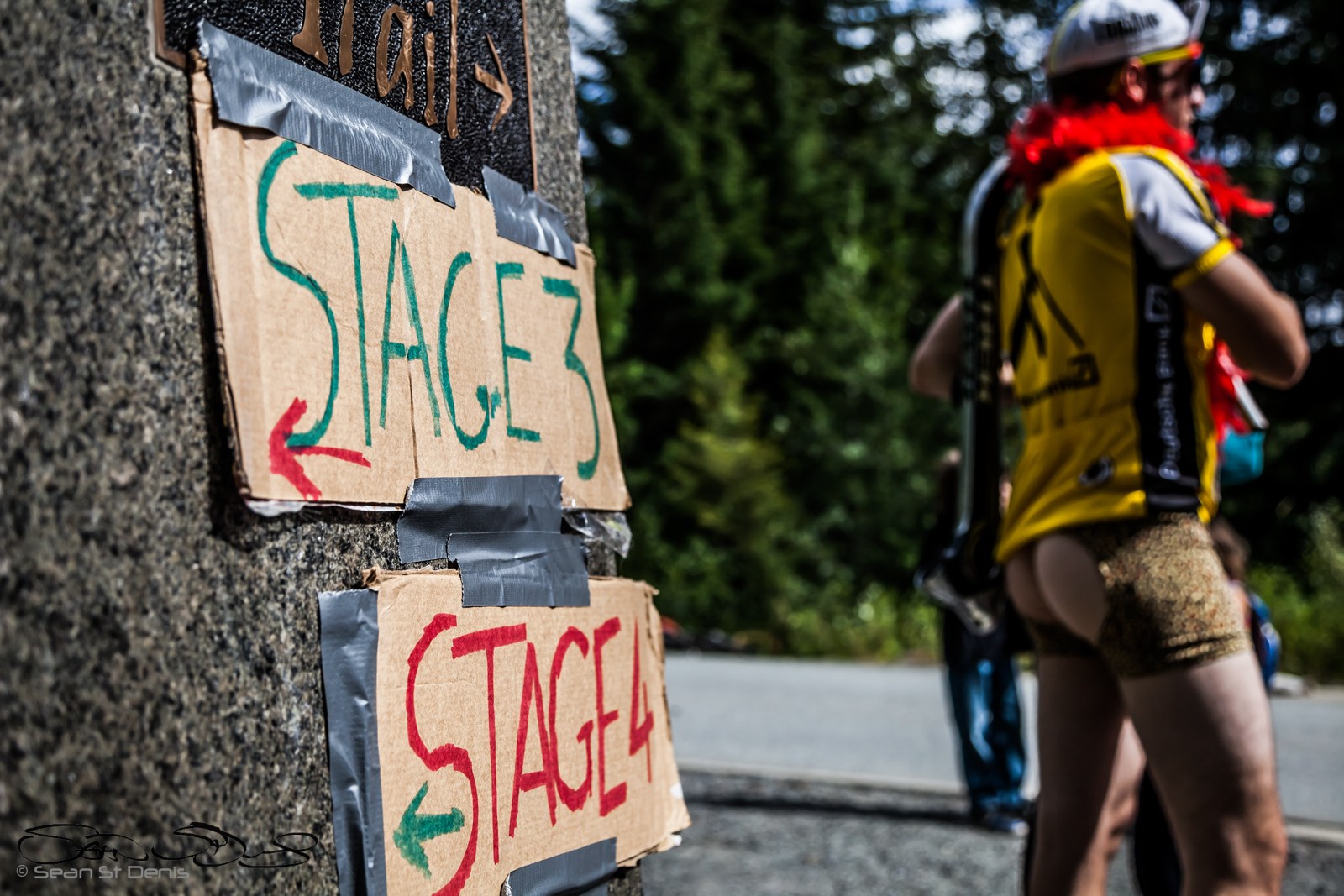 The course was well marked, but just in case you weren’t paying attention, men in ass-less chaps holding mugs full of Nibs were there to encourage and point you in the right direction. 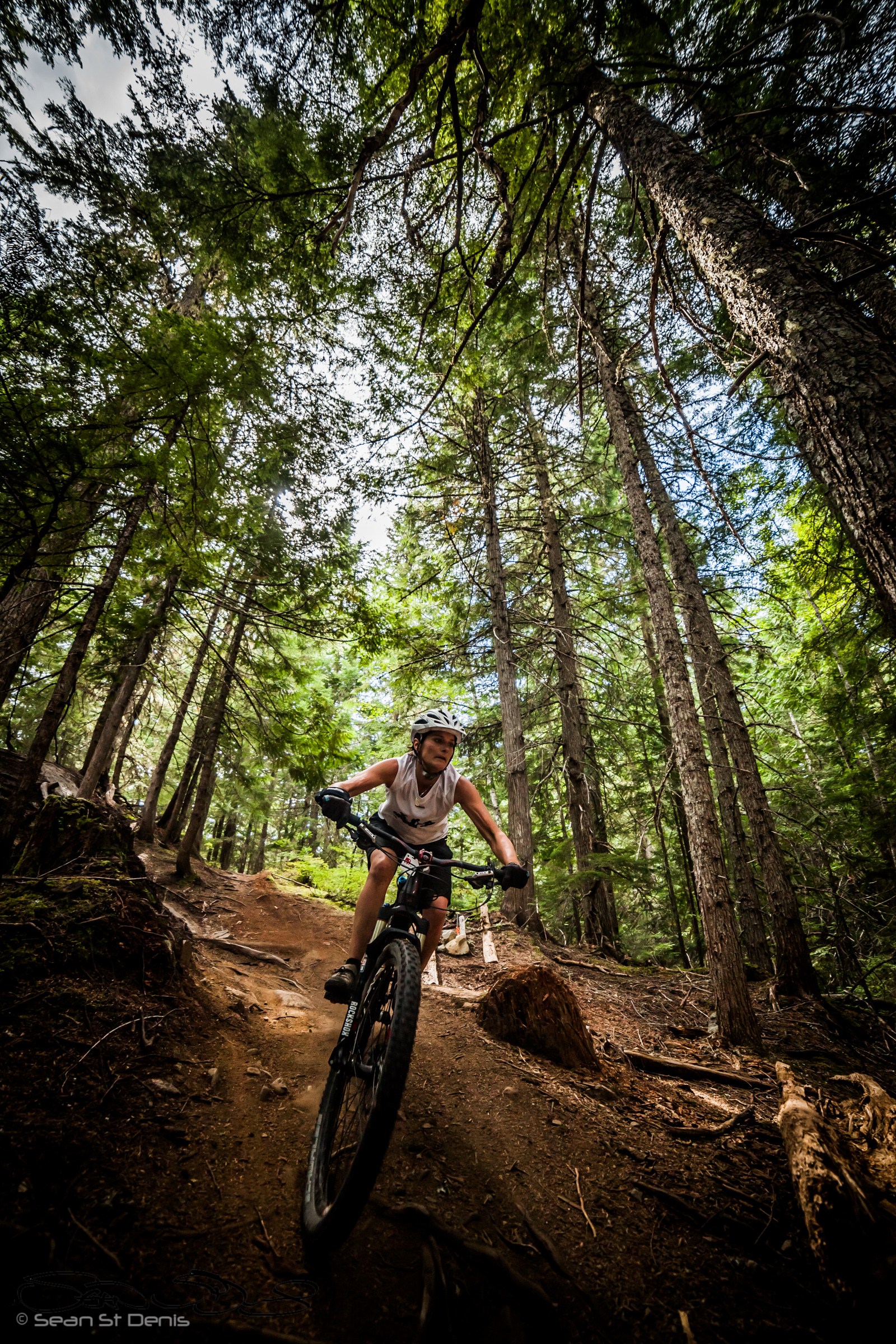 In addition to all the fun and games, the girls got to experience some of Whistler’s finest single track.

If you could read the minds of all the girls who ride bikes and find out what their ideal version of a bike race would be, the Battle for Bond would sum it all up. Before dropping in to each stage, some of Whistler’s finest men would ask, “How are you feeling?” “How are your energy levels?” “How is your bike running?” “Have you lowered your seat post and changed into your middle gear?” 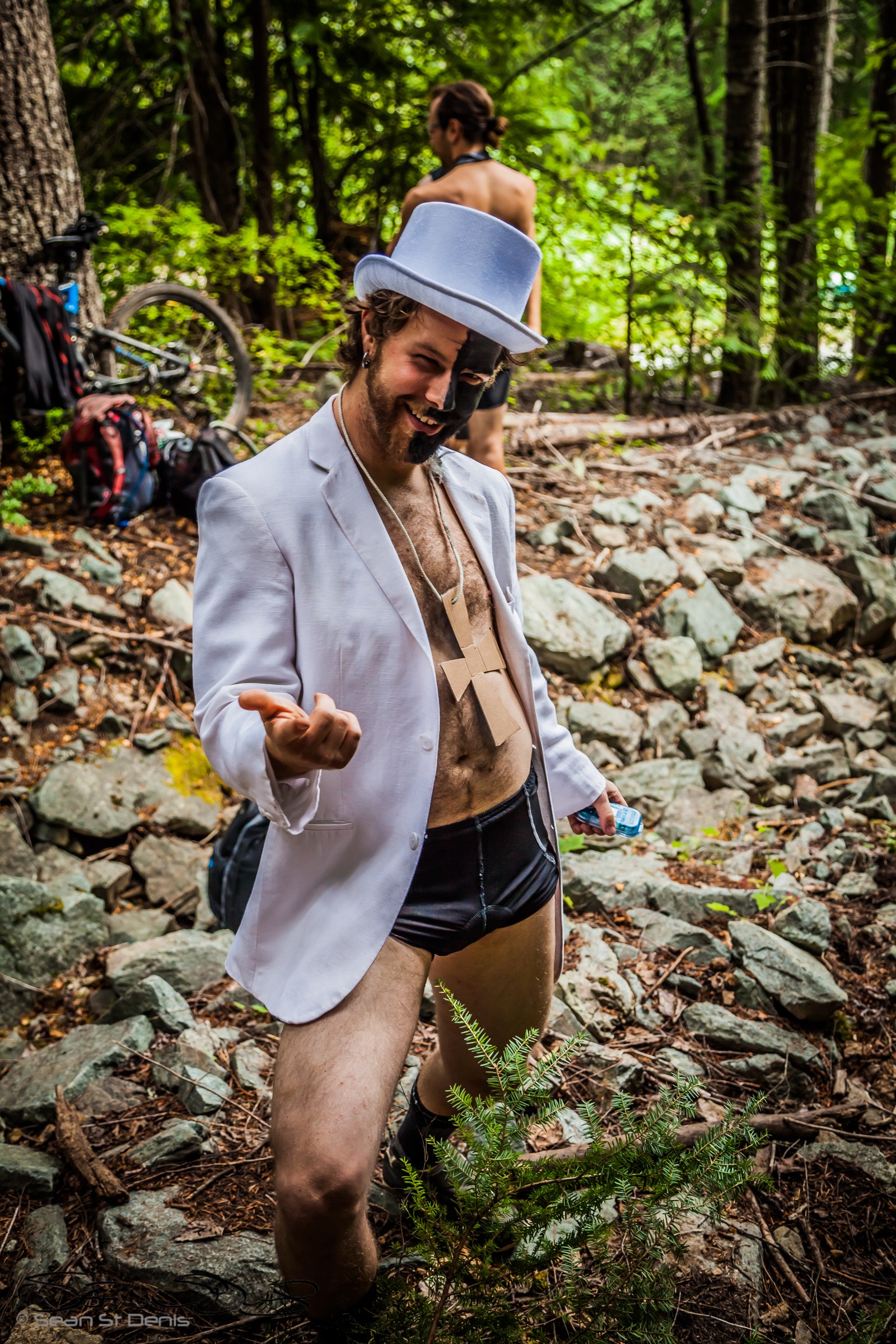 I bet you wished your bike mechanic would greet you at the end of a trail looking like this. Thomas Thacker: bike mechanic by day, 007 course marshal by… well, day as well. 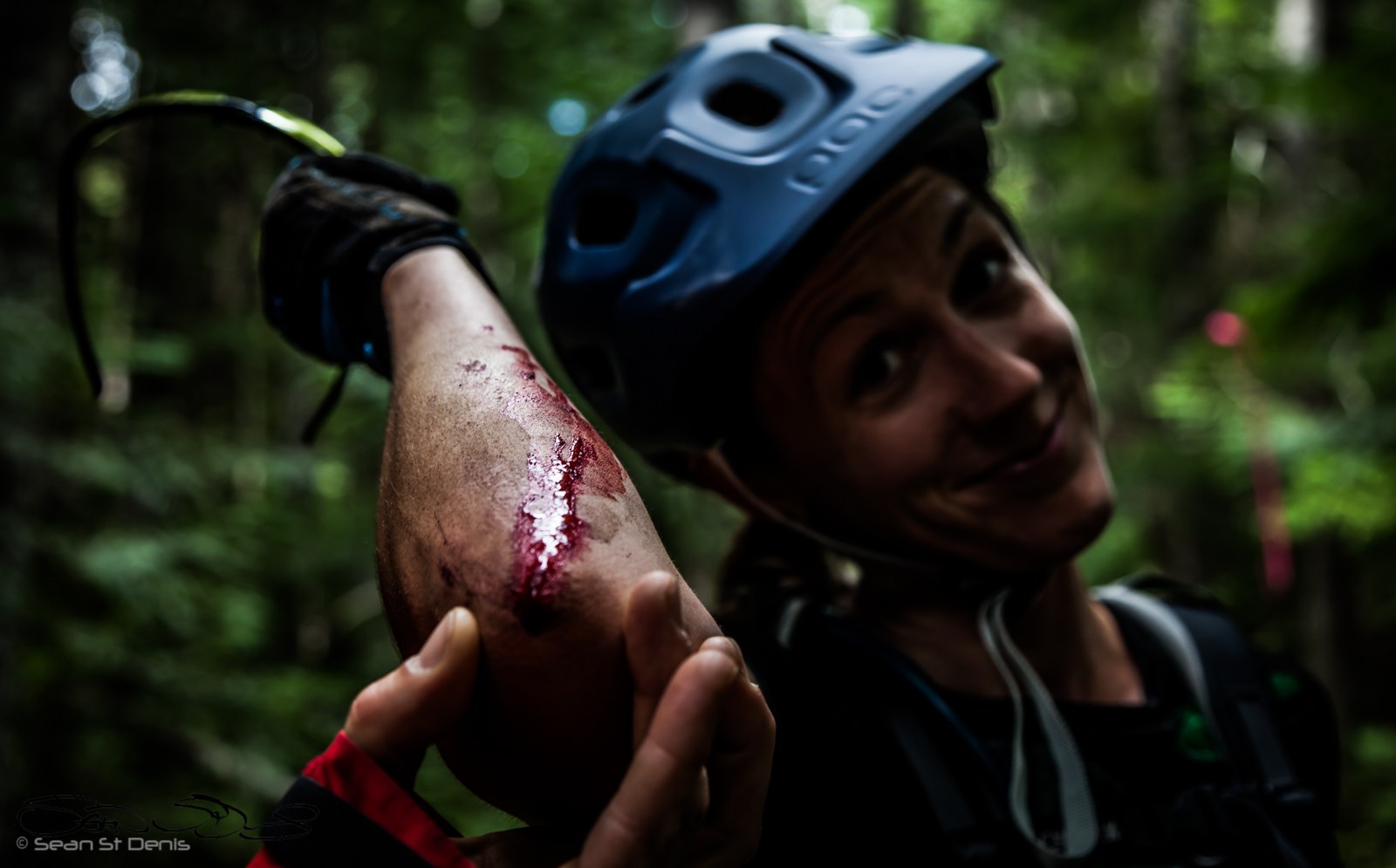 In addition to looking good and smelling nice, these girls were also pedaling machines! There were a few crashes throughout the day, but Whistler’s finest first aiders were there to save the day. 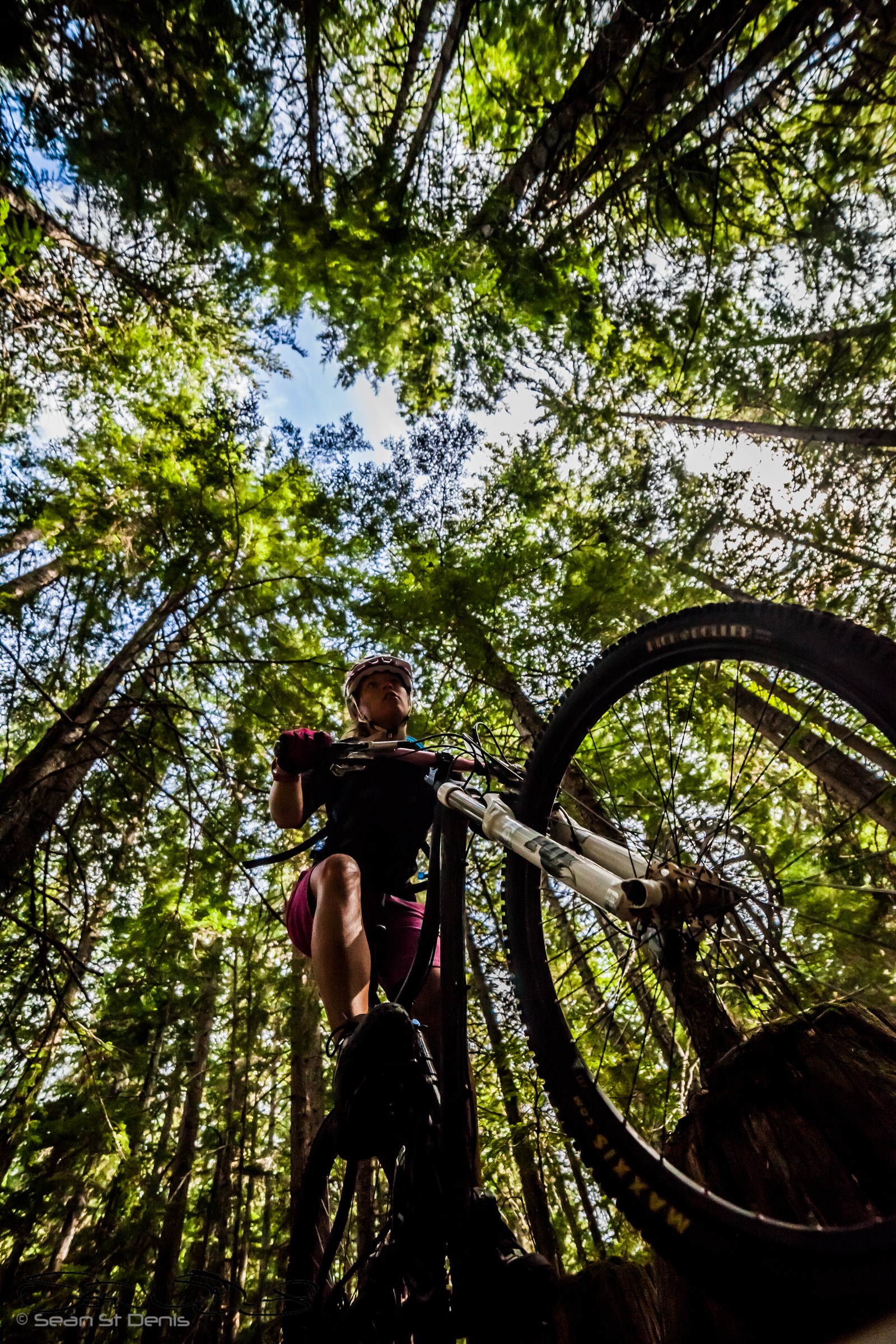 Stage 4 took the girls down 99er, which was in all-time condition after the past few days of rain. 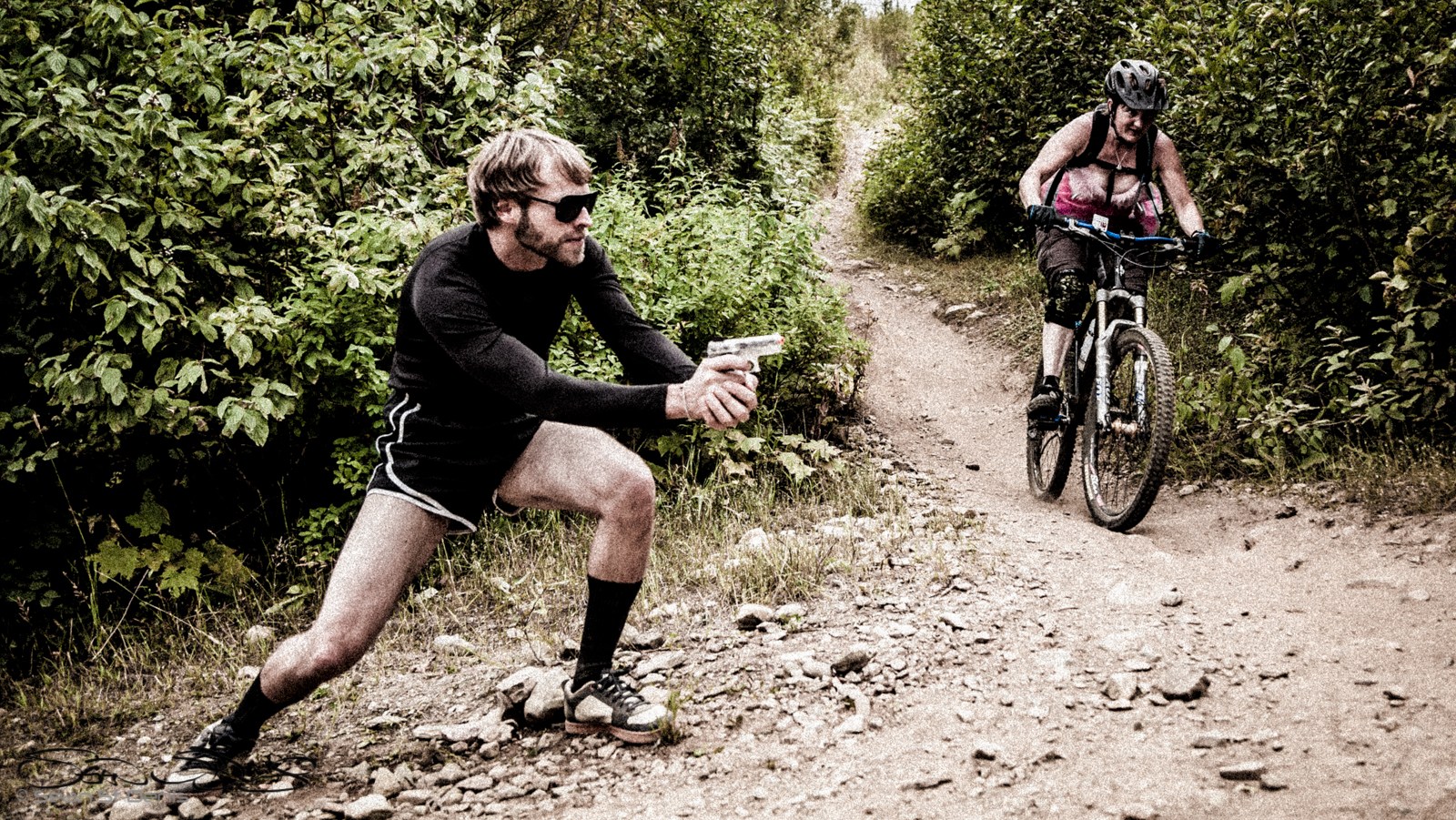 Austin Powers, aka Todd Hellinga, fought off Fembots all day, course marshaled, cheered on his girlfriend, and was an all around awesome guy to have at the event. 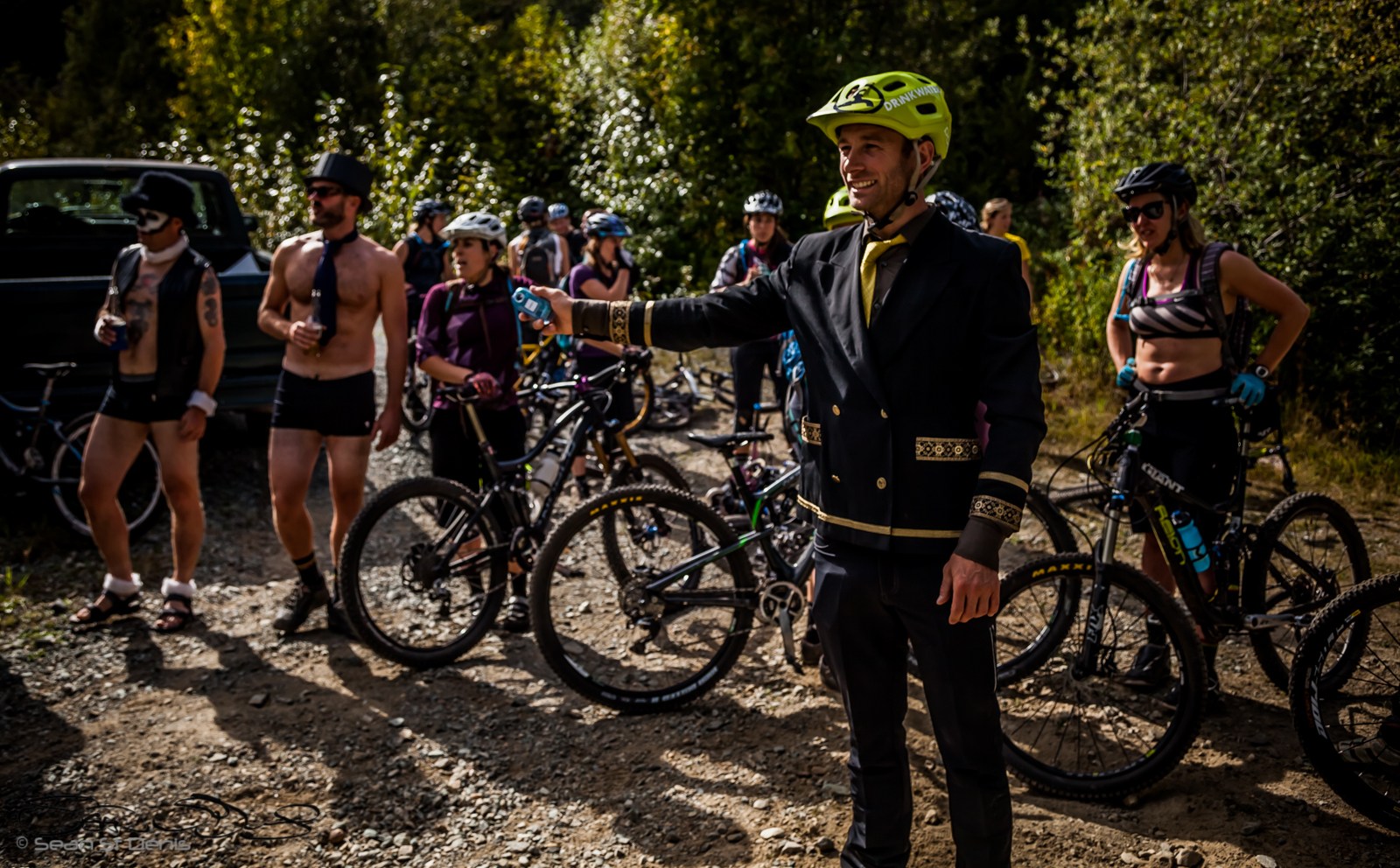 Seb Kemp was the handsome face every lady was looking forward to… because he meant you were finished racing! (And also because he played a very convincing Bond.) 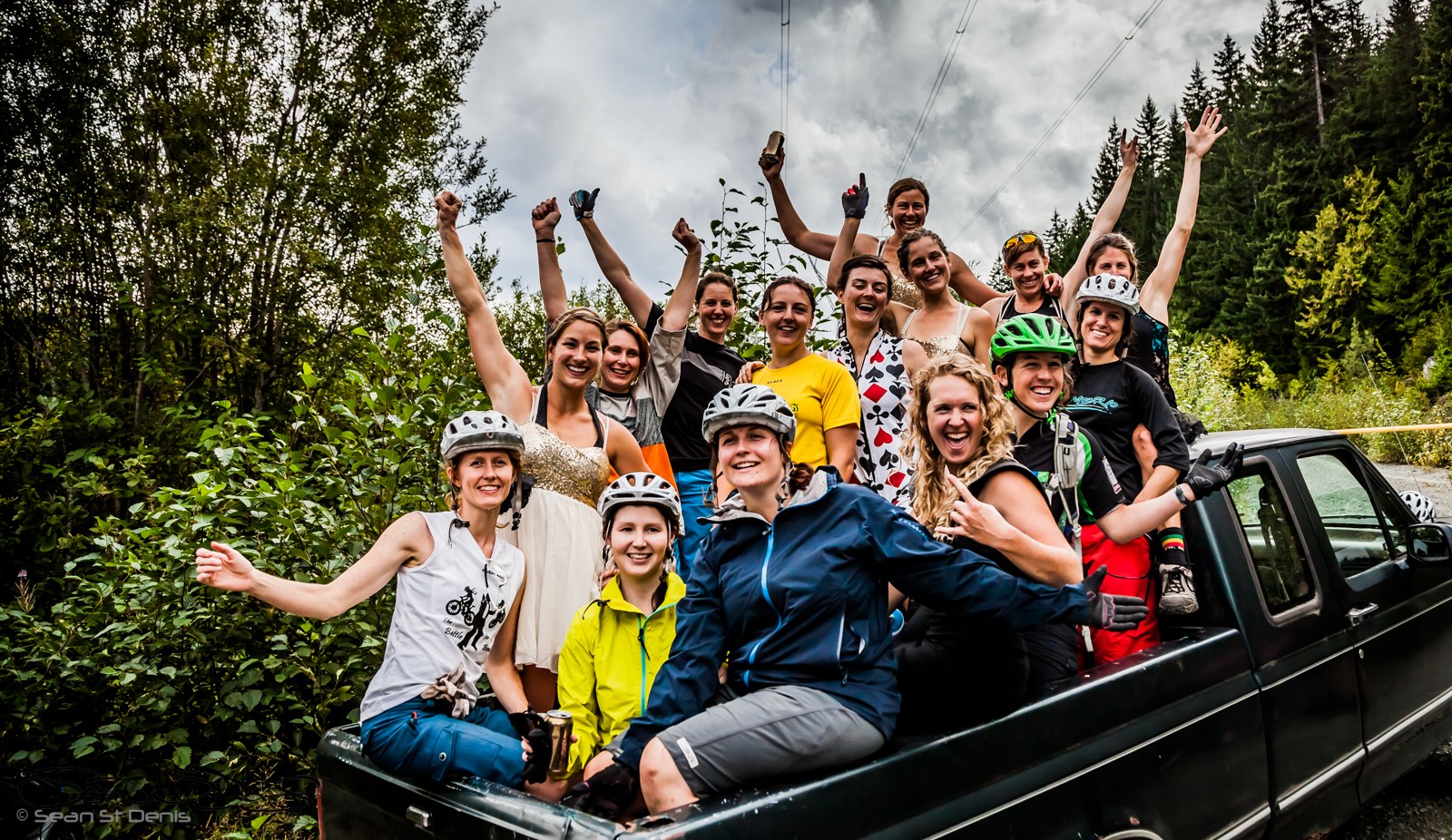 Guess how many cell phones were given to the photographer when someone yelled, “group photo!”?

The Battle for Bond wasn’t over once the last participant crossed the 5th stage finish line – a whole evening of enchantment was still ahead, hosted by the Fairmont who generously donated their ballroom for the after party. Continuing on with the Bond theme, there was funny money to gamble with, bars to get a martini (shaken, not stirred), and a dance floor. 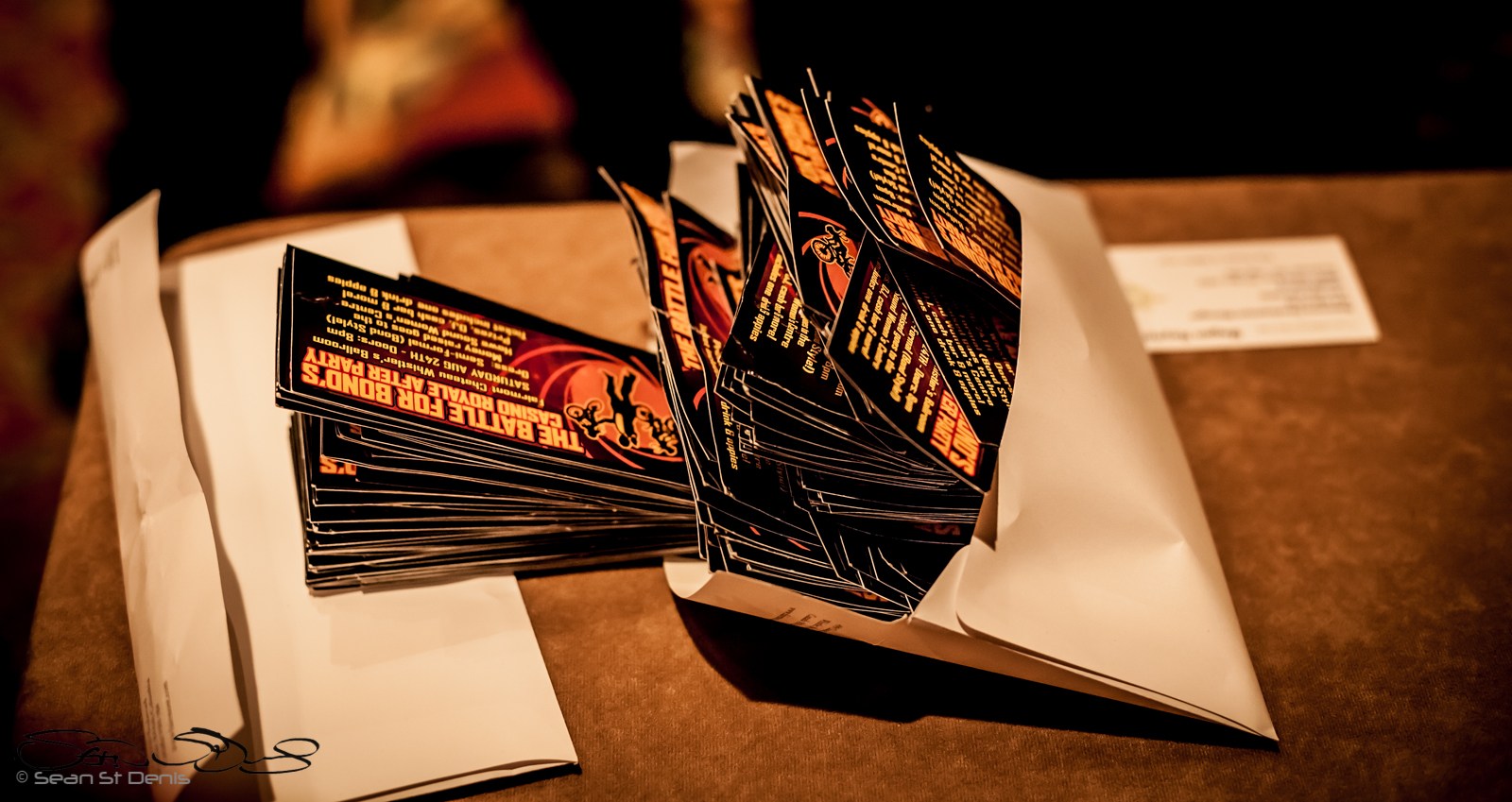 The Casino Royale after party tickets were a hot commodity, as they included a complimentary drink, appetizers and funny money to gamble with while the DJs kept everyone entertained. 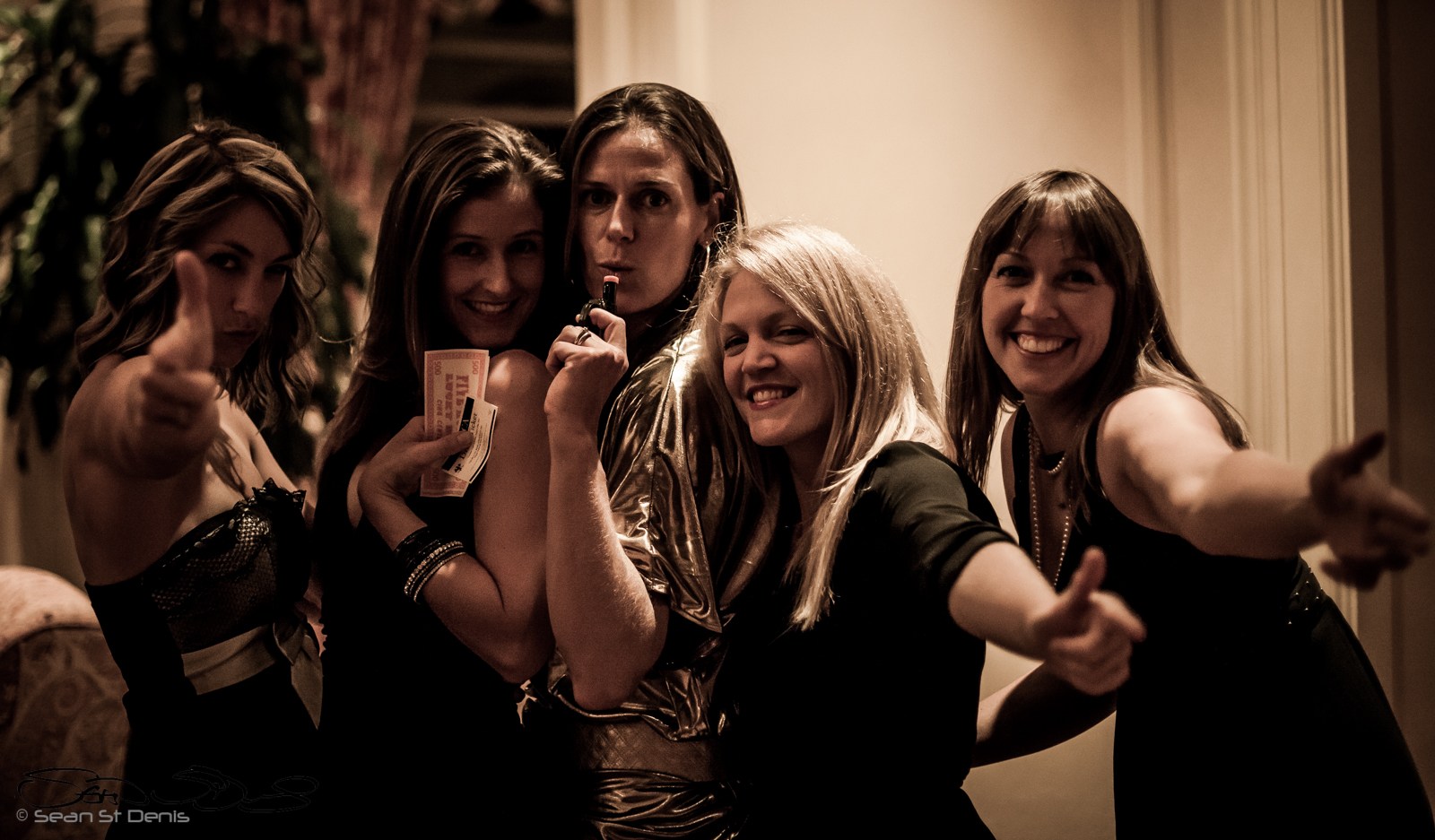 Deep down inside every tomboy – bike riding – bruised and scratched up girl is a bombshell just waiting for a chance to play dress up!

One of the highlights of the evening was the silent auction, which raised money for the Howe Sound Women’s Centre. Additional funny money could also be purchased, with proceeds going to the Women’s Center as well. 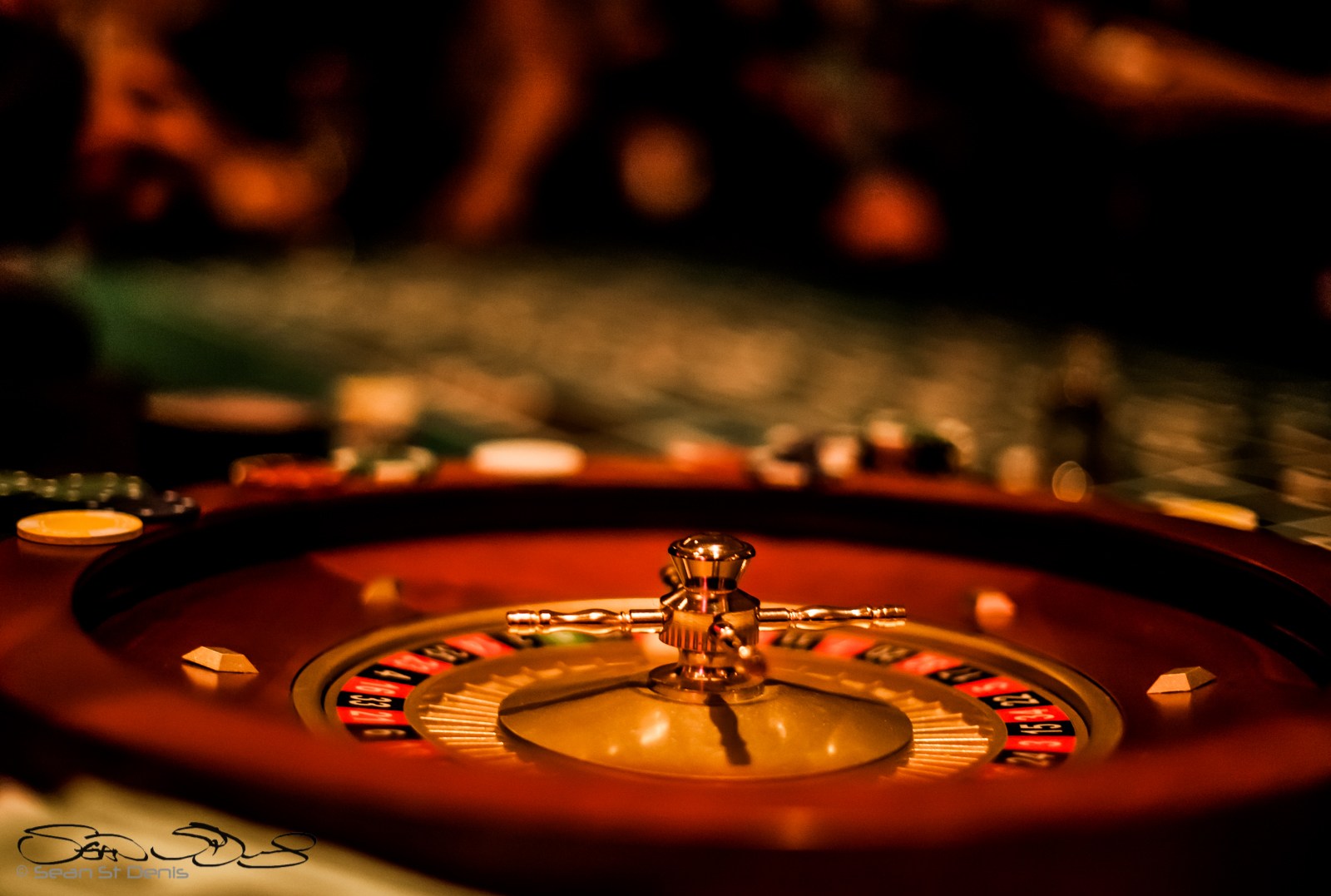 How often can you gamble with funny money and have it go to a good cause?

Blackjack, poker, roulette… so many ways to pretend you’re a baller like Karla Stefansson. 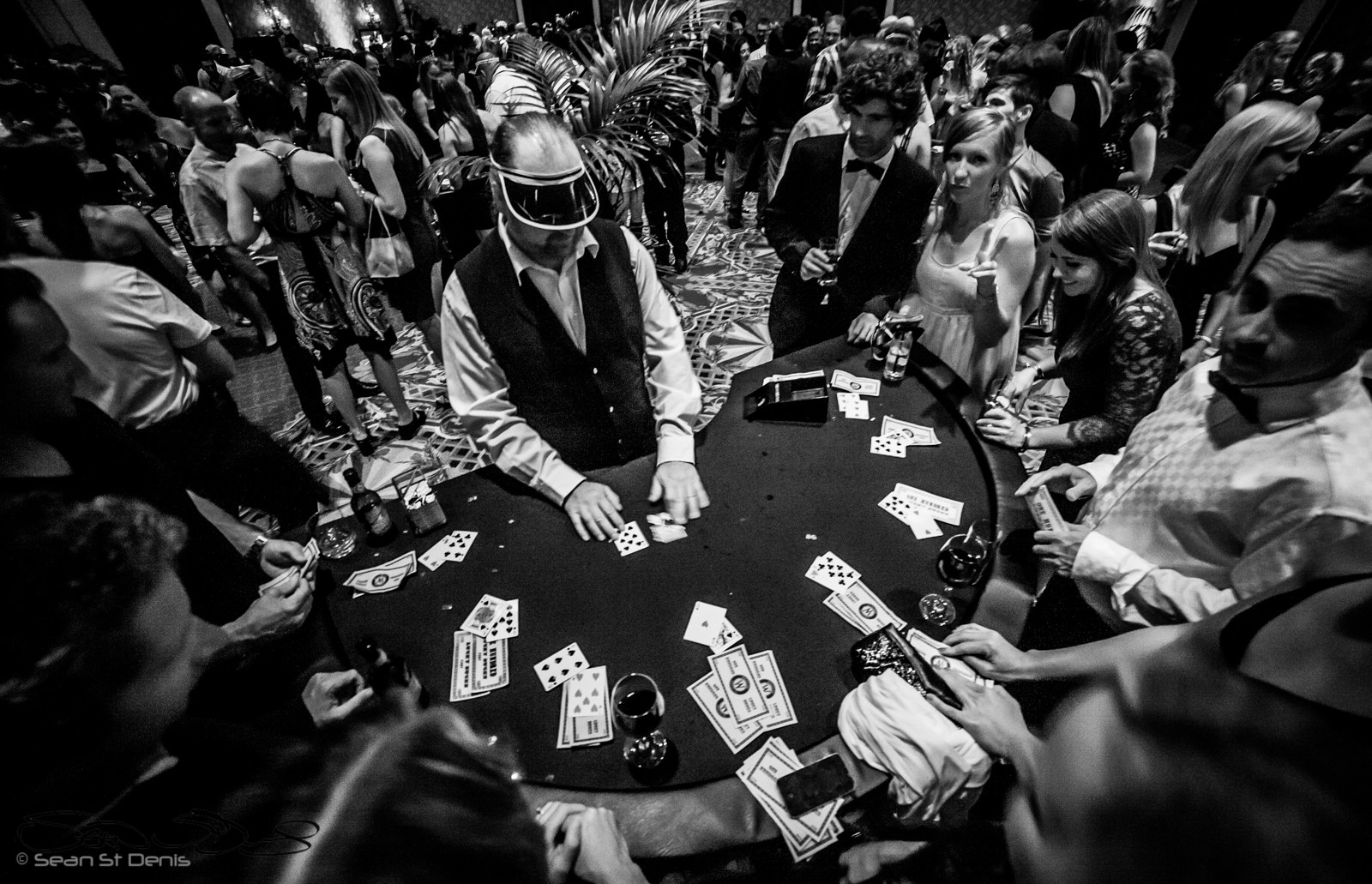 Wonder how many times the dealer had to remind the girls that you’re just playing against the dealer, not everyone on the table?

Although the purpose of the Battle for Bond was to have fun, ride bikes, and raise money for charity, the girls were timed and there were a few winners to celebrate. Rocky Mountain’s Fanny Paquette took the top spot again, proving that she was the ultimate Bond girl today.

For a complete list of the results go HERE. 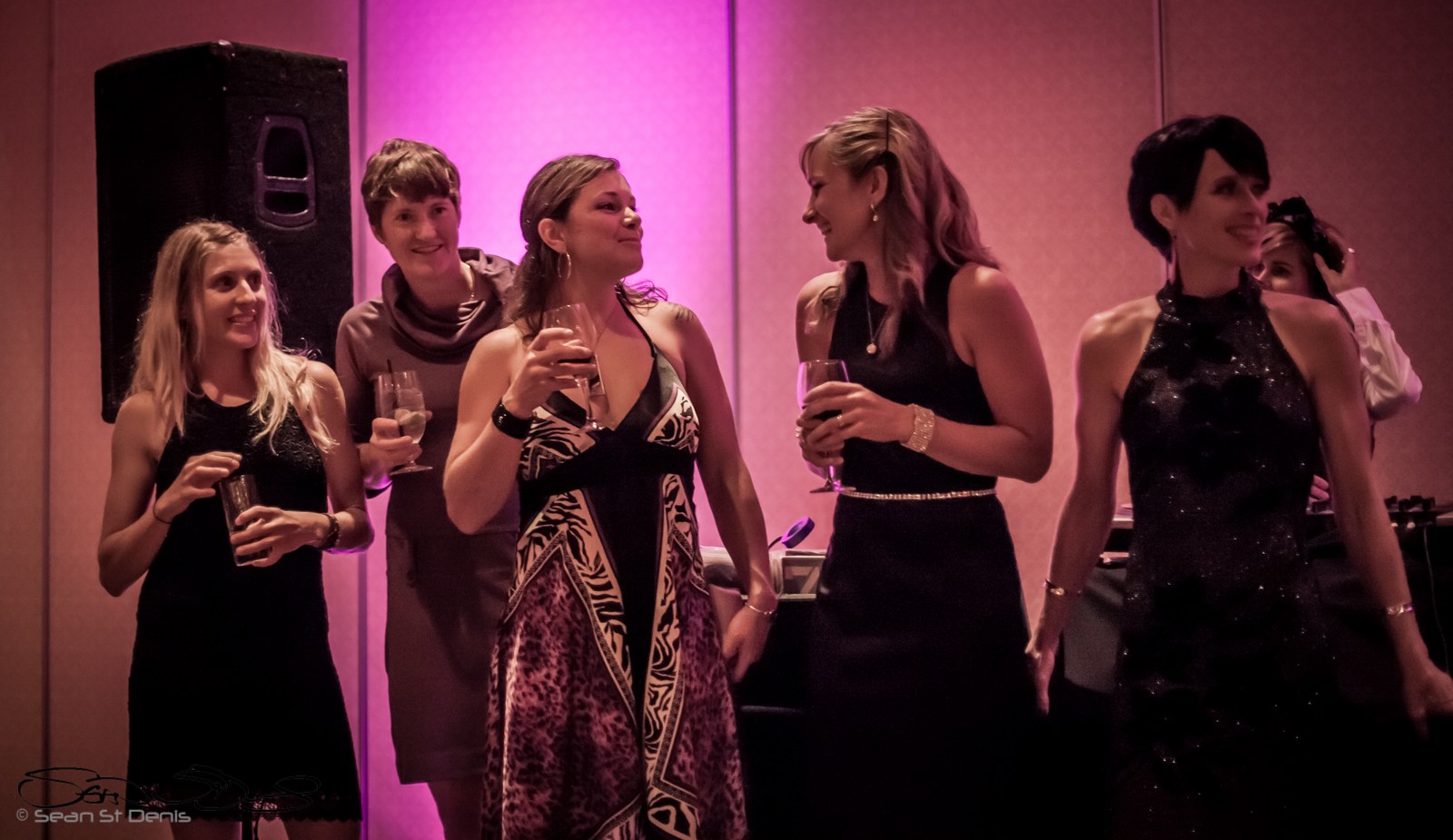 The top 5 Battle for Bond ladies. 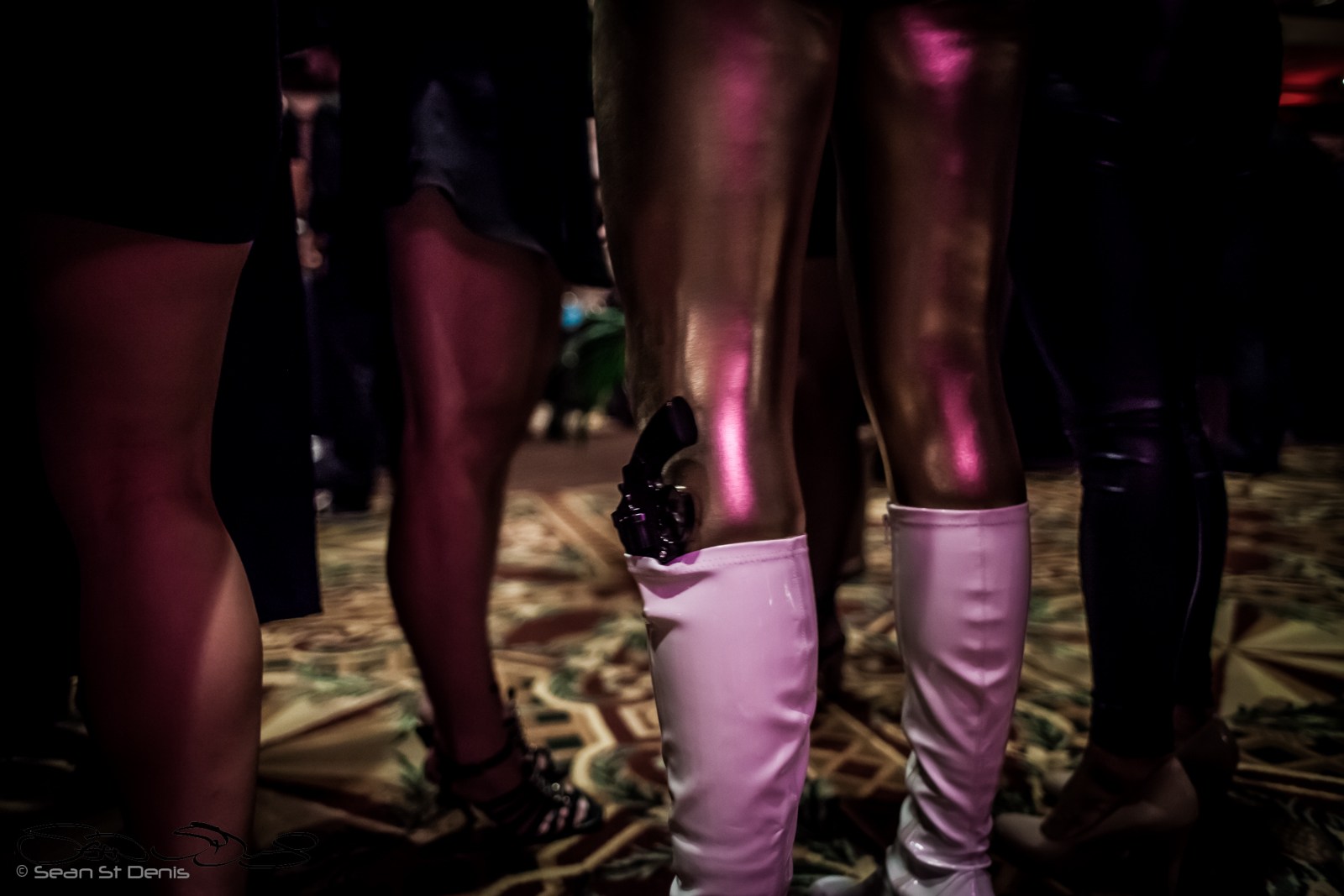 Once the casino shut down, it got real on the dance floor. 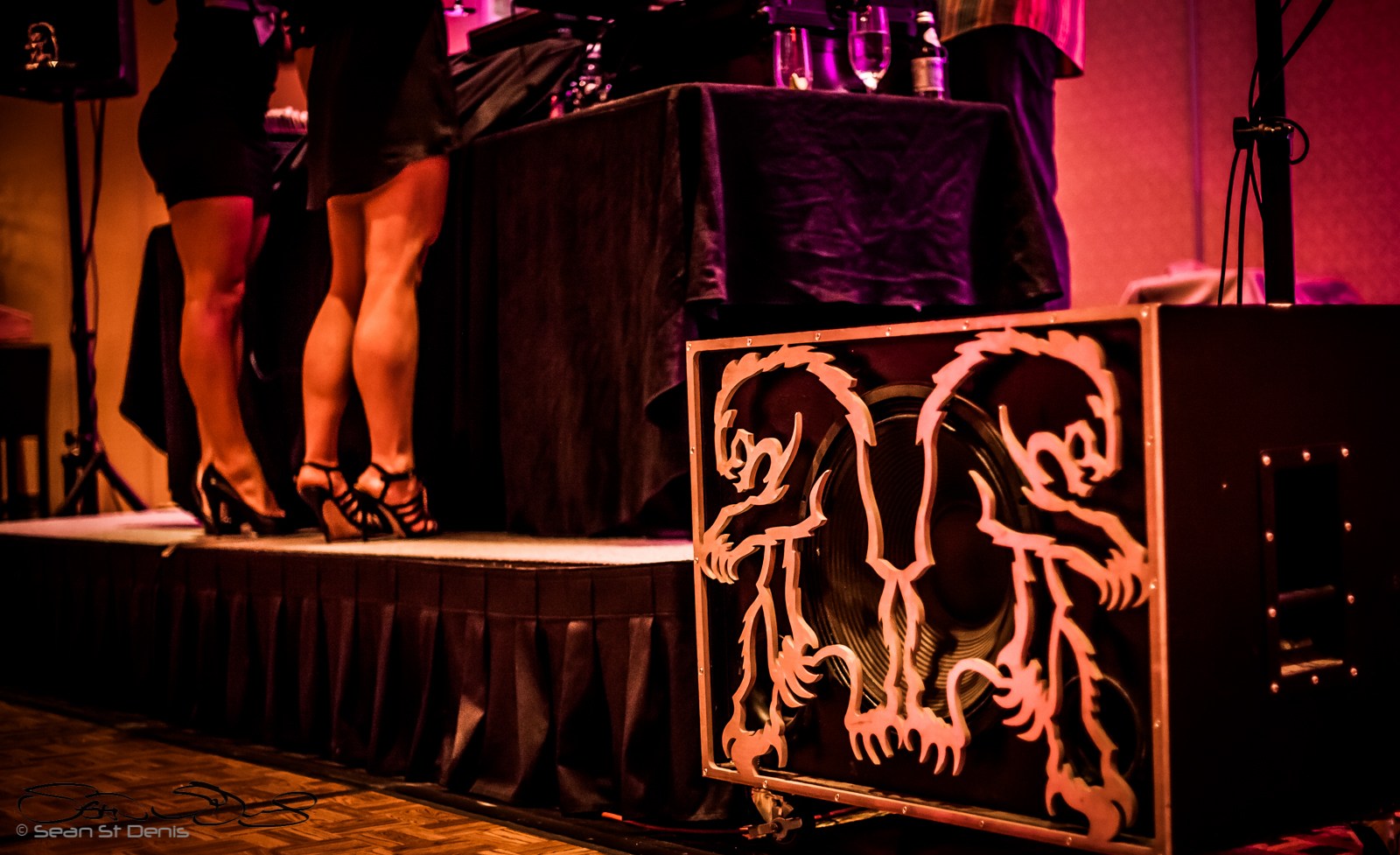 With the awards handed out, the silent auction closed and paid up, and the casino packed away, all that was left was to dance away the night. On behalf of all the other girls who participated in this year’s Battle for Bond, a special thank you goes out to WORCA and Clark Lewis for organizing this day of delight, all the wonderful volunteers and cheerleaders that made the race so safe and so fun, the sponsors who generously donated their space and goods, and to Sean St. Denis for taking great photos all day and night. 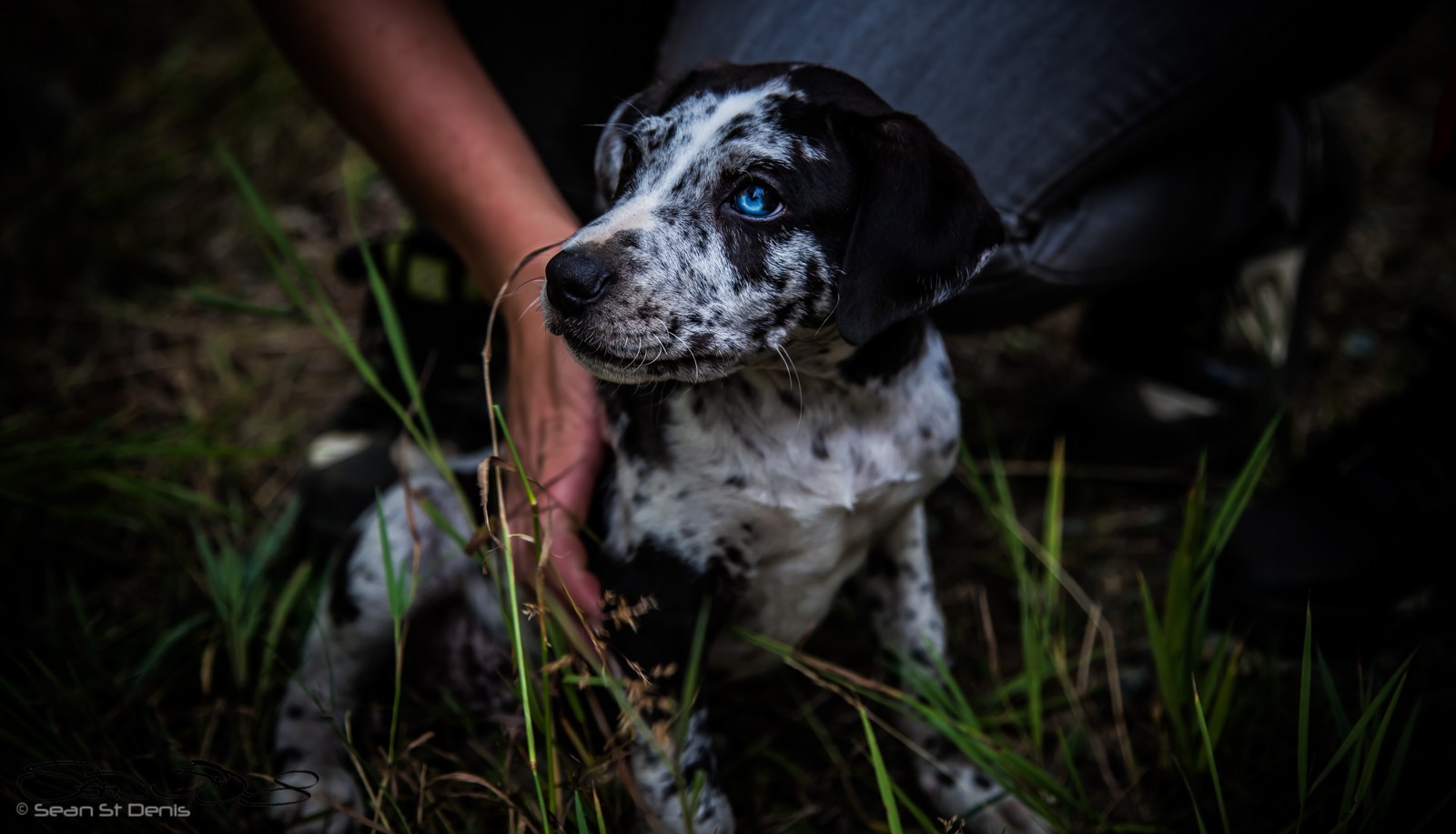 It’s an article about women… did you really think there wasn’t going to be a cute puppy in there somewhere?!

WORCA events are not to be missed but this one looked especially good! Congrats to all the ladies who got out there and slayed the enduro course and the dance floor!

from what I saw, its impossible to think you could have more fun in a day.

check out the race times…shredders!

Awesome. Well done to all involved.