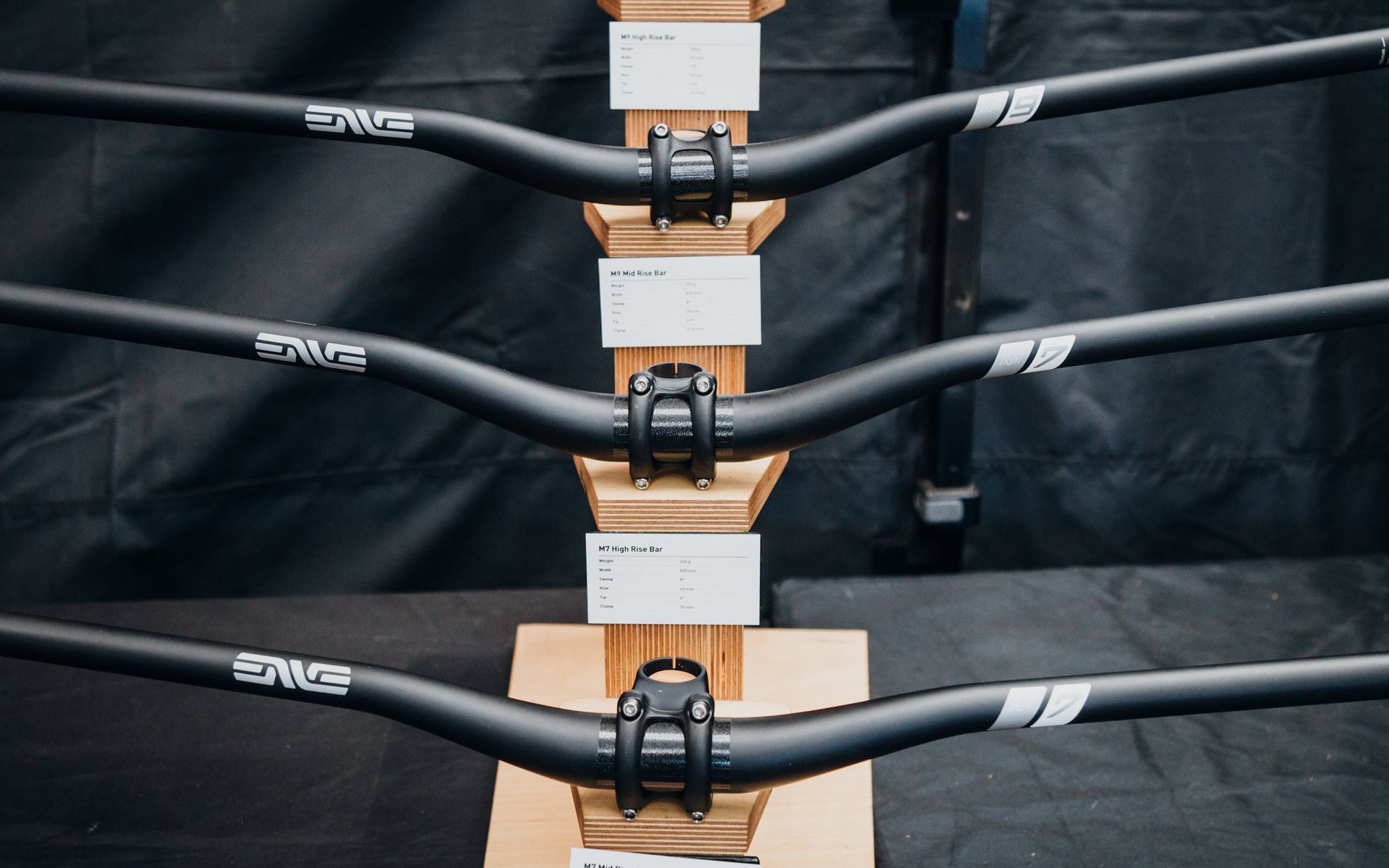 ENVE announced an updated line of handlebars and stems during Sea Otter. The new range is intended to reflect the structure of current M-Series products, which should make it easy to select the appropriate product for your needs. Gone are the SWP, RSR and DH, and in are M5, M6, M7, and M9. The new series is intended to better fill out the requirements of riders, with ENVE noting that there was a bit of a gap in the current line. ENVE did more than print bold new graphics on existing products with there being more to the new parts than it may appear.

Despite the series matching the already established naming structure, ENVE was quick to note that the variations throughout the series should better serve riders with less need for customization. An example of this is a rider on an aggressive 160mm trail bike wanting a bar at 750mm wide. Rather than shoot for the M7, that rider may be best to look at the M6, which measures in at 780mm stock and can be cut to 750mm with no negative impact on the flex properties of the bar. Cutting a wide bar down too much changes the flex pattern, making it stiffer and possibly harsher for the rider and ENVE has worked hard to optimize the feel of each series. As such there are fewer cutting guidelines on each bar. 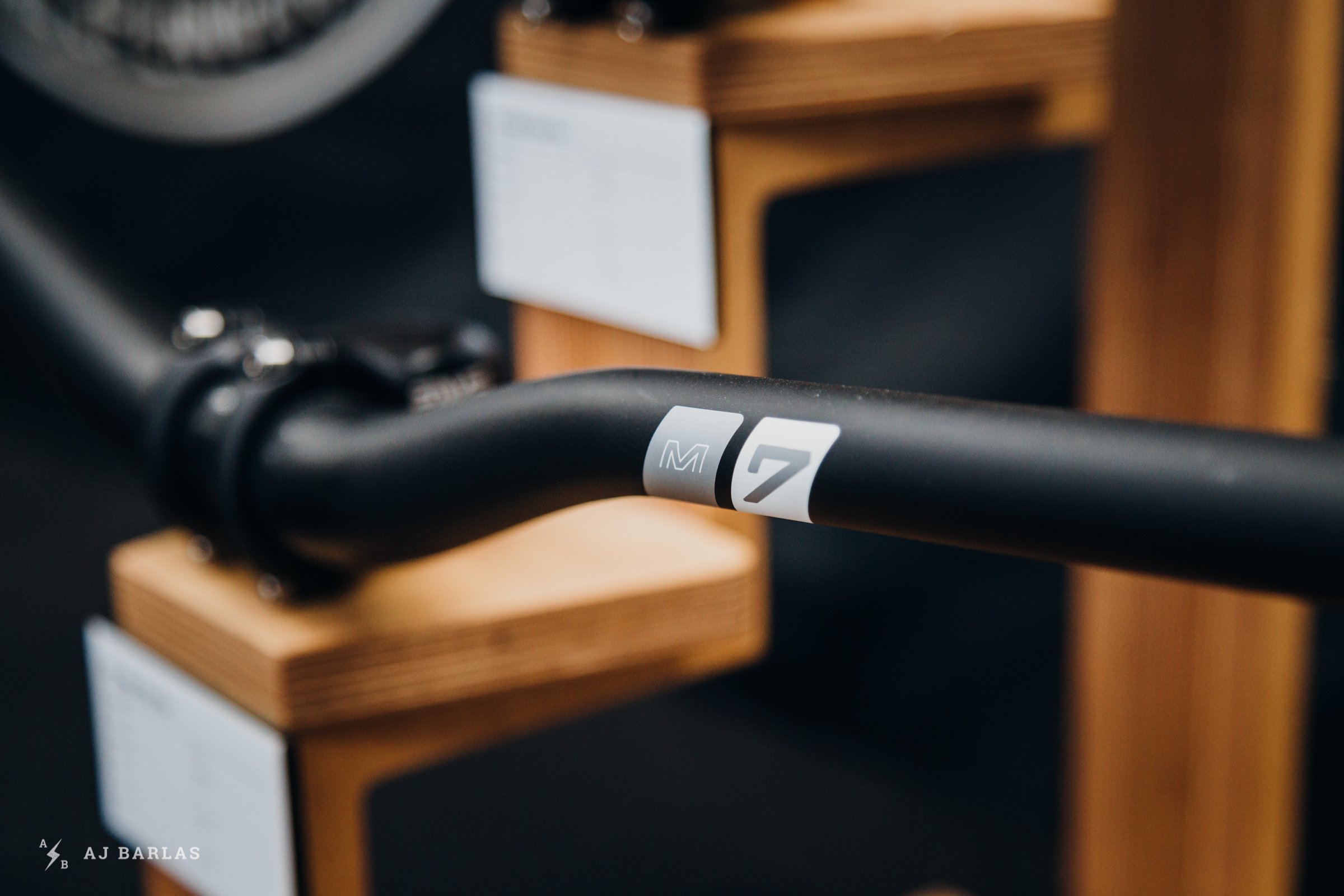 Do you need a carbon stem? Probably not. Some of you may want one however.

The new series of four spreads out from XC with the M5, through to DH with the M9 and while these two ends of the product line were updated, ENVE was proud to announce the first, and currently only, 35mm clamp diameter bar with the M7 series. The M7 handlebar is targeted at aggressive trail riders and ENVE spent a year working on the flex properties of that bar alone, noting that the DH bar was popular for its feel and they wanted the M7 to tie into that. In order to achieve this with the 35mm clamp diameter, they found a need to change the layup and laminate of the bar quite a bit in the area where the most flex is happening (through the bend).

The new M7 series handlebar also sees a slight shift in bar geometry with a move from their more commonly seen 9-degree backsweep and 5-degree tip to an 8-degree backsweep with a 4-degree tip, stating this change will help promote a slightly more aggressive stance on the bike, tying in with aggressive trail bikes and riding the bar is targeted to. The M7 handlebar will be available with 10mm, 25mm, and 40mm rise, measure 800mm wide and weigh a claimed 238g, 238g, and 234g respectively. They will retail for 170 USD. 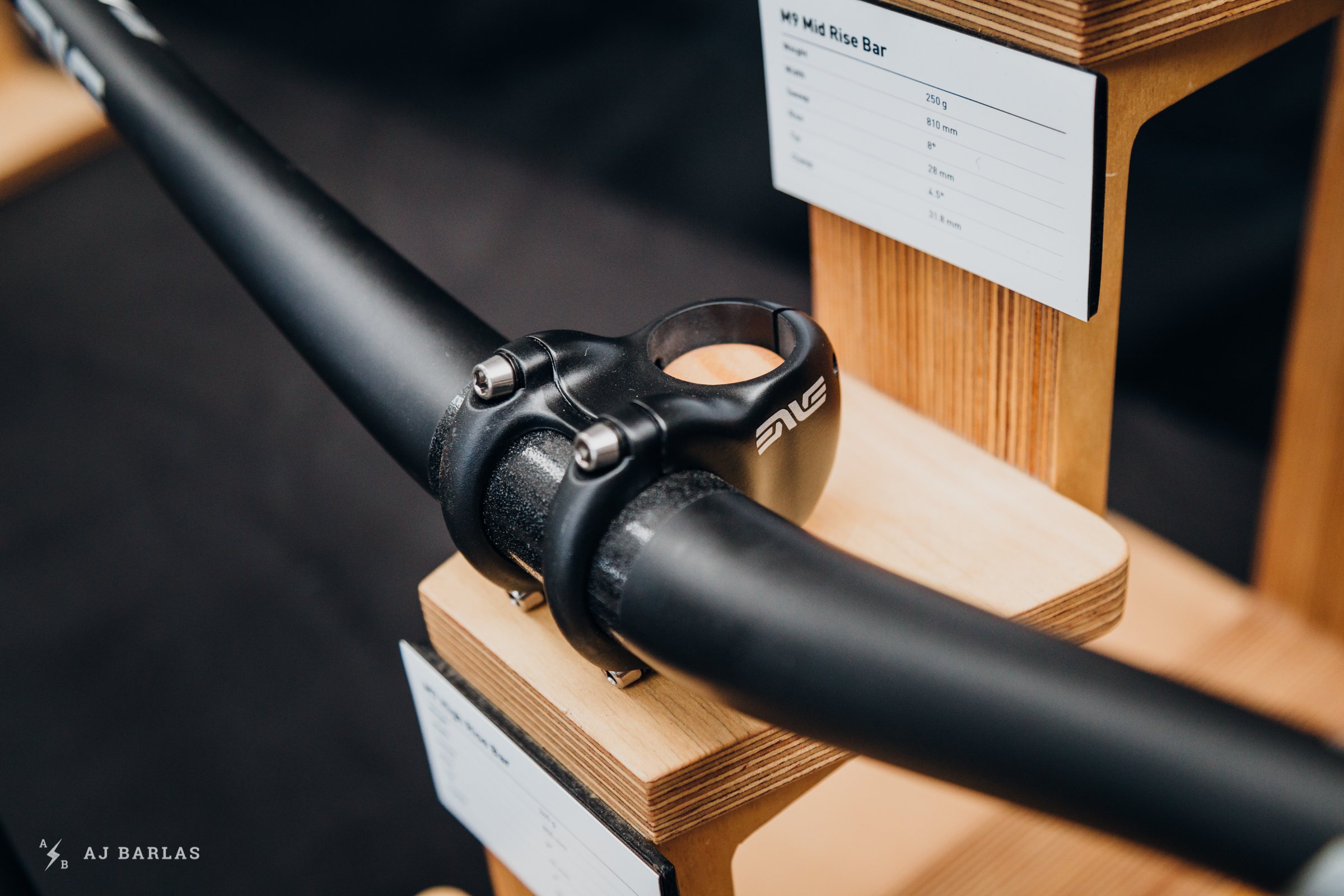 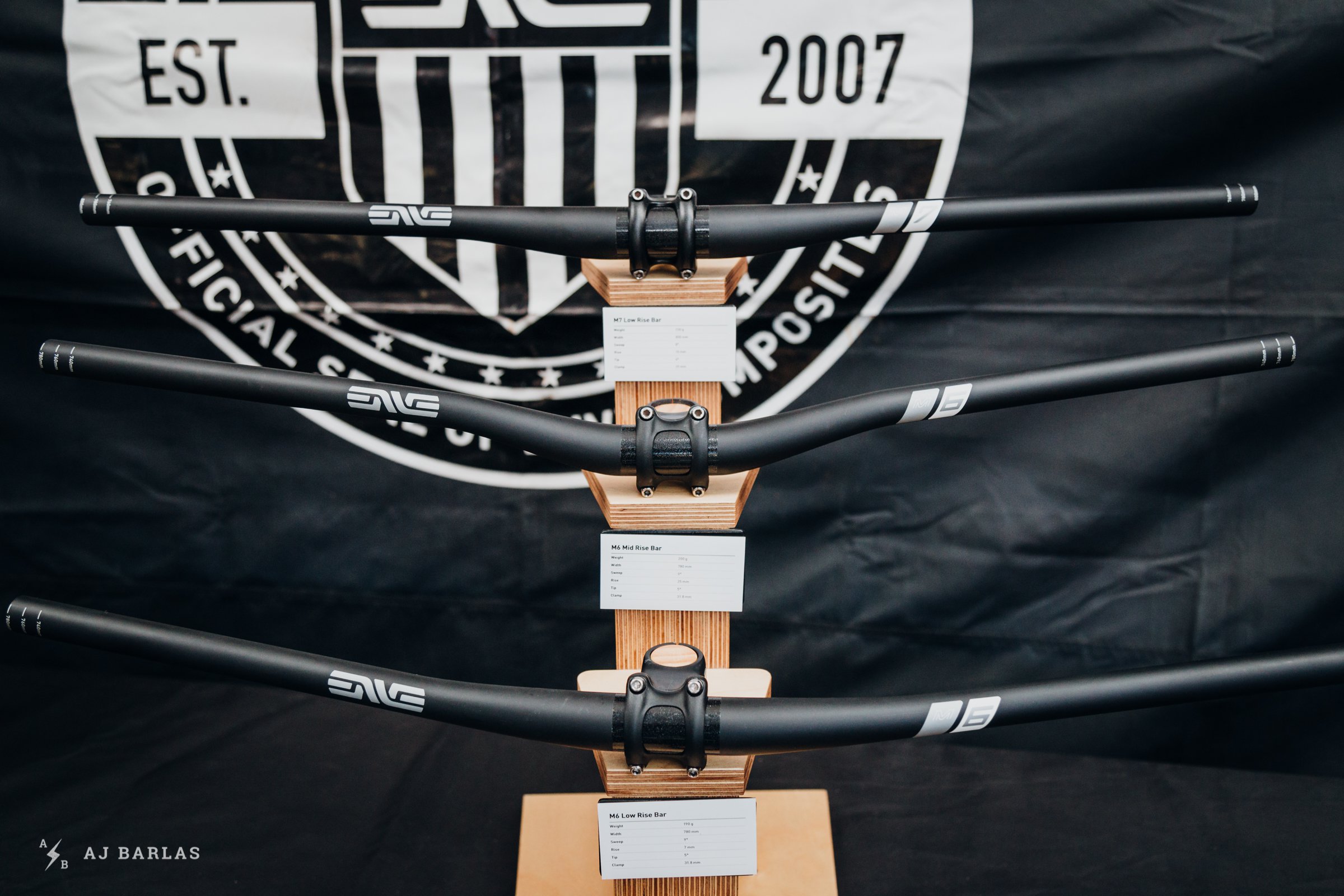 The new M5 and M6 range of bars paired with the M6 stem.

The M6 series more or less replaces Enve’s RSR bar but it has been adjusted and provides a wider range of options. It's now wider, jumping from 760mm to 780mm, and there are now two rise options; 7.5mm and 25mm. Flex was obviously a focal point in the changes but the geometry remains unchanged with a 9-degree backsweep and 5-degree tip. The M6 handlebar will retail for 170 USD. To match, ENVE has updated the stem, giving more options in length while keeping the +/- 6-degree rise. It is now available in 40, 55, 60 and 75mm lengths and will retail for 280 USD.

Starting to wonder why there aren't more options available for the angles on handlebars. I recently swapped out my bars for Salsa Rustler 2 bars with 11 degrees back sweep. That extra 2-3 degrees back is a very noticeable difference that is working great for me!

You're onto something rvoi. There are more smaller players beginning to work with what could be considered more extreme bar geometries, like the SQlab bars Andrew tested last year. As to why there aren't more with similar angles, not too sure but perhaps we can find out? ;)

I don’t believe that it’s necessarily better, but some seem to find it more comfortable. Andrew’s review (linked above) notes some benefits that he encountered. However, having options is a good thing.

I've often wondered about this myself.. It does make some sense to me that (because your shoulders aren't getting any wider) as you add 100+mm to your bars, your hands might end up pointing further away from each other. So it follows that a degree or 2 of additional backsweep might suit the new situation better..? I think this is probably more relevant when seated that when out of the saddle in full attack mode. I really like the added control I get from my new 800mm bar but I'm convinced it hurts my wrists more on the climbs.

That is exactly my experience - even with 740-760 bars with standard back sweep my hands start going numb after about one hour into a regular trail ride. I fight it by putting my thumbs on top of the bars in easy stretches or standing up just to change position and relieve hand pressure. The 11 degree back sweep I am using now allows for a more relaxed seated, pedaling position with much less discomfort. It's kind of like having two options instead of always being locked into one position. I don't need to be in attack mode 100% of the ride for what I like to do so it's a welcome option for me.

I have a 12deg backsweep Syntace vector bar on my Patrol. Anytime I ride my buddy's bikes with the traditional 8deg Chromag or Raceface, my wrists are definitely sore afterwards. Same width bar, but more backsweep is what works for me