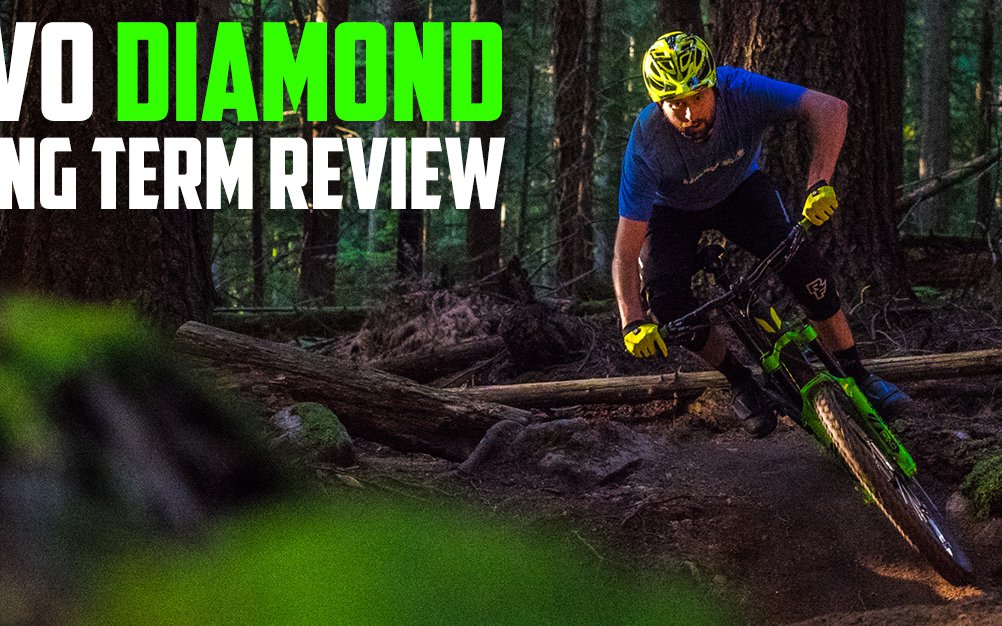 Yes, I’ve said it before (probably) – I don’t really like specifically reviewing suspension forks (perhaps this is why it took me so long to write this one). Throw a fork on the front of a complete bike and I’m happy to give it a few sentences. My feeling is that they either work, or they don’t. If they don’t work, you talk about what you did to fix them. If they do work, what do you talk about then?  How stiff they are? Unless it’s a noodle, I probably won’t notice. The intricacies of the suspension tune?  Ya, most of those guys didn’t know what “mid stroke support” was until that Pike press release came out. Or am I just bitter because of my inadequacies?  I don’t know. 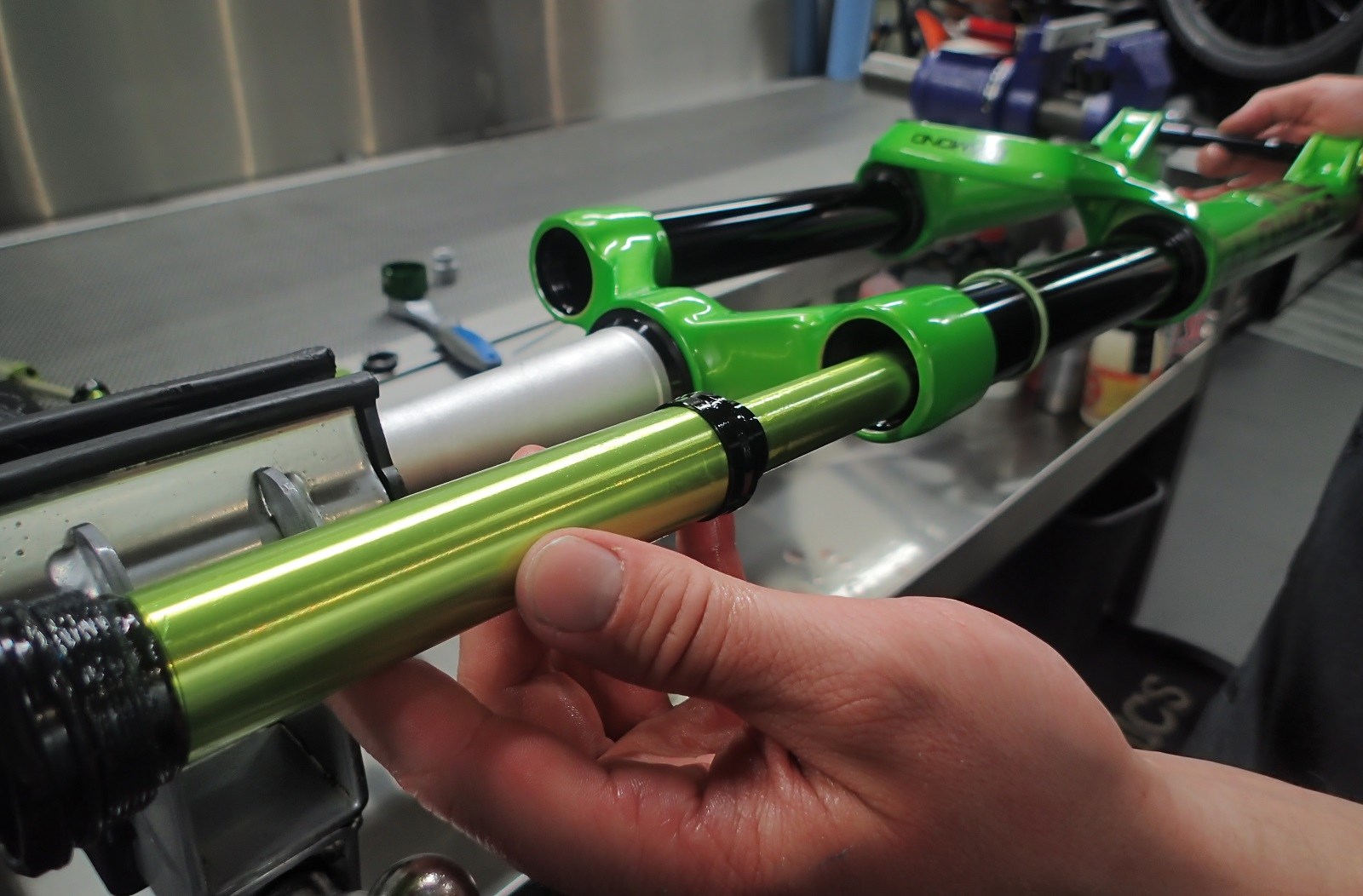 Yes – she’s even green on the inside. Photo – Andrew Major.

Which brings us to my problem. This is a really good fork. I don’t really know what to talk about.

Thanks to Andrew, I have even less to talk about here. He and Alex Woikin at Suspensionwerx tore it apart a few months ago and talked about the overall build quality and got all up in the anatomy. What’s left to discuss?  A couple of small issues, I guess. 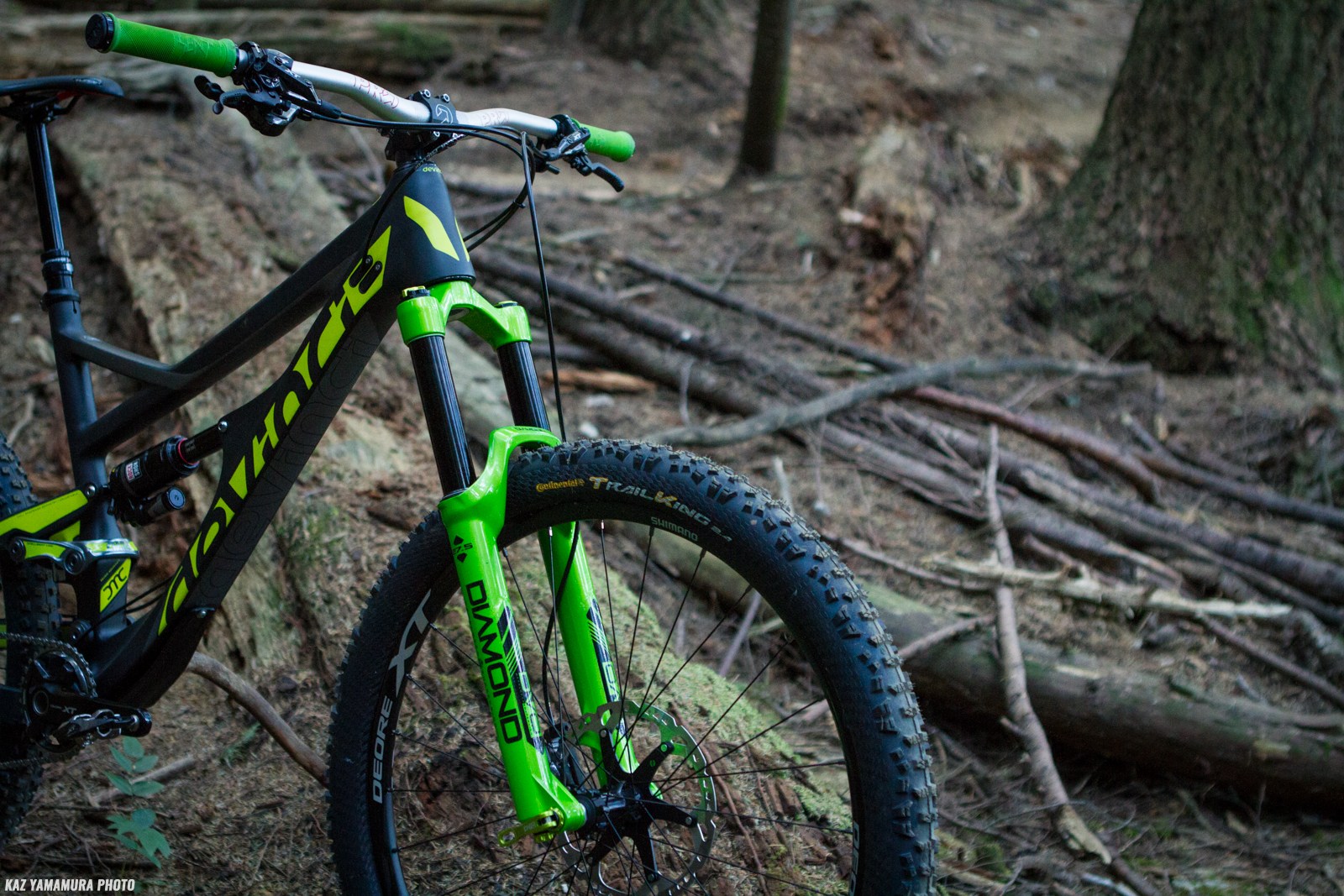 The QR is pretty straight forward, although with no collet or pinch bolts the tolerances are pretty tight. After one late night ride, I was left with a stuck axle as I tried to pull the front wheel off so that I could slide it into the back of my truck. I think it was just some dirt in the bore. This only happened once, and I just bashed it back through, screwed the axle in and then re-did the process and things were fine.

The other small issue is that the clicks on the high-speed compression knob aren’t very pronounced. More like non-existent. It did not result in the knob backing off or anything like that, but it was a bit challenging to count clicks for set-up. Speaking of which… 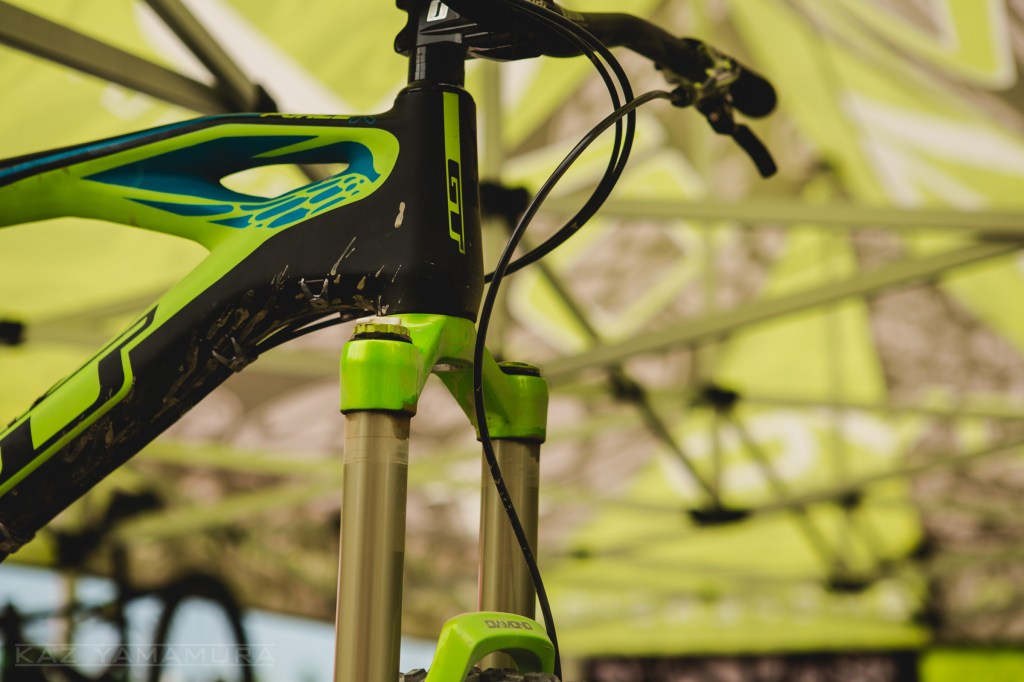 Is that a Kashima Diamond? Spotted at Sea Otter. Photo – Kaz Yamamura

Set-up is an interesting conversation, because it changed dramatically after Alex’s magic teardown.

Before that teardown, I went to the handy DVO set-up website and punched the base settings into my fork. I rode it and I didn’t really feel the need to change much from there. Things were good. 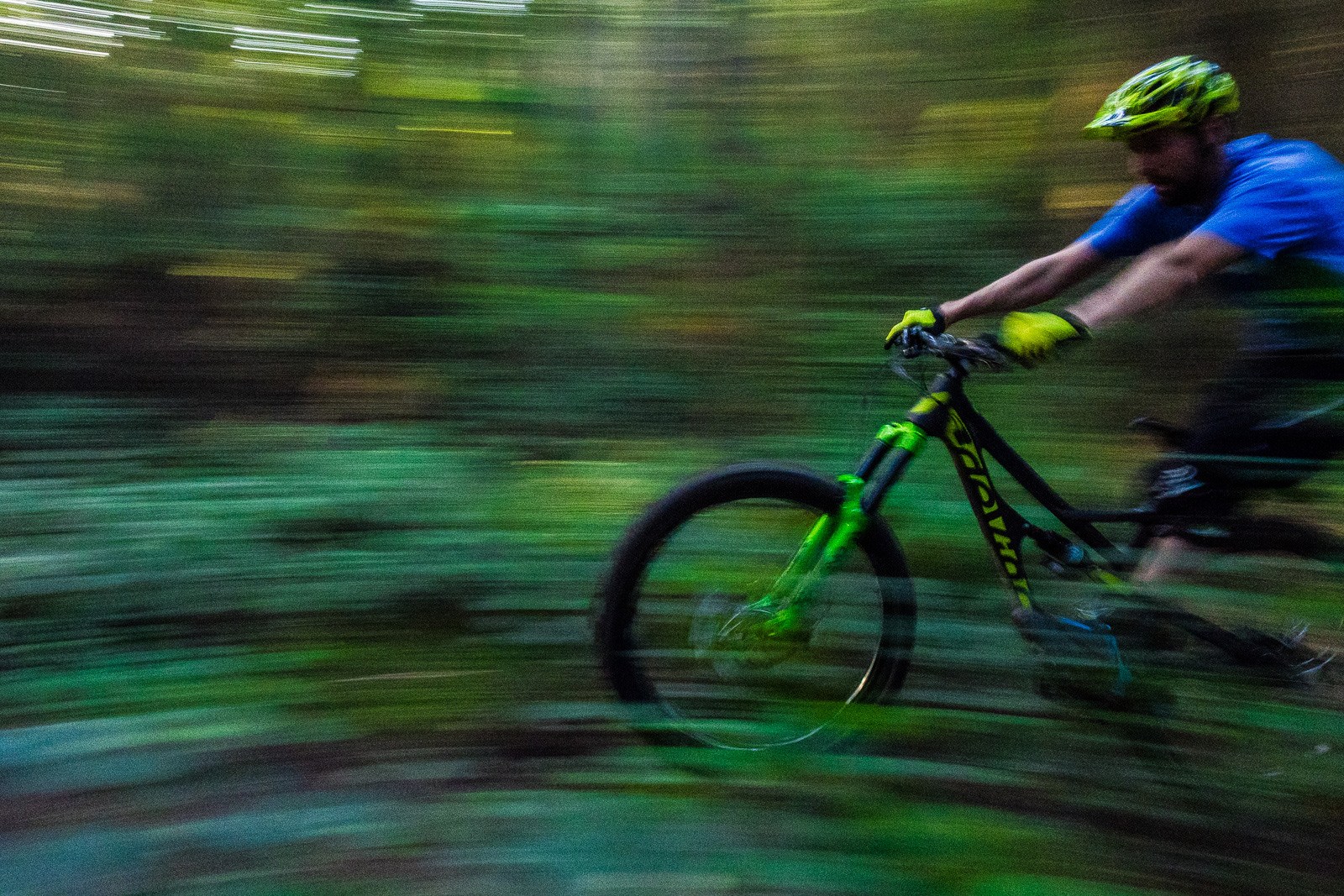 Post Alex’s teardown/lube session, I found myself needing to go a full weight class (or two) up in settings to prevent myself from using all the travel. I ended up running Clydesdale levels of air pressure and gave it a click or two more in high-speed compression to boot. The extra Alex attention made it that much slicker. Yes, I was near the recommended service interval which probably contributed somewhat to the relatively sticky pre-teardown feel. But the lesson here is that even a relatively new, high-end product can benefit from some attention.

What I also learned playing around with set-up is that there really is something to this OTT thing. Allow Andrew to explain. Somewhat. From an e-mail where I asked him a question about top out springs.

In a perfect world companies using coil negative springs, which are becoming more rare every year, would offer multiple rates as rider weight vs. air pressure creates a large variance in the negative spring force needed to overcome the initial friction in an air system. OTT is a very good compromise.

Adding oil to the positive air chamber, on a fork with a coil negative spring, does two things. First, it provides good lubrication that doesn’t break down or foam as easily under pressure. Second it adds progressiveness to the air system. For anyone experimenting with adding oil I’d recommend starting with <5ml. I’ve been running +5ml in the X-Fusion Trace and even that small volume makes a pronounced difference. Like adding tokens in a current Fox or RockShox air system, the additional fluid can affect the amount of travel regularly available.

From this I learned things. One, it is possible to increase the progression of this fork with the old fashioned “oil in the spring chamber trick.” Two, it might not be necessary. 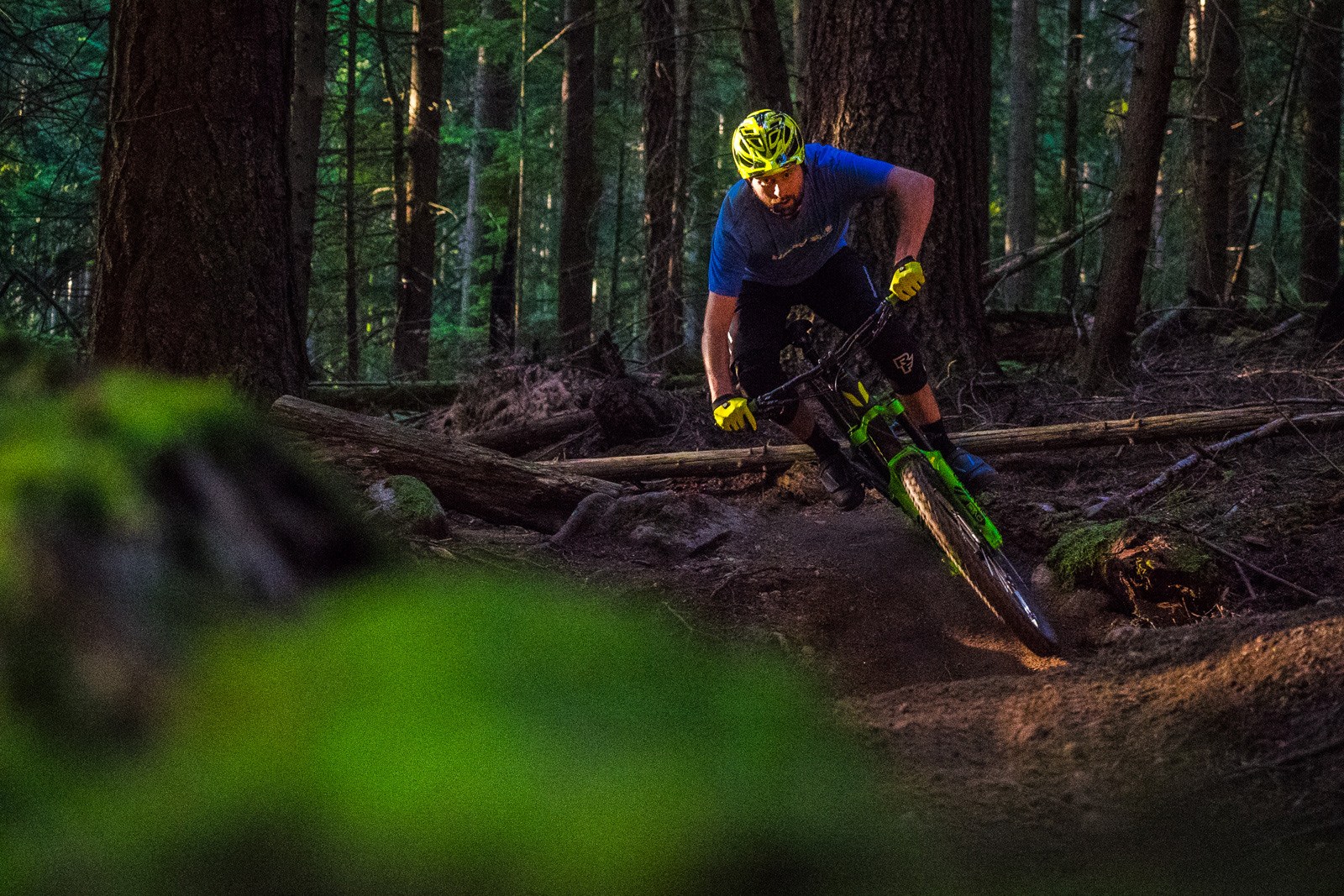 Even as I increased the air pressure in the fork dramatically, it left the initial stroke of the fork largely unchanged. As Andrew pointed out, there is some impact on how the OTT interacts with the air spring, but what I found is that you can tune these things quite independently. Throw in a very usable high-speed compression damping system and you have a remarkably controllable fork. 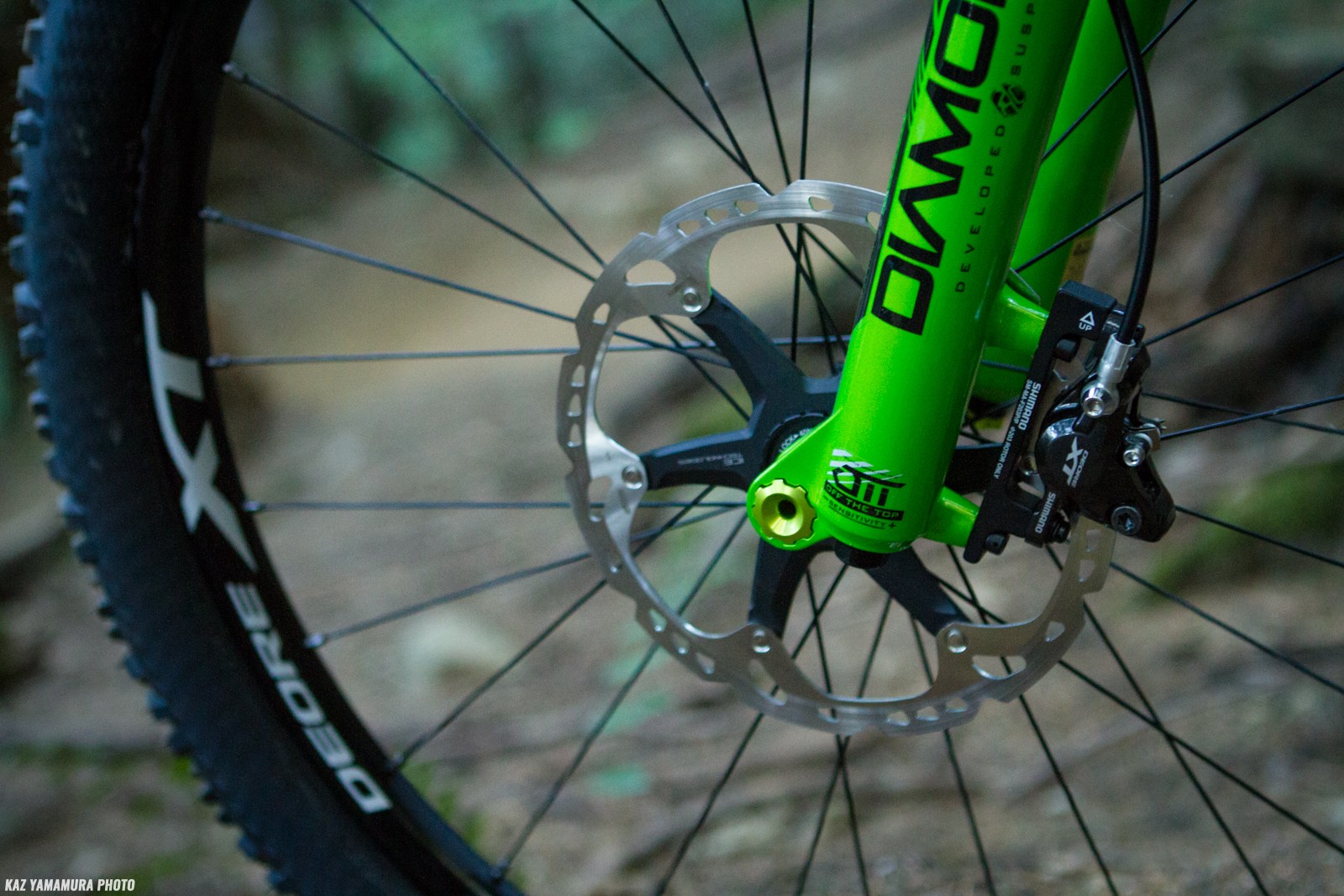 Dave had a little issue with the axle – but nothing out of the ordinary. Photo – Kaz Yamamura

One thing seemingly lacking is quick change tokens to adjust your air spring volume/spring rate, but I didn’t really feel like this was necessary. Most people should be able to find their sweet spot through the combination of OTT, air pressure and high-speed compression without throwing in yet another variable.

I’m struggling a bit to put the ride of this fork into words. I’ve hopped back and forth onto a few different forks in the last couple of months, and I feel like the best thing I can say about it is coil-like. This gets thrown around a lot, but it feels apt here. The travel feels very consistent, all the way through the stroke. There’s no rampiness. No wallowing. No harshness at any point. Just smooth, consistent and predictable travel throughout. 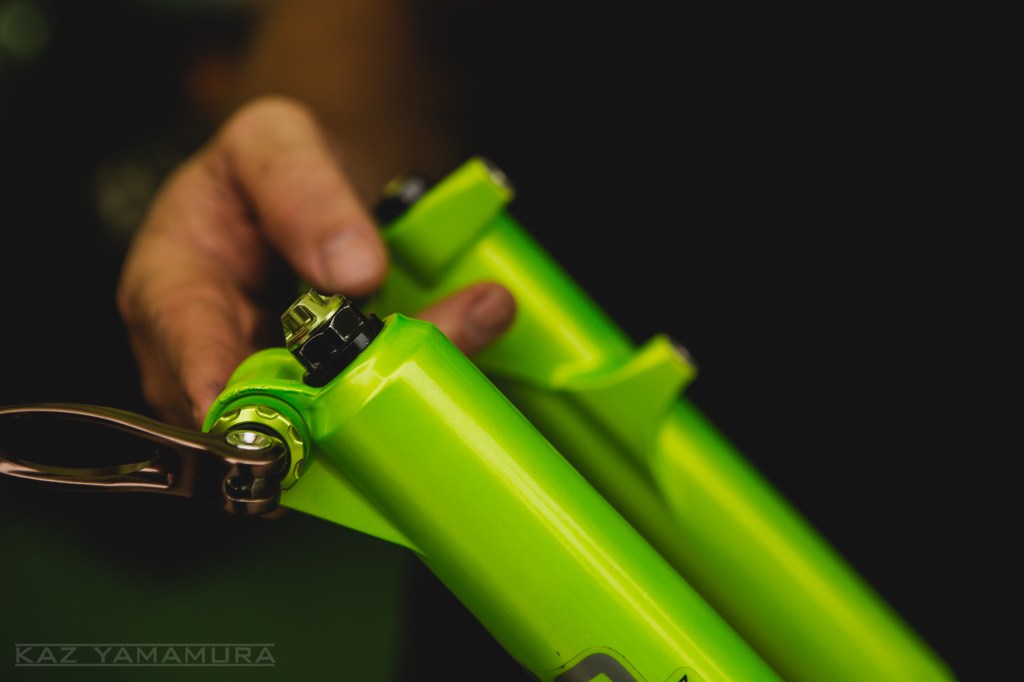 To throw a comparison into the mix, I recently spent a couple of months on a Fox 36. Both forks are similarly competent and allow you to charge through just about anything. But the range of adjustments on the DVO made it that much easier to fine tune how the fork works at the travel extremities.

As mentioned above, I rode the bike under a large range of air pressures and found the fork worked pretty well, even when under-sprung. If your set-up has you consistently using full travel, bottoming out is no big deal, with the only real tell being a buried travel indicator O-ring on the stanchion. But the fork really does come alive at higher pressure, allowing you to push things harder and carry more speed. 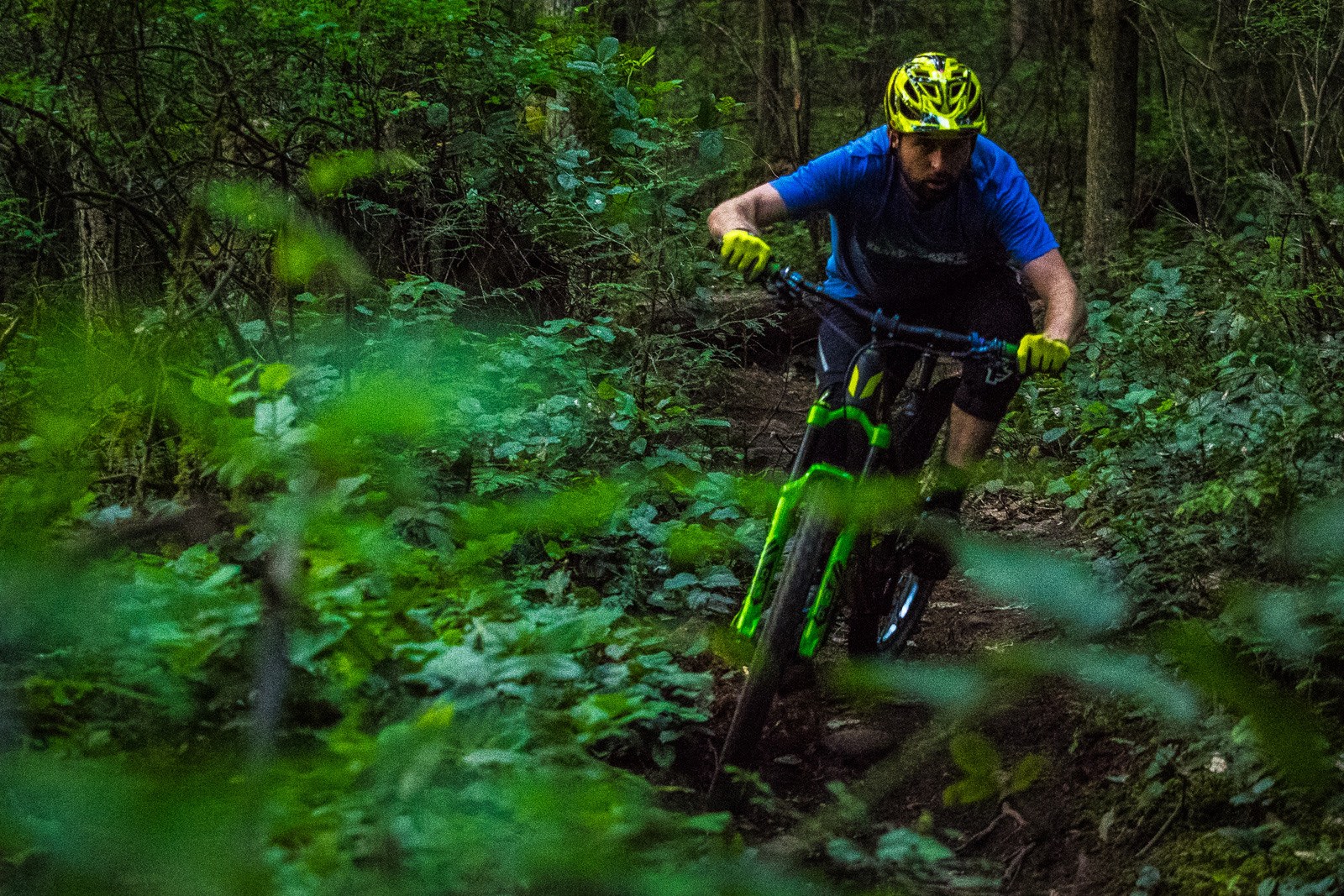 Uncle Dave doesn’t have to say sorry on the trail. Photo – Dave Smith

The chassis is sturdy and feels stiff enough for my liking. The fork seems to go where you point it, and I have no comments, good or bad, about the rigidity.

All in all, this is a great fork. A friend of mine was fork shopping a few months ago and this came up as an option and I encouraged him to head in that direction. Lots of adjustment, great performance and a bit of flash. Who wouldn’t want that?  Of course, he bought a Pike. Draw your own conclusions from the fact that even my close friends don’t take my advice.

Have you considered a DVO fork?

OMG, no stiffness comparison commentary!!??!! what's a fork review without going on about degrees of stiffness?!

This is well timed for me. I've been considering the 36 and the DVO on a new build. The frame is coming with a Topaz… so the DVO would be more matchy matchy. I was leaning towards the 36 because of it's reputation, but if what you say about this fork being like a fork that does fork things, then I'm intrigued.

I've spent a fair amount of time on both…the DVO as above and the Fox on the Yeti that I reviewed a while back. Both are really good forks and I'm not sure you can go all that wrong with either.

I'm sitting here feeling self-important because I've been tuning my forks specifically to have more mid-stroke support for years.

Just ordered one for my Norco Torrent!  Super stoked to ride it.