When we were talking to Santa Cruz about testing one of the new tweener-wheeled V10s, we asked for the journeyman edition. We wanted to try the *ahem* discount version to see if keeping those extra shekels in your pocket is the best plan or if it’s worth mortgaging your soul for the luxury model.

We also wanted to get multiple opinions on the bikes, so we chose two of our testers, Tim Coleman and Mike Wallace, who are currently racing DH and trying to squeeze every second out of a given track. Their results will be in shortly.

For now here’s a look at the bikes and a rundown on the differences between the two. 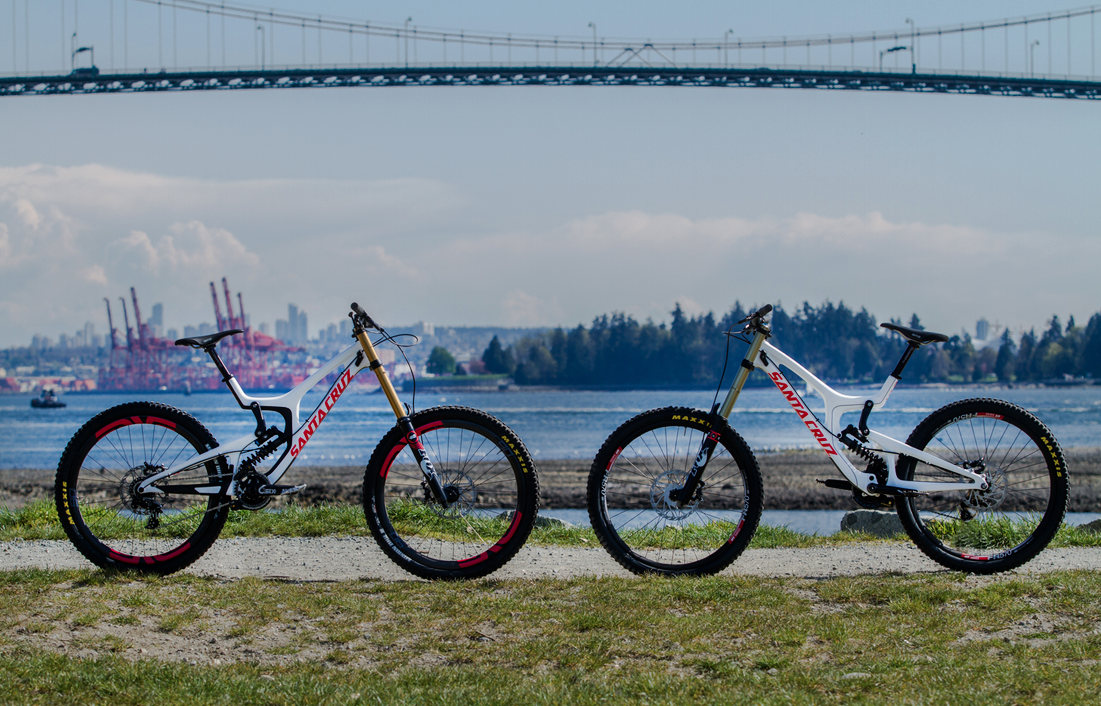 They look pretty much the same from this angle, but the price difference is US$3100 / CDN$3850. The wheels are a give away.

Santa Cruz tells us that both frames are identical in terms of strength and stiffness, but the V10C is laid up with more economical carbon. It will cost you some weight (370 grams or so depending on size) and save you some money. 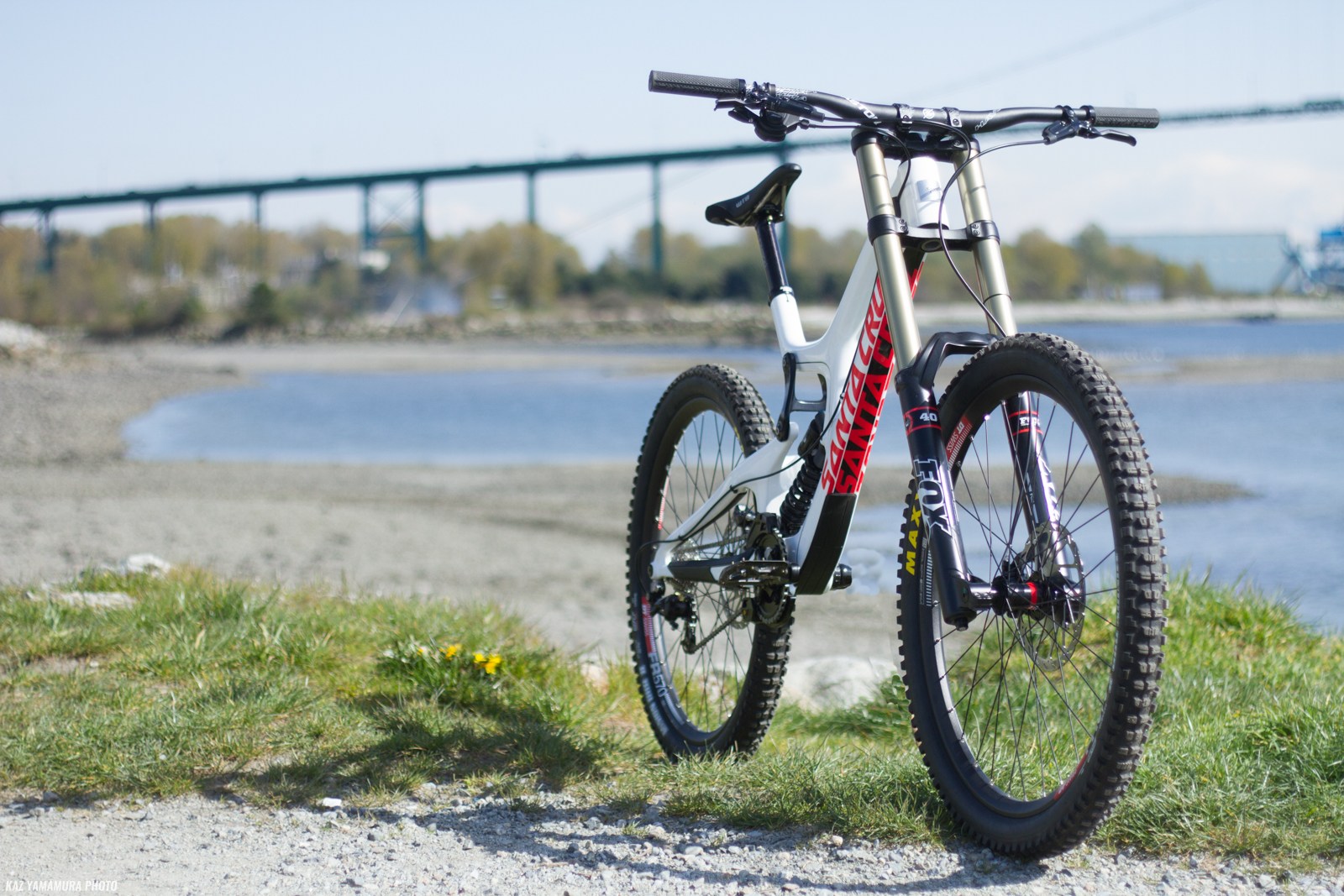 This is the V10C. The biggest tipoff in the complete build is the absence of Enve wheels. It’s a solid build though, and certainly not a bargain machine at a suggested retail of US$5699 / CDN$7299. A consensus seems to be building between our testers that the weak link in the C is the Fox 40 Performance Elite 27.5 Flat Crown Fork. 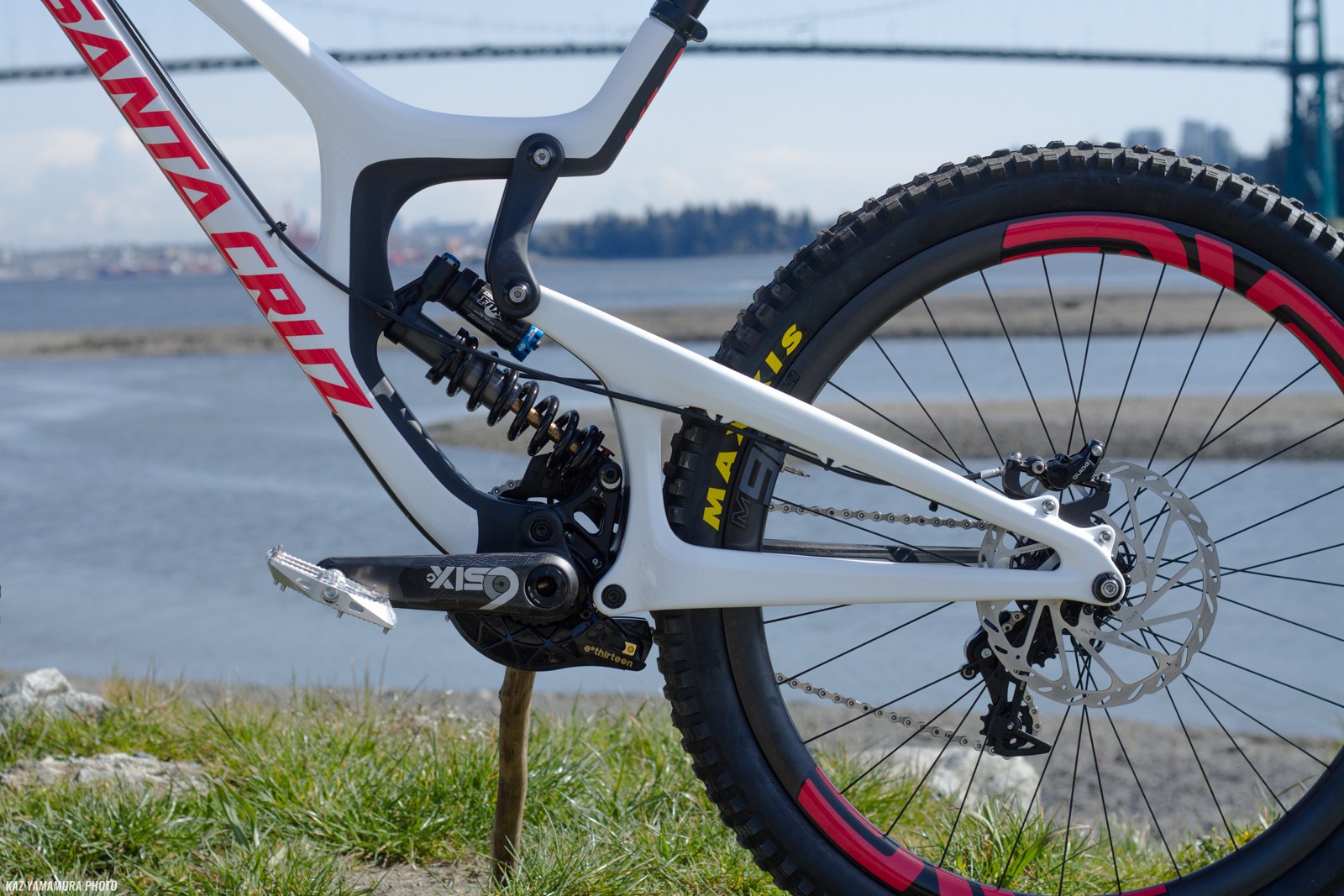 Another visual difference between the CC (pictured) and the C is the subtle black paint detail on the CC. 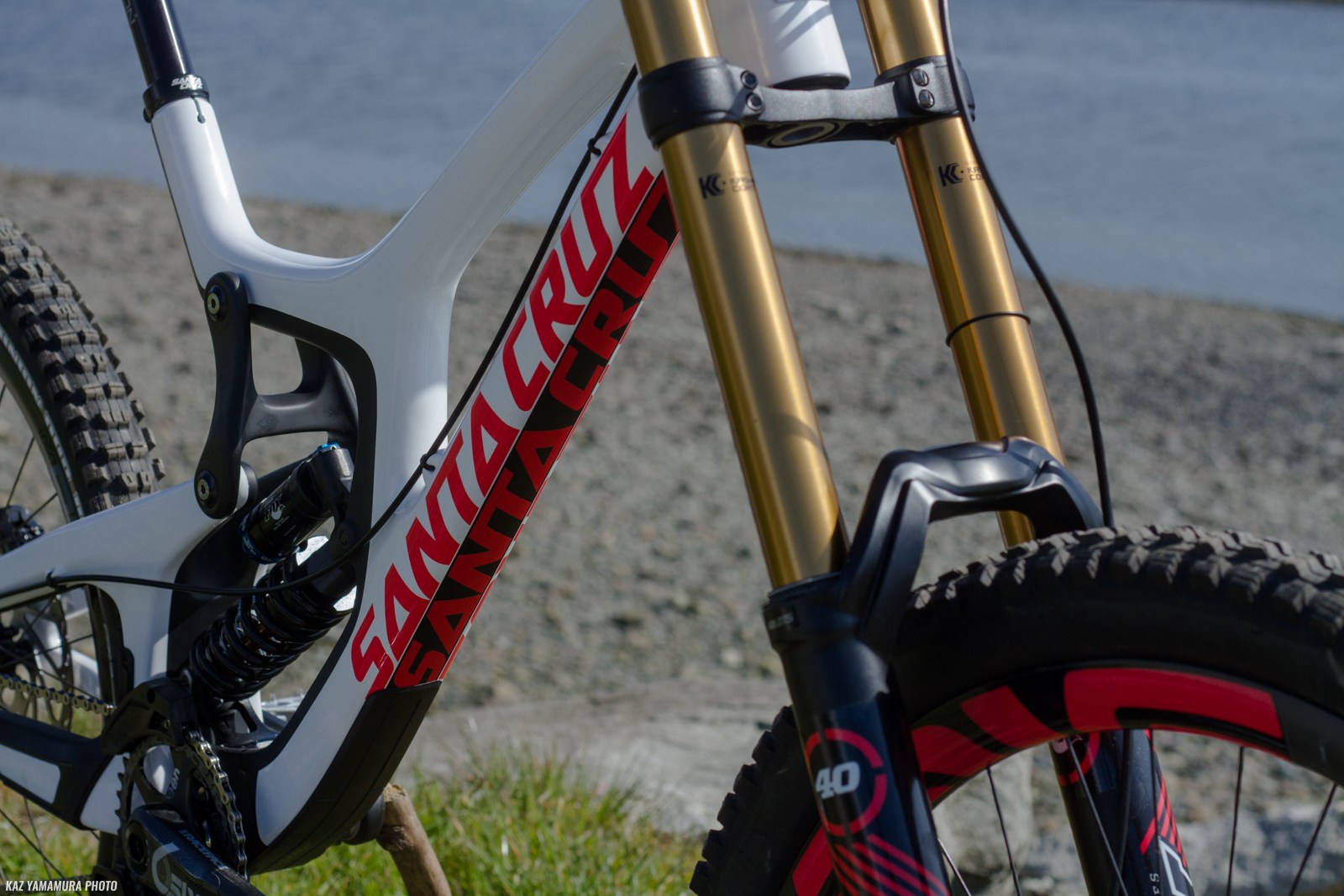 No complaints about the Fox 40 Float RC2 on the front of the CC. 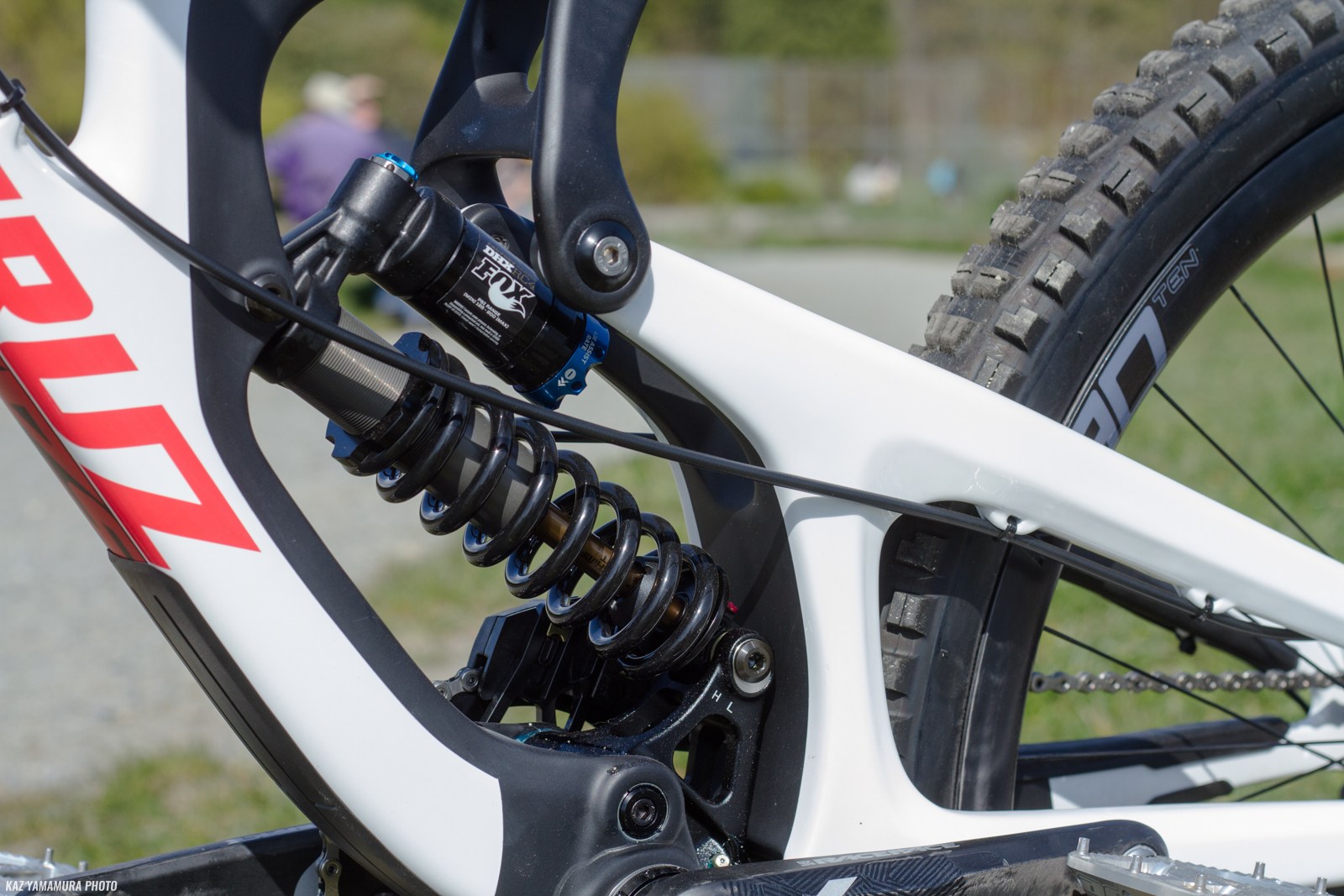 On the rear of the CC you’ll find the Fox DHX4, despite the typo in the spec sheet saying it’s the DHX2 – just as you will on the C. 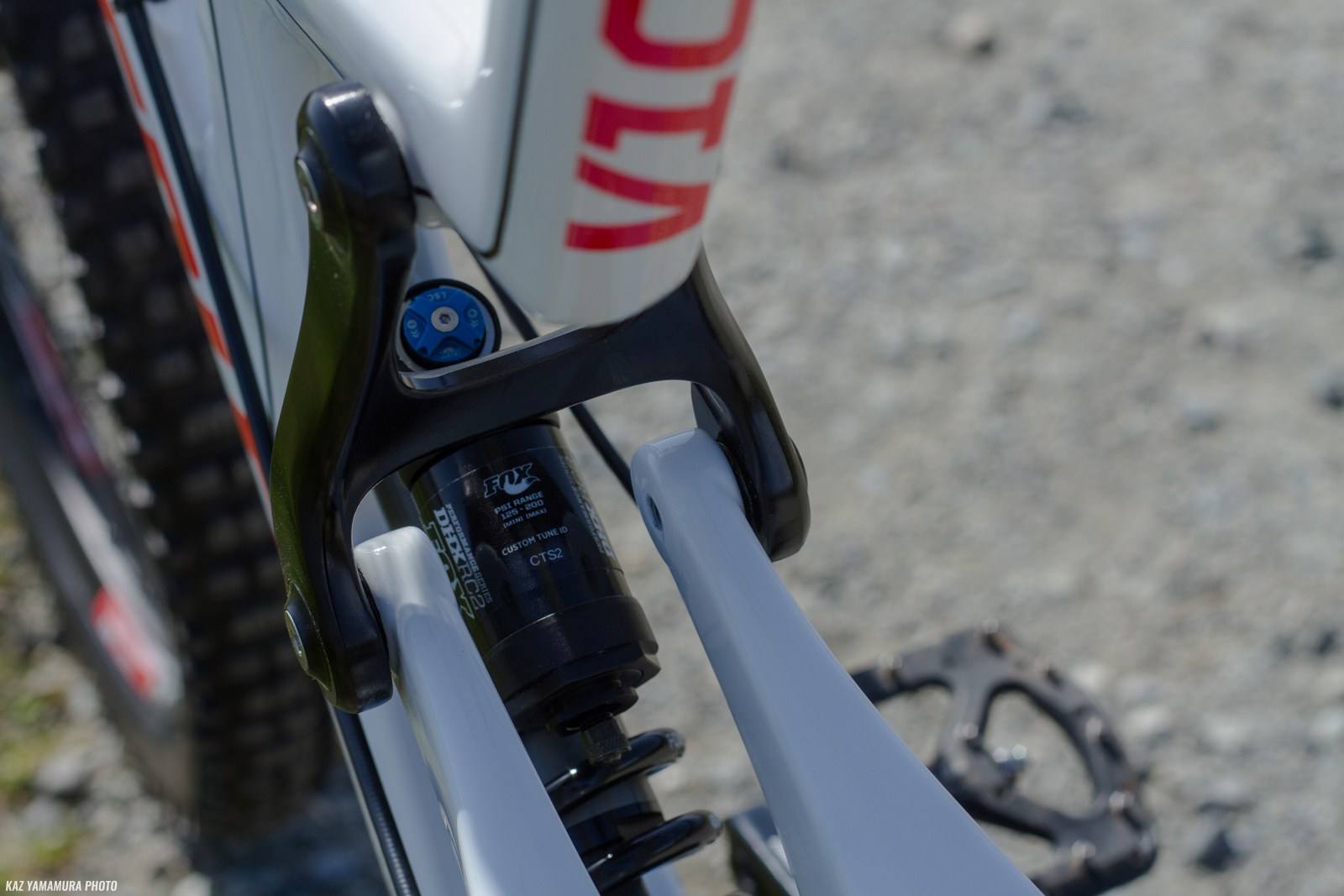 Both models swing on a carbon fiber link plate. 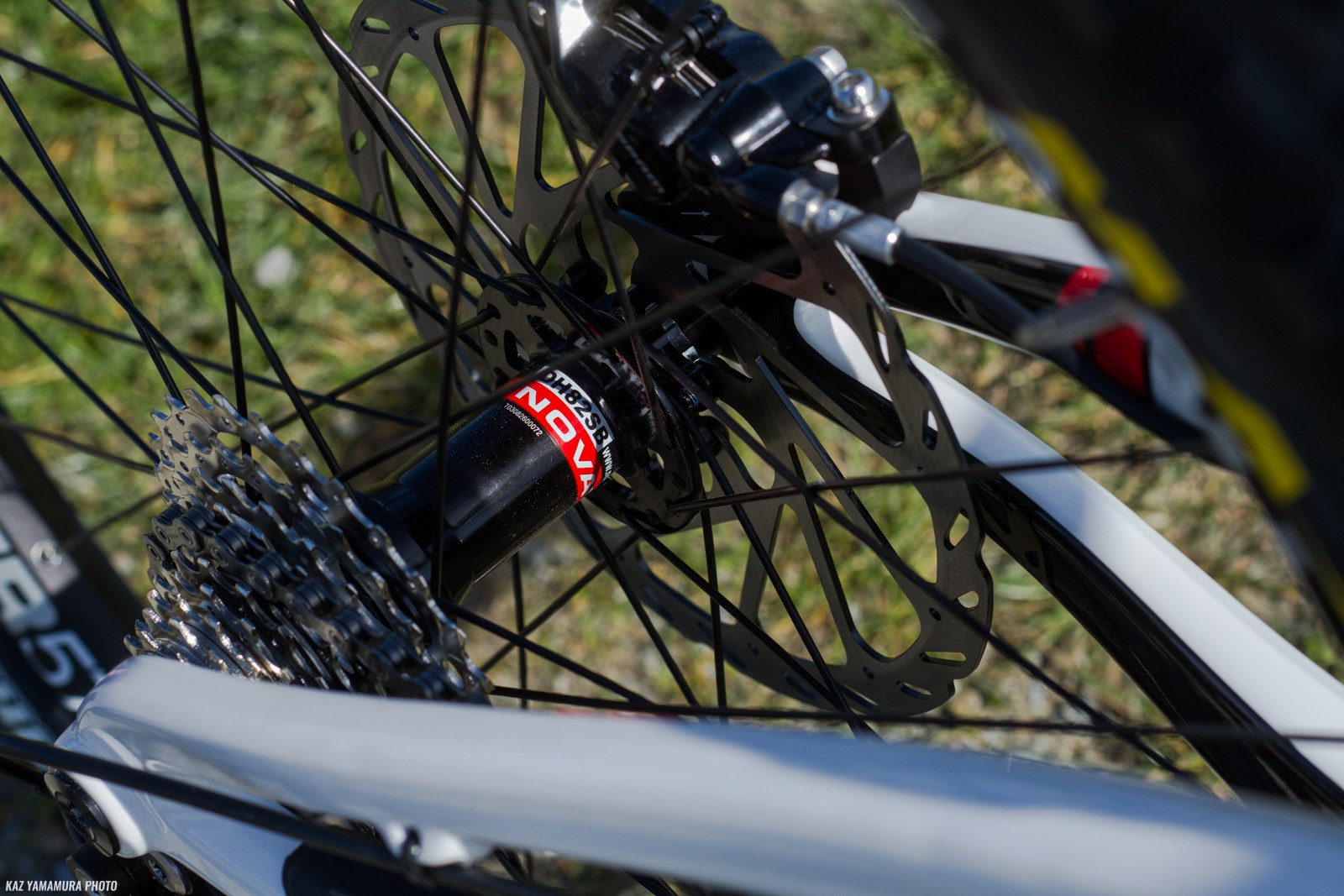 Novatec hubs (on the C shown here) save you a little cash over the DT Swiss 240s on the CC, but the Enve rims are the biggest dollar upgrade. 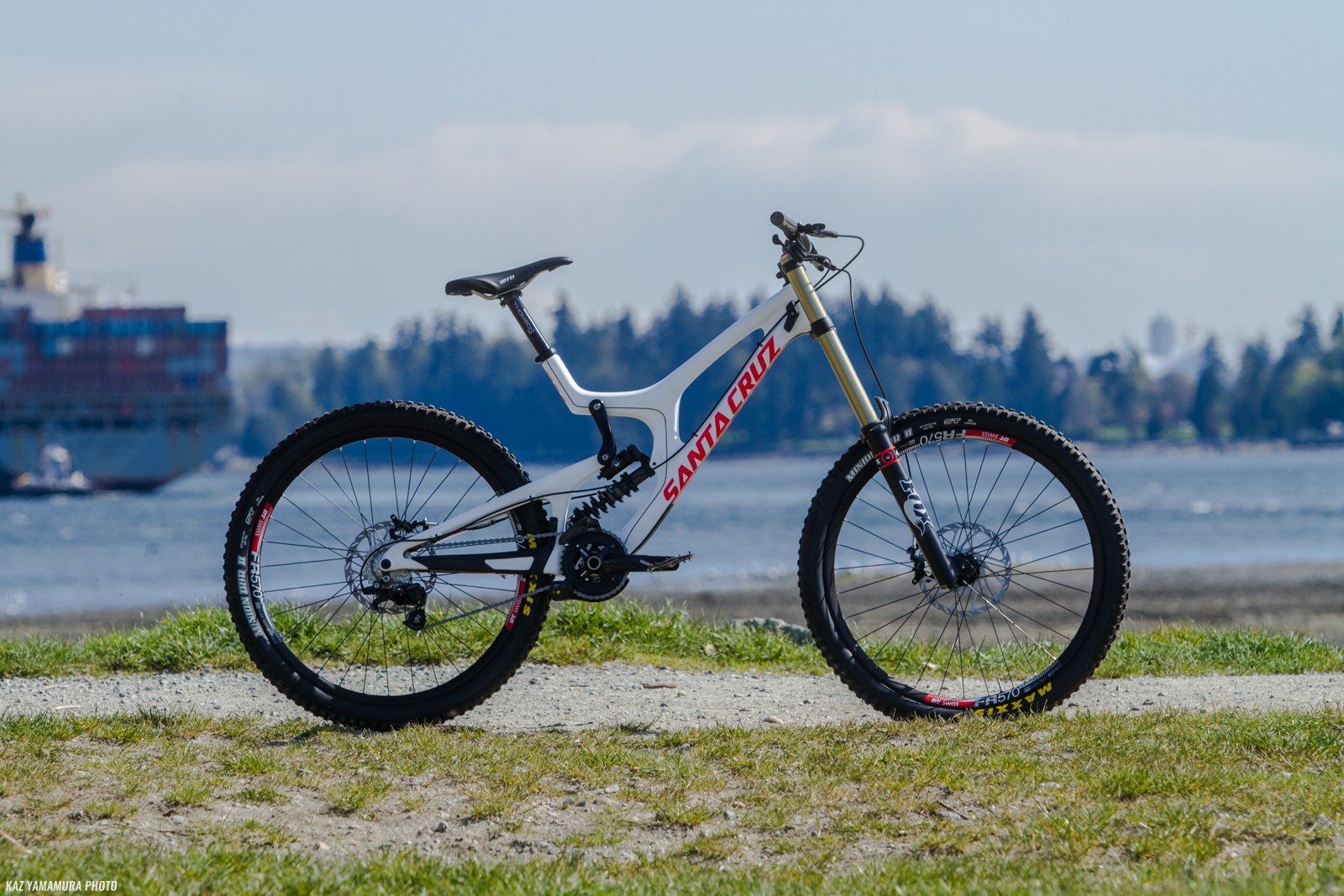 Both bikes have a high and a low setting, but there is no longer an option of swapping between 10″ and 8″ of travel. 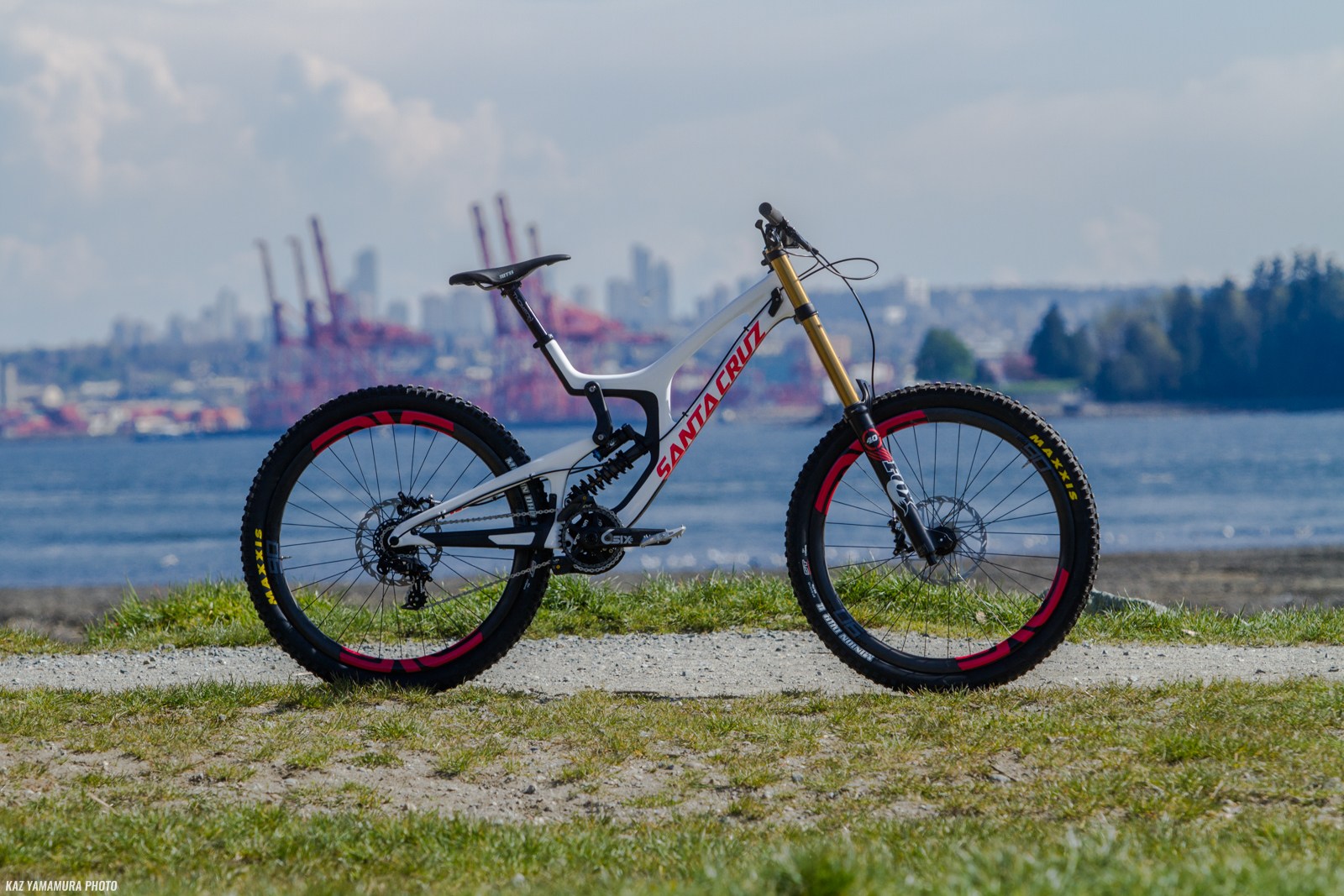 Both bikes come with Maxxis Minion DHR2 wire bead 27.5 x 2.4 tires. Ready to race out of the box. 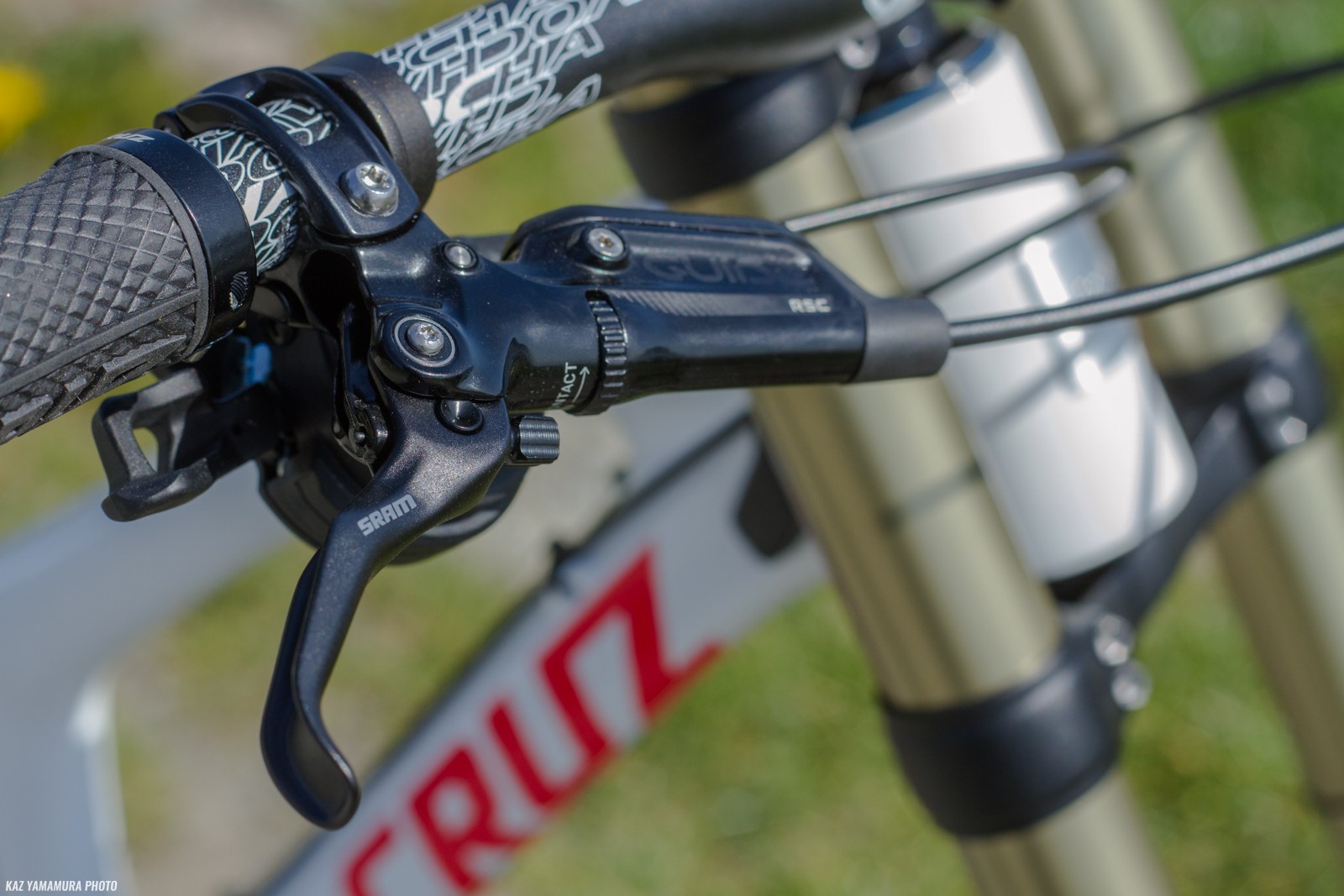 Another shared component spec is brakes. SRAM Guides on both bikes but the CC gets RSC while the C gets RS. Is that clear? One difference between the two is pad compound (organic on the RS and metallic on the RSC). We are splitting hairs on this one. Guides are good brakes no matter how many letters you get with them. 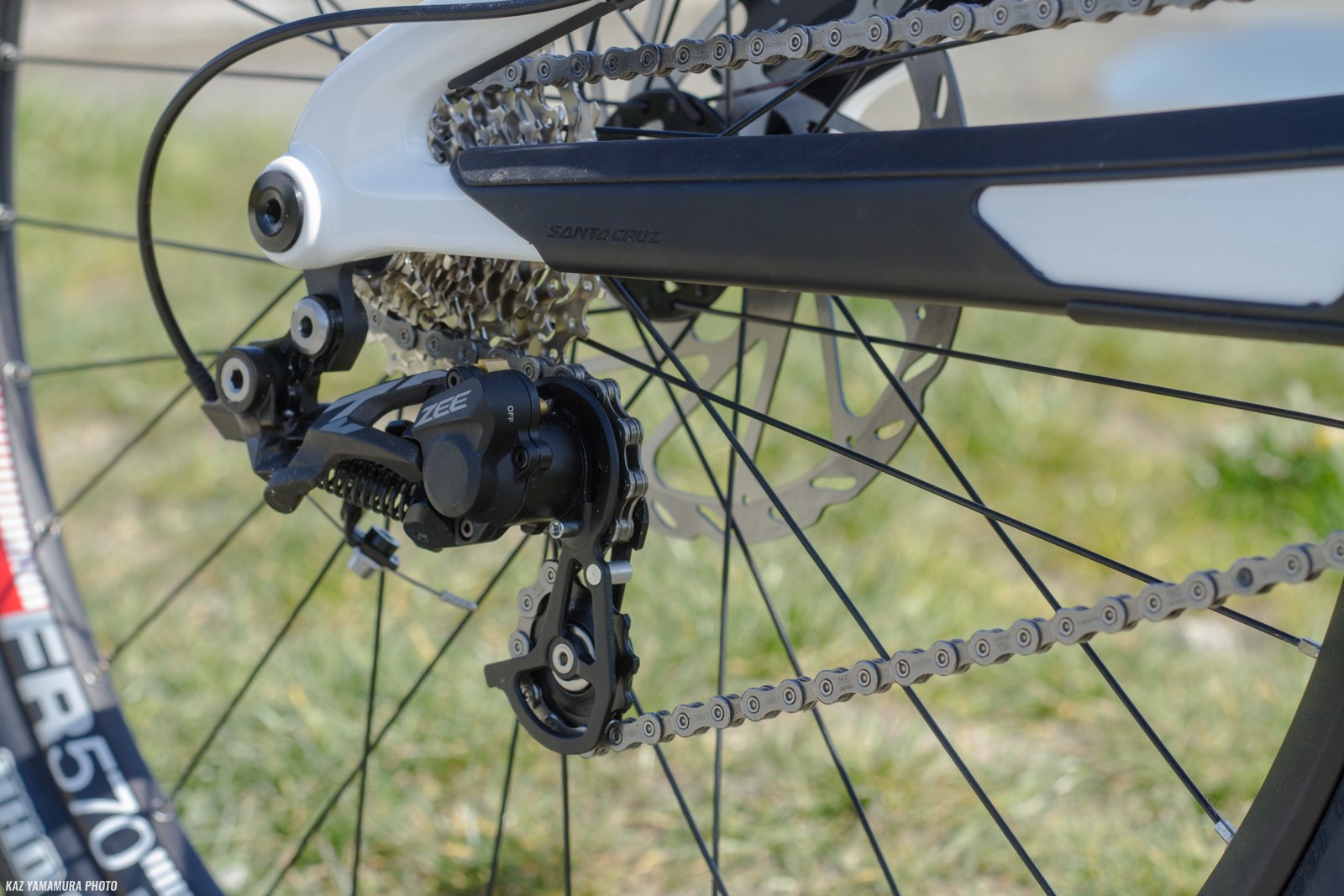 A Shimano Zee drivetrain on the C with an 11-28 10 spd cassette. The CC gets the SRAM XO1 treatment and a 7 spd cassette. 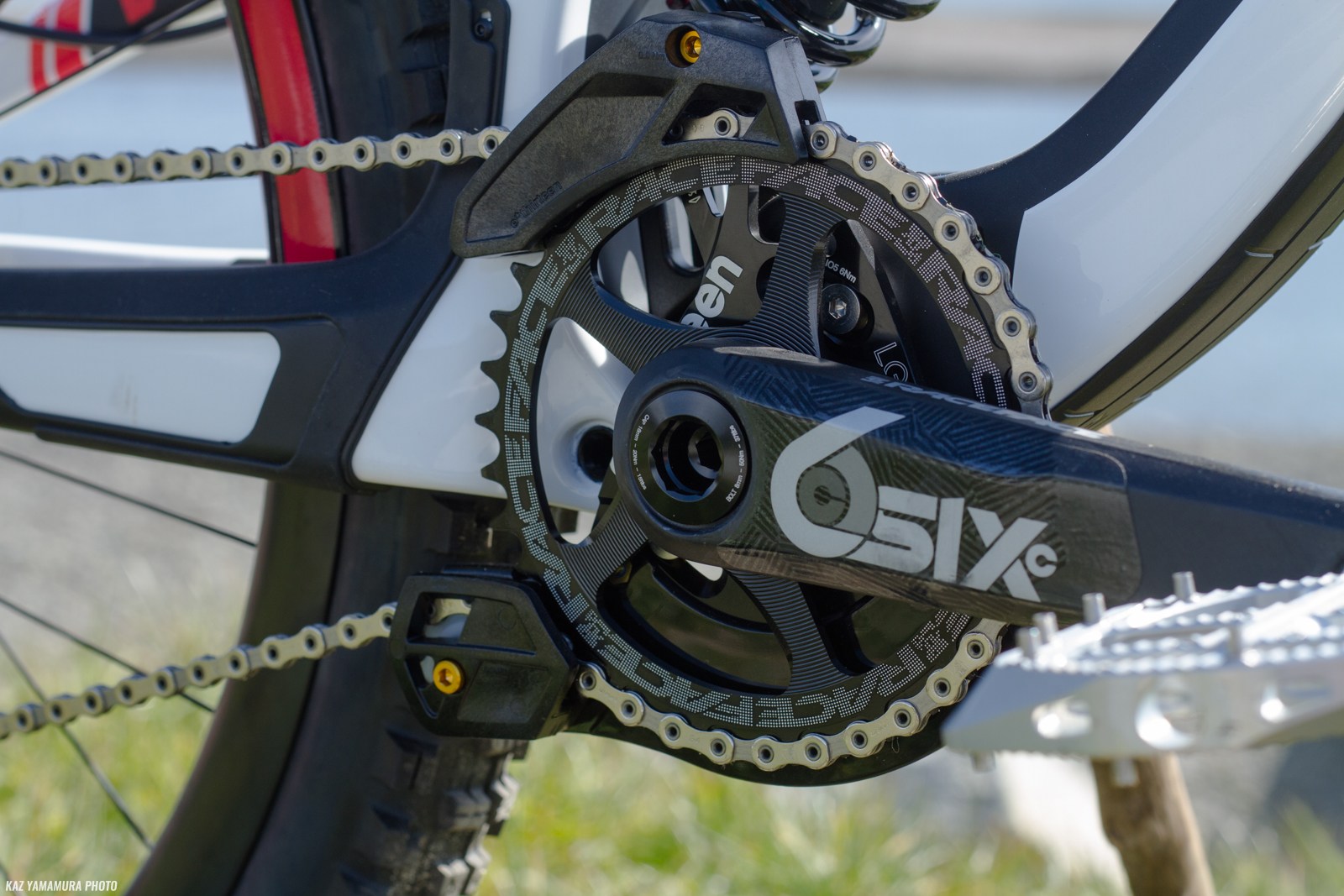 Raceface SIXc cranks are a serious upgrade for the CC, and one that will save a big chunk of weight. 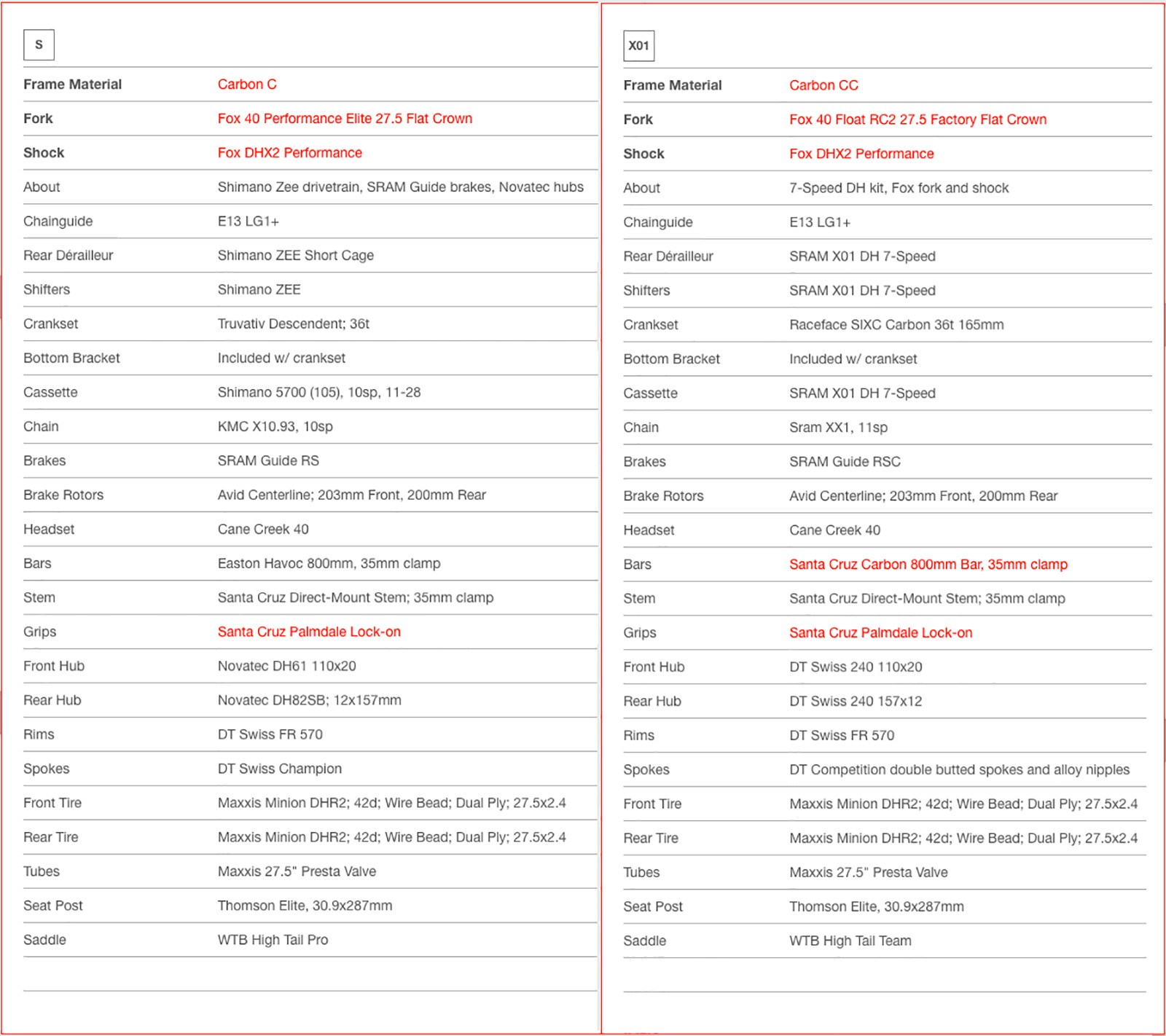 Full spec for both bikes. Note – the spec sheet above states the CC has a DHX2 Performance on the rear when it is in fact a DHX RC4.

Tim and Mike need to post a few more race results but we should have the full review from both riders in relatively short order.

Only the CC is available as a frame, starting at US$3599 with either a Fox or RockShox shock.

Would you prefer one of these completes or to build up something custom starting with a frame?

Is the C the lowest spec v10 available? Is still very expensive.

It looks like the CC has an RC4 shock (not RC2) in the pic. I presume its a typo in the table from SC listing the spec- would be strange if they didn't go top drawer for the shock on the CC.

X2 as of next week I believe

I'd go custom but the Loonie is exactly that; Looney! Prices are in the stratosphere to begin with then add in the exchange. I know these frames making Biking Jesus cry, but No Bueno!