A Day with the Canfield Brothers

Those of us that live in the Pac NW know how awesome it is here. We have a diversity of trails and terrain within a short drive that is beyond compare. From the damp twisted roots of the North Shore to the open, flowy and dusty trails of the Okanagan, as mountain bikers we are a lucky bunch. 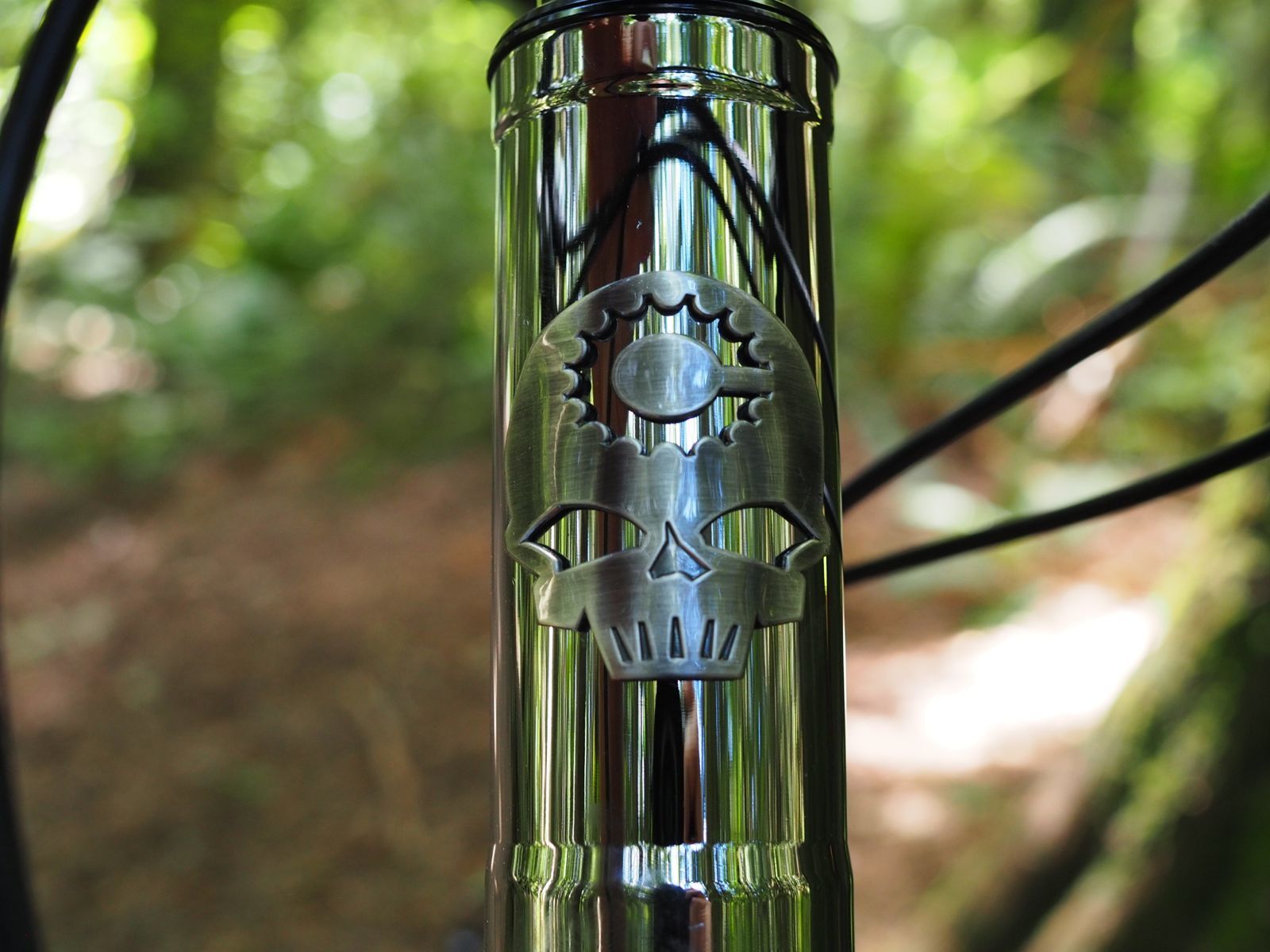 Who’s new in the neighbourhood?

All of that attracts companies in the bike industry to set up shop here, for some obvious and not so obvious reasons. Vancouver has always been a hub with Race Face, Rocky Mountain, Kona and Norco being notable large local companies with a good number of smaller outfits such as Knolly, Blackspire, Banshee and others. Bellingham is another developing hub for the mountain bike industry with Transition based there, Kona’s US office and now Canfield Brothers.

Canfield Brothers have traditionally had ties with Utah and so the move from the dry arid slick rock trails to the damp loam of the Pacific Northwest was a big one. I decided to swing by the new digs and see what stimulated the move and check out some of their rides. 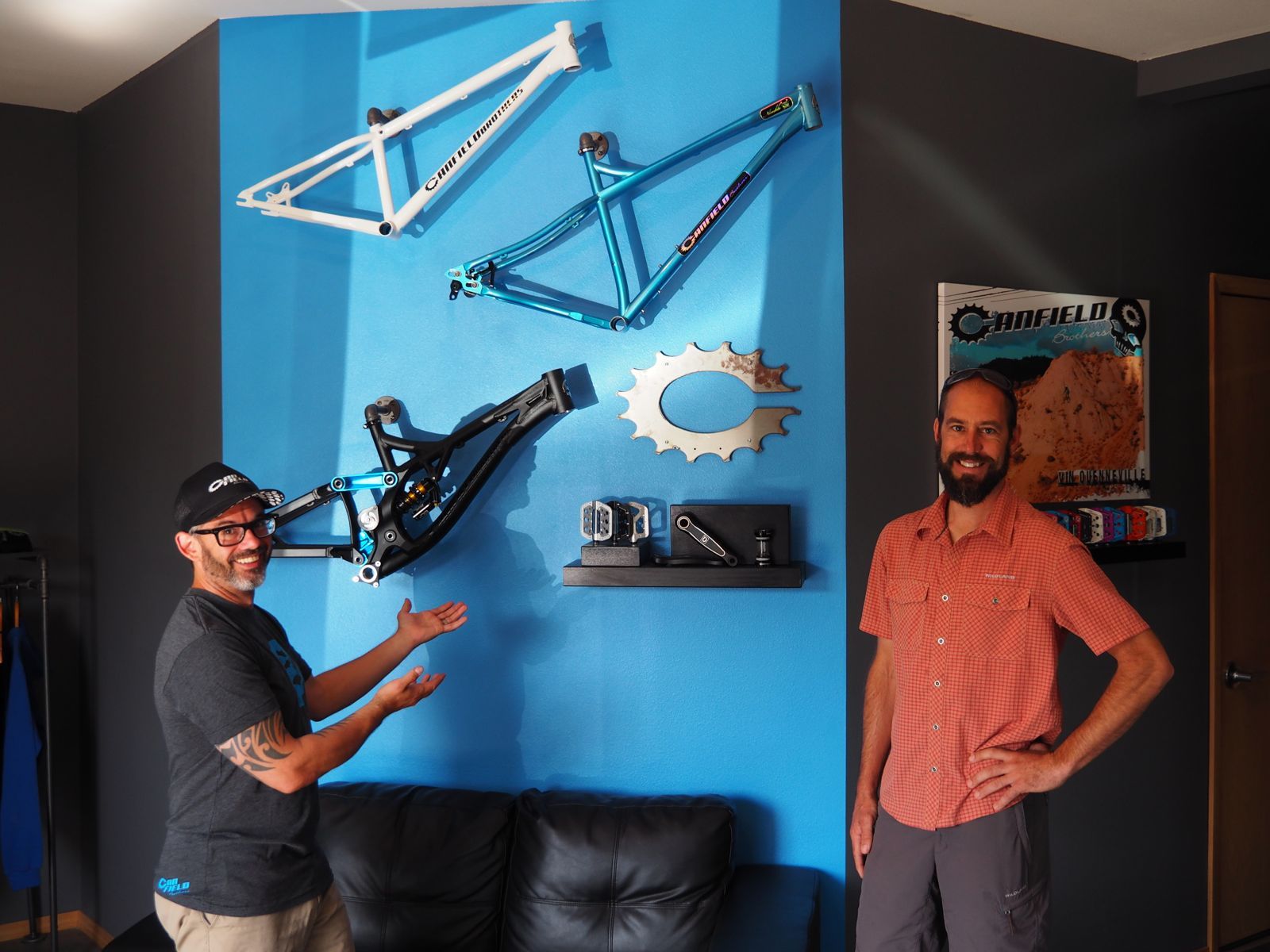 Vin (left) and Lance (right) showing off some of the Canfield goods.

The Canfield brothers, Chris and Lance, started up their bike company 15 years ago in 1999. The brothers were fully into racing downhill at the time and, when bikes weren’t lasting under them, they decided to build their own. Other riders and friends saw these bikes wanted a piece of the action so a few more frames were built and sold and a bike company was born. This part of the story isn’t unlike many other companies, the difference with the Canfields was what they were breaking their bikes on. These guys were pulling off Rampage style drops before the event existed. 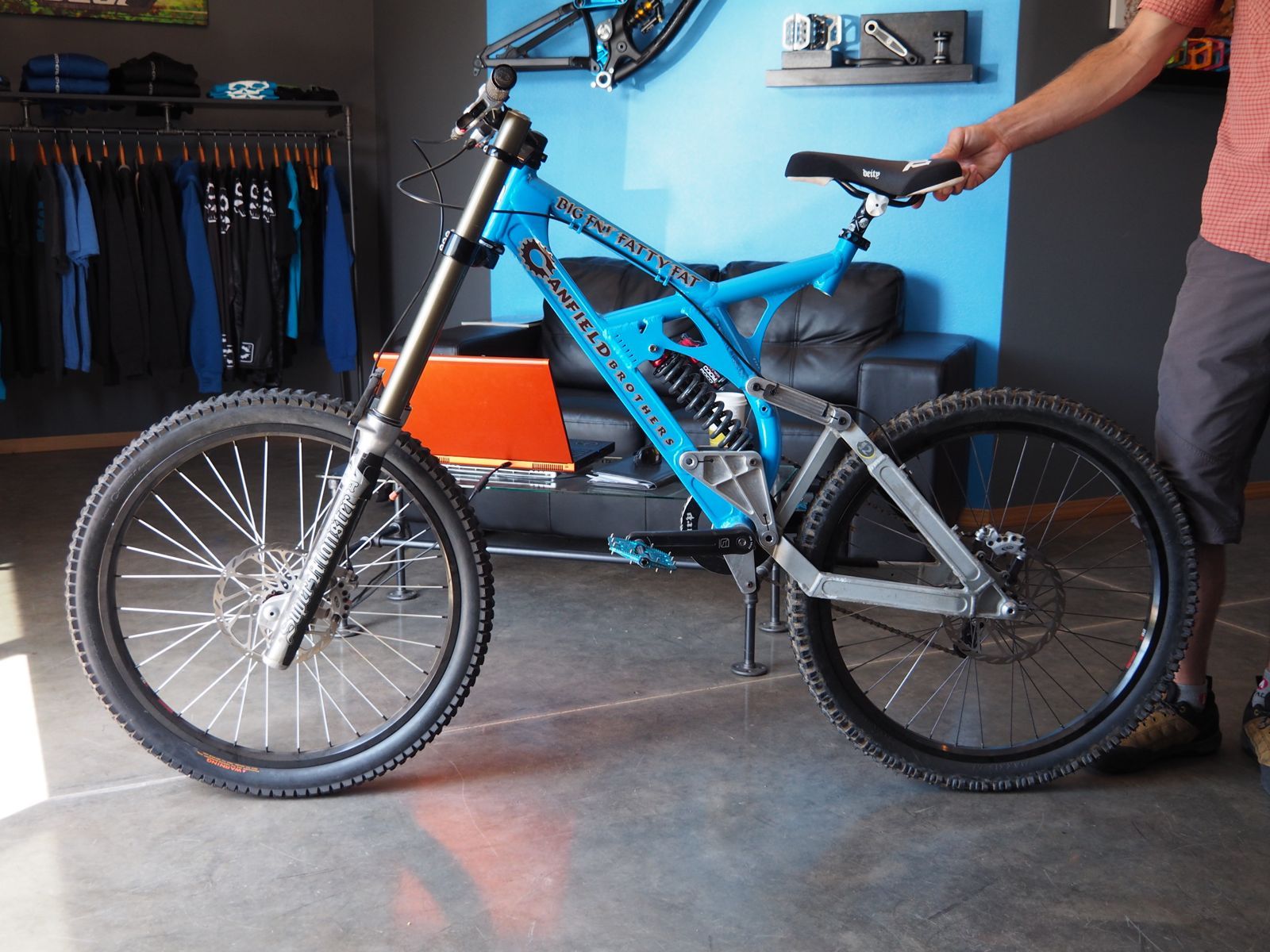 There are some Canfield artifacts hidden upstairs.

Working out of a basement at their parents’, house, Chris and Lance went from cutting tubes to be welded by a friend to having their designs built for them offshore. As the brothers’ riding progressed and changed so did the bikes and today’s range reflects the ends of the spectrum that the Canfield crew like to ride. From the Jedi, a race inspired downhill sled, to the Nimble Nine, a 29er hardtail built to shred, the guys at Canfield have most bases covered.

They are even building kids’ frames with the notoriously talented Jackson Goldstone now on the Canfield team. “That project started about 2 years ago” explains Lance. “We were at the Decline forum in Whistler and there was a big discussion about the lack of quality kids bikes, so we decided to build one”. And it seems from the glimmer in Vin’s eye that Canfield has some more bikes up their sleeves. “I can’t talk about them right now” says Vin, “but they are going to blow minds.” 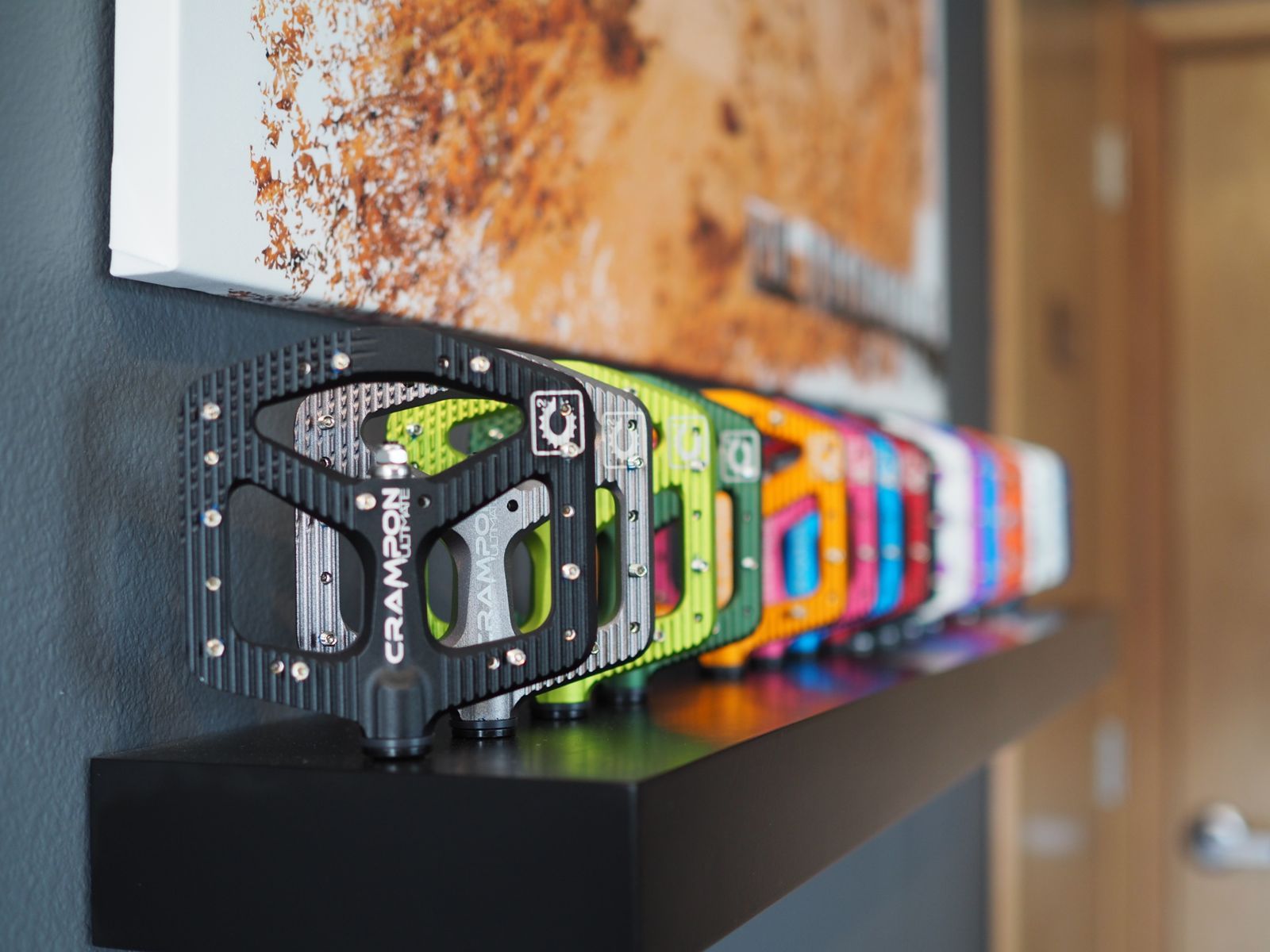 It’s not just bikes, Canfield has a selection of components too including this rainbow of Crampon pedals.

The move to Bellingham came together due to a couple of factors, the first was that Canfield Brothers is a company looking to grow but not too much; just enough. For that to happen Chris and Lance needed to bring on some passionate colleagues to help run the company and those guys are Sean and Vin. It was Vin that was the big catalyst for the move to Bellingham. Vin has been a long time Canfield rider, buying his first frame back in 2006 and the friendship grew from there. After a trip to Whistler in 2007 he discovered his “own personal Disneyland” and began plotting his migration.

Bellingham seems to be a good fit for the company with Whistler about 3 hours away and an awesome network of trails just a short ride away. For Canfield being part of the riding community in the Pacific Northwest is part of the growth plan. “We can ride all year around here,” Vin explains, “plus the access to Whistler and the exposure that having your bikes and components ridden there gets you internationally is super valuable”.

I wanted to jump on a couple of their bikes for a ride and first up I got on the Nimble Nine. 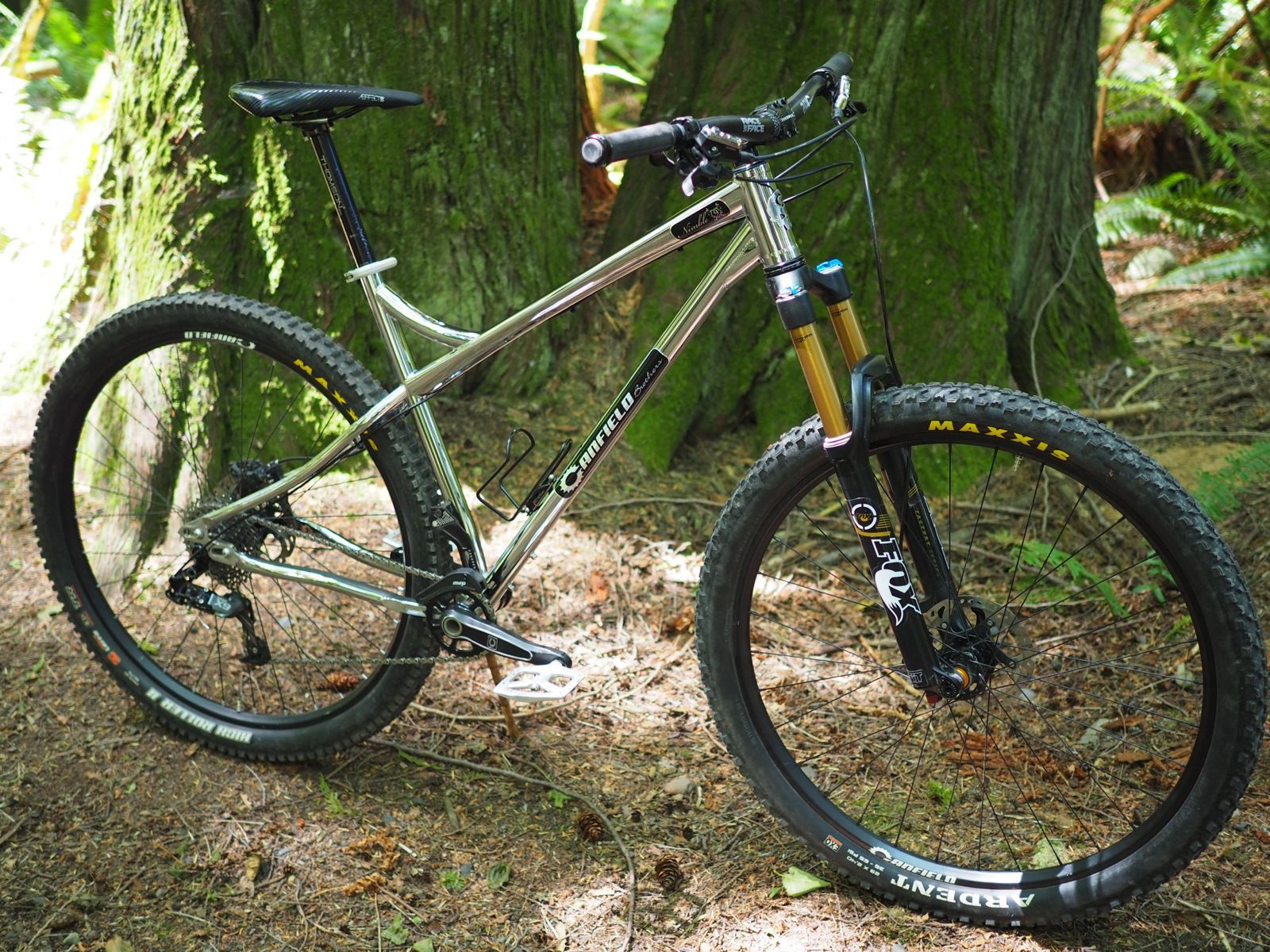 The Nimble Nine is all its sparkling chrome glory.

What bike do you ride when a chair lift can’t take you to all the heinous lines and you want to go for a mellow (or not so) rip? For the Canfield crew on days like that they wanted a 29er hardtail to go and rally. The Nimble Nine is the outcome and the specs certainly shout playful. 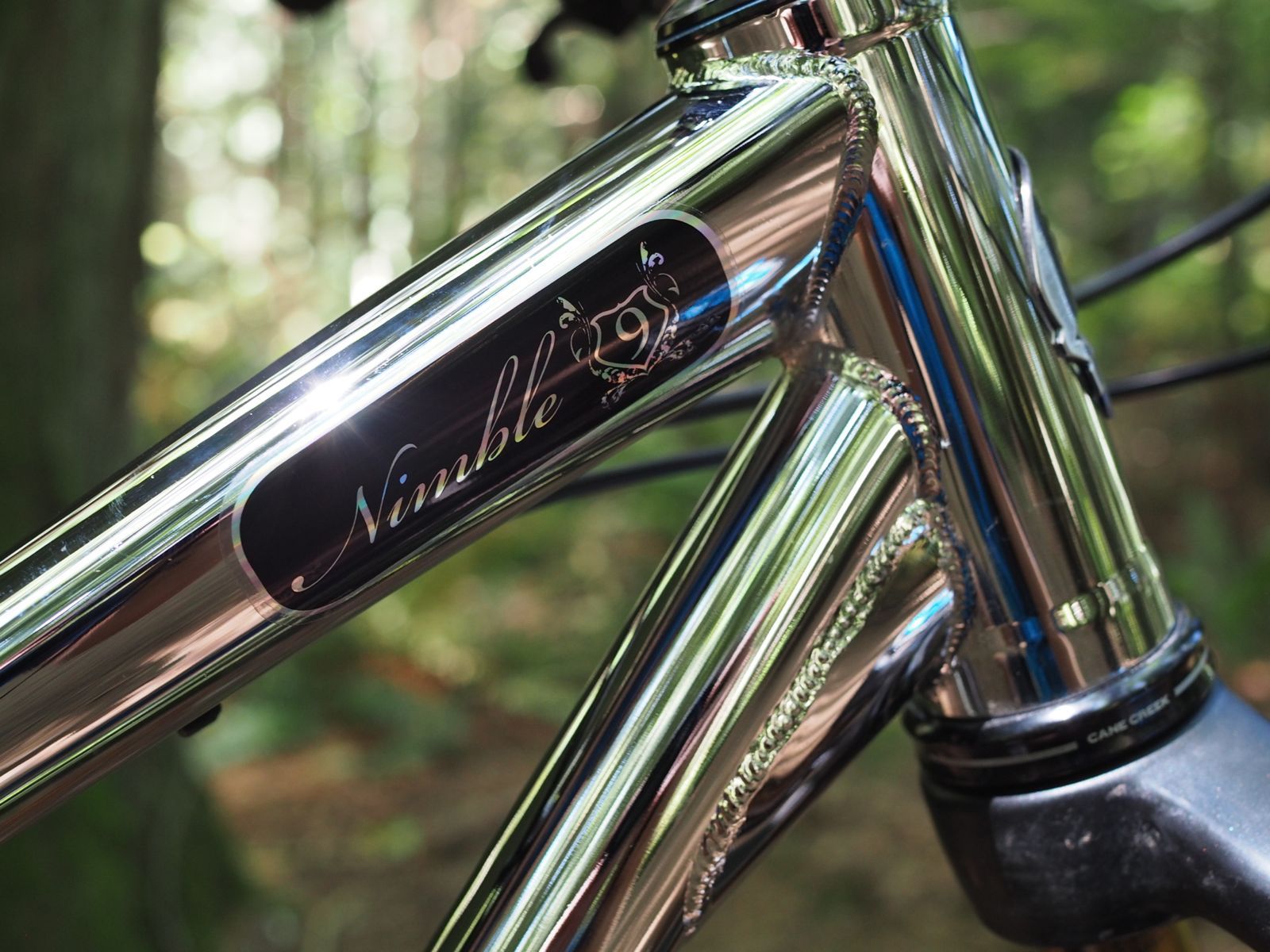 Sensible headtube gussets and reinforcement and a close up of that chrome finish.

The Nimble is built with 4130 chromoly and features a slack 68 degree headangle when built with a 120mm travel fork. The biggest feature of this bike is the rear chainstays, being adjustable between 16.25” (damned short for a 29er) and 16.9”. This tucks the rear wheel up under you as tight as possible and makes for a distinct ride. 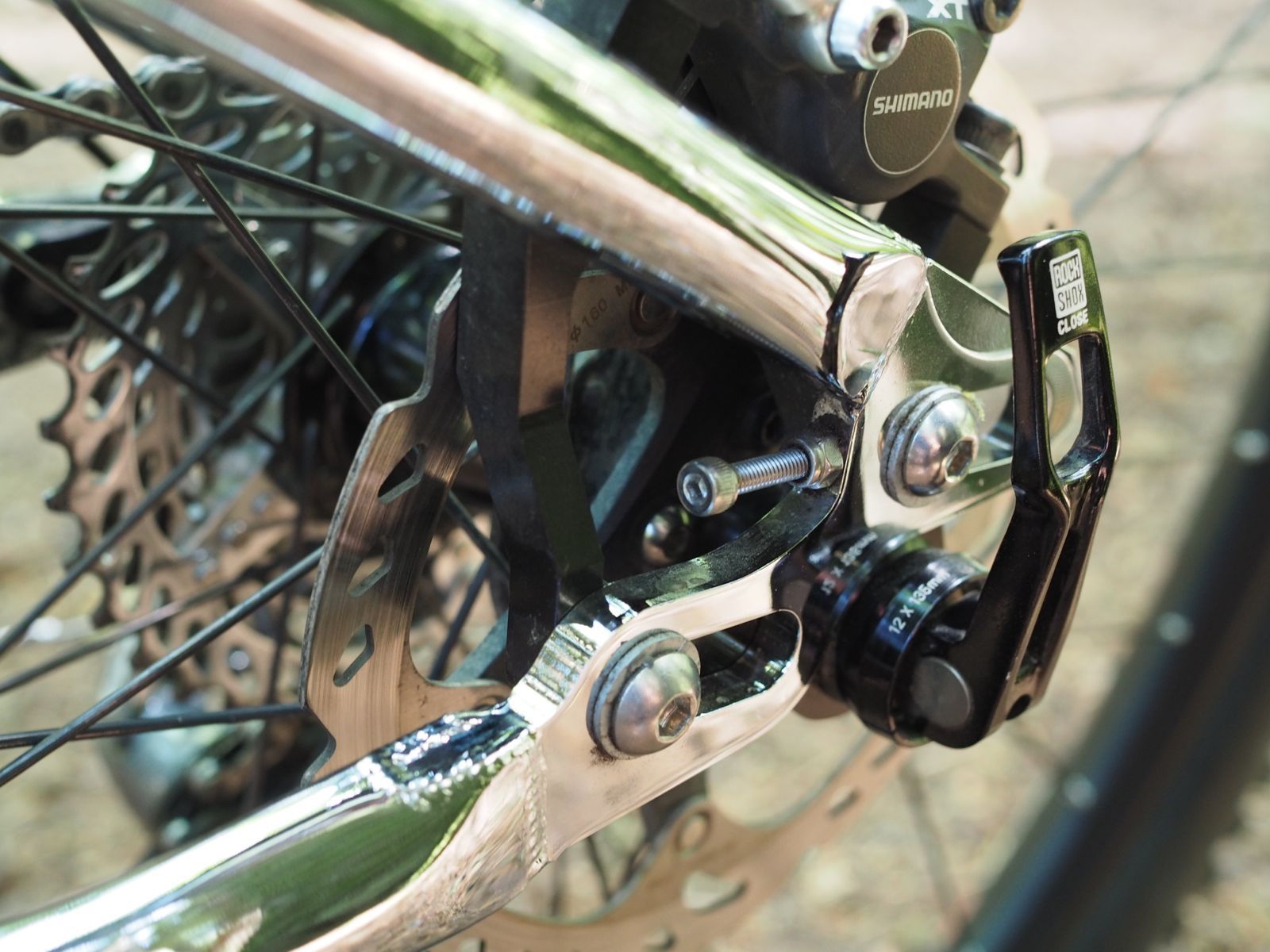 Those sliding dropouts allow the chain stay length to go from 16.9″ to a short 16.25″. The brake calliper is mounted on the dropout for easy alignment.

The bike I got to ride was finished in awesome chrome plate and was dripping with Canfield components from their wheels to the cranks. The sliding dropouts are an obvious feature on the frame with the brake caliper mounted to the dropout to ensure proper alignment. Add to that a skull headbadge on the 44mm headtube (taper steerer compatible) and some trick looking gussets and the frame looks ready to rip. 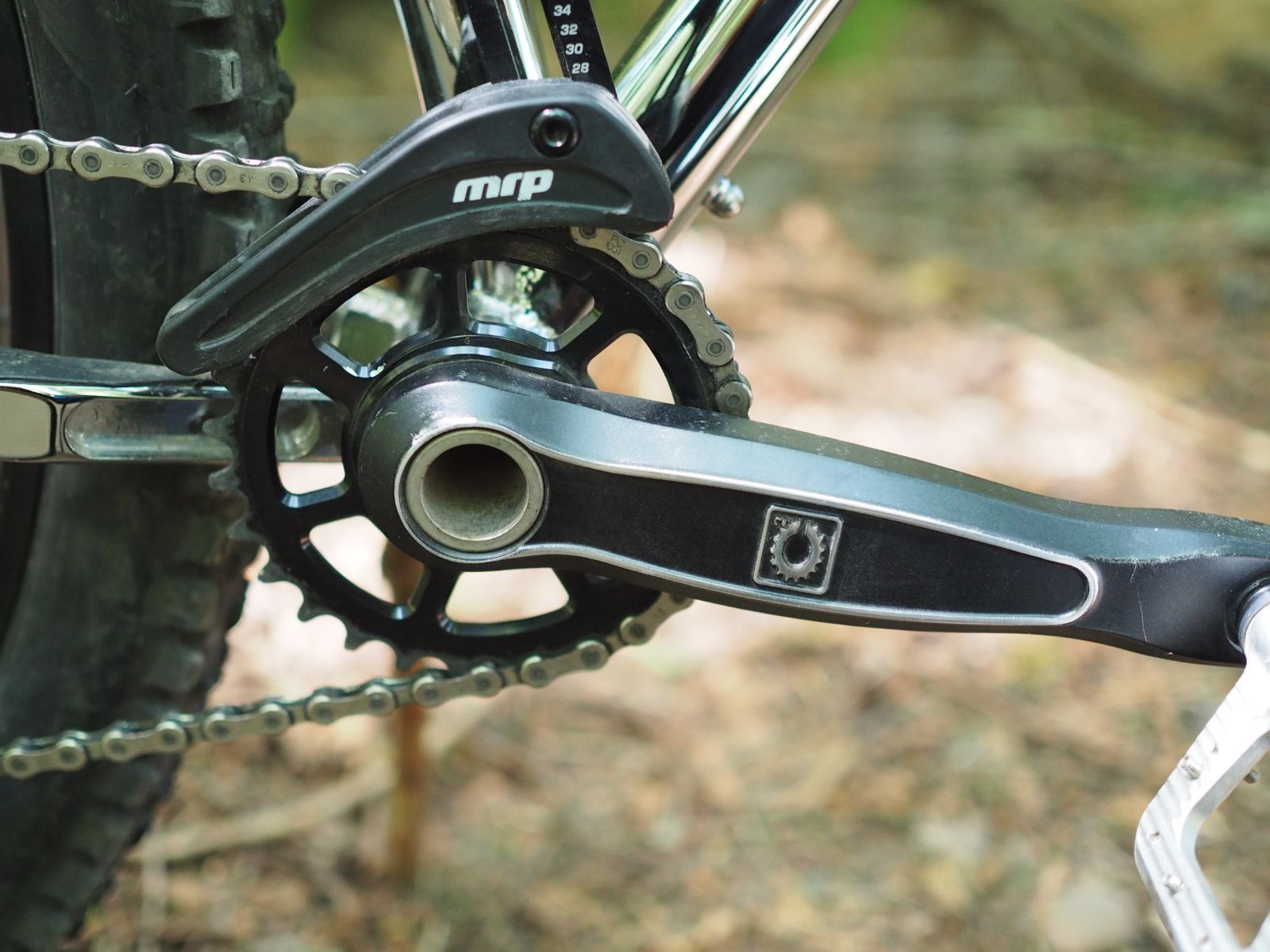 C2 Cranks and direct mount chainring add some individual flair to the drivetrain. 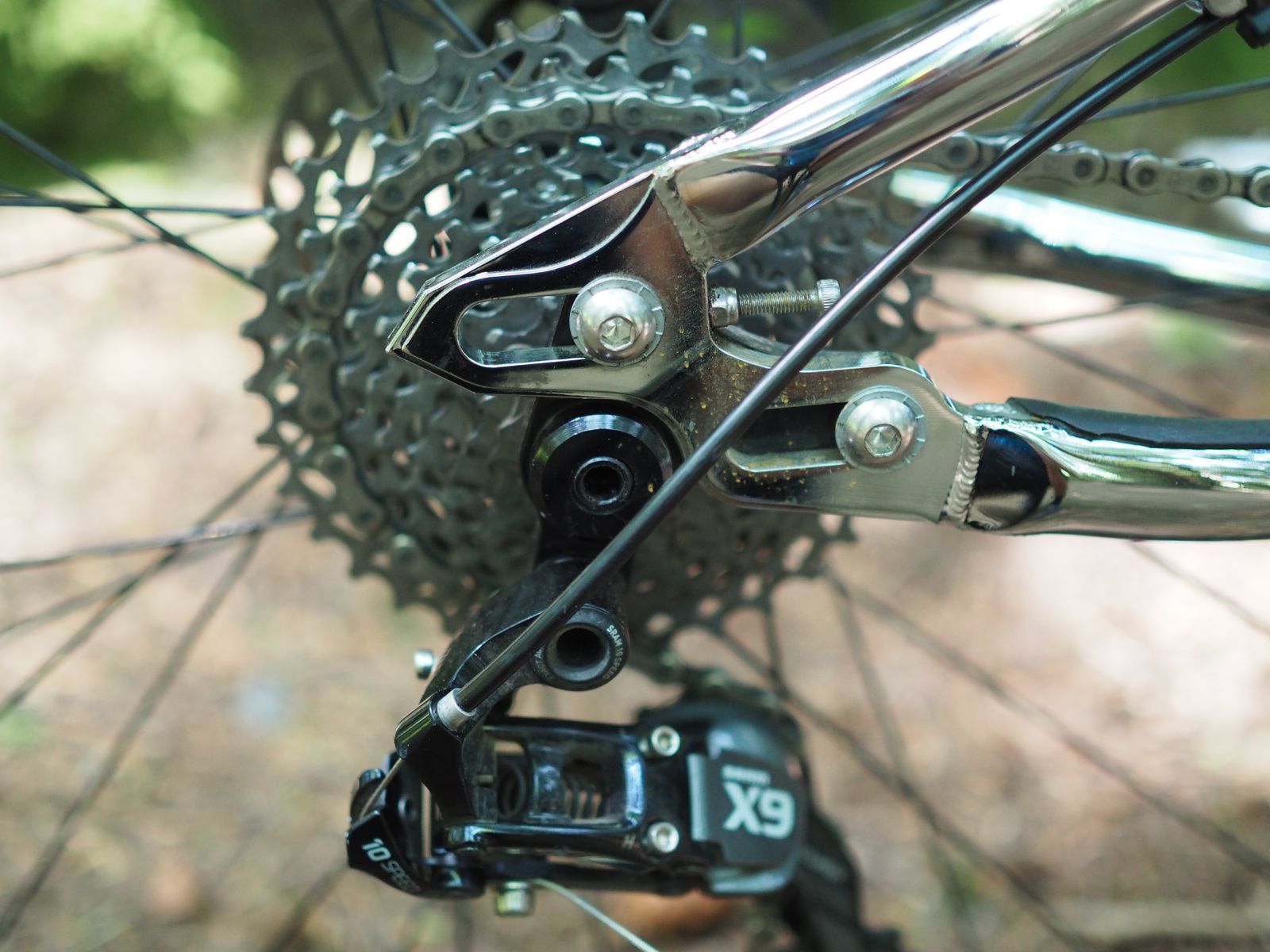 The drive side view of the sliding dropouts.

Then you throw the bike into a corner… and again those short rear stays come into play to make the bike feel really responsive. And yet, combined with the slack head angle, stable at the same time. How does that make sense you say? Well as you come into the corner with your weight forward, the slack head angle helps the bike stay stable, stopping you from feeling too much over the front. As you enter the corner and start to transfer the weight back and turn with the hips the bike wants to whip around and out of the turn. It was so distinct that on numerous occasions I left the turn in a manual without meaning to, leaving me with a big grin on my face. 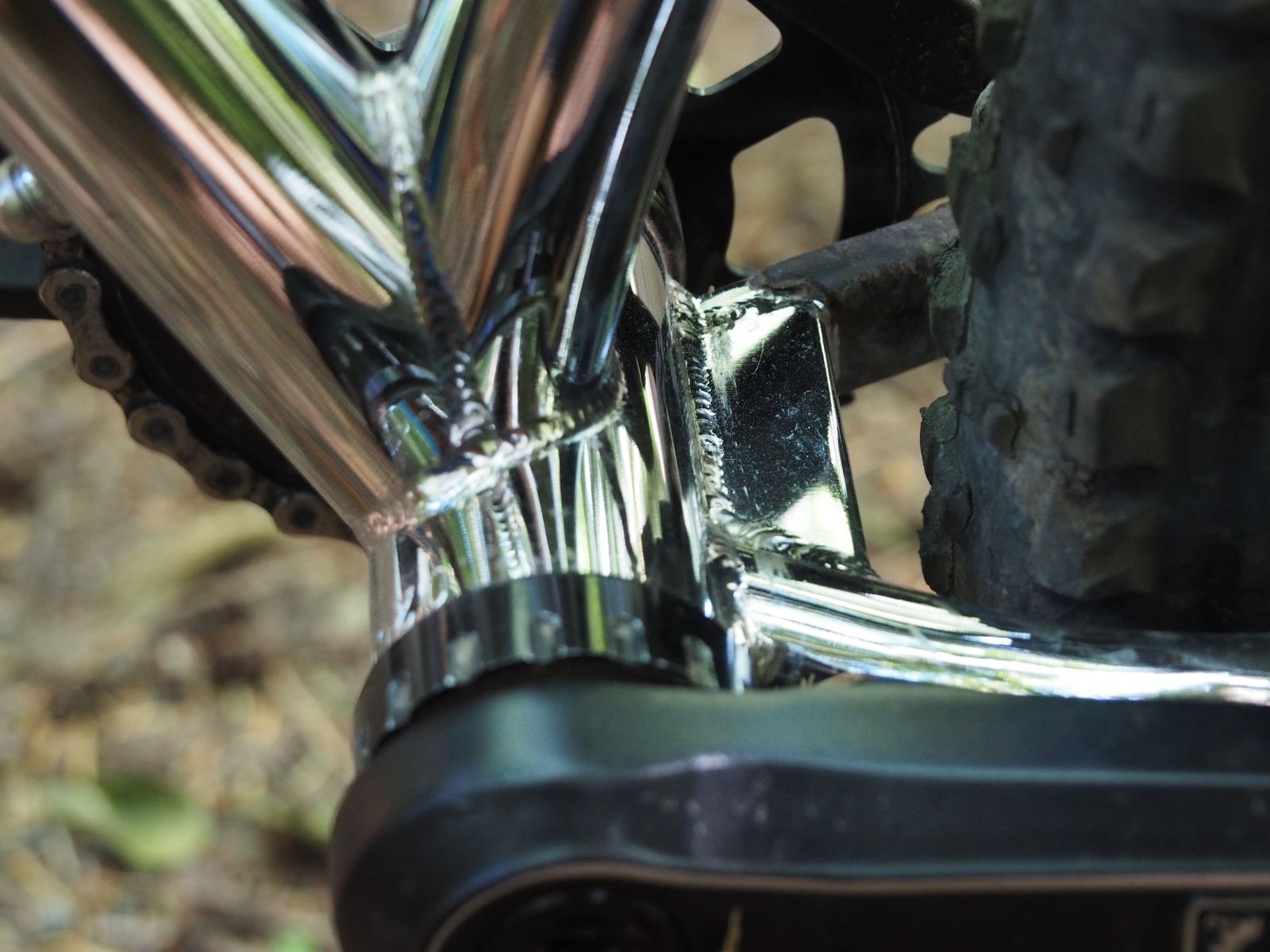 Little details like this chainstay gusset point to this being a well thought out frame.

There are still those that feel that 29” wheels can’t be on a bike considered to be playful, but the Nimble Nine is definitely a bike to silence those doubters. If you are looking for that second bike for the stable I would recommend taking a look at the Nimble Nine.

The Balance is another big bike for the brand and the full release of that bike comes in September. We got a sneak peak of the bike back at Sea Otter and liked what we saw. Look for ride impressions on this bike with more details soon.

Welcome to the neighbourhood Canfield!

This editor read infamous as tongue in cheek.

Infamous: 1) having an extremely bad reputation, 2) deserving of or causing an evil reputation; shamefully malign; detestable. Jackson Goldstone is just a kid, and a very nice one at that. I assume the author isn't calling Jackson evil, he just doesn't know what infamous means. Hey NSMB, do you need a remote editor? I know one.

My bad… Jackson is a very good kid and he loves riding that bike. So how does notoriously talented work for you? I think that's a better way of putting it. If I could shred a bike now like he does as his tender age….

I should have also noted how those dropouts make single speed conversions a breeze but my knees started weeping as I started to write that.

Try "very talented"…simple and to the point.