A local company, Anaconda Systems Inc, has petitioned the Crown for access to 2.6 hectares of land at the second switchback on Mount Seymour. Based on the diagram provided by the company the facility could block the entrances to TNT/Cabin trails and prevent riders from exiting CBC trail, both popular routes for mountain bikers who ride Seymour.

Waste that is currently transported off the North Shore for processing (approx 60 kms round trip to Harvest Power in Richmond) would be dealt with on the site. Vehicles would travel the often busy Mount Seymour road daily to deposit waste.

At this point everything accessed from the Mount Seymour road is focussed on outdoor recreation. There is a popular ski hill that provides access to the backcountry for adventurous types and the area is popular with snowshoers, hikers and of course some of the best mountain bike trails in the world. There is a patchwork of landowners on Seymour but the largest area is a 3500 hectare Provincial Park. The land Anaconda would like to rent from the government is Crown owned and would be subject to a fee based on approximately 15% of the assessed land value per year. It's unclear at this time if the land is part of the Canadian Mortgage and Housing property (CMHC) which became contentious last year when it was briefly closed to recreational users. 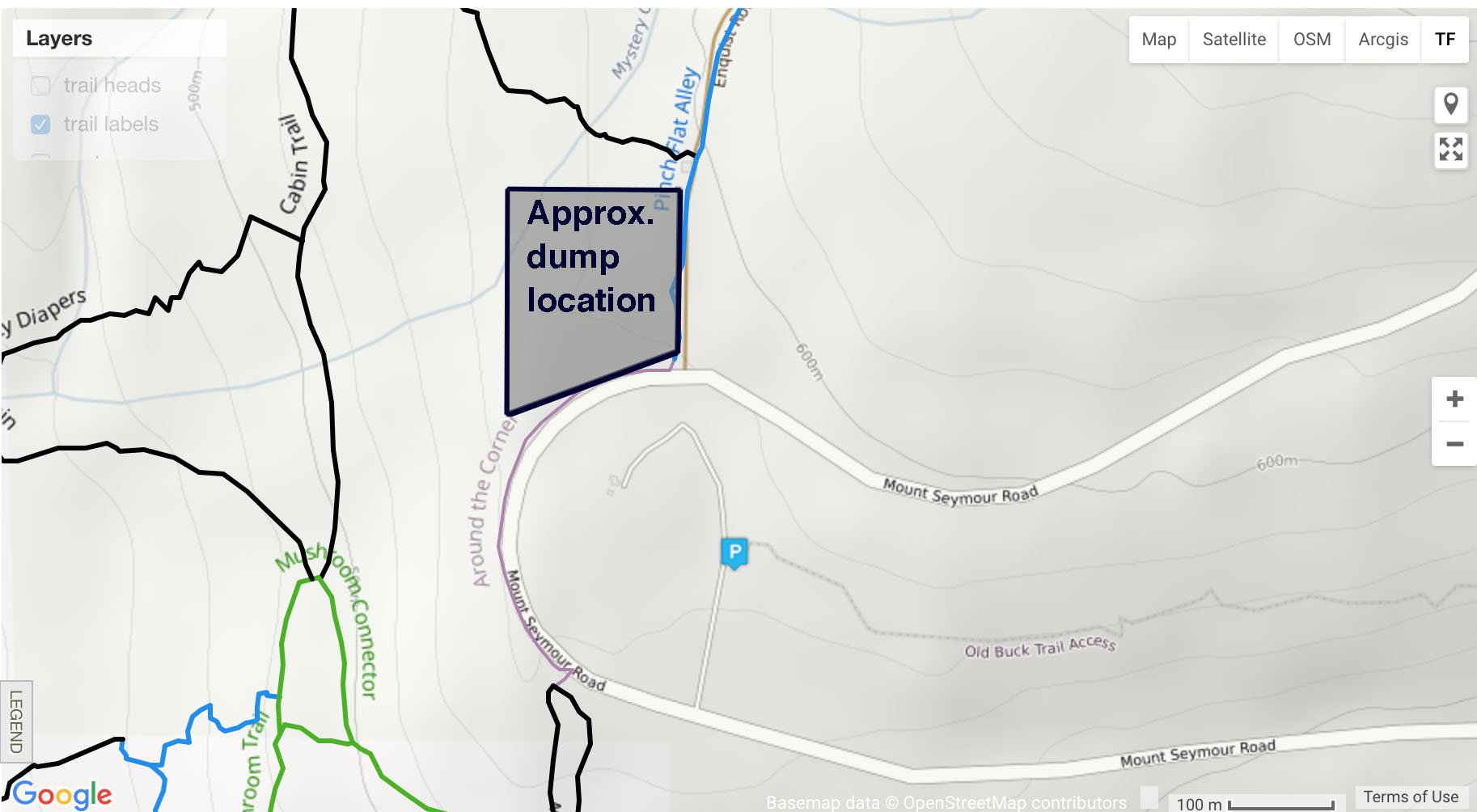 This is an approximation of the map that was provided to media by Anaconda superimposed on a Trailforks map of Mount Seymour trails. It's not clear if Pinch Flat Alley - an access trail leading to and from two popular trails, would be affected by the development.

This facility isn't likely to be a wee hobbit shack producing garden compost, and the company plans to modify the land extensively for their use; "Before any of the facility components can be delivered to the site, the area will need to be cleared, levelled, excavated, stabilized, and paved." That's the entire 2.63 hectares. After that various facilities, buildings and equipment would be brought in and built on the site if necessary. 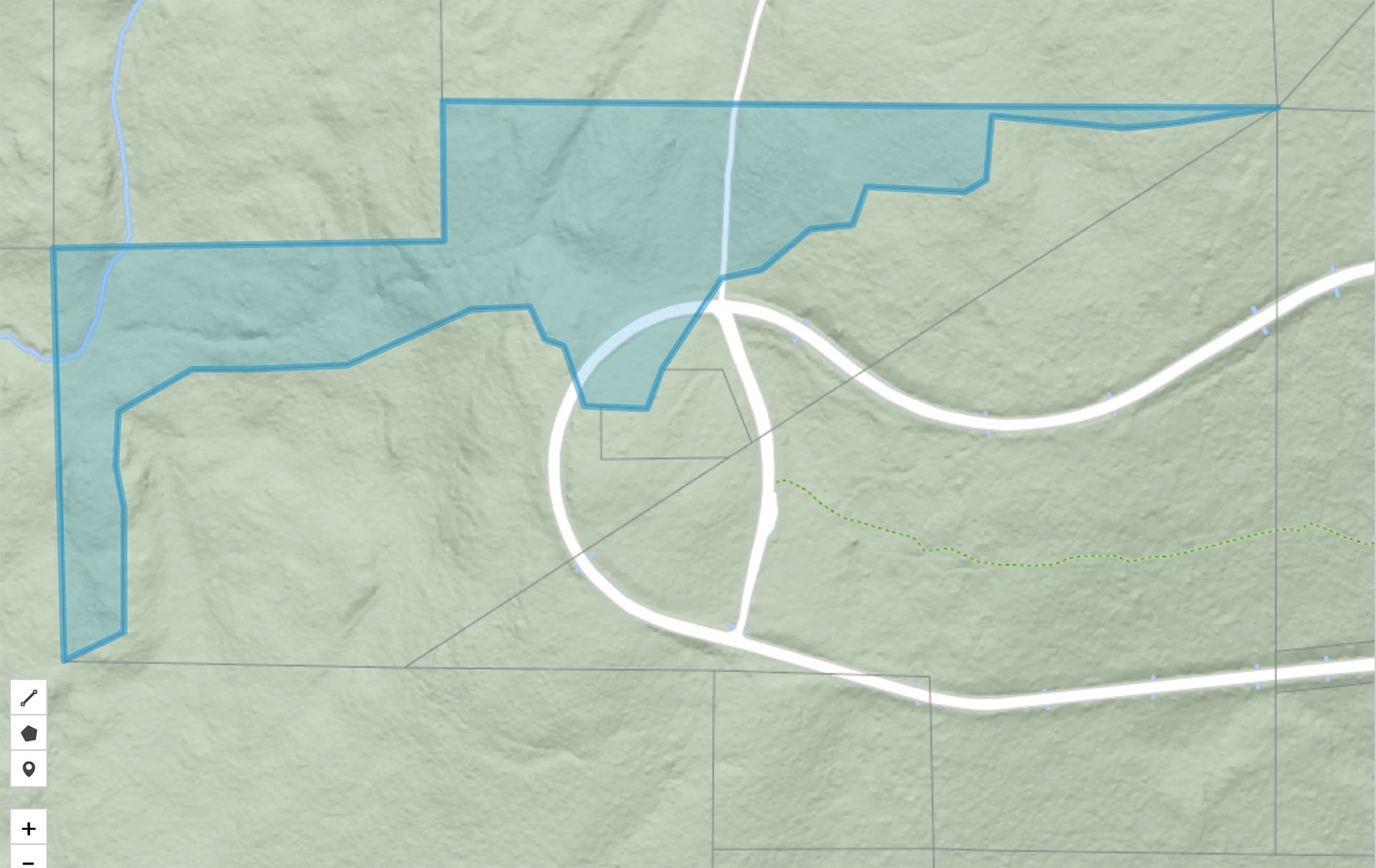 Most maps show different ownership boundaries for this area of the mountain for some reason. This depiction is from the North Vancouver District's Geoweb system and it names the owner simply as "Provincial."

If you think this proposal is a little strange you aren't alone. Why deal with waste half way up mountain within an intact forest? Does it make sense to drive heavy disposal trucks up a treacherous road all year, particularly one that is often choked with traffic battling to get to the ski hill?

One source I spoke to, who wished to remain nameless, speculated that this was gamesmanship by the Provincial Government. Apparently the Province has been trying to get the District of North Van to commit land to build non-market housing, but the District apparently contends they have no available land. It's possible the Province is angling for some leverage on the District. While this is purely speculation, my information came from a knowledgeable source.

What we know for sure is that at this point your voice can be heard. I personally don't think Mount Seymour should begin any slide toward industrialization. Wilderness is a at a premium, particularly wild areas so close to a metropolitan area. And once these areas are used for industrial applications others are sure to follow suit. My opinion is that this is a ridiculous location for a waste disposal site. Leave Mount Seymour for recreation and put industrial operations on industrial lands.

At this point your voice can be heard about this issue - until November 23rd. If you'd like to stand up for natural areas and mountain bike trails, please submit a comment about this development here...

What would Monica say? Are there any frogs in that area?

Someone should ask her. I bet there are!

Frog lady save us.

I like how anyone against mtn biking repetitively talks about the destruction to natural habitats, but when mountains gets razed (Cypress) or plans to build a compost dump on a mountain are brought forward, crickets.

DNV Council and the local MLA aren't into the idea.

That's good to hear.  I agree that it is crazy how it could even get that far.  There must be better sites to consider.

From reading about the technology involved - and the proximity of their other site to residential properties - I think if the City/District were forward thinking re. local job retention & creation this would be a prime candidate to test joint light industrial/commercial/residential zoning.

We’re losing light industrial land and the jobs that go with it to build residential density but the auto garages, muffler shops, fab shops, drainage outfits, gyms, cabinet makers and suspension shops (just thinking of Hunter St) need to go somewhere. Not to mention places like Bridge Brewing that potentially have a move coming sooner than later.

Venting and noise cancellation are obvious challenges but I for one don’t want to lose Forest space or jobs and I can’t think of a better solution to keeping both.

I hope they have an effective plan to deal with the inevitable increase in bear and wildlife encounters that will come from literally miles around due to the smell of piles of fragrant decomposing food waste.

If Richmond residents can smell Harvest Power a few km's away on a 'bad day, imagine how many bears this facility could attract.

I won't even begin to guess the inevitable increase in wildlife-people encounters on nearby trails and the local shitheads will have some competition for breaking into cars in the Mushroom lot, but not

I honestly dont see it happening. Fuel cost to get trucks to the top, wear and tear on brakes and snow. Trucks having to chain up in the winter to get to the site means extra labour costs. None of which makes sence with large trucks. I doubt the site would pass a enviormental assement due to leakage from the break down of the compost.