Chumba is a brand that’s not been on my radar for a good many years. I used to pine after their dh rigs – the Zulu and the F4 – back in the early aughts when Shaums March was shredding on the local race scene. Their presence in more recent years has been fairly nonexistent but the company has just been rebirthed in Texas with a refreshed ‘Made in America’ ethos. To start, they’re launching a lineup of steel hardtails, consisting of a 29’er (Stella), a ‘mid fat’ 29’er (Ursa), a full fat bike (Ursa Major), and what we have here, a 650b trail bike called the Rastro. 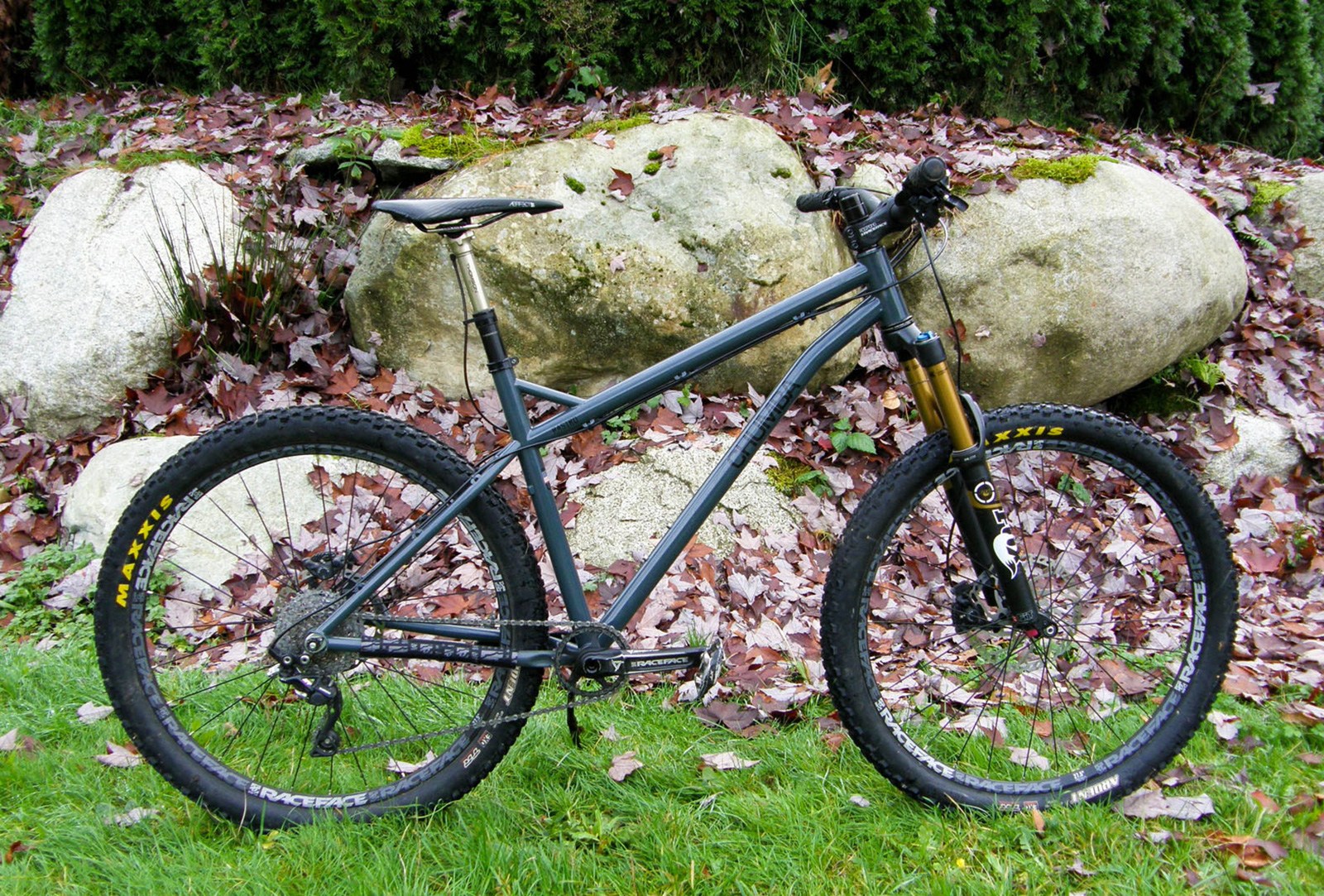 Tight rear, long front is the theme here. And classic straight tubes. This is the size large; plenty of standover there.

The Rastro is offered as frame only, or complete with the ‘Trail XT’ build kit, consisting of a selection of primarily Shimano and Race Face components with a custom 140mm travel Fox Float 34 fork up front. Weight as tested (large frame with pedals) is 29.75 lbs. Now lets have a look. 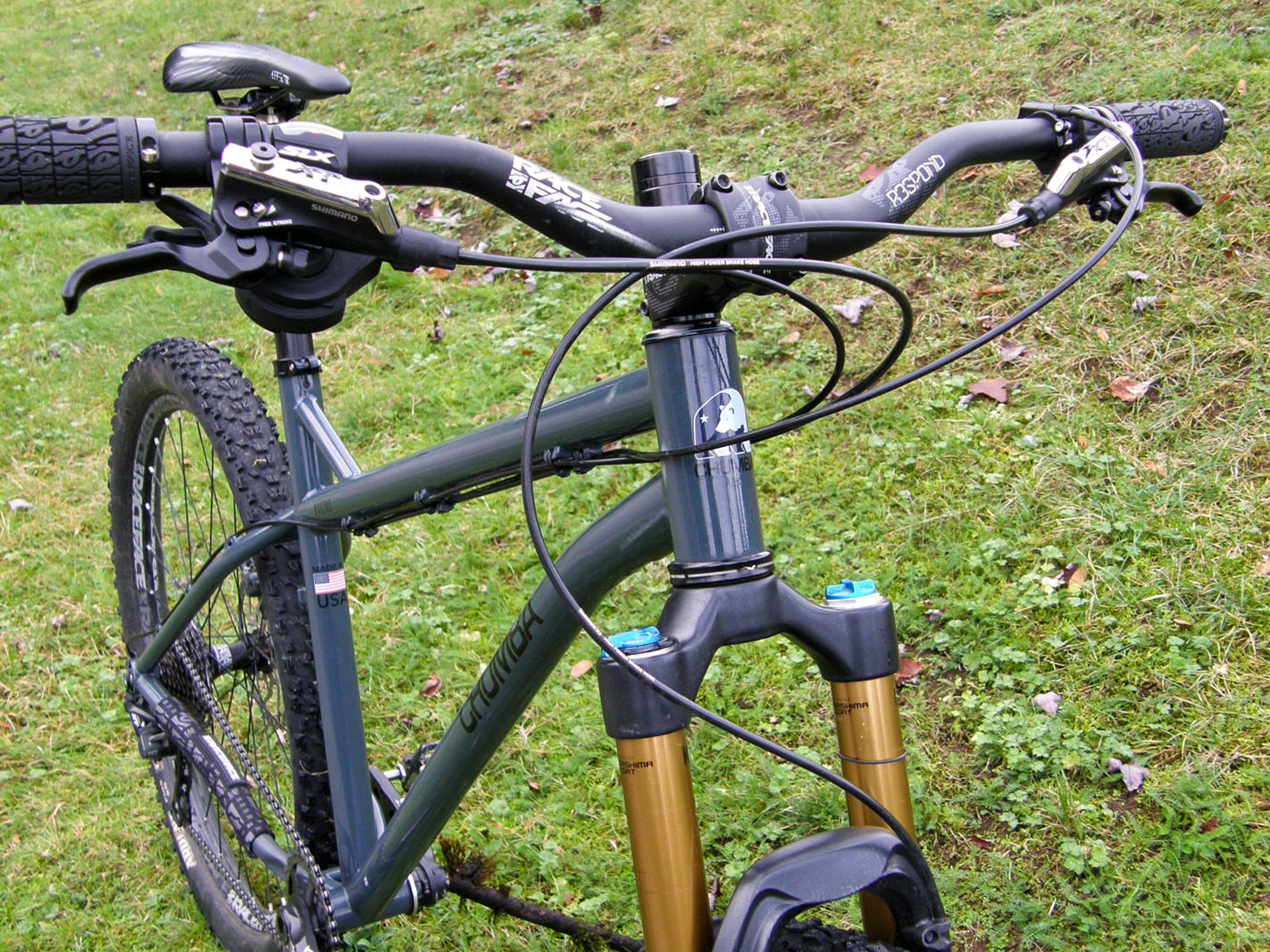 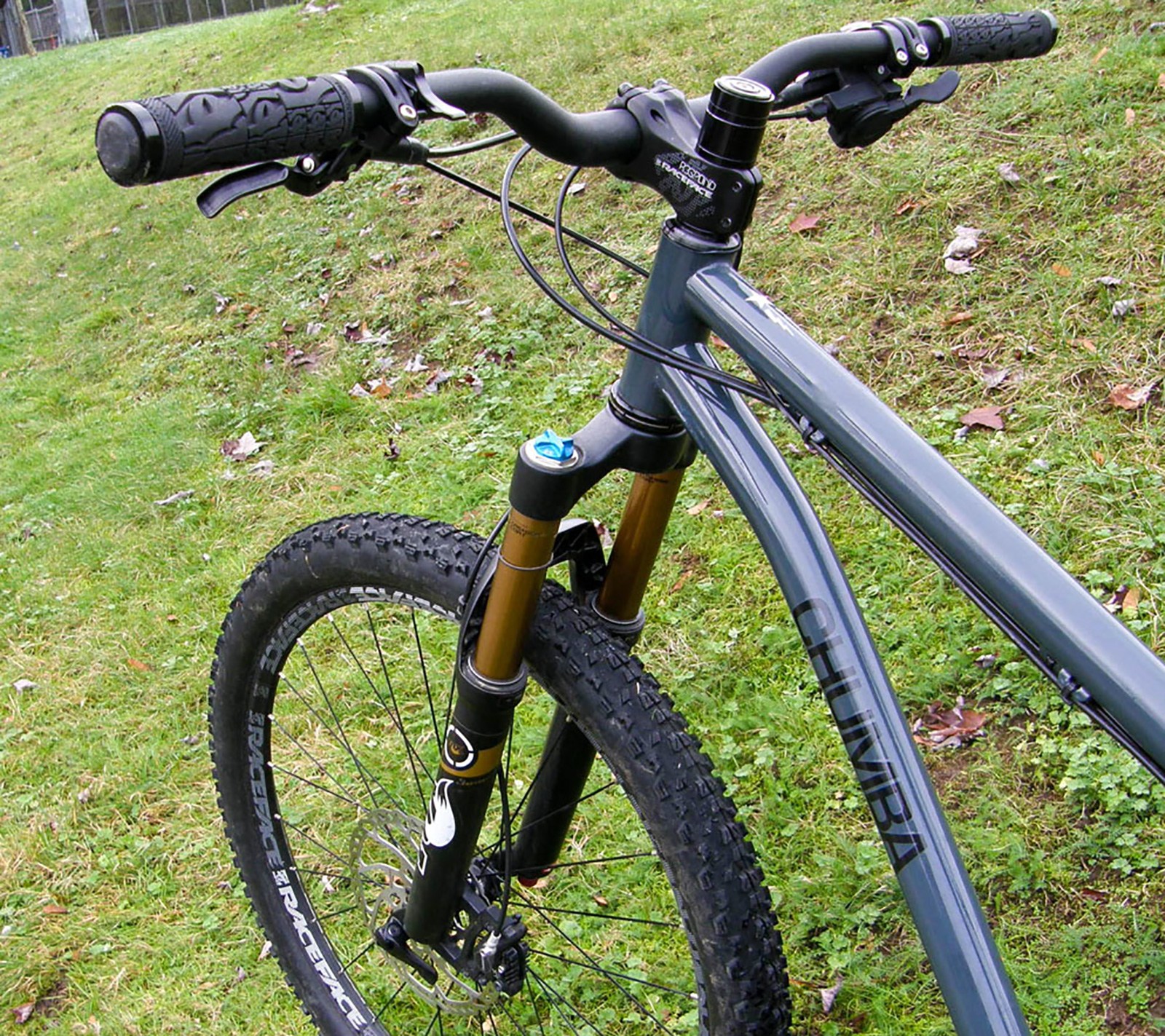 Not available in stores – the Kashima-clad Fox 34 Float in the build kit comes lowered to 140mm (stock height is 160mm). We’ll see if this number hits the sweet spot. Fleshing out the cockpit is a RaceFace ensemble consisting of a Respond 1 1/2” rise x 31” bar and 60mm x 10˚ stem with chunky Strafe lock-on grips. Yeah, that’s allot of spacers. The low BB in conjunction with a high rise bar called for a slammed stem. It’s taking great willpower not to break out the hacksaw. 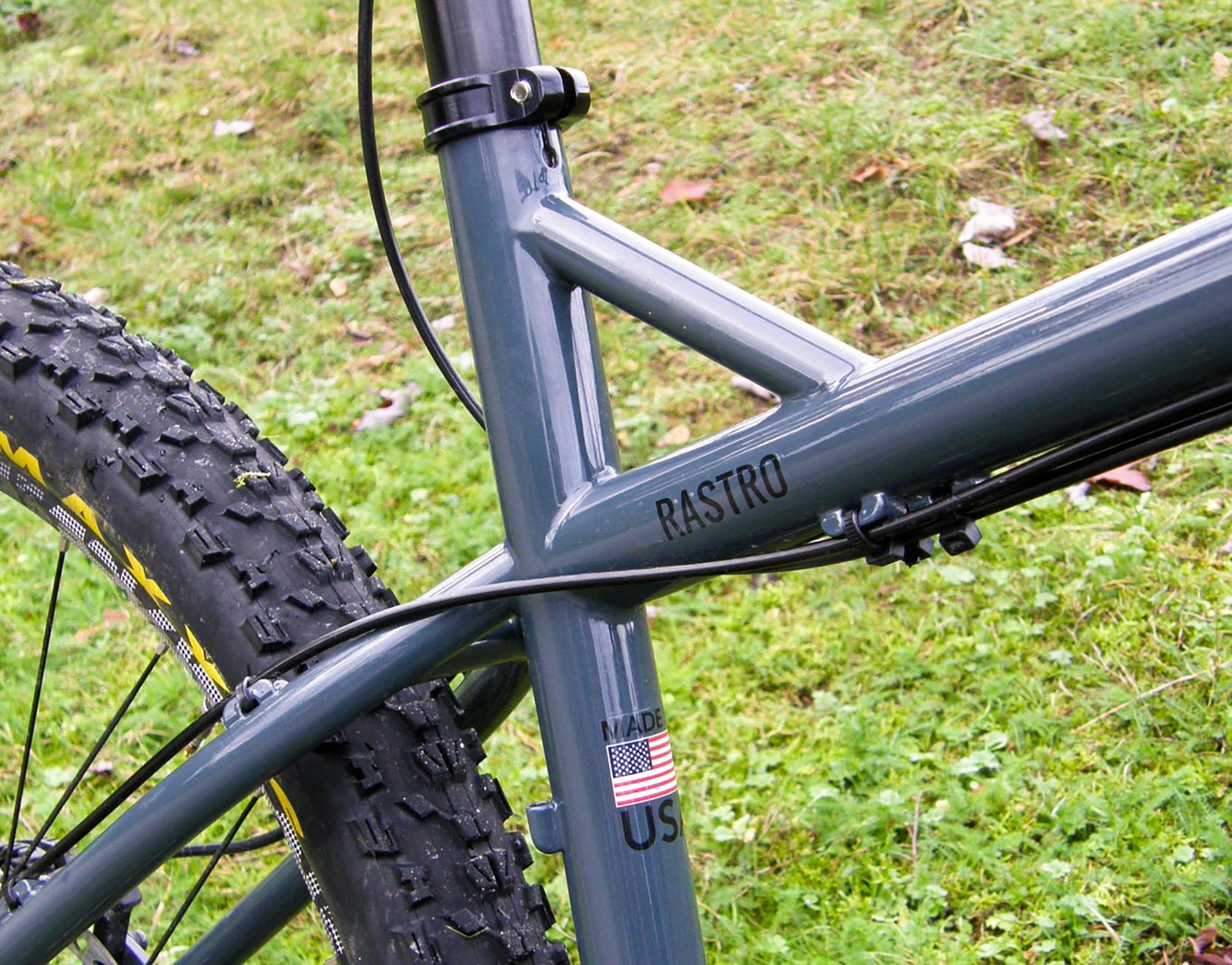 Not only is the frame built in America, the constituent steel bits are domestically sourced as well – with True Temper tubes and Paragon Machine works bottom bracket shells and dropouts. In these days of rampant offshore outsourcing, it’s refreshing to see a company focussing on keeping jobs at home. I love the aesthetics of the dropped straight top tube and brace. Lots of zip-tie cable mounts in all the right places. 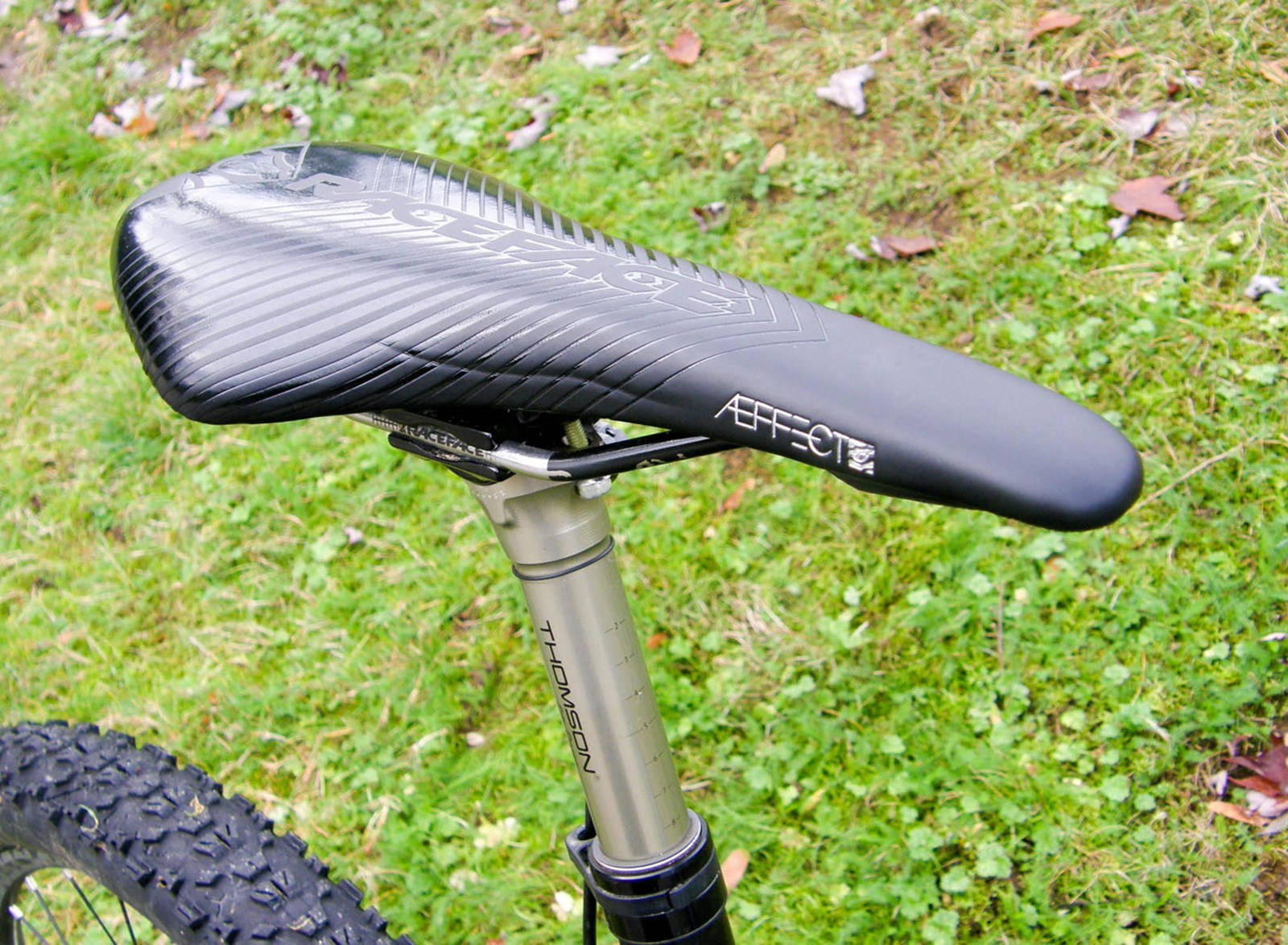 Raceface Aeffect saddle is surprisingly comfy despite it’s narrow profile and relatively minimal padding. Creases have already developed on both sides though; we’ll see if things degrade any further with more use. The optional Thomson post is a nice piece of kit. 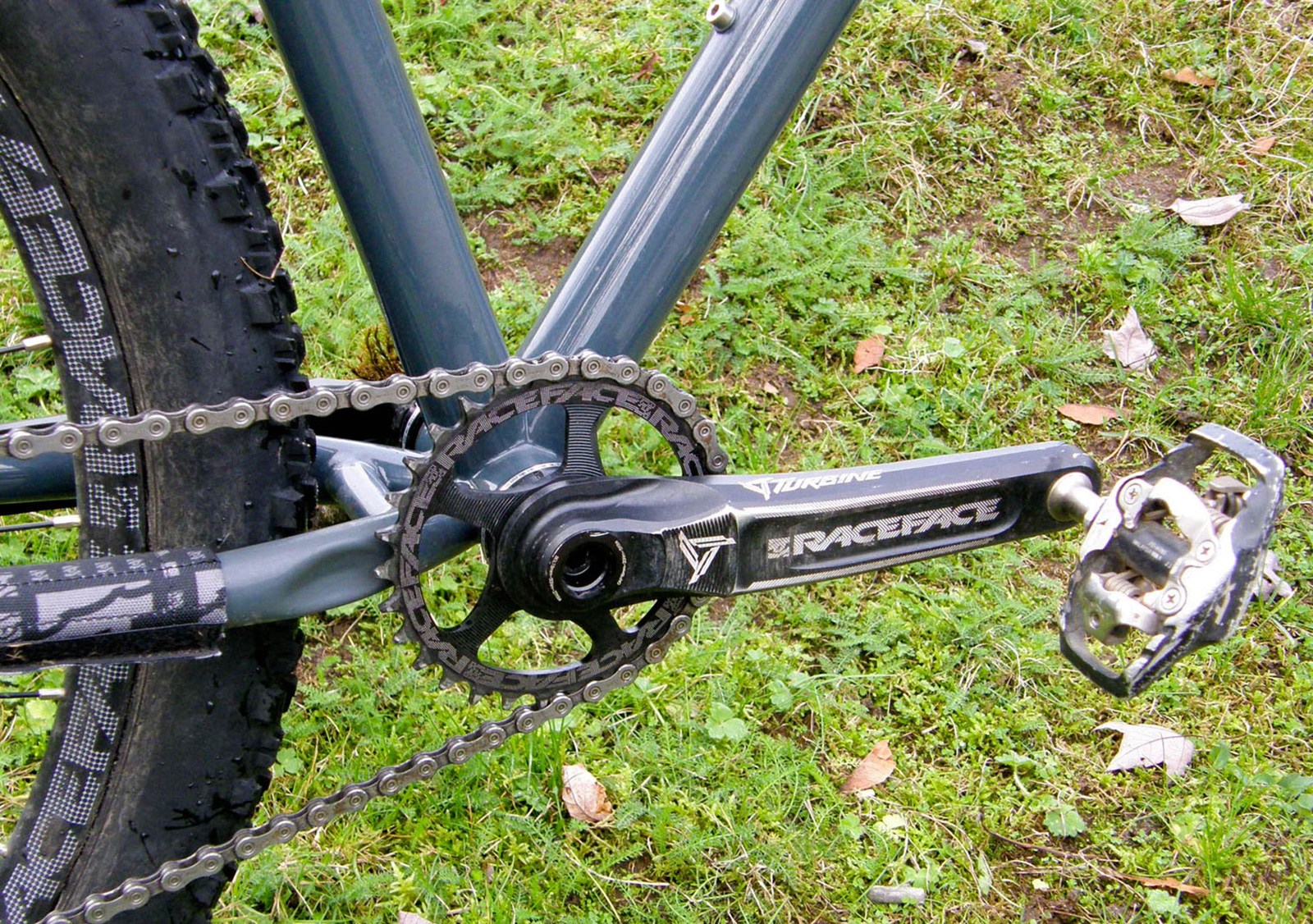 De rigueur front transmission bits: Raceface Turbine spiderless cinch cranks sporting a 30T N/W ring. Chainring clearance is a bit tight; I don’t think anything larger than a 32T would fit with the current spacing. Production frames will come with an ISCG mount. Pedals are not included with build kit. 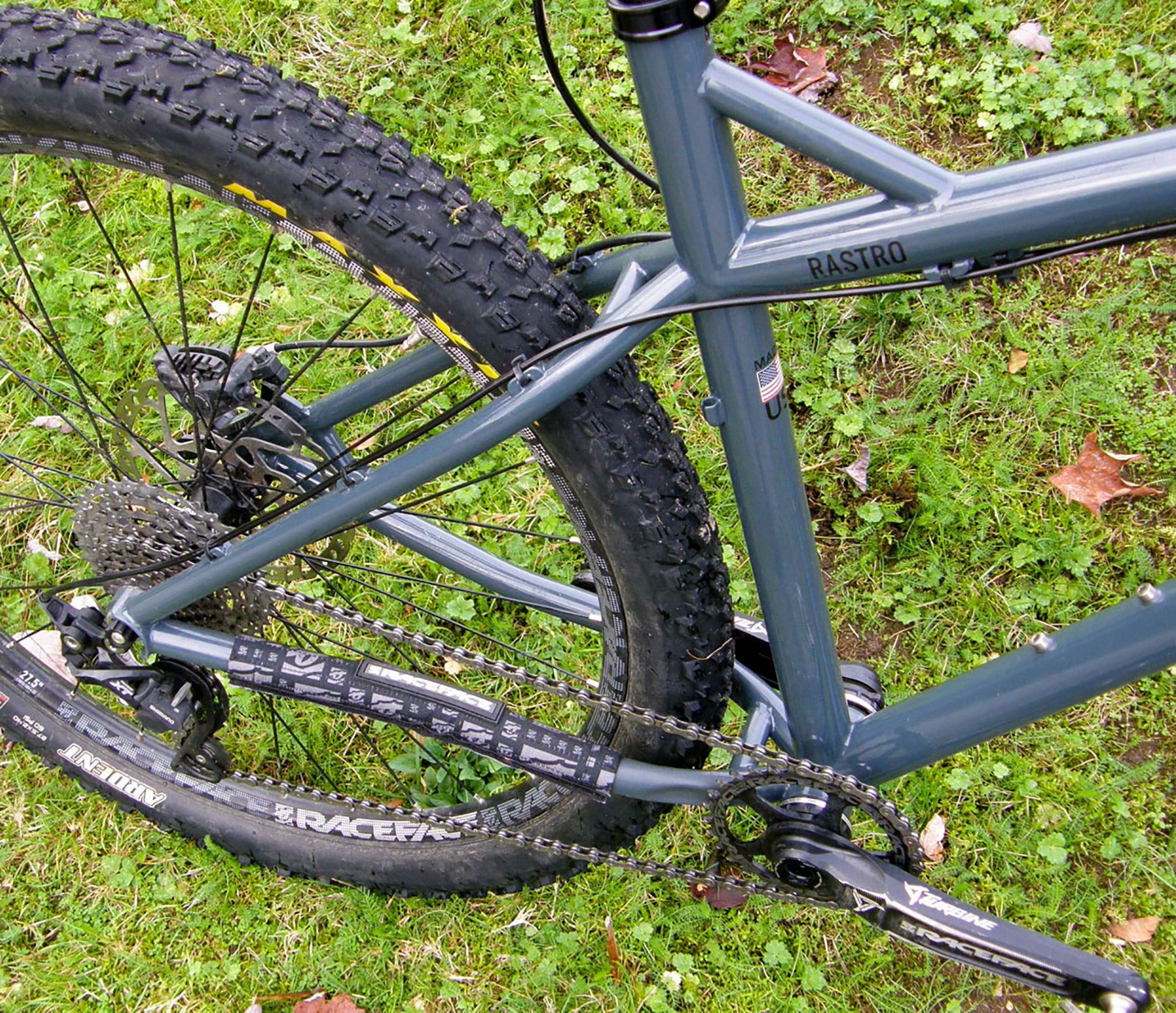 Tight 16 3/4” chain stays, and some significant BB drop (yielding a 12.3” BB height). RaceFace has expanded their product offerings to include wheelsets. The 28 spoke Turbine wheels sport straight pull bladed spokes and 25mm wide rims (with a 21mm inside width). Wheelset weight is a listed 1800g. They’re a bit on the narrow side by current standards, but I’ll get some solid time on them prior to passing judgment. 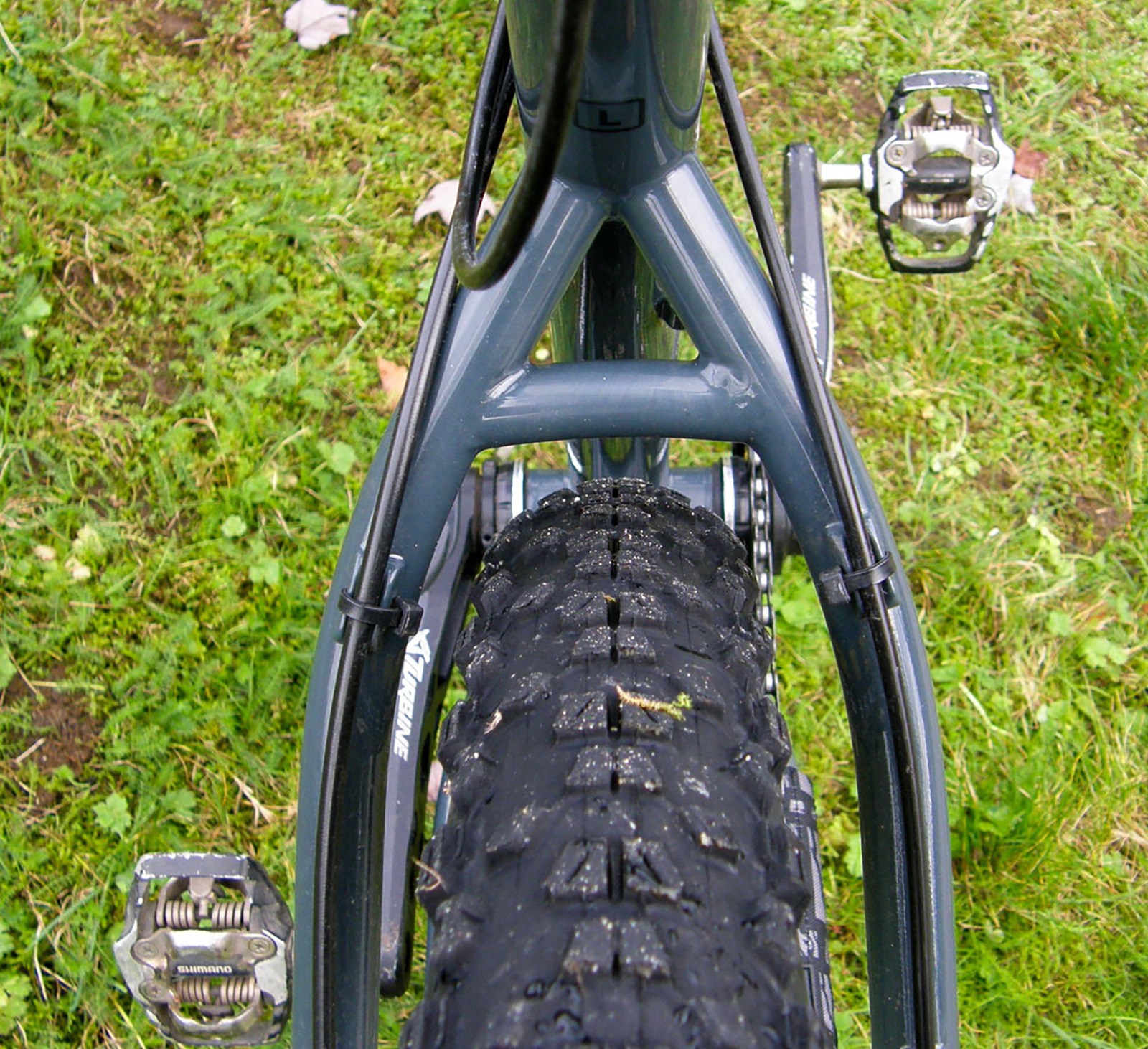 The build kit ships with Maxxis Ardent EXO 2.4 tires. Tread is a bit minimalist for a sloppy season on the shore, but I’ll give them a go. Drifty tires can be fun. Decent tire clearance up top… 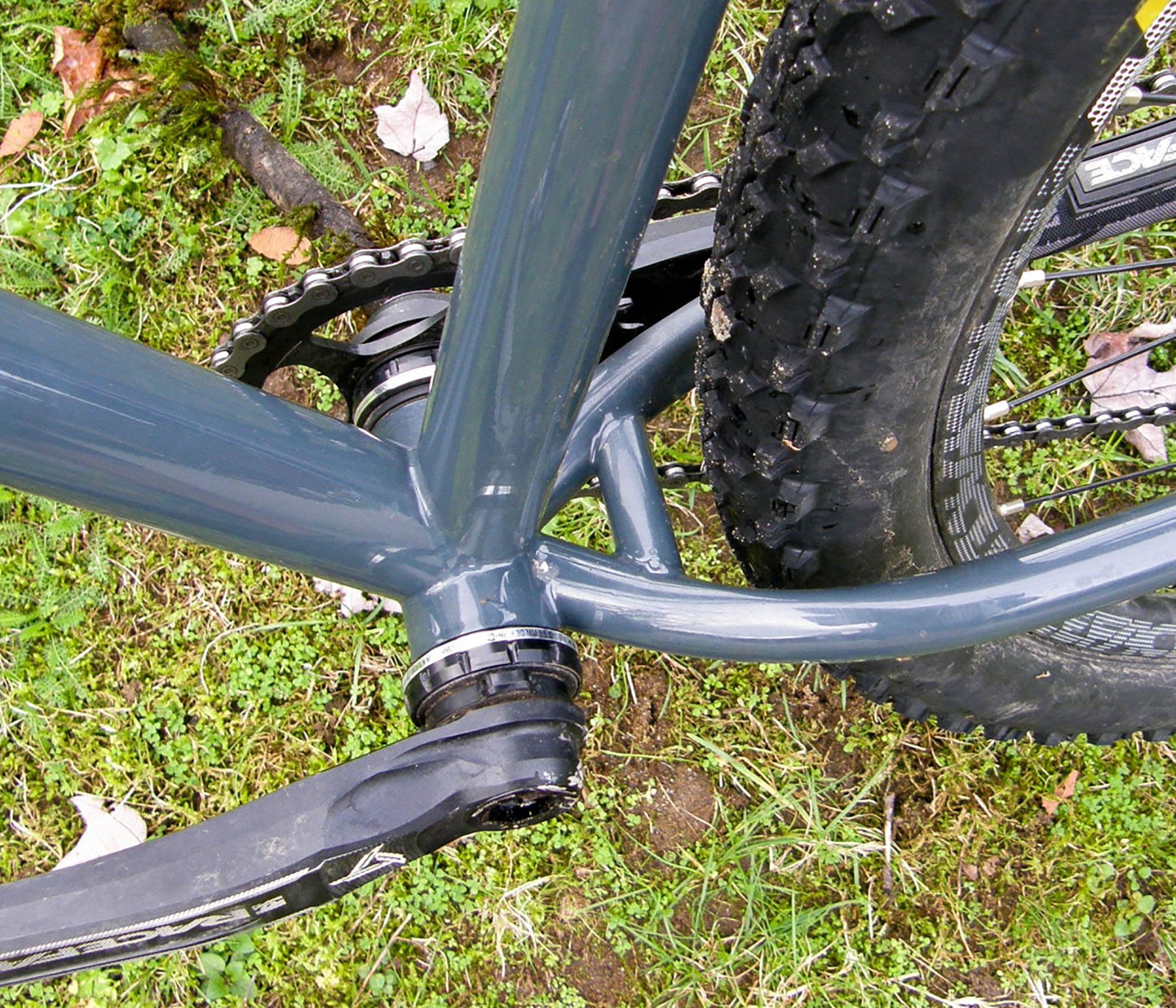 …as well as below. 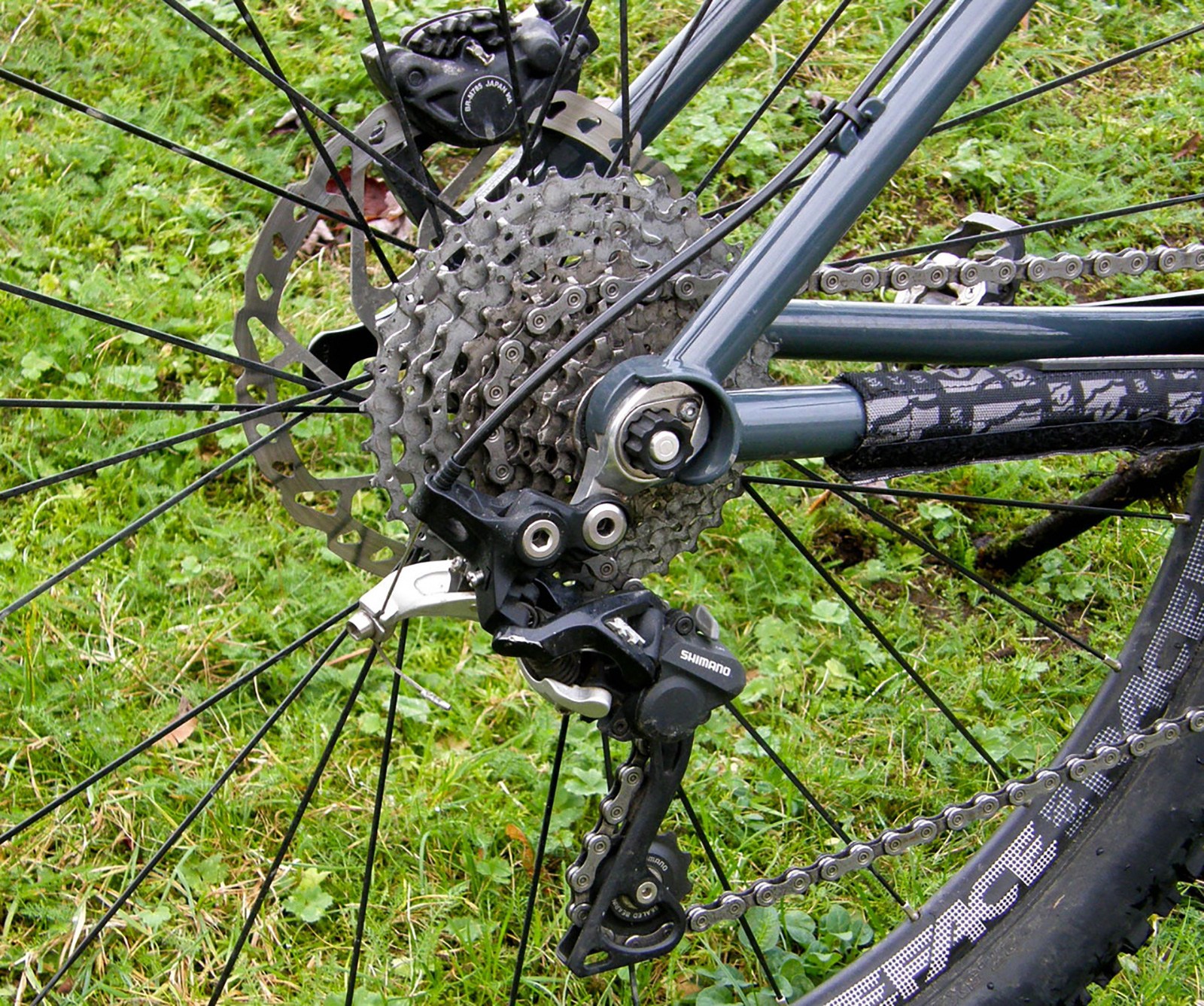 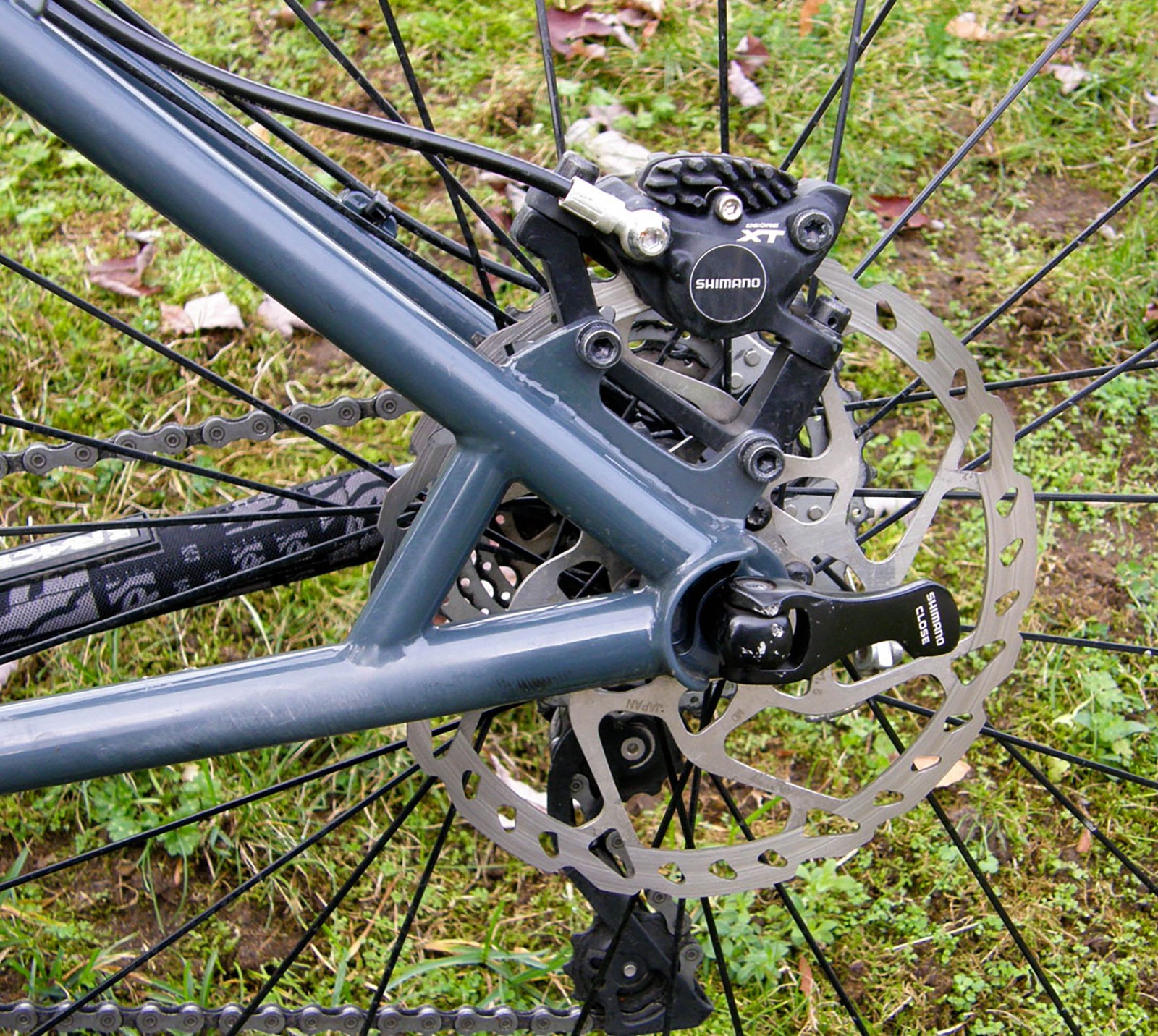 XT brake out rear with a 180mm rotor (front gets a 203mm), and a tidy calliper brace to tighten things up.

Initial ride thoughts? I’ve been out on the bike a few times so far (in between the monsoons we had here in Vancouver) and it’s been good fun out of the box. It’s a great technical climber – love the low BB and tight rear, and the seat tube angle and nicely stretched front centre length are spot on for my 6 foot frame. The 67.5˚ head tube angle is a good bit steeper than my personal hardtail (Ragley Bagger), and as such I’m not immediately as comfortable on the steep tech. Perhaps more acclimatization is in order. On less burly trails the bike is a fun, poppy, carving machine. A sprightly thing, if I may be so dorky. Overall, this is a tidy package. I’ll toss it about for a few weeks and let you know how things fare. 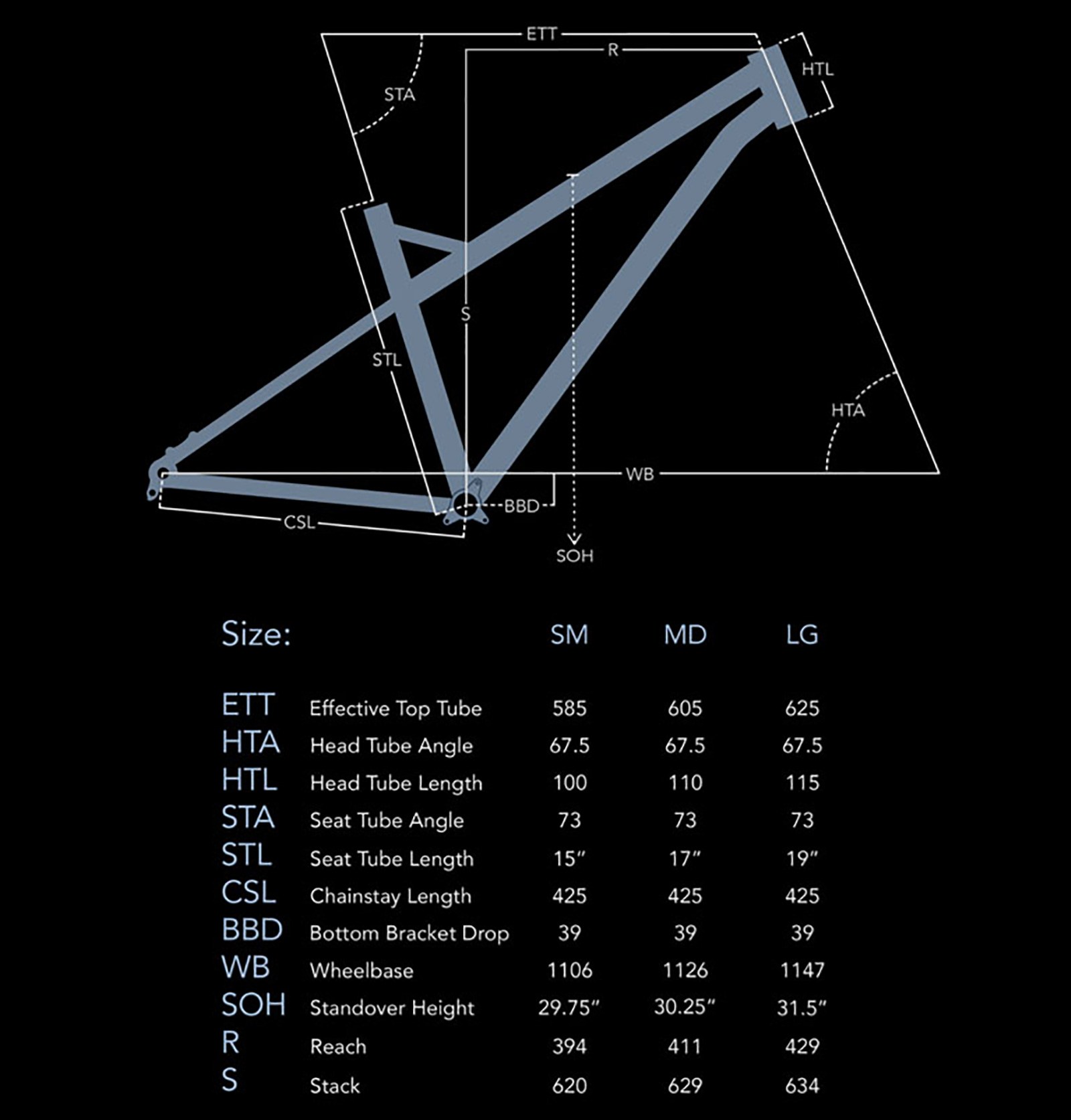 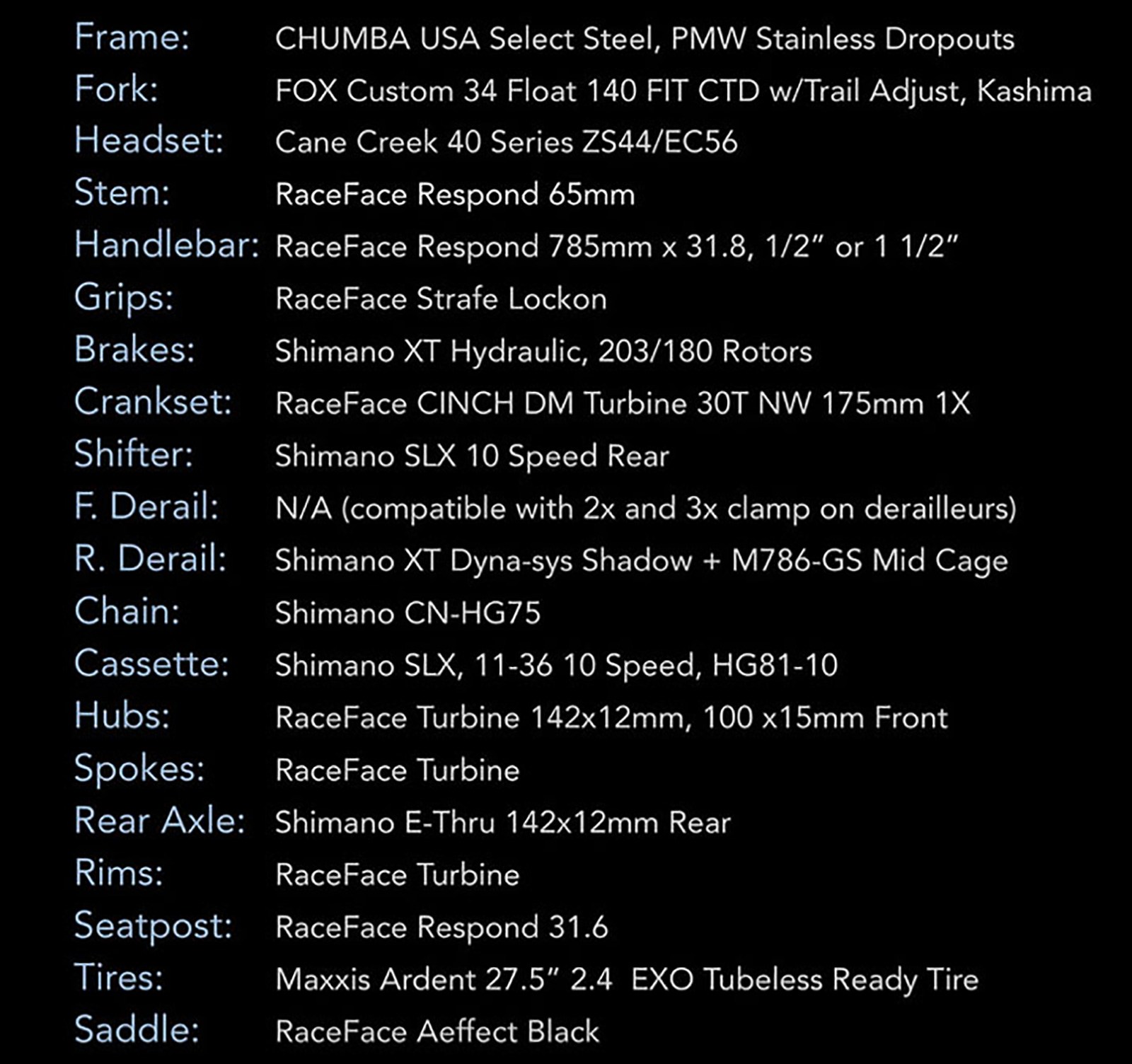 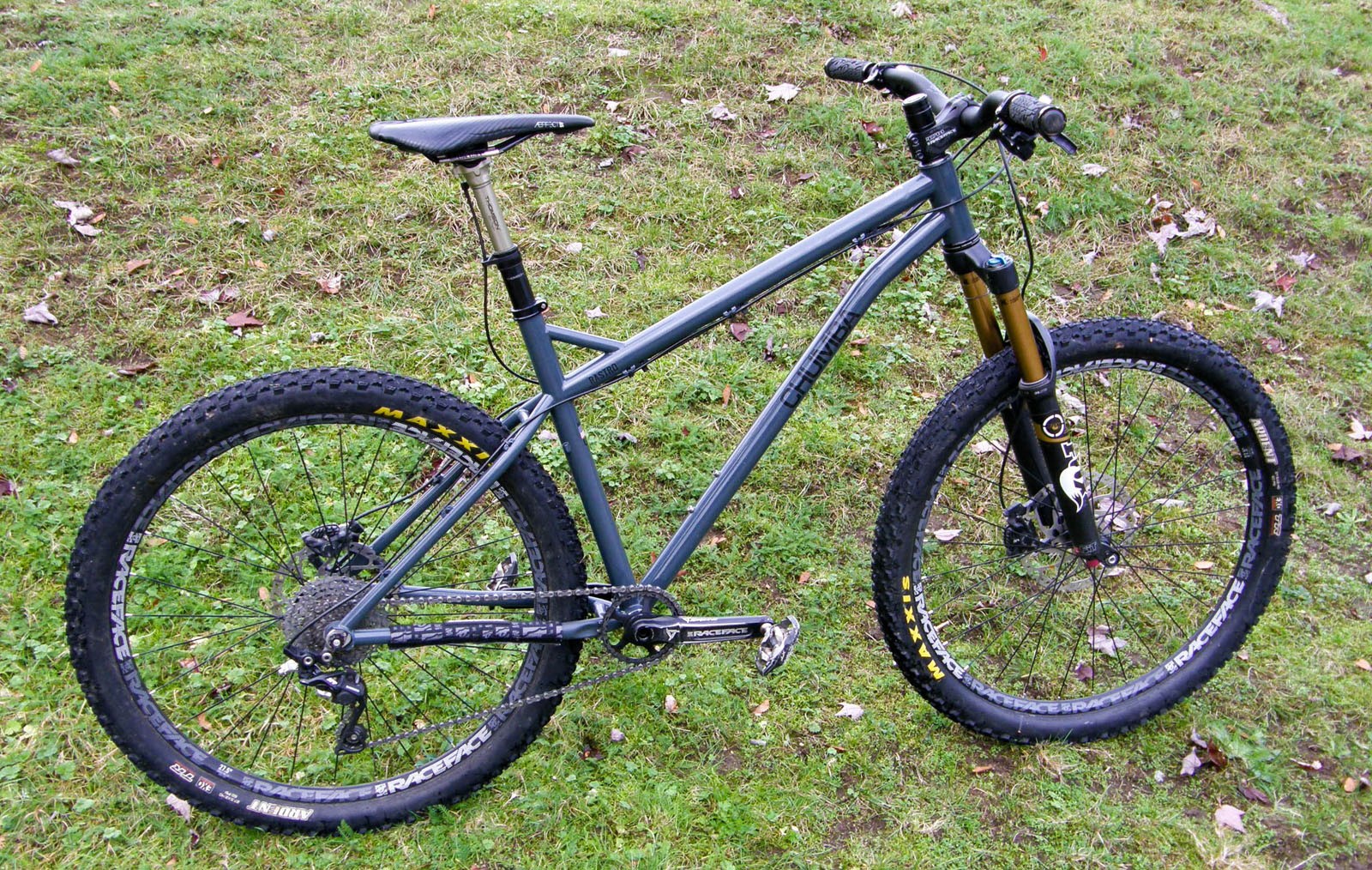 One more look before she gets really dirty.

Their efforts to source on-shore are laudable. A worthwhile purchase for that alone.
Slacken the ha a degree and losing some weight make it more attractive 'round these parts.
To my eye that s/s bridge looks crooked though.
Oh yeah, don't need more than an old Raleigh 3-speed to ride Minnesnowta trails, eh?

Thing looks outdated….. skinny, heavy frame; those narrow looking riser bars, KMart written all over them. Why? You can get a well sorted and lighter Trek/Giant/GT or whatever.

bike doesn't do much for me aesthetically, but the numbers are spot on for a trail hardtail, and that's a nice price for a made-in-the-usa frame

Sorry to be a hater, but how many trails require a dropper post? They're appearing on almost all bikes nowadays, but I've never ridden a trail that needed one. What ever happened to just shifting behind the seat when the trail pointed down? It seems like its just a another add on gizmo to push up the price the will be the first to break.

Really? Where do you live?

Minnesota. I admit that my riding is limited to MN and Wisconsin, so the elevation and rocks of out west riding haven't been part of my trail experience. I'm just curious why dropper posts are appearing on almost all bikes?

I have a hard time riding without one. It will transform your riding, unless that riding is limited to crushed gravel bike paths.

I grew up in Toronto so I sympathize. It ain't like that here. It's not the rocks so much as the steepness. There's trails around here that are so steep your rear tire buzzes your shorts. But the average trail could have steeps linked to a traverse linked to a climb linked to a moderate descent - all of which are served better with the correct seat height. In the old days you'd just make do with it always being a little too high or a little too low. Now I don't have to stop - I can just keep going. I probably adjust my post 50 times a ride anywhere from full extension to fully dropped.

You can get away without a dropper post even in really technical areas… just depends on how your rides are structured… if its all up and then all down, then a dropper isn't that useful. But for most rides its beneficial….

And meh, on the Chumba frame….. did not elicit any excitement.