The Chilcotins Claim Another Cherry

The manager at the first bike shop I ever worked at was a bit of an eccentric, and he liked to talk. One of the subjects he enjoyed holding forth on while we were sweating over our wrenches in the mid­summer heat was the magical mountain biking trails in the Chilcotins. 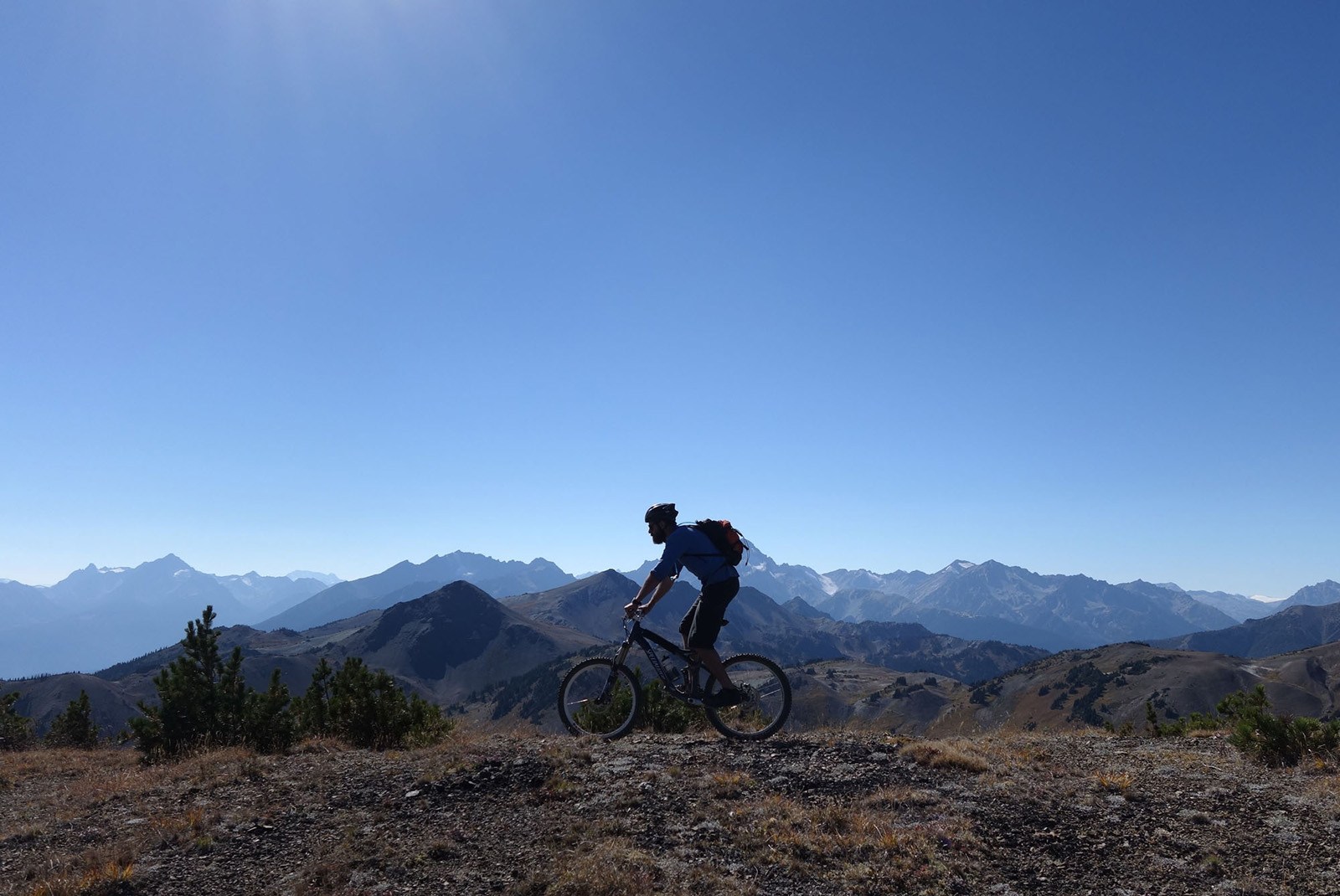 According to my manager, the Chilcotin trails had been built by the First Nations people in the area at the dawn of time, and were used primarily by backcountry horse­ packers. They offered entire days of uninterrupted singletrack flow, reaching from stunning mountain passes, past glacier ­fed lakes and through alpine meadows bursting with wildflowers, and ending at a hand ­built, lakeside lodge, where craft beer flowed from bottomless kegs. To a junior mechanic, high on bikes but resigned to wasting his summer chasing extra shifts to save money for college, it sounded like heaven. 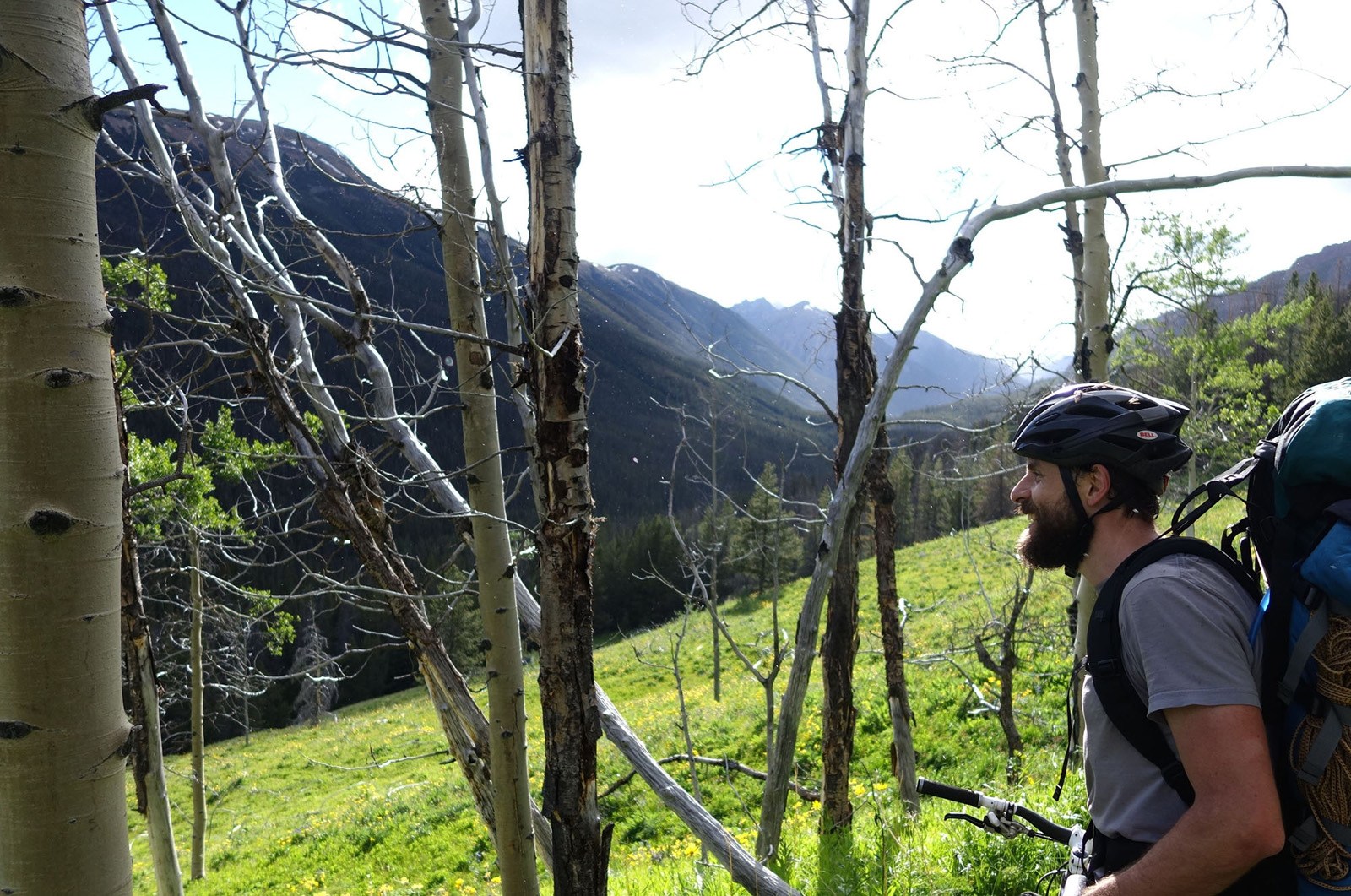 In the ten years since I left that shop, the Chilcotins have gone from being a service­ centre rumour to THE hot backcountry biking destination for riders in south­western British Columbia. I had always meant to make my pilgrimage to the area, but life, at first imagined, and then real, always seemed to get in the way. 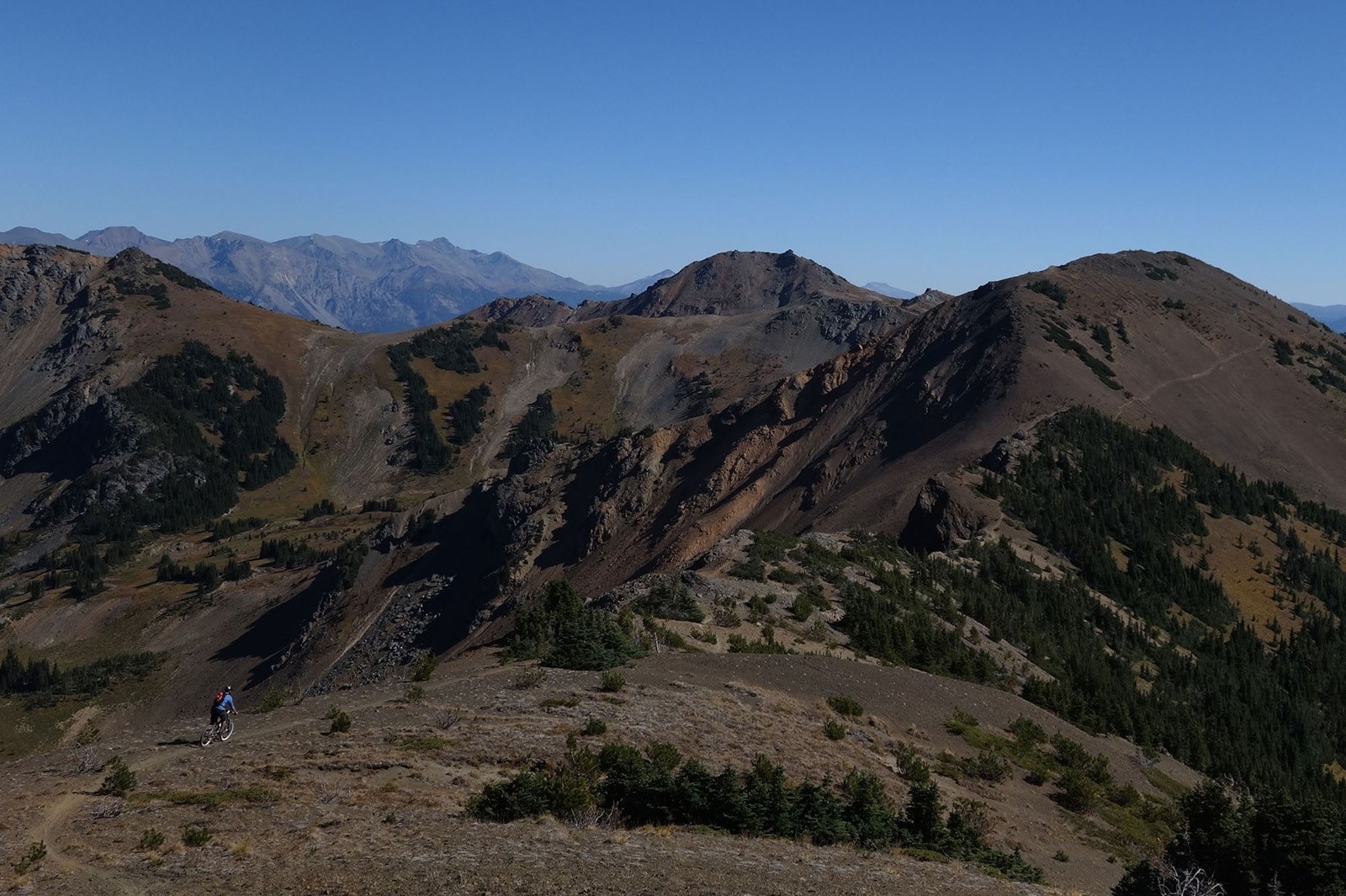 By the time Jonas (my fellow shop­rat during that fateful summer) and I finally decided to make the trip, I admit it was, for me, more out of a sense of obligation than adventure. I wanted to want to ride those legendary backcountry trails more than I wanted to ride them ­but I trusted that even though the visceral drive seemed to have all but deserted me, the experience itself would -­ must ­ -reawaken the urge I’d felt on those long summer days in the shop, and with it a sense of adventure that I felt myself losing. So last year, on Canada Day long weekend, we loaded the truck and drove up the Sea­to­Sky corridor, past the hordes lining up for unearned laps at the Whistler bike park, and over the menacing Hurley Wilderness Road to Tyaughton Lake: the jumping off point for most riders heading into the Southern Chilcotin Range. 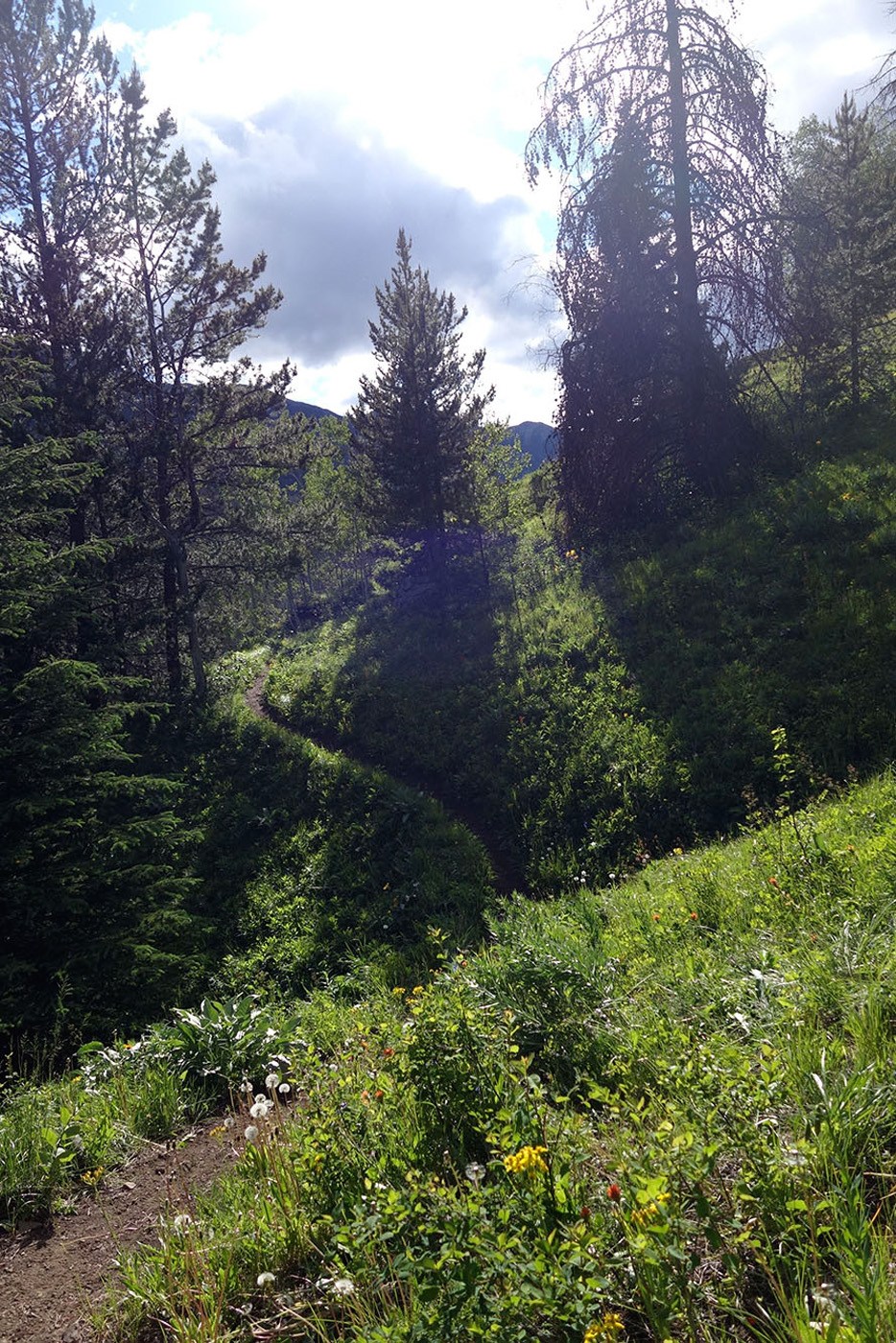 Climbs suck less when they look like this. photo: Omar Bhimji

While a local operator will fly you, your bike and gear to the lake of your choice in a de Havilland Beaver for a reasonable charter, it was long ago ground into me that the discerning dirtbag humps his own gear into the backcountry. Our first day consisted of a gradual climb up the Gun Creek trail, following the eponymous waterway for several hours until we took a wrong turn in a subalpine meadow. Blissfully unaware that we were lost, we made our way through a series of stunning meadows and down an all­too­ brief descent to a secluded lake socked in by towering Spruce trees, where we set up camp. 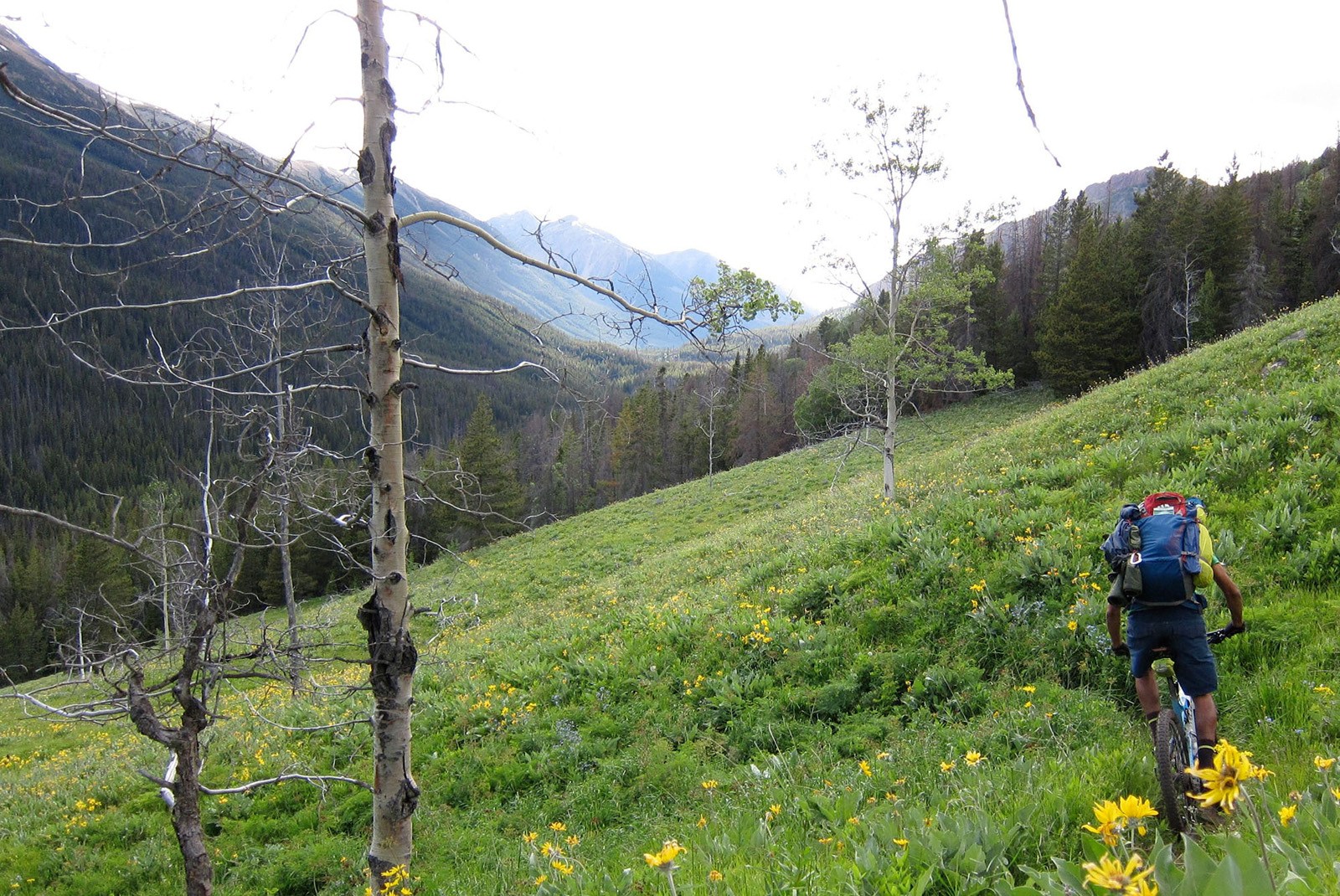 We were notified of our mistake by a group of passing riders on their way back to our original destination ­- Spruce Lake -­ where, we were informed, “the real action” was. Undaunted, we decided to stick it out at our empty campground (on what we learned was Hummingbird Lake) and enjoy a quiet first night in the wilderness.

On day two, we faced a dilemma. Should we pull up stakes posthaste and pack our gear over to Spruce Lake, from which a number of well­established day rides were said to extend? Or try to cobble together our own day trip from our current location, and move our gear over in the evening once we’d sated our singletrack craving? 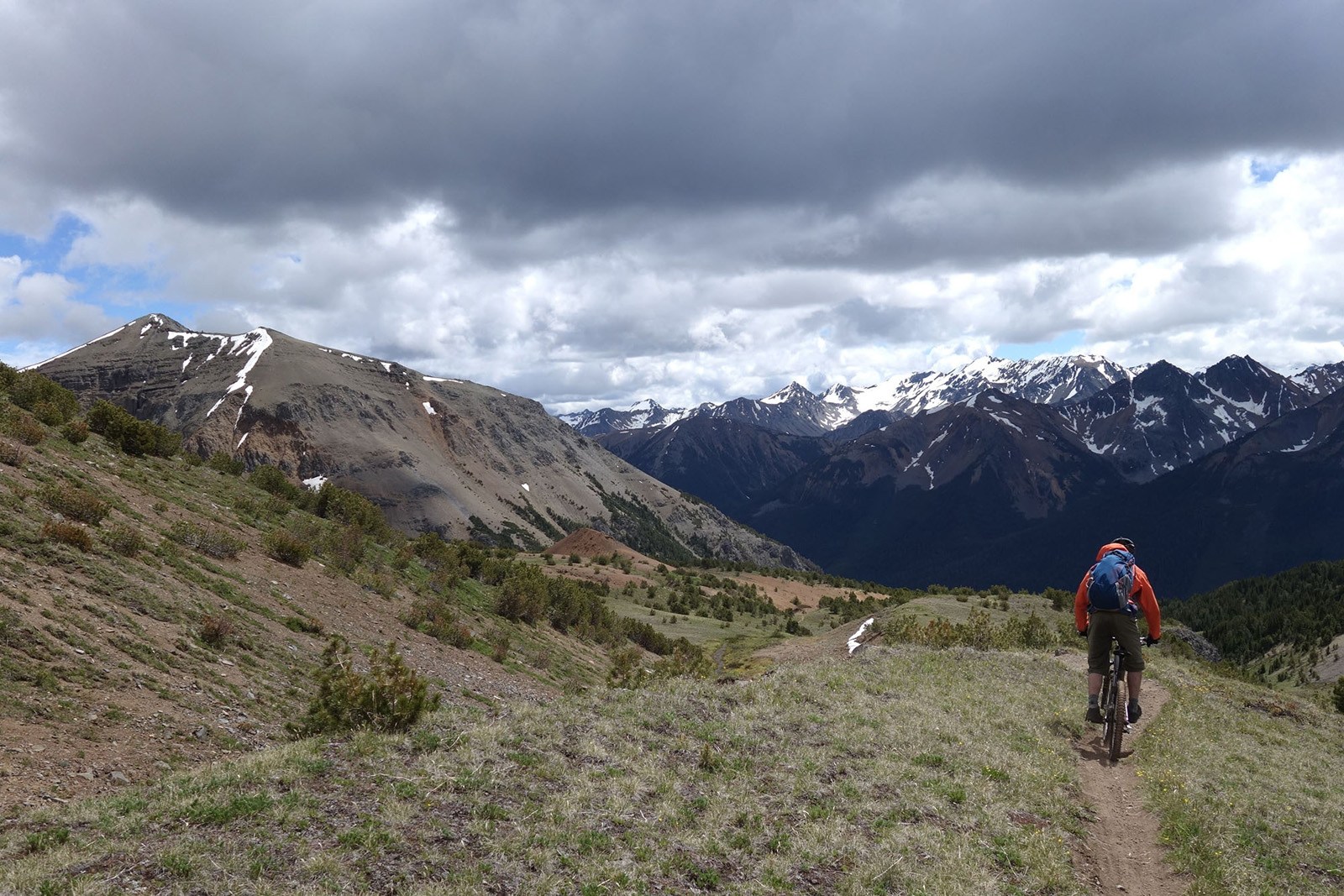 Whosoever is delighted in solitude is either a wild beast or a god. photo: Omar Bhimji

Anxious to cook some unencumbered corners, we opted for door number two, and spent the morning carrying our bikes up the descent from Deer Pass. This was not the standard way to access Deer Pass, and not for the faint of hoof: the climb was steep, the trail loose and the going slow. We persevered, and were rewarded at the summit with stunning views into the Tolkien­esque Tyaughton Creek valley, followed by a well earned descent back the way we’d come: the kind of surfy, white ­knuckle ride that rips unconscious whoops and shrieks straight from your inner child. We retraced our tracks to camp, waited out a flash hail storm, packed up and moved on to the Spruce Lake campground – though not without getting a little lost, once again, in the treacherous Gun Creek meadows. 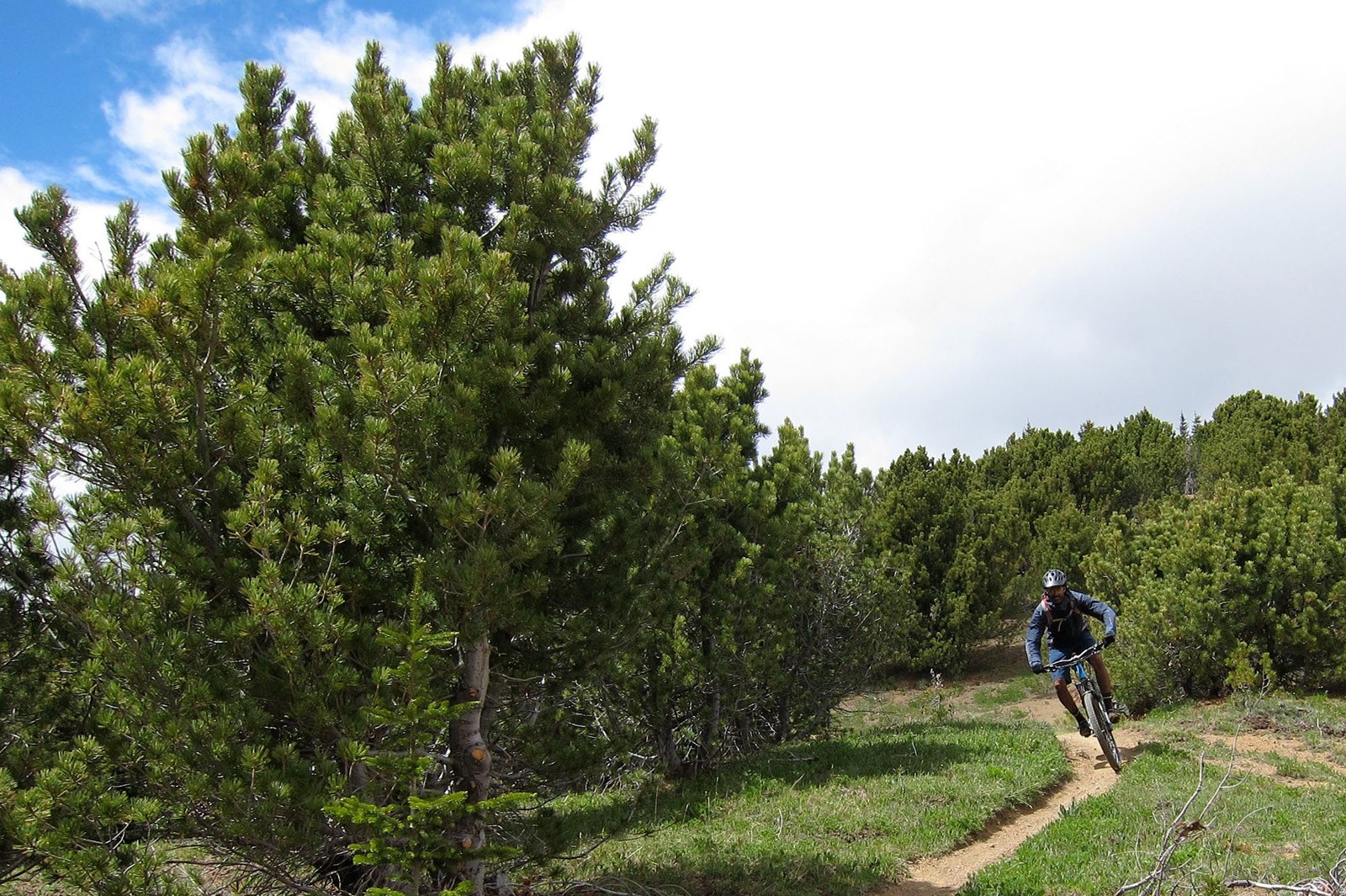 Spruce Lake, the jumping­ off point for a number of day­long rides into the surrounding mountains, was everything we’d heard it would be. The campground was bustling with activity of hiking and biking groups, many of whom had flown themselves, and rather lavish setups, into the backcountry. After dinner we joined a group of hikers to watch the sunset and sample some big dollar scotch, and then met up with other members of the mountain bike tribe for a series of fireside safety meetings that extended long into the night. 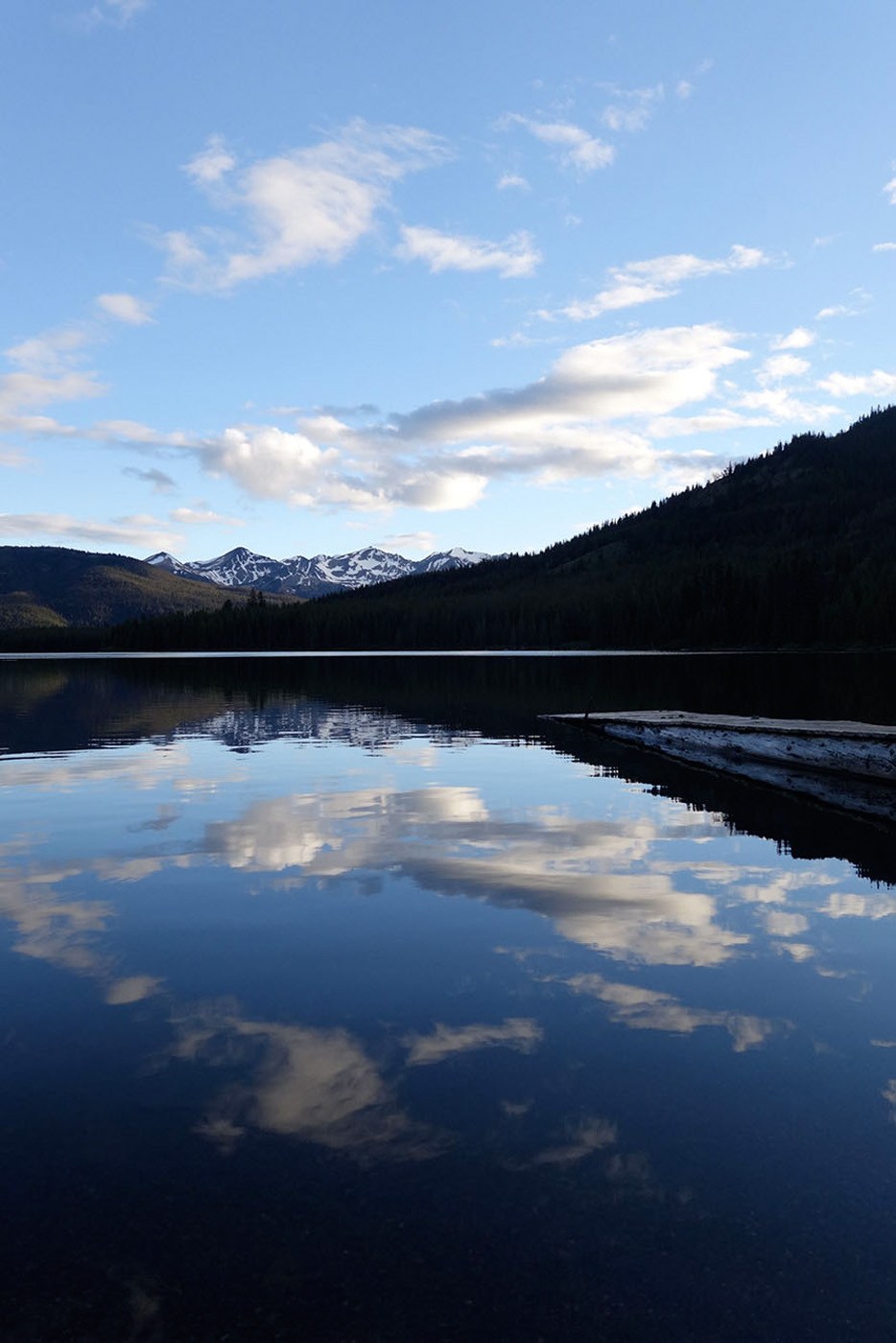 Spruce Lake is all it’s cracked up to be. photo: Omar Bhimji

On our third day we opted for another out­ and­ back, hike-­a-­biking our way up to Windy Pass, where we were treated to breathtaking view of the many surrounding mountain ranges, and then riding down into the aptly­ named Eldorado Basin, itself a nexus of a number of trails and trips in the south­east corner of the region. After lunching in Eldorado and riding back up to the pass, we spent the better part of an hour shredding heavenly singletrack ­across scree slopes, through alpine meadows and into the tree­ line, ­back down Windy and into the forested valley to Spruce Lake. 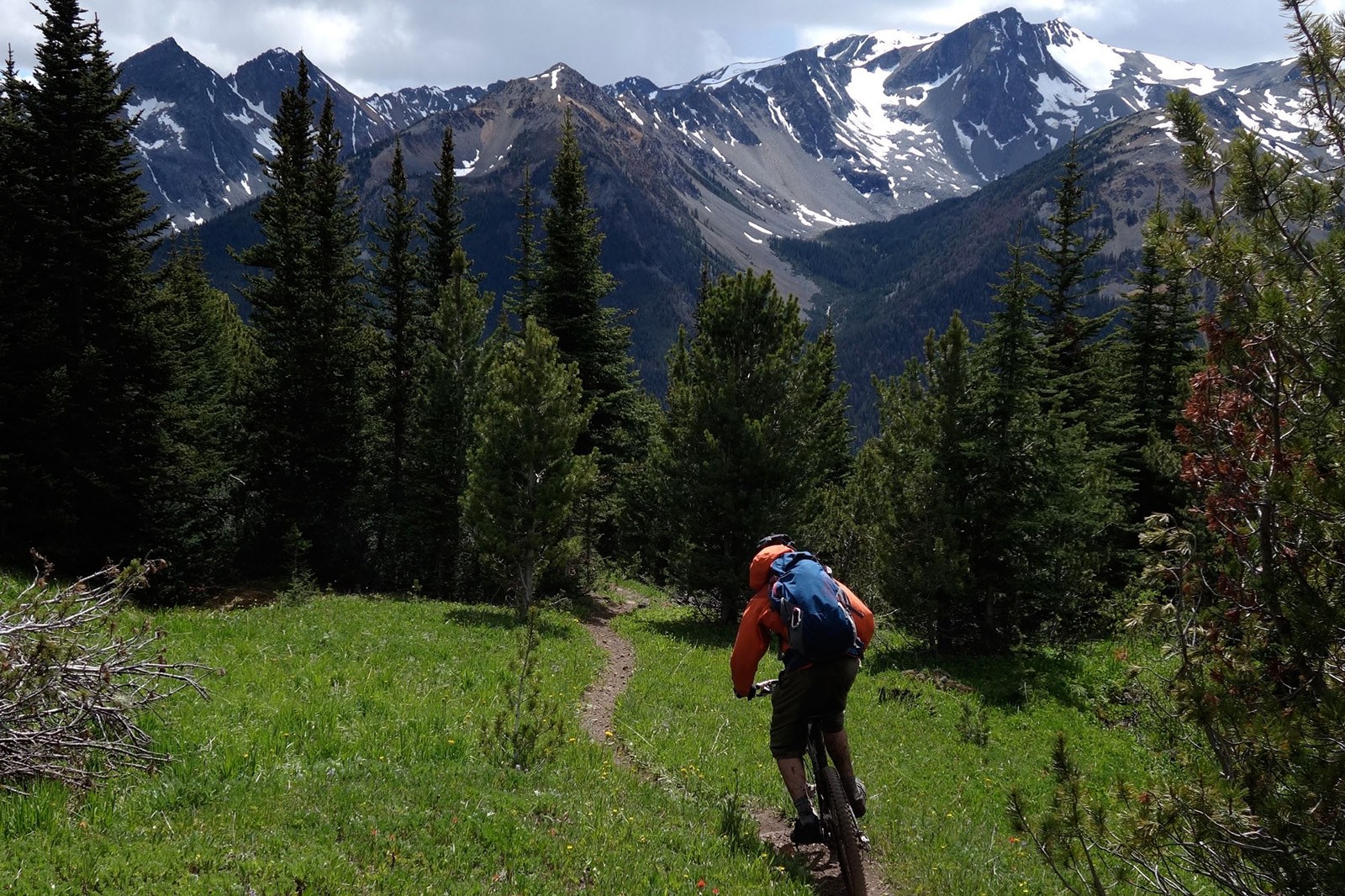 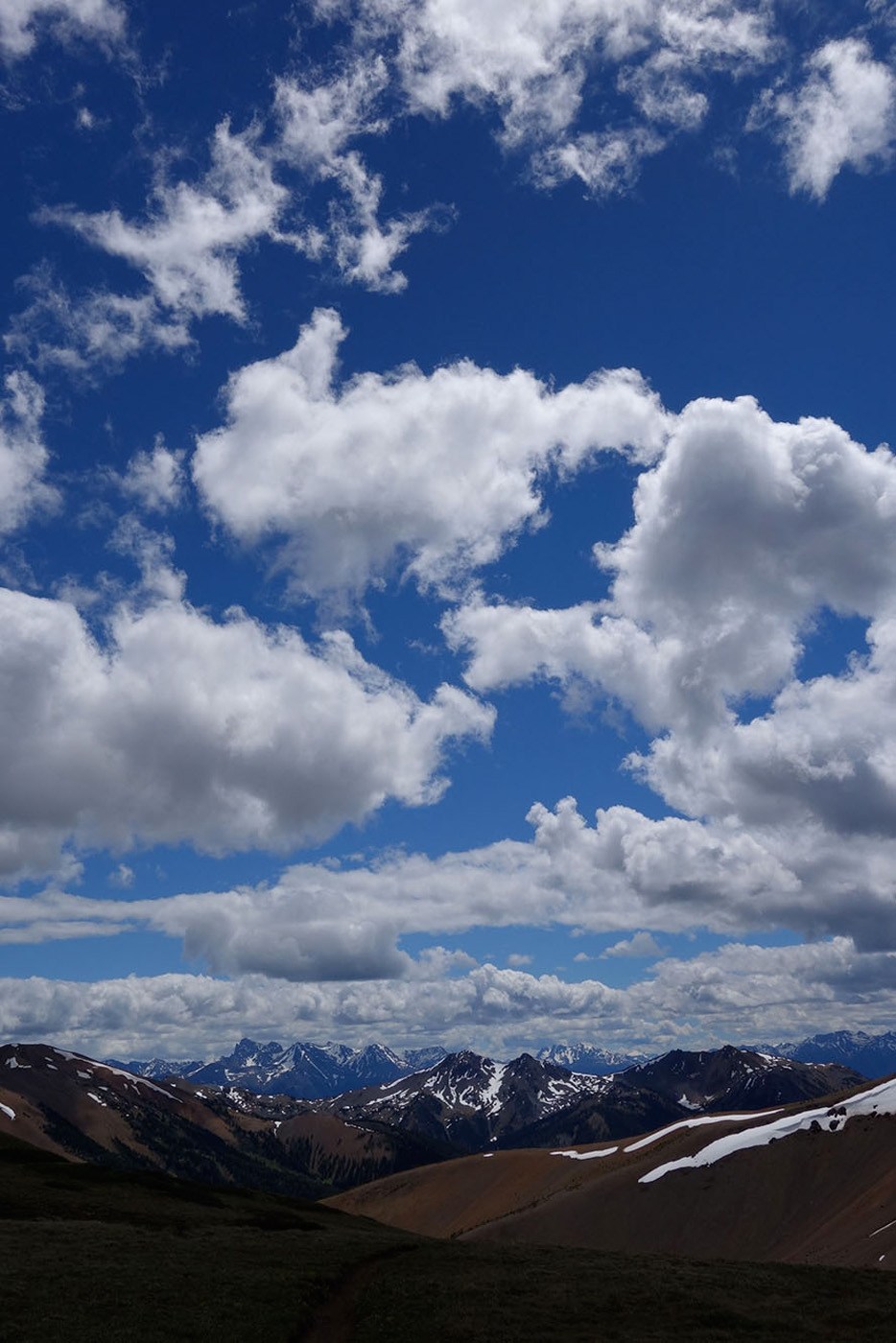 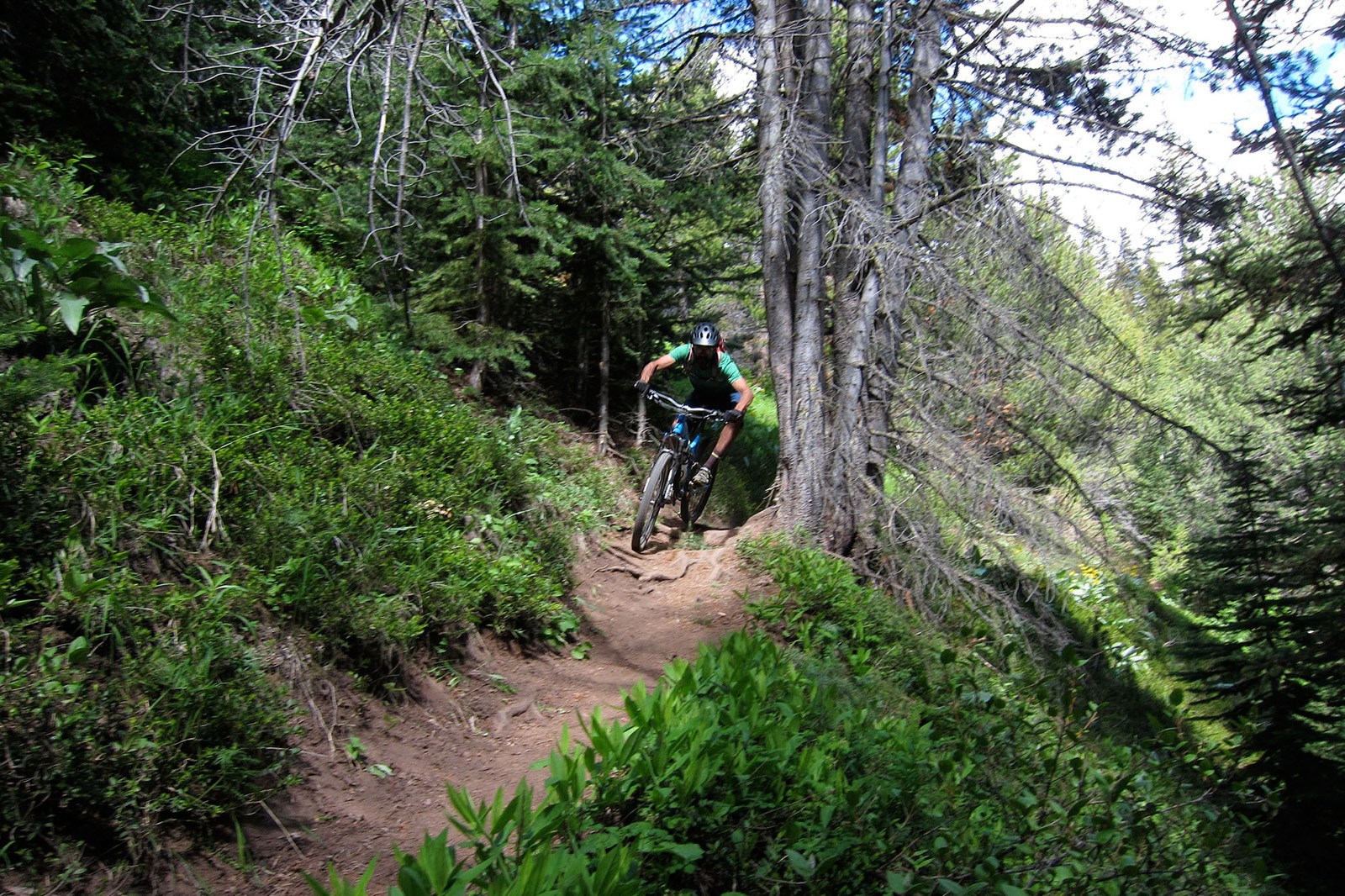 We arrived back at camp in the glory of mid­-afternoon, jumped straight into the lake, and spent the last few hours of daylight trying to coax fish out of it. En route back to our campsite empty-handed, we were gifted a fresh rainbow trout by a fellow rider who’d had much better luck, which we promptly dressed and cooked over the fire as twilight descended in the mountains. 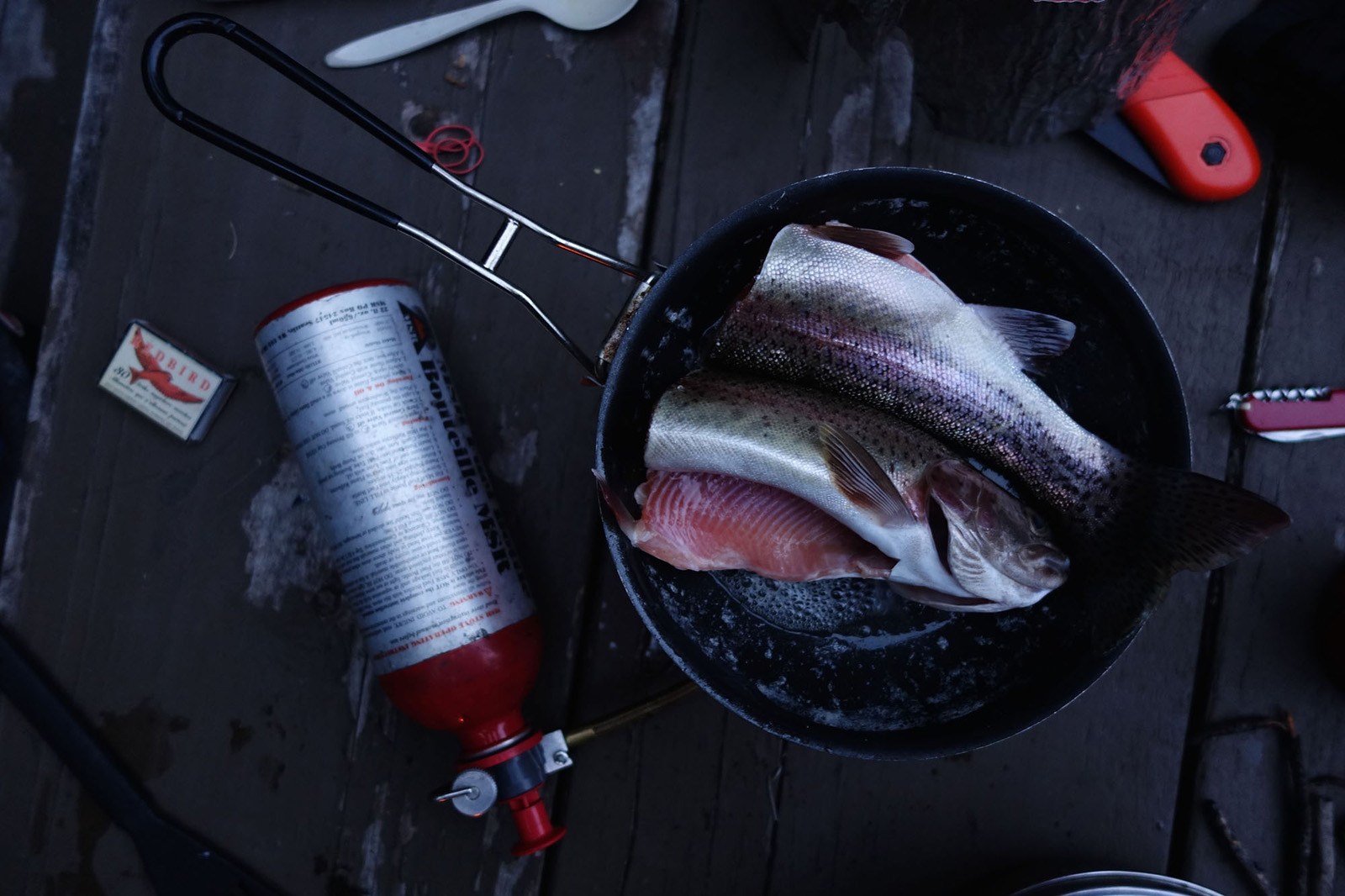 He may have been happy in the lake, but he looks right at home in the pan. photo: Omar Bhimji 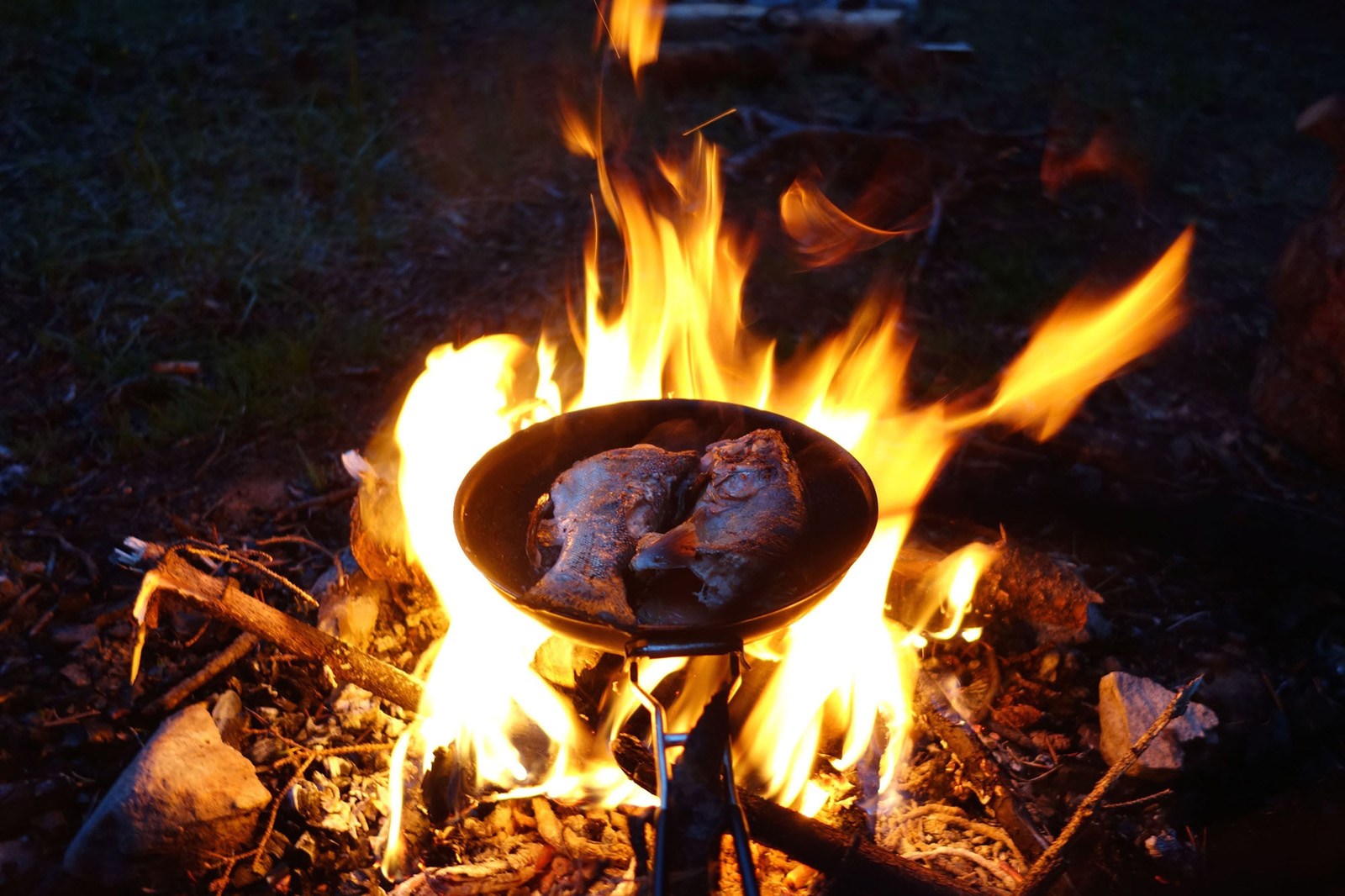 On our fourth and final day we faced another quandary. Did we have the time and energy to burn a quick loop before heading back to the truck? Or should we skip the extra ride and make our way out at a leisurely pace, with plenty of extra time to navigate the tricky Gun Creek Meadow vortex that had already jammed us up more than once? 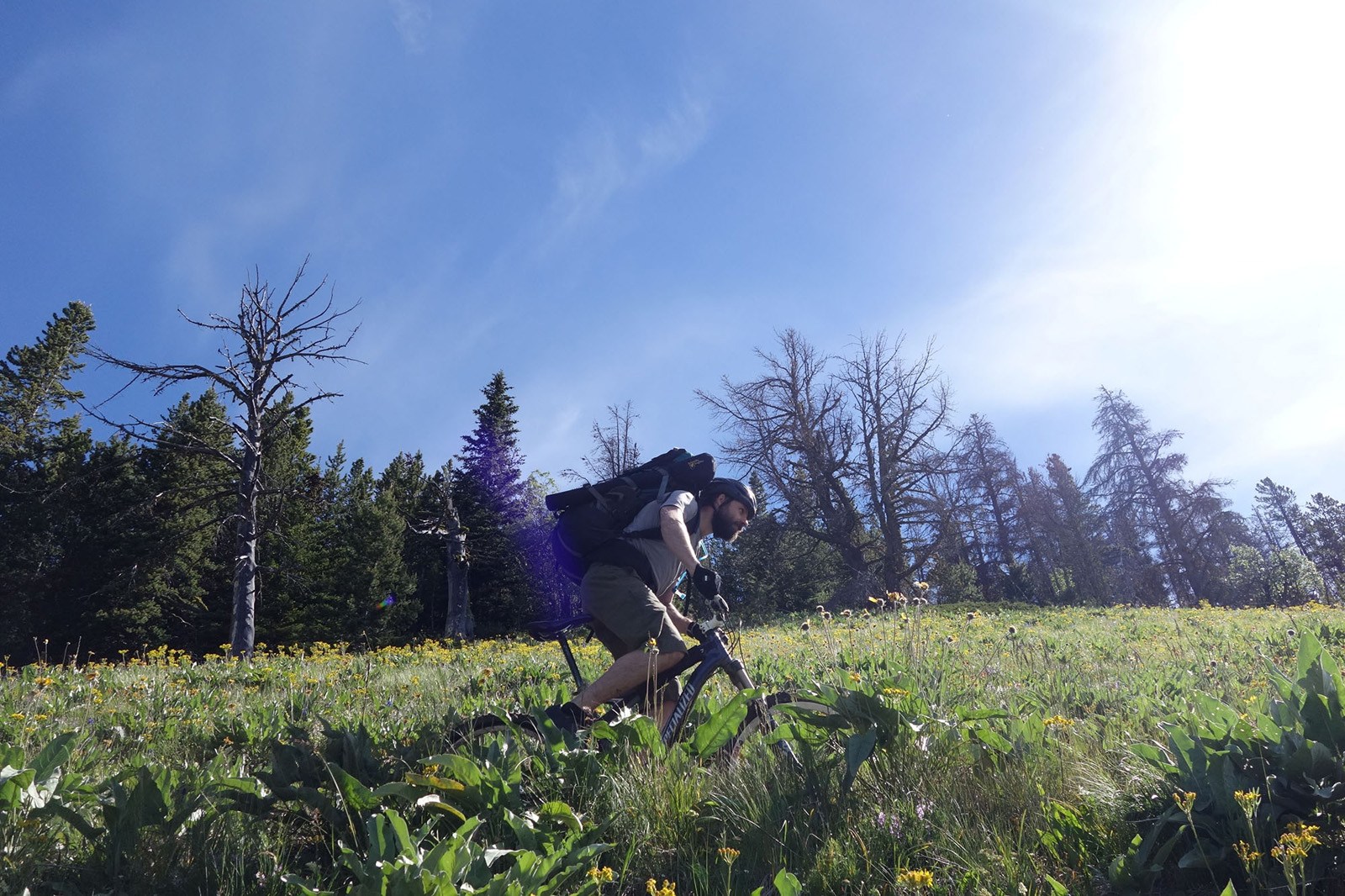 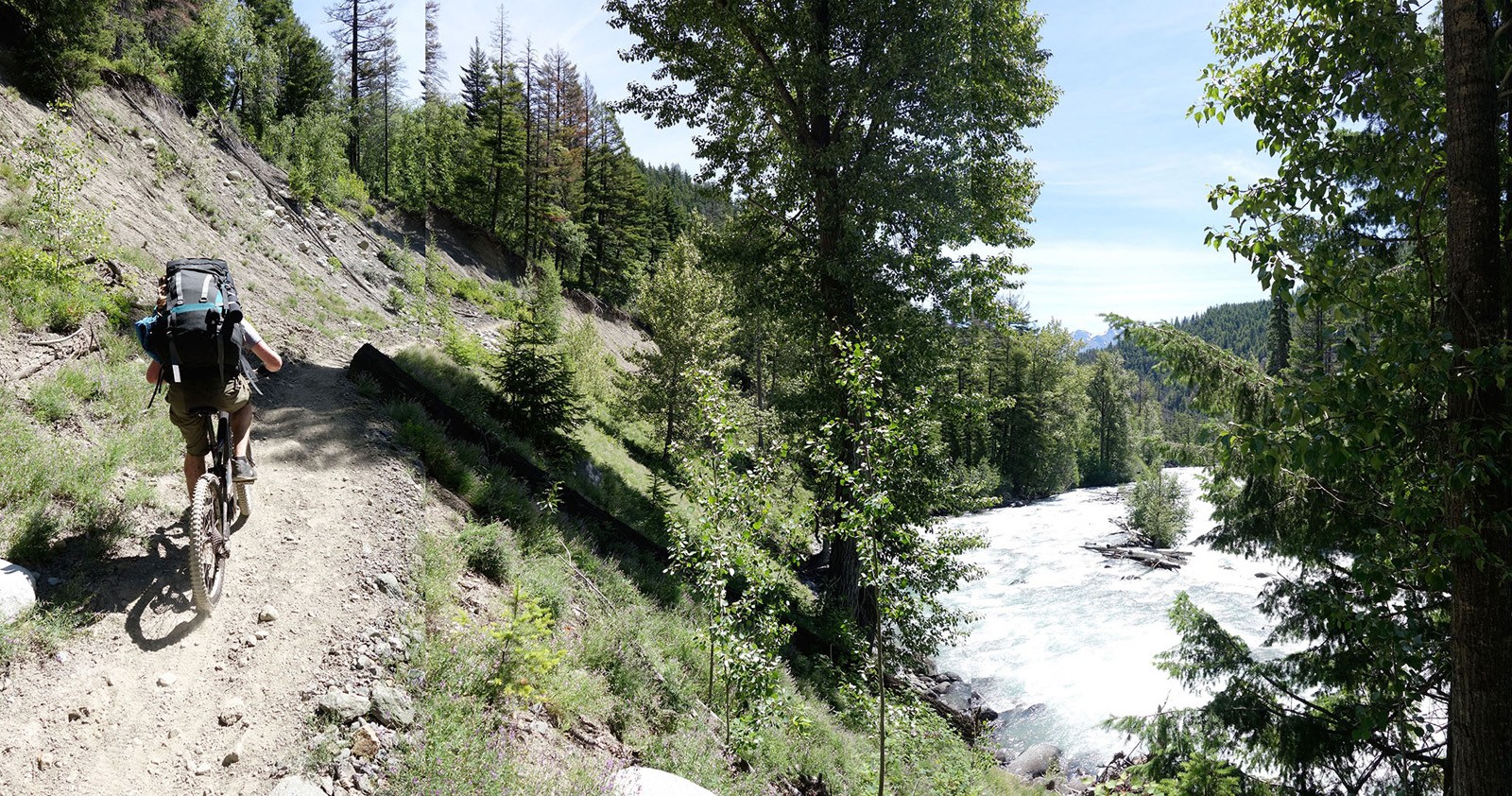 Having developed a healthy distrust of our own way-finding skills, we opted to play it safe and take it easy, stopping frequently to soak in the last of the wilderness vibes and session fun sections of trail, before following Gun Creek back to civilization. We arrived at the truck dirty and exhausted, but elated that we’d finally broken our Chilcotin cherry ­and damn sure it would take us less than ten years to come back. 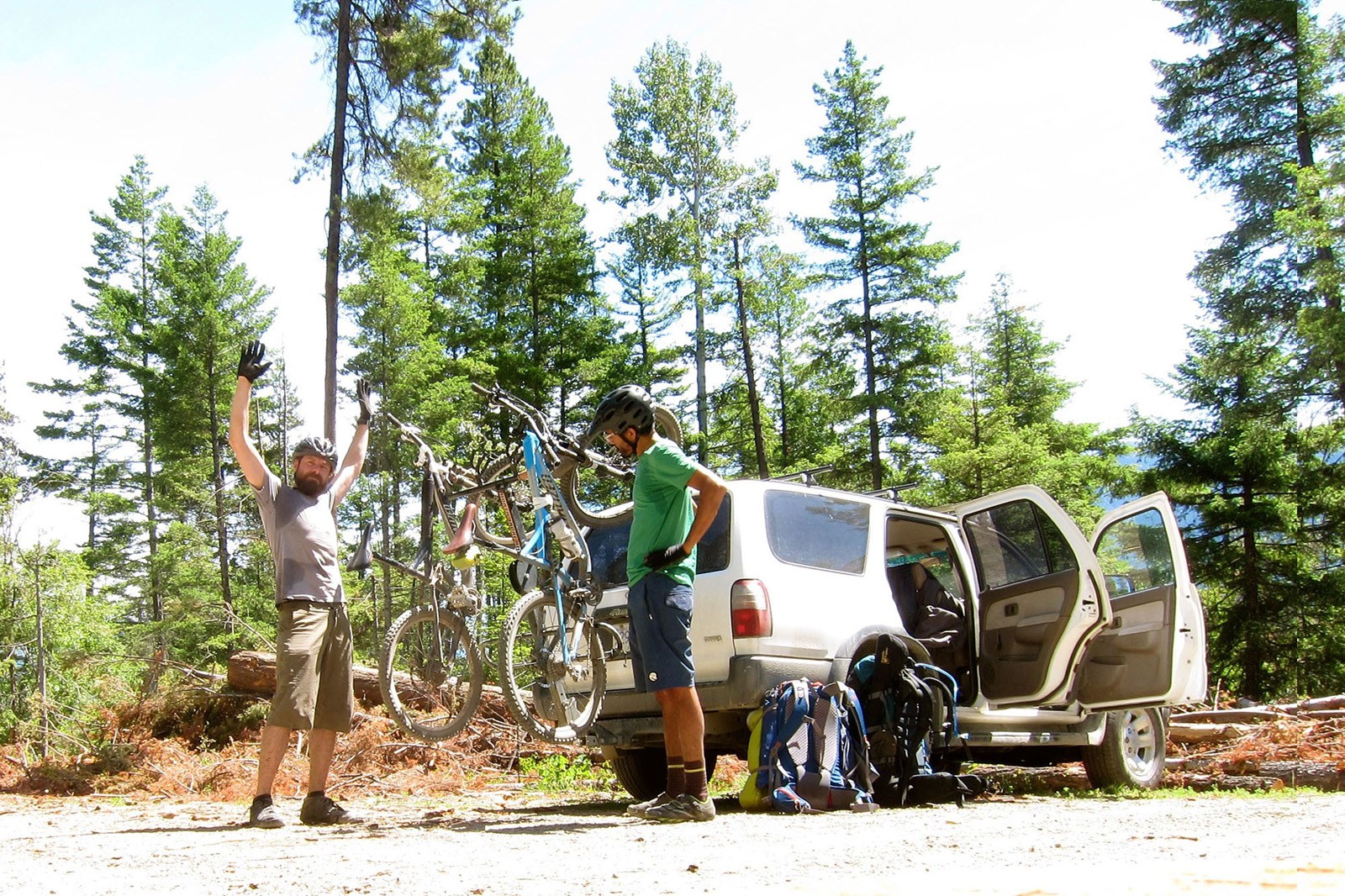 Too many female readers again?

I'm guessing it's a reference to the title. Is that right @OldManBike:disqus?

Everyone has a cherry. Why discriminate?

Next summer… With less dadbod.

Sweet pics. I'm not into fanny packs but I'm also not into 40+lbs of gear on my back while riding uphill at moderate elevation. Kudos to you for that but I'll happily pay for Tyax Air to fly my camping gear and food into a destination lake. Whatever you choose, the scenery and trails are amazing it's Trail bike heaven. Have done it four times and will be doing it again.

40 plus pounds of gear? you're doing it wrong.

compensating for personal feelings of insecurity through online demonstrations of backcountry elitism? you're doing it right

The most important thing is just getting out there and having fun.

I think most people would agree that the float plane doesn't save you much climbing as much as it allows you to start your route from a much deeper spot.

for sure. next summer i'd love to do a float plane drop a bit deeper in the area. but for our first time out, keeping things self-contained and geographically constrained worked well

Would you go the backpack route again or would you try bike-mounted options?
How much camera gear did you bring?
What would you do different/same next time?
Did you ever wish you were on a plus bike? 😉

personally i would run a backpack unless other gear was provided. for the minimal ammount of bike packing i do, i can't see the frame packs being worth the investment - both panniers (touring, grocery shopping, commuting, etc.) and backpacks (riding, traveling, hiking, etc.) are much more versatile, in life and on a trip

i've been back twice since this trip. both times i camped at tyaughton lake and did several day-trips. as i said, i'd love to do a float-plane drop next time, and ride out; or do a drop and then a bunch of loops within the range. but i could ride in and out again, too. depends on what the rest of the folks i go with are up for, i guess

i could see a plus bike being great if i was doing a longer trip further into the backcountry, on less established/maintained trails. or if i was going in the shoulder season, expecting to encounter a lot of different types of conditions (mud, snow, etc.). otherwise i'd just take my trail bike. the only bike i ever "wished" for during my time in the chilcotins was a superlight xc bike - or an e-bike, i guess! - on the climbs

"When in doubt, consult the map!"