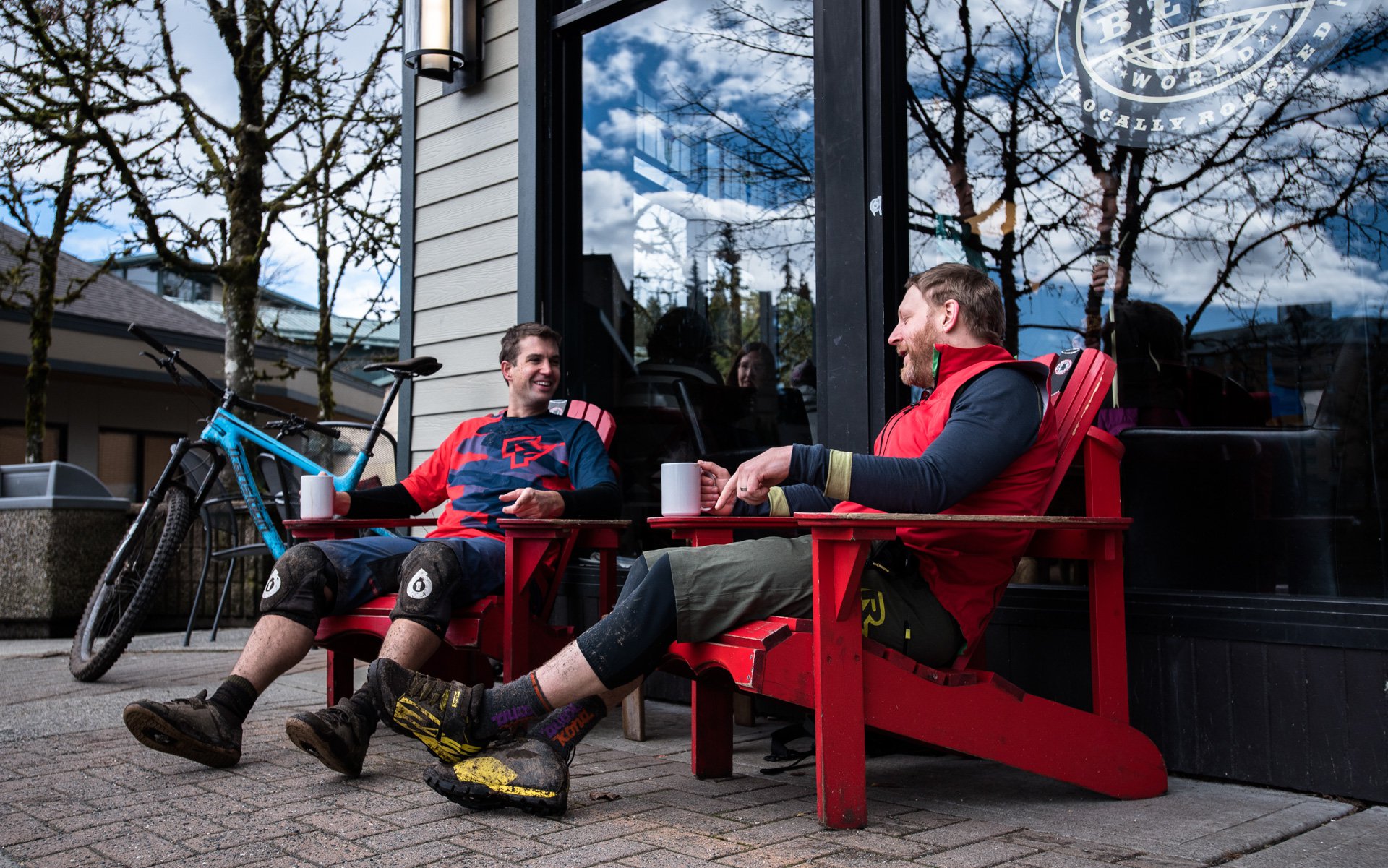 Cheers To The Institutions

Riding your way through the trails today
Takes everything you got
Taking a rest from all your struggles
It sure would help a lot
Wouldn't you like to take a break? 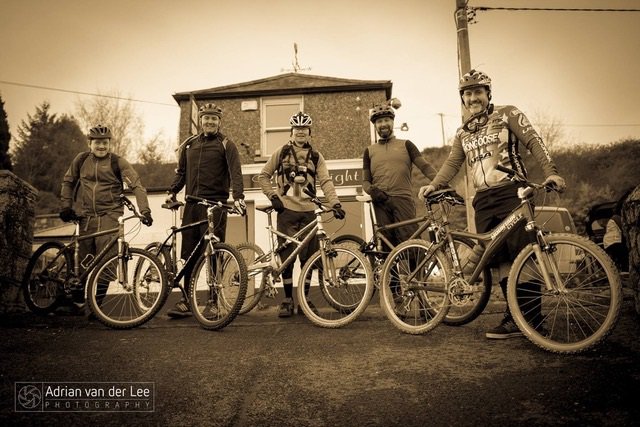 Classic 90's metal parked out front of The Blue Light pub in the foothills of the Dublin Mountains, Ireland. The start and end of infinite mountain bike rides. Photo: Adrian van der Lee

As much as I love Boeshield T9 on my chain I think it's fair to state that good coffee and good beer are the two best lubricants in the mountain biking. Over the years my gang has haunted a number of local establishments from the patio at Seymour's Pub, to Dageraad's picnic tables, to the Black Bear pub and most frequently Bean Around The World coffee shop in Parkgate Mall at the base of Mt. Seymour.

Places that have nothing to do with riding mountain bikes in and of themselves but by the twin circumstances of location and social potential have become institutions for local mountain bikers. As my friend Scott says, "If we're going to sit around and talk about the ride, or bikes, or anything else you would talk about after a ride, you had better have a coffee or beer in hand. It's just not efficient otherwise." 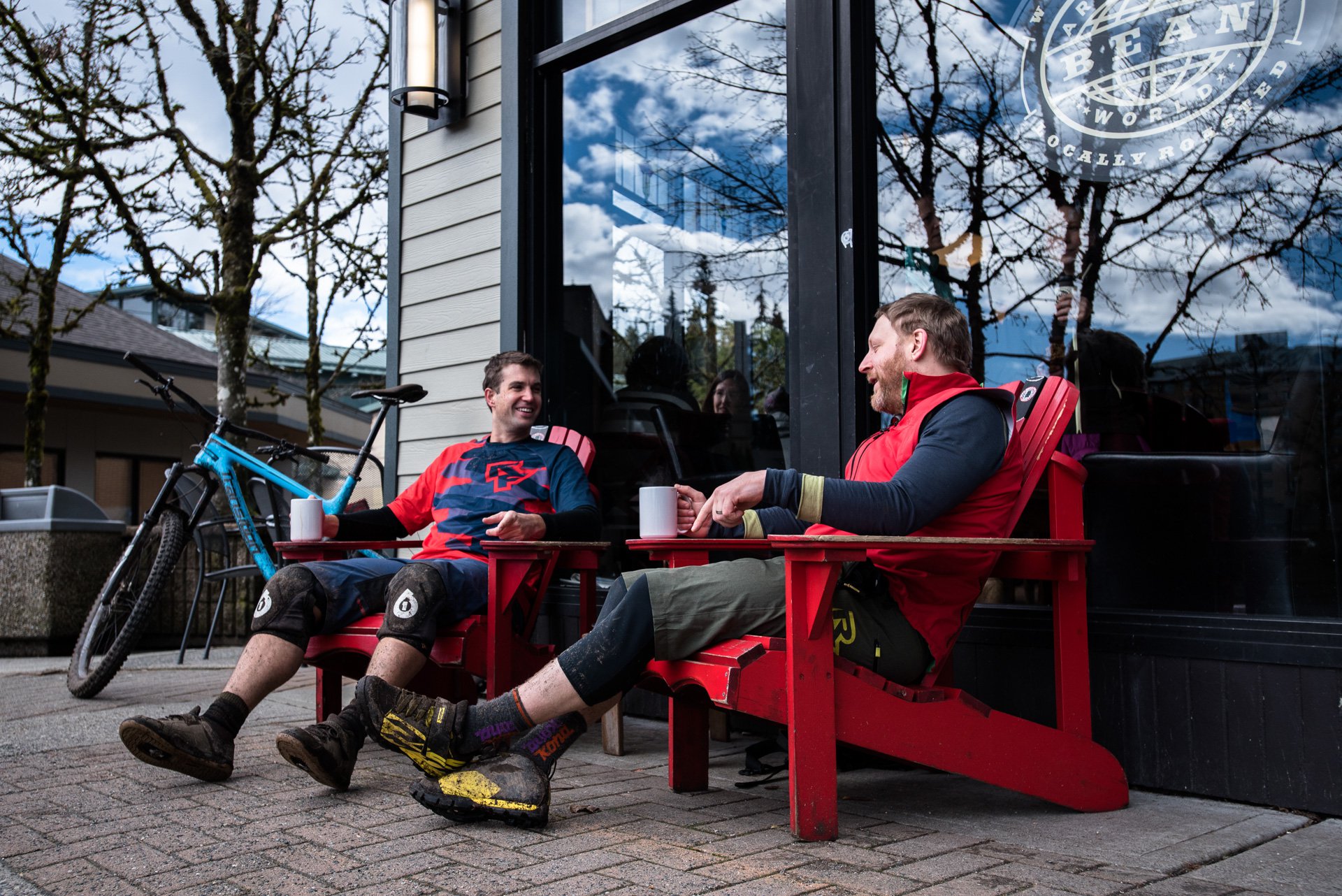 Tim 'Yes-the-Patrol-review-is-coming' Coleman and I having a post pedaling laugh at Bean Around the World - the start and finish of our ride. A huge number of riders came and went while we polished off a couple of Americanos including Scott, who was the impetus of this piece. Photo: Dave Smith

What Makes An Institution?

Of the seemingly infinite purveyors of beer and coffee, two spaces are legends in my mind. The aforementioned Mt Seymour Bean location and a pub in Dublin, Ireland called The Blue Light that I've never visited. What makes them institutions?

The way mountain bikers talk about them, think about them, and feel about them. The sheer amount of post-ride bullsh*t that has been smeared around their patios and inside their walls. Heck, the fact that they don't cast out the soaked, sweaty and stinking mountain bikers that darken their doors counts for a lot.

If we're going to sit around and talk about the ride, or bikes, or anything else you would talk about after a ride, you had better have a coffee or beer in hand. It's just not efficient otherwise." - Scott Pilecki, Rocky Mountain Bicycles

What other bar allows you to bring your dirty bike inside or sit on the bar stool covered head to toe in mud? The next pint of Guinness is always poured for you before you go to the bar." Paul McCarthy, Steed Cycles

The fact that the majority of North Shore Triple Crown rides I've been on - and that anyone I know has been on - start at the Bean, and before that the Lazy Bay Cafe in the same location, definitely means something as does the fact that Bean Around the World has long been a sponsor of trail building efforts on the Shore.

You can't sit drinking coffee for more than an hour on the weekend - at almost any time of year - without bumping into an approachable local legend headed out for the ride. Bruce Spicer, Andreas Hestler, Chaz Romalis, Wade Simmons, Brett Tippie, Dik Cox, Keith Stark, Jerry Willows, Kevin Calhoun and countless others... you never know who's going to drop by. 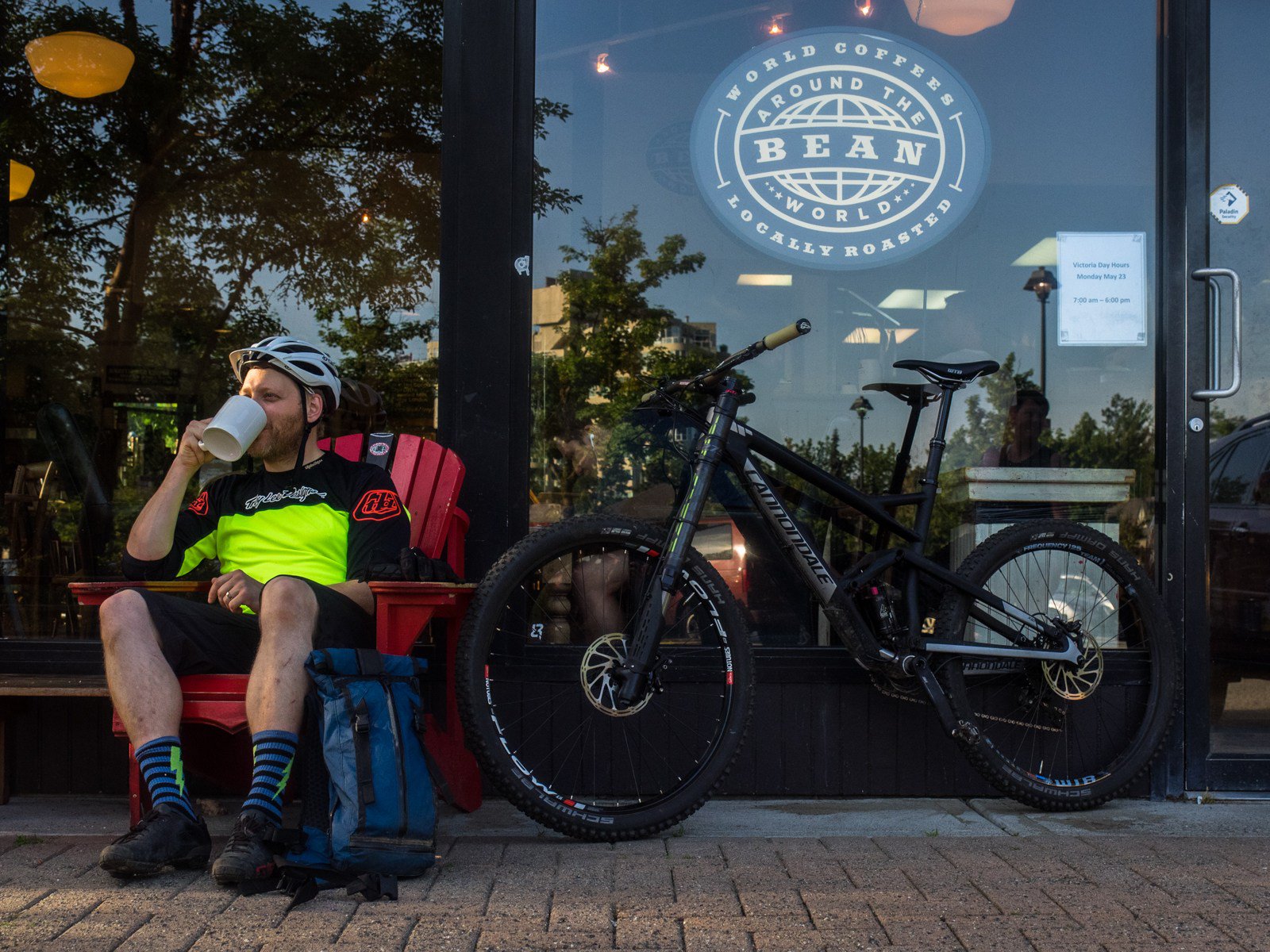 The Bean Around the World at Mt Seymour (Parkgate) isn't the most photogenic location... around the corner from the big red chairs is where all the mountain bikers congregate. Photo: Dave Smith

I seem to bump into people I know all the time. Finish a ride, drink a coffee, bump into someone I know. The next thing I know I'm off pedaling another lap of the mountain.

I've also met a few of my semi-regular riding friends from conversations struck up enjoying a post ride medium-medium in a big black to-stay mug.

We started one winter during university, and we were cold a lot of the time. The coffee at the end of the ride was the only thing keeping us warm as we felt like we had to drink it outside to avoid spreading dirt all over the coffee shop. - Scott Pilecki

Ask any Irish mountain biker about riding on the Emerald Isle and their tale is bound to include the "world famous 'Brock Stock'" which happens to be "the highlight of the year at The Blue Light." I'll let Paul explain: "it's a casual ride out with 200+ friends on the trails above the Pub. The main event of the ride is the Mass Start (Le Mans Style) race from the top of the mountain back to the bar."

If that level of support for local mountain biking doesn't suggest institution status then ask yourself "what other bar allows you to bring your dirty bike inside or sit on the bar stool covered head to toe in mud?" And heck, Guinness and grilled cheese is one of my favourite post ride combos. The fact that the next pint is always poured for you before you go up to the bar is just a bonus. 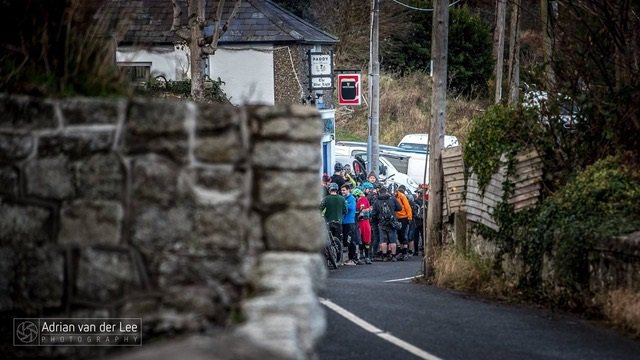 If its current place in Irish mountain bike lore wasn't enough of a draw, The Blue Light Pub is steeped in a tradition of "scofflaw" behavior. Named after an 1800's practice of dodging customs agents, it was a bikers' bar back in the day- home to local motocross heroes and TT racers before the local mountain bike community started holding court. 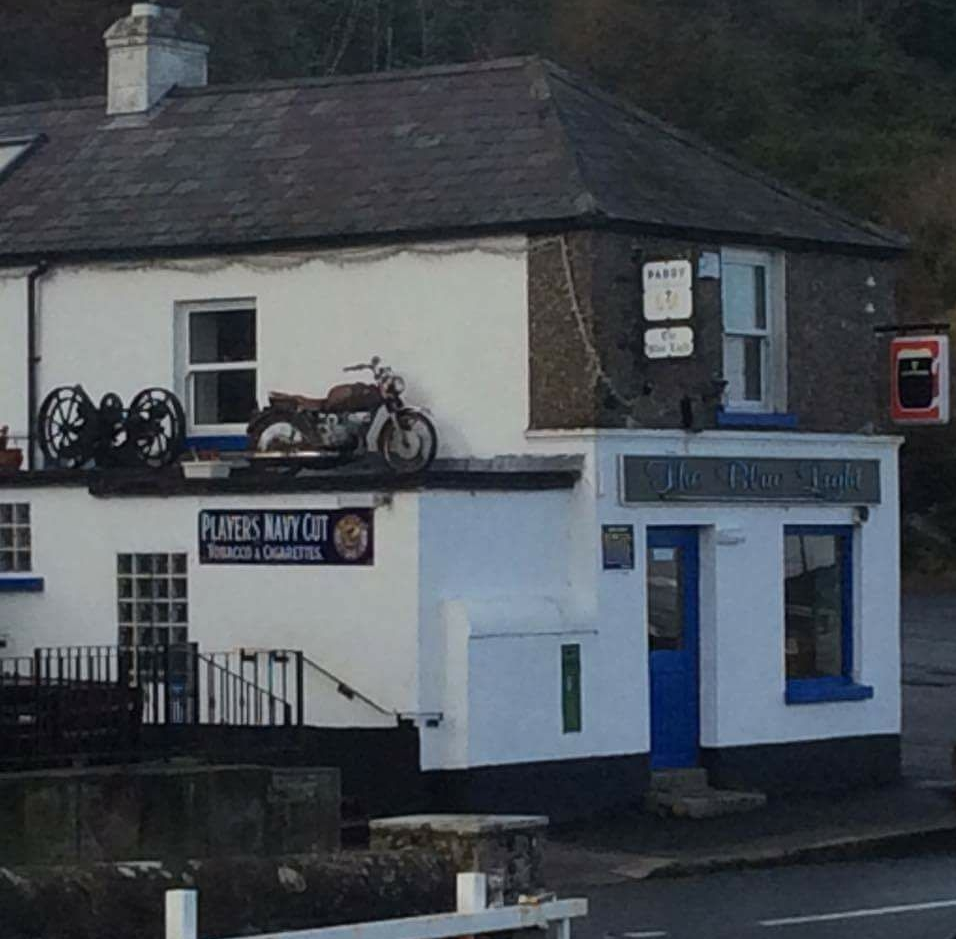 For me as a kid it was that bar at the top of the Mountain above my house. As I became of age to attend bars it became my go to after an evening of night biking in torrential rain. - Paul McCarthy

The reason I've heard of the Blue Light Pub is that every person I know who's ridden bikes in the Dublin Mountains has a story about the place. Usually one that invokes a smile or a laugh. I've been hitting the Bean for years and I'm writing about it after a long conversation with Scott about what the place means to mountain biking on the North Shore - I'd never considered it.

Whether it's the Love Muffin in Moab or Mission Springs in... well... Mission, it seems to me that wherever you ride there's at least one local where you are guaranteed to meet some fellow riders. It would be great to know the must-visit establishments wherever I ride.

We couldn't have planned trails on Teton Pass better if we'd tried - they all end at the Stagecoach Bar (the red building). Many a rider has gone back the morning after a ride to retrieve their bike, still leaning up against the hitching post in the lawn. Wait... I thought the Tetons were in Bellingham?! There's four right?

There's 'le grande tetons' [spoken in a bad french accent]
And then there's the Tetons, one of which happens to be the Grand Teton!

The Quad, you are correct. Not to be mistaken for a set of "gros tetons" though.

The Black Bear at the bottom of Fromme!

Culpeppers at the top of 10th Ave at about Trimble. We would stack our bikes on the sidewalk out front after a night ride around UBC in what was then The endowment lands. With sidewall generators and dim lights. So much fun. culpeppers had cider on tap I think. Underbelly rides in the 80's often ended up at Gladys's on 4th in Kits. Breakfast at 2 am was always good.

Now I guide Monday night rides in Whistler where we end up at a sponsors pub after. Similar vibe. But often with foreign visitors. Quite fun.

one day about fifteen years ago I was out for a solo ride at the Woodlot, and as I came out of lower Goldmine on to the road I came across a small group heading up. After some small talk I joined them for another lap. When we got back to the parking lot we all pulled out little coolers, a tight bond was formed and we have all ridden together ever since.Beers around a tailgate is by far my favorite institution. for the last little while a portable grill has been introduced to the mix. Grilled pepperonni and cold beer after a good ride,mmm...

The things that you can pull off at Bear or Woodlot that just don't happen in "the city"!

That was a great read for a rider that feels like living in the wrong area/space in time and in a country that does not really have this sort of mtb culture.

At least not in my area. I'd love to share a place that is like a 'writer's corner' back in NYC in the early 80s, but unfortunately even the notion of having a postride beer together seems really strange to a lot of riders over here.

Sounds like a quick trip to the North Shore (or Ireland) is in order!

The Shore is too far away and therefore too expensive at tje moment.

Given my situation I would love to....BUT. I'd rather spend quality time with my son in his ladt season before primary school kicks in.

sigh sorry Mic. Next time - whenever that is - you get across this way hit me up for a coffee!

Pete: I would suggest pre ride pepperoni will be present all ride. Experience tells me it's not a good idea.

It seems like I'm always maximizing the riding time I can get out of my break in the day, and have to rush off as soon as I'm done. As a result I have no local institution.
I think the institution in Saskatchewan is what made me so fond of the riding there though. Picnic tables and barbecues are in the parking lot of the main mountain bike spot, and sometimes the barbecues were as long as the rides.

I also really like your articles Andrew. Thank you for so many quality pieces.

Thanks Garrett; I really appreciate it.

I hear you on time. Since I became a dad I do a lot less post ride sitting around chatting... but when I do it's always with coffee or beer.

I'm in the same boat as Garrett. Maximizing the riding time. Basically since I became a father the pre ride coffee makes me really itchy. Don't get me wrong, it's nice to have coffee, chatting about bike stuff. But it's even nicer to actually bike.