What would you do with five days off? No worries, no responsibilities, just empty blocks on the calendar. You might take a vacation, or at least take a load off. I decided my time would be best spent trying to climb 10,000 vertical feet on a mountain bike.

Like all great adventures, my climb-a-palooza began with a simple action, and a wild thought. I had just stepped on the scale after a week off of the bike, and was rather alarmed with what I saw. After softly uttering an expletive, I made the snap decision to try and ride as much as I could during my upcoming break. 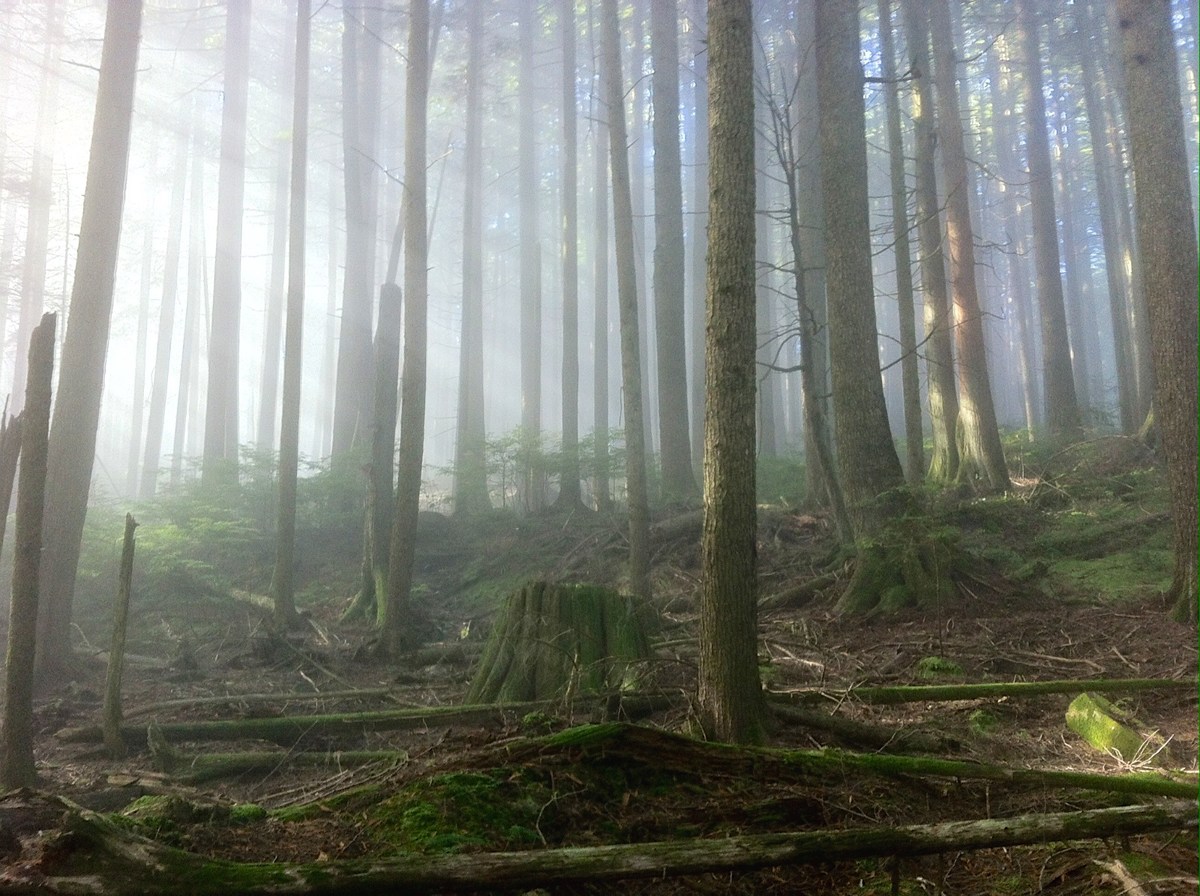 This is the type of weather I had reckoned would stick around for my entire week of climbing. How wrong I turned out to be.

After several beers and some back-and-forth with my housemates, I settled on climbing 10,000 vertical feet as my goal. The rules were simple: I had to hit the goal within a week, and all elevation gained had to be under my own power. Game on folks.

The first day back on a bike after an extended time away was a refreshing one. My legs felt great, the sun was out, and the trails were (mostly) dry. I wound up going as far as Pipeline on Fromme, and yahooed my way back out of the woods.

Day two rolled around, and I found myself with a little bit more lead in my legs. Thankfully, I ran into a pair of Kiwis (whose names sadly escape me now) and my friend Eli on the way up the hill. Cruising up to 7th Secret in a hailstorm, we soon encountered mechanical problems: Eli’s freehub completely seized, and he would make the descent down to Dempsey completely chainless. Tip of the hat to you sir. 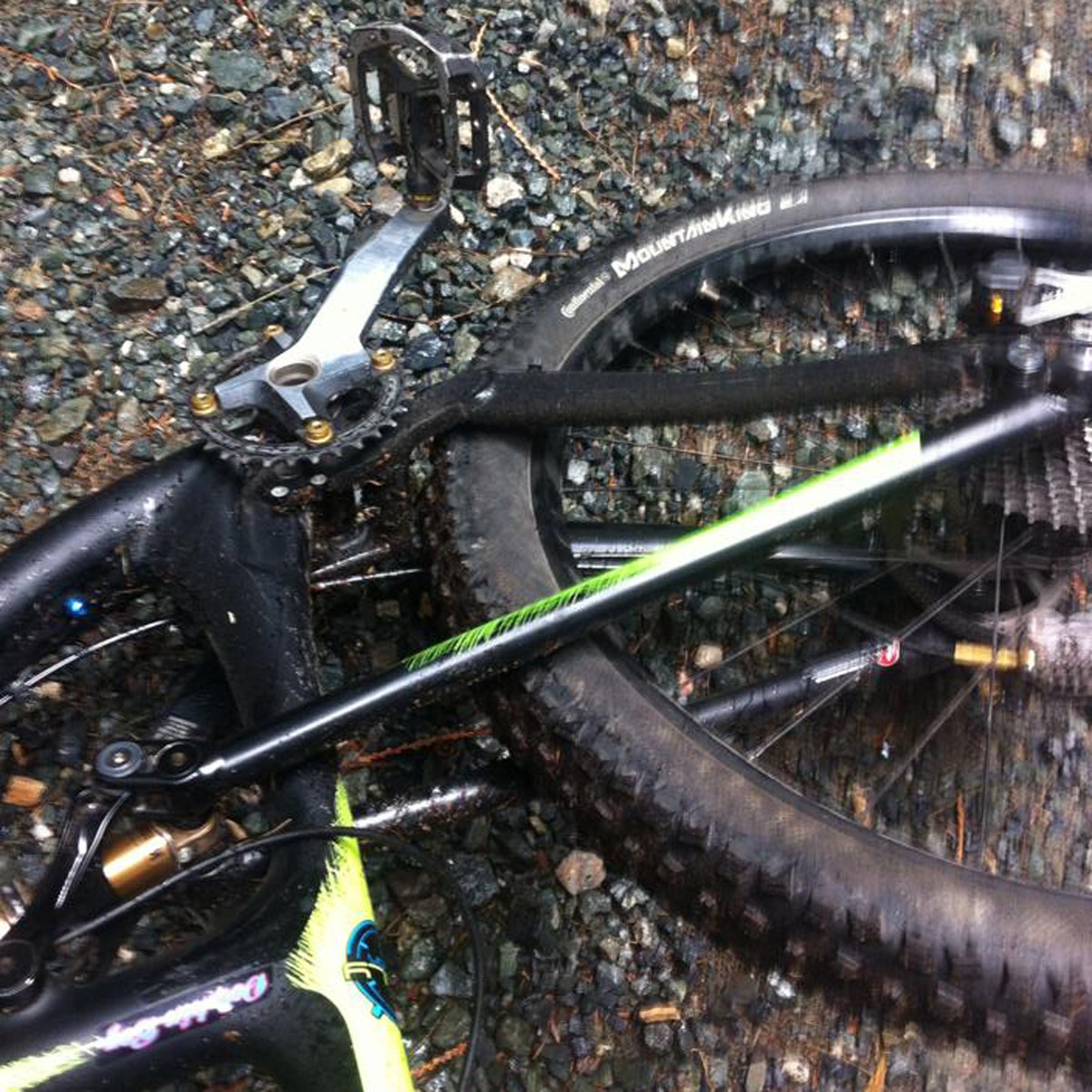 No chain? No problem. Photo by Eli Relke

That night, I received a boost in the form of a neon-blue Rocky Mountain Thunderbolt. Sporting 120mm of merciful suspension (when compared to the hardtail I had been riding), and designed to go up like a missile, it would make the next few days far more bearable with Mother Nature continuing to conspire against me. 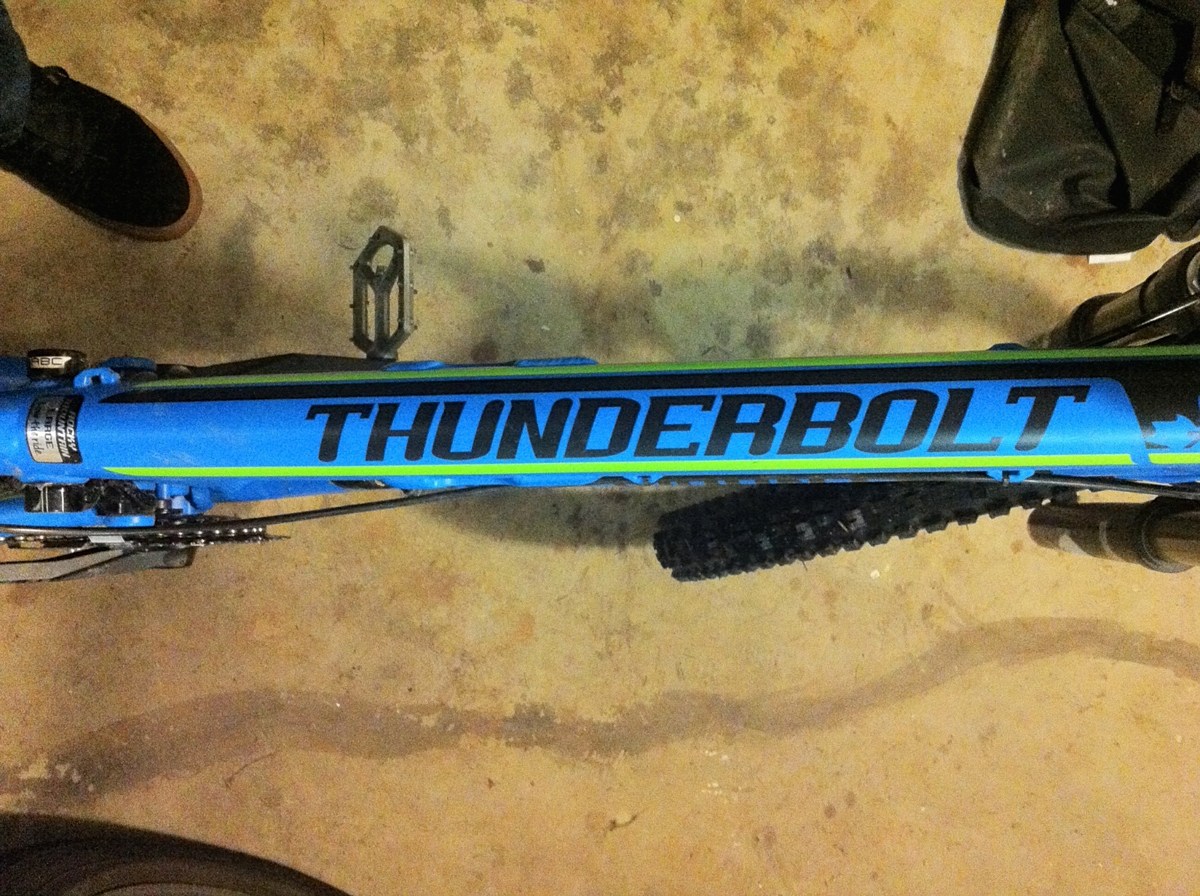 My dad always taught me to use the right tool for the job.

The following pair of rides would be textbook cases of misery; marked with cold temperatures, thick fog, and an unrelenting torrent of rain, I had no option but to suffer through. Lakes formed in my shoes, my hands turned into gnarled prunes, and my chamois rubbed me raw in all the wrong places. Still, the excitement of a fresh bike distracted me from the weather challenges for much of the climb, and the descent was, as always, enjoyable.

By the start of my fourth ride though, I was questioning just what the hell I was doing; Everything ached, my riding gear was permanently drenched despite my best efforts to dry it out, and even the Rocky was starting to show signs of wear. The grinding of the drivetrain ran in perfect harmony with the grinding inside my head. 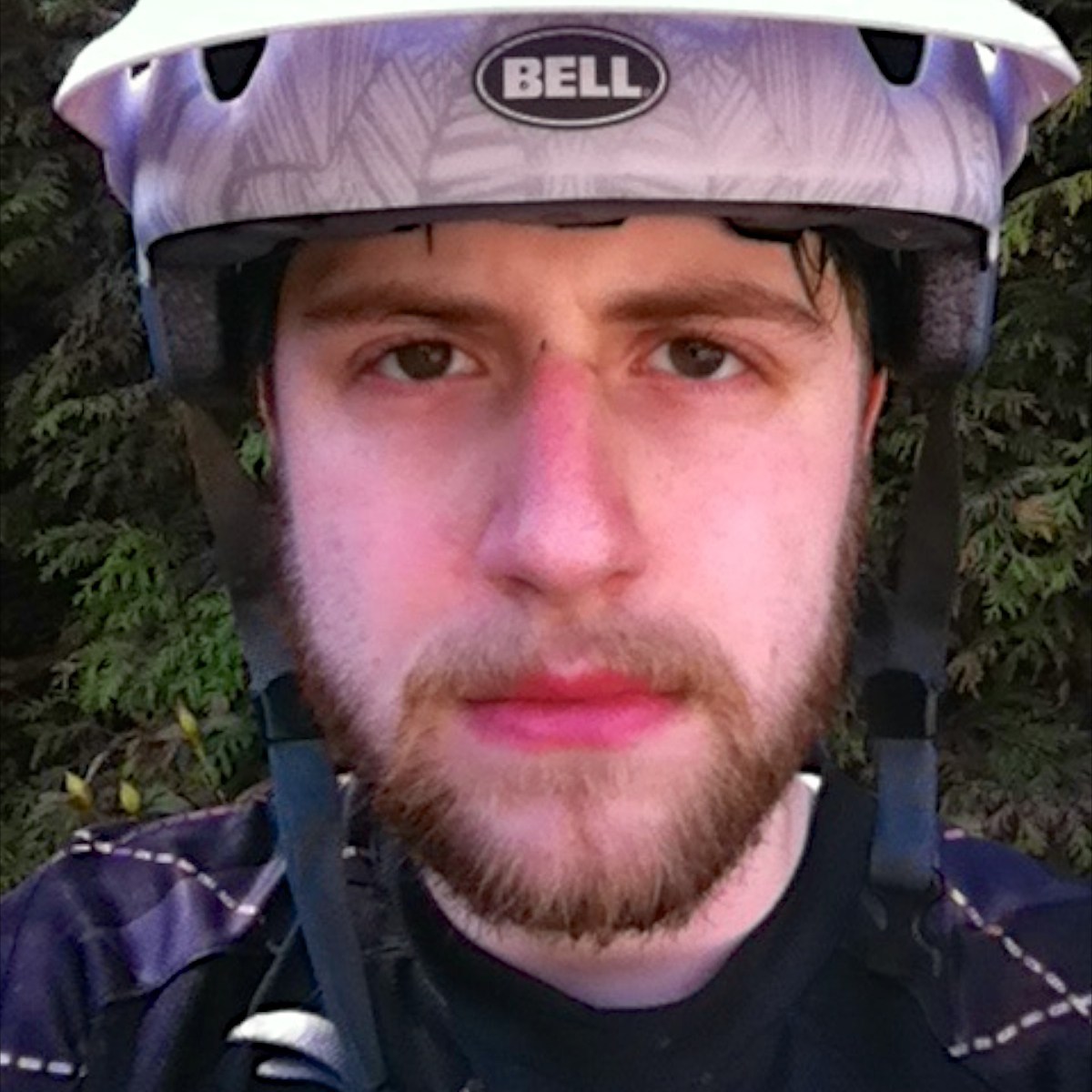 The not-quite thousand yard stare. If there had been another day or two of rain, I may have perfected it.

At the end of that sojourn, I was well and truly over riding. Legs wobbling like a newborn deer, I stumbled into the shower to wash away the layer of filth I had gathered on my descent, and sucked down a bottle of electrolyte water like it was the only thing separating me from the land of the dead.

If this were a movie, this is where the motivational music starts to play, and the main character has some sort of dramatic revelation that tells them it’s all going to be worth it. However, my life isn’t a screenplay (though I wouldn’t say no to a soundtrack) and as I collapsed into bed, I realized that I had changed mountain biking from something I love and adore into a damned dirty chore, like laundry or dishes. 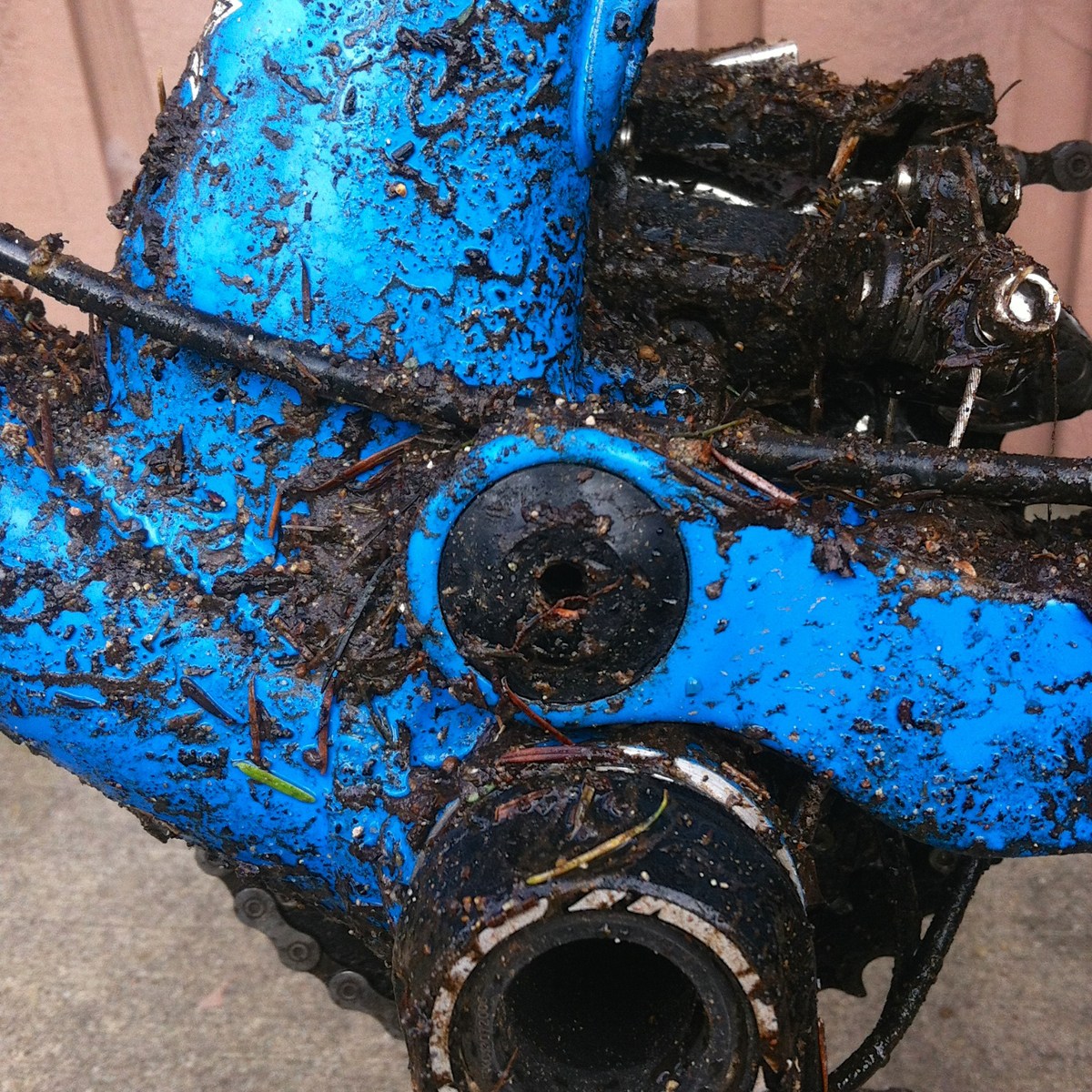 The grime was eternal. Impossibly eternal.

I was slow to get up on what would become the final day of my challenge. An 8:30am wakeup and plans to meet at 9 morphed into a 9am wakeup, and plans to meet up on the hill with friends who were feeling fresh. Moaning and groaning my way through the climb, I thought about just how far I had come both mentally and physically over the past few days as a few blessed rays of sunshine poked their way through the forest canopy. 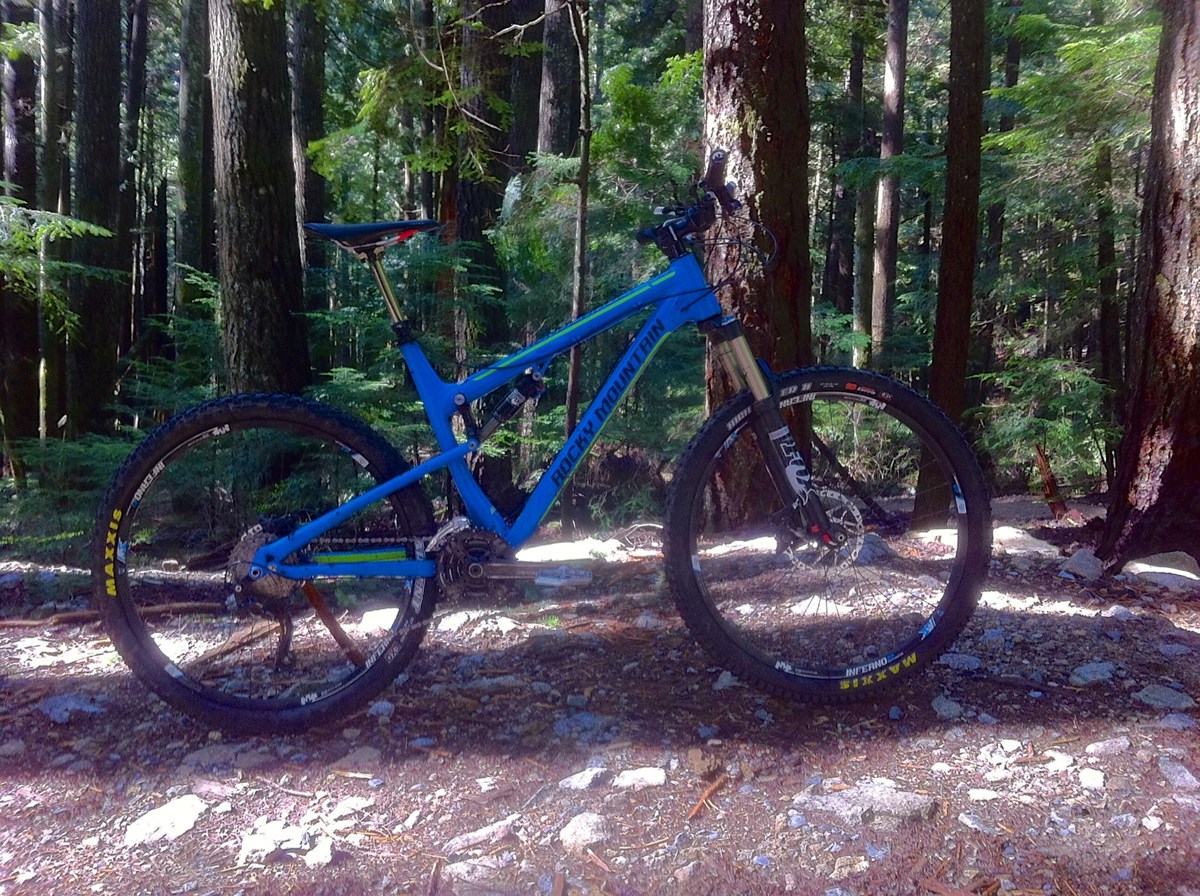 Even though I was mentally and physically spent, I still remembered to level the cranks and pedals for the photo. Wish I had remembered to meter the light correctly though…

My ride down wasn’t my fastest, not by a long shot. By that point, my mind and body were in pure survival mode. “Lets just get home in one piece,” they seemed to say. Finally, after one last slog up the service road and what had to be the loosest and sloppiest descent in history, it was over. The final total stood at 10,037 feet climbed over 46.8 miles (that’s 3060m over 75.3 km for those who use metric) in a combined time of 8 hours and 15 minutes.

Looking at the numbers now, particularly in metric, it really doesn’t seem like a lot: after some quick math, it works out to just over 600 vertical meters a day. With that in mind I had to start somewhere, and I managed to beat my deadline by two days. Given that this time last year I could barely climb two flights of stairs without being short of breath at the top, I reckon I can put that one in the win column.

The final totals for the week. I reckon I’ve earned a recovery day or two.

So, what did I learn after all that riding? For starters, I learned (the hard way) that doing something I love over and over again is a sure-fire way to wind up loathing it. I also learned where my mental and physical limits are, and wound up pushing their boundaries back just a bit further. I rediscovered the joy of the pain cave, and learned to embrace it.

Would I do it all again? Absolutely. While 10K doesn’t seem like a ton of riding in retrospect, the value of pushing the limits over more than just one ride can teach you a lot – and you might just want to aim a little bit higher next time.

Anyone else out there putting their limits to the test?

Congrats on the continued fitness improvements!

normally i would say turning something you enjoy into a dreaded chore is a terrible idea, but it sounds like it was for the greater good. hope this jump starts your legs matt, and sets you up for a season of sweet rides

Matt, what bike comp / app do you use?

I'm honestly just using my iPhone 4 and the Strava app. It's not the worlds most sophisticated system, but it gets the job done.