Today was serendipitous. It isn’t every day that you get to go for a ride with a 10 time World DH Champion – but today Fergs and I went for a pedal with Nico Vouilloz. We were riding the new 2015 Lapierre Spicy that he had a hand in shaping, giving us a bit more insight into what he looks for in a bike. 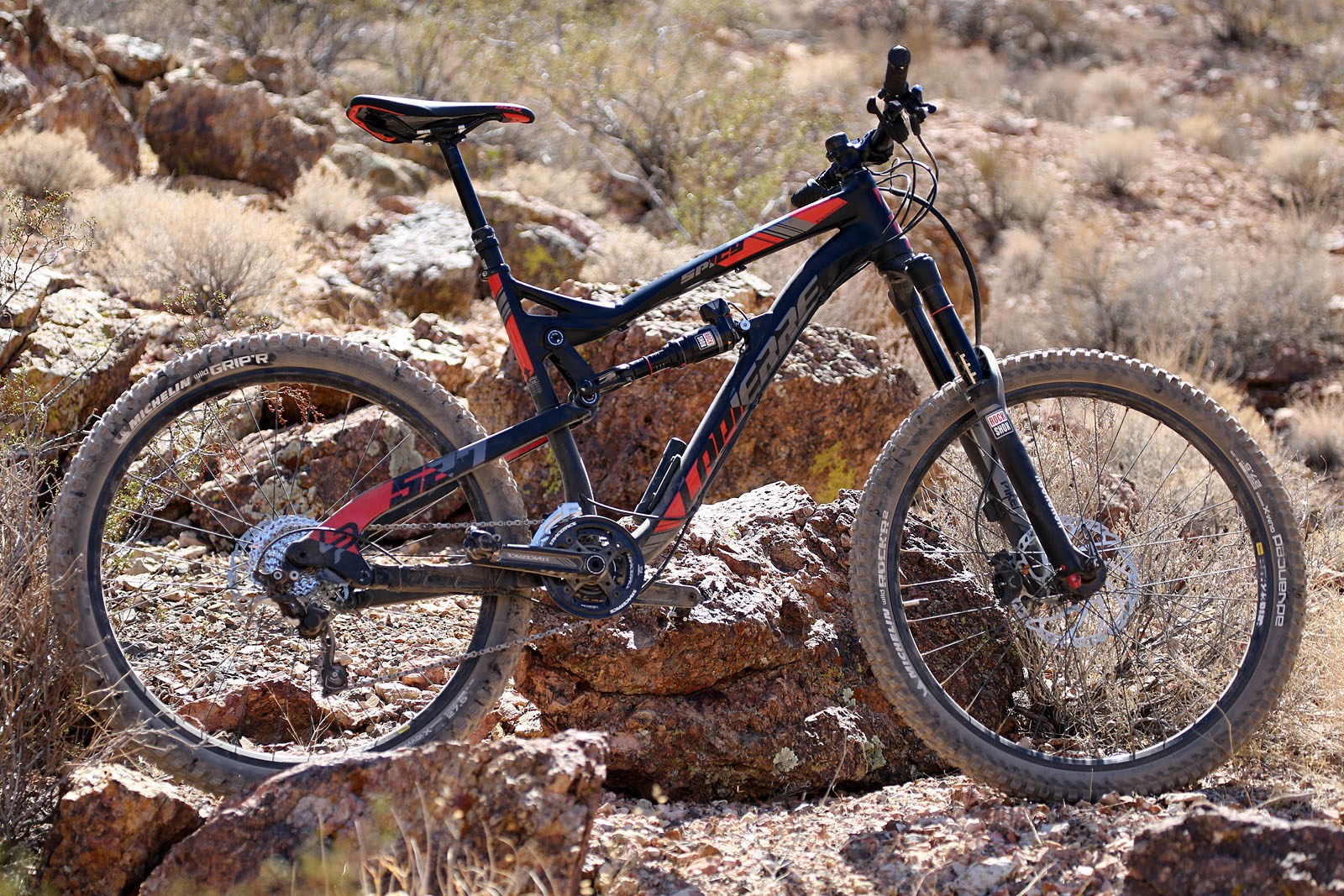 The Lapierre Spicy 527 soaking up some Nevada sun.

The Lapierre Spicy is a 150mm rear travel bike, rolling on 27.5” wheels and matched up with a 160mm fork. The Spicy is Lapierre’s – wait for it… Enduro bike! This is what Nico rides in the Enduro World Series. The suspension is an interesting combination, using a horstlink, but also a rocker to give the suspension a feel that’s closer to a VPP design. 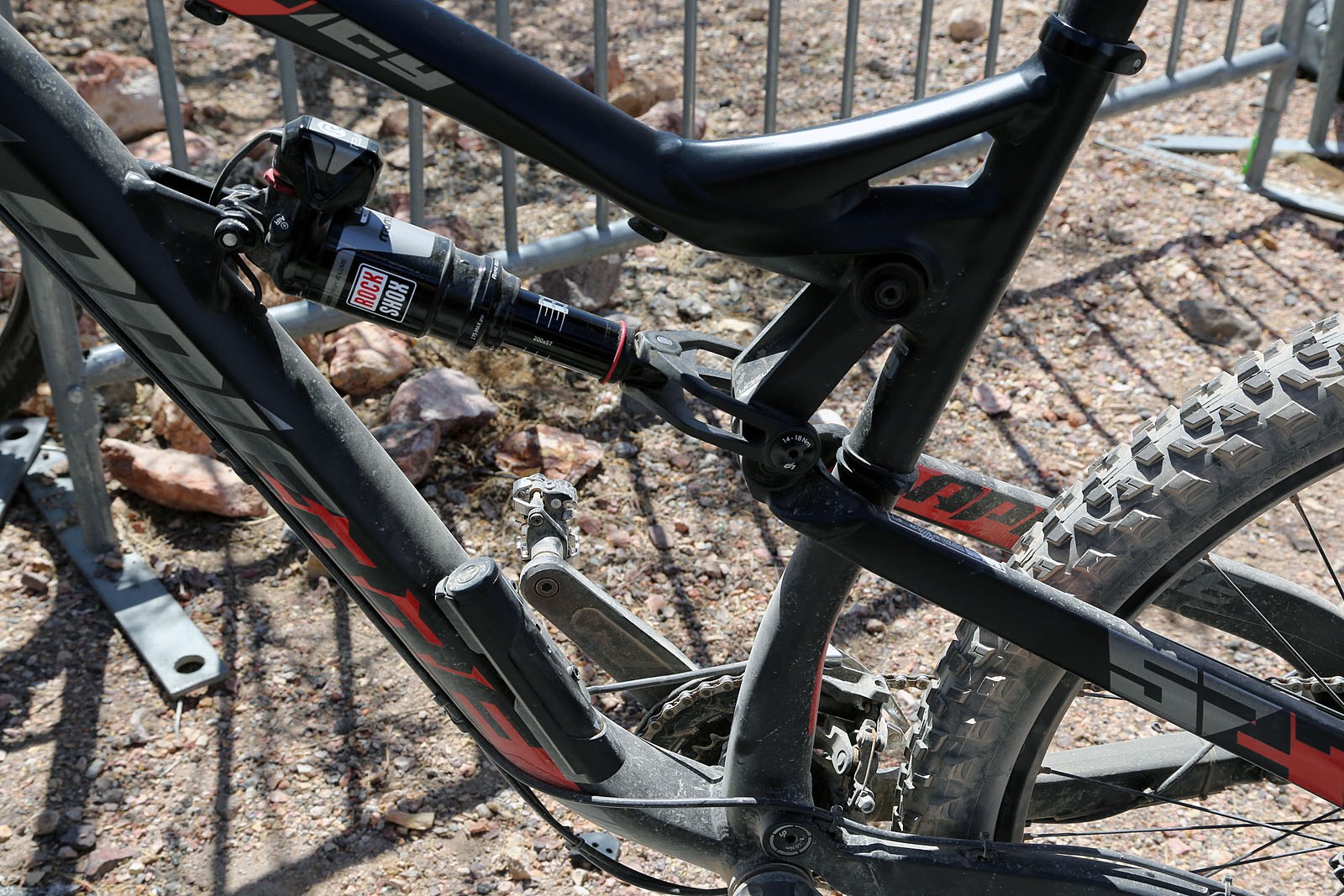 It’s obvious that something is going on with the Rock Shox Monarch with the E:I control unit attached to it. The slimmed down battery for 2015 now sits off to the side of the downtube making room for a bottle cage.

Lapierre has been pushing the boundaries with electronic control of shocks over the past few years and the new bikes see the latest refinement of the E:I Shock. For those not familiar with Lapierre’s E:I Shock Auto system, put simply, it senses what and how you are riding and then sets the rear shock modes to suit, picking between fully open, medium platform and locked. 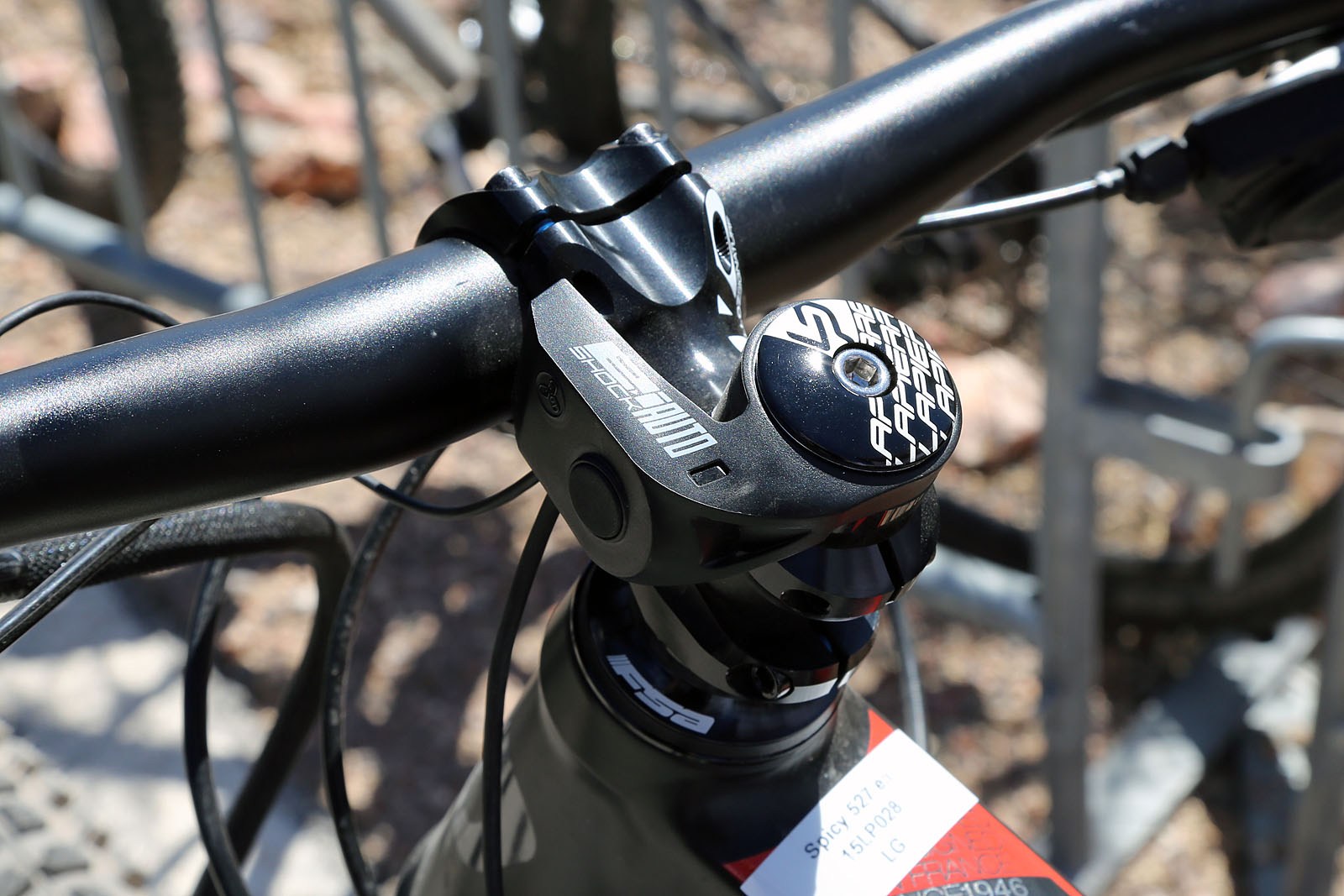 The new control unit is slimmed down and sits to the side of the stem making for clean lines on the bike. This change was made in direct response to customer input.

The refinements to the system this year include a much simpler and sleeker control unit, sitting next to the stem out of the way and to some extent being barely noticeable. The battery is now slimmer and sits on the downtube to one side, allowing you to run a bottle cage if you swing that way. 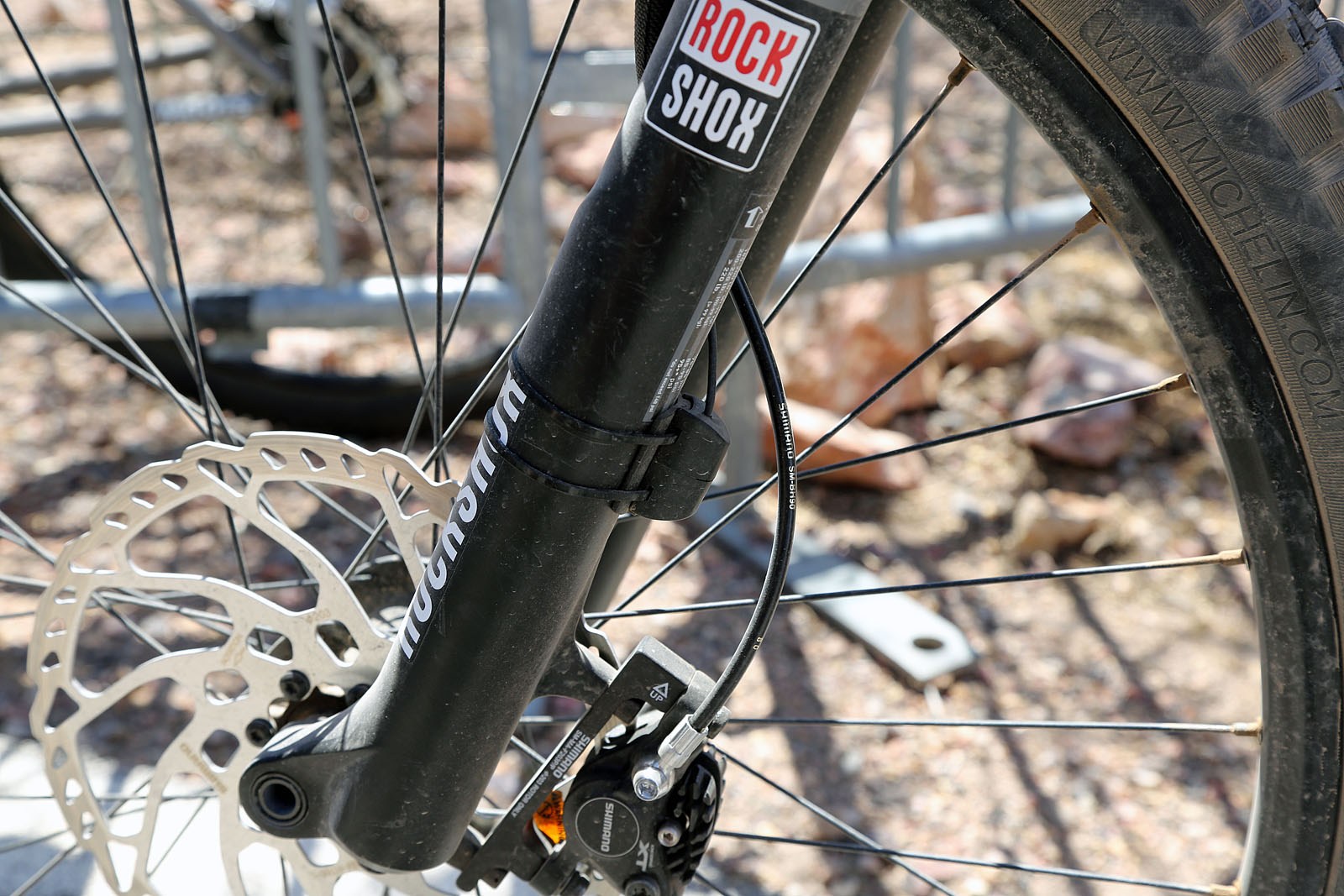 Tucked away on the back of the fork leg is one of two accelerometers that the system uses to sense the terrain, when it feels a large bump input at the fork, the rear shock is set to run in fully open mode.

The shock control unit takes data from three sources; two accelerometers, one on the fork and one on the stem, and a cadence sensor. The accelerometers sense impacts to the fork and, over a certain threshold, will take the rear shock from giving a firm climbing platform to fully open. When the cadence sensor notices you have stopped spinning the pedals it opens the rear shock because it assumes you are about to head down hill. All that data is processed in one tenth of a second, the time it takes for the back wheel to arrive at the bump the front wheel just sensed at 36 km/h.

On the trail it is immediately apparent that something different is going on with the rear shock. As soon as I stood on the pedals to accelerate and start climbing I felt the rear shock firm up, with none of the normal squish that you’d expect. Once you are seated and starting to climb some technical sections a small click from the shock tells you that the shock has changed modes to the medium platform, giving you the traction needed to work your way up and over knobbly sections of trail. 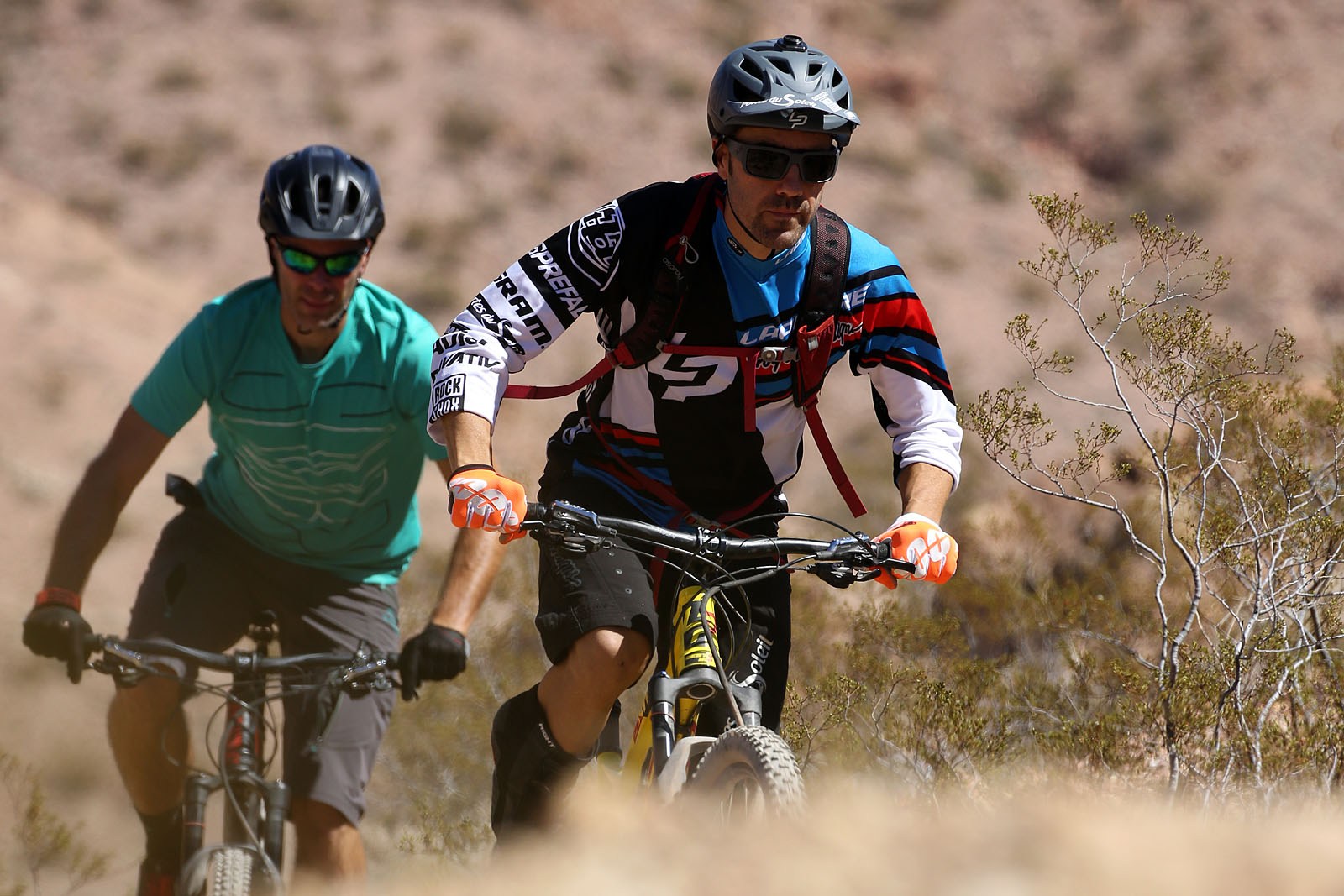 One of the few times I let Nico lead me up the climb. Having the suspension firm up when you need that extra kick of acceleration on a climb initially feels strange but you soon realize how beneficial it is.

Given that I had Nico breathing down my neck on the climb I was thankful for the system. When I needed to put in short bursts of acceleration to get up some of the steeper and technical sections the added firmness was a real advantage . There’s nothing more intimidating than hearing the crunch of tires over dirt behind you when you know how well that man can ride.

At the top of the climb I decided to let Nico lead because I wanted to watch him ride. Nico was taking it easy because of an injured hand but you could still see the bike dance below him. He churned some of the rougher sections of trail into butter as he doubled over gaps and rocks. Impressive to witness in person. 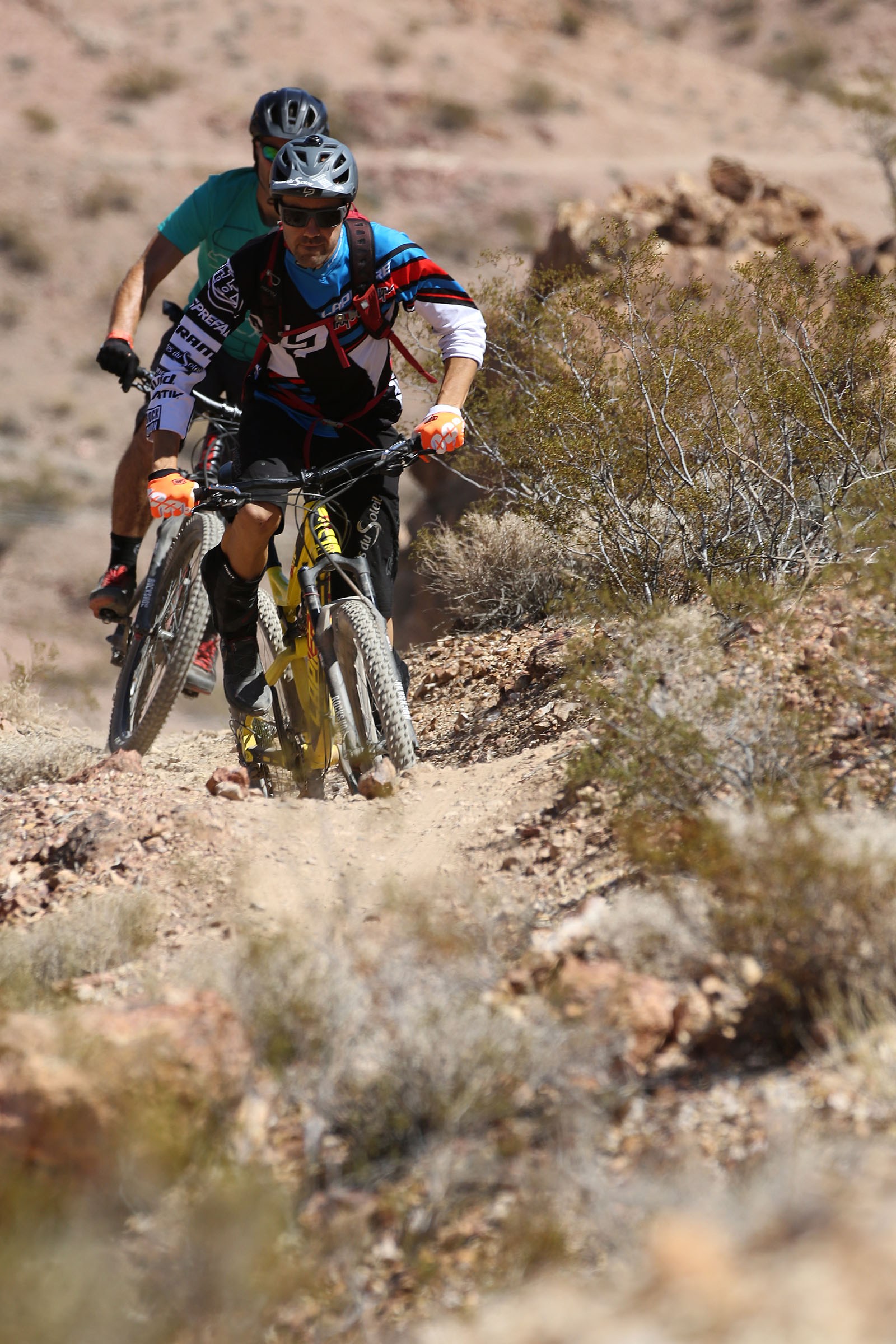 Nicolas makes the bike dance beneath him as soon as the trail points down, smoothing out sections of trail that I clattered over.

The Spicy felt good on the downhill, with the shock fully open when cruising, but then firming up to the medium platform on the flatter sections where I was putting in some pedal strokes. At first I was surprised by the lack of squish when I stomped on the pedals, but by the top of the climb I had already come to expect it. This is the hallmark of intuitive technology.

I rode the Spicy 527 which features an aluminum frame and is built up with a Pike, a mix of Shimano XT and SLX, Mavic rims and Michelin tires and retails for $4800 USD. The hop up to the Spicy Team sees the front triangle change to a carbon version and a full SRAM XX1 groupset and SRAM wheels for $8500USD. There is also a Spicy 327 that retails for $3500USD but doesn’t feature the E:I shock system.

We are going to get some more time on the Spicy on our home trails as this quick taste has made me intrigued as to how it will perform on the rooty rocky North Shore.