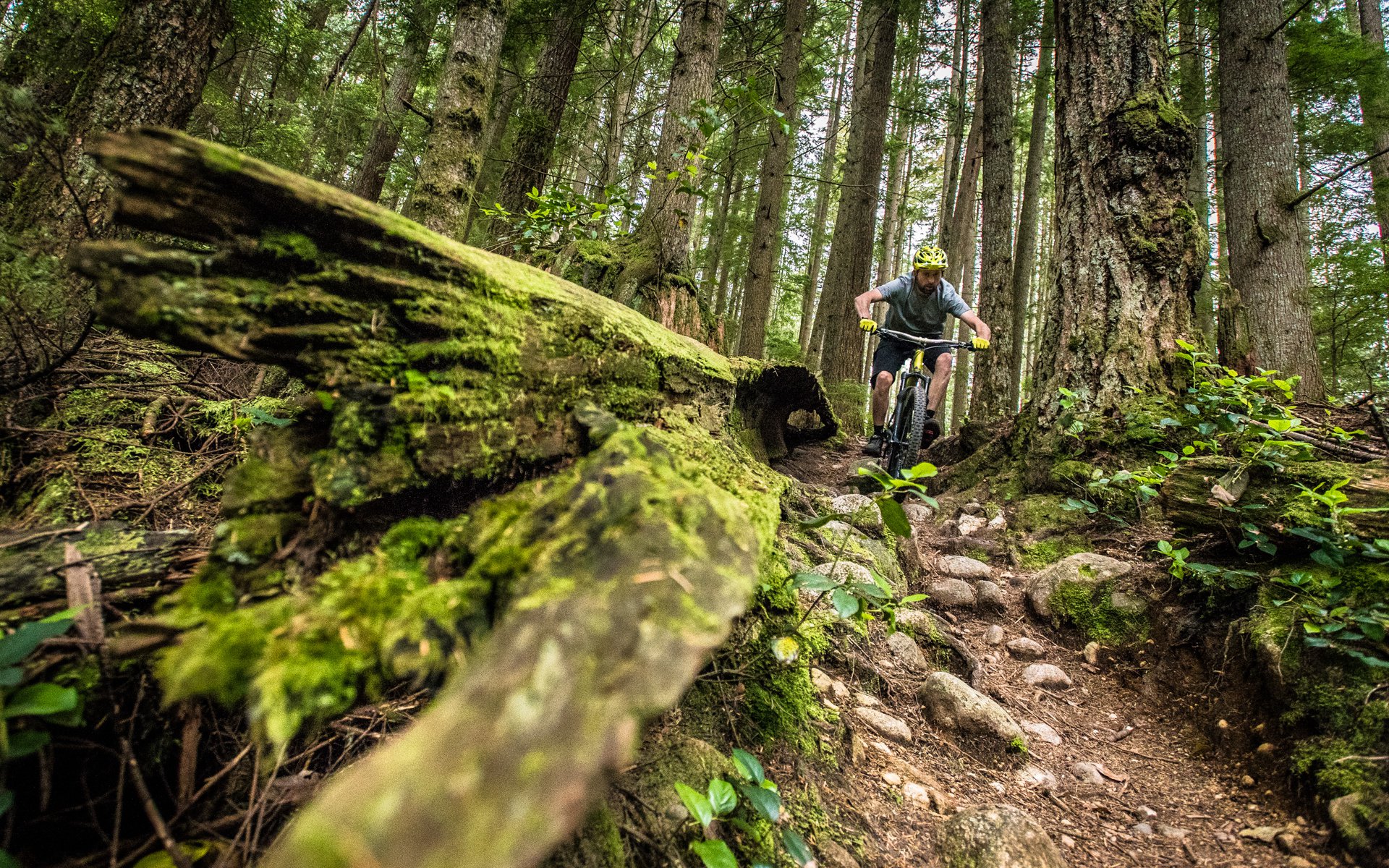 A few years ago, I was at a product launch for another European brand. I was sitting down, drinking beer with some of the Engineers and Product Managers and I asked them what they thought of some of the direct sales companies, and I used YT, who seemed to be gaining steam in North America, as an example. The response was a bit unexpected. To paraphrase, it was along the lines of “YT? I don’t know much about them. But Canyon? Canyon scares the hell out of me.”  Turns out there was yet another thing from Europe that us North Americans are missing out on. And I started to pay a bit more attention to what Canyon was up to. 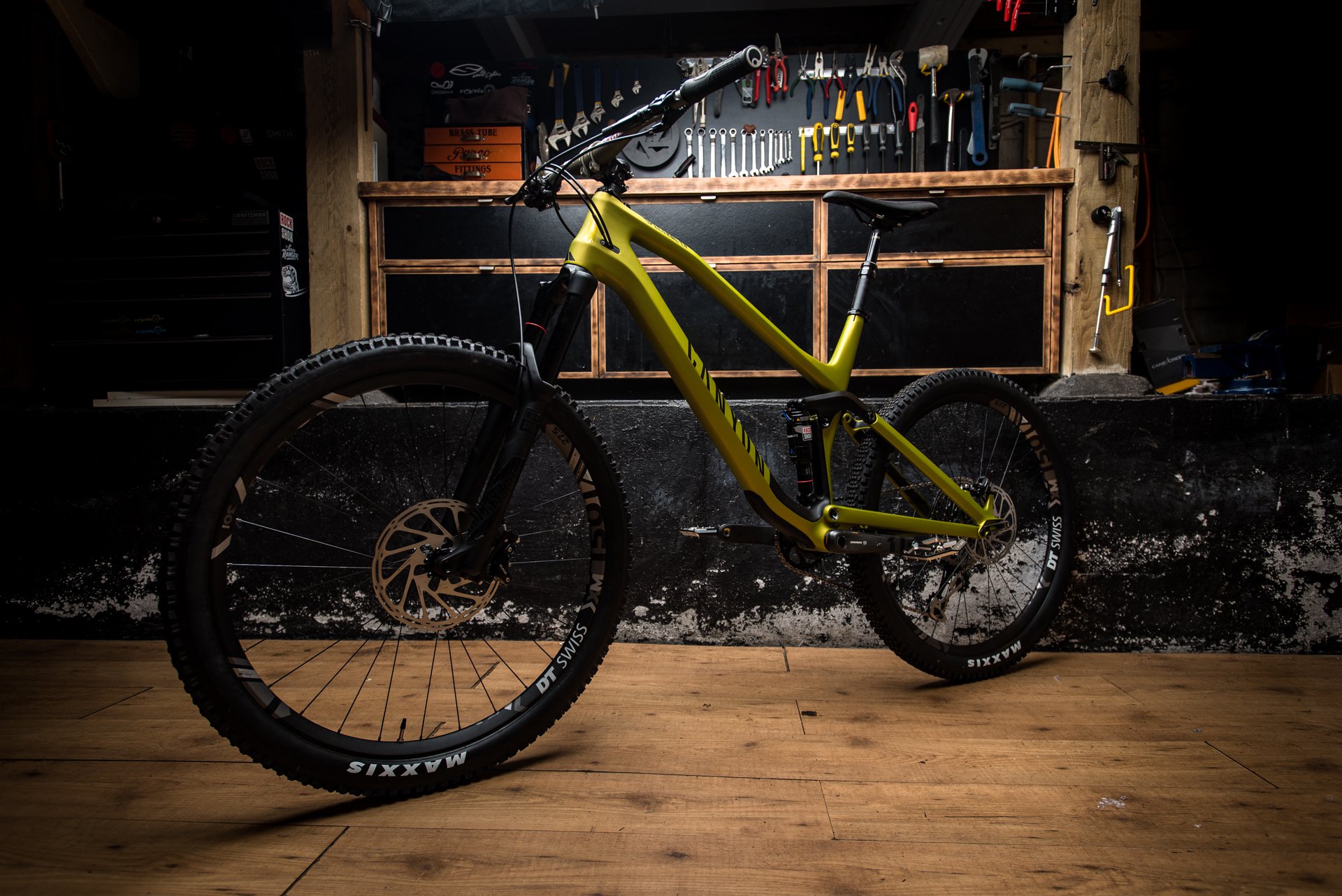 Carry around your own fancy lighting rig to ensure the bicycle makes the correct first impression.

Which is a fine and dandy thing to say, but until the Sender rolled around, this extra attention never caused me to get very hot and bothered. The Spectral (and the Spectral CF 9.0 EX that you see here) has been around for a few years now, and is one of the bikes that I was a bit blasé about. It always seemed a tiny bit weird in photos. The kink in the top tube seems a bit off, and the dog-legged rocker link spoils what remained of the party. But these impressions quickly become moot in person, as the Spectral is a fairly handsome bicycle in the flesh, and I quickly started to come around to it. 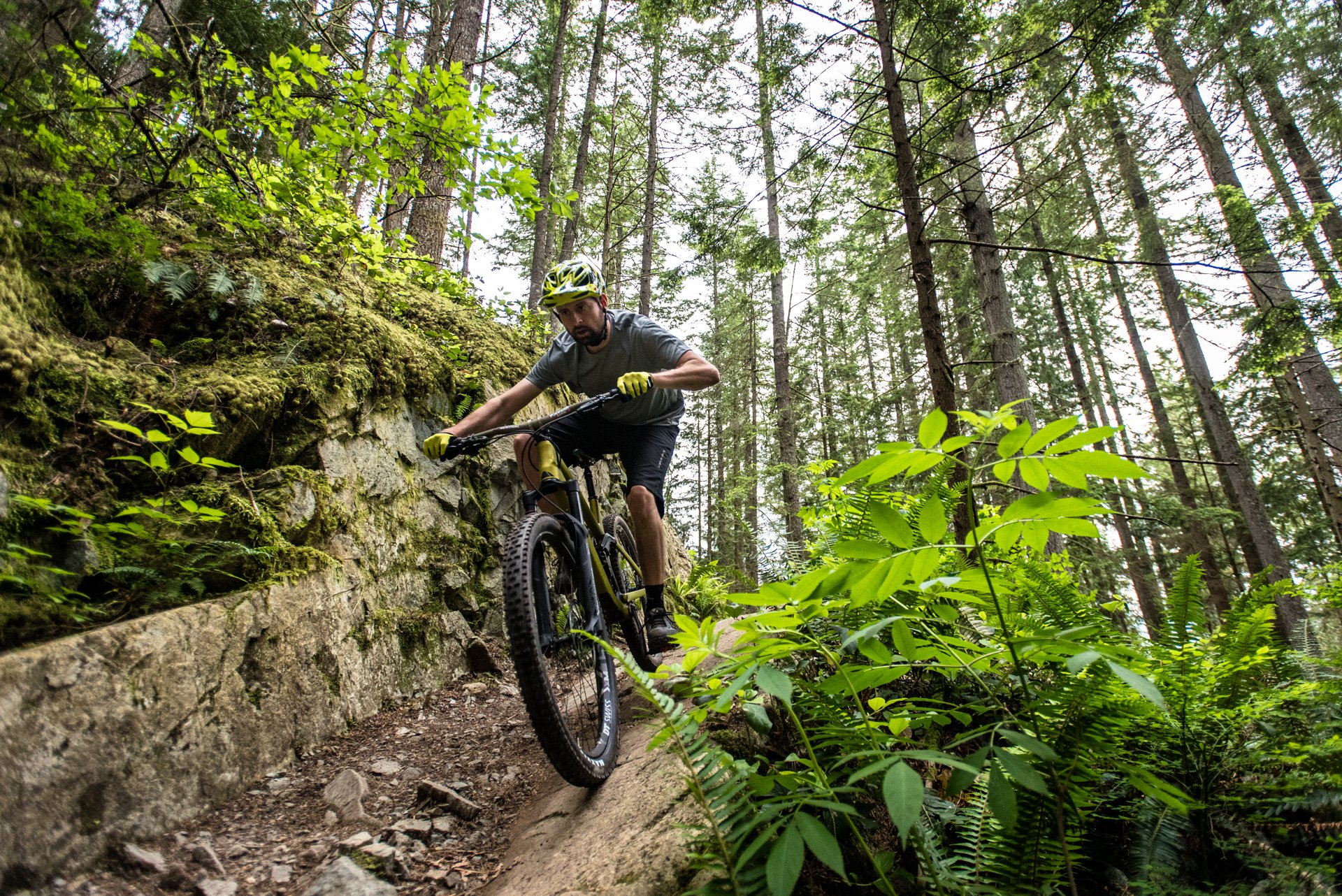 Pick a line and you'll probably hit it.

More than that though, this bike is impeccably finished. There are some amazing little touches that make a big difference. Start with the “knock block” style steering stopper. Trek made a big deal about this with their launch last year and Canyon has quietly played along. Move back on the bike and things are just as cleanly detailed. The cable ports are nice and even the chainstay guard is a neat little piece. This Canyon certainly will not leave you feeling like you’ve cheaped out by ordering direct. 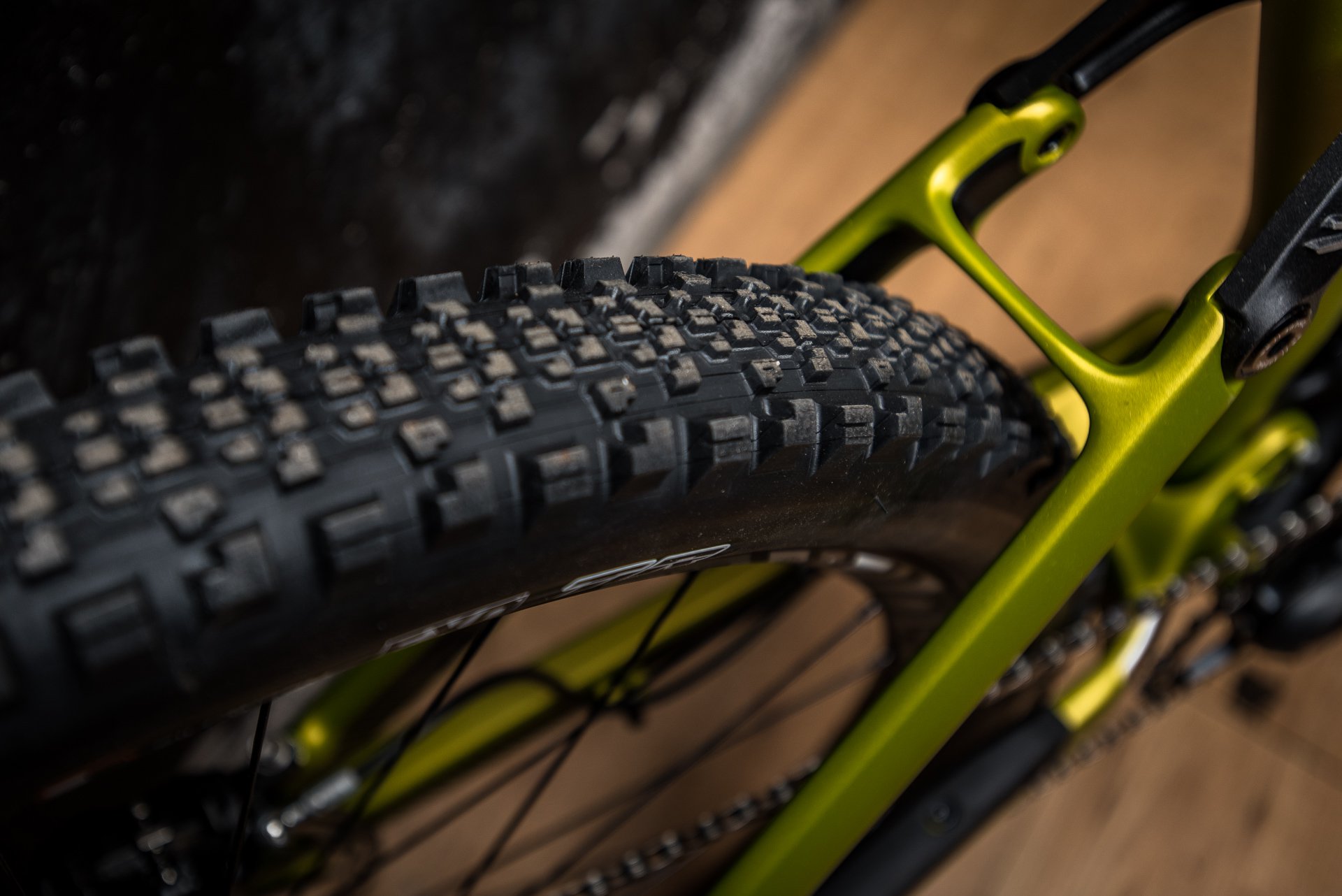 A non-meaty rear tire, and not a whole lot of spare room to make way for something fatter.

The wheels are nice units from DT, non-Boost on both ends. If you've got a roomful of non-Boost wheels, this may be a benefit, but those worried about future compatibility might see an issue. But no matter the hub, tubeless setup was a breeze. The rims come pre-taped, so just throw in a valve and some sealant and they pump right up (and held air for weeks). And these suckers ran true, no matter what I threw at them.

(For more on the spec. and geo. of the 150mm front/140mm rear Spectral CF EX click here for our first look) 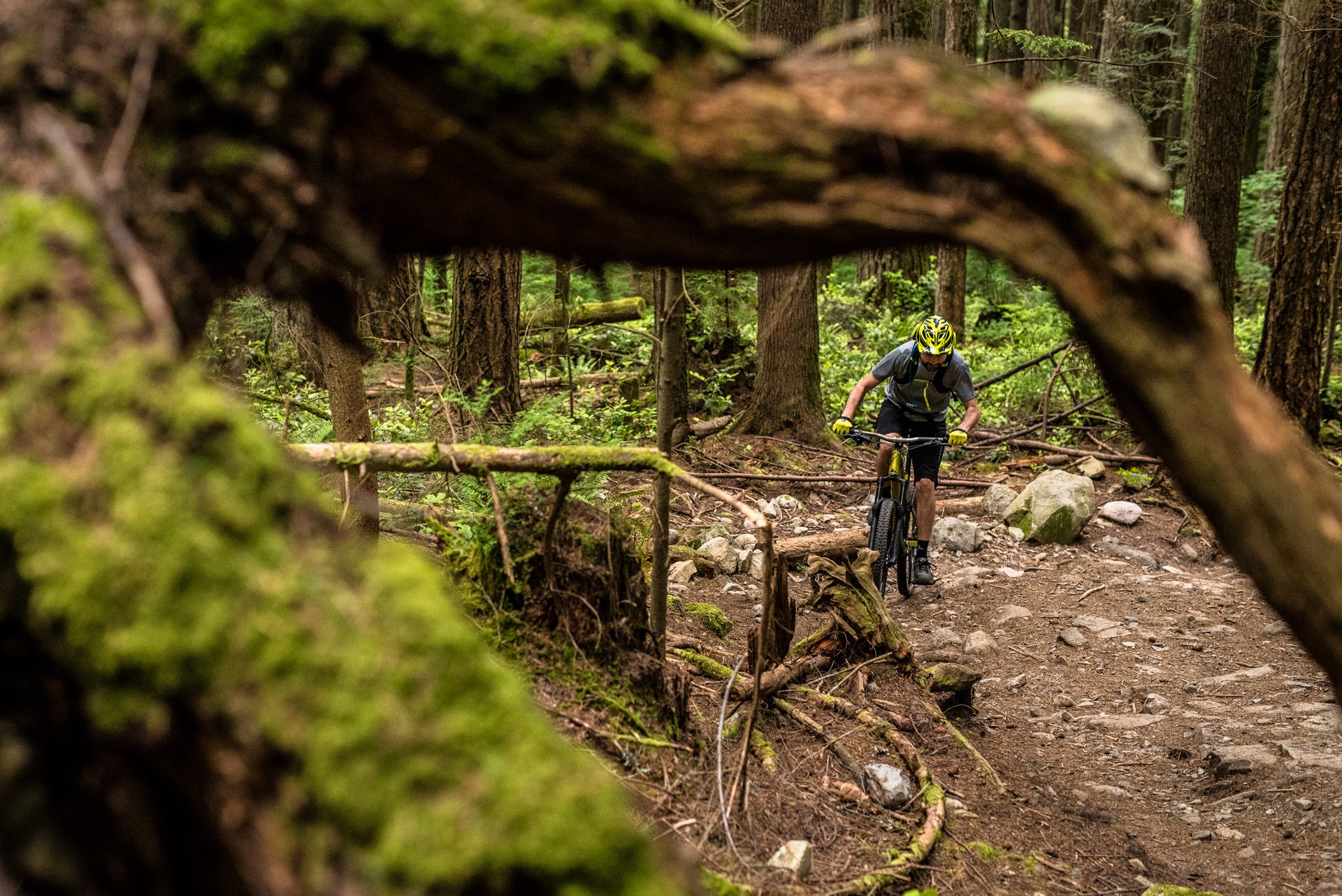 A lady on a new Rocky blew by me on this climb, but that was not the fault of the bike.

And at some point we need to speak about the price. Canyon has finally gone live in the USA, and the price of this bike is listed at $4300 US. This seems pretty fantastic. There are lots and lots of similarly travelled bikes in this price range. There just aren’t very many that come close to this much bang for the buck, either in frame design or parts. 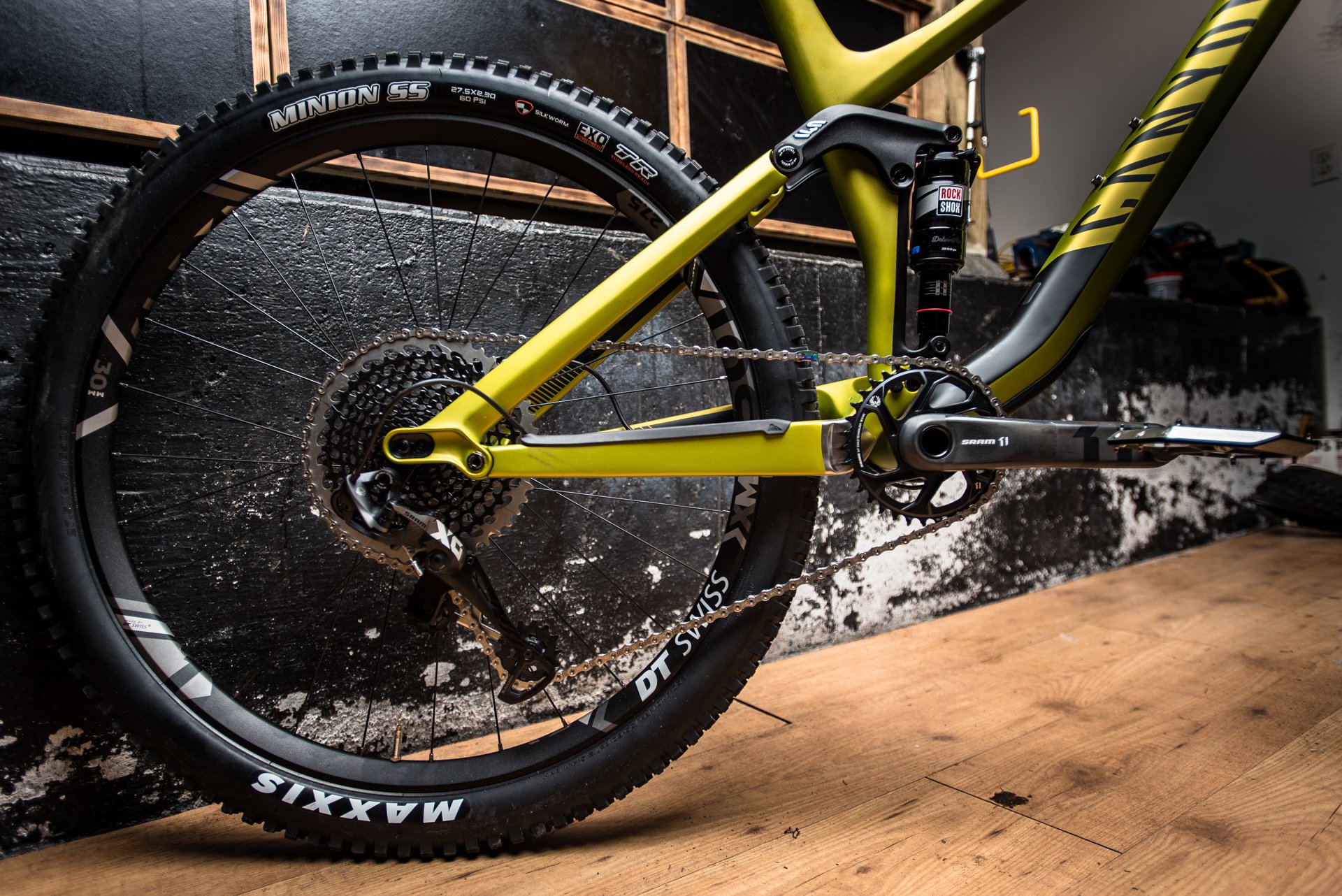 A nice little chainstay guard and an awkward rocker link that just loves to tell you how much travel you have.

The suspension has a pretty straight rising rate. The leverage ratio goes from about 3.15 down to 2.55. Couple that with a pretty short stroke air shock (2” stroke), and you have a fairly progressive rear end. This proved to be both good and bad.

Bad because this much pressure in a rear shock always feels difficult to manage. By the time I got things sorted, 250 psi leaves me and my shock pump feeling uncomfortable, and still has me in the 35% sag range. As you play around with air pressure, it always feels like it wants 5 psi more, and it leaves me wishing for a drop in leverage ratio, or at least a shock that requires a bit less air pressure.

But the good thing is that with all that progression, set-up is fairly forgiving. In my perfect world I would probably want to run a set-up that is firmer off the bottom, with a bit less sag. But even though this "feels" a bit soft, in practice it works really well. Pedalling isn't compromised, small hits are handled easily, and there is enough ramp up to eliminate any fears of bottoming out. 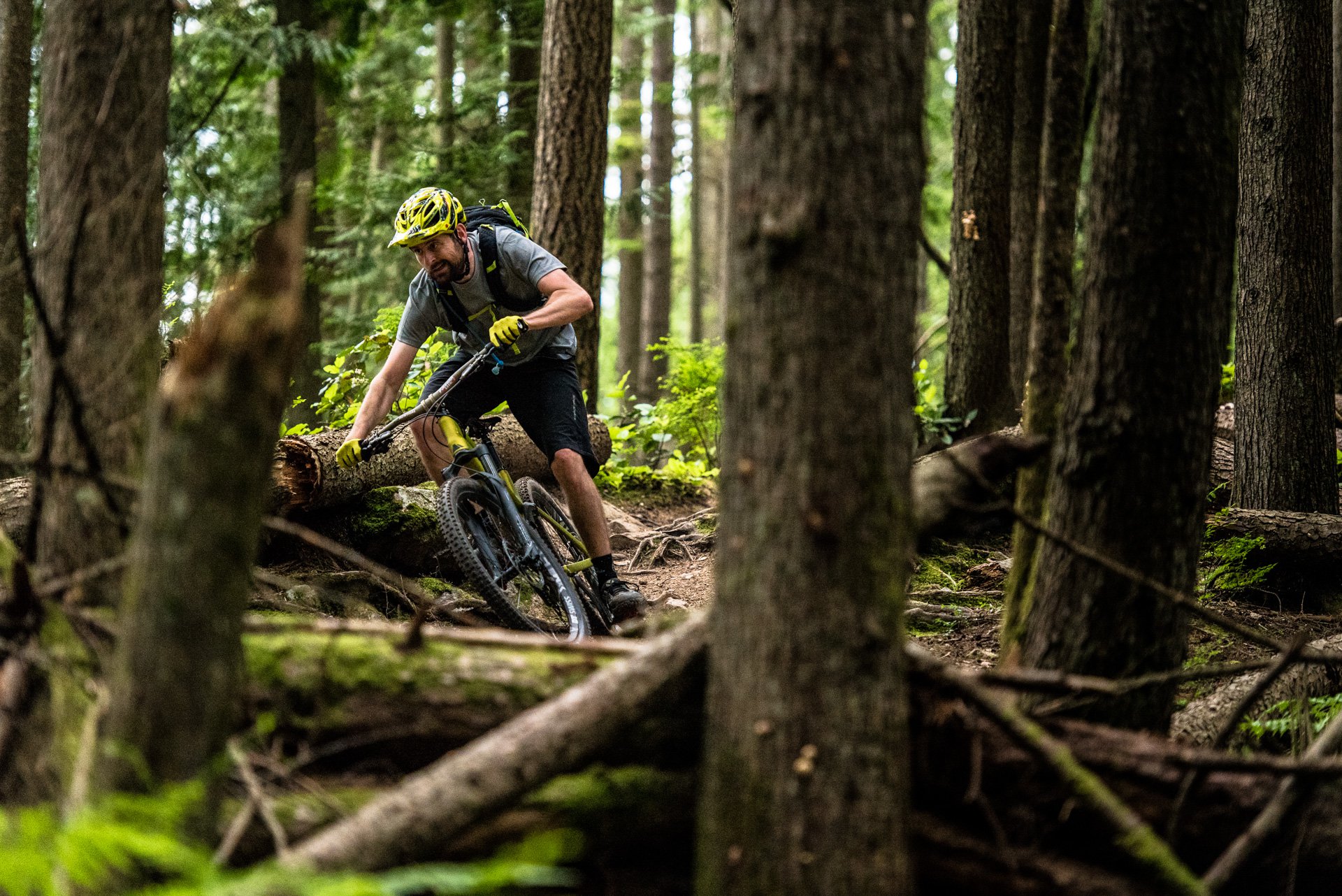 This is prime Spectral territory...a flatish trail with lots of turns. Get your turn face going.

Riding up on this bike is a pleasure. The light weight, good seating position, mini-nobbed rear tire and relatively bob-free suspension make climbing easy. Indeed, on my first ride my planned “couple of laps on the bottom of Fromme to sort out suspension settings" turned into a climb to the top. And more than a few rides resulted in me spinning an extra lap, or pushing up another switchback or two. This is high praise from a non-climber like myself.

Once the climbing turns technical, things remain well composed. The front end doesn’t wander and traction is plentiful. It is easy to scoot through tricky bits and remain on your bike where you might otherwise be hike-a-biking. For a 140mm travel, 650b bike, climbing is as good as I could hope for. 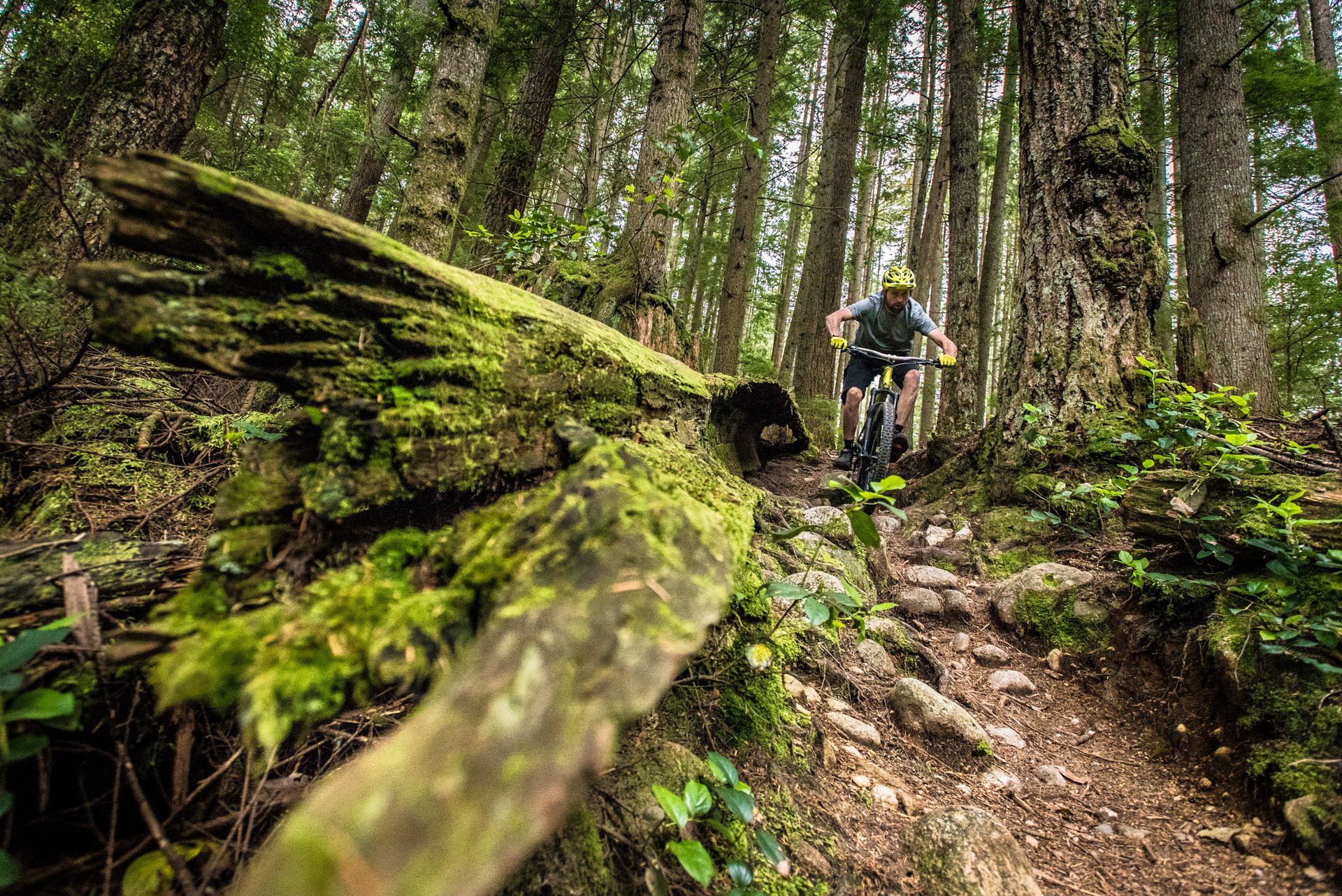 Happy in the green room.

I’ve been spoiled lately with some bikes tailor-made for descending. I’ve largely been riding longer travel 650b bikes, with a mid-travel 29er or two thrown in, without a lot of time spent on this category of bike. Indeed, on my first few rides, I wrote it off as a good climber, nothing more.

But once I dialled in the fork with a bottomless token, and sorted out the pressure in the rear, I realized that this bike was handily taking on all of the things I could throw at it over the course of a regular ride. It's not as slack or as long as some of the latest bikes, and it may lag a bit on outright pace, but the counter to that is that it is also a lot easier to ride, and you're quickly deceived into thinking you have more bike under you than you do. The end result was me beating the crap out of this bike more than I have any recent test bike. I started to get cocky, taking it places I shouldn't, crashing it more than I would hope as I found its limitations. Indeed, a wet day on the far side of Cypress showed me that there probably isn't such a thing as a quiver killer. 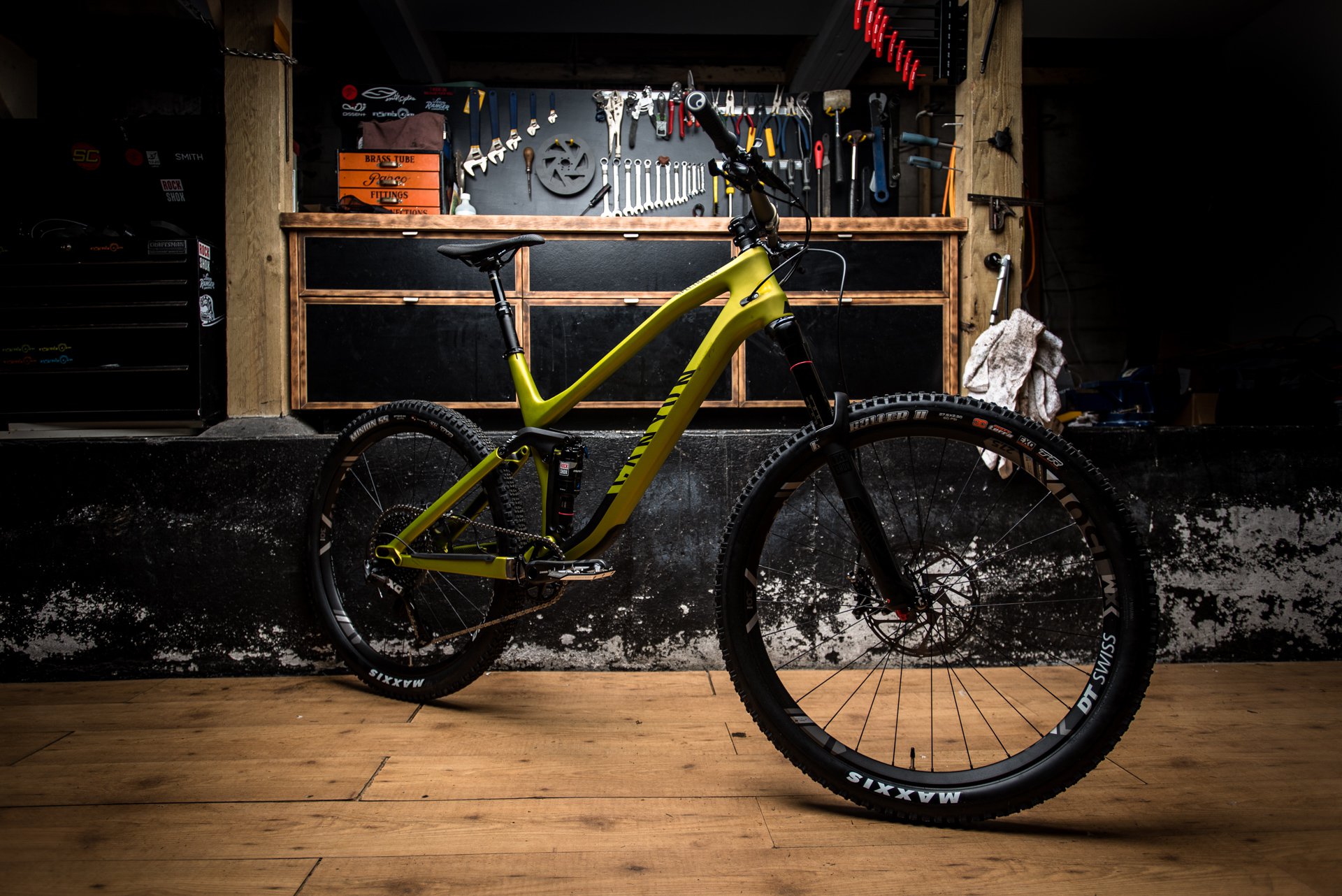 The Spectral is one of the few remaining carbon fibre mountain bikes you can buy without boost hubs. Good news and bad news? Replacement wheels/fork will be cheap, if you can find them.

But the more time I spent on this bike, the more I appreciated it, and the less I missed having more travel. I was always a bad racer because I was too focussed on being smooth and precise, and this bike plays right into that. It's easy to find your line, and the progressive rear end and the extra 10mm of fork travel (The EX part of the title... many of you won't bother with the 140mm forked versions) do a remarkable job of ensuring that you find your way through it. 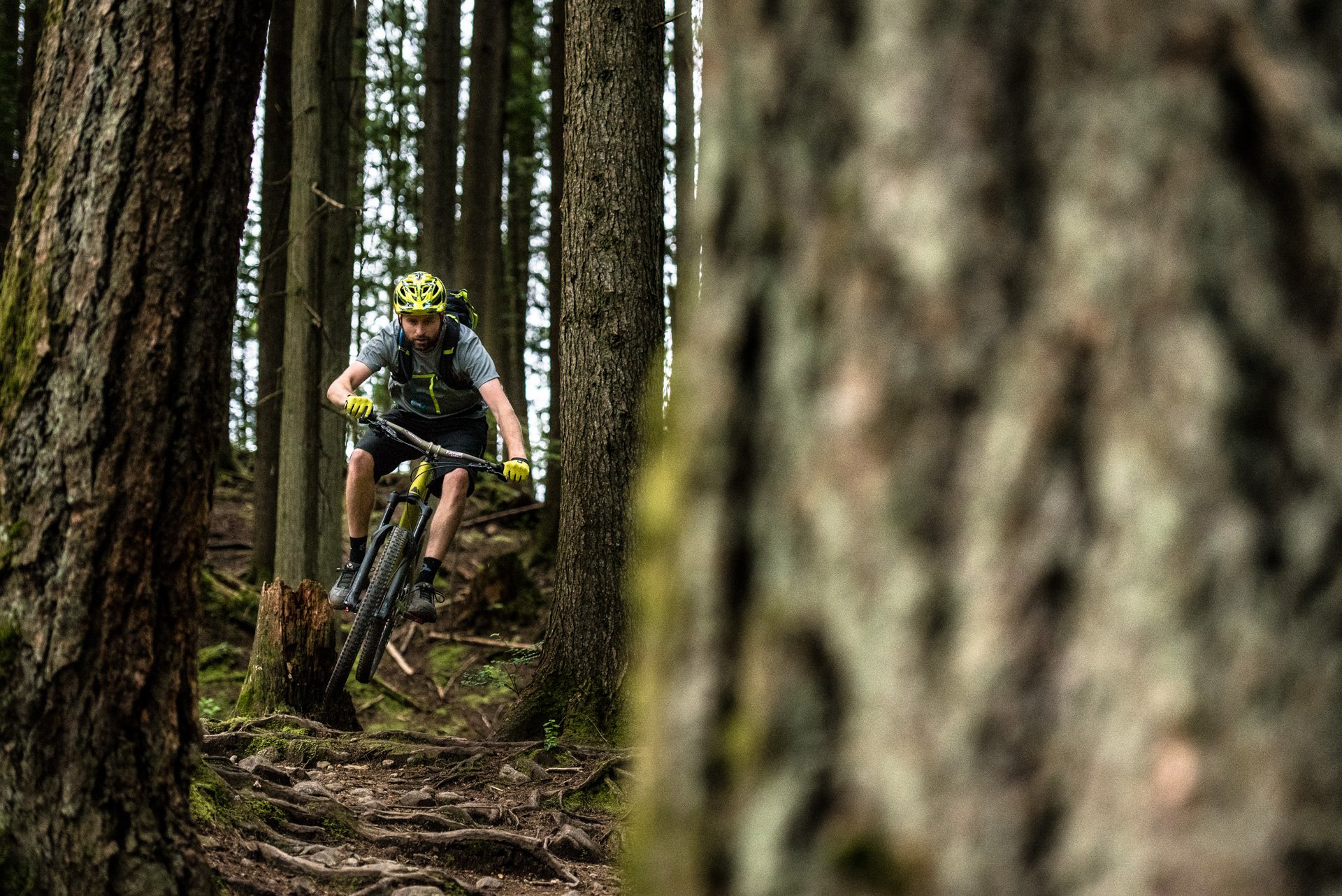 It will even let a now air-challenged rider like myself put a bit of space under the tires.

If I have to nitpick, there are a few things I would change on this bike. Or think about changing, at least.

The saddle (an SDG Circuit MTN) perched on top of that post could use some work as well. It's hard and unforgiving.

Part of me thinks I'd build up my personal version with a bit more meat in the tires. They're certainly starting to show their limitations as moisture creeps in to my rides, but in dry weather I had absolutely no complaints, and maybe changing them would detract from the enjoyment I experienced on the climb up?

Will this Maxxis Minion Semi Slick hold up as a North Shore winter tire? 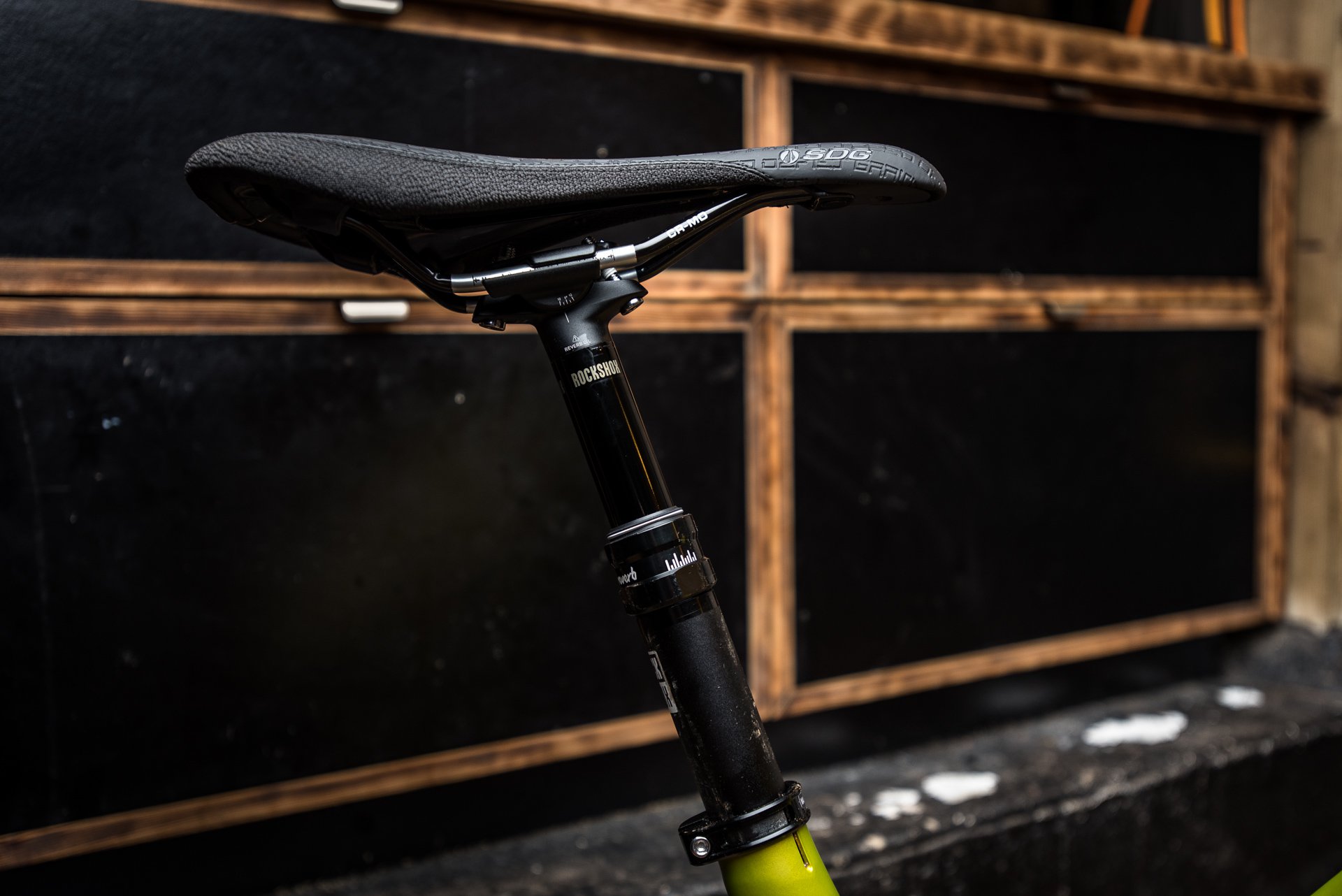 125mm drop isn't enough for a size large aimed at aggressive riding. The firm SDG saddle may suit some posteriors but not Dave's.

What is this bike best for? This bike is best for people that want to climb to the top and have a bunch of fun on the way down. It's best on those trails that fall somewhere in that middle ground of difficulty, and it lets you pump and pop your way down those trails with grace and aplomb. It's not quite one-bike-to-rule-them-all, more like one-bike-to-rule-95%-of-the-stuff-you-ride-on-a-regular-basis. It's a capable, fun, well-priced bicycle that won't need much (if any) work before it starts eating away at your local trails. This bike has been around for a few years now and is probably due for a re-design soon. Hopefully Canyon doesn't screw with the formula too much on the next iteration.

The Spectral isn't yet available in North America according to Canyon's web site but the US price of $4299 has been announced.

> "250 psi leaves me and my shock pump feeling uncomfortable"

Should not be an issue (as in: it won't explode), the Monarch is designed for high pressures, up to 350 psi. My friend who is a big tall guy has an XL Spectral with a Monarch and he has to run over 300 psi.

I have an alloy Spectral with a Fox DPS and it requires much less pressure to get 30% sag.

It's a very nice bike, it seems kind of unassuming at first but once you ride it it's super fun and capable.

I know the shocks can take it, but I would not want to mess around with a shock that had 300 psi in it every ride.

Interesting that your Fox requires less pressure.  I'm sure each and every shock is a bit different.  I did mention that a different shock could be enough to solve the problem.

Must try a coil on it. I rode my Spectral with CC Inline Coil and its awesome. Worth every penny.

It probably does have the right kinematics where a coil would work pretty well.

It probably does have the right kinematics where a coil would work pretty well.

Those are some high leverage ratios for a shock. I'm of the mindset that bikes work better at lower leverages so the dampers don't have to be as restricted to do their jobs, helping negate cavitation and heat cycling. It might be a bit of a falling rate, but even then it's a bit higher than I'd care to run. To each their own.