I’m not going to lie to you. I like Brooks saddles. Quite a bit actually. I have been accused of being a (hold on a second…let me check my notes) technophobe/industry grouch. But I happily embrace that label when it comes to shilling for an old school company like Brooks. A Brooks just adds a touch of class to any bicycle. See what I mean? 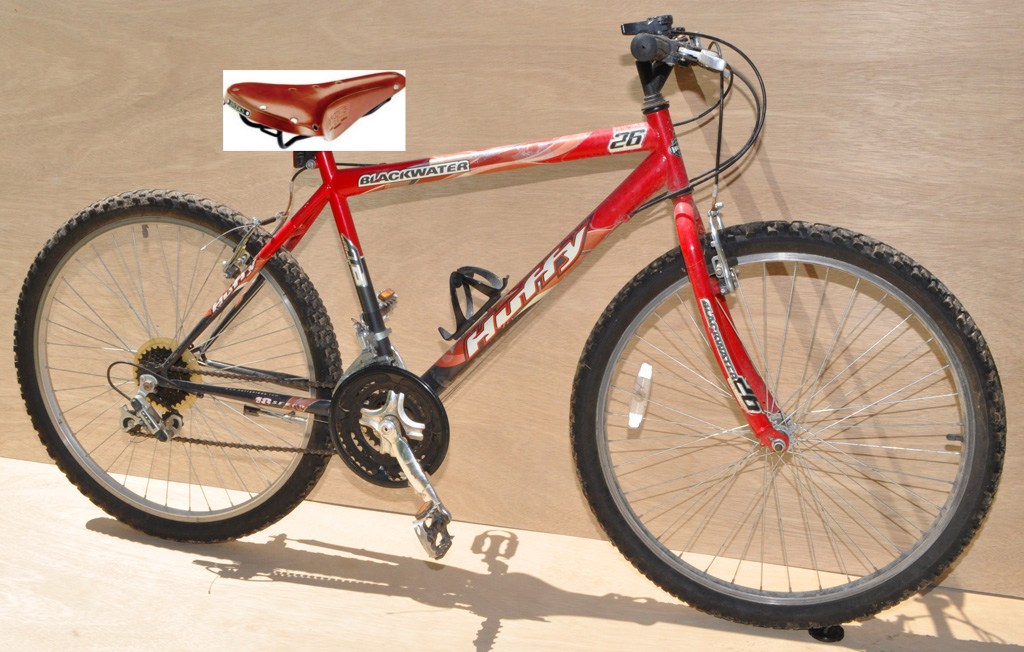 #26inchforlife (Please note that I was going to go to the effort of bolting a Brooks to a derelict bicycle downtown someplace, and then I was going to take a photo of it…but who has the time? Stealing photos off the Internet is much easier. And I really needed an excuse to polish up my Photoshop skills. That’s going on the resumé!)

How is this one different than a classic leather Brooks?

Like I said before (a paragraph ago, actually), I like Brooks saddles. Which is why I’m a bit saddened to reluctantly admit that they aren’t perfect for mountain biking. After all, hand-crafted leather isn’t the best choice of material for stomping around in the woods on a muddy day. Then you have to consider that you can feel that solid steel frame through the leather if your ass gets a bit out of position. And, lastly, you have to worry about your saddle attempting to rip your lower body open like some kind of rabid weasel if you ride off the back of your bike. I can cope with all of these things, but I would be intellectually dishonest with myself if I didn’t admit that I had been rethinking my position somewhat over the last few months.

So it seems pretty interesting to me that Brooks has created a new saddle that seems to totally fix all of these things. Enter the Brooks Cambium. Will I once again be able to shill for Brooks with little-to-no shame? 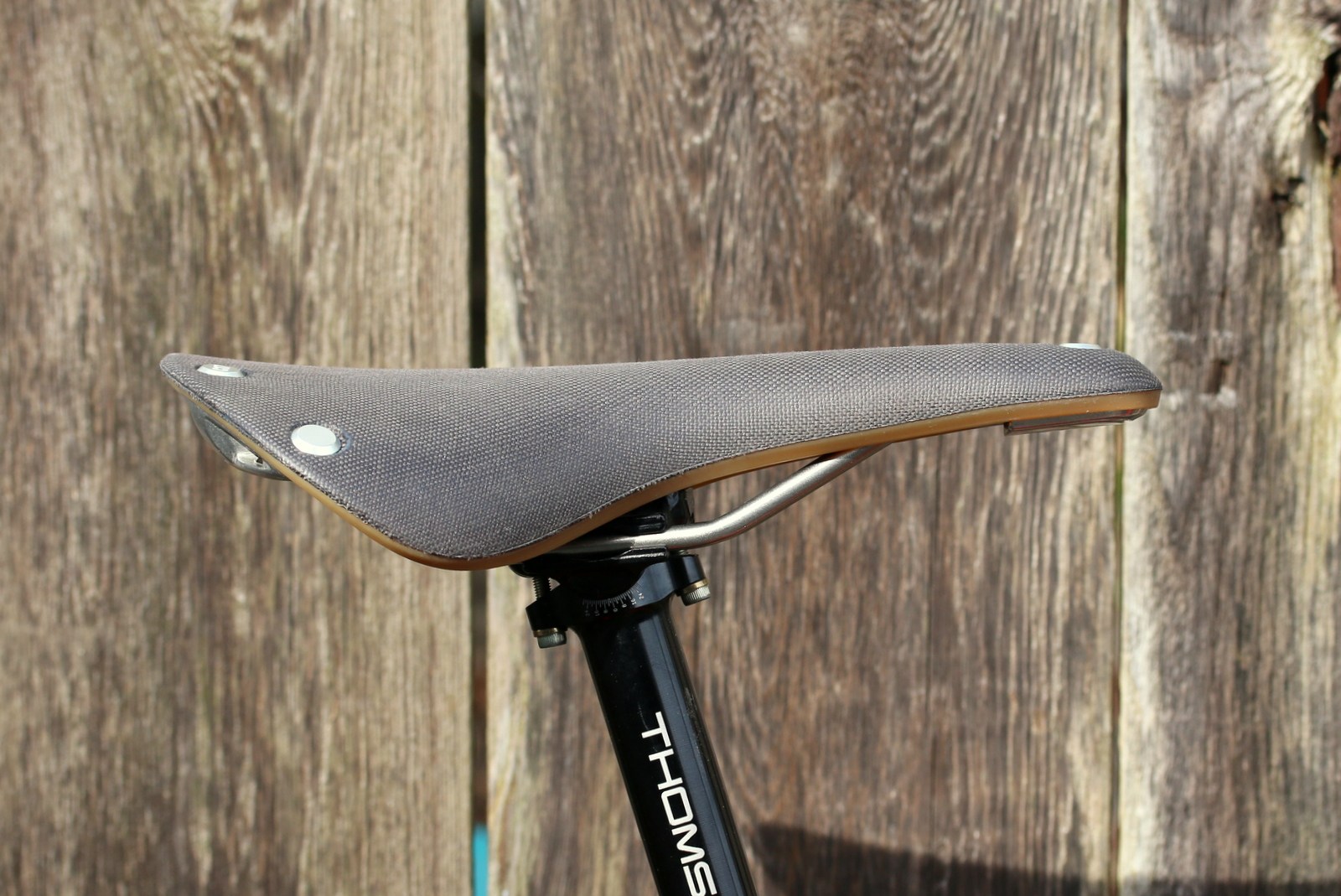 Hey Ed, you think this needs a caption?

So, you’ll notice that this saddle is not made out of leather, rather, Brooks has gone with a “vulcanized natural rubber” base layer, covered in “organic cotton”, designed to mimic the feel of a traditional leather Brooks. This is a bonus if you love animals or if you plan on riding your bicycle in inclement weather (see: Vancouver). Dirt washes off easy and it’s something you no longer need to worry about. And cows and shit. Good stuff. 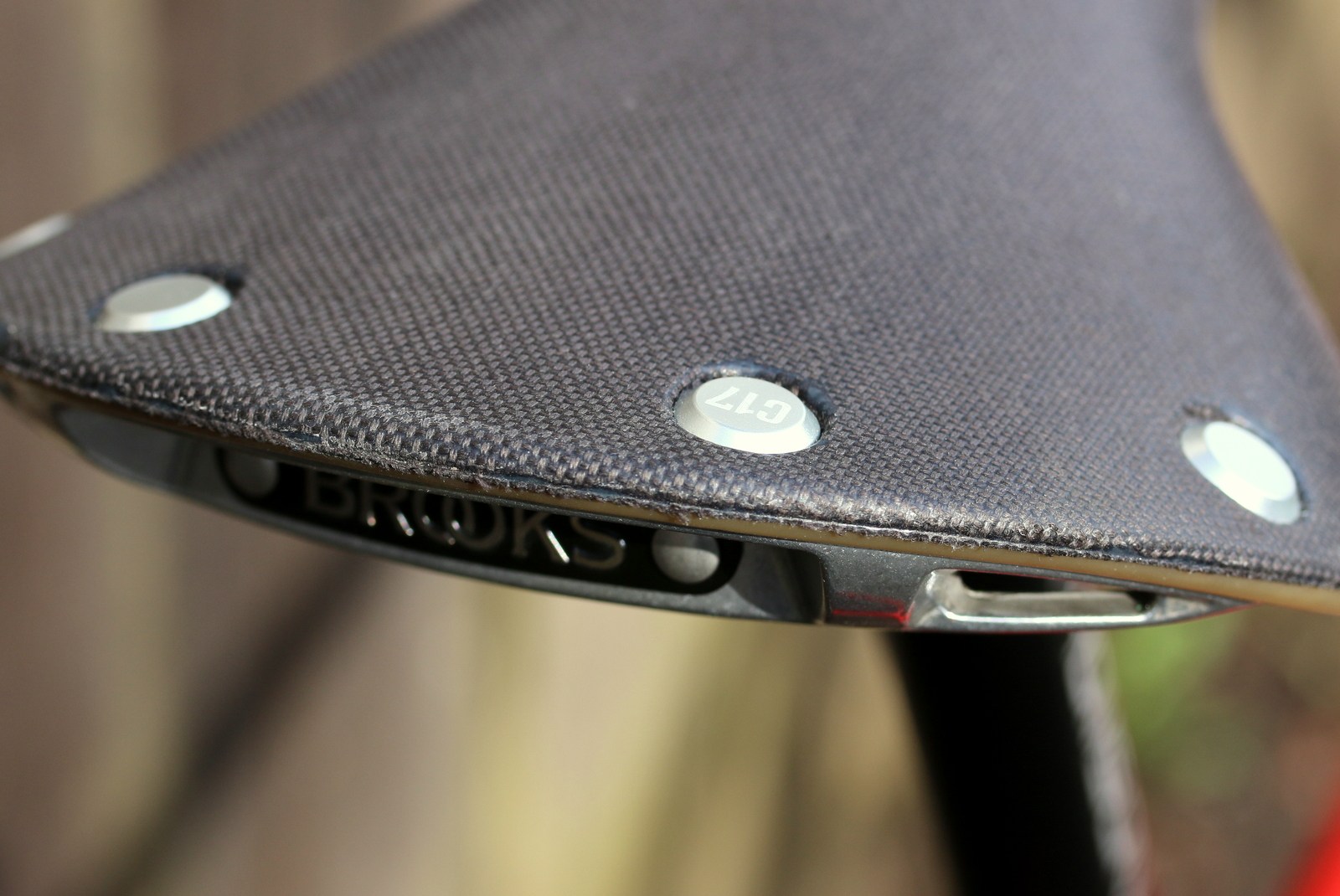 There’re a couple of great ass-related things about the Cambium. First off, no more break-in period, which is a pretty great thing. Except it means that this sucker isn’t going to get any more comfortable than it already is. With a standard Brooks it can be pretty exciting to think about how great things are going to be in a few weeks time. A saddle for the optimist, really. With the Cambium, what you see is what you get – just like every other saddle out there.

Next, the saddle as a whole is a lot more forgiving. My broken-in leather Brooks is very comfortable, unless I move out of the sweet spot (we talked about this a bit already). This isn’t a big problem on the road, but takes a bit of getting used to when you’re moving around on your saddle a lot. i.e. Mountain Biking. Anyhow, the Cambium feels pretty much the same, front-to-back, so is much more acceptable of body English and haphazard movements.

My last Brooks took a bit of work to become mountain bike friendly. This saddle is much better suited right out of the box. The lack of sharp metal along the back edge means that you’re no longer risking unelected surgery on each steep section of trail. However, the solid construction does still work against you. Even though this has a friendlier backside, it is still a very solid piece of meat that you’re forcing back and forth between your legs. Your thighs will still be unhappy if your riding requires lots of seat lowering and off-the-back riding. 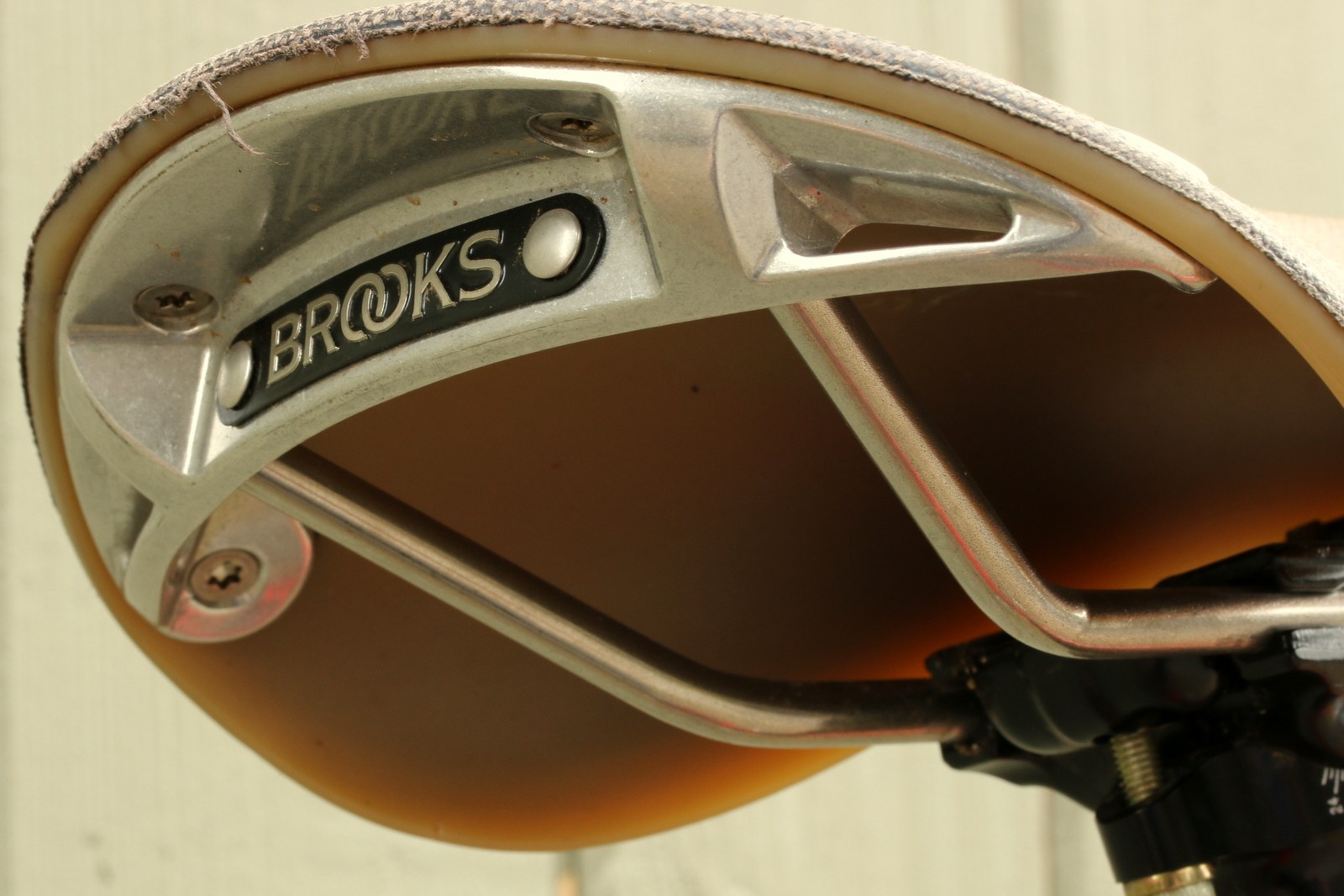 A lot friendlier than your average Brooks.

In addition to all that, there were a couple of things that I didn’t really expect out of this sucker. I tend not to be concerned about how much things weigh. At all. I do complain relentlessly about heavy bikes in the middle of a ride, but when it comes to putting my bike together I put almost zero consideration into how much a part weighs. Keep that in mind when I tell you that the weight of a standard steel and leather Brooks saddle gives me pause. So it’s pretty nice that the Cambium has carved out a chunk of that weight. Aluminum and rubber (and tubular steel rails) are lighter than steel and leather, I guess. Brooks suggests it’s 415g, vs. the 520g of a standard B17. Honestly, I thought it would be more of a difference… Oh well. It feels a lot lighter. 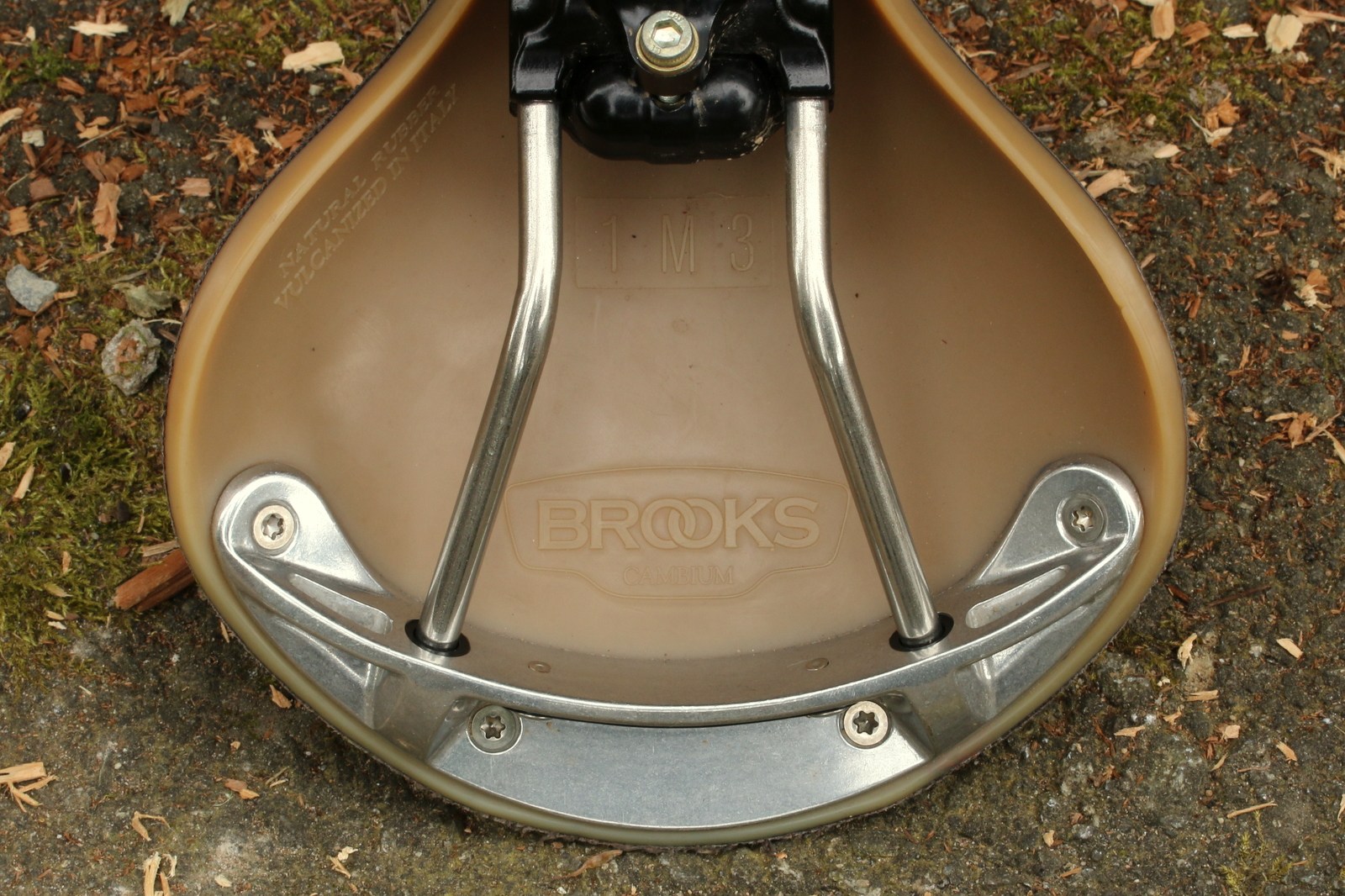 Next, check out how this thing is held together. There’s torx bolts that mate up with the “rivet” heads on the business side of the saddle. I would imagine that if you were to break something on this guy, you could find it on the trusty Brooks parts list, order it up, and be rolling in no time. I really like that. But this is total speculation, as there don’t seem to be any Cambium parts listed. Yet.

Okay. There are some negatives.

Ya. It’s still not perfect for your “enduro”-type mountain bike. We talked a bit about that above. As well… we are talking about a Brooks product here after all, so you most likely won’t like the price. It’s kind of one of those if-you-have-to-ask type scenarios.

Next, I’ve put a couple hundred kilometers on this guy, probably 50-50 asphalt and dirt. And the top is starting to show some wear in some areas. Around the “rivets”. Along the back. Looking at the photos of when it was fresh out of the box, it looks like some of this was already present, just as a function of how it is constructed, but it has definitely gotten worse. It’s no biggie, but I wonder what it will look like in 10 years time? 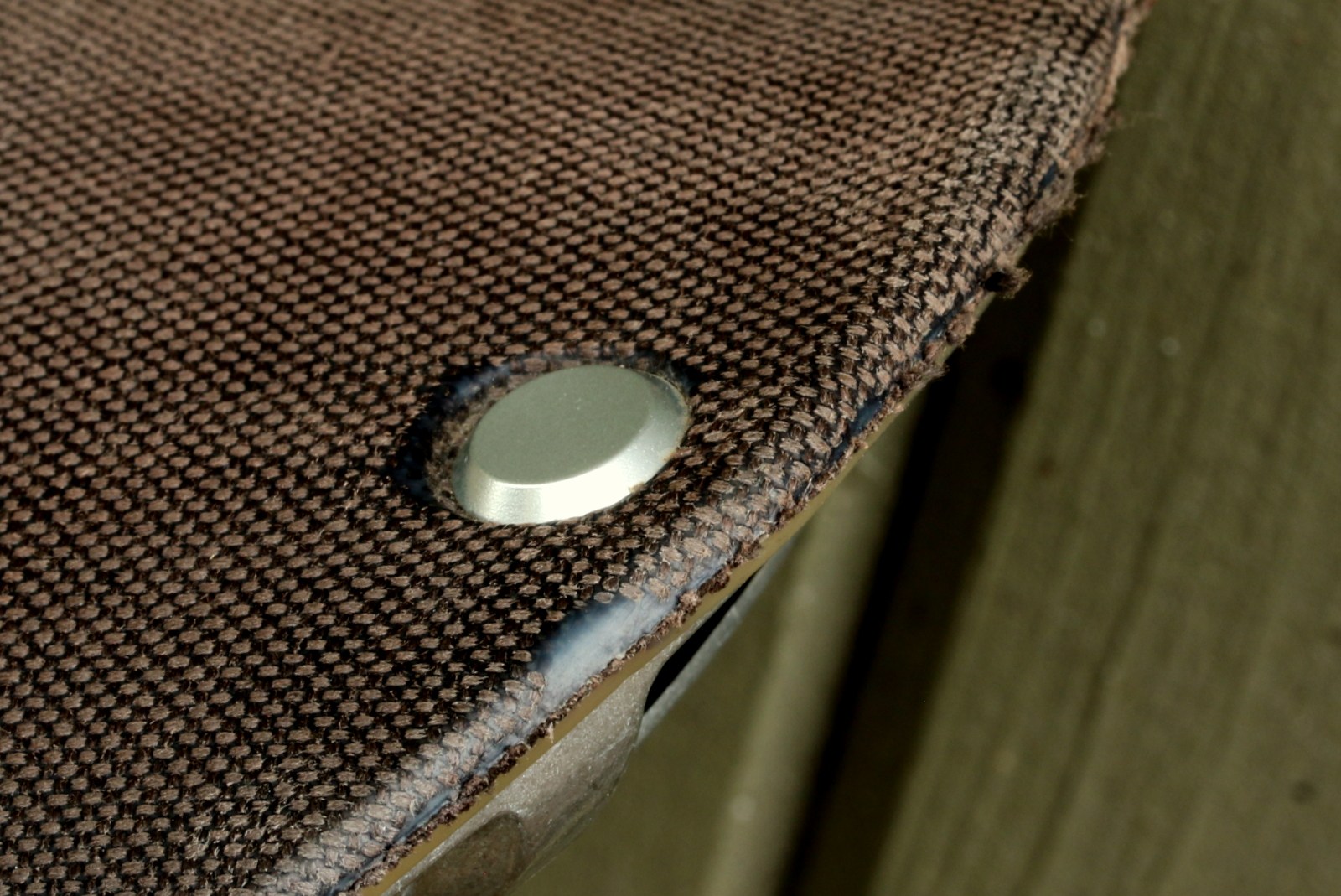 See. No biggie. But not fantastic to see, either.

As this test progressed, I found myself thinking things like should Porsche be making SUV’s? Should McDonald’s sell salads? Or should these companies just have stuck with their bread and butter (or greasy stomach bombs, as it were)? And as I’ve ridden this thing my thoughts on this question have evolved. I really want to be excited about this saddle. It seemed like it was going to be the answer to all of my Brooks questions.

But, honestly: if I’m building a road or a city bike, I’m sticking with a standard leather Brooks. And if I’m building a mountain bike… while a lot of the Brooks bite is missing from this saddle, it will still nip you occasionally when you’re riding aggressively. If it’s not uncommon for you to buzz your rear tire with your ass or jam your seat into your thigh/groin/abdomen or what have you (and I sincerely hope this is the case, dear reader), this Brooks might still not be for you. But if your rides are mellower than that… well then, this might be a nice cherry on the top of your high dollar XC/Trail/enduro-minus bike or whatever we’re calling it these days.

Dave’s love for hide and steel continues, but he’s yet to find the perfect match for the trails. Do you have any traditionalist tendencies?

"I never write reviews because I am not sure if i can believe them. I promise this to be true about this saddle. I had the B-17 but i wanted something with little or no maintenance and that promised to be just as comfortable…. I ordered it and installed it, i adjusted it pretty close to what my leather B-17 was. I rode it for 60 miles, adjusted it millimeters here and there, fore and aft, height and angle, I was amazed… No break-in period… my other saddle took a while to break in This one was just as comfortable as the original the very first time i rode with it. I have ridden consecutive days between 60 and 80 miles and find myself not thinking about shifting my rear… This is by far the most comfortable seat (saddle) i have ever had. It cost a bit… but i ride all the time everyday for hours as i am semi retired and i love riding so it was worth it… the best thing is i ride in the rain and don't need to worry about the seat being covered i don't have to put leather softener on it etc… etc… it never leaves me with a sore rear. I can hop right back on and ride another 60 miles as long as my legs hold out. You can't beat this saddle. I would recommend this to anyone that considers themselves to be a long distance person or a short distance person. I will probably become a brooks C-17 salesman for free i like it so much… Nice job brooks your engineering and time was well invested."
Pros: Durable, Attractive, High Quality, Rugged, Adjustable

I like unusual saddles also, and so am pre-disposed to agree that the standard Brooks fare is for the 'optimistic' mountain biker. That said, this is a great bit of writing, thanks for an engaging and entertaining piece.

Love it, Dave. Had just been contemplating saddles myself the last few weeks (due to more time on the commuter, but also on the MTBs) and was wondering about how I might fit a Brooks saddle onto one of my steeds. The Cambium looks like it might be a hardtail friendly choice…once I decide on a hardtail to build.