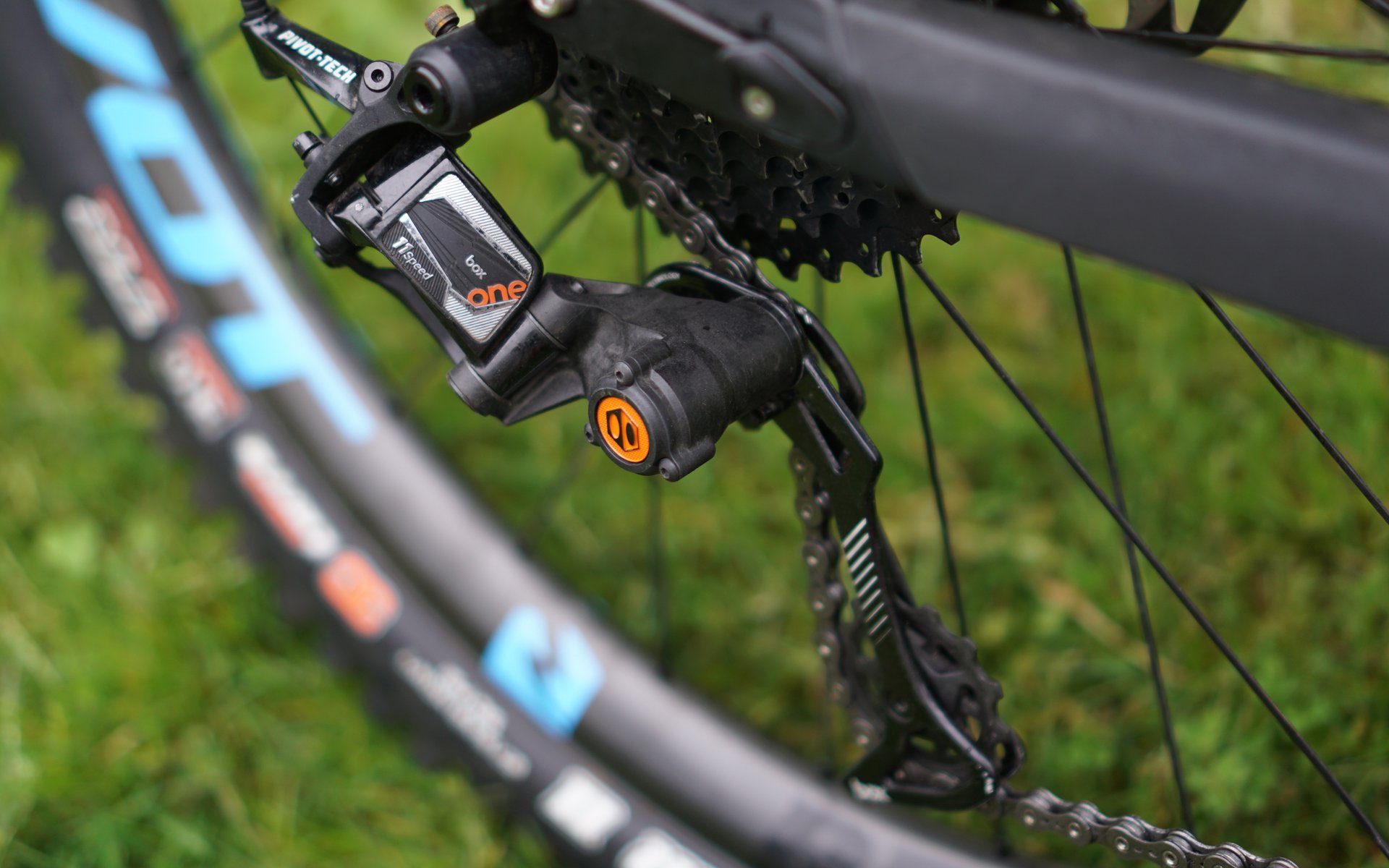 Box Components is a company based out of California that surprised everyone with a new drivetrain option late last year. Andrew Major did a great first look and introduction article already that you can find here. I hadn’t heard of Box Components before, but it seems they’ve been manufacturing BMX components for some time. More recently Box has made an entrance to the MTB market with the launch of the One Drivetrain. I think competition makes the breed stronger, so I was immediately interested to try out a legitimate third option for MTB drivetrains. As mentioned in Andrew's article the new Box drivetrain is called One and it centers around an 11 speed drivetrain with a single front chain ring. 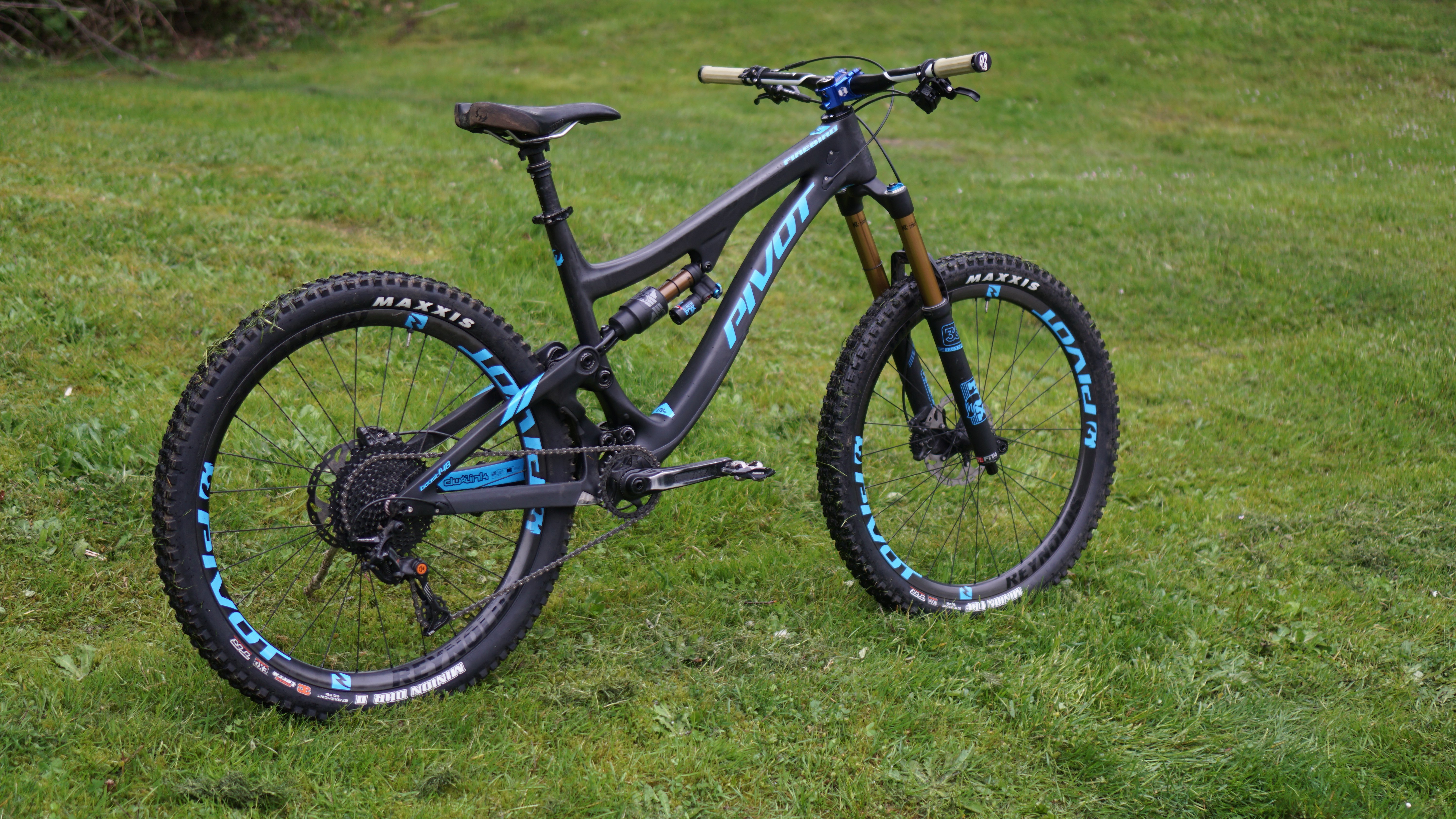 The One drivetrain is essentially made up of four components; the One Push Push shifter, the One rear derailleur and the Two cassette (Ed note: the cassette is part of the Two tier - a tier below the rest of the One stuff. Box sent us the Two cassette but was careful to point out that it is not considered to be on the same level as One. The One cassette is not yet available). Pricing is reasonable, with a derailleur priced at $175 USD, the shifter at $75 USD and the cassette at just $99 USD. The prices are somewhere between the SRAM X01 and GX components for comparison's sake. Weight wise the shifter and derailleur are similar to GX, with the Two cassette being a bit heavier at 480 grams. 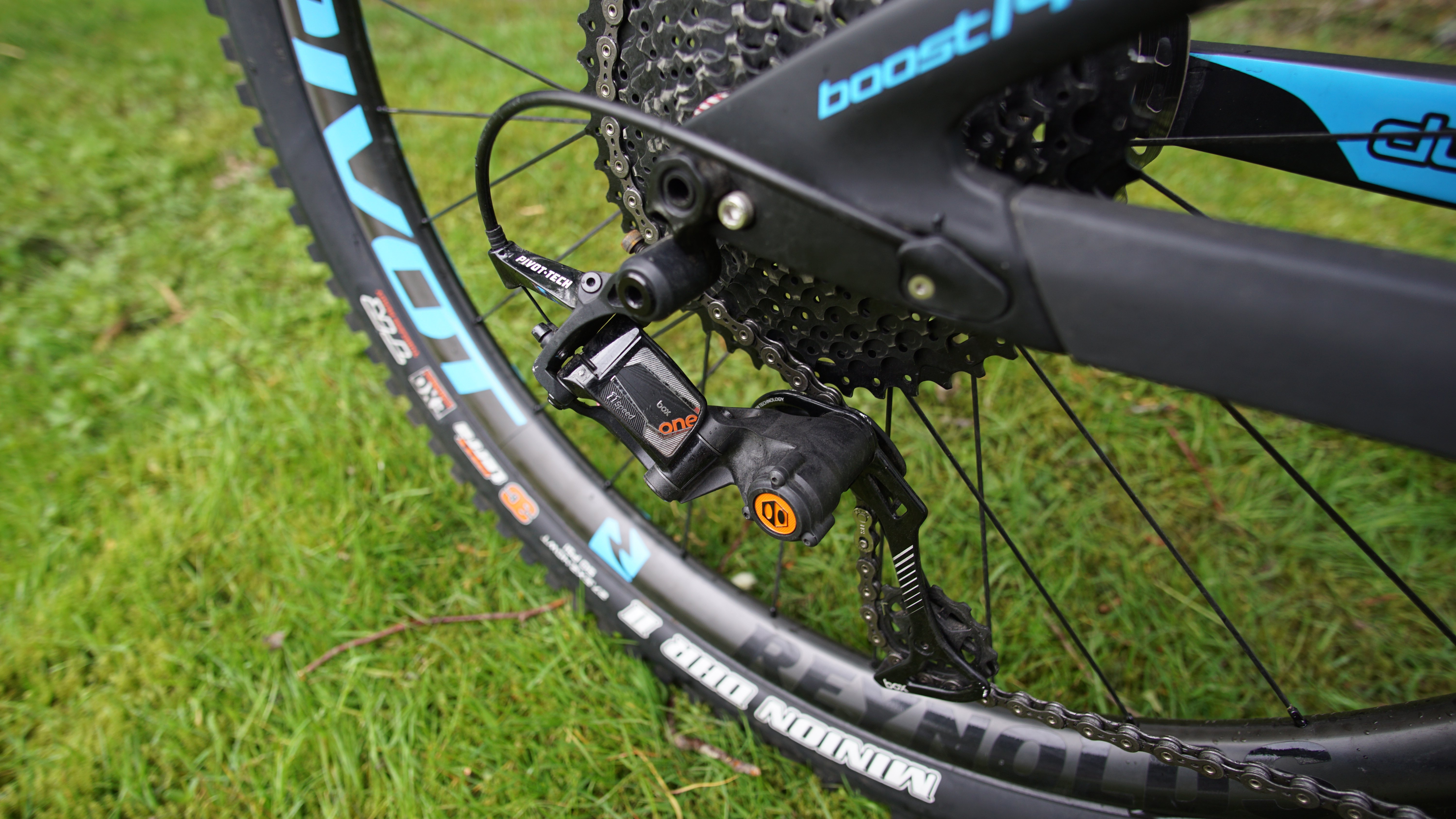 The Box derailleur and cassette. I quite like the industrial design and styling of the Box components

Functionwise the most notable feature of the Box drivetrain is the Push Push shifter. There is a single lever on the shifter that is actuated with your thumb. Push forward as you normally would for easier gears. Push the same lever inwards, towards the stem and you get harder gears. The shifter took a couple minutes to get used to, but the learning curve was quick. Downshifts to easier gears were never a problem, and I liked being able to get many shifts with a single sweep of the lever, but that isn't anything particularly innovative. The push actuation in towards the stem was a bit more finicky. I found the easiest method was to find the crack in the lever and push there. This motion was intuitive when descending, but I'd always miss a couple shifts when seated and pedaling for some reason. 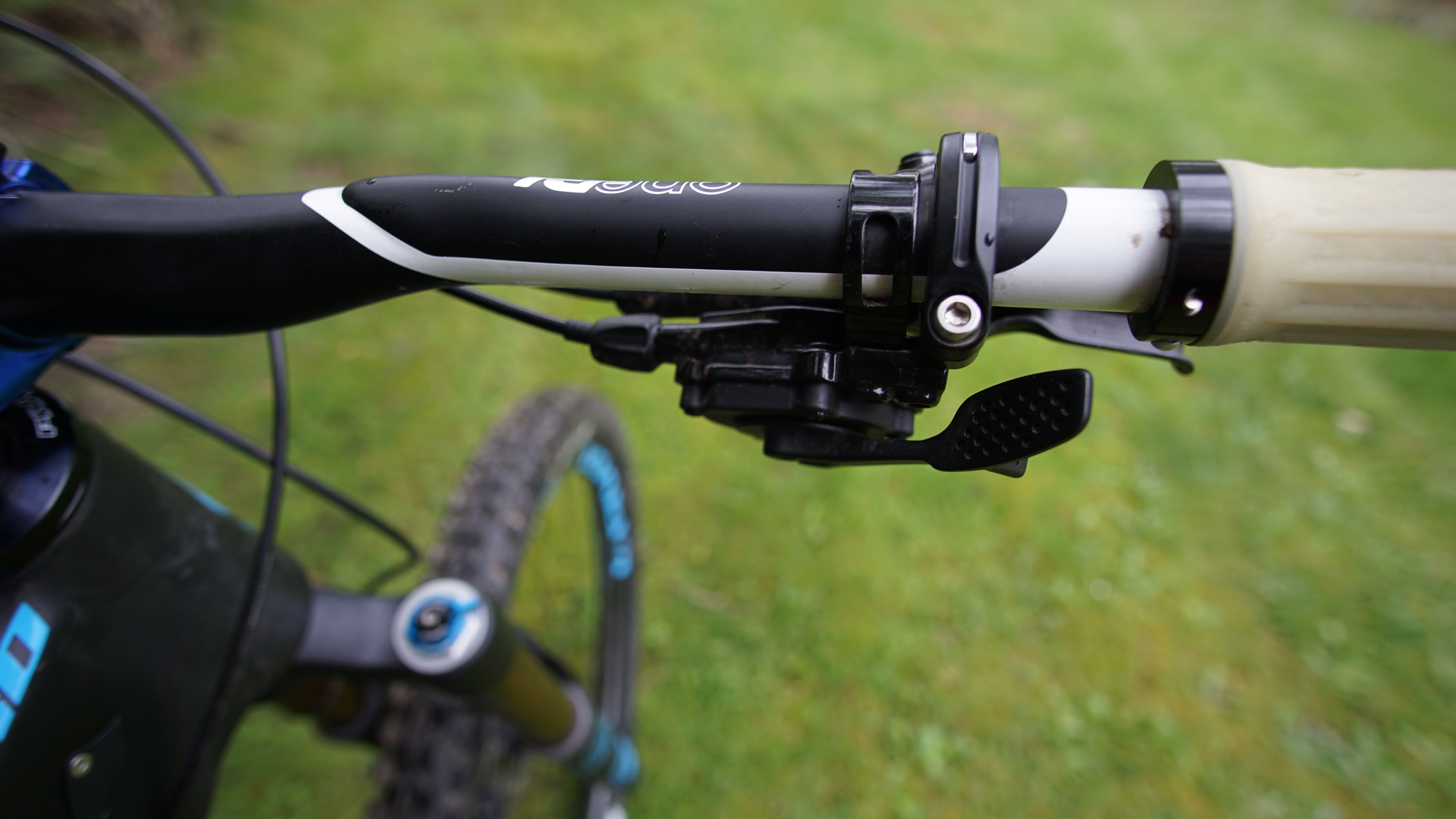 Pushing the lever into the screen gives up to four downshifts 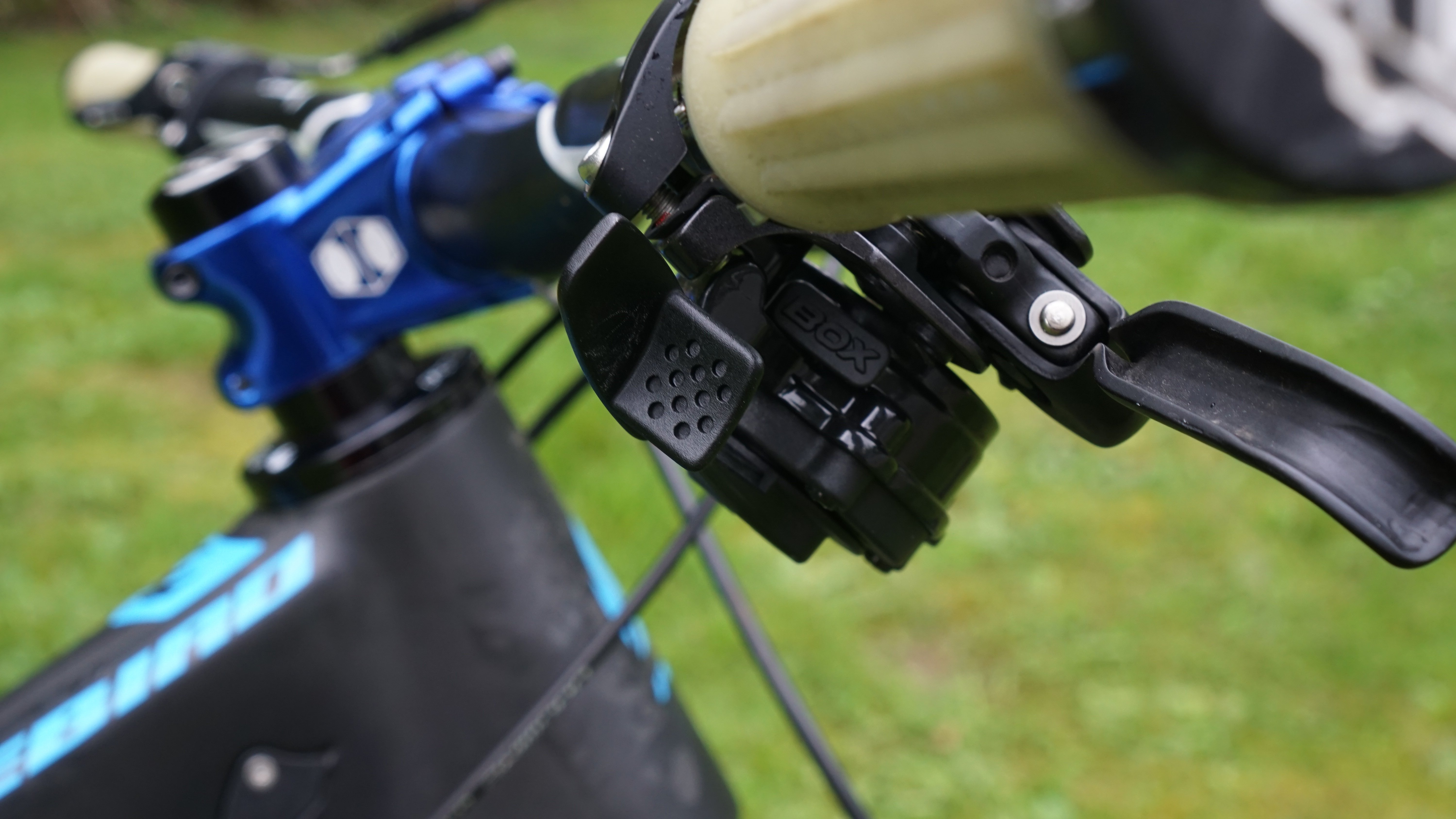 Pushing the lever into the screen gives a single upshift.

The cassette seems to be standard fare with nothing overly complex. The construction is from high tensile steel and aluminum and appears to be a good durable assembly. The cassette bolts to a standard freehub, no XD options available that I’m aware of. 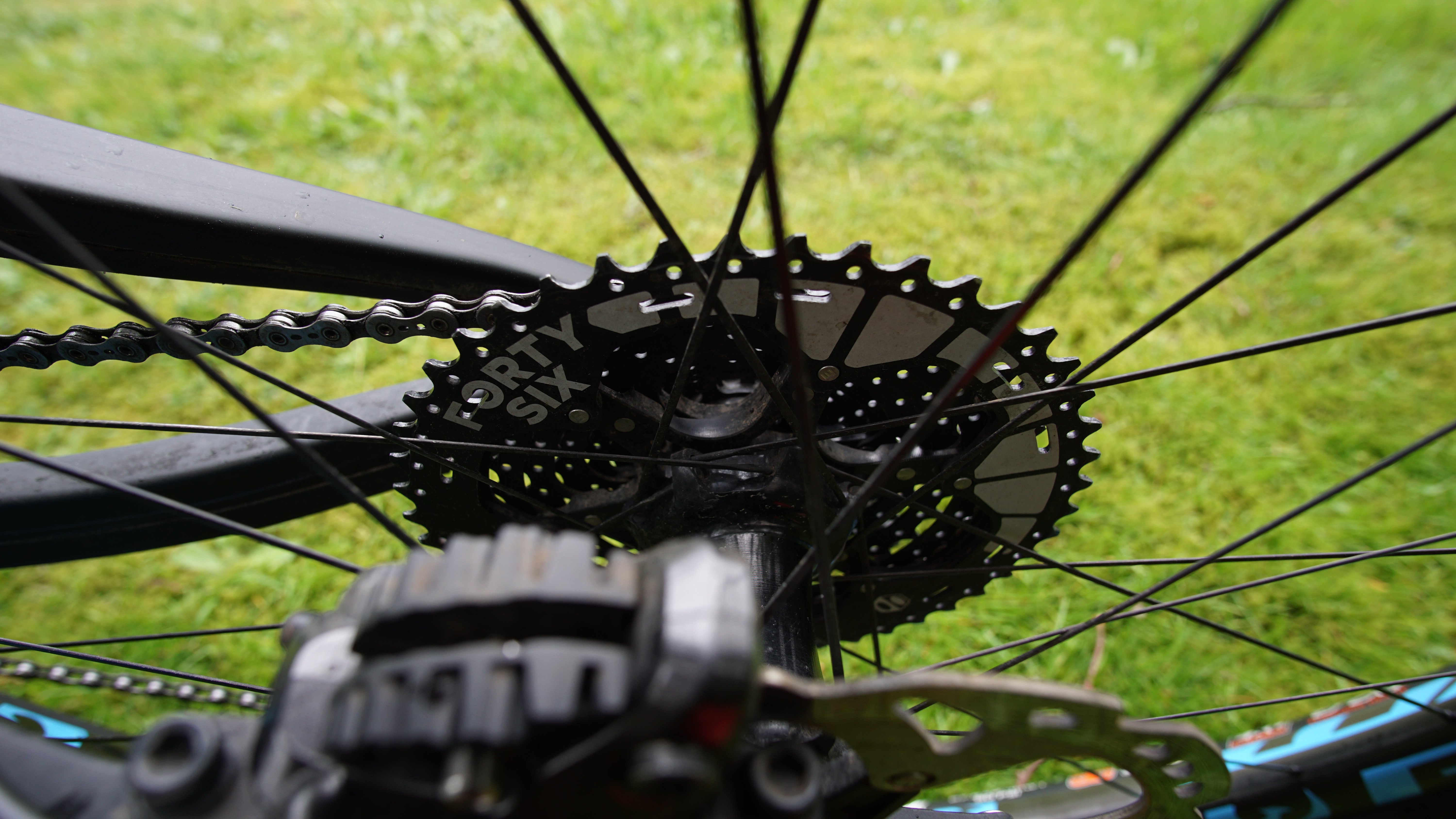 A decent size 46 tooth ring on the back will help with steep climbs. Otherwise the cassette is standard fare with a partially pinned construction

The derailleur has a couple interesting features. First off the CamClutch™ is said to control chain movement, but feels very light by my calibrated hand force-o-meter. The Box One derailleur is also said to use Pivot Tech™, which is intended to prevent derailleur damage in the event of an impact. 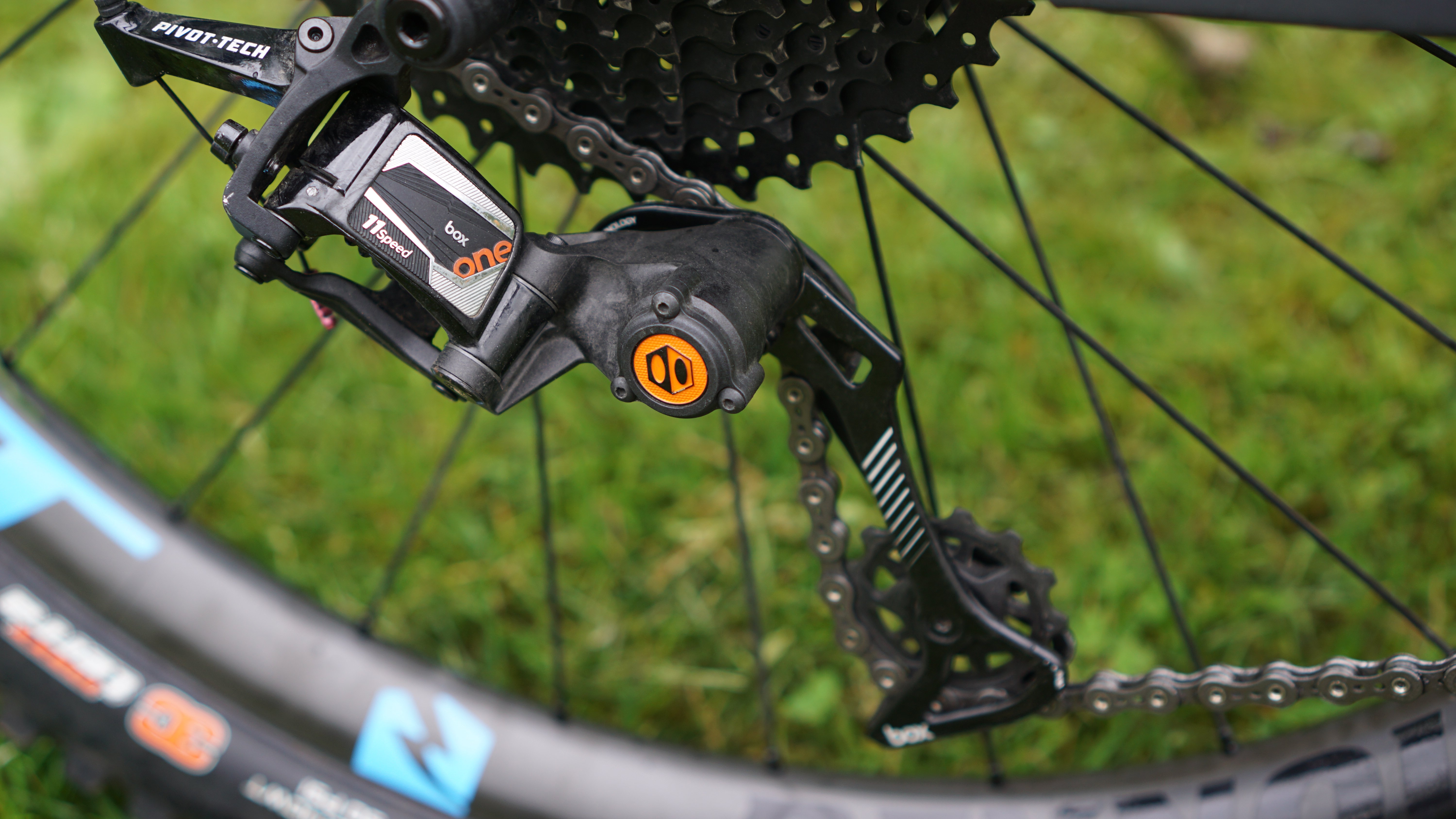 The Box One derailleur. The removable cover shown here is for cleaning the clutch, I couldn’t find any mention of the clutch friction being adjustable.

Riding the Box drivetrain was not as polished as the newer drivetrains from SRAM and Shimano. I found the shifts to be a bit “crunchy”, especially on the downshift. As mentioned earlier the upshifts took some getting used to, but not a deal breaker. The clutch in the derailleur seemed overly light to me and I believe this is what resulted in numerous dropped chains on the Pivot Firebird. Bring your own chain guide. That said I run a chain guide on all my bikes, but with the Box system, the chain was partying around back there harder than a first-year frat boy. Worse still the clutch isn’t adjustable in any way, so it's all party all the time. Pet peeve alert: I couldn’t back pedal in the easier gears.

The derailleur itself felt like it had a lot of play in the pivots after only a couple rides, which brought about some durability concerns. Alas after only a few weeks of use things went a bit pear shaped. While riding down a fast bit of trail in the Whistler Bike Park (A-Line) the derailleur split itself into at least three pieces (with no impact to the derailleur), some of it was still on the swing arm, some was on the shifter cable, and some bent bits were left on the chain. I was going quite quickly at the time, which gave lots of opportunity for the bit wrapped in the chain to stuff itself in the spinning wheel, breaking the chain into pieces, bending a few teeth on the cassette, eating a bunch of swing arm, breaking a few spokes, and then pushing said spokes through the rim tape (which resulted in a flat rear tire). Carnage. 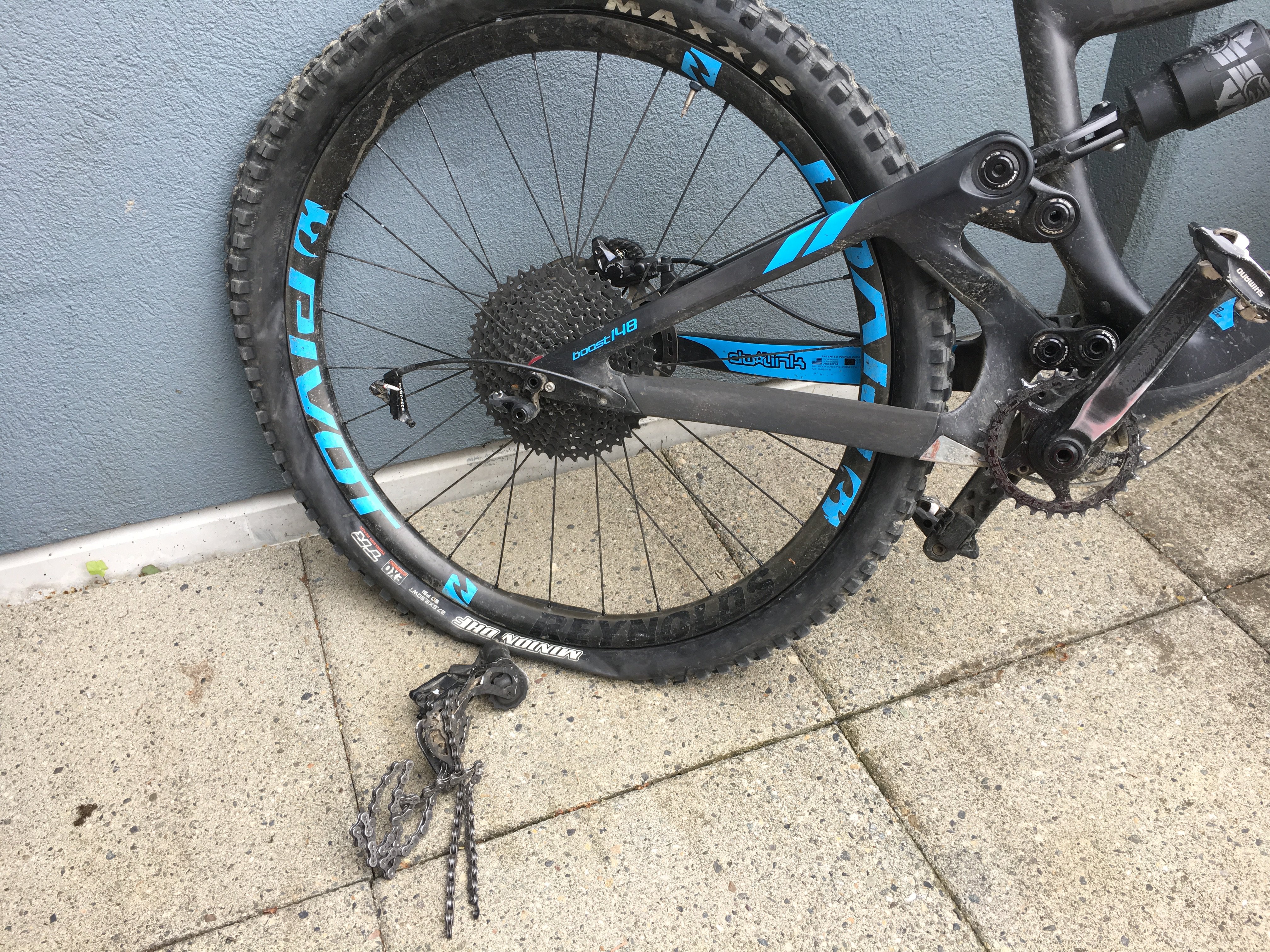 Not a great end to this test.

I really wanted to like the Box drivetrain. I love alternatives in the market place. Unfortunately I found that the Box drivetrain fell short of the other options in the market. Performance-wise the system wasn't particularly smooth shifting, the clutch friction was too light, and I couldn’t back pedal. Cost is inline with SRAM and Shimano’s lower end products, both of which are still quite good. Weight is a bit heavier than the alternatives, but only due to the Box cassette weight. By far the biggest issue with the Box drivetrain is the durability. After only a few rides the derailleur pivots felt noticeably looser than new, and then a catastrophic failure that damaged a bunch of other components after only a couple weeks of riding. All in all; no sale. I certainly hope Box can improve the One drivetrain to be a legitimate third drivetrain option. Until then, I’d stick with the options from SRAM and Shimano.

and on that bike carnage is $CARNAGE$. ouch!  too bad, i wanted to love this underdog product as well.  i must throw in, apropos of nothing those grips look like a form of cruel hand torture to me.

I thought the Renthal Traction grips were mean when I first tested them but when they sent out the Kevlar and Sticky models I changed my tune pretty quickly.

Grip is awesome and they aren't bad for comfort even without gloves.

I think it should also be noted that the BOX cassette is just a rebadged SunRace 11-46T.

This Pivot-Tech(TM)...it sounds ironic. That's too bad--agreed, always fun to root for the upstart.