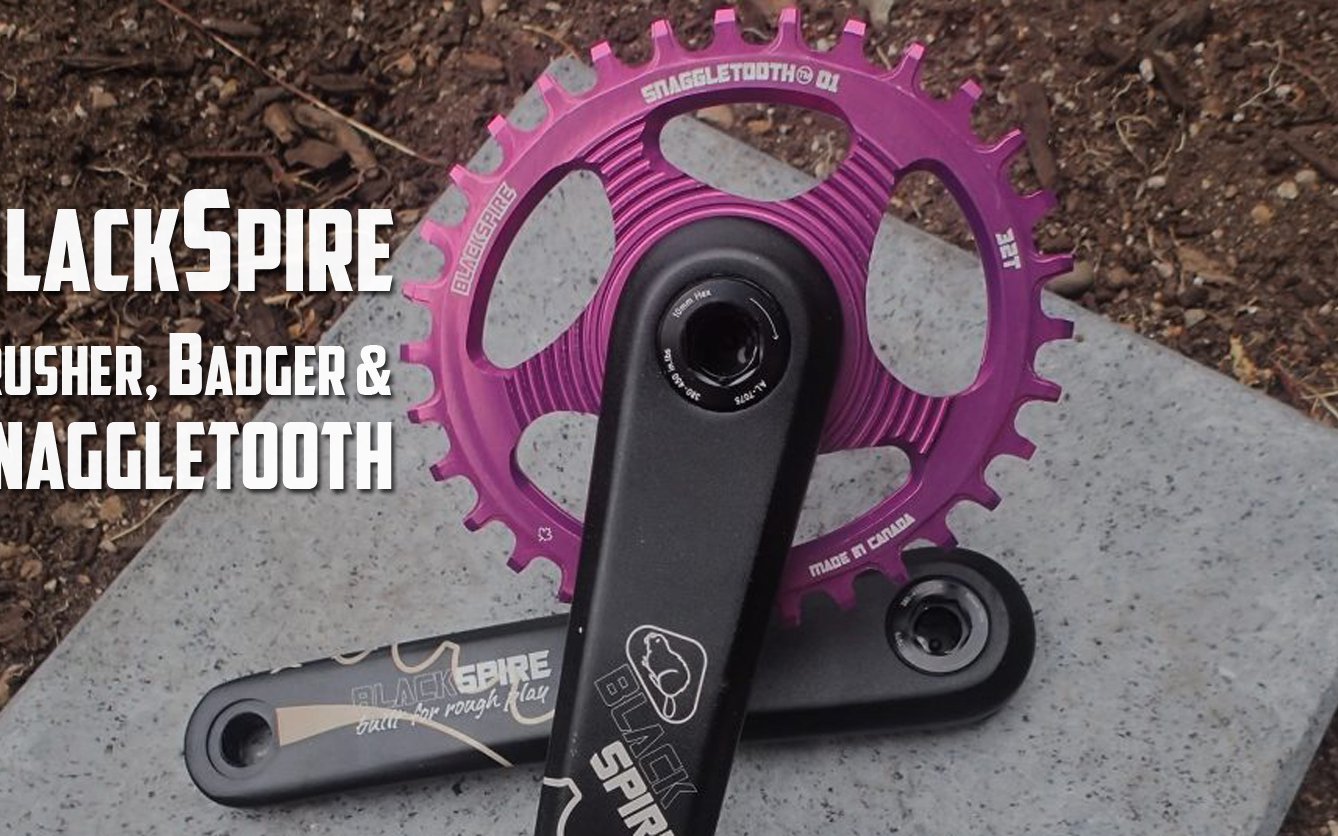 Blackspire is an iconic Canadian brand. They manufacture the majority of their products in Vancouver, BC, and then sell them around the world. Best known for their myriad of chainring and flat pedal options in a wide variety of anodized colours, they also have a popular line of chain guides and guards and now a Taiwanese made crankset.

I think that first and foremost the big story with the aluminum Badger crankset is the price. $165 CAD buys the crankset, bottom bracket with full stainless Enduro bearings, BB installation tool, and a Snaggletooth ring in any anodized colour or tooth count.

The crankset is soon to be available in both a carbon and an aluminum version. The crankarms themselves are made in Taiwan and if they look familiar it’s because the factory makes cranks for a number of other companies.

That price though… $165 CAD buys a Badger aluminum crankset, bottom bracket with Enduro stainless bearings, BB install tool, and a Snaggletooth ring of the purchaser’s choice – oval or round.

I’m on record as not being a fan of plastic BB tool installation adapters. This one is included with each crankset and has survived a handful of installs and removals.

The crankset uses a 30mm aluminum spindle. The non-drive arm includes a bearing preload adjuster so installation is a breeze. The crankarm uses 10mm hex bolts instead of 8mm. It’s not that a multitool can generate the torque necessary to remove an arm on the trailside, but it’s a nice piece of mind if something comes loose on the trail.

The bearing preload adjuster on the non-drive crankarm makes proper installation a breeze.

Blackspire is using SRAM’s direct mount ring system. Which I feel is the best on the market. The splines of the ring interface directly with splines on the crank. Three small bolts hold the system together.

Mine is a pre-production crankset and I came across two issues that Blackspire has fixed for production models. To start off, my direct mount chainring came loose after a few rides. This was an easy fix when I arrived home and all production cranks will come with Loctite on the bolts.

For someone laying down serious watts, or in my case just trying to keep my wheels rolling uphill on my single speed, the Badger is not a stiff crankset compared to others I have ridden. I’m certainly not saying it’s ‘noodly’, ‘flexy’, or even annoying. I do think it bears noting for folks that justify the price of XTR or NEXT cranks based on their stiffness.

At $165 it probably isn’t fair to compare them to top-end products from Shimano or RaceFace but I can’t help myself because I think the cost-to-performance ratio on these cranks is fantastic.

In addition to my usual North Shore ups I also cranked the Badger’s up some steep Kamloops singletrack climbs this summer.

Aside from the aforementioned Loctite and stainless bearings, both changes for production, the Badger cranks have been awesome.

I’m a notorious heel rubber and the black finish on the arms is definitely starting to show signs of it; however, they look WAY better after months of abuse than my otherwise excellent black Shimano XT M8000 cranks did after two rides. If I had a choice – just like if I had a choice with XT – I’d prefer the cranks in silver. All rides considered, they look pretty good for what they have been through.

The Badger arms are showing some decent cosmetic wear from both my regular heel rubbing and also a tonne of unexpected meetings with rocks in the dark thanks to lots of riding with lights as part of my regular dad patrol rides.

They’re cranks, they work great, the price is very good, and… they come with a great chainring.

It’s their Vancouver-made chainrings on which Blackspire has long built their reputation. The rings are popular for their quality and the huge number of bolt patterns and bolt circle diameters – both living and dead – that they choose to support.

Included with each Badger crankset is a Snaggletooth narrow wide ring of the rider’s choice. As always, I was tempted by the option of anodized purple. They also offer these rings in black, red, blue, lime green, orange, and gold.

My oval experience on the one-speed was definitely more interesting than any of the geared bikes I’ve ridden with non-round rings. I notice I spin smoother circles when seated (in too high of a gear or spun out) and, once I adjusted the timing of my power stroke a bit, I like how torque is applied on steep and loose climbs.

Wear has been very good. The anodizing is certainly not as durable as my experience with Renthal‘s ring but the ring itself still works fine after months of abuse even if it looks beat. It’s also available in significantly more configurations than the 1XR, not to mention the oval option.

The Crusher bash guard is a great bit of peace of mind. It offers protection for expensive 12-speed chains and the narrow wide rings they glide on. It’s available in ISCG, ISCG ’05, and behind-the-cup BB mount and sells for $54 CAD.

It works exactly as advertised, was very easy to install, and I’ve smoked it on enough stuff at this point that it has my complete confidence.

Front side of the 26-32t Blackspire Crusher bash guard. Available as ISCG, ISCG ’05, and BB mount for BSA. Simple to install and it simply works.

I did have to ‘re-shape’ the front of it a little bit to function with the 32t oval Snaggletooth without any contact. That’s a preferable choice to going up to the larger bash taco size and the corresponding decrease in ground clearance. It was a quick and simple job.

Backside of the replaceable bash taco on the Crusher bash guard.

My Crusher has all the signs of a plastic object that has been regularly abused into rocks and roots but it still appears to have infinite life left. It comes in a slew of colours and weighs about 80grams as seen.

The Crusher is an easy sale to me. It works with every direct mount ring setup and crank BCD as long as a frame has ISCG/ISCG ’05 tabs. It’s quick and very easy to set-up. I’ve smoked it enough times, that would have been ring/chain, to think that it is going to save money in the long run.

Who is the ideal candidate for the Badger aluminum crankset? Anyone doing a custom build on a budget would be remiss not to consider the $165 price tag including the Snaggletooth ring of their choice and a BB with quality bearings. That’s a potential savings that can be spent on a notable upgrade like brakes or suspension.

I also think it has good potential as an upgrade or replacement for riders with cheap cranks on lower end mountain bikes interested in going 1x. A Snaggletooth ring alone is $65 CAD. Definitely it is worth looking at.

You mention this not being the stiffest crankset. How does it compare to the XT?

Same frame, same XTR pedals, standing on the pedals cranking up a steep incline reefing on my 800mm bar, in a fairly stiff gear ratio I'd say the XT M8000 and M780 cranks I own are stiffer under heavy load. That's not saying the XTs are the stiffest cranks on the market and it's not saying the Blackspire Badgers are noodles.

Ugh, Living Room Bikes, they're the worst. Bodged so many jobs over the years, must be all the beer. ;D

Ha! No kidding. Like the time they spilled Magura blue Mineral oil all over my light coloured carpet. Jerks.

It's a wonder I keep going back!

Sorry what? "My oval experience on the one-speed was definitely more interesting than
any of the geared bikes I’ve ridden with non-round rings."

I notice the effect of the Oval chainring a lot more on my single speed than I have on any of the multi-geared bikes (hardtail + a few different suspension designs) I've ridden.

I think I'm going to try this on my SS conversion I'm doing.

I'm also going to use a Blackspire Stinger as a tensioner for this attempted SS conversion. We'll see how that goes.

The Stinger works fine as a tensioner with ISCG tabs. I swapped their roller out for a pulley wheel which reduced drag.

If you haven't bought one/got one already the best tensioner I've used for converting hardtails is Rennen's.

More riders I've talked to who have tried Oval rings SS like them than don't… but I do know a couple guys who have gone back to round so I'd suggest it's worth trying both.

What frame are you converting?

Please tell me how an Oval chainring works on a single speed bike without a tensioner, which I believe is the setup you currently have on your bike….

And I went with the Stinger because it was nice and clean looking. No dangly thing on your derailleur hanger.

Correct, I do not run a tensioner. In my experience concentricity is never perfect so every single speed drivetrain will have 'tight spots' and 'loose spots'. I find the tight spot in the drivetrain and tension to it (leaving enough slack so the bike can flex without the chain restricting it).

Oval ring is exactly the same situation. Nat ran the math and determined that the difference between max/min ellipses due to triangulation is .02″.

The combination of .02″ and concentricity means the 'loose spots' are greater than with round rings but certainly not enough to make it a set up or retention issue.

I do find I tension my chain more frequently through its life with Oval because of the larger difference between tight/loose.

Makes sense! The Rennen tucks in tight (doesn't dangle) but it does still mount off the hanger.