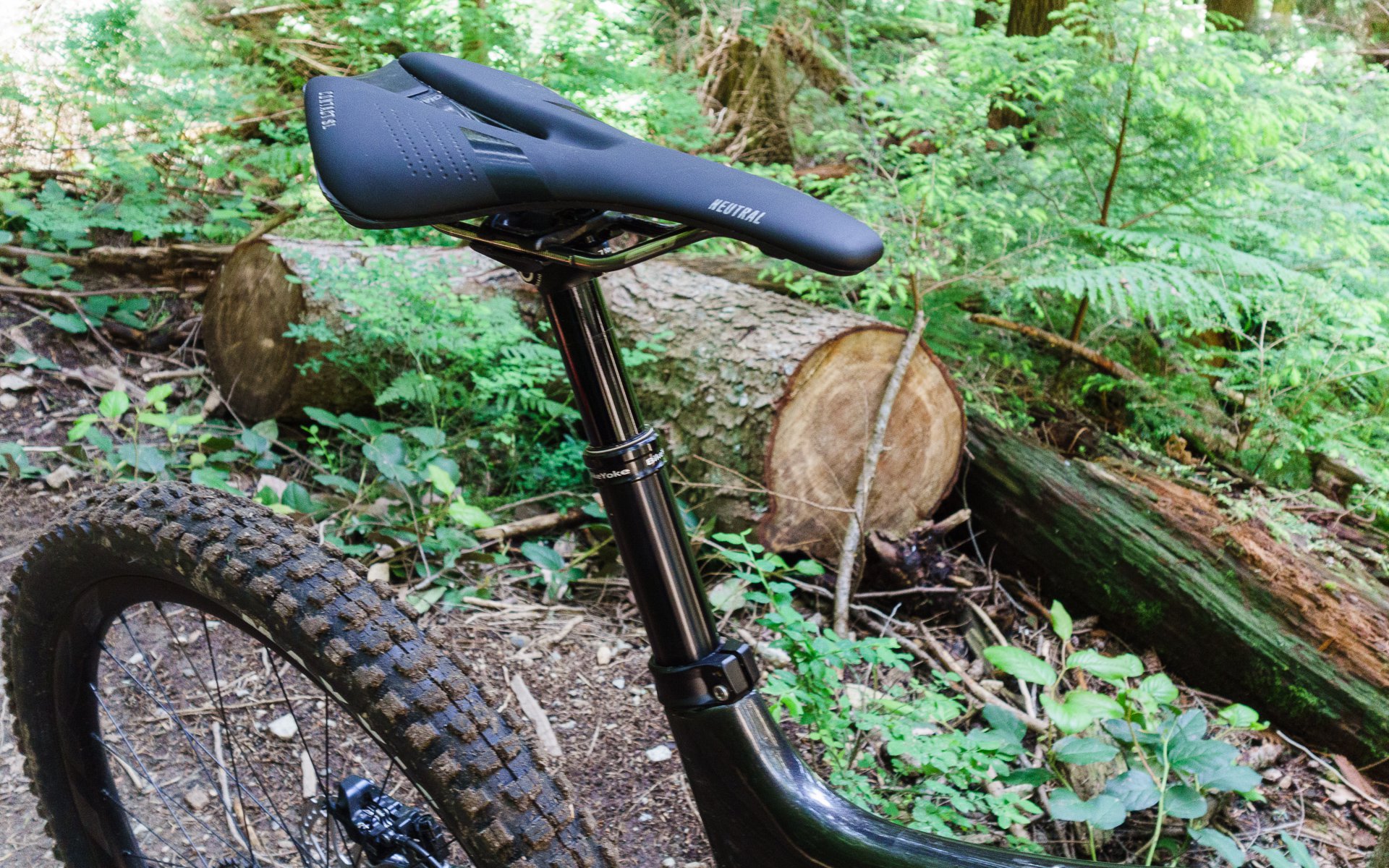 Two years ago I was very impressed by BikeYoke's Revive dropper post. In our teardown as well as on the trails it proved to be a well-designed, reliable and user-friendly post with its on-the-fly bleed function as the main differentiator. Even at around 500 CAD, I thought it was a good value proposition and gave it my recommendation.

After writing the review, I continued to use the Revive for another 10 months without any issues. Jeff at Wheelthing then performed a full service and, apart from the oil being a bit gunky, the post appeared to be in excellent condition.

BikeYoke's goal when designing this newest dropper post was to pair the reliability of the Revive with a lighter weight and a lower price. Based on the Revive chassis, the Divine has completely new internals, is 30g lighter and comes in about 40 CAD cheaper too.

Earlier, Andrew and Jeff did a teardown of the Divine and were amazed by its simplicity. I highly recommend you read it before continuing here with my experience installing and using the Divine. 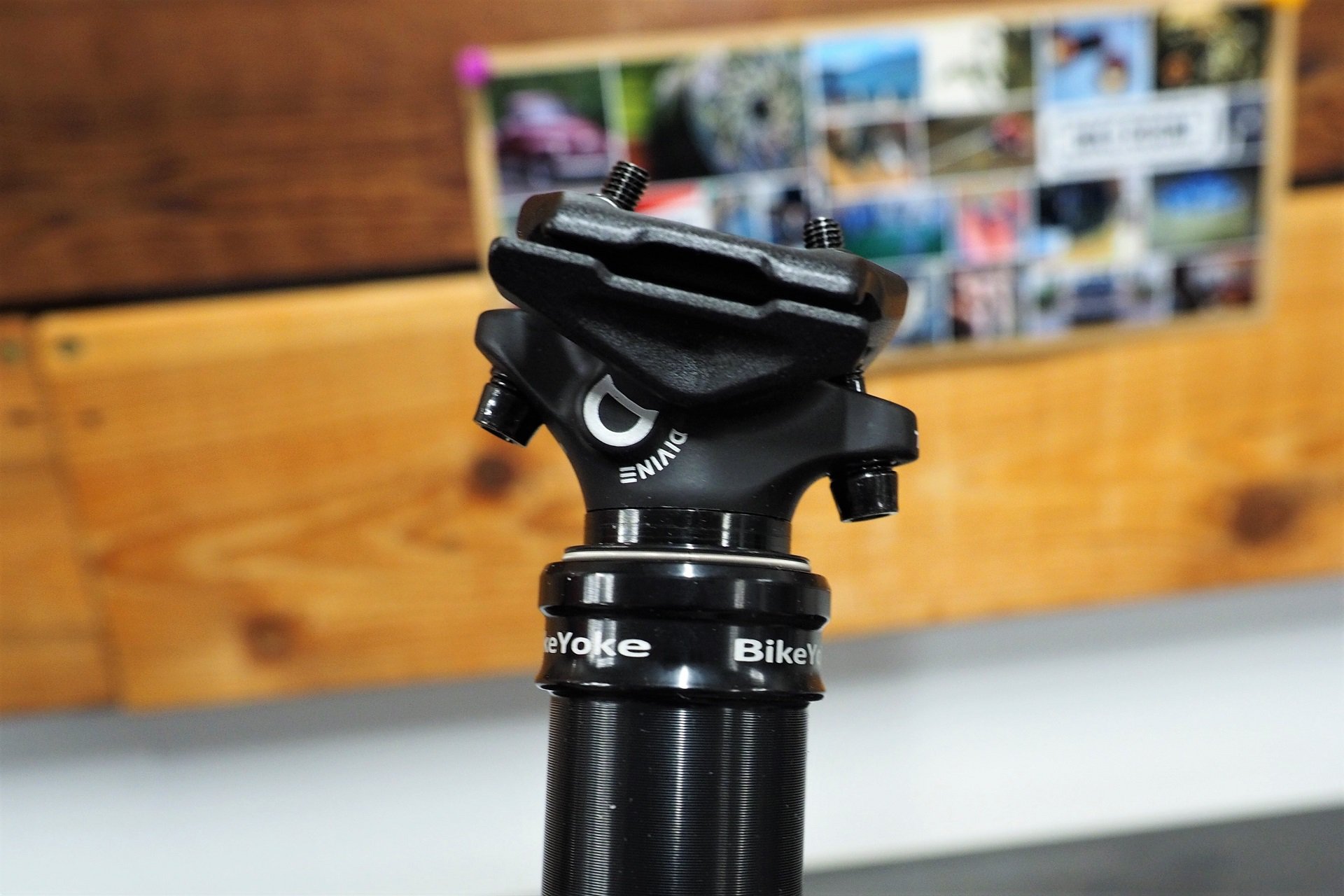 The Divine does away with the "Revive" lever and auto-resets on every bottom-out. Photo: Andrew Major 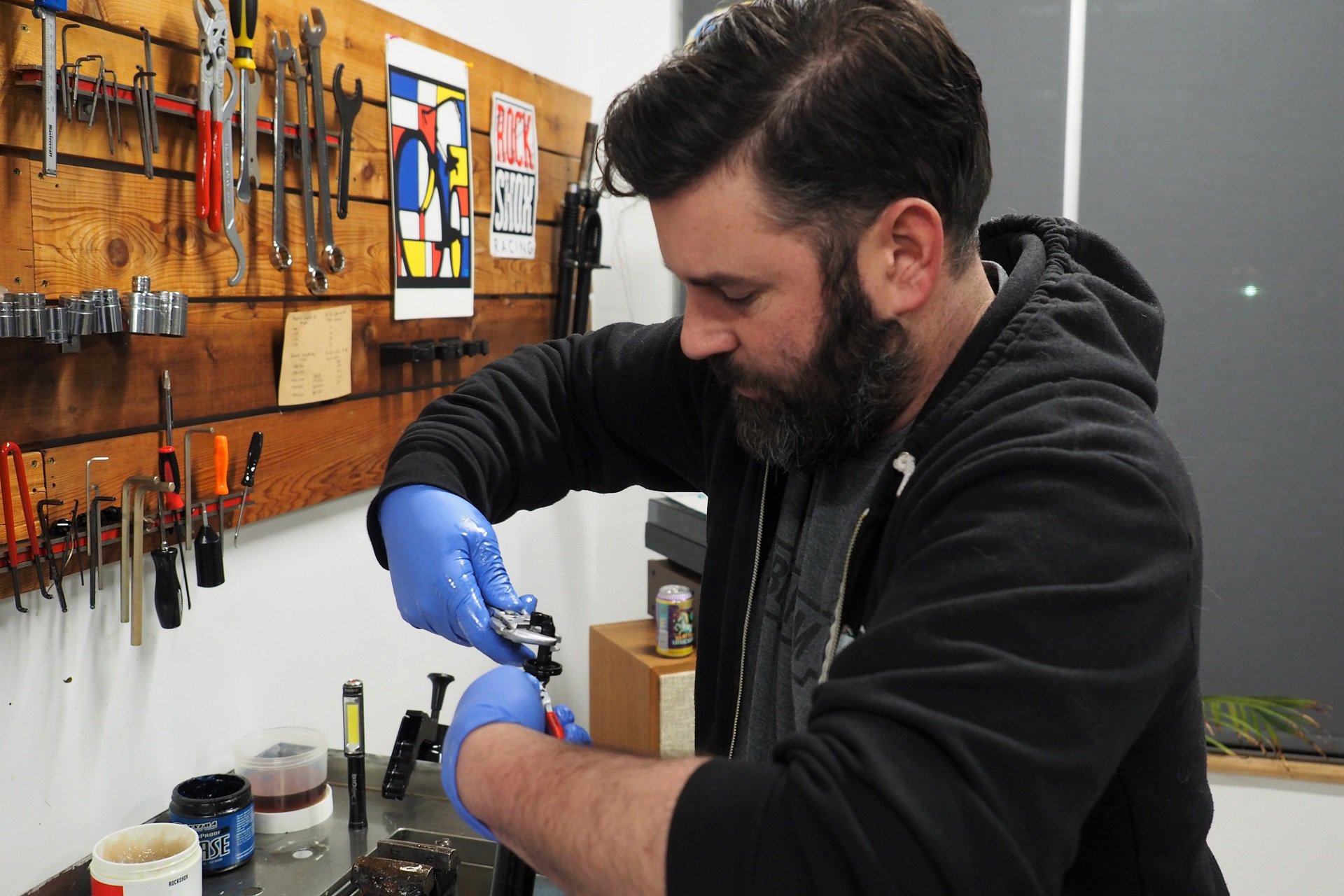 According to Jeff at Wheelthing, working on BikeYoke posts is a pleasure. Photo: Andrew Major

From a user's point of view, the most prominent feature of the Revive was the tool-free bleed on-the-fly feature. The Divine takes this feature to the next level by completely doing away with the lever and magically performing the 'reset' every time the post is fully bottomed out. Brilliant!

Otherwise, the Divine is very similar to the Revive in terms of features and focus on user-friendliness and reliability. It's available in 125, 160 and 185 mm travel and 30.9 and 31.6 diameters (but not in 34.9 mm). To further help fit the post in any frame design and size, the bottom part is rotatable and the maximum extension can be reduced in 5 mm increments using a clip-on spacer. The Divine is fully user-serviceable, does not require any proprietary tools and spare parts are readily available. Finally, it's sold with or without BikeYoke's 'Triggy' remote.

For this review I chose a 160 mm 30.9 unit to fit my trusty Giant Reign 27.5. Although I had a new Reign 29 on the way which would fit a 185 mm, I wasn't sure when it would arrive so I went with something that would fit both bikes. This turned out to be a wise decision as the pandemic delayed delivery of the new bike. 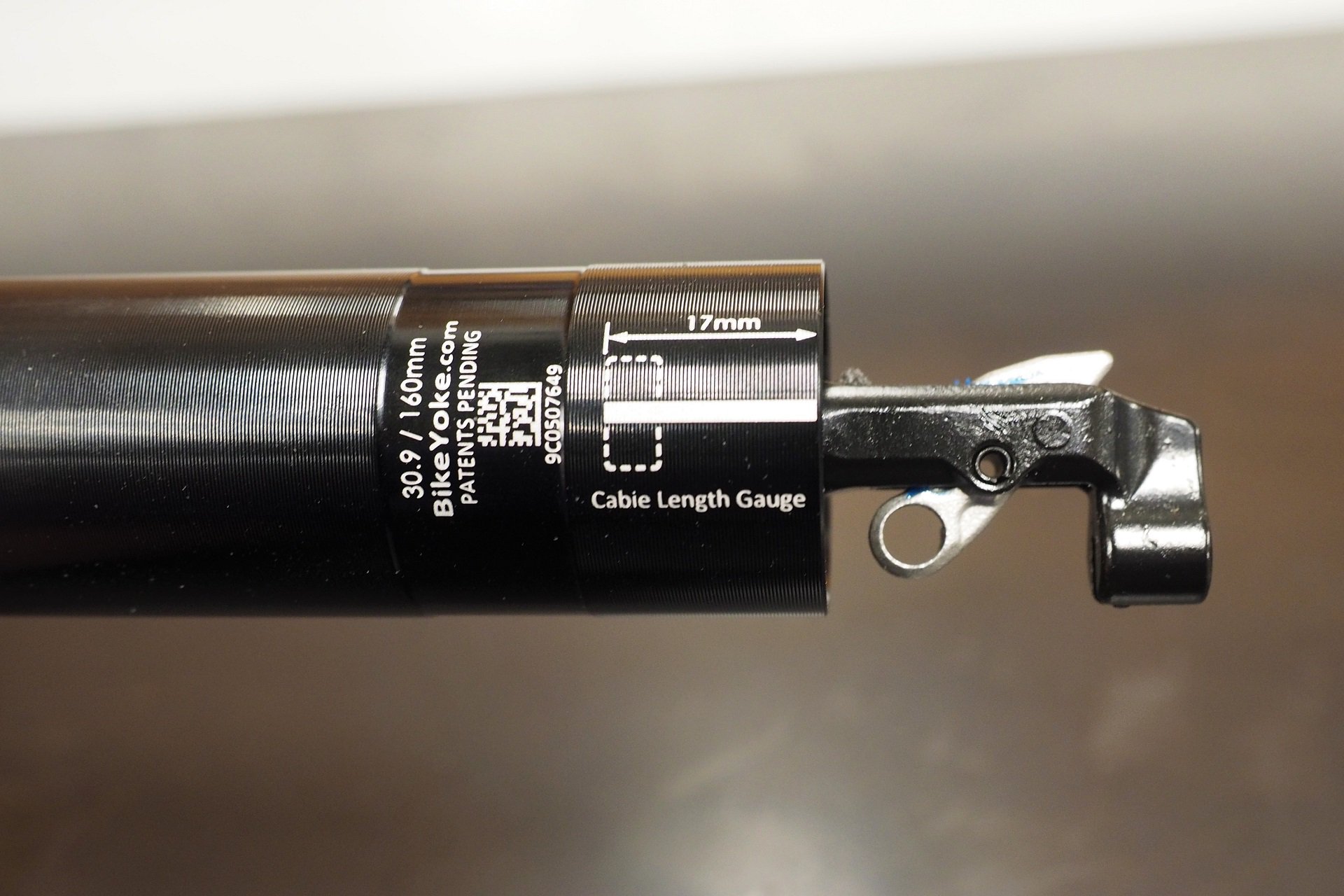 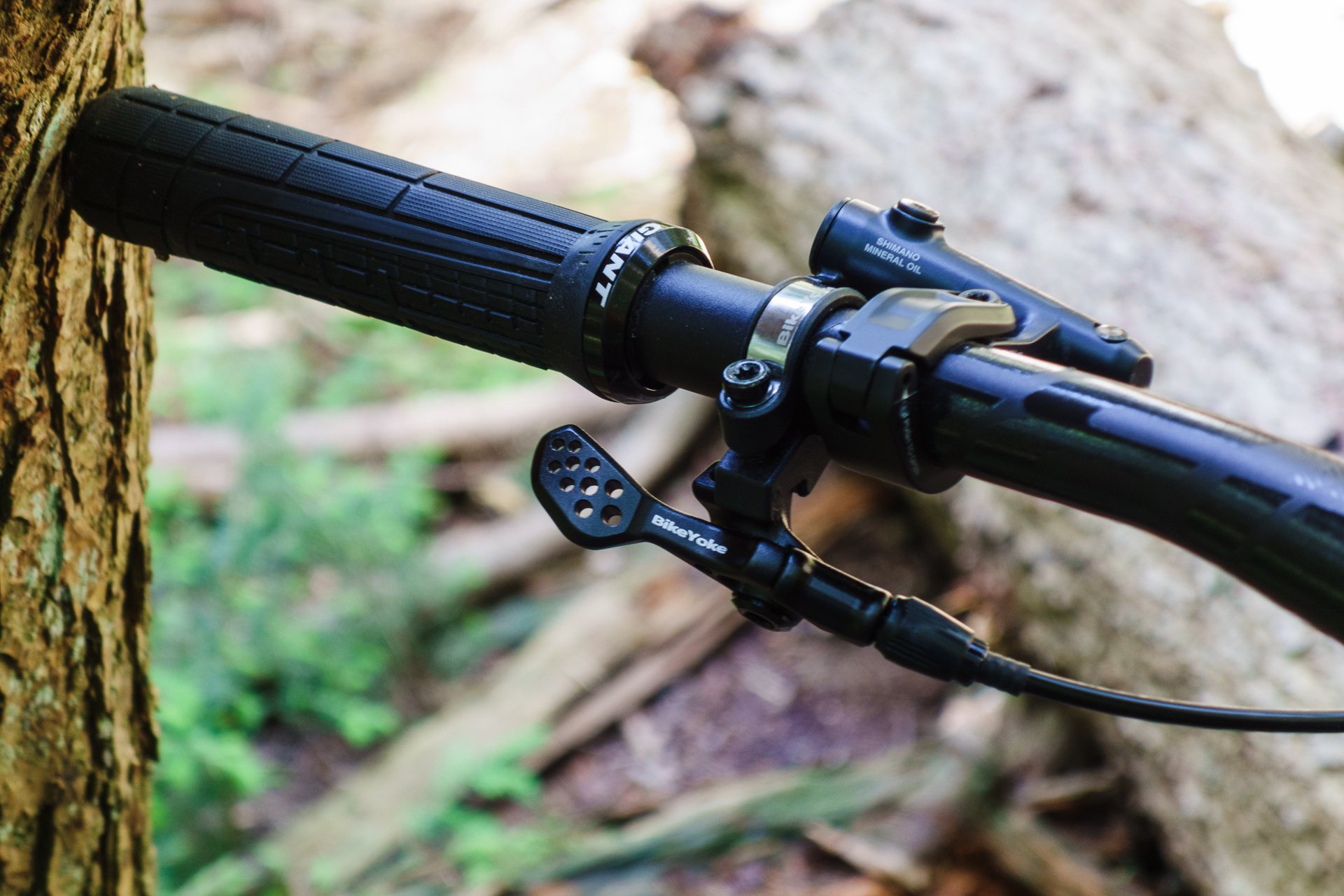 The Triggy remote on the supplied clamp next to a new SLX brake.

With the Divine having the exact dimensions and using the same remote as the Revive that was still on my bike, installation was a straightforward drop-in replacement. I left the supplied remote, cable and housing in their packaging and simply connected the Divine to the remote already in place. The head of the Divine is also the same as the Revive's so fitting and positioning the saddle was a matter of replicating some measurements I'd taken before.

Towards the end of the test, my new bike showed up and I did a full installation from scratch. It was exactly the same as described in my review of the Revive. The important steps are determining housing and cable length and fitting the cable to the actuator. With the help of the manual and the laser-engraved markings on the bottom of the post, it shouldn't really present any problems for the average home mechanic. Unless you accidentally drop the cable stopper in your frame's seat tube and spend far too long fishing it out. Which I absolutely didn't do.

After the installation, I immediately ran into a minor hiccup; the moment I sat down on the saddle, I noticed the post sagging a bit. Riding over some bumps, it was behaving like a suspension seatpost! Unfortunately, bottoming out the post to reset it didn't help.

After some head-scratching, double-checking the cable routing and resetting the post a couple more times to no avail, I reached out to Sacki at BikeYoke. An hour later I received an email containing a careful analysis of the problem and its possible causes. Turns out that while the Revive operates at 200-250 psi, the Divine needs 300-350 psi. Go under 300 psi and the post won't be able to support your weight. After the teardown and rebuild, we had assumed the air pressure requirement would be the same as the Revive's and set it to 250 psi. Had we bothered to read the manual or check the FAQ on the BikeYoke website, we would have known. Our ignorance exposed, we quickly added some air and the problem was solved immediately. Note to self: RTFM!

Obviously, the Divine comes out of the box properly pressurized so you won't have this problem. If you want to experiment with the air pressure, a decent high pressure shock pump with a long stroke is recommended. 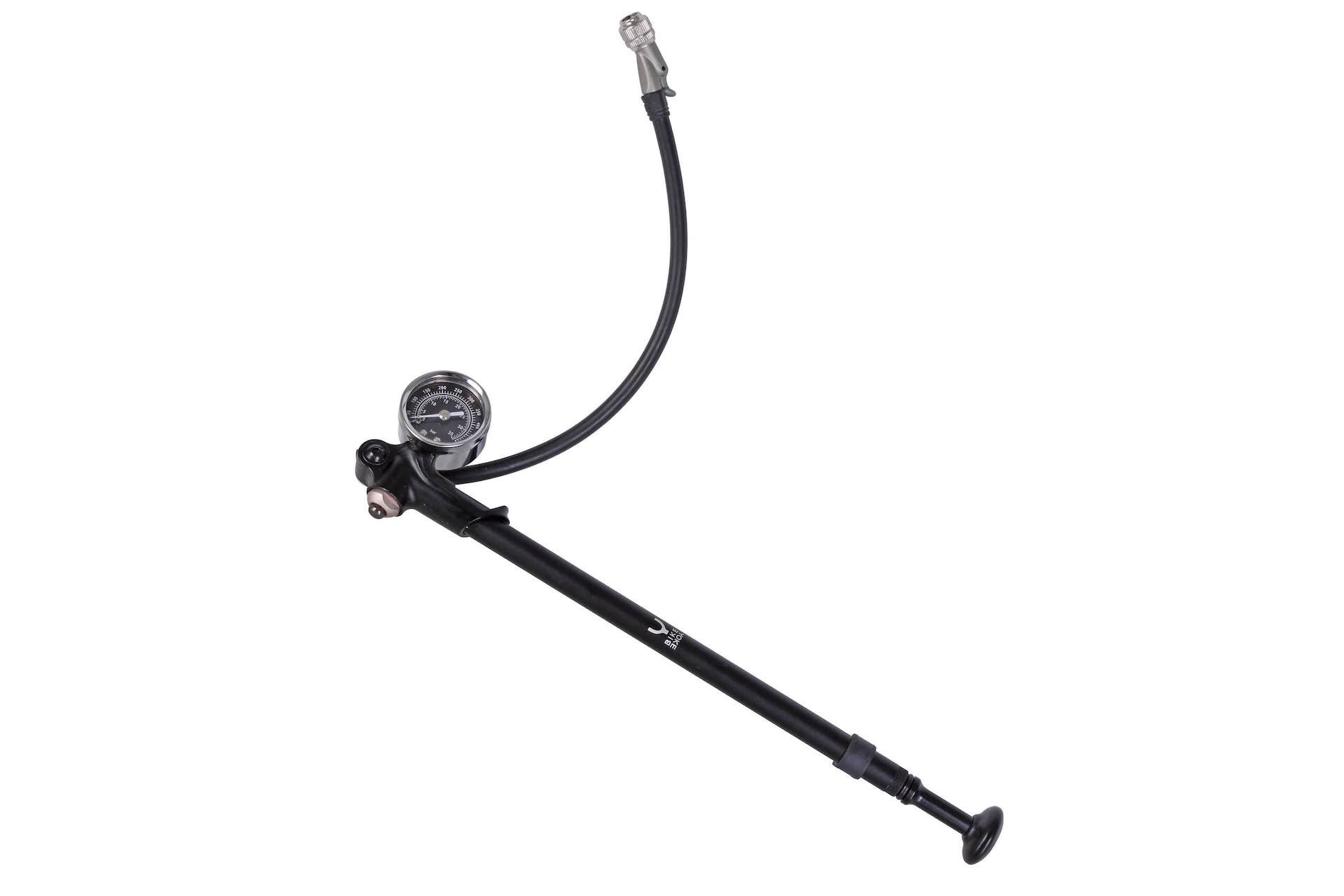 BikeYoke's pump has a longer stroke and allows higher pressures than most shock pumps on the market. Photo: BikeYoke

With the air pressure sorted, the Divine felt rock solid. Compared to the Revive, it's slightly less smooth and it tops out with a more audible clunk. Otherwise, everything felt very familiar after having used the Revive for over a year.

Out on the trails, the Divine went down when I wanted and went up when I wanted. I found the clunk at top out reassuring while riding and actually preferred it over the stealthiness of the Revive.

Testing coincided with the Covid-19 pandemic and was limited to the North Shore trails that weren't closed. I figured early morning rides on Cypress were probably the best way to avoid crowded trails. With several different droppers I've previously experienced occasional inconsistent behaviour on Cypress in late fall to early winter conditions, possibly due to quick elevation and temperature changes. Nothing serious, just inconsistent return speed and very minor sag off the top. I experienced this with the Divine at one point but, as with other posts, these minor issues were temporary. I think Cypress Mountain is my dropper post Bermuda triangle. I'm really only mentioning this because I'm struggling to say anything negative about the Divine. It's been a very reliable performer overall and simply does its job. And every time I bottom it out it gets bled without me even noticing. 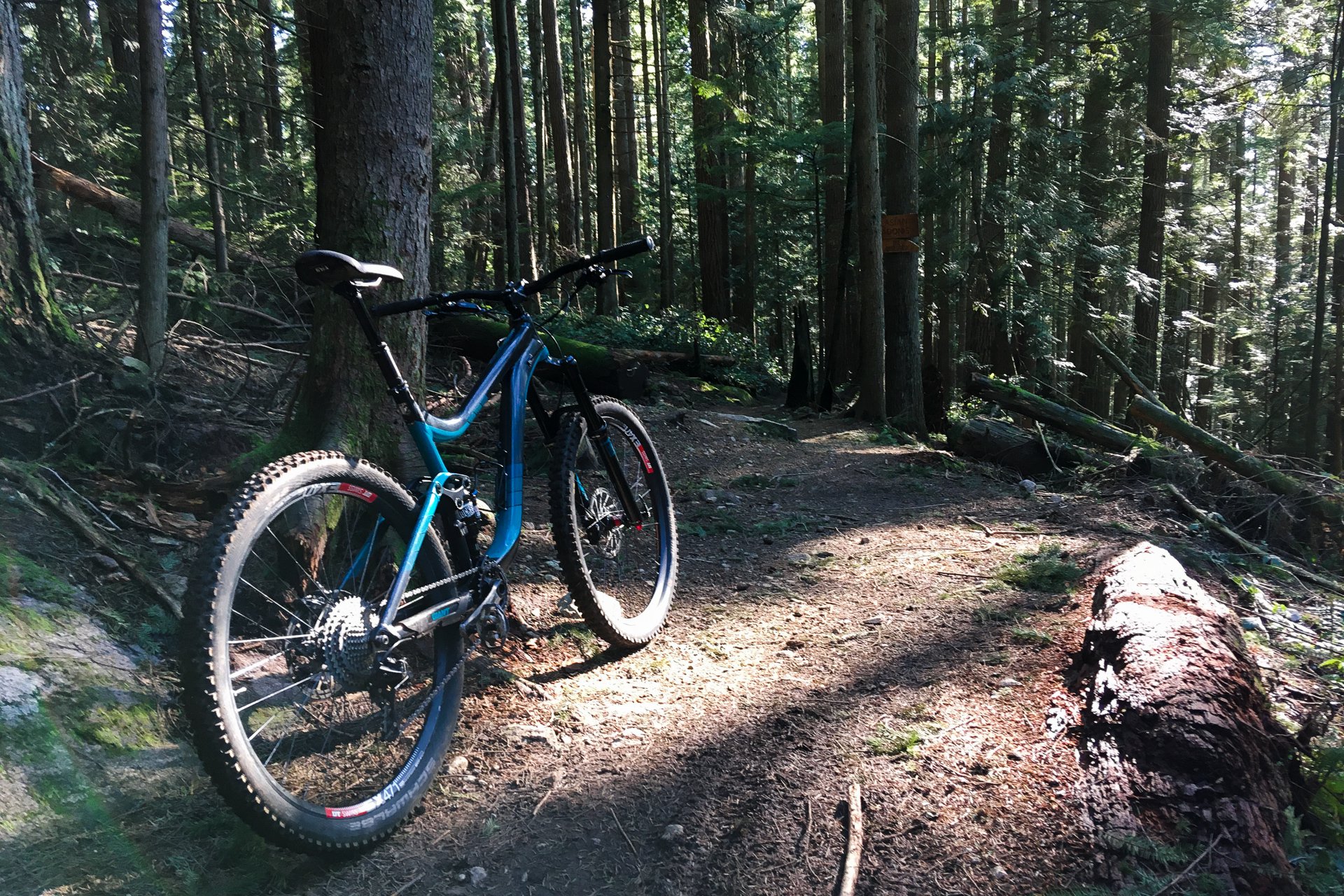 For most of the test, the Divine was fitted to my trusty old Giant Reign 27.5. 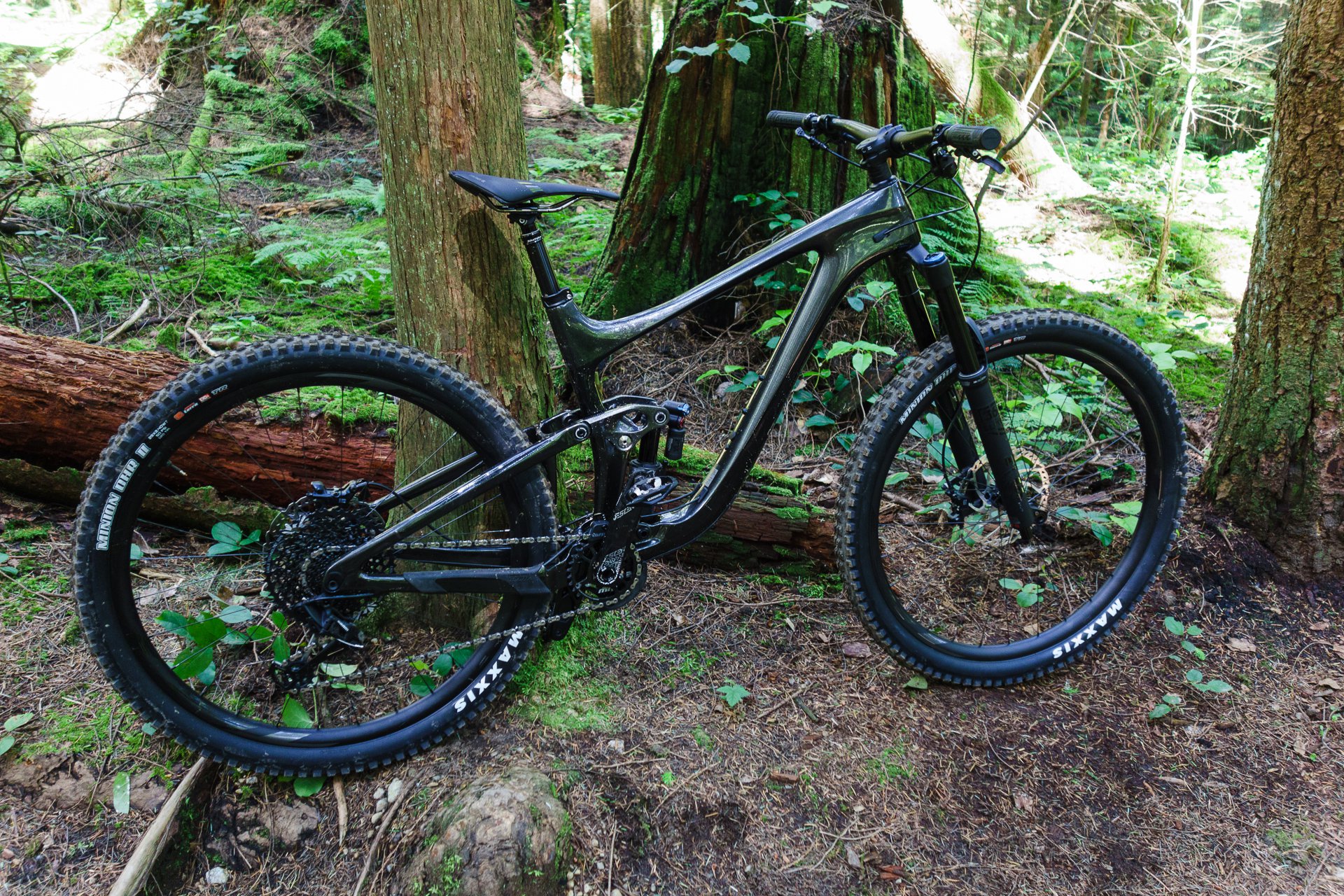 A couple of weeks ago, the post moved to the new Reign 29. The 185 mm version of the Divine would have been even better.

BikeYoke may market the Divine as a cheaper and less sophisticated version of the Revive but in practice, most people will hardly notice the difference on the trail. In addition, the auto-reset makes it even more user-friendly. Reliability, serviceability and availability of spare parts are all on par with the Revive.

At a price roughly between C$370/US$270 and C$480/US$360 (depending on model), the Divine is a bit cheaper than the Revive and still a bit more expensive than some of the competition. I previously discussed the value proposition of BikeYoke in my review of the Revive and the Divine improves on that by delivering almost everything the Revive does and adding auto-reset, for less.

If you are looking for a high-quality, user-friendly and serviceable dropper post, I recommend putting the Divine on your shortlist.

BikeYoke sells directly to consumers worldwide through their website.

Why All Dropper Posts should be 34.9

We still believe 34.9 is the future, unless a stupid other standard is created. 34.9 is an existing and well known standard and offers all we want/need in terms of strenght and stiffness to create drops up to around 230mm. More travel is maybe not nonsense but it would require a lot of compromises for the frame design, too, so it does not really make a lot of sense.

34.9 offers great balance between stifness and weight.
REVIVE 160/34.9: 590g
Fox Transfer (2020) 150/31.6: 585g
Despite 10mm more travel and a 34.9 oversize structure, the REVIVE MAX weighs more or less the same as competitor of the world's probably best bicycle suspension manufacturer. There is not a lot of weight penalty on a 34.9 platform, but the performance gain is immense.
Why don't we have a 34.9 DIVINE?
We do have it ready in the box, but we simply can not afford another product line without other/more bike manufacturers jumping on the right train or at least getting an OE deal, which would justify our invest this complete new product line. This is expensive!

Thanks for chiming in, Sacki! Do you hear that, bike manufacturers and product managers?

Could we get the Revive in a 200mm drop while we're at It?

Let me swing my magic wand and give me a couple more weeks. 200mm is a little short though, don't you think ;-)

the prophet
2 years, 1 month ago

Specialized Enduro, selling like joints on 4/20, S-works post is pathetic, hella deep pockets, get Sloan on the phone

One Up is the only option I could find to get 170mm drop on the S2, works well but pretty heavy and clunky.

Didn’t Sacki tell us that 34.9 was the way to go in a previous NSMB article literally titled “why all posts should be 34.9”? I’ve wanted one of his droppers for a while but had to spend the extra on the Revive because the new post isn’t available in the larger size.

I’m not really complaining as I love the post but I did think it odd.

Any thoughts on the “Suspension Post” Feature of the Devine? As a hardtail rider I thought that it sounded kind of cool.

The REVIVE just has superior performance over the DIVINE and you can feel it on the remote and on the post itself.

You can express it very easily in numbers. The REVIVE requires about 25% less force on lever and 35% less force on the drop force in factory settings. You can caclulate by the difference in pressures plus a little bit of more friction on the dynamic seals, because they are much bigger.
Although the DIVINE is on par with other posts on the market, the REVIVE is playing in her very own league in terms of smoothness drop forces.

People who have not tried a REVIVE before won't really bother, but I have also heard of people who never had a problem with the original Reverb Trigger or plunger remote - until they tried a proper remote.

I can definitely feel the smoothness in comparison to the shiny gold post that I had before :)

I guess it's just strange that the lighter post with the automatic bleed is the cheap one.

Have the Revive on two bikes, love it. The Divine seems awfully close to the Revive in terms of price though, there's only about 10% in the difference. Kind of odd to have two product lines with so little to differentiate them (especially when the cheaper one has the auto bleed, and the more expensive one doesn't)

Will the REVIVE get an auto bleed feature?