The BC Bike Race caravan squeezed out of the Squamish bubble this morning and headed north on the Sea to Sky Highway for it’s final stop at Whistler. A week of camping in tents, eating communal meals, sharing trails, cleaning bikes, adjusting shifting, riding on BC Ferries, and asking for advice about the next stage are over. Riders, BCBR crew, and spectators took over the Whistler Olympic Plaza for the last day of the BC Bike Race under perfect skies and only an occasional cloud as the event helicopter buzzed overhead. It seems fitting that the race would end in the place that is probably pushing the modern boundaries of mountain biking further than any other place in the world. The BCBR is also challenging so many different realms of the mountain bike racing experience. The level of care for every rider and their experience questions the idea of what a mountain bike race should be. Is this a race or a guided tour? Is it normal to call your racers “customers” and treat them like friends, with respect and deliver a product that is a challenge to them without insulting their personal experience? 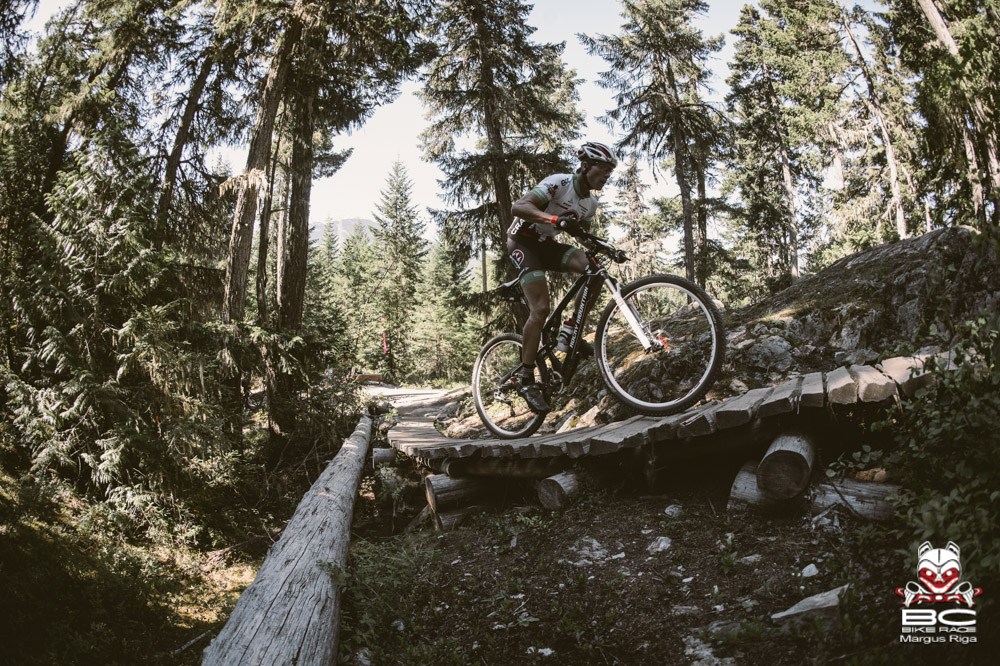 One of many wooden structures in the Lost Lake Trails.

Andreas Hestler Marketing Director of the BCBR “We enjoy the race at the front but in the end it’s not about the finish position of the rider, it’s about the progression of that individual as a rider and a person. The BC Bike Race has taken a lot of people to new levels of riding even if only for the need to survive to ride another day.” 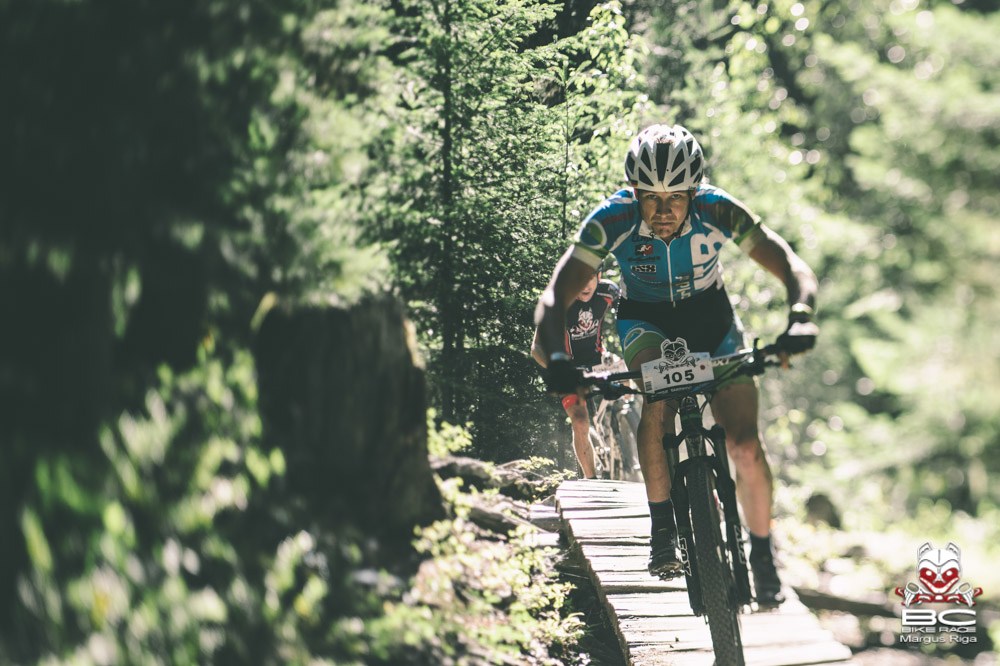 Sonke Wagner may not have his usual smile, but thats because he’s about to get 8 stitches when he crosses the finish line from an ealier crash on Crank it Up.

The BC Bike Race says “here is the best singletrack stage race in the world” and then a hand is offered in the form of guided support but no one is going to ride the bike for you. The BCBR is a nurturing environment and throughout the week the transition the riders went through manifested in multiple ways. From gaining confidence riding bridges, rocks and roots, to figuring out how to accept that the person who keeps falling behind on the climb is going to catch you on the descents. A one day race rarely gives riders the time to recognize the others around them and see everyone for their strengths and weaknesses. Throughout the week the BC Bike Race simultaneously increases many people’s confidence and humility in themselves. 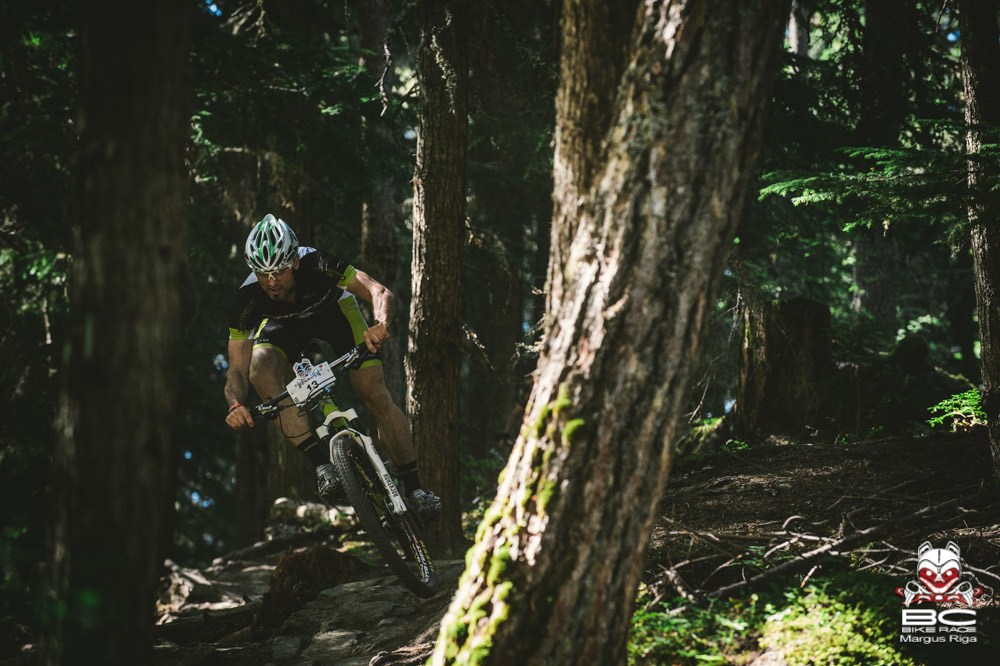 Hugo Bardou (Xprezo) makes bikes and knows how to use them.

“It was the best week of my life on the bike. I was so frightened of the length of the race that I just had to train very hard before the race back in Mexico. I was expecting so much pain but it was pure reward. The organization was fantastic. I exceded all kinds of expectations of myself.” Bernardo Martinez-Negrete, Mexico. Bernardo’s experience was retold in multiple languages on the finish line. 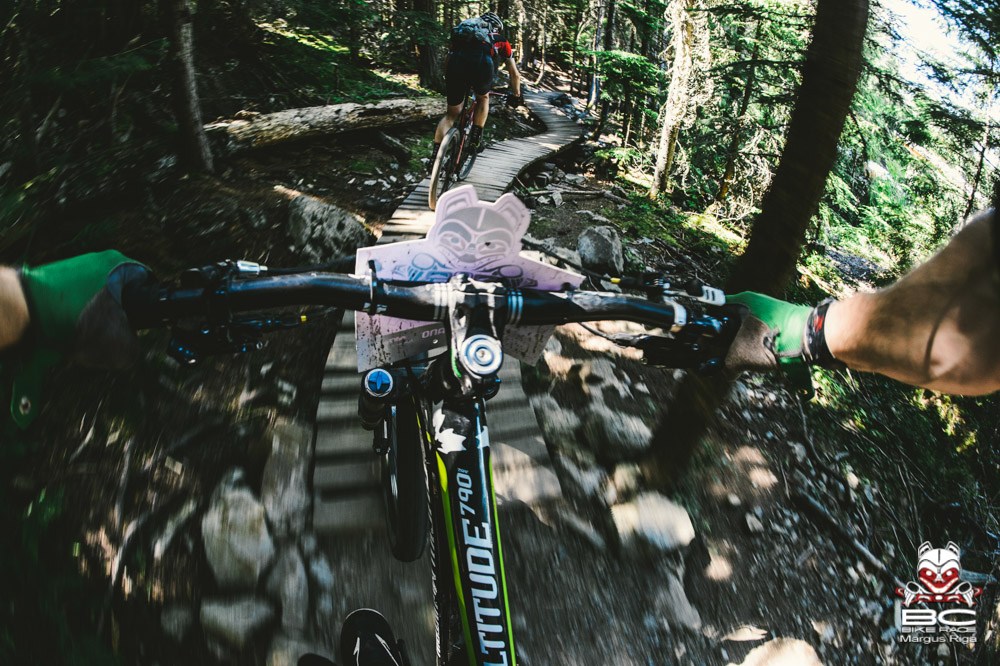 B.O.B aka Bear On Bike, the BCBR logo, leads the way for all riders.

The BC Bike Race has no prize money yet it annually brings in some of the best professionals in the world dedicated to races that are on singletrack and challenging. This year’s podiums were full of riders from other countries looking for the opportunity to test their trail riding abilities. 2013 was shaping up to be an epic battle for the winner Kris Sneddon (Kona) before last year’s champion pulled out from a stomach bug. Sneddon showed poise in the face of the challenge but when he was left facing an easy win with two days to go he immediately switched to supporting another member of his team, American Spencer Paxson. 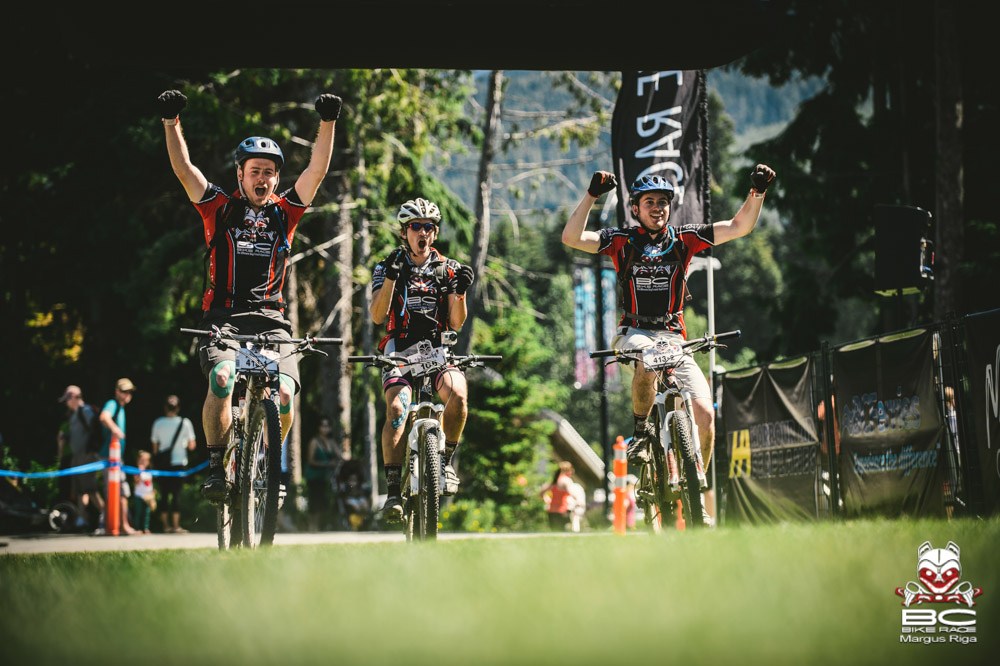 There are no official teams of three but you might end up making it one if you jive right.

Paxson won the stage with Skovgaard in second and the overall champion in third a second back. Paxson finally got a stage win to add to his four third place finished and secured 2nd overall. “I’m thrilled, it feels so good to affirm that I can do this kind of riding now, and to add another discipline to the quiver.” When asked about the final sprint he said he had scouted the finish thinking a sprint was highly possible. As predicted the three came towards the final turn to the finish and Skovgaard got caught on the outside and overshot the turn into the finish line. 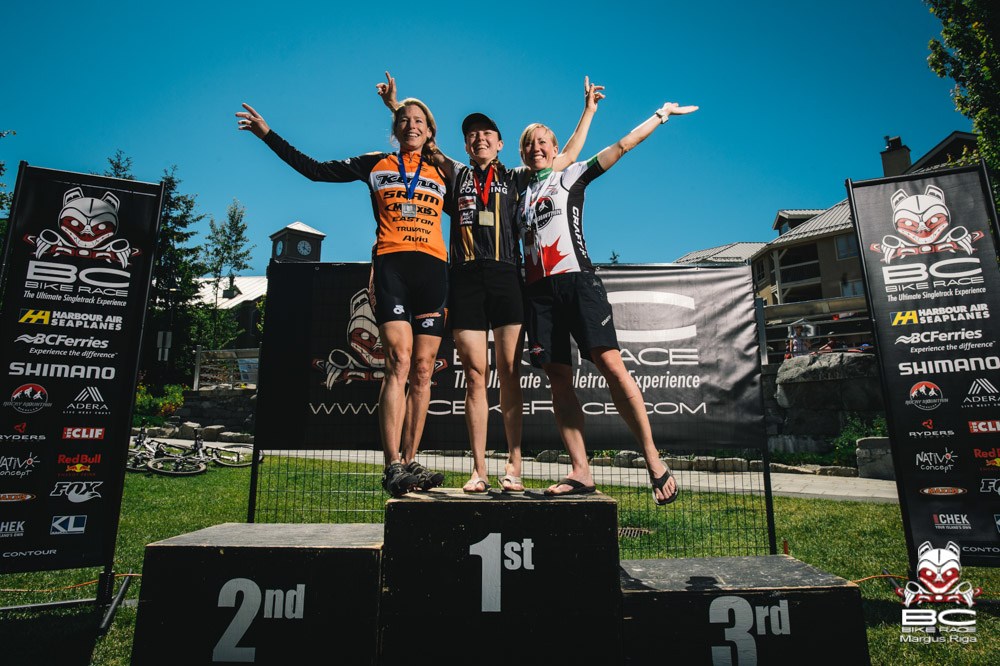 The overall was taken by Wendy Simms (Kona) for the second year in a row, but her antagonist of the week New Zealander Kim Hurst (Mud Cycles) finally had the day she fought for in the previous stages while securing second place overall. Whistler provided a course that Hurst could create a gap on the climbs that couldn’t be reeled back in by Simms.

“I just didn’t have enough downhill real-estate to catch up. She took off really hard up the hill. I told her it was a really good day for her, but she earned every inch of it.” – Simms

Third overall went to Trish Grajczyk (Deadgoat Racing) but she was second on the Whistler stage. 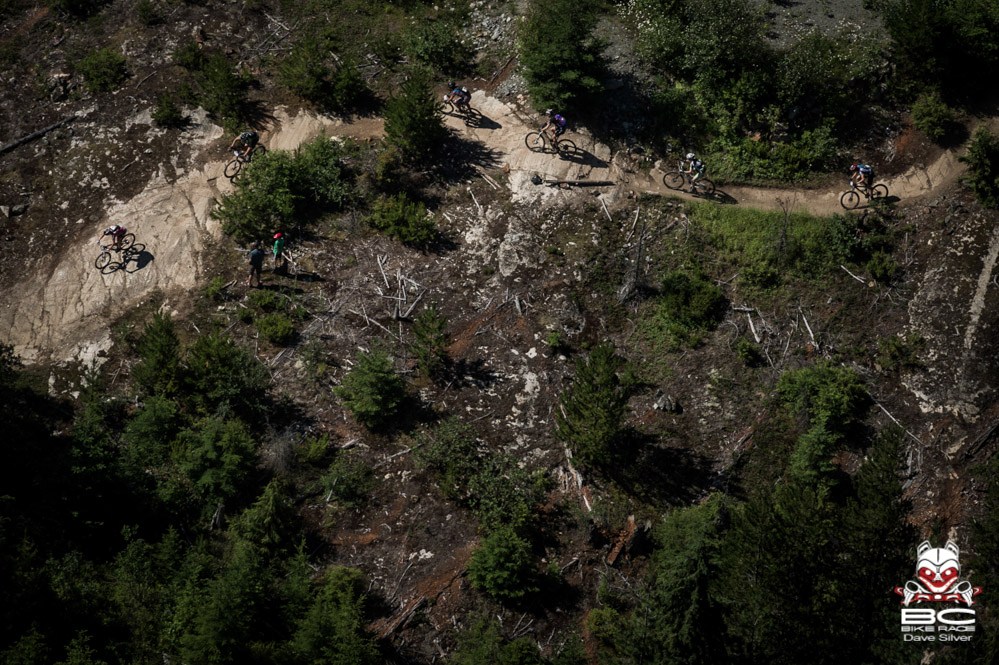 Rocky Mountain Bicycle riders Greg Day and Kevin Calhoun took home their first BCBR wins as a team after overcoming issues early in the week. Between Greg being sick for three days and Calhoun ripping off a derailleur it was work to bring it all back together. As locals they had a pretty good idea what they were getting themselves into. It was the first time at BCBR for the team from Craft Rocky Mountain who had to fly blind into every corner. “The fourth day was probably the hardest with the steep climbs under the power lines, but that’s what mountain biking is all about. You have to adapt to the conditions.” Christoff Listmann. For his teammate Michael Anthes “The BC Bike Race is great because it has a taste of everything you can do on a mountain bike. Including the bike park today which was awesome.” Third place overall went to the Ska/Zia/Trek team of Nick Gould and Miles Venzara from the USA. 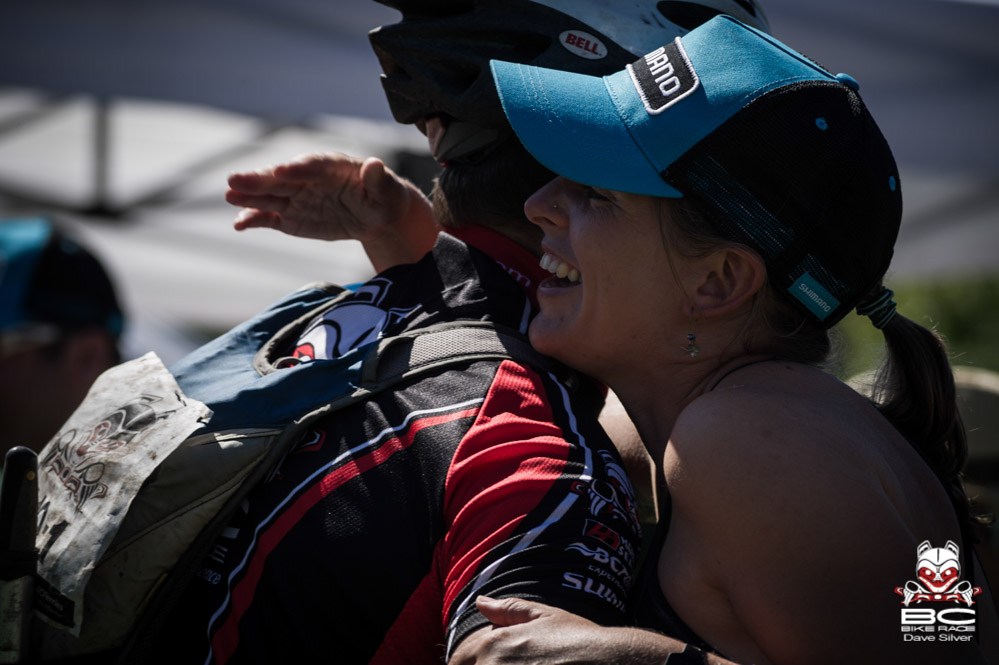 Behind by 1:59 on the GC a with only one enduro stage in Whistler it was going to be virtually impossible for Jaclyn Schapel (Liv/Giant Austrailia) to secure an overall win today. Unfortunately the tighter racing created more of a traffic jam than in previous stages and she ended up crashing trying to pass a rider who went left when she called right. Calling lines and passing cleanly in a race with all the international riders gets difficult when there are many different languages and accents. Schapel’s first experience with the BCBR has had a strong effect on her. “It was amazing, it’s been fantastic the whole week. It’s a great thing to be part of. I’ve really enjoyed the Enduro sections everyday. It’s pretty much like a boot camp, there is no alcohol [you can get it, BCBR just doesn’t provide it], you can’t go to sleep late, and you work all day.” She laughed. 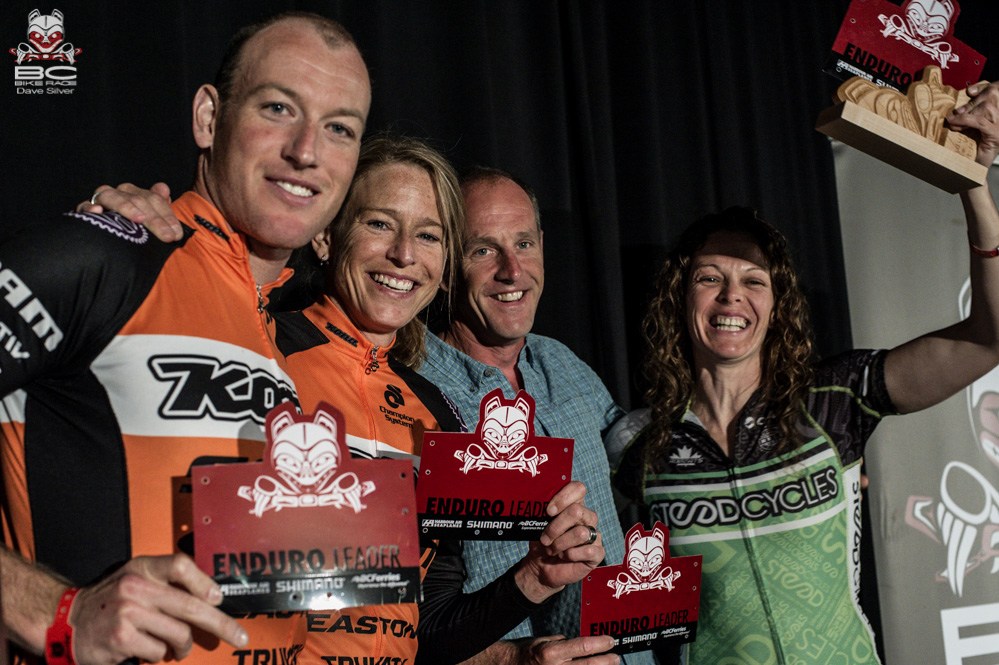 Enduro Champions of the 2013 BC Bike Race. The biggest shredders of the week.

Simms ended up winning the day and the overall by 2:21 after 13 stages. Schapel was only down by 22 seconds on the day despite being taken out by another racer and getting run over. She also secured second place overall, while Adrienne Miller (Team Adrienne) finished third on the week. Annika Bergman (Craft Rocky Mountain) was third today on the stage.

Kris Sneddon’s attempts to drop Neil Kindree combined with his local knowledge on many of the trails early in the week resulted in him securing first place overall on the men’s enduro podium. Second in the GC was Eric Goss (East Infection 2) who concentrated all week on the enduro’s and seemed to care less about the overall. On the third step overall was everyone’s favorite bearded man from Denmark, Erik Skovgaard (Racing29er). Over the week we got to see Skovgaard, like many riders, find his “A” game in the singletrack and by the last two days he was catching Paxson and Sneddon on the descents. “We had gapped him on the climb and held him off on the first descent and up the second climb but he caught back up to us on the singletrack which is amazing, earlier in the week he wasn’t riding as strong on the trails but now he has fully learned how to ride them.” – Paxson 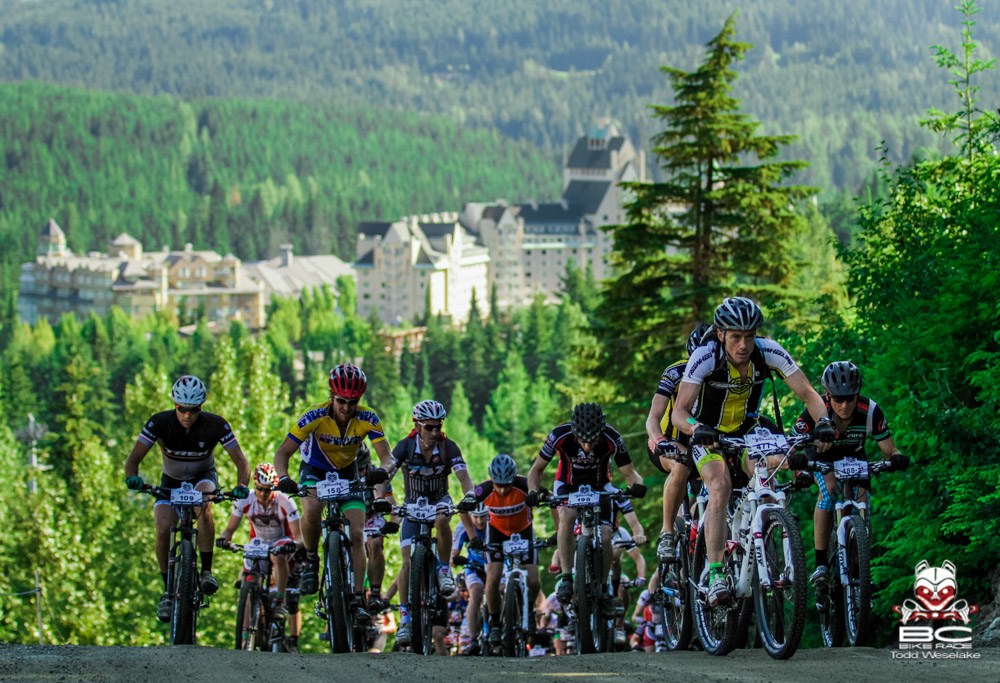 The initial climb out of Whistler Village was long and steep. Just another day in the BC Bike Race.

Another rider who embraced the enduro stages as the week progressed included South African, Oliver Munnik (White Knuckle Pinners). With a stage win in Squamish, Munnik really had the heat turned on. Without a few misfortunes in a couple stages he might have finished closer to the overall. 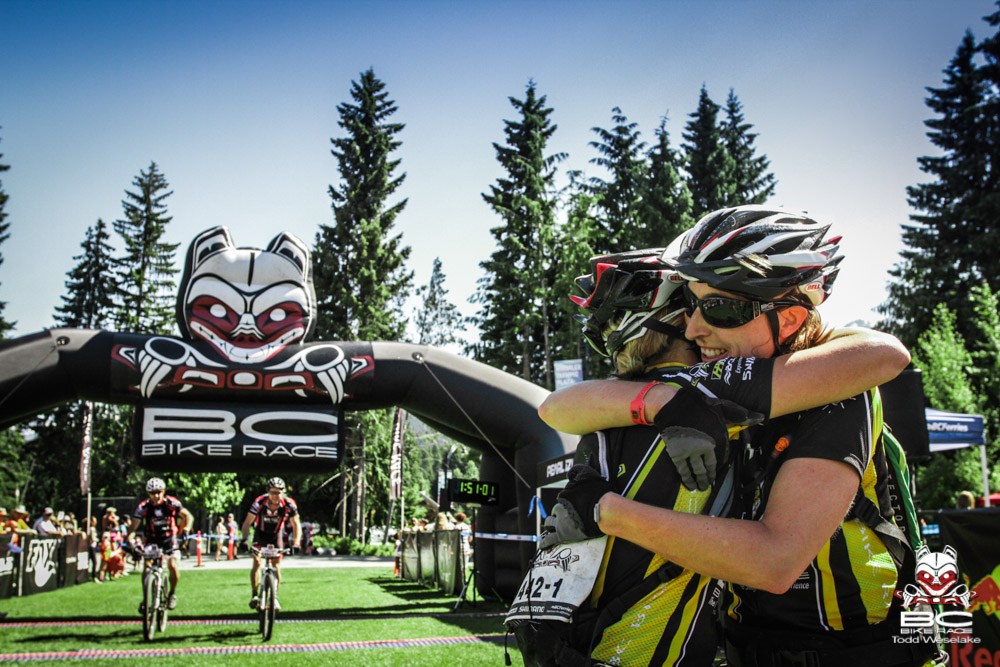 If you can’t hug your partner at the end of the seven days then you did not have a good week.

The awards banquet was full of freshly cleaned and scrubbed racers in the Whistler Conference Center and awards were given during the final group dinner with photos and videos presented by the BC Bike Race media team. Riders mingled and enjoyed the last opportunity to see each other for at least another year if ever, but strong bonds have been formed during the week of shared experiences and the banquet provided the perfect opportunity to have a last goodbye. The emotional highs and lows were already fading but the overall memory of an incredible experience will carry on for the rest of their lives. “There was life before BCBR and there is life after. It’s changed how we approach the world.” Erik and Dominic from Denmark