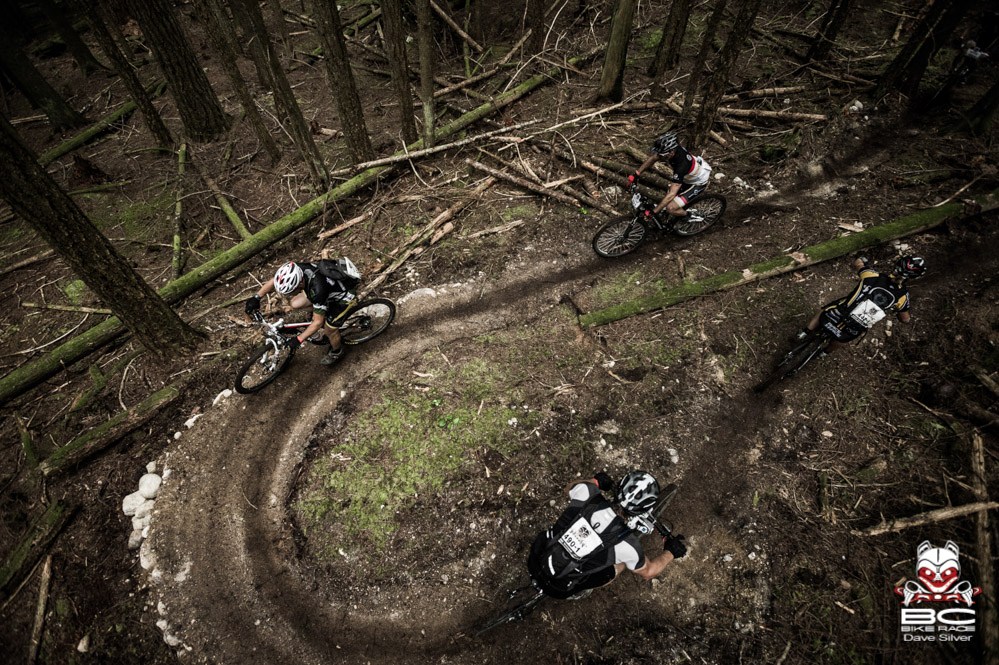 Gotta have some arms to reach across and highfive your friends on this one.

If yesterday was holding court with the Queen Stage, Day Five Presented by Rocky Mountain Bicycles was a chance to dance with the Jester. What better way to lighten the mood than to give riders a 12km descent to the finish at the BC Ferries Terminal in Langdale. Every ounce of British Columbia spirit was built into this section of trails. Grab a partner, make a train, go it solo, silent passes, gap roots, double the double, pump the berms, roost some loam, cook a tight left with a soft drift right. These are the moments of a day on trails like HWY 102, Sidewinder, and Sprokids. Standing in the woods watching for riders, the first thing you’ll hear is a chorus of whoops echoing through the trees before the bikes slide bye with a grin floating above. This is the gold people come to the BC BIke Race to find. 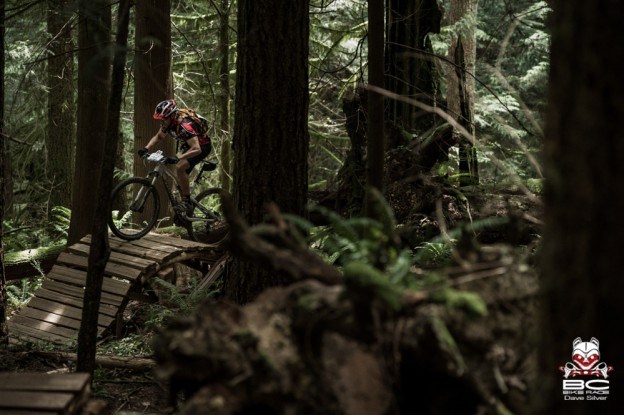 A little fun in the Sprokids trail.

Jonas Vuille of Switzerland came to the race alone, riding a hardtail, wearing no socks. He currently sits tenth in the Open Solo Men. When asked what motivated him to come here it was because he “wanted a bike holiday, and someone told me there was a lot of singletrack here and it was true. I enjoy this race because I have my time I ride as fast as I care, but no stress. Sometimes I kill myself to follow someone, sometimes on singletrack I’m alone, no one in front nobody behind, and I get really lazy and I only follow the flow and it’s really nice to do it like that.” 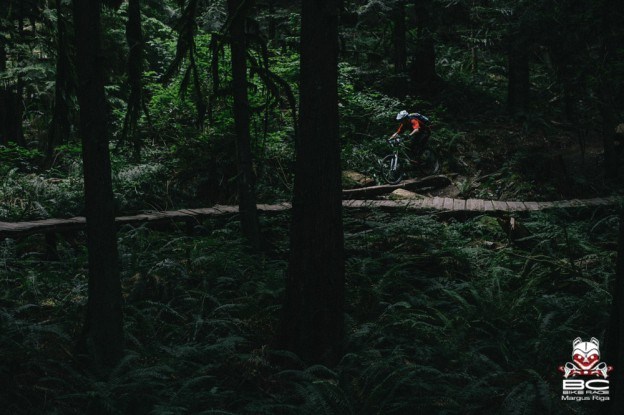 What happens when you return from the wooden forks in the woods?

The Sunshine Coast bid farewell to the racers with one last departing gift in the form of the shortest stage of the week so far and some of the most consistently voted favorite trails of the race. New trails on the climb were still soft from the most recent work getting ready for race day. All the 1300m of climbing was done by the 28km mark and the first enduro commenced at 7km down of HWY 102. Trees with thick bark and dense moss watched over racers as they swooped in and out of the beautifully cut trails. Some rocks, a few roots and lots of directional changes made the flow easy to find but a challenge to steer straight and not overcook the corners of the trails.

The Race: Open Women
It was a day for racers and riders to push their limits for fun and overall positions on the general classification. It’s no surprise by now that Wendy Simms (Kona) held onto her stage winning streak. Kim Hurst (Mud Cycles) put in multiple attacks but the singletrack descents were too frequent and Simms trail skills always brought her back in touch. “She was charging hard up every single hill and dropping me and I kept catching her on the downhills or the technical, and one time it was a rocky downhill and she just pulled aside and stopped. She’s pulling plays out of my book that she just figured out a couple days ago she’s definitely pulling them out and smacking them down at me. She’s a quick learner and a great competitor.” Simms. “It’s always good to see someone with heart not giving up despite having odds against them. There are still two days left and if she keeps playing the game to win, her day might be sooner than later.” 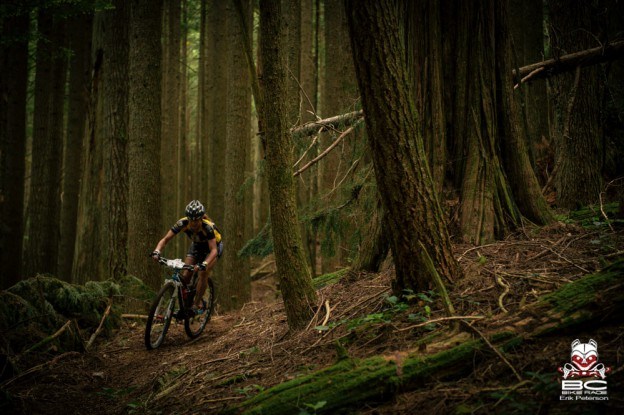 Canadian Trish Grajczyk (Deadgoat Racing) is still sitting in a relatively comfortable third, but Annke Bergman of the Craft Rocky MOuntain Team from Switzerland has to keep her eye on Kari Bratveit (TVK) of Norway who is only 10 minutes behind.

Open Men
The last two days of the race are heading to the home trails of Neil Kindree (Specialized Corsa) and that’s where last year’s BCBR winner really put his stamp on the race. That fact isn’t lost on race leader Kris Sneddon (Kona) and he took the opportunity to take another 15 seconds out of Kindree within the last two kilometers after being alone together since the halfway point. In a similar fashion to yesterday’s ending Sneddon attacked on a 100 yard section of eroded jeep road with baby head sized rocks obscuring any real line. “I think I’m good at plowing through the nasty, not fun, you can’t really pick an actual good line, sport of bike riding.” Sneddon said with a little laugh. This rider has been dropping in behind the leaders on the enduro stages and can say he is good at riding all pieces of trail. “It was a tough day. He attacked fully. He attacks properly, he has a nice snap.” From watching Kindree in the past it will be interesting to see how the race unfolds tomorrow. Expect to see more punches from Kindree. 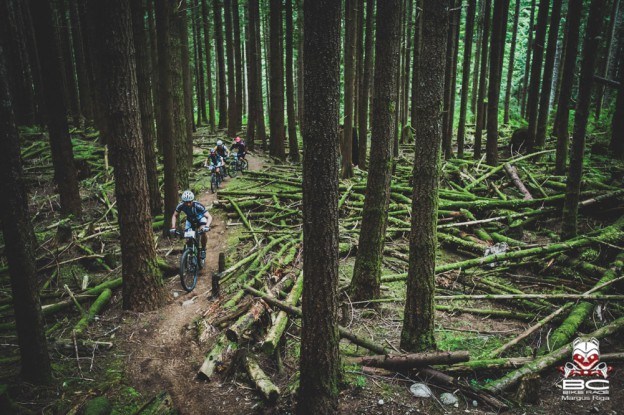 Despite the close race between the top two spots the only podium positions actually changing hands are the third through five places. Today Spencer Paxson (Kona) took back a third position he lost yesterday and Erik Skovgaard (Racing29ers) stayed in fourth but is only 2:27 back and has already proven that he can beat Paxson. This will be a battle to watch in the last two days of racing.

Enduro
Last year’s enduro winner Andreas Hestler (Rocky Mountain BIcycles) finally found his legs today after a week long stint acting as racer, media coordinator, and general race cheerleader. He wrestled both enduros to the ground on the freshly released Rocky Mountain Instinct that was released the day before the start of the BC Bike race. With 130mm of rear wheel travel he smoked the longest enduro stages of the week. I asked why he would ride a bigger travel bike for a week of racing not centered around enduro when an Element would probably be easier and lighter. “I really wanted to highlight the enduros in the race this year and it seemed like a good idea to ride a bike that could get me to the special stages comfortably even if it was a little heavier, just to have the right machine when needed. I rode cross country rims and tires but the extra suspension really made it fun.” On enduro two of the day Sneddon and Eric Goss (East Infection 2) tied for second behind Hestler and now Goss sits third overall behind Sneddon and Kindree in the overall. 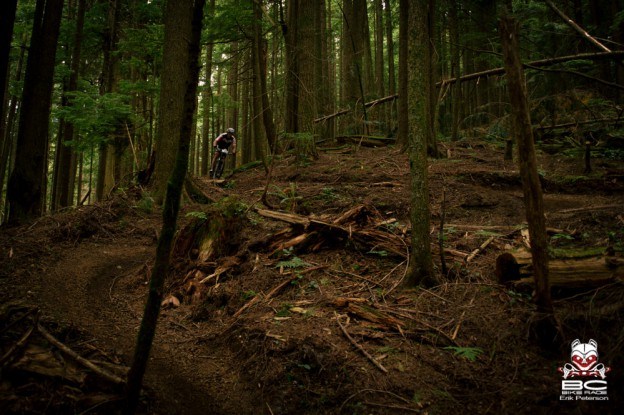 Two corners at speed. Can you guess how different the front of the pack looks going through this versus the mid-pack riders?

In the women’s department Wendy Simms won’t put the top spot back on the rack for someone else to take. Jacalyn Schapel (Liv/Giant Australia) was left with the second spot both times but only six seconds behind in the last enduro of the day. Third place spots were exchanged between Adrienne MIller who took third in the first section while Claire Garcia-Webb (RCBC) grabbed third in the last section.

Open Men Duo
Kevin Calhoun and Greg Day of Rocky Mountain Cycles have returned to the race with hammers in both hands after two initial stages of hardship they now have a 32 minute lead over the Craft Rocky Mountain Team from Germany, Christoff LIstman and Michael Anthes. Paul Newnham and Oliver Young of CLIF Bar UK took the second place podium spot for the day in a solid effort on the short stage. 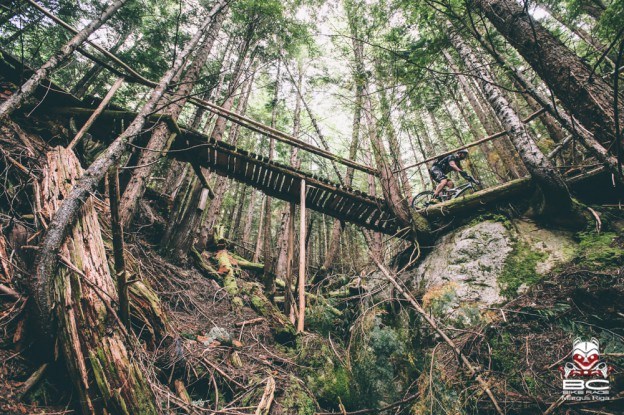 Solo Masters Men
Only 23 seconds separates Peter Knoop (Motor Mile Racing) and Matt Shandro in the Solo Master’s category. Each day the two exchange leads and this race is gonna be taken all the way to Whistler. Ian Smith (MIVA) was number two on the day and only a second up on Knoop as they sprinted for the line. Keeping it this tight into day five is probably a lot more stress than anyone expected but it it’s always fun to have a fight worth scrapping for. 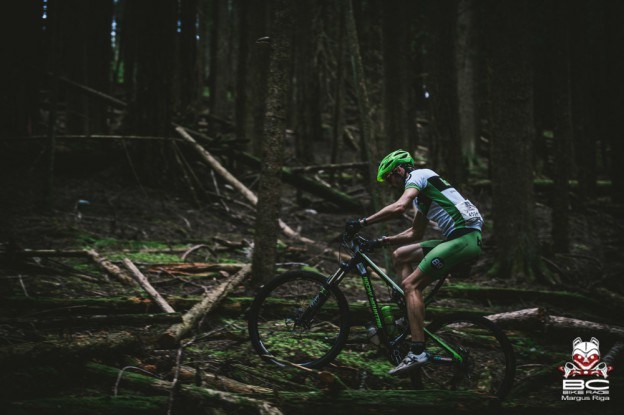 Solo Masters Women
Cary Mark of Steed Cycles has a grip on first while last year’s challenge winner Jenn Mcrae (787 Racing) has stepped up to the Epic Category with style. A second place step is only two days away if she can keep her body and mind healthy. Third place is firmly being held by Susan Prater of New Zealand.

Day 6
Squamish hosts Day Six presented by Shimano. At 48km and 1783m of climbing it’s sure to test the stamina of a few riders. Fortunately the rewards come in the form of trails like the now world-renowned Half Nelson, a purpose built trail like none other. It’s Kindree’s home town and he will have had a good night’s sleep so expect him to charge hard to defend his title from last year. Despite its length, the Squamish stage is often tied with Whistler as the riders’ favourite.

The end is in sight for BC Bike Race competitors but Squamish will not be a pushover on Stage 6. Complete results for all stages including the Enduro sections can be found here.