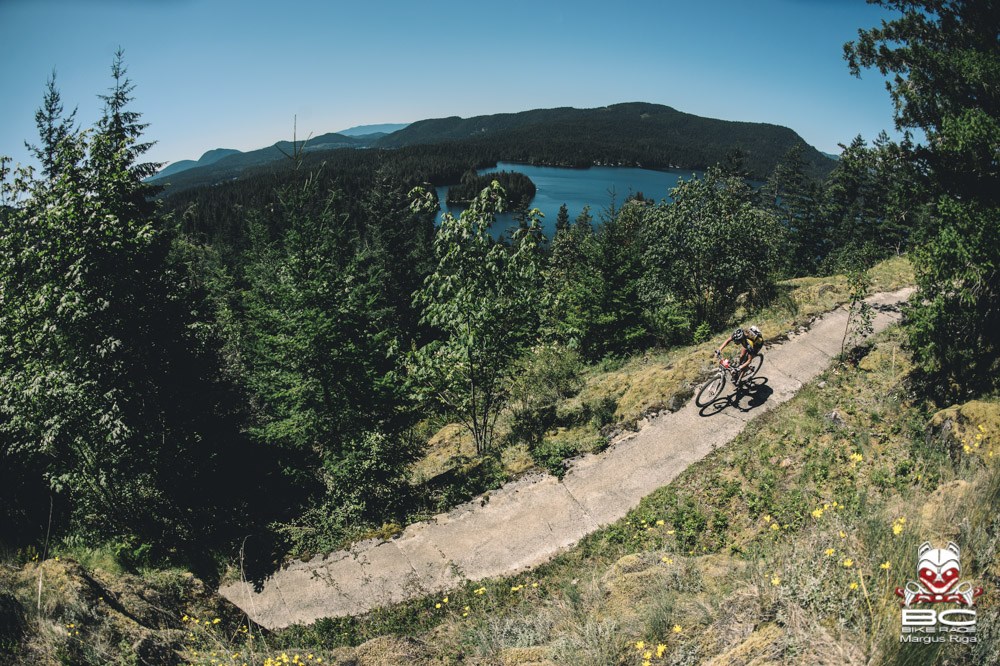 Wendy Simms (Kona) holds the Solo and Enduro overall. Jaclyn Shapel (Liv/Giant Austrailia) is closing in after today at 1:27 back.

Day Four Presented by Ryders Eyewear of the BC Bike Race has rounded its corner while continuing to soften the hard edges of the riders. The BC Bike Race woke early for breakfast and a transition to the Saltery Bay BC Ferries Terminal where most riders jumped on a ferry to Earl’s Cove. The ferry that runs from Saltery Bay is too small to move the entire race so some riders split off to take water taxis or the seaplane provided by Harbour Air. The plane flies over the deep fjords that lie between the racers and the southern Sunshine Coast delivering them to the start. The plane ride was on an aircraft that took off and landed on water which is entertaining in itself without the bonus of a view as the pilot banks across the water through the mountains. Today was a kick in the pants for anyone who thought it was going to be a promenade to the finish line. Riders got a bonus 500m of climbing on top of the 1500m due to a mistake in the final profile of the Racers’ Bible. It didn’t seem to dampen peoples’ spirits and as a spontaneous bonus Shimano gave a pair of XT Disc Brakes to the last rider if they made it in before 8:30pm. Tracy Kendrick came in at 8:28:27 followed by Brett Tippie, his bullhorn and the sweep motorcycle. 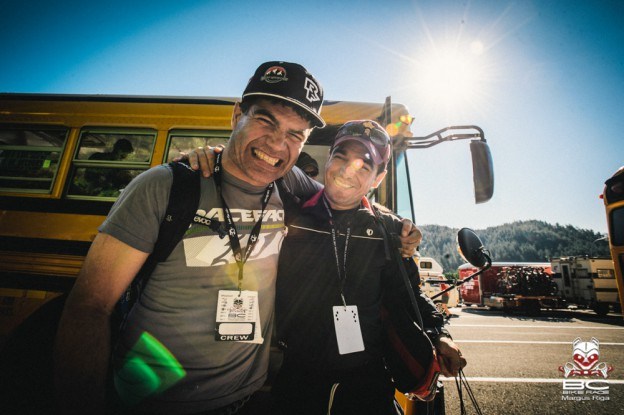 Maybe we can get a “Tippie Tandem Challenge” for next year?

As much as the BC Bike Race likes to promote the ride and not concentrate purely on the racing, it’s been hard to ignore the very competitive nature of the event at the front of the pack this year. In many categories there are good battles happening amongst riders who are enjoying having the opportunity to push their limits against not only the terrain but each other. Racers from around the world are coming together and sharing the competitive spirit that results from spending time with friends who can push each other without actually resorting to shoving each other.

Women’s Open
Wendy Simms (Kona) might have won the stage today but she had to work hard to shake her New Zealand pursuer Kim Hurst (Mud Cycles). Hurst held tight enough to only be back by 1:25 at the end of the almost four hour day. Simms still has 12:37 on Hurst going into the last three stages so it’s looking to be a tough challenge ahead if Hurst has any hope of making it happen. Maybe a stage win is in her future.

“Kim went out super hard, really hard. I’m pretty sure she wanted the stage win.  I tried to keep her in view but didn’t catch her until about 22k, then I tried to drop her in the single track and she’d catch me on the hills. She came back from the dead like five times. I only managed to shake her after the two enduros. She’s really fun to ride with.” Simms 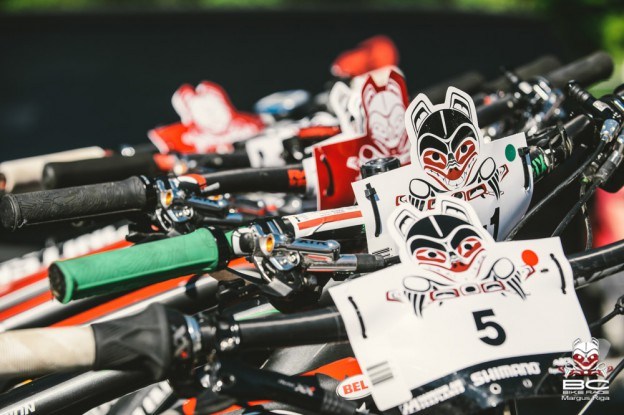 BOB (Bear on a Bike) is along for every ride.

“I went hard before the singletrack Cabin Fever, because it’s pretty steep, it’s pretty rooty and it’s technical. I thought that like 9 times out of ten he would want to be the first person in there and put in an effort. I had to ride hard enough he wouldn’t want to come around me. Kinda had to gut myself.” Sneddon

It was the day to go it alone as he left his Kona support team behind. At the top of the climb before the first Enduro stage of the day Sneddon led with his jersey open trying to stay cool as he punched it up the steep gravel sections. Unable to really push it after such a hard effort both riders stayed together until the second Enduro another 5 km down the trail. This time Sneddon took advantage of the more technical terrain and not only put a sizable 1:07 gap on Kindree by the line but he took the win for the enduro stage too.
The lack of course knowledge and a little dehydration might have done Kindree in.  “I cracked pretty hard there at the end, I had not enough water I guess. Was feeling a little dizzy and woozey. ” Kindree ended up with an IV at the end of the day. The Squamish native might have better luck on days five and six when the race returns to trails and a community closer to him. 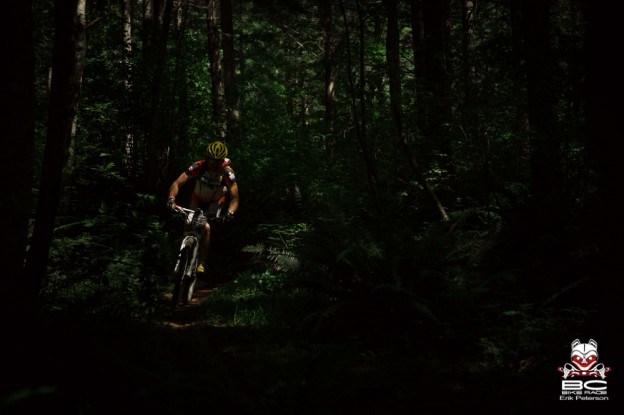 If I said it looks like it could be Pennsylvania, would I be wrong? Either way I’m a fan.

Erik Skovgaard of Denmark and Racing29ers, battled back for a third after a fall into the bushes that resulted in him being a little disoriented and he got back on the bike going the wrong direction for a minute before he realized what he had done. He had to chase hard from the Cabin Fever Trail to the stage two Enduro.  Again Skovgaard proves to be a tough competitor taking the third podium step and at the end of the day he also earned the third spot in the general classification. 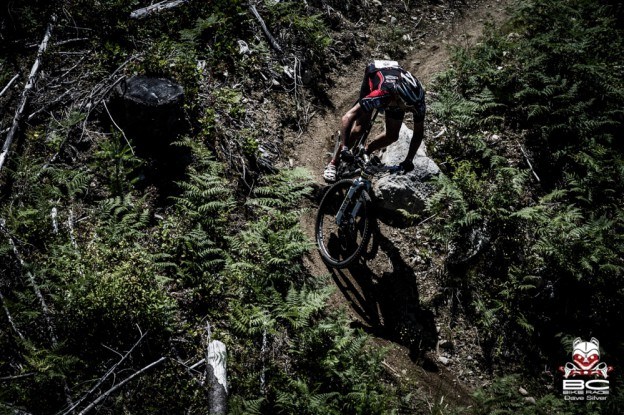 There are a couple left turns in the BCBR.

Solo Masters
Solo Masters Men saw a big shakeup today when MIVA rider Ian Smith of Canada took the win but it is Peter Knoop (Motor Mile Racing) of the USA who’s second place earned him a first place in the overall. Previous leader Matt Shandro (Team Matt) lost seven minutes on the day and will be pushed back to second overall. The gap between the two riders is now a slim 1:32 after four days of racing.

Team of Two Duo Open Men
The Rocky Mountain Duo team of Kevin Calhoun and Greg Day pulled back into the lead of the Team of Two Duo category by over 12 minutes today. It was a stamp of authority over a race Calhoun is not shy of saying they came to win. The team has overcome many obstacles so far and their frustration at how the race had been unfolding for them was turned into a motivated, successful attack on the queen stage of the race. 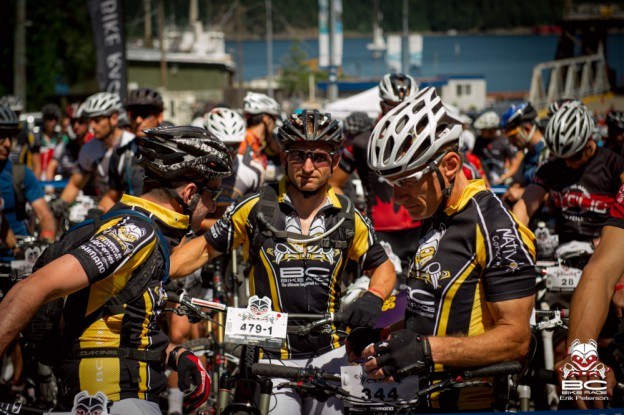 Leaders of the Men’s 80+ Duo and Ted Russo, Veterans Leader

Teams of Two Open Mixed
Anke Dannowski and Felix Breske (kivel:o) who are leading the Teams of two Open Mixed suffered two flats and a broken chain today but still managed to take the win. Veterans of three Trans-Alps and two Cape Epic stage races this duo has a pretty dominant lock on the overall.
“Two punctures and the chain got into the spokes. Always we catch them and then the next technical. But in the end we always caught them.” Anke
Olivier Blain and Sophie Poirier (Ours Prudent) are doing their first stage race together and seem to be enjoying the challenge of the competition. 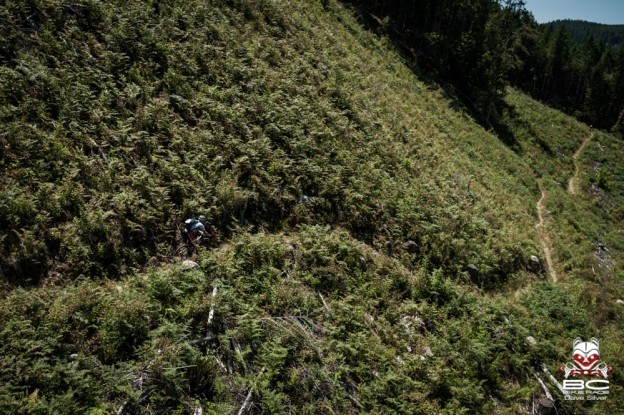 I usually think of a staircase for going up.

Teams of Two 100+ and 80+
Teams of two 100+ has a battle going for second and third place. First place team Tam Bikes (Den Satake/ Chris Urban) have a comfortable but not certain lead of 26 minutes over second place team Happy 50th (John Vipiana/ Doug Ott) and Cento Uno (Dwayne Brown/ Eric Trouillot) who only have four minutes separating them. 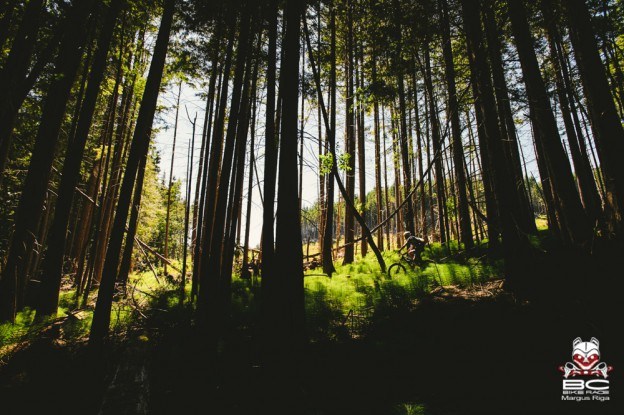 Tree harvesting on the coast.

The Enduro
Sneddon and Eric Goss are still exchanging Enduro wins, with Goss taking the first  of the day while Sneddon used the second to motivate an attack on Kindree. In the Women’s Category Wendy Simms and Jaclyn Schapel (LiveGiant Austrailia) exchanged stages also. Jaclyn took the first and Simms was in the front on the second. We can speculate the extra climbing in the second stages gave the benefit to the XC leaders. Or we can think they are both excellent riders! 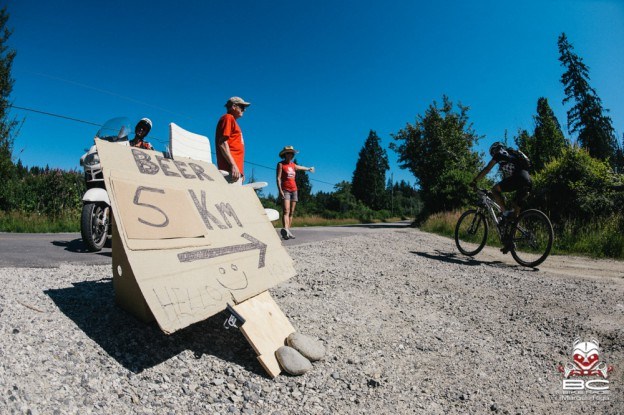 They still have beer in Canada.

Stage Five Sechelt to Langdale
Another day of big climbing is in store for the racers tomorrow with 1,328m of ascending in a relatively short 36km. Some of the most popular trails of the race like Hwy 102 will be begging riders to feel their flow before the final 8 km descent into the Langdale Ferry Terminal. Riders will end their day with the last ferry ride of the race. The evening will end in the town of Squamish at the Brennan Park Rec Center underneath The Chief, a solid wall of granite that overlooks the town and plays a large part in the lore and outdoor lifestyles of the community.

Interesting to note that the Enduro stages are starting to factor into race tactics for some of the riders. An unexpected 500m of climbing sounds filthy – we’re betting some extra beers were earned during yesterday’s stage.

Good one. I remember this being one of the hardest stages…. I could only imagine what it was like in the heat.