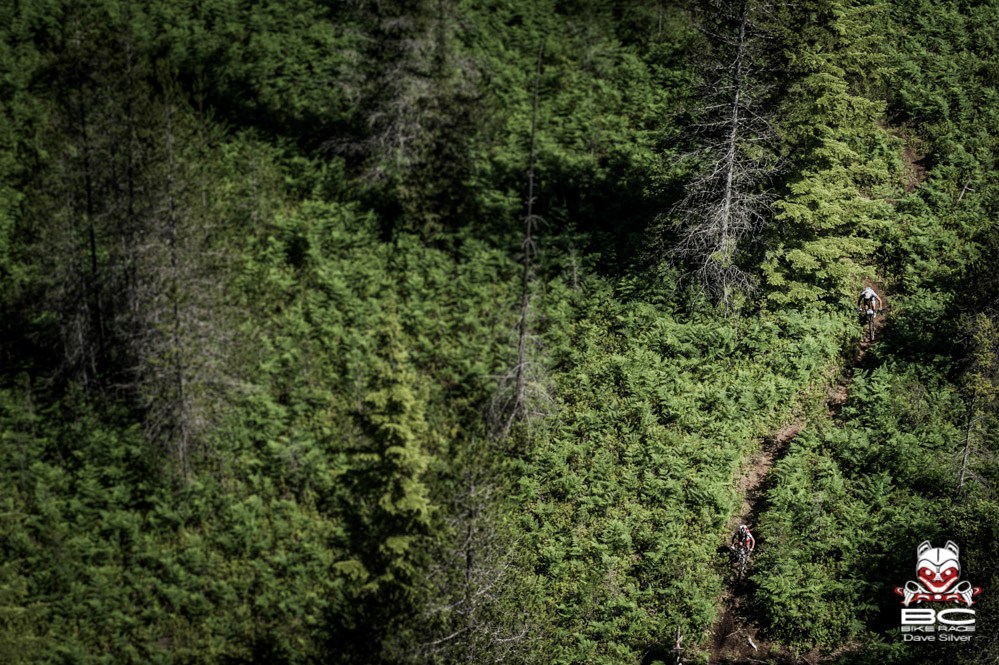 Car wash through the BC bush.

Day Three presented by Harbor Air, the founding sponsor of the BC Bike Race, has officially landed on the Sunshine Coast. Even though the host town Powell River is technically connected to the mainland, only a boat or seaplane is gonna get the race here due to the rugged terrain and two deep fjords. Once home to the largest pulp mill in the world, Powell River today played host to 550 of the world’s most adventurous mountain bikers. Stage three introduced riders to a complete study of that decomposed mixture of vegetation and dirt called loam. With only 755m of climbing riders had an opportunity to rest the legs for the ascents coming in the later stages, but it was the upper bodies and a rider’s line choice that were tested by the unique style of trails hidden in these dark forests. 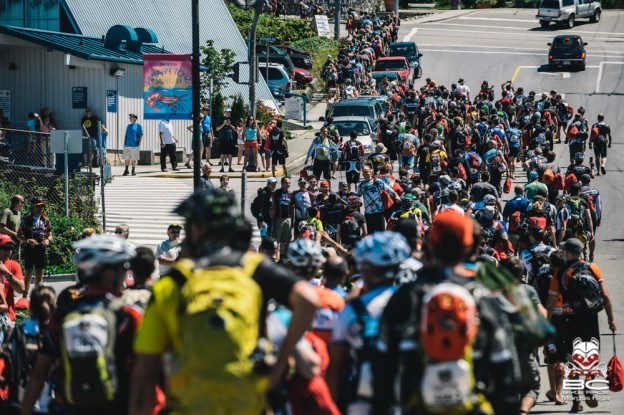 Exiting the ferry into Powell River.

Some people are on a riding vacation, but today’s winner Neil Kindree (Specialized/ Corsa Cycles) isn’t concerned about the scenery. This is a race for proof of local dominance. He finally got a stage win by putting in a late attack that stuck. He only managed to pull back 29 seconds from overall race leader Kris Senddon (Kona), on a 58 second deficit. A place like British Columbia proves that trail skills and an engine are important and both riders have each quality in spades. “Kris strung it out in the first enduro, but I managed to get a gap on the fire road. When I saw I had about 20 seconds I decided to just keep going for it.” was how Kindree described his move. The stoicism of Kindree can make it hard to gauge his level of excitement but he is known to keep his game plans close to his chest. An attempt to learn more about his day and how he sees the race progressing was met with a quick “It’s confidential” and a smile. 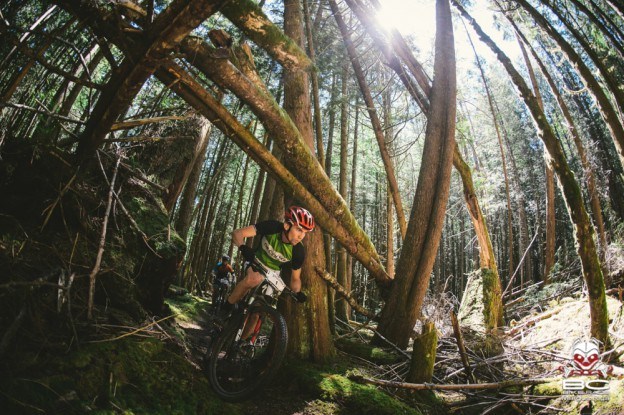 One standout rider in the solo men’s category today was Erik Skovgaard (Racing29er) of Denmark who sprinted to take Sneddon at the line for 2nd place. Despite his homeland being relatively flat he is quickly adapting to the roots, rocks, and loam of the BC Bike Race. It turns out his loss of time in stage two was due more to a soft rear tire than a low tank. If Skovgaard keeps this pace up he might soon be sitting much closer to the podium than anyone thought. Overall the men’s top five shuffled quite a bit today with third, fourth, and fifth moving around. Matt Hadley of team Xprezo put himself in third with a strong ride today while Skovgaard’s effort pulled him up to fourth. Spencer Paxson drifted back to fifth after loosing some momentum later in the race despite hanging with the leaders through RedBull Enduro 1. 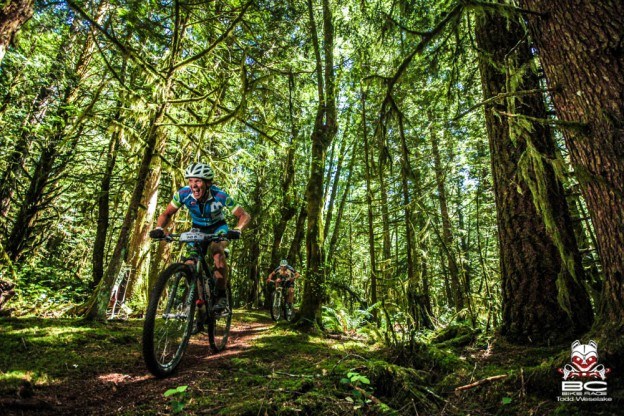 In the women’s open category Wendy Simms (Kona) continues to curate a cautious dominance from the front. The second place and cheerful New Zealander Kim Hurst (Mud Cycles) hasn’t let the time back bother her and her love for the trails is showing through. Hurst was just under four minutes back today while third place finisher Trish Grajczyk (Deadgoat Racing) keeps her time behind Hurst at a minor threat level of only a couple more minutes. A misstep by any of these women could quickly erase any time cushion they have slowly been building over the past three days. 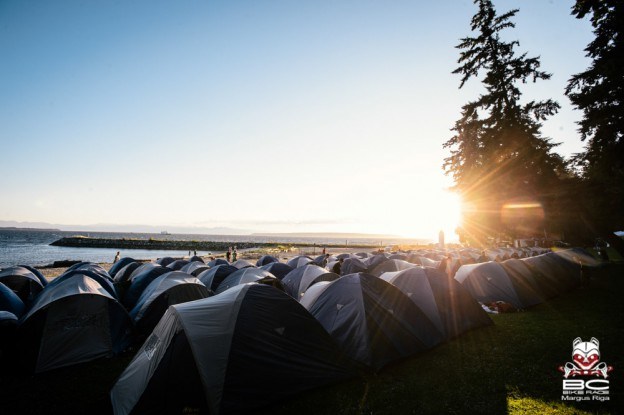 Powell river and it’s beach are a highlight of the race.

One category that has a long history of hard fought battles is in the Team of Two Open men. The BC Bike Race was originally conceived of as a team event and the first few years you had to have a partner to do the race. Today was won by Rocky Mountain Bicycles riders Greg Day and Kevin Calhoun and in the process they earned back over four minutes of their 9 minute deficit to German BIke Magazine riders Christoph Listmann and Michael Anthes. Last year Day and Calhoun were on different Rocky Mountain teams fighting for the same podium steps. For 2013 they have been struggling together to have a stage without mishaps. Greg started the BCBR with a stomach virus and spent most of stage two being sick in the bushes, but it was Kevin’s destroyed derailleur hanger towards the end of that stage that really put them in a deficit to the current overall leaders. Despite being less than 100%, Day and Calhoun have started chipping away at the lead of the two Germans today. A major element of success at a stage race is to keep the mind and body healthy and to try and do that with a teammate makes the team’s success twice as difficult. It’s part of the bonding experience; to watch yourself or your partner suffering and to either have to be the caregiver or taker. It’s one thing to quietly absorb your own lows and difficulties but to do that for a partner isn’t easy on either teammate. Calhoun and Day have known each other for years and it shows in their teamwork in every stage. 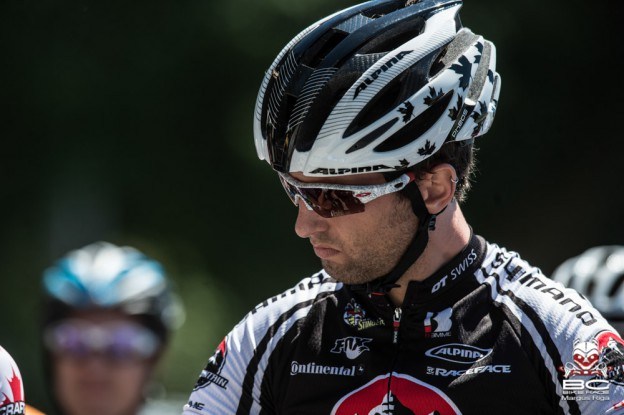 A sick partner and some mechanicals have held back Rocky Mountain duo team riders Kevin Calhoun and Greg Day.

This is the third year of the RedBull Enduro “Race within the race” at the BC Bike Race. Designed to give riders with a different skill-set an opportunity to show-off a little to their fellow competitors who crush them on the climbs but are weak in the technical. The Enduro is drawing out new riders and changing some of the bike set-ups that are brought to the race. Last year maybe 10-20% of bikes were equipped with dropper posts while a quick walk around the bike pits this year reveals a split much closer to half. Fox Racing Shox showed up this year with a van and a load of their dropper posts to lend out to riders who are looking to try one. With bikes designed more for enduros it’s only natural that riders are arriving with the skills suited to the race. 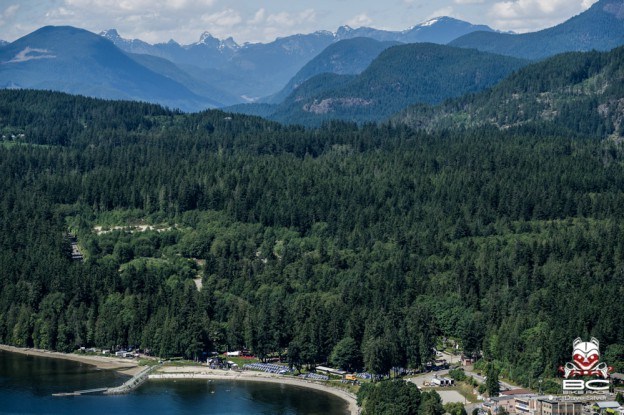 Those mountains in the background help isolate the seaside community of Powell River.

Austrailian Jacalyn Schapel (LiveGiant Austrailia) who was leading the women’s enduro category going into today’s stage isn’t even on the radar for the women’s overall. An enduro and super-d specialist in her home country, Schapel came to BC because of the reputation of the stage race for having excellent trail. “Having the enduro in the stage gave me something to look forward to and breaks it up and it is good to have a carrot to chase.” We hope to see Schapel rip up the enduro stages all the way to Whistler. 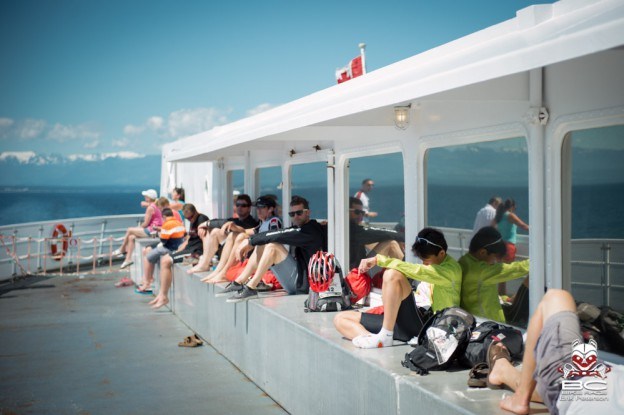 Find a moment to rest when you can. The ferry ride to Powell River.

In the men’s category Kris Sneddon is holding on to the top spot but it is riders like Eric Goss (East Infection 2) who is in 5th place on the enduro category but 37th in the general classification that are fully embracing the opportunities the enduro category is providing. As the week rolls on and new friendships develop, the enduro gives riders an extra opportunity for some friendly competition. It’s another topic for conversation to fill the afternoon while recovering for the upcoming stage. 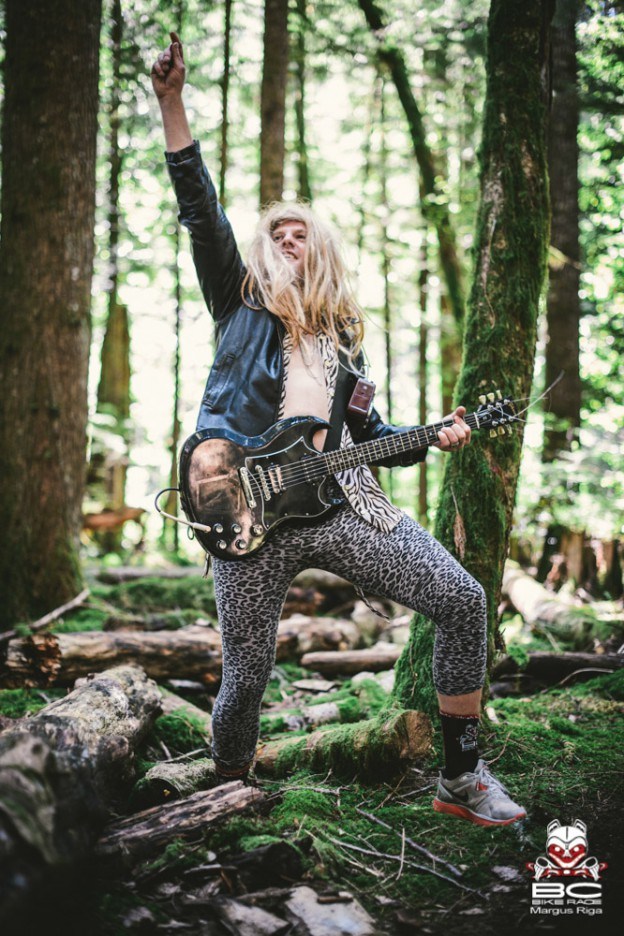 Insert own caption. We’re at a loss.

Day Four Presented by Ryders Eyewear leaves from Earls Cove after an early ferry ride. At 61km it’s the longest stage of the race and it has climbing to match. Fortunately the Klein Lake and Ruby Lake Trail Networks will keep the riders minds entertained. Some lengthy enduro stages are coming up so expect to see a lot of shifting in categories at the end of the day. Beautiful weather is in the forecast and the groove of the BC BIke Race is kicking into high gear as the racers are finding their comfort zone in the traveling circus that has invaded the Sunshine Coast. The race is nearing it’s halfway point and riders are starting to understand the reality of what this new world is they have thrown themselves into.

Where’s the bacon handup station? We think that should be a daily occurrence.

We were long weekending, Craig. We'll have 'em up from here on out.

Great summary of the race day, but what happened to the articles for Day 1 & 2?